For this weekend, we had to make a choice between going to George, WA for the Rock n Ride, or Silverton, OR, for the Petal Pedal. Both would require a hotel and were towns we’d not been to before, and both were close to wine country. Silverton was about 1.5hrs further, but it was all on I5, whereas George would have taken some smaller highways.

I came to make the decision, as I was fooling around on Priceline. I made an error and selected the lower grade rooms and of course my bid was taken. Luckily I didn’t pay more than the room cost normally, but I had to worry all the way down there that we’d be in a bedbug infested place. Once a bid is won, and you are given the hotel information, you cannot get your money back. So our decision was made, and I quickly went over to the ride web site and registered.

We left Friday afternoon, and figured we’d be there about 9pm but we encountered one traffic jam after another, starting in Bellingham and following us all the way down to Portland. We ended up getting in at about 11pm. I was so relieved to find the motel, though older, was actually well looked after, and even kinda pretty. My first aggravation is that they charge a $1.50 fee for use of the safe, which you can have refunded the next morning if you don’t use it. My second aggravation was waking up the next morning to find out that the office didn’t open until 7am and we had to leave at 6:30. So no breakfast and no safe refund. 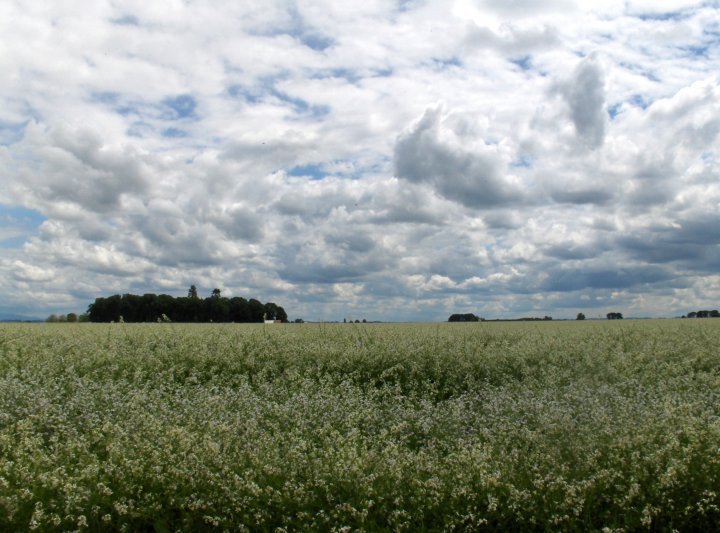 We headed out into the country, following the directions I had received from Google Maps, and got to the Oregon Gardens, in Silverton, in plenty of time to have breakfast, which was included in our ride price. They had all sorts of samples of power bars, gels, candies and drinks and the bike repair guy gave us little boxes of tube repair items. It was like being a kid in a candy store.

This wasn’t a timed ride, so we were free to leave when we wanted. It was a little overcast outside but there was no rain at all. We headed out, going up, and up, and up, into the countryside, along with 1,000 other riders. The first rest stop was at the quarter way mark, on the side of a big hill. The view was wonderful, with the valley laying way below us, and it felt so great to be able to look down and know we had just cycled all the way up here. 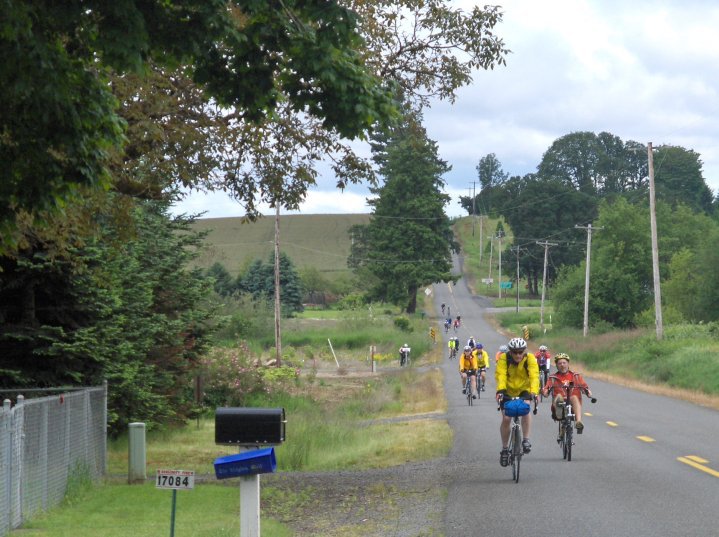 People who do these rides typically have small, light, road bikes. They’re flashy, weigh next to nothing, and go like hell. Our bikes tend to get a lot of notice. As we were starting we heard a guy say to another “Those are touring bikes!” and it feels like every third person either asks us what kind of bike we are riding, remarks on how well we do on “those” bikes, or asks how we can handle doing a ride like this with “those heavy bikes”. In some ways it frustrates me, knowing we’d be so much faster if we’d opted for road bikes, but really we want the freedom of being able to be self supported, to be able to carry all our gear with us on long and short trips. Besides … another year we can buy the road bikes, maybe even a tandem! Everyone needs at least 3 bikes! 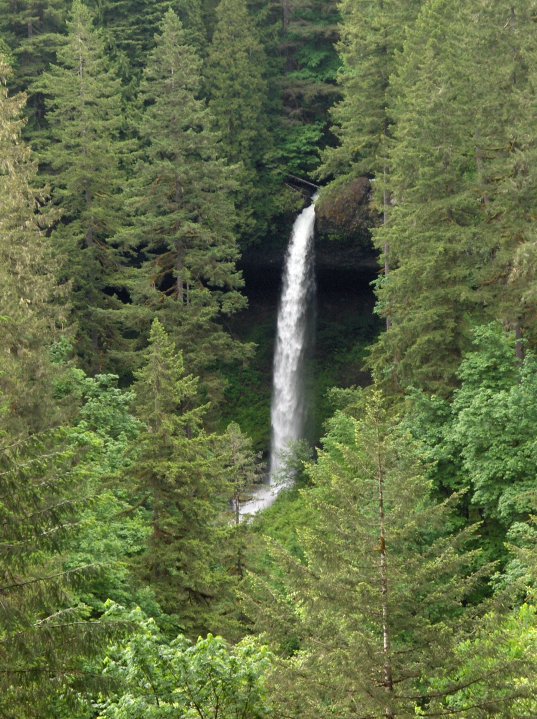 On and up we went, for the first 50km, into Silver Falls State Park. The actual falls were just beautiful. Pretty much everyone had to stop for a picture break. Then we had a wonderful 8 mile downhill plunge to the next rest stop. It was a wonderful bit of fun and well worth the previous climbing.

The second half of the ride was more flat, through the rolling hills of the Willamette Valley. We rode alongside all different sorts of smells, both pungent and attractive. A man wearing a big red maple leaf jersey raced past me and I wanted to catch up and show him my maple leaf socks, but I restrained myself. It was hard not to stop at wineries we past by, and the hardest place to pass by was a farm shop where they were selling home made strawberry shortcake with local berries, cream and cake! We pushed on, and were happily rewarded with the same strawberry shortcake at our next rest stop. Funnily though, it was the watermelon I enjoyed more. 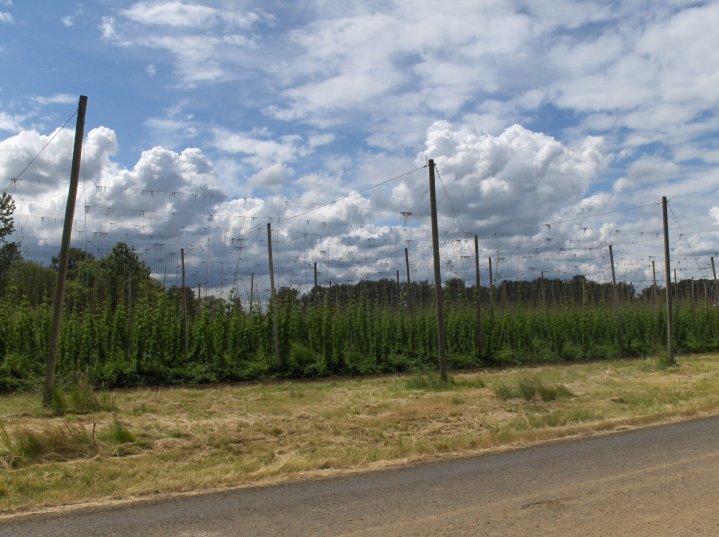 The thing I hate about valley rides is that we always get head winds, and they always turn on us, rarely do we get a tail wind. The last quarter was like this, all head wind, but the sun had appeared and it was truly beautiful so we rode on back to the Oregon Dinner for the salmon and microbrew beer we had been promised. Unfortunately, I didn’t enjoy the salmon as it was rather cold and I really would have preferred wine. We stayed for one beer and then decided to leave to go on up to Portland.

I’ve never spent anytime in Portland, just driving through on the highway to somewhere else, typically in pouring rain. It was a nice surprise to drive into the downtown on a nice sunny afternoon and find a festival going on. It looked like Mardi Gras was happening. I was wishing I’d made a Priceline bid for a room somewhere, as the few hotels we went to were already full. After a walk through the city, we decided to drive on, back as far north as we could make it. I believe I fell asleep somewhere around Olympia and Harold got us back to Everett before he just couldn’t go on any longer and we checked in at a cheap, roadside chain motel for the night.

The next morning we got up and drove back to Birch Bay, with our afternoon free to sit out along the bay, drinking wine and enjoying a beautiful day.