The SWAN Century and Family Fun Ride offered 3 different lengths, 13, 58, and 100 miles. This was the second year they had the ride in Sedro Woolley, coinciding with a town festival on the main street. The entry fees from the ride go to support children and give small loans to women in Bolivia and Kenya. 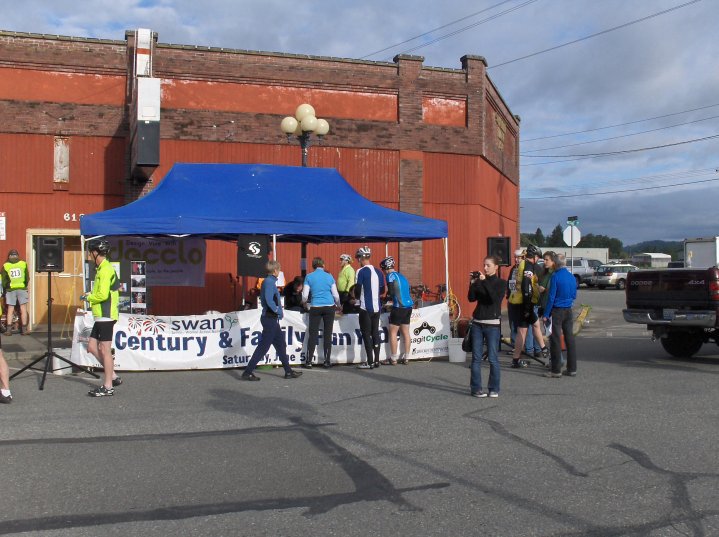 We opted for the 58 miles (100km, what they call a Metric Century ride) as this was more than we’d ever done before. We arrived at 6:30am, just as the check-in was opening. At this point it was a little cloudy and cold, and we stayed bundled up while pinning on our numbers and looking over the course map. Harold’s number was 198 and mine was 199.

The ride started at 7:30am and within the first half hour we’d stripped off most of our layers since the sun had come out. The first few miles we were a large 70 person group, we owned the road! Then we all began to spread out. One poor guy had a flat before we even got out of the town limits. 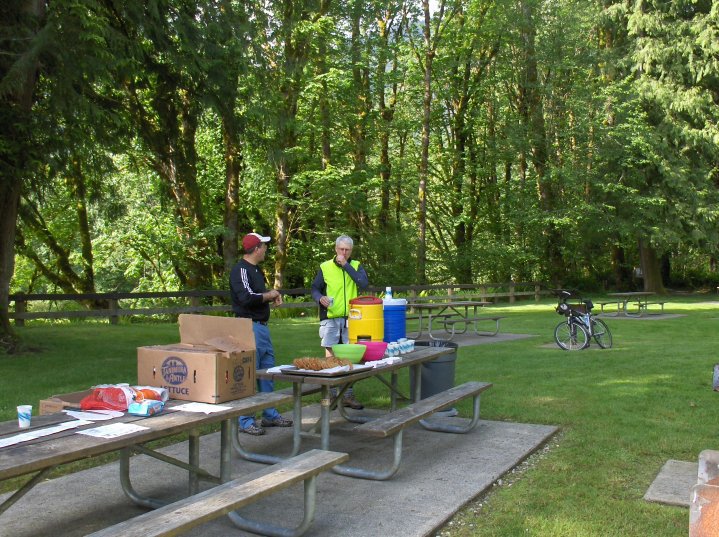 The wind was quite strong, and we were riding straight into it. It felt like we were riding uphill and with the gravelly country road, it made for a tougher ride than we’d hoped for, but we pushed on. Some miles seemed to go on forever, being very tough, while others were much  nicer and flew by. Our legs never got a respite from hard pedaling however. I found myself wishing we had more hills, so at least we’d get some downhill releases!

We rode right past the first water stop in Lyman, but were ready for a break in Raser State Park. After a bio-break, a couple orange quarters, half a banana, and Gatorade, we were back on route to Concrete.

Early settlers came to the Baker River in 1871, originally calling the settlement on the west bank “Minnehaha”. In 1890, the townsite was platted by Magnus Miller, a post office was set up, and the name “Baker” was adopted. On the east bank of the river, the community that sprang up around the Washington Portland Cement Company (1905) was named “Cement City”. After the Superior Portland Cement Company plant (1908) was built in Baker, it was decided to merge the two towns, and in 1909, after much discussion, the new community settled on the name “Concrete”. 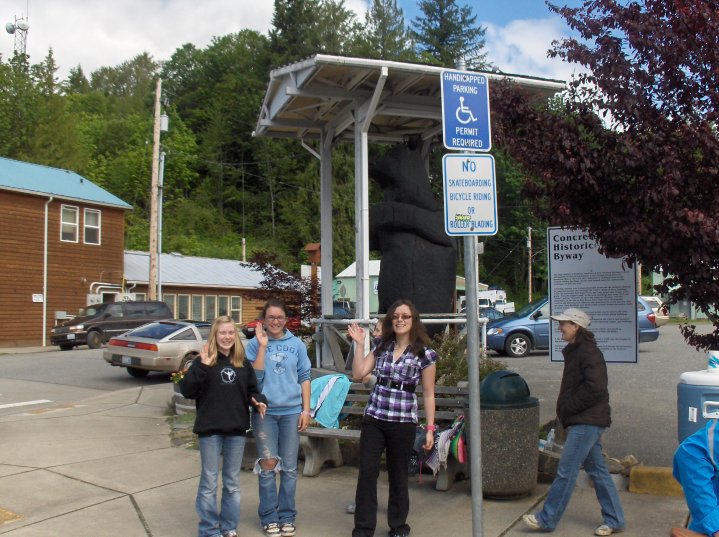 Concrete was the half way point. A quaint little old town, I was surprised I’d never been there before. It sits atop a hill, beside a river and falls turned dam. We were welcomed to this rest spot by 4 very cute and sweet cheerleaders. Everyone got a cheer and lots of up and down jumping.

The guy with the flat caught up to us at Concrete. He had a brand new carbon fiber racing bike and he was fast on that thing. I get a little frustrated with the fact we can’t do the same speeds on our heavier aluminum touring bikes, but keep reminding myself they are for a different purpose.

Harold had moved his seat up a bit before today’s ride and by this time, he was realizing that had been a mistake since his knee was really hurting. He moved the seat back and we hoped he’d be okay from here.

After more Gatorade and a shared cookie and orange, we cycled down the hill and crossed to the south side of Skagit River for the trip back to Sedro Woolley. 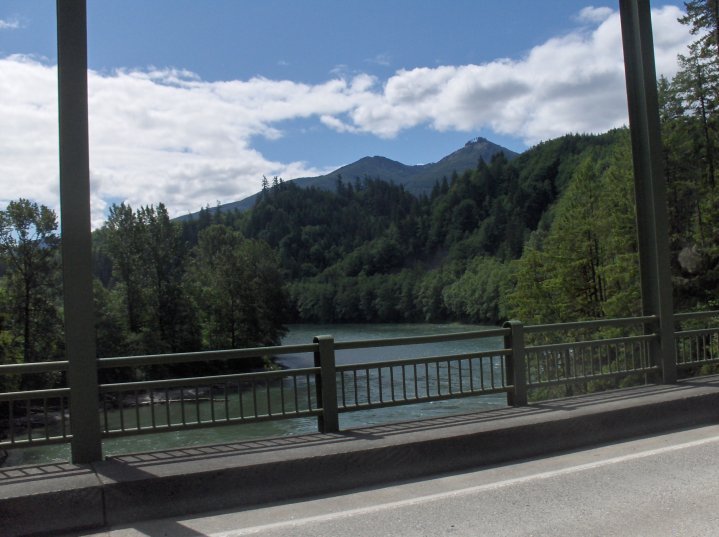 We had been hoping the wind would be behind us on the way back, but would have been just as happy with no wind at all. The last thing we wanted was to continue with the headwinds in our faces …. and that’s exactly what we got. Still, it was a beautiful ride back down, with very few cars.

Half way back we passed the same guy with more trouble with his flat tire. I guess he didn’t get out what had caused the first flat and it punctured his spare tube. The ride was over for him and the support truck picked him up and took him to the end.

Our last rest stop was 13 miles before the end where the same cheerleaders were there to meet us. At the 2 mile mark, I got a huge influx of energy and surged ahead of Harold, racing for the finish line.

Lunch was included with the registration, and it was the best meatball sub and salad I’d ever tasted. We decided against having the included ice cream cone and instead drove back to Birch Bay in time for Saturday Sips wine sampling at our local CJ Wijns.