I joined a few Meetup groups from Seattle since they tend to do some thing up near here and I’m also interested in what they are doing down there. One of them doesn’t have a lot of events but when they do they are at least a weekend or longer, typically cycling, but also kayaking trips. 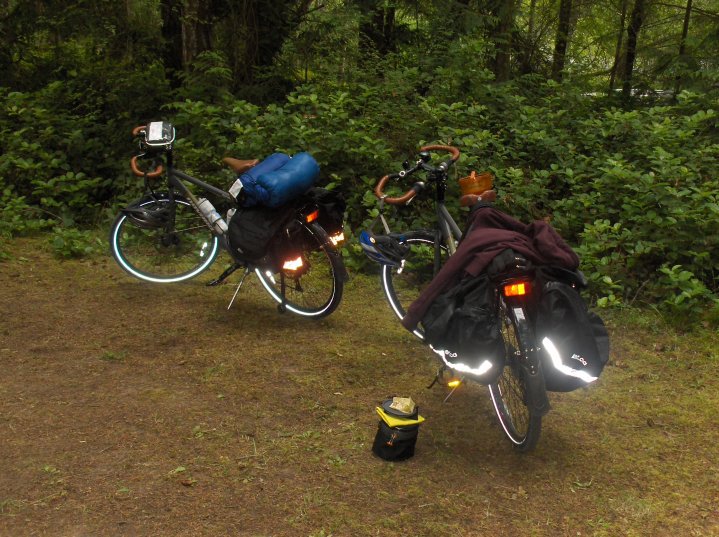 The ride we joined them on was starting from South Whidbey Island, then up onto Fidalgo Island, and a ferry ride over to San Juan and Orcas islands. The first evening we all met up in the camp site at South Whidbey State Park. State and County Parks have this interesting rule, that if you arrive on bike or on foot, you will never be turned away. They typically have Hiker-Biker sites that will allow many people to group camp together and you pay by the tent. Unfortunately, since most of the people on this trip were on road bikes, the organizer brought along his SUV to support everyone’s gear. That meant we didn’t qualify for the Hiker-Biker sites but we were able to get reserved sites here so it wasn’t a problem.

People came in at all different times. We were the only ones coming from the north, and we arrived by car so we we there first. About a half hour later, the organizer and a few others showed up. Then later, those who had cycled up from the ferry showed up.

The group was comprised of techie and engineer folk. One worked at Microsoft, another at Disney, one at Boeing, another at Amazon. We had an Indian engineer here on a work visa who had this snarky sense of humour I enjoyed but Harold didn’t. He told me that he puts off a lot of people here with his humour and when I told him I found him very amusing, he said it must be the Brit in me, since British get the snarky stuff.

The Microsoft guy was amazingly stereotypical. Very small and slight, I’m sure he was very smart, but he was completely socially inept. He was so rude in his ways, and he really got on my nerves, but you know, this happens a lot with geeks, so I gave him a pass.

The guy from Boeing was an uber-athlete. He’d gone to West Point and been a flight officer, before leaving to work at Boeing. His bike, made of Titanium, came apart into pieces for travel. It was both very strong and very light. He had a personality that was almost braggardly, but then he’d pull back and say something silly and you’d realize he was teasing. He was a very fun guy to be around.

One of the other engineers was a young guy of 28 who shocked me when I found out his age. Here was a man, in very good shape, very mature, seemed to have a wealth of knowledge, and yet I was old enough to be his Mother!!! He’d gone to Dartmouth and ridden on the cycling team there.

There were three other women on the ride, and I was proud of myself for being the only one to do the entire ride. One of the women worked for Disney, and made me laugh when she told me about how seriously they take the mouse there. People have actually been let go for drawing pictures of Mickey in situations they don’t approve of. They are told “Don’t mess with the mouse! Ironically or fittingly (not exactly sure which), she also told me that at Disney, as a part of their company credo of accepting alternative lifestyles, it is accepted for those who choose to live as Furries to wear their costumes at work.

One of the other women there was early retired. She had made a lot of money in the high stress, crazy houred financial industry of yesteryear, and now spends her life living in Seattle, Paris, and a hotel she owns in the Bahamas. Born in Japan, her parents had immigrated to Seattle when she was very young. She has a very interesting accent, a  mishmash of American, Japanese, and French. She runs marathons and had very muscular legs. One of the guys nicknamed her drumsticks because of them. She hadn’t done any cycling in years however, and had just bought a bike to come along on the ride. She did really well, since she was in such good condition, but if you don’t have a lot of hours of recent experience sitting on a bike seat, it can be very hard on your backside.

The third woman was from Denmark and had met her husband online years ago, eventually marrying and moving here. They were riding a tandem bike together and brought along their two dogs in a trailer. 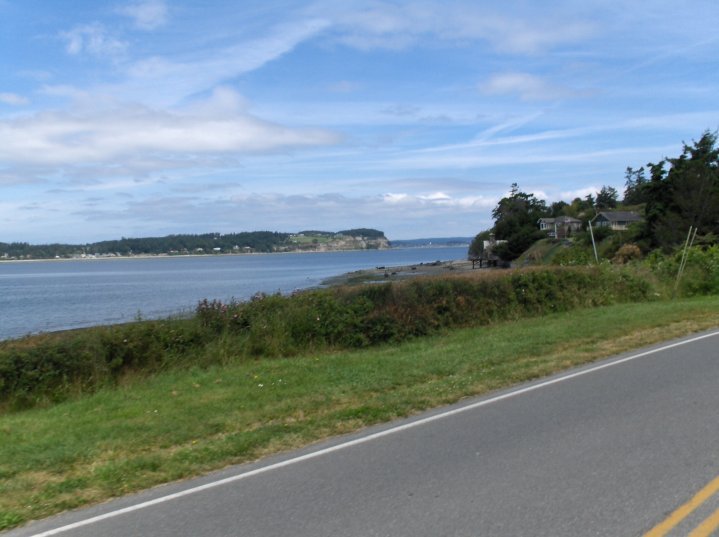 The first day we rode up through Coupeville, where we promptly lost 3 people. I was the only one to notice since Harold was one of the missing. Usually he is just up ahead of me, and will stop if I get behind, but I was pretty sure he’d been behind me when we left Coupeville and then when I looked back he had vanished. I thought maybe I had made a mistake, that he was up ahead but was worried something had happened so I waited, then moved along at a really slow pace, hoping he’d catch up. I caught up to two of the group and told them I thought we’d lost my husband but they were pretty sure we were the last ones. That didn’t make sense to me, but I decided to push faster and catch up to the group to see if they were right. I was half worried something had happened to him, and half angry that he’d leave me behind … but I knew he’d never done that before.

The group was stopped at the next turn about 5 miles down the road. My heart sank when I saw he wasn’t one of them. I told them he was missing and was headed back to look for him and was a little upset when I felt I wasn’t heard. I raced back to Coupeville just wanting to find Harold safe and sound and was so overjoyed when after 4 or 5 disappointments of seeing riders that weren’t him, there he was with two others. I hadn’t even realized two others were missing! 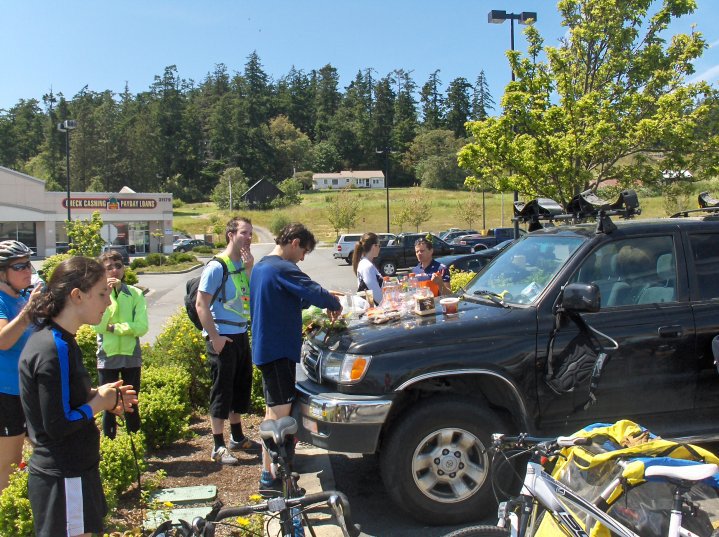 I asked them what had happened and they’d got cut off by traffic and missed seeing where we’d turned, then ended up in the midst of a country fair and had to backtrack in a number of different directions before asking someone how to get to Oak Harbor. We quickly made our way back to the turn where three of the faster guys were waiting and we made our way to meet up for the lunch stop at Oak Harbor.

Nothing tastes as wonderful as bagels and hummus and fruit on a long ride. We ate off the front of the organizers SUV and it was the most wonderful meal. Then we were back on the road, where we’d agreed to meet up again at Deception Pass. 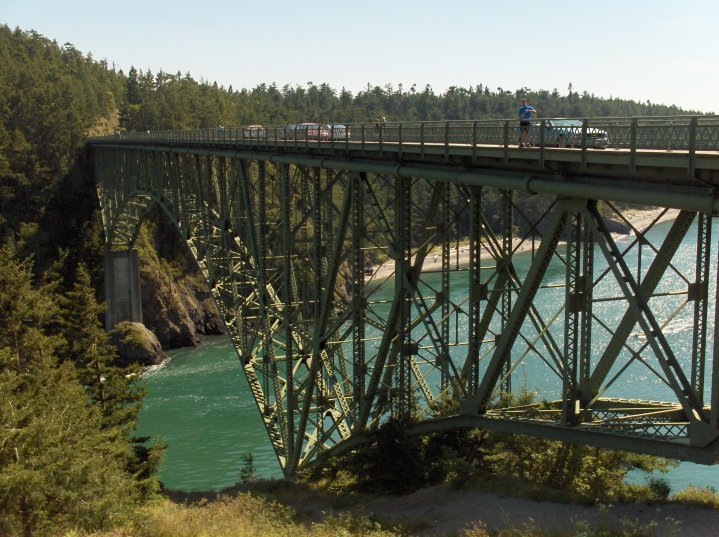 Deception Pass is a strait separating Whidbey Island from Fidalgo Island. The first Europeans to see Deception Pass were members of the 1790 expedition of Manuel Quimper on the Princesa Real. The Spanish gave it the name Boca de Flon.  A group of sailors led by Joseph Whidbey, part of the Vancouver Expedition, found and mapped Deception Pass on June 1, 1792. George Vancouver gave it the name “Deception” because it had appeared to be a narrow bay instead of a strait.

The bridges are high up over the water, with beautiful vistas east and west. The sun was shining when we got there and we just sat and looked out, feeling the beauty invigorating our hearts, before riding on again, all the way up to Anacortes. We got there with only minutes to spare, and raced onto the ferry, which sailed right away.

Once on the other side, we rode a short distance to the beautiful Lakedale campgrounds, situated on a series of fresh water lakes, in the middle of the island. We had originally planned to go to San Juan County Park. Unfortunately because we had an SUV along with us, we weren’t eligible for the Hiker-Biker sites and the regular sites were all full. Harold and I will definitely plan to camp there when we go there alone. That area is known to be the best place in North America to see whales from land.

That night we had dinner and drinks and them headed to bed. The guys in the site beside us had been drinking all day and were loud and obnoxious when we got there but thankfully they were all passed out early so we had a good nights sleep. 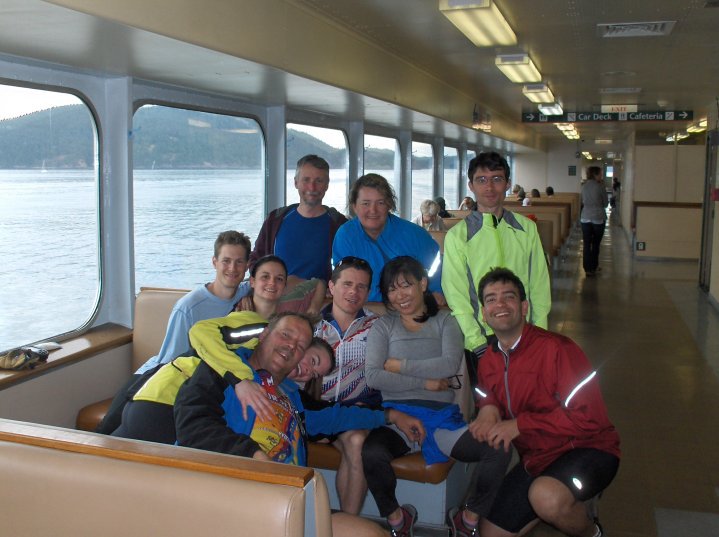 The next morning it was decided we weren’t going to make it to Orcas Island since the ferry schedule made it that we couldn’t get there until afternoon and we had a long ride to get back to South Whidbey. As we were packing up we saw a black fox. It was so exciting since I’d never seen one before. The interesting thing about the islands is since there aren’t any bears or wolves, or hunting, the wildlife is both abundant and not very afraid.

We spread out more along the way back, meeting in Deception Pass and Oak Harbour and finally at the campgrounds where we’d all met up Friday night. We changed, said our goodbyes and headed off for home.