From Wikipedia:
Big Sur is a sparsely populated region of the Central Coast of California where the Santa Lucia Mountains rise abruptly from the Pacific Ocean. The name “Big Sur” is derived from the original Spanish-language “el sur grande”, meaning “the big south”, or from “el país grande del sur”, “the big country of the south”, referring to its location south of the Monterey Peninsula. The terrain offers stunning views, making Big Sur a popular tourist destination. Big Sur’s Cone Peak is the highest coastal mountain in the contiguous 48 states, ascending nearly a mile (5,155 feet/1571 m) above sea level, only three miles (4.8 km) from the ocean. 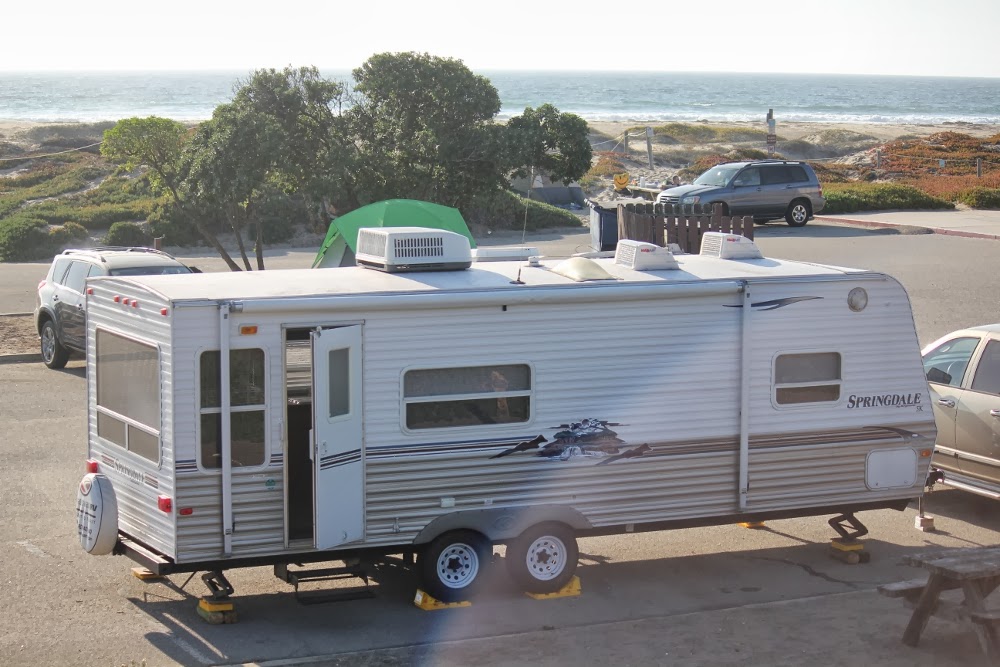 The road is very narrow and quite high up, with little to no shoulder room, and abrupt cliffs that go way down to the rocky ocean below. I’ve done it before in a small car, a VW van, and a camper van. All three times, I was pretty terrified. There was no way I was going to do it towing a 25′ trailer.

Our neighbour in the RV park, from Brampton, Ontario, was one of those braggardly types who likes to show off. He was getting set to move on south as well. We were speaking about routes and he went on and on about how he wasn’t afraid of the Big Sur highway, he was a big tough man, unafraid of anything. We watched him take 20 tries at backing up his truck to his trailer, while his wife was inside cleaning the blinds, and wondered if anyone will ever see those two again. 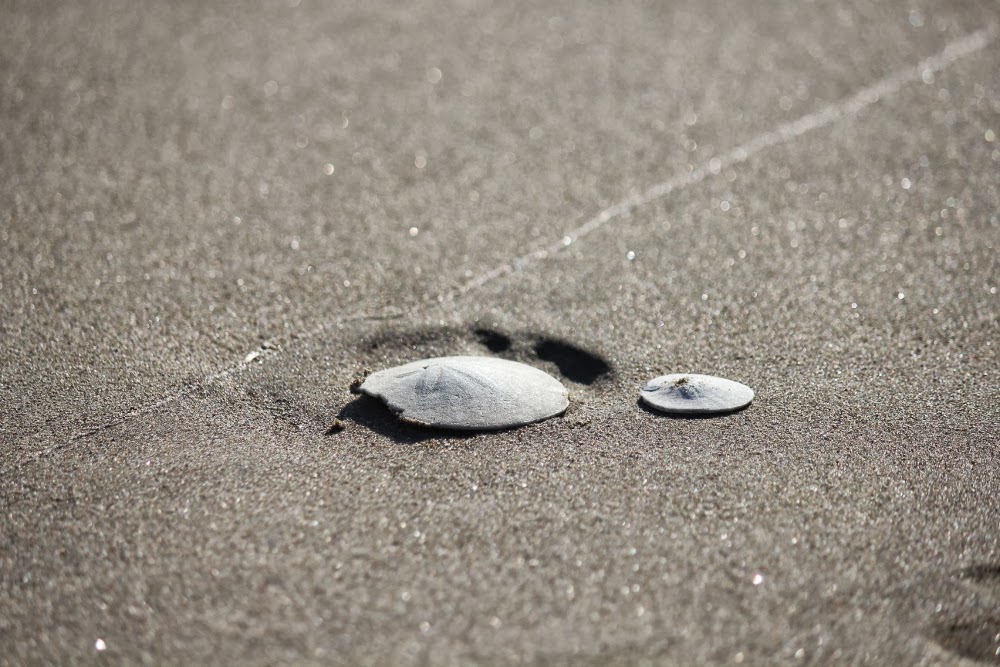 So we took highway 101 down south to Paso Robles, passing right on through. It was hard not to stop at the wineries, but we knew we’d be back in a few days, so we cut over to the coast and made our way the campground.

Morro Strand State Beach officially limits RVs to 24′ (27′ including hitch) and below. We’re at 25′, or 27’11” with the hitch. On the web site, they say they are very strict about it. The campground isn’t much, just some parking spaces, fire rings, and washrooms, but it’s the location that we were after, right on the beach. 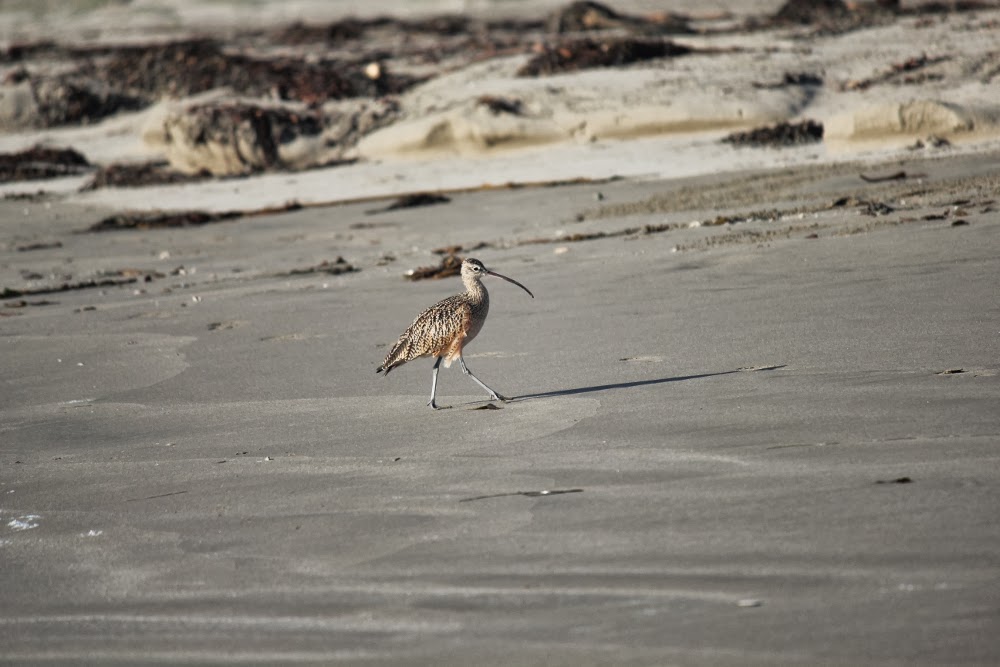 I’d been training Harold and I, to answer 24′ when asked about our size since before we’d even left home. We got up there, all nervous and ready to lie and they didn’t even ask. Then we drove in to choose our spot and saw RVs that were much bigger than ours. On the rules, they state they will charge for two spots if you don’t fit inside the parking lines, but nobody even checked us. Obviously they are not as strict as they say. 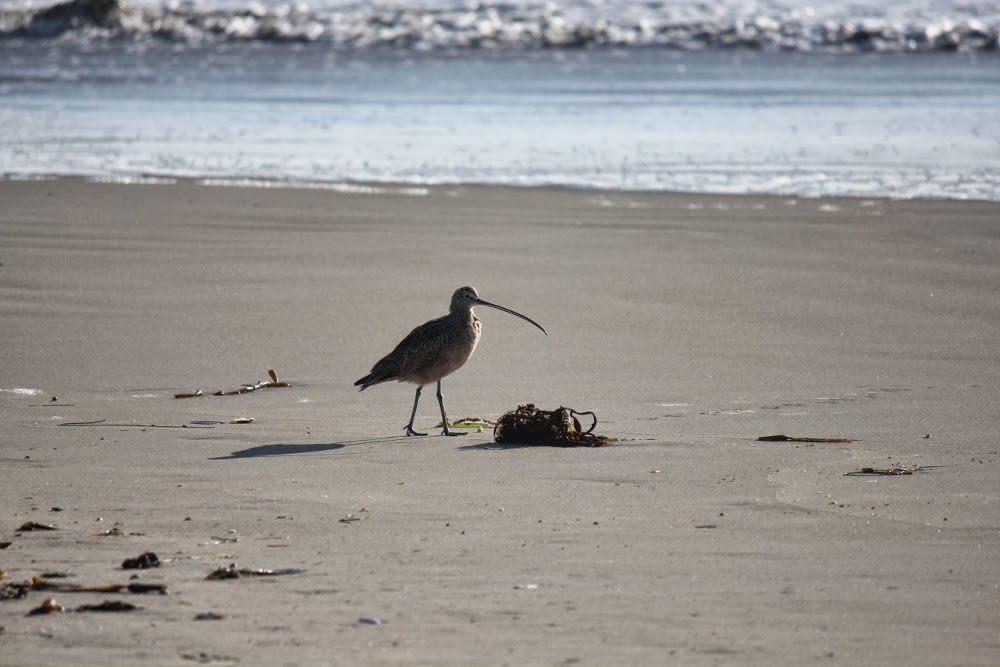 The campground was fairly busy, though far from full. There were two sets of camp hosts here, sharing shifts, selling fire wood and answering questions. Camp hosts are typically unpaid retired volunteers, usually couples. They are given a free camp site and may be paid if they are expected to do any grounds work. Even when paid, it is very low, so  it is really only of interest to older RVers looking to spread out their costs and income. I don’t think you could support a couple on the income. 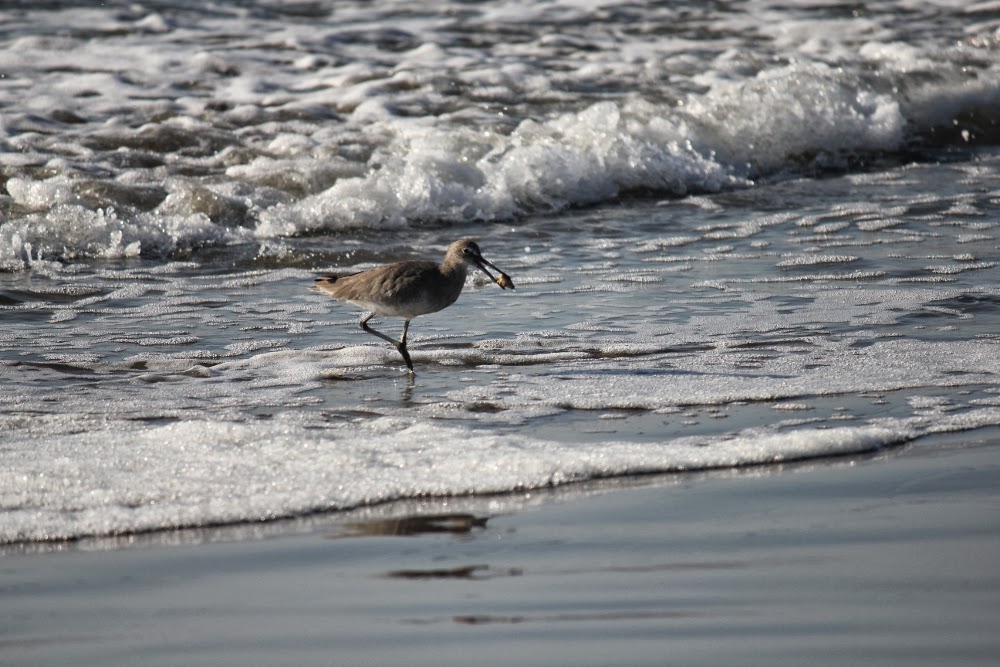 One of the old guys (the friendly one), was born in Winnipeg, MB but has never been back to Canada. He said he’d like to take his kids up there one day. I figured he must be on his second family, as he was definitely older than us, and looked more Grandfatherly. The other guy was a grumpy, old, curmudgeon. Not ideal for the camp host business. They must not do in-person interviews. 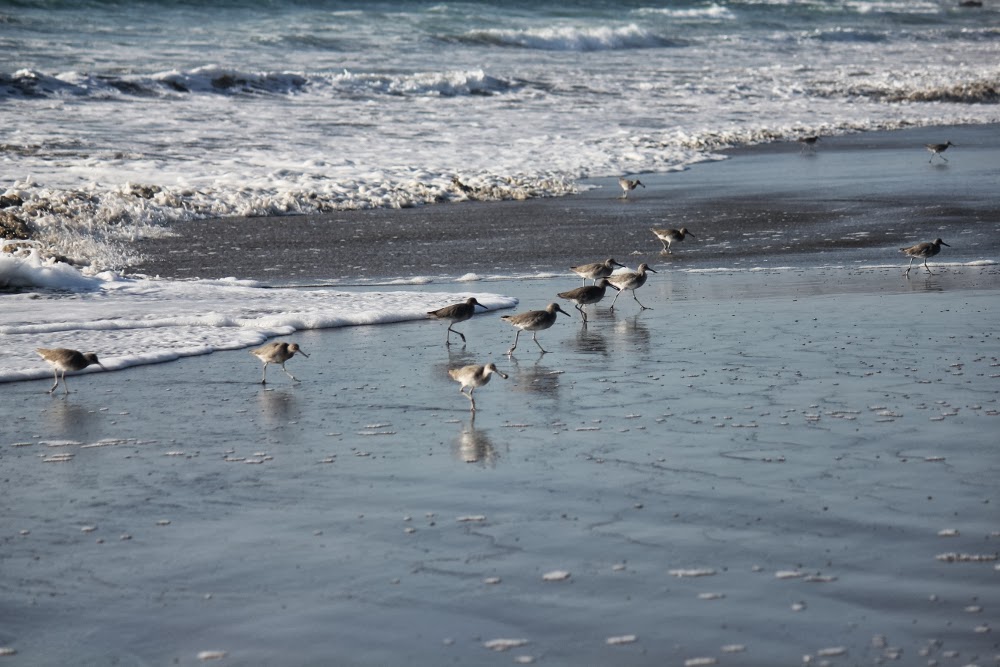 No dogs allowed on this end of the beach, which was just fine with us. Toonie hates the wind. So we took off our flip flops and walked way up the beach, through the surf. The water was jarringly cold at first, but you get used to it. There were birds everywhere, racing along the beach, chasing the waves, or rather, what they could find in the sand, once the water receded. 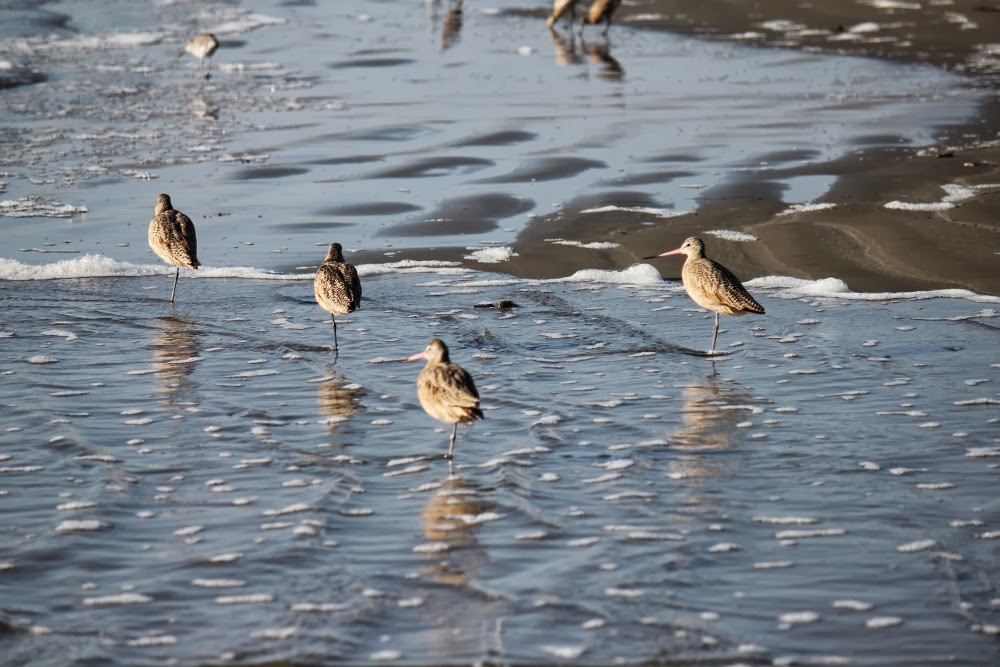 We saw a group of one-legged birds, and we had to have a picture. How awesome that these four, poor, handicapped birds had banded together. They hopped along through the surf, after the same food their two legged brethren were after, and I was quite impressed at how quick they were hopping. I mused aloud about how they were probably all kicked out of their flocks for being different and had found each other, forming their own group. It was such a romantic, touching story, and made me feel an even bigger fool, when one by one, they unfolded their second legs, and flew off. 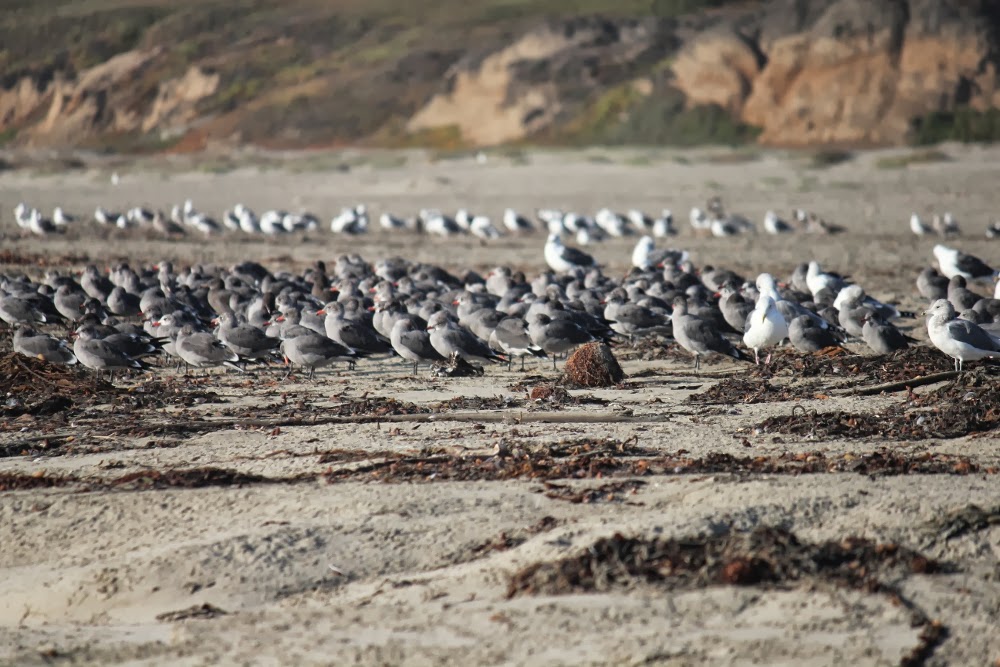 Further down there was a huge flock of gulls roosting in the sand. The younger ones were down at the front, with the older ones in behind. There were hundreds of them there and we took a big berth around them, so as to not disturb them. Of course, the three teen boys coming the other way had different desires, and ran right through them all, scattering them all down the beach. They aggravated me. I wanted to push them all in the ocean. 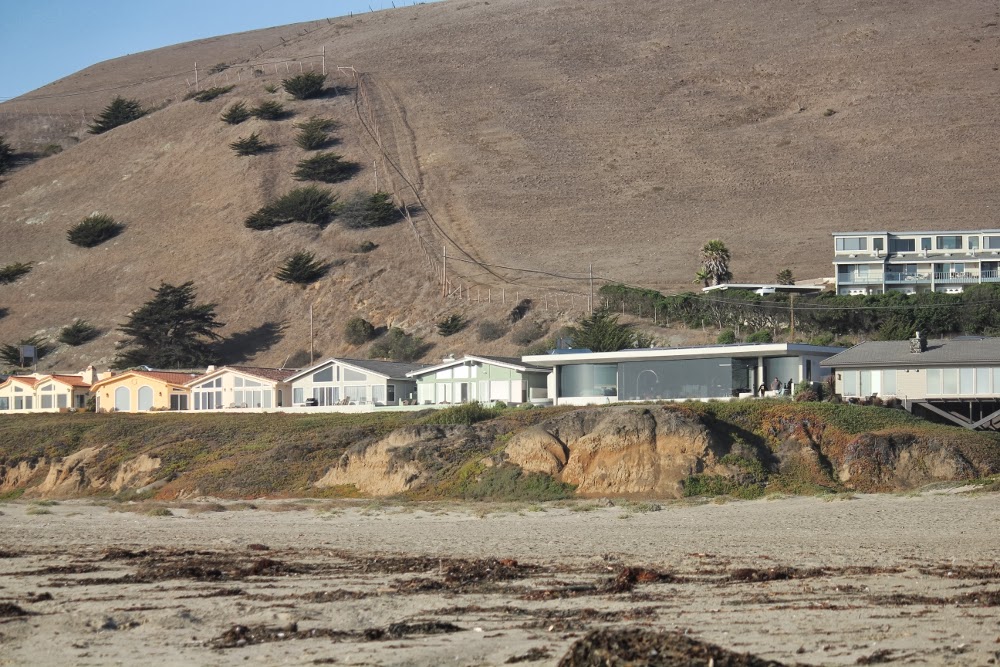 There was a lone fisherman casting away in the surf. We asked him what he was trying to catch, and he said he was mostly out there to have some alone time while the kids and grandkids are visiting, but occasionally he will catch a Perch. 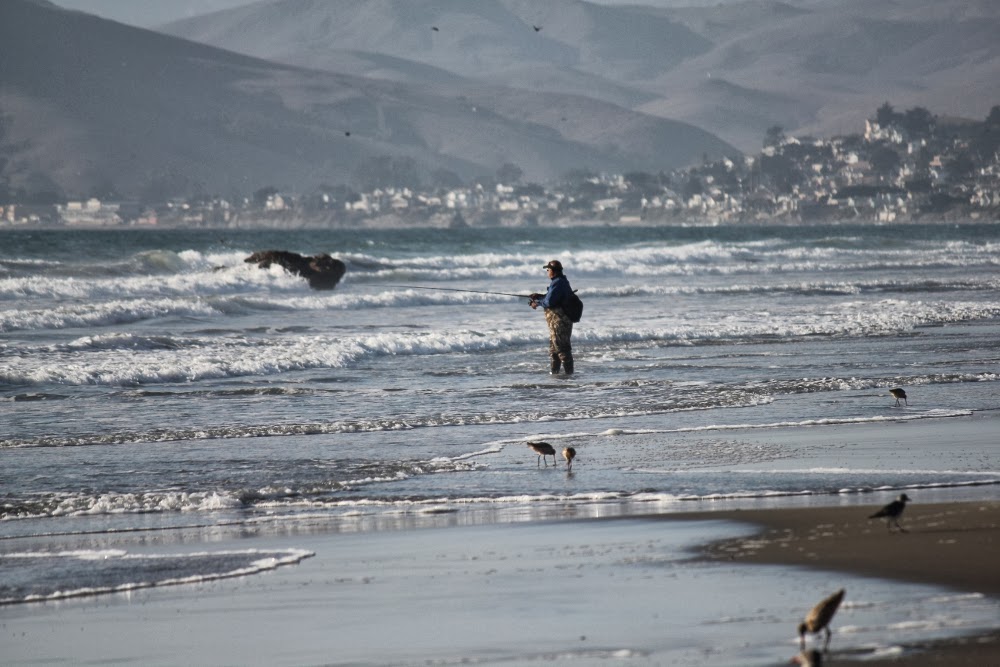 That night we had our first camp fire of the trip, and as befitting such an occasion, dinner was camp fire smokies. Alas, no S’mores were to be had. Instead, we had pre-mixed Golden Margaritas from Costco, our new favorite drinks. $12 for 1.75 litres of pre-mixed Margaritas. No muss, no fuss, and almost no cost.