Blew the budget on wine, so we’re off to Nevada!

Only allowed to take 4 bottles of wine back into Canada, we already had 5 really good, more expensive bottles. We were feeling like we couldn’t trust ourselves to only taste, and not buy, and we like to keep our better wines for times we can share them with people who will appreciate them as well. When we’re on the road, in the trailer, in the U.S, there are so many good, drinkable wines that are so cheap, from places like Walmart, Trader Joe’s, and BevMo, it seems wrong to drink the really good stuff from a plastic wine glass.

We’d planned to spend two days in Paso Robles, but when I couldn’t get in touch with the second winery we wanted to stay at, we took it as a sign, even though I don’t, in any way, believe in signs. It was now time to make up the day we were behind, and head to Nevada.

On the way out of Paso Robles, going east on Hwy 46, we went through the area where all the bigger wineries are. Next time through, we’ll make sure to stop at some of those. We’re finding that more than a day of wine sampling is often overkill, and prefer to do one day on, and one off. That’s something to keep in mind for future trips.

This highway, built in the 1920s, and fully paved by 1930, stretches from Cambria, on the coast, to just north of Bakersfield, but we were planning to turn off when we hit I-5. The first part of the highway used to be known as “Blood Alley”, for the high number of car crashes, especially head-on collisions that occurred on it. The junction, up where it hits Hwy 41, named the James Dean Memorial Junction, is where the actor was killed, September 30, 1955.

Further along, we came across a really ugly area known as the Lost Hills Oil Field. This is where the Bellevue blowout occurred on November 23, 1998, erupting into a huge gas fire that lasted 14 days, and was seen from 40 miles (60 km) away.
Once the fire was extinguished, there was still another 6 months of uncontrolled natural gas expulsion. 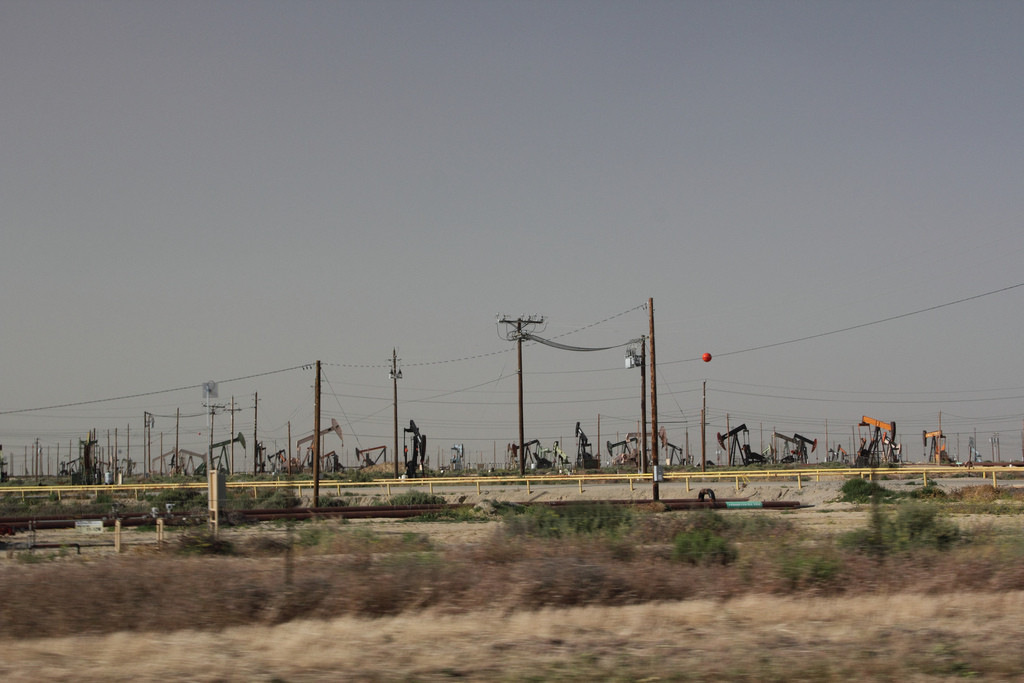 The whole area looks very messy, and low tech, with many, many smaller oil wells, almost one on top of the other. It has a nasty, 1920’s oil field look to it, (kinda Steam-punk, without the coolness factor) and makes me wonder if they aren’t the very same wells originally installed there.

We stopped at the junction where we were to turn onto I-5, at a service area with 5 or 6 big trucker gas stations. Trying to make it out of California before refueling, due to cheaper prices across the line, we were instead looking for a quick lunch. We were unimpressed with the huge variety of fast food, and instead settled on the little Mexican food truck parked over outside a local business. The truck was run by 3 young Hispanic women, and all the patrons were also Hispanic, so we figured, it was probably a good choice, even though we could barely understand what we were ordering. We had choices of parts of the animal I don’t even like to think about such as tripe, and organ meat. I’m not sure what parts of the animals we ended up with but we had some chicken parts and some cow parts in our tacos and they were just wonderful. Much better than we’d have had across the road at the Taco Bell. 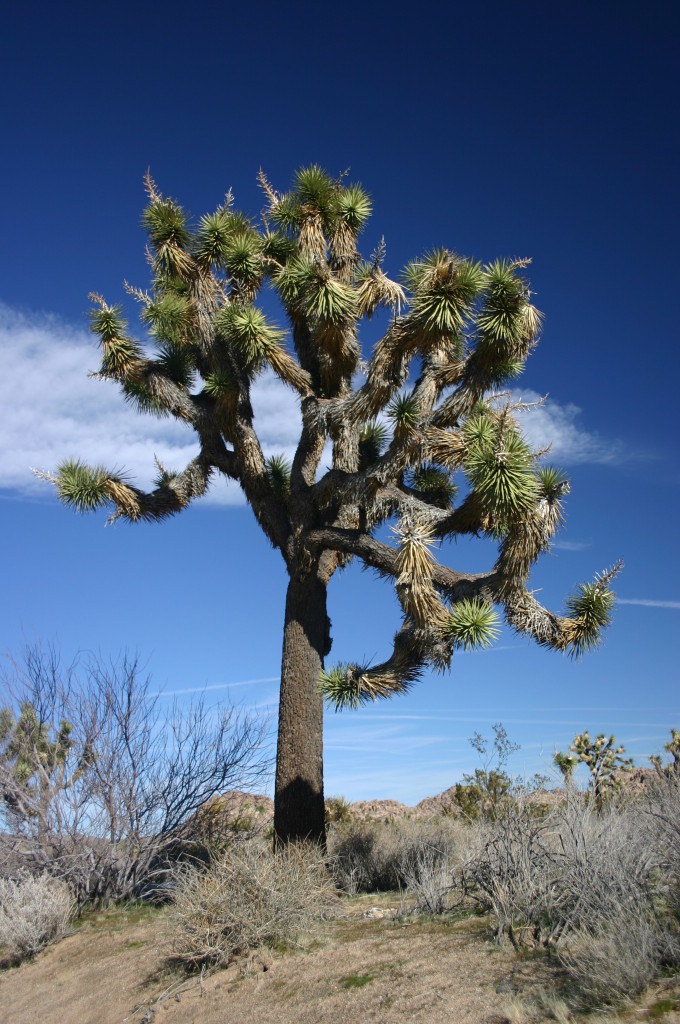 We only had two more stops before hitting Nevada, for gas and groceries, and then it was a long, lonely drive across the Mojave desert, an area covered by nothing else but Joshua Trees. A type of Yucca, it was named by Mormons because it reminded them of a bible story of a man named Joshua, raising his hands up into the sky, in prayer.

Half way across the desert, I got a call from my daughter. Between the bad connection, the road noise, and the higher pitch of her upset voice, I couldn’t understand what she was saying. In a panic, I told her I’d call her back on Skype, so I could wear my headphones, and hear her better. When I turned on my router, I noticed we had a text message from Verizon on there, so I opened it up to read we had now used up all our month’s data (in 13 days time, mind you!) and would be charged extra if we went over. With no idea how much that would cost, I felt in a quandary over whether to just call her back on the phone, or use Skype. The decision was quickly removed however, when I realized we were in an area with no data coverage whatsoever. So I called her back, plugged one ear, made her calm down, and demanded she speak to me in a lower, more masculine voice. Sort of like she was channeling her inner man.

Before calling her back, I’d figured there were two reasons she’d be calling me so upset. One, she’d done something to her phone. I quickly discounted that since I could see she had called me on it. The second thing I could think of was something super bad had happened to her, and that terrified me. It had been very hard for me to leave her alone at home for a month. I’ve left her for a weekend before, but that’s it. Once we’d left home however, all my worries had miraculously disappeared. Out of sight, out of worry. But now it looked like maybe my worst fears may have come true. I never should have left her.

Alternating my tones between stern and more cajoling, I was finally able to ferret the catastrophe out of her. She’d spent the Thanksgiving weekend at her father’s and had come home to find fruit flies had invaded the garbage can. Yes, fruit flies. When she’d first told me the issue, I thought she meant black flies, which was so much grosser, and it was a relief when she told me they were just the tiny fruit kind. She had no idea how to deal with them, but had looked up some ideas on the Internet that weren’t working quickly enough for her liking. She took out the garbage, put out some homemade vinegar traps, got out the fly swatter, and got to work. I told her to walk down to Subway to get dinner, and take a break, and was able to leave her feeling better. As I told her, being an adult means learning to deal with stuff like this. She responded that she doesn’t want to grow up, and may end up living with me until she’s 30. Yeah, right, over my dead body.

First crisis averted, now I had my own to deal with, our Verizon wifi plan. Lucky for us, the plan renewed in 2 days time, so it was a temporary problem, but the bigger question was how could we have gone through 5gb in just 13 days? I was able to narrow down the biggest problem – my tablet – which was downloading updates constantly, to a tune of 300mb daily. At that rate, 5gb gets gobbled up very quick. I have all my electronics set to download only over wifi, and never use data automatically, but of course, they were seeing the router as a wifi connection and downloading indiscriminately. My worst perpetrator was my blog download app. I have it set to update every 30 minutes at home, and download up to 4000 blog entries. Obviously, this was a newb issue and not one I’ll ever repeat.

Our GPS told us the driving time between Paso Robles and the Nevada border was about 6 hours. Add in stops and our slightly slower speed, and it ends up a long driving day. We knew we’d get into Nevada at night, and I’d always wanted to try some of the smaller gambling towns along the way, so we stopped in Primm, Nevada at about 7:30pm.

Primm is more like a highway service stop than a town, made up of 3 casino-hotels, all owned by the same company, Primm Resorts. We stopped at Buffalo Bills first, as I’d read online it had the best RV parking area. We couldn’t find the RV area, so Harold went inside to ask where it was, and was directed to a dark, dim, vacant lot right beside the highway. It would have been okay to sleep in, if we had no other choice, but I didn’t feel good about leaving the truck and trailer, and especially Toonie, all alone out there. 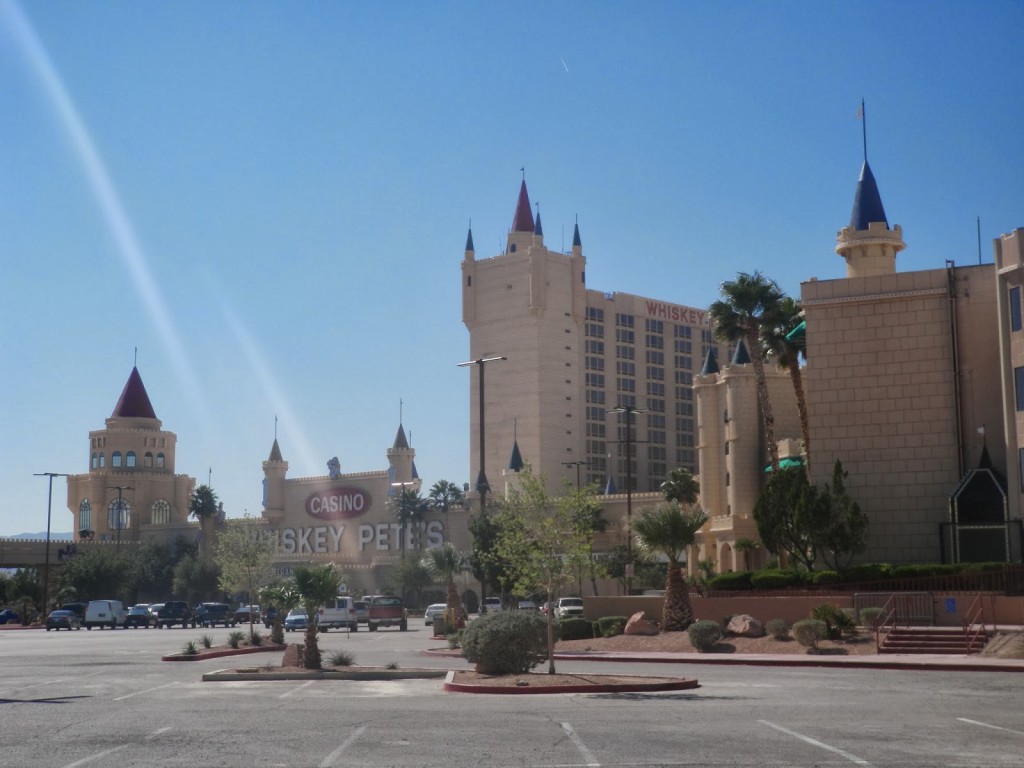 We knew the Primm Valley Resort didn’t allow overnight parking so we went over to Whiskey Petes instead and parked in line with all the trucks, knowing they might interfere with our sleep, but there was at least a perceived safety advantage with the well lit area and more people. After finding a fairly flat spot, we headed into the casino and got a Players Card. This one was good for all 3 casinos here and offered us only 1 small perk. Spinning a wheel on a computer, we both won 10% off at any restaurant within the casinos. I’m sure that’s what 99.9999% of newbies win. 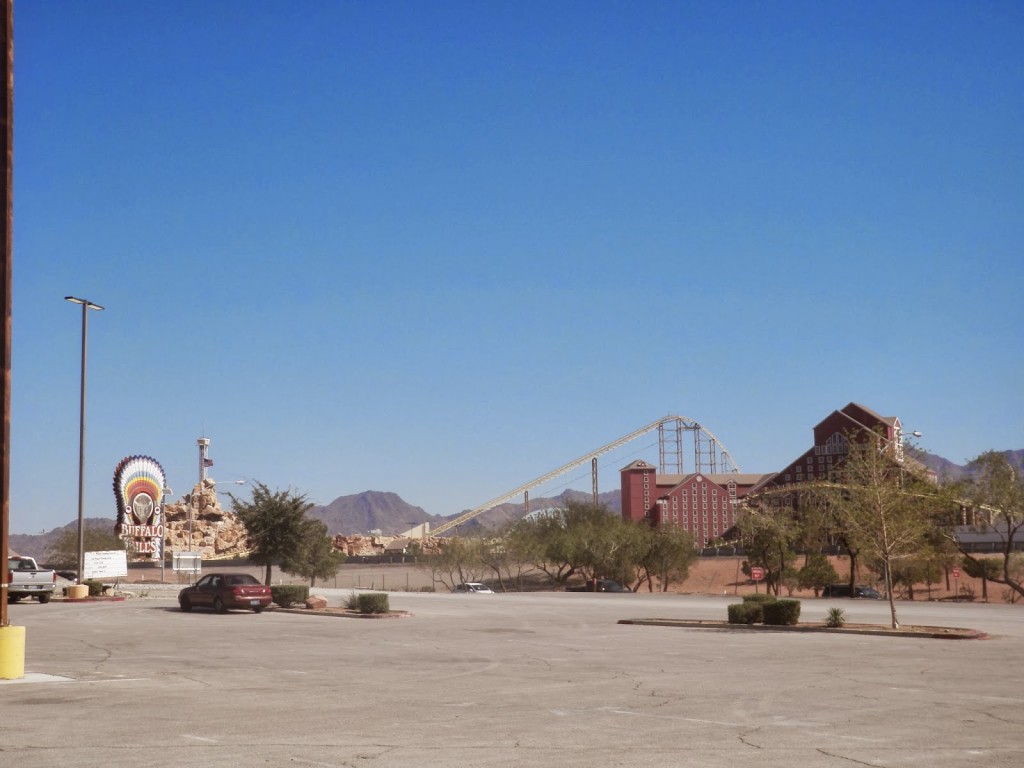 All 3 of the casinos were deserted, and all the restaurants were closed already, except the coffee shop so we spent our coupon there and shared a plate of nachos. The monorail that went between the casinos was broken, and we had no intention of waiting for a shuttle, so we walked back to the trailer, wondering how we’d still managed to come out reeking of smoke when there was nobody even around.

Over the hills and through the vineyards

Las Vegas – Miracle In The Desert