The plan had been to be finished with work, all packed, and ready to go by 3pm, but work issues got in the way, and we ended up leaving at 5:30pm instead. Our first stop was Tulalip, for groceries, and then our tentative place to sleep was the Walmart at Chehalis, Wa, but we really wanted to make it to the Camping World in Wilsonville, Or. This was where we could buy our Honda generator, a quite large purchase, which would save the sales tax, and charge our laptops (among other things) which allow us to work.

We kept up with our time, and even caught up a little by not stopping for dinner. Walmart, in Tulalip, is just too freaking huge. As I wandered the deserted aisles, looking for a laptop lap pillow, I wondered just how big it was, just how many football fields would fit into that place? 10? 12? 20? I have no idea. If I have to put anything into football terms, it pretty much means I hate it. Instead of making me buy more, I felt the need to hold back, because the size of the place just overwhelms me. I ended up giving up in frustration, rushed over to get the most basic of groceries and got out as quick as I could.

It was about 10pm by this time. We had a 2 hour drive to Chehalis, or a 4 hour drive to Wilsonville. We figured, if we could get enough coffee, we’d be fine driving all the way to Camping World, where we could stay the night, then get up, buy the generator, and work all day until 3pm, before driving to the next place. So we went off in search of a gas station we could pull into, to refill our diesel and caffeine levels. 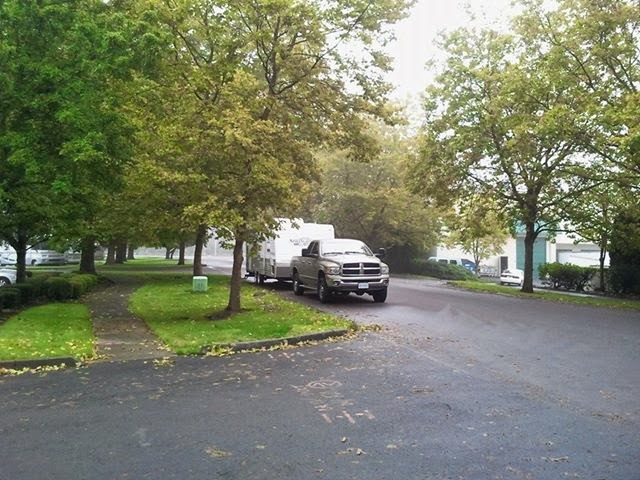 In Washington, coffee is king. This is, after all, the birthplace of both Starbucks, and Seattles Best Coffee. Everywhere you go, there is a drive-thru coffee hut, with a thousand different flavours of coffee, and three or four types of milk. In more rural areas of the state, the competition for business has driven the small roadside coffee huts to resort to bikini clad baristas, which lead into topless baristas, and even sexual act baristas. There have been many sex scandal barista stings in Washington state, as a result. We were both elated and nonchalant about finding a coffee hut open, in the middle of nowhere after 10pm. This is Washington, after all.

About 2am we drove through Portland and right into a super thick fog. We could barely see a car length ahead of us. We had to slow down, as a result we didn’t get to Camping World until 2:30am. Alas, it was just as my Mother had warned us, stock full of RVs. We tried to pull into one spot and found it left us hanging way out. As we sat right under the window of a monstrous RV, I looked up and saw a decal on the window … “Protected by Ruger”.

Harold opened his door, as I jumped out to direct him back out of the space. All of a sudden, the truck started blaring in alarm and the lights were flashing. “Shut the door!” I whisper-yelled. He didn’t hear me, so I waved frantically, running up to the truck. He looked at me and shrugged, as I closed the door. I wandered back behind the trailer, and started to direct him out again, and he opened the freaking door again. The alarm started shrieking again.

“Oh! It’s the door! I thought I was hitting the horn.” I had visions of a Ruger coming out the window of the RV over us and a bloody death for both of us.

Thankfully, we lived, and were able to pull out onto a side road that looked deserted and quiet. We settled down quickly and went to bed.

At pretty near 5:30am there were huge clanking and grinding noises all around us. Some yee-haw was at work early working on his monster truck and the sound was so overwhelming, all 3 of us were wide awake and grumpy.

Camping World opened at 8am, so I wasted time wandering around, looking at all the vacant RVs. No wonder we never heard from the Ruger RV, it was empty like all the other RVs there. We’ll never bother trying to get in there again. It saved us a few hundred dollars though, so, in the end, it was worth the lack of sleep, and the fear of death, in a wild and foreign country. 😉

It’s the small wins that count