We found a place in San Francisco that could look at our air conditioning,  so we headed off early, leaving the trailer,  and taking the bikes. The highway after the Golden Gate bridge is under heavy construction and very tight. We soon turned off to our road and of course it was one of the steepest in the city.  I was afraid driving up, and thought there was no way I’d cycle down that.  I remember walking down this part, when we were here last, and how hard it was. 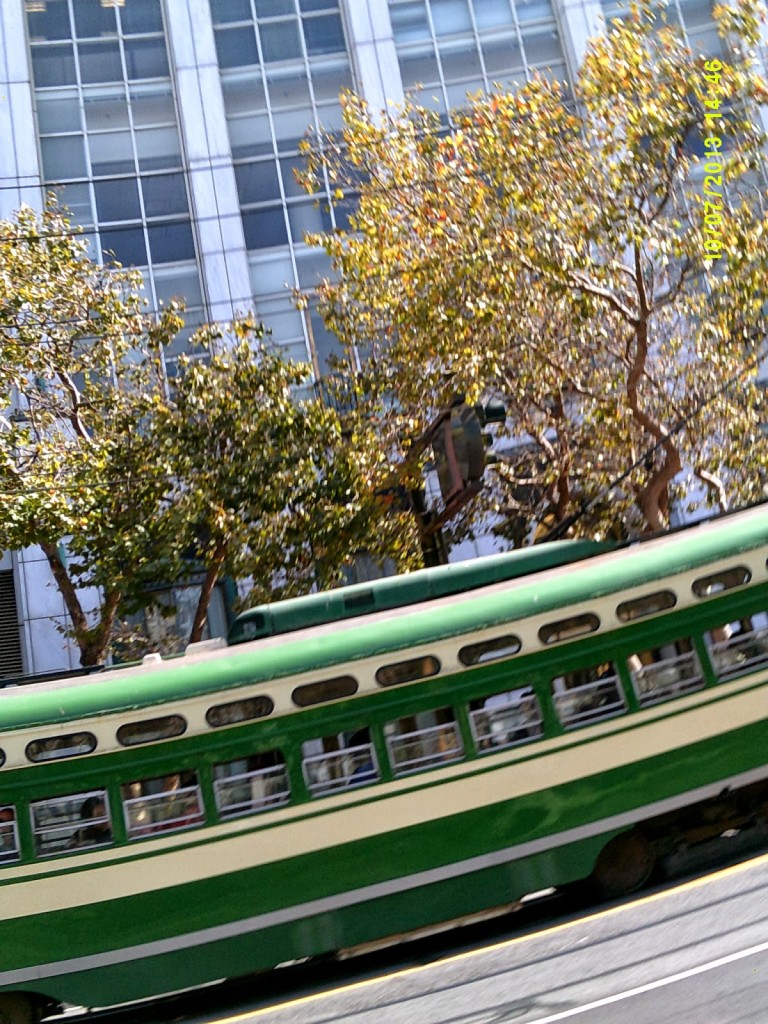 Dropping the car off in the Haight, (an area known for it’s history of hippie subculture), they told us they’d get back to us later to tell us what the problem was. We grabbed the bikes out of the truck, put Toonie on the back of my bike, and had all the mechanics running up to take pictures with their phones … for their girlfriends.

The west side of the city is less steep, with a more gradual hill. We took that down to Market, and stopped at a Boudin bakery, a San Francisco staple, known for their sourdough bread. The first bakery was started in 1849. They took the sourdough used by Gold Rush Miners and blended it with master baker techniques brought from Burgundy, France. They are found all over San Francisco. 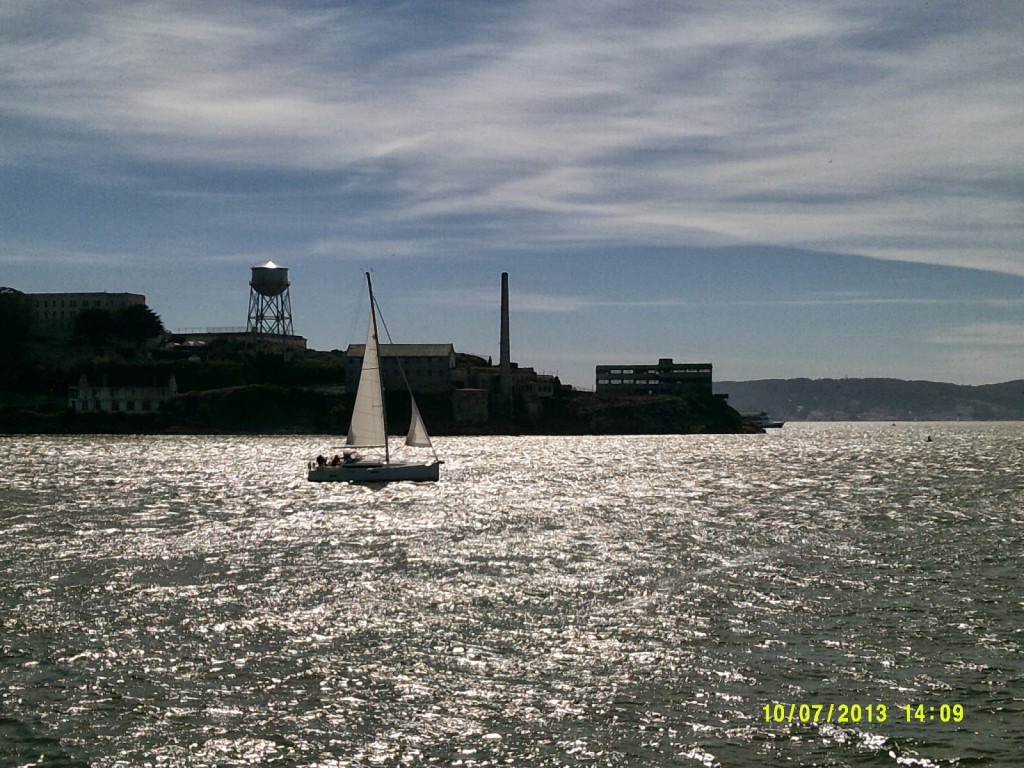 We shared a great Denver scramble in a sourdough bowl. It was so yummy and there was no way we could have had one to ourselves.

Sitting out on the patio, it was fun to watch all the people walk by the bikes oblivious, and then some would stop, double-take, and start oohing and aahing over Toonie, before taking her picture. She just poses there with her big pitiful eyes, tongue hanging out the side off her mouth. 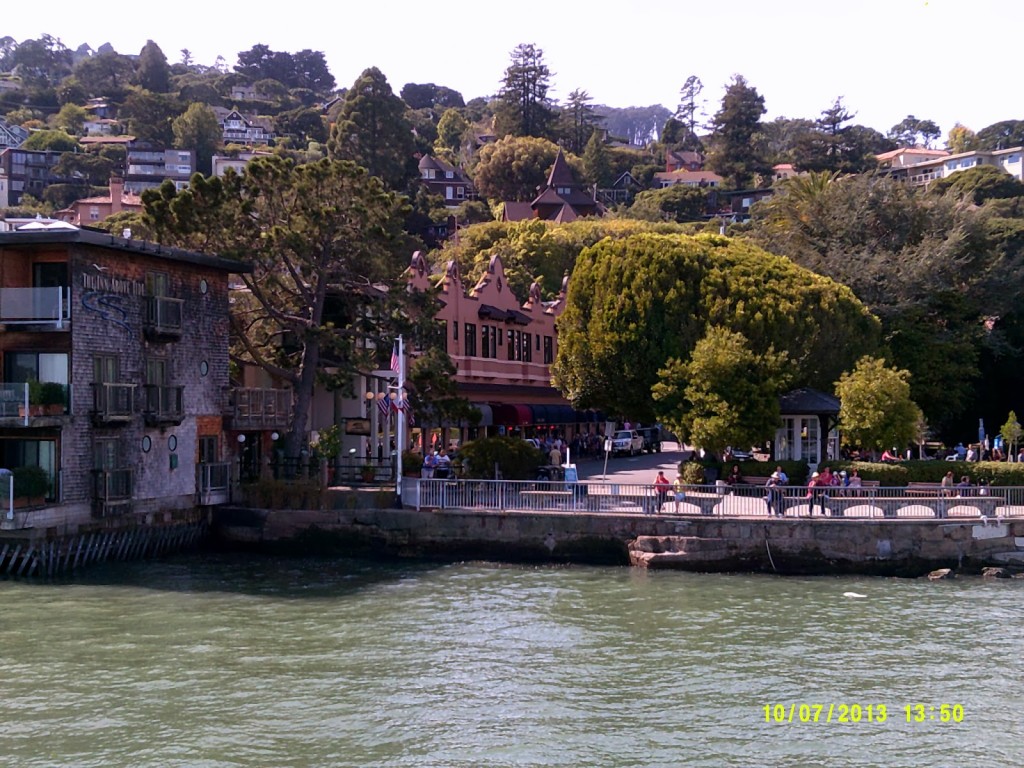 We could see smoke coming from up ahead at the Presidio, and the closer we got, the harder it was to breathe and see. When we got up to it, we saw the fire was in the trees up the hill, between the park and highway. There was an ABC correspondent there getting opinions from the pedestrians around, but we just kept going. 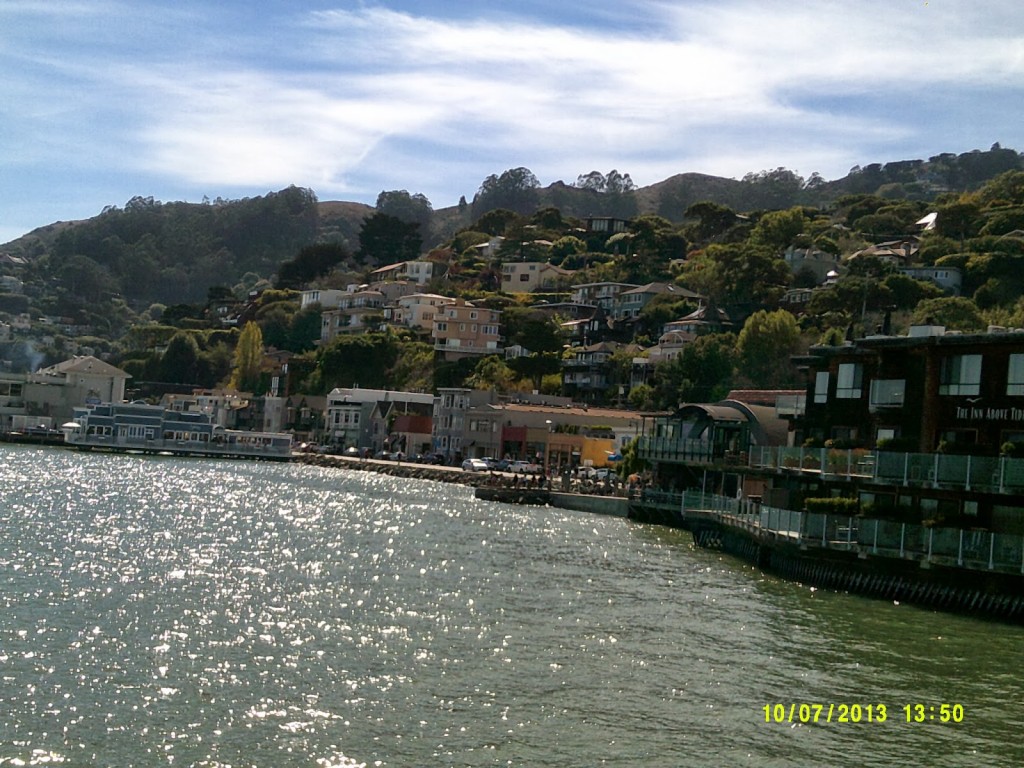 It was about this time the shop called.  Turns out our a/c problem is worse than we’d thought.  There’s a leak that will take 5 hours to fix, and they can’t get it done today. We don’t want to wait another day,  so we just got them to recharge it and hope it will last until we get home.

Bikes are a huge deal in San Francisco, much like all the other west coast cities. In the city, it was all commuters, and then, on the waterfront,  it was all tourists. There were so many cyclists and pedestrians, it was hard to cycle the first half of the Golden Gate bridge, but after that it was smooth sailing. 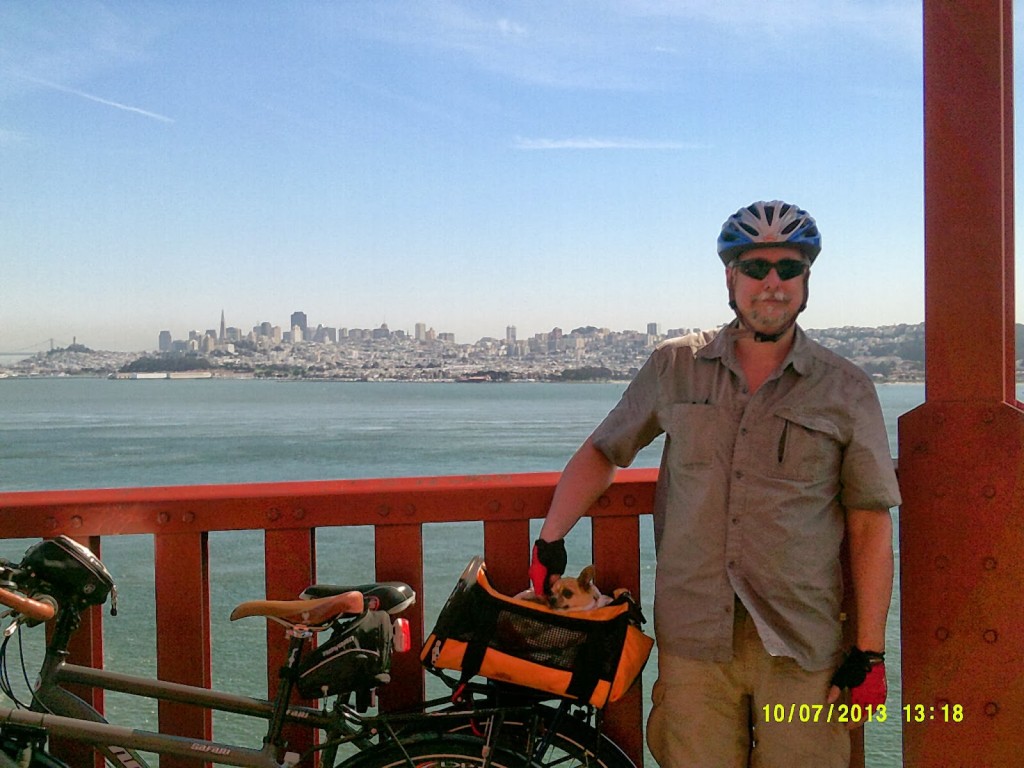 Once off the bridge we had a short trek up the hill and then a longer,  fun, curvy ride down to Sausalito. Fun for me at least, Harold’s back brakes broke part way down, and he had a less reliable ride down. I’m glad I didnt know until he got down or I’d be afraid he’d break his neck.

We’d have loved to stop for a drink and lunch in Sausalito – such a cute little town sandwiched between the cliffs and bay – but we were concerned with getting back before the auto shop closed. 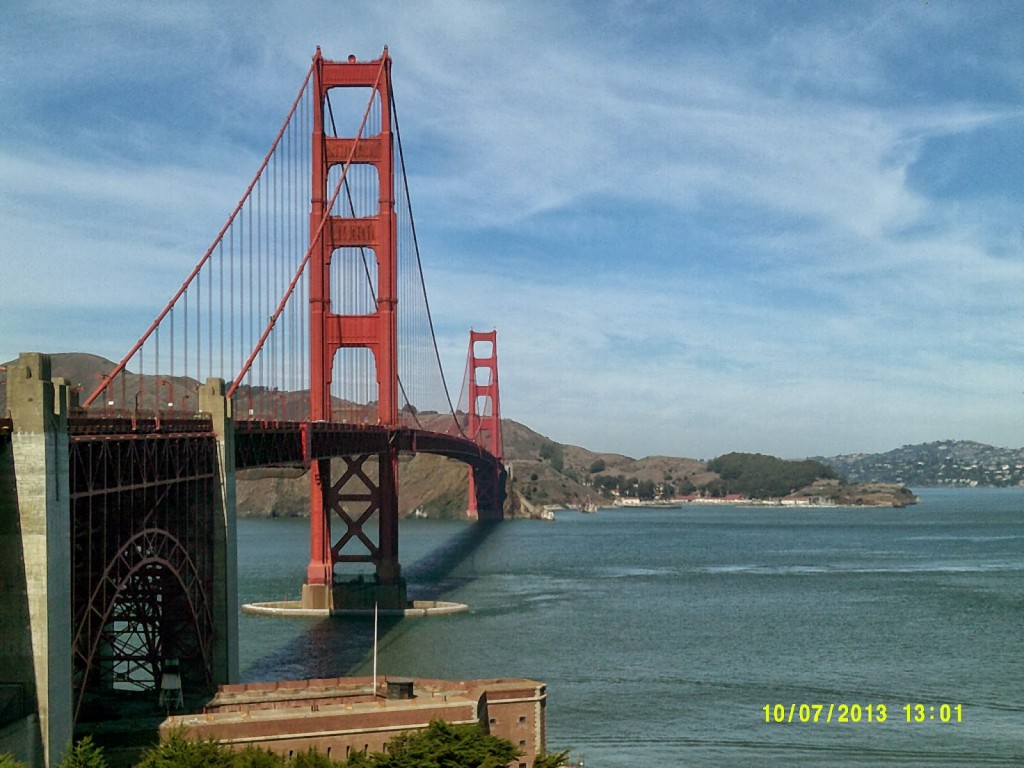 I zipped Toonie into her bag, and got into line behind the droves of cyclists waiting for the ferry. We all put our bikes into the racks at the back of the boat, and everyone went up to look at the view. I stayed down to watch Toonie, but still got a good view from down below.

Toonie popped her head out a few times, and eventually I figured I’d just let her. Not like they could kick us off. What could they do? Make us walk the plank? On the way out everyone was cooing at her and none of the employees said even a word about her. 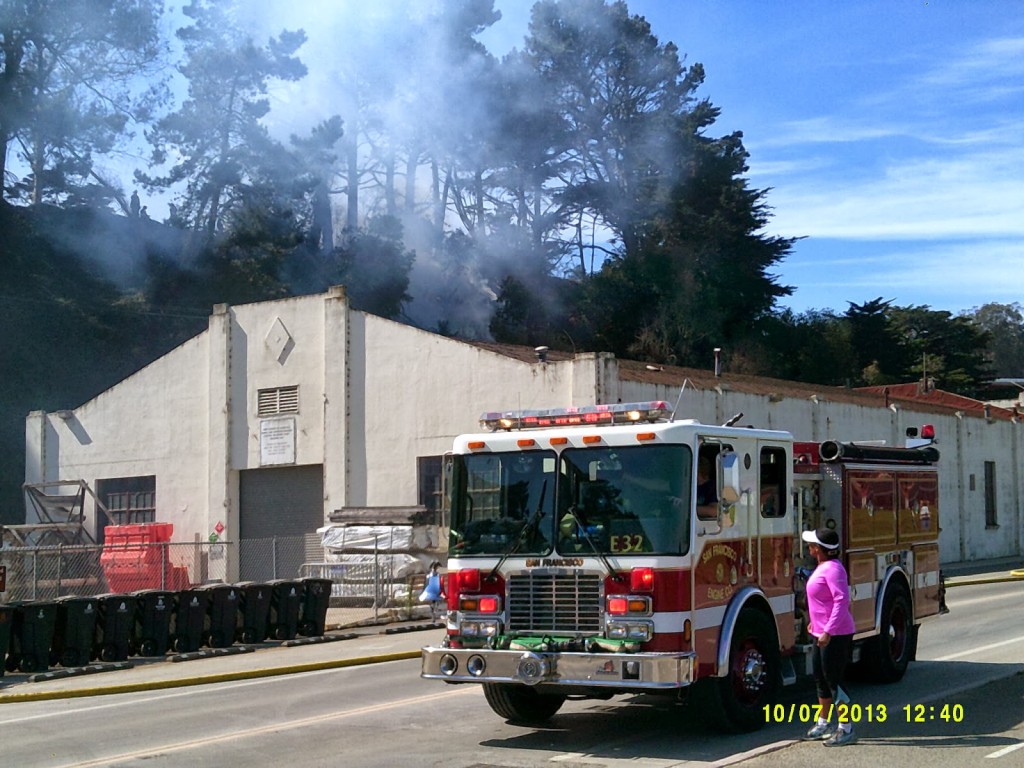 We cycled back across town,  but there was no way we could get up the top portion of that San Francisco hill. I did see one guy do it, but he was a bike courier, and covered in muscles. We were quite happy to walk up. We got back to the shop earlier than expected, with lots of time to spare, paid up, and headed back to our temporary home. A great day! 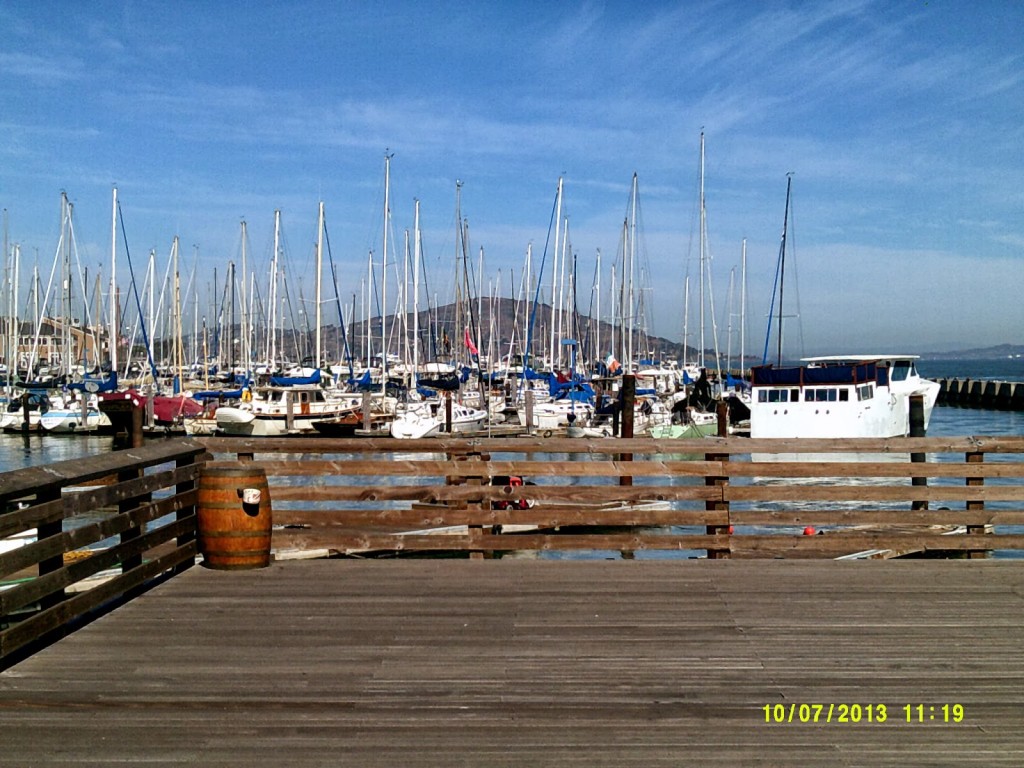 Chariot in the mud flats