We hadn’t disconnected from the trailer so it was a really quick exit from the berry farm, this morning. We were within 20 miles of Santa Cruz, and on the lookout for a Walmart or Safeway. I searched Google maps but couldn’t find a Walmart anywhere nearby, so we were absolutely shocked when we saw a Costco coming up on our left. “Left! Left! Turn left!” I exclaimed, and hot damned if Harold didn’t respond immediately, jumping us on over to the turning lane in time to make the turn on the green light.

We took another turn, a road too early and had to stop to ask for directions from a woman with short, cropped, neon, fire-engine red hair. I had to wonder, knowing how quickly red hair loses it’s luster, and how quickly her roots would grow in, just how often she had to  re-dye her hair … but of course, I couldn’t ask … I was listening to directions. Harold started off again, just as some idiot woman jumped out in front of us, from the other side. He stopped almost before we’d even started, but that didn’t stop her from yelling at us, scrunching up her face, and balling her fist at us in anger. Made me wish we’d just hit her. But that would have slowed us down. 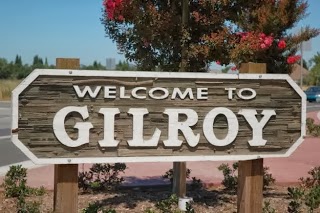 We hadn’t had breakfast and it was almost lunchtime, so we allowed ourselves to do something we never do at home. We ate at Costco! We had a hotdog and lemonade, and a slice of deluxe pizza, all for the low price of $3.00. How can you beat that?

We cruised through the farmlands where most of our produce comes from, and as we approached Gilroy, I could smell nothing but garlic. It was so intoxicating. Arriving at the RV park, we couldn’t help but notice this one was more of a full-time place. Most of the rigs were quite old and looked like they wouldn’t be movable. A few were so full of junk, it was spilling outside. It was a depressing place.

I had called the day before to make sure they had room for us, and the manager told us he had no room for Thursday night as he had a group coming in for the weekend. I asked about just Wednesday and he figured that would be okay. So when I came in the next day, and he asked me how many nights we wanted to stay, I was a little taken aback as I said “Two?” and he responded, “No problem.” We pulled into the site, and plugged ourselves in, and were out again as quick as we could.

Up the road a bit was our first destination, the historic old town of Gilroy. I’d been through here 12 years ago, when Cairo was in Grade 1, and I’d thought the town was so cute. Calling itself the “Garlic capital of the world”, it was very worthy of the title. The whole town smelled of garlic, and everything in it, all the stores in the downtown sold every imaginable sort of garlic, even garlic ice cream. It was surprisingly tasty.

I was so disappointed, this time, when I couldn’t smell anything, upon getting out of the truck. I kept telling myself that we just hadn’t got to the area yet. But as we got further I noticed the stores were now empty, and the town was like a ghost town. I asked someone what had happened to the town, but of course, it’s the same thing that has happened to so many small towns in America. 2008 is what happened. 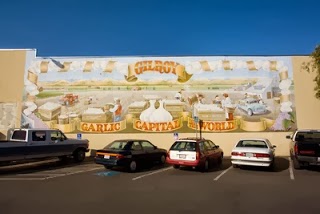 We drove out of town, to find the new areas that cater to folks who live there, thriving. It’s the tourist area that hasn’t come back. We stopped at a winery down the road to taste some wines, and they told us there have been stores that moved in and tried to start up the tourist trade again, but they all fail eventually.

We drove around the countryside for a while, past many, many vineyards we didn’t have time for, then drove down the highway to Salinas, the birthplace of writer and Nobel Prize laureate John Steinbeck, where he based many of his novels. There was a touristy looking area there devoted to Steinbeck, but it was mid-construction, and nothing else. We didn’t find it stop-worthy so kept driving.

On the way back, we saw an In-N-Out Burger, one of two burger places I’d told Harold I want to try, if we see it. (The other being a White Castle, only due to the movies) I swear my parents told me they had fantastic burgers, but we just found them okay. Cheap, but okay. What we found most interesting, was their minimalist menu. A double burger, a cheeseburger, a hamburger, and fries. Those are your only choices for food.