I haven’t always treated him right … I’ve dragged him, dropped him,  frozen him,  tried to drown him … smashed him, bashed him, ranted at him … and made him follow me wherever I go, demanding he do my bidding, whether by boat, plane, bike, car, or on foot. I even let my daughter mistreat him. We’ve taken him for granted,  but he just kept trudging on, happy to just let us push his buttons. This time though, I worried this was it, he’d left for good. 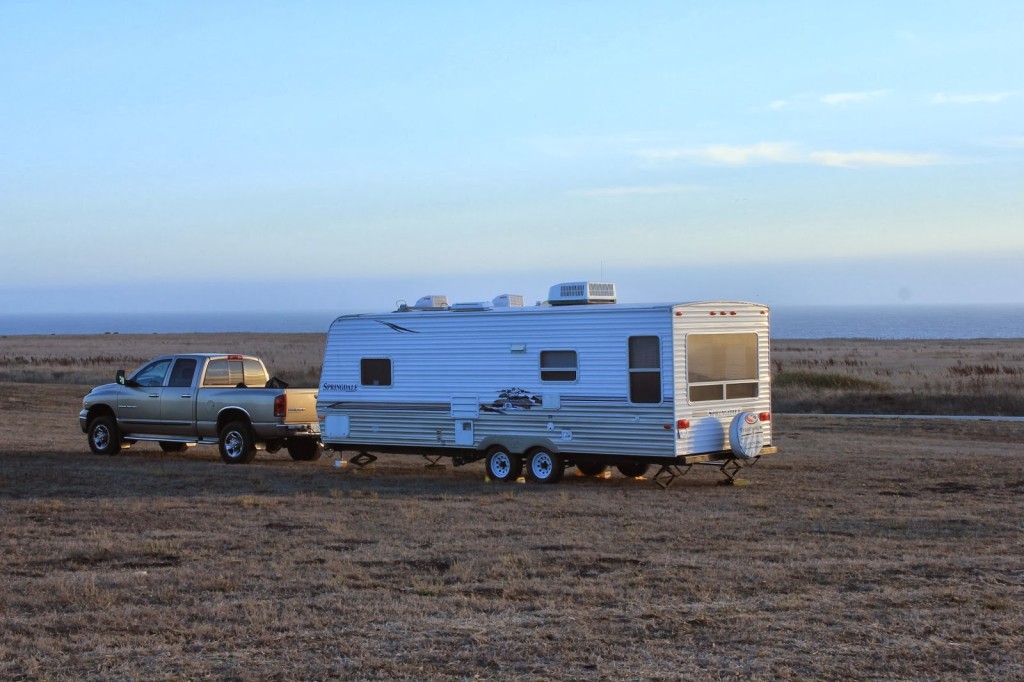 Imagine my joy, when he showed up again this morning, no worse for wear, in the exact same shape I’d left him in, no important bits missing, ready to do it all over again with me!

I know what you’re thinking.  No, I’m not talking about my husband. I’m talking about what my husband found sitting right under my seat in the truck. My camera! I swear we both looked under and around both our seats multiple times,  but it must have been stuck on the side where we couldn’t see it and it finally got loose. I’d promise I’ll treat it better this time around,  but I probably won’t. 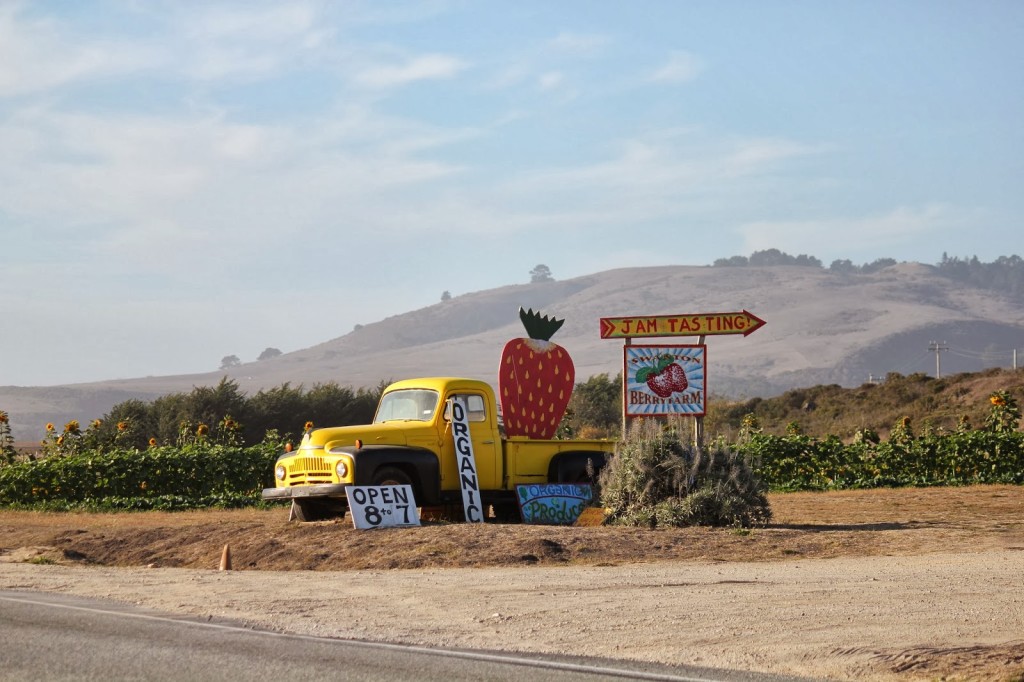 We got ourselves unshackled from our Rv connections and headed out.  The park we’d stayed at was in a good location,  where we could select to go south across the Golden Gate or east, then south to the Bay bridge. We chose the Bay bridge since traffic reports showed it as better, and we knew from the day before how bad the construction was after the Golden Gate.

It was all great until we got to the toll bridge and realized our error. The toll stations were all out at the Golden Gate so there was no toll and you get right through. On the Bay bridge we had a 30 minute wait and a $20 toll. Yeah, yeah, chump change, but still we coulda had it free! 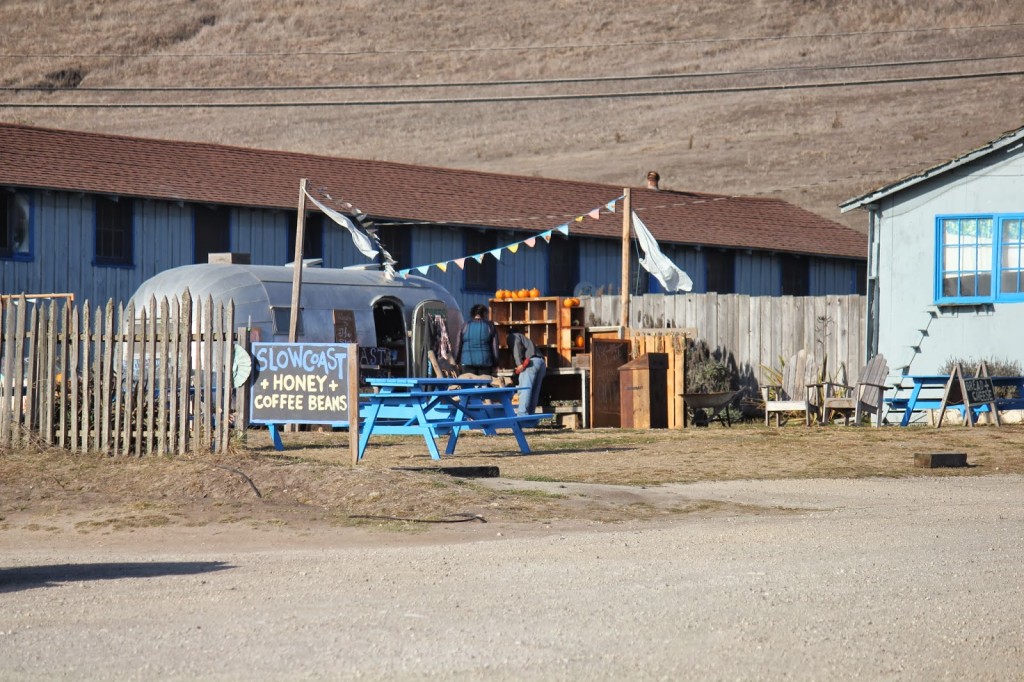 The Bay bridge took us from Oakland over to San Francisco where we could head down south, towards San Jose, and then cut over the hills to the coast. It was still morning when we got to Half Moon Bay, and the beaches were covered in fog. Everytime I’ve visited this area, the mornings have been foggy, and the afternoons have been nice and sunny. By the time we arrived at our destination, the sun was already out, but the wind was still up, keeping things blustery. I call that temperature ‘Harold-hoody weather’, since my southern boy husband feels the cooler temps more than me, and needs his hoody. I was fine in just a tshirt.

This place, Swanton Berry Farm, is our second free spot we’ve been able to stay at due to our membership in Harvest Hosts. This one was quite different to the winery we stayed at a few days ago. First,  we couldn’t reach anyone to see if they had room for us. I sent email a week ago and never heard back, then called and left a couple messages, none returned. We figured we’d just show up and if they told us to get lost,  we’d find another place. 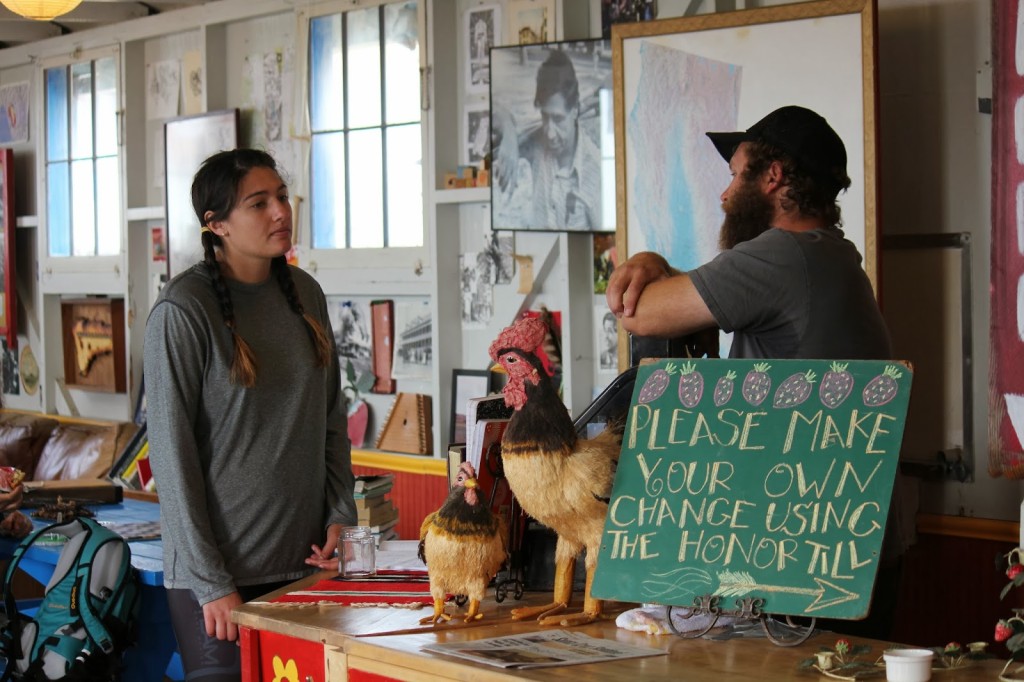 The farm is all on its own, in Davenport, Ca. We drove into the yard, where we saw a few cars and an Rv in  the parking lot. I went inside to find a little cafe/store, where they sold coffee, drinks, pies, soup, and jams. They had baskets if you wanted to go pick berries, but nothing on the sign so I figured there were none for picking this time of year.

I looked for someone to ask about staying, but everyone in there were patrons.  They had a self serve pay station all based on the honor system. Pay what you owe and make your own change. I admire systems like this.  It makes you recognize, most of us are just really decent, especially the sort of people who frequent hippie style organic berry and veggie farms, and only a rare few will steal. 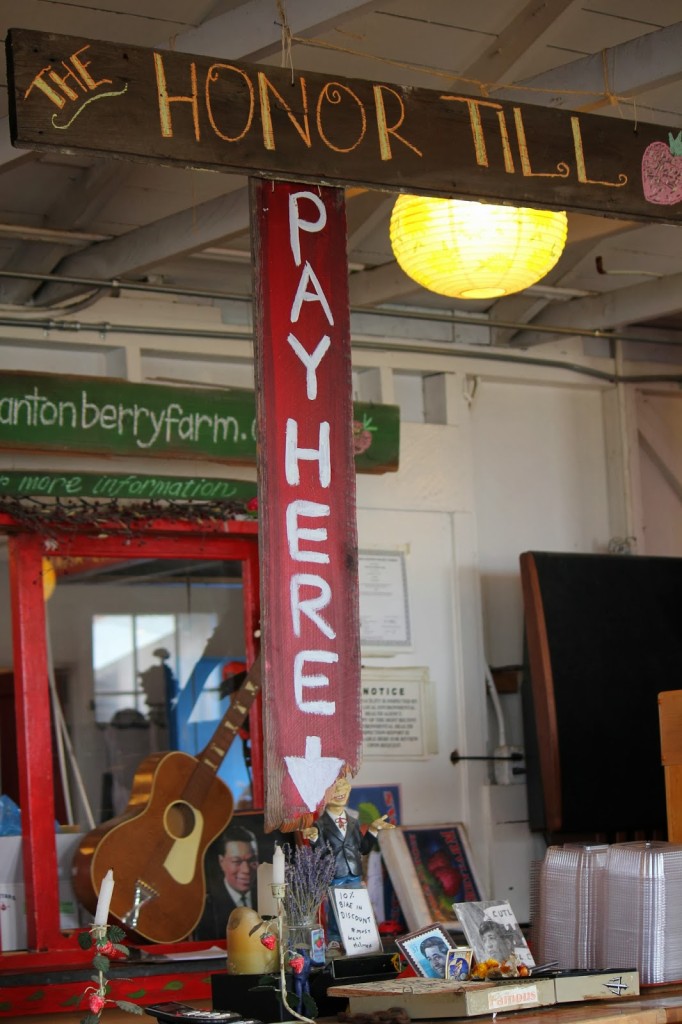 The woman who sold local handicrafts outside from a small airstream trailer couldn’t help me, except to tell me I should knock on the door to the kitchen. Oh, and she had a perfect trucker shirt for me. “They’re all the rage!” She told me.

I went back inside, knocked, then swung  open the kitchen door. Two Hispanic women were inside working. They stopped and looked over at me. I asked them about Rv parking overnight, and they didn’t understand what I’d asked at first, but then told me “Oh! Park over there!”, pointing towards the south side of the building. 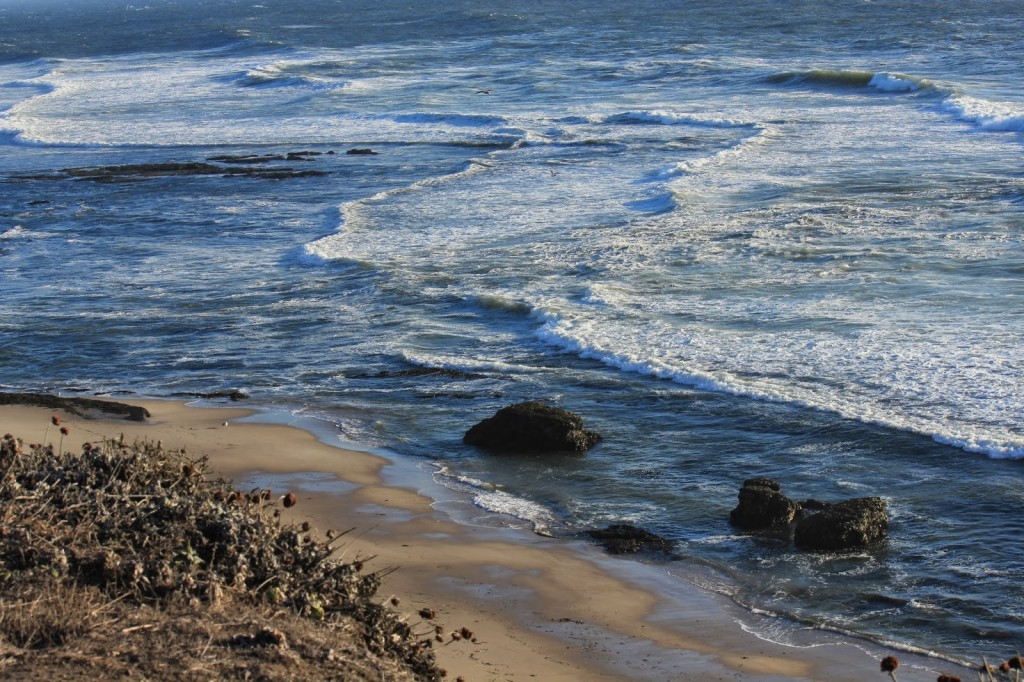 I wandered out into a farm lot full of equipment and tractors and vehicles and just knew this would never work, but then over behind the buildings, I found a pasture, with hard, packed ground. A sign read “Secondary parking lot”. This must be it.

We set ourselves up facing the ocean. Oh, did I forget to mention that? The ocean is right across the road, just some pastures between us and the Pacific. We worried it might be a mistake to face that way because of the wind but decided to chance it and fix things later, if necessary. For the rest of the day and night, the wind came from the north so we were perfectly situated. 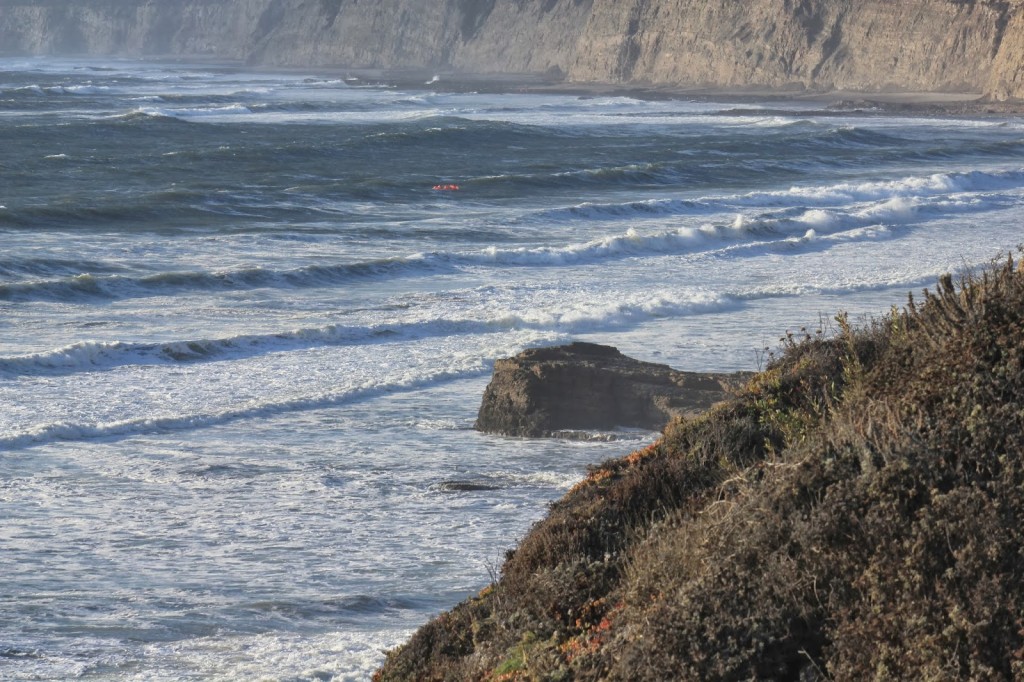 A three minute walk down the road was the most gorgeous beach, with huge, crashing waves, and soft sand our feet sank into as we walked. There are a few homes down there and a community beach. As we left to head back, we saw a few surfers arriving.

Up at the berry farm again, we decided on two bowls of chowder full of cauliflower, potatoes, and other veggies. It was very tasty and filling. I was tempted by the berry pies, but instead we bought a jar of their strawberry jam, after tasting them all at the jam tasting station. We headed back to the trailer where we whiled away the afternoon reading and exploring the cliffs along the ocean. 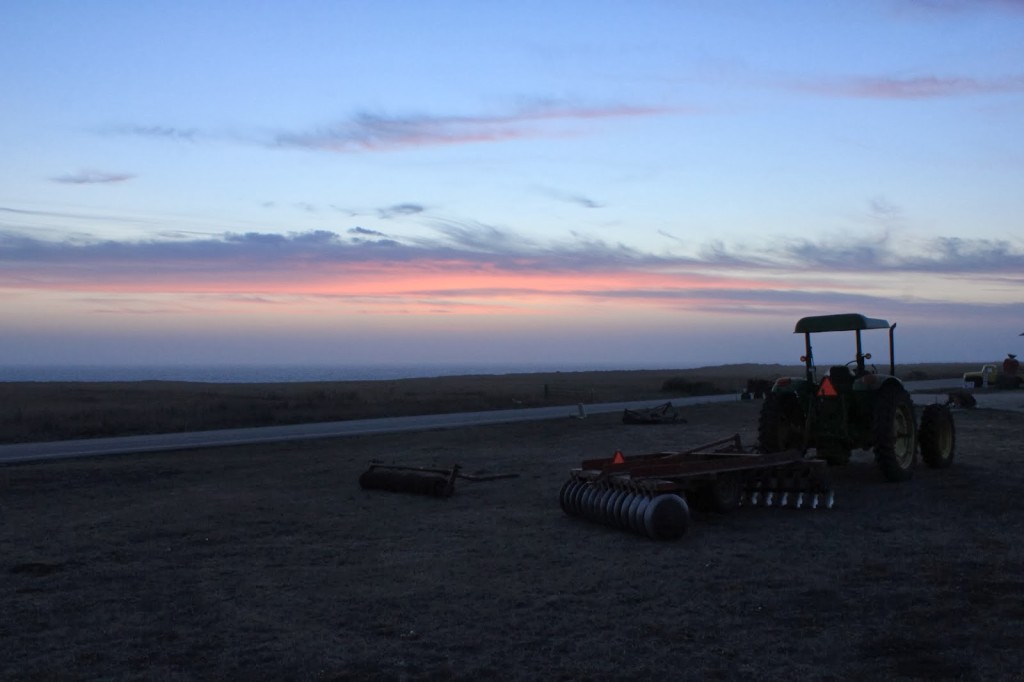 Harold had noticed one of the farmhands dumping vegetables in the compost and went over to check.

“They have loads of cauliflower and broccoli over there!” he told me, “Should I grab some?”

I was resistant to the idea until he brought back three heads of perfectly good cauliflower. The broccolli was too wilted to use, but the cauliflower was fantastic. We had some for an appy with a salsa dip Harold made up, then the rest in a curry. I felt like a part of a cooking show where we had to use one item, the found cauliflower, in multiple courses. I figured,  to win, Harold needed to mash and bake some of that cauliflower into a crust we could slather with some of our strawberry jam …. a kind of strawberry-cauliflower tart. Harold wouldn’t go for it. He was just proud of our entry to the Freecycle movement.