Las Vegas – Miracle In The Desert

We were told we couldn’t check-in to the Main Street RV park until after 2pm, (don’t fall for that, just pull-in to the RV lot and wait to check-in at 2) so we spent the morning in Primm doing laundry at the Truck Stop and working. We didn’t have our stabilizers down and there were so many trucks coming through, the trailer was rocking back and forth. Then there was the wind that blew the sand all over the exterior of the truck and trailer. I have no idea how much filth was picked up yesterday along the highway and how much was thanks to this parking lot. Either way, we were pretty nasty looking.

On our way out of town, I saw the RV area at Buffalo Bills, and realized Harold had got it all wrong. It wasn’t the deserted and wrecked parking lot we’d seen last night, it was off behind the building, in a much nicer area full of RVs. I resolved then and there to always make sure I’m the one to go in and get instructions, in the future. It’s more my forte. 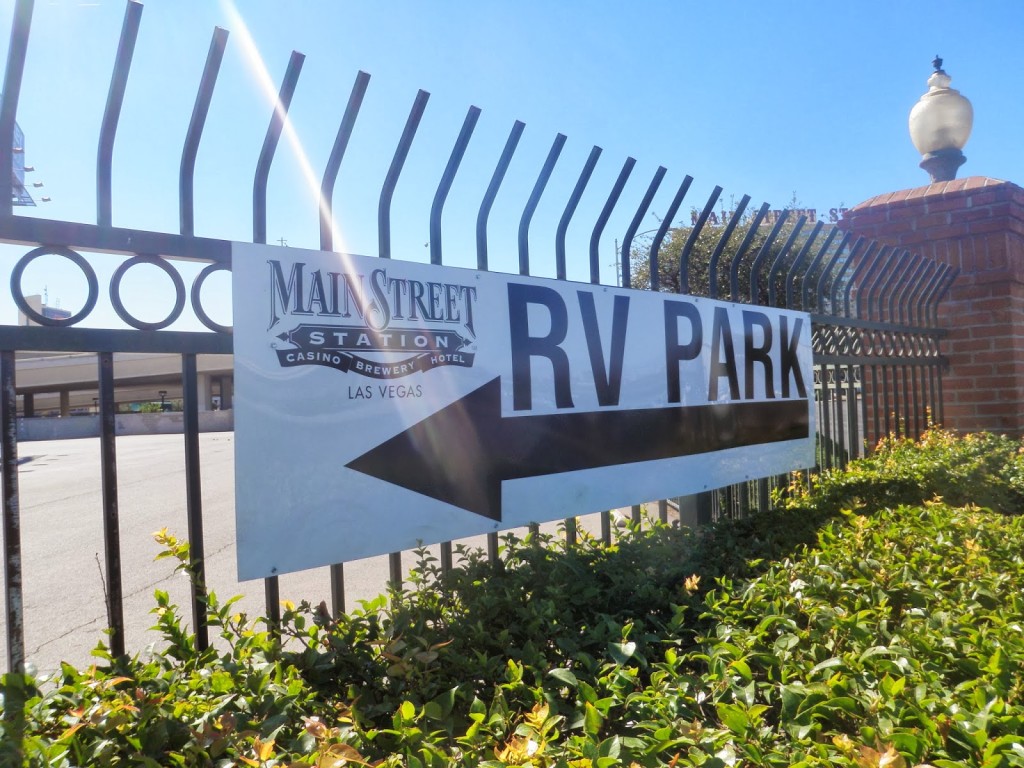 We arrived in Las Vegas early and had to drive around the downtown twice before we were able to find the driveway into the RV lot at Main Street Station. It’s not much more than a parking lot alongside the highway, but at $16 per night, and a block from Fremont Street, it’s a fantastic deal. We pulled into our designated spot and I walked around trying to find where to check-in. Unsuccessful, I went back to the trailer where we met our neighbours, a retired couple from Campbell River, BC. The wife brought us over some home made soup she’d made too much of, for lunch, and it was really good. She and her husband seemed hungry for hometown conversation, and seemed disappointed when we admitted we don’t watch hockey.

It was well past 2pm and we’d still not seen anyone to check-in with so I asked our friendly neighbours and they told me I had to go into the hotel. D’oh! Of course. As I was heading out, I noticed another neighbour pounding a sign into the ground beside his RV. In big, red letters, it said:

“Pick up your dog shit! This is DISGUSTING!”
There was an arrow pointing down to the ground where there was a pile of dog poop. I found it amusing that he spent all this time creating his perfect little sign, rather than just picking it up in two seconds, but I did understand his disgust at the laziness of whomever didn’t pick up after their dog. 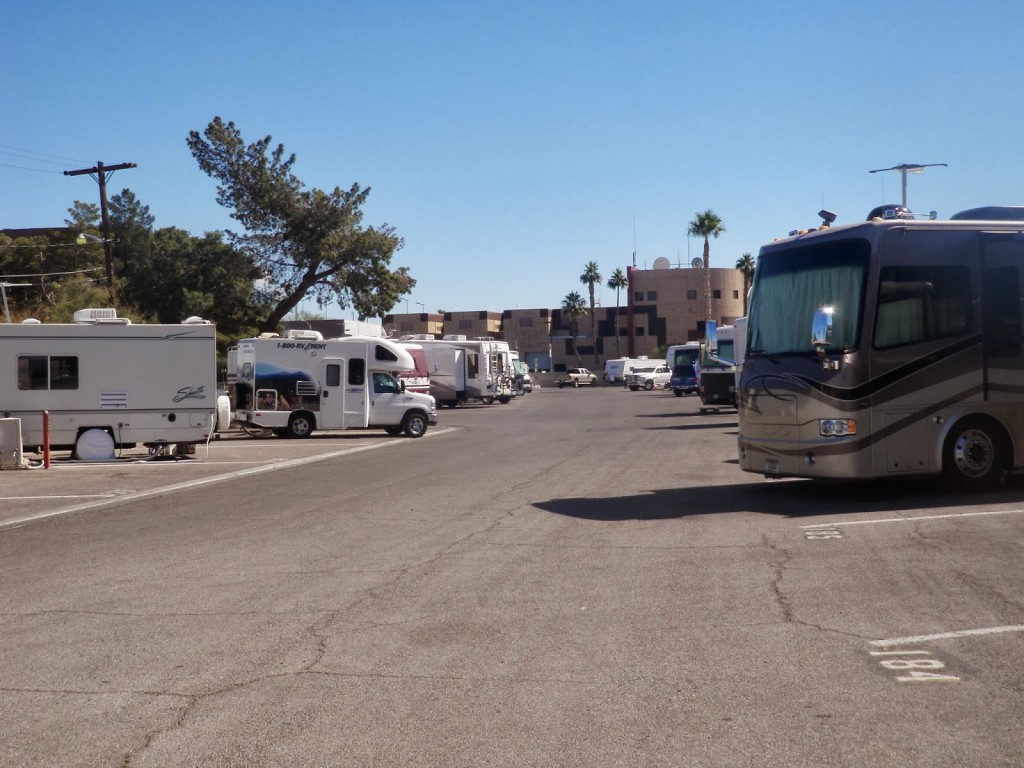 The maximum length of time you can stay at this RV park is 14 days. This is by city ordinance and is meant to stop people from living there full-time. So it amused me even more that he had decorated the outside area so perfectly around his RV. He had fans and flags and decorator bikes positioned just perfectly and his tow vehicle had been custom painted to match his RV, even with the swoopy racing stripe down both sides. Both gleamed with cleanliness. I can just imagine what he thought of our truck and trailer all grimy with desert grit and sand. I tried to work my charm on him and commiserate with his angst over the excrement but he was just an old grump and was having none of it.

The Main Street Station looks like an old hotel and saloon from the days of the wild west, but it was built in 1977 as the Holiday International Casino. It struggled financially and became the Park Hotel and Casino in 1987, then was bought by Boyd Gaming in 1991. Like the California hotel it is attached to by a skywalk, a large numver of the patrons are Hawaiian. Due to the similarity in name, I had always thought Main Street Station was part of the Station Casinos chain, but found out it has never been. It’s also never been a train station. 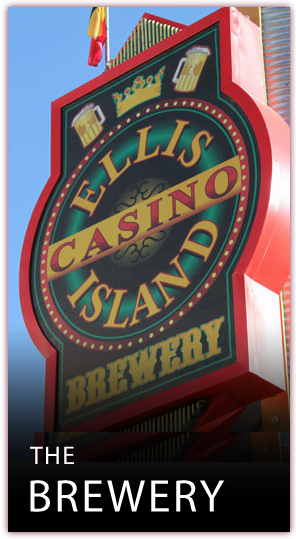 Ellis Island is a small local’s casino located a block off the strip, behind Bally’s and Paris. With plans to meet my parent’s and friends there, we arrived a little early so we went to the Player’s Club desk to get points cards. The cashier told me we had to put a dollar in and when we’d gone through that we could get our perks from the Players Club machine. We were in a hurry to meet up with my parents so I picked the biggest, flashiest machine, planning to lose my $1 on the first pull. Much to my surprise, the machine started flashing and yelling at me to do something. I noticed there was a joystick flashing red and vibrating so I kind of knocked at it and finally noticed the bank of video screens over top of us with an underwater animation showing fish and my rod line that had just caught something and the machine yelled at me that I’d caught a big one! Well, it was $25 but to me, that’s big. I cashed out and went to the machine to get my perks, but it wouldn’t give them to me because I hadn’t lost $1 yet.

We joined my parents along a wall of video poker machines, and put our money in to play and I just couldn’t lose. After a few glasses of wine, the group was ready to go in for dinner, but I didn’t want to leave my machine. I went to the Perks Machine, but couldn’t get my dinner coupon because I STILL HADN’T LOST MY DOLLAR! Luckily, my parent’s friends, who live in Las Vegas had extras.

Dinner at Ellis Island is such an amazing deal. For 8.99 (7.99 with our $1 off coupon) we had a decent size steak, choice of potatoes, garlic green beans, soup or salad, and a 20oz beer brewed in-house. We had a great dinner and then went back out to the row of video poker machines we’d been at before, and I still couldn’t lose. By the time we were done, I was $60 ahead and I finally got my perks on the machine.

We decided to go back to the RV so we could let Toonie out and then walk over to Fremont Street. In the past, I’ve always been a table player, usually sticking to Pai Gow or Blackjack. With my recent success playing Video Poker and the easier time it is to find a machine over a seat at a table, we decided to keep playing the machines. Scouting the casinos, one by one, we’d find the Deuces Wild machines, plunk our cash in, have a free drink or two, then cash out when either of us either:

a) Lost $20 -or- b) Had a big win.
This worked great for us and by the time we headed back to the trailer, I was $200 up and Harold was $100 up. We were also quite inebriated from all the free wine, so we were fast asleep as soon as our heads hit our respective pillows.
Ellis Island CasinoMain Street Station

Blew the budget on wine, so we’re off to Nevada!