The Monterey Peninsula is my favorite place in the world. With the rocky shores thriving with sea life: otters, dolphins, sea lions, elephant seals, whales, cormorants and other birds, the fields and fields of fruit and vegetables, all the homes, from more modest beach side cottages to sprawling mansions looking out over the waves crashing against the cliff sides, there are few places more perfect, in my eyes. 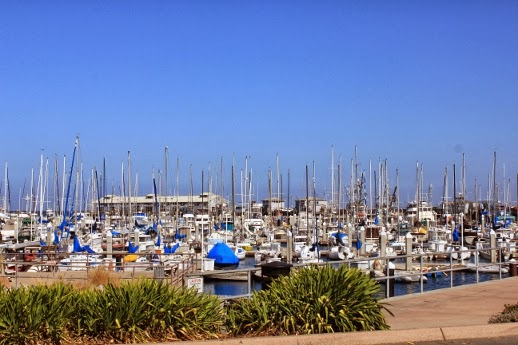 We drove down to Monterey first, and parked near the marina. Harold and I had been wanting clam chowder the last few days since San Francisco, so we were thinking of visiting one of the restaurants out on the pier for lunch. 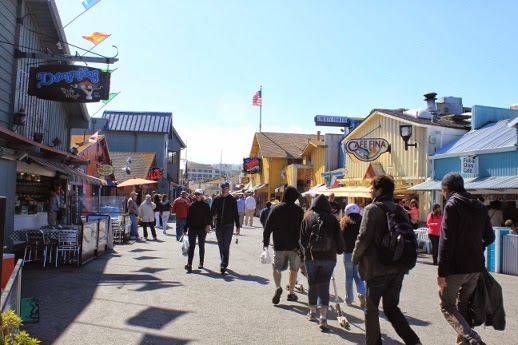 They all called out to us, trying to get our patronage, telling us our dog was welcome on their patios, and offering us a taste of their wonderful clam chowder. They were all just a little different and it was hard to say which was best. One thing was for certain though, by the time we’d had all their samples, we no longer had a need to stop for lunch. 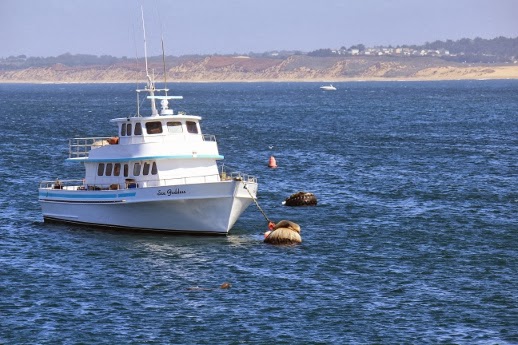 We wandered down the pier, watching the sea lions, checking out the boats, and enjoying a beautiful, sunny, but windy day. Toonie was not enjoying it at all. It turns out she might not make a very good sailboat dog. 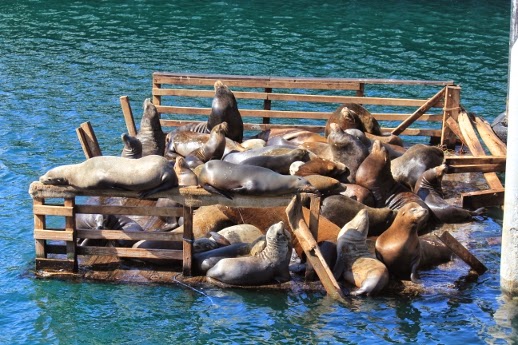 She hates the wind, and cowered from it, shielding her face in my shirt, and was not at all happy when I tried to move her, letting out a howl like I was beating her. It was rather embarrassing, having so many people looking at me, wondering what I’d done to her. 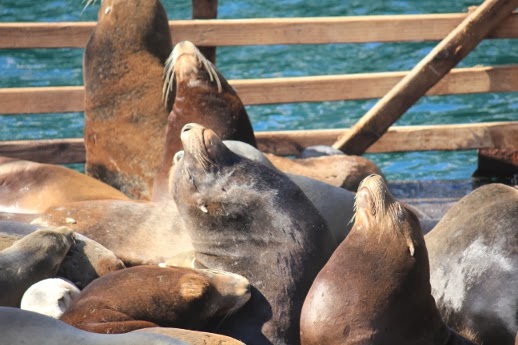 We came upon a man sitting at a public piano. He fell in love with Toonie, especially her tongue. We asked him if he could play anything and he obliged by playing the absolute worst rendition of chaotic banging on keys, for us. He was very cute, in a “I haven’t been sober in a very long time!” sort of way. Surprisingly, he did not ask us for money. It endeared me more to him. 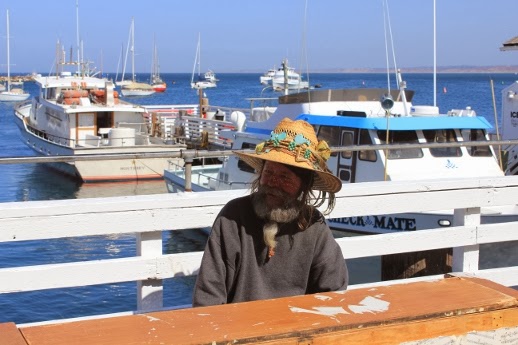 Sea Lions are everywhere in the bay, perched on every flat surface they can heave their porky bodies up onto.

Walking up into the town, we found the streets quiet. There were a few souvenir places, coffee shops, a drug store and restaurants, and my favorite place, Pink Berry! 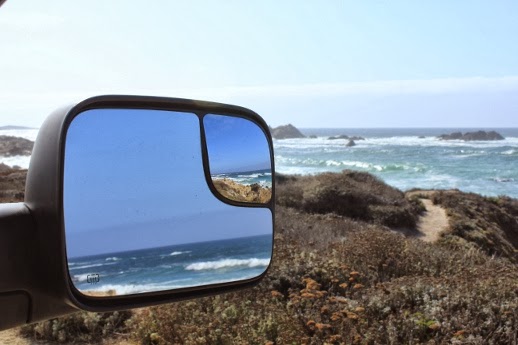 Though similar style yogurt places have opened all over, it’s Pink Berry that I love. I know we have a few at home, West Van, Metrotown, Richmond, and Abbotsford (why does Abby get it and not Poco???) but none close enough to us, so it remains something I only ever have elsewhere. Probably a good thing. 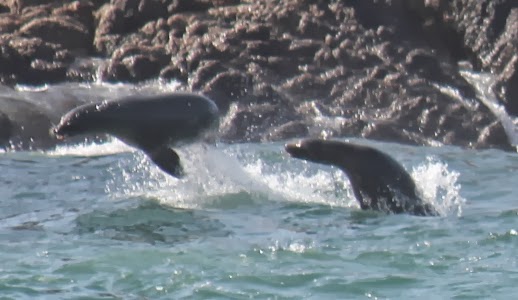 Of course we each had one, and they were just as good as ever. My selections were peach and grapefruit yogurt with pineapple, strawberries and mochi. Mochi is a Japanese rice cake made of mochigome, a short-grain japonica glutinous rice. They are kinda like a little marshmallow, except better. I don’t like marshmallows, but these were very tasty. 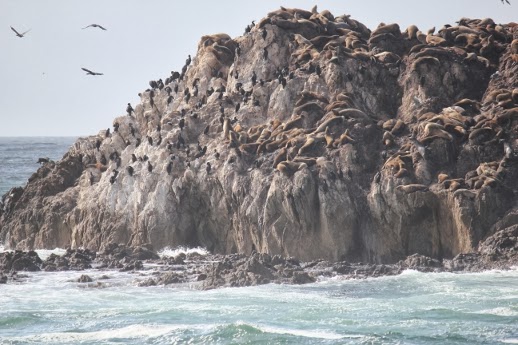 Harold wanted the Butter Pecan, but they were out, so he settled on the original with pumpkin seeds and candied pecans. I thought the pumpkin seeds were a weird choice, but they were actually quite good. So that was our lunch, some tiny samples of clam chowder and pink berry yogurt. 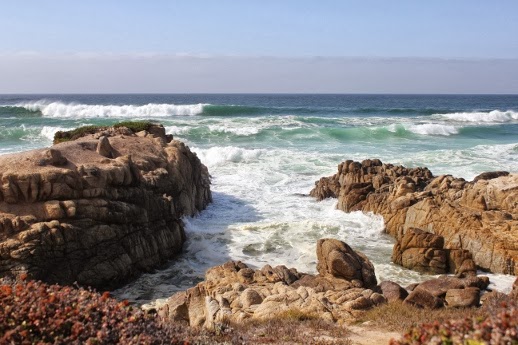 Next we drove down the coast,along the 17-mile drive that runs from Pacific Grove to Pebble Beach. The coast is just so gorgeous and almost takes your breath away, at every turn. They charge a $9.95 fee to take the drive, but it’s definitely worth it, even on my fifth time down.

There is world famous golf here at Pebble Beach. Not our sort of thing, but it makes for a beautiful manicured backdrop for all the rugged beauty. There are trails for hiking and bird watching, and it’s the perfect cycling route. Harold’s brakes still aren’t fixed so our bikes stayed in the back of the truck, unfortunately. Next time, we’ll park the truck.

Seal Rock and Bird Rock sit next to each other. Some of them obviously have their addresses wrong as we saw birds on Seal Rock, and Seals on Bird Rock. 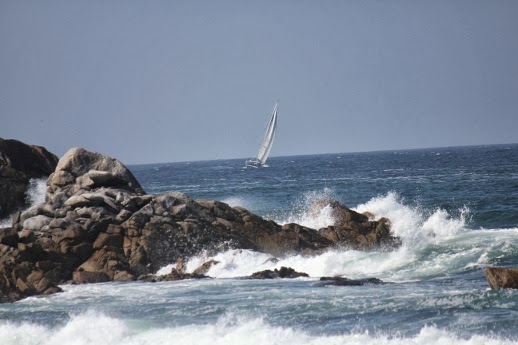 We especially enjoyed watching the seals jumping in and out of the waves.

There are many places I wonder if people take for granted when they live there. You never appreciate places as much as the first time you see it, of course, but there are some places that are just so amazing, you’d have to appreciate them every day. This coast is that sort of place. I bet I’d be aggravated by the tourists driving past my house every day, though.

The Lone Cypress, the symbol of the Pebble Beach Company, has prevailed on its rocky perch for over 250 years. They have put a lot of work into protecting the roots, and it makes me thing of the stump in Stanley Park that has cost so much money to protect. These icons are so much more to us than just trees. 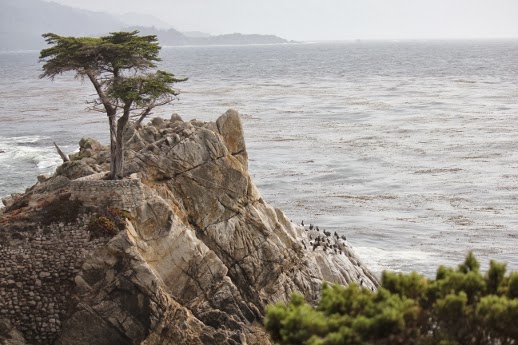 Up at the Lodge at Pebble Beach, we came across a trio of deer munching away just off the fairway. They are completely unafraid of humans. I hope they are welcome there, and not considered pests. 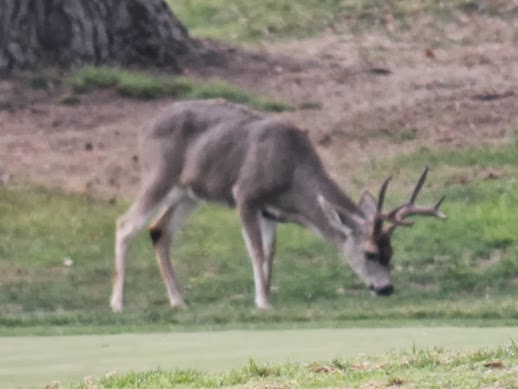 We got down to Carmel, and seemingly forgot to take any pictures. It’s a charming little town, with quaint shops, wine sampling, and many B&B’s. Our only disappointment was the wine shop we chose. They sample only the varieties from the Carmel area, to be expected, so we shared 3 types of Brut, 1 Rose, and 2 Pinot Noirs. We typically aren’t fans of any of them, but I am finding the California Pinots are much more robust than Oregon Pinots. 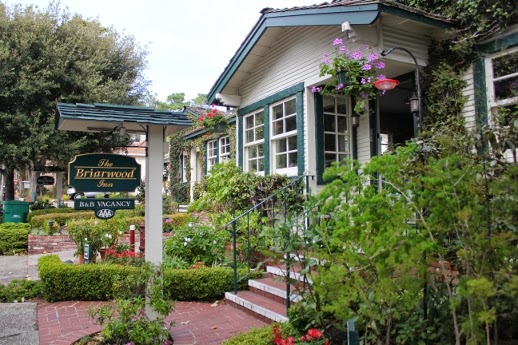 About half way through our sampling, I had an emergency text message from a client so we had to race back to the trailer to get to work. I’m finding that working on the road sounds better than it is. I expect it will be better when we have more time and take things slower, spending more time in each place. It’s hard to pull yourself away from vacation time and race off to work instead, but that’s what pays the bills.