Tonopah, NV: I have a gun! Stay away!

There is this illusion you have about safety in numbers that gets stripped away instantly, when you have some crazy drunk guy running around your trailer, banging and smashing on it, demanding to be let in, in the middle of the night, in the middle of nowhere. 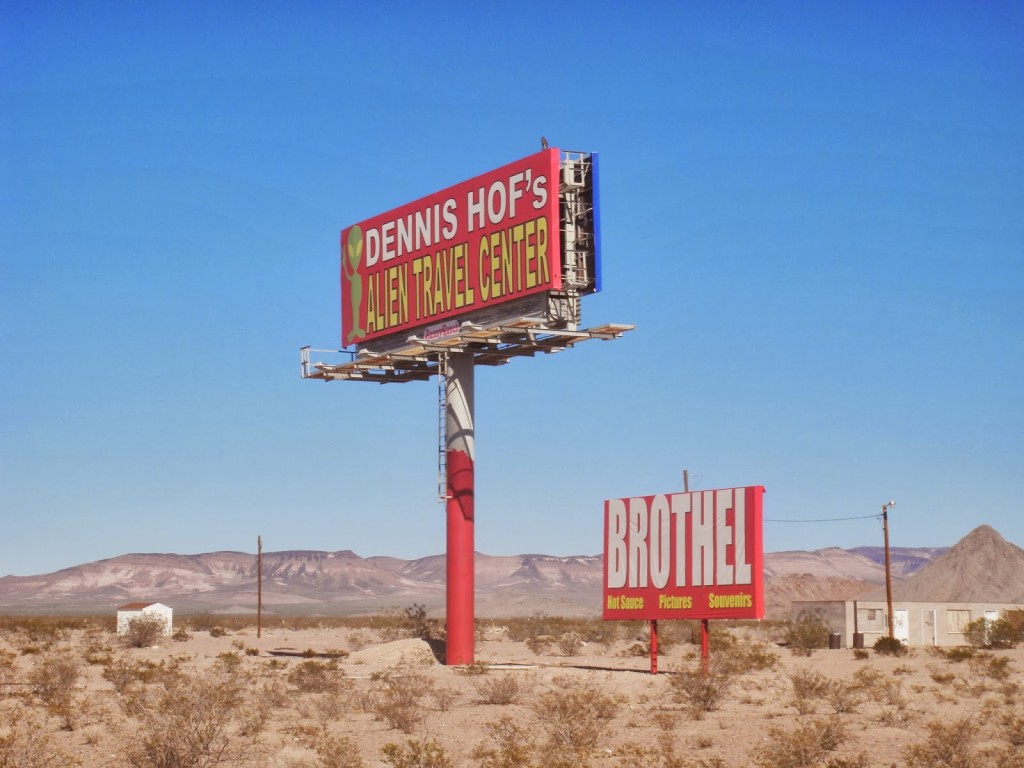 I remember reading a story in a travel magazine about an RV park along the Baja coast that was attacked by armed gunmen and even though the park was full of other people, nobody could come out and help. It was just too dangerous. I know exactly how they felt.

The day had started out with us changing our minds about going to Death Valley. Instead we followed my parents up through Nevada, and settled in for the night midway between Las Vegas and Reno, in the tiny town of Tonopah.

We’d pinpointed two casinos in the town that allowed overnight parking, and since the first one had a lot that was all downhill, we settled on the Banq Club casino on the other end of town. 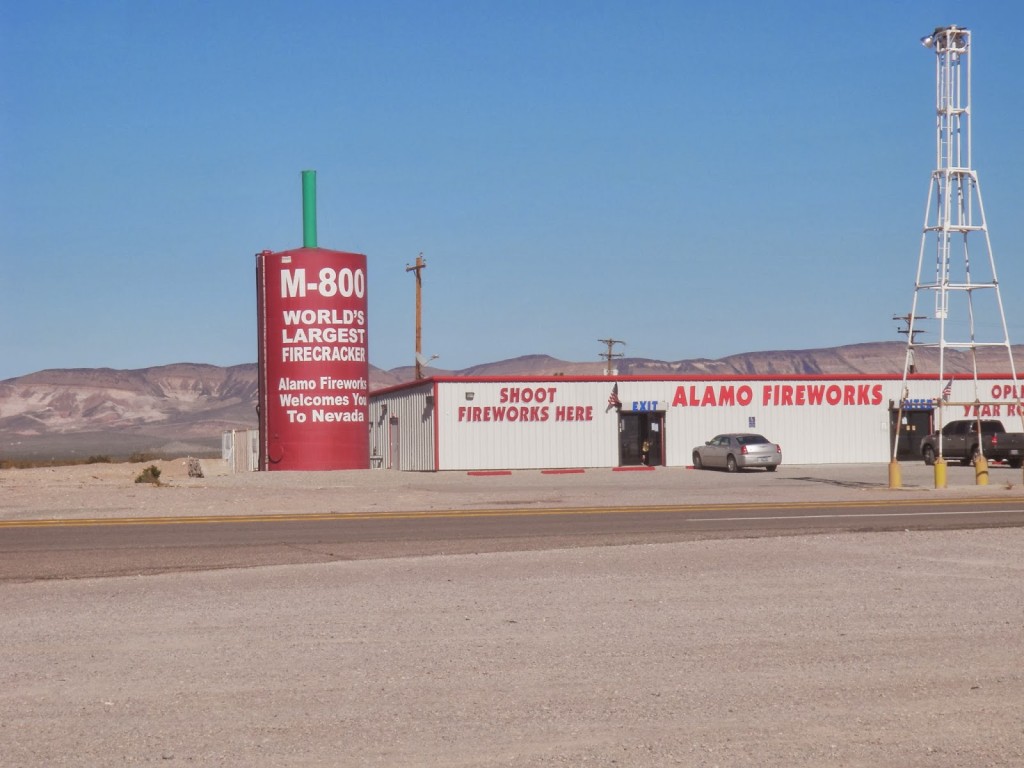 The casino was tiny and run-down, the lot was just a gravel pit with some tumble weeds, surrounded by scrub bushes and garbage, but it was a free place to park, and easy to get into and out of. Well, as long as you were careful coming in over the hump in the driveway. That one was a doozie! Good thing we were pre-warned about it. You could see the scrapes along the pavement of those who hadn’t known.

We arrived about an hour after my parents had settled in, just before sunset. There were about 5 or 6 semi trucks and 4 or 5 RVs in there already. We pulled up beside my parent’s RV and found the most level bit we could. Once we settled in, we went over to sit inside with my parents, where we shared some appies and premixed cocktails. After dinner, we settled in for an early night. It’s not like there was anything to do in the town.

It was quite a few hours later, about 2 or 3 am that we first heard the banging on the door. It jarred us awake suddenly, and I was instantly afraid. Harold went to the door and opened it a bit. The guy outside started pulling on the door and Harold had to fight to pull it closed. 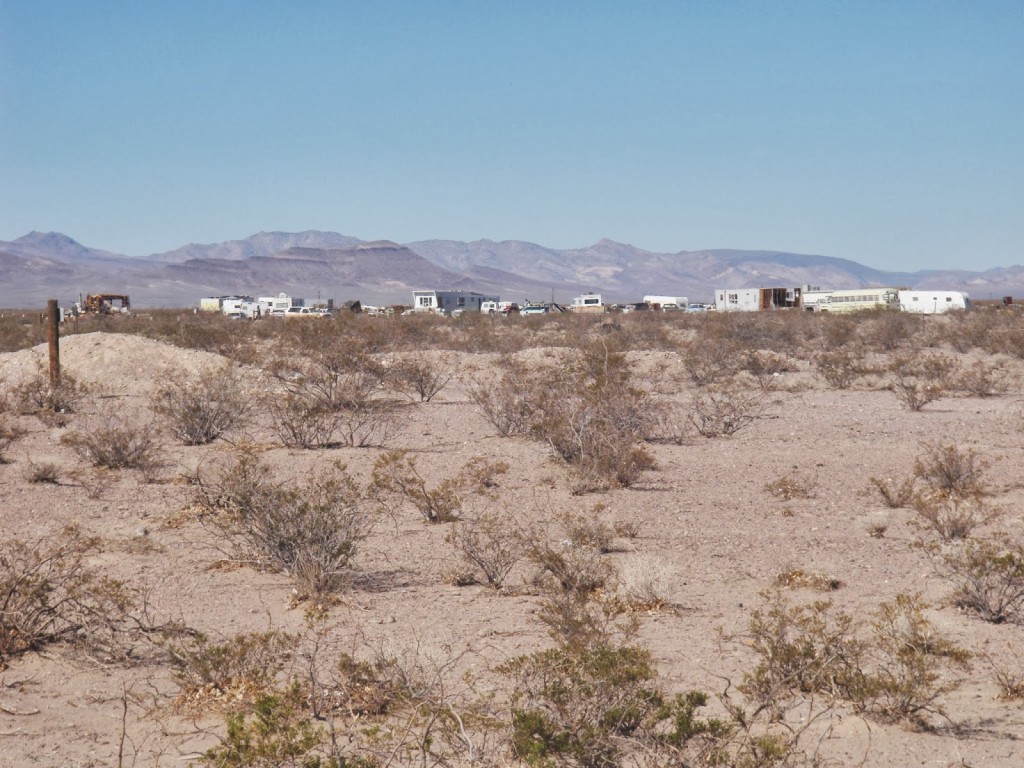 “Joe! Let me in Joe! It’s cold out here!” he slurred through the door.

“There’s no Joe here! Go away!” Harold called back.

“Come on man, let me in.” He whined and wheedled, but eventually he went away and we laid back down again.

Five minutes later, I sat bolt upright as the wall beside our bed shuddered from the man’s fists hitting the side.

“Go away! I’m calling the police!” I yelled back.

He wandered around the trailer, banging on every side, still repeating his whining mantra, “Let me in Lisa! C’mon, let me in! I’m cold!”

“I have a gun! Stay away!” I’m not sure if that was the right or wrong thing to say. To be honest, if I’d had a gun and he managed to get in, I think I might have pulled the trigger. 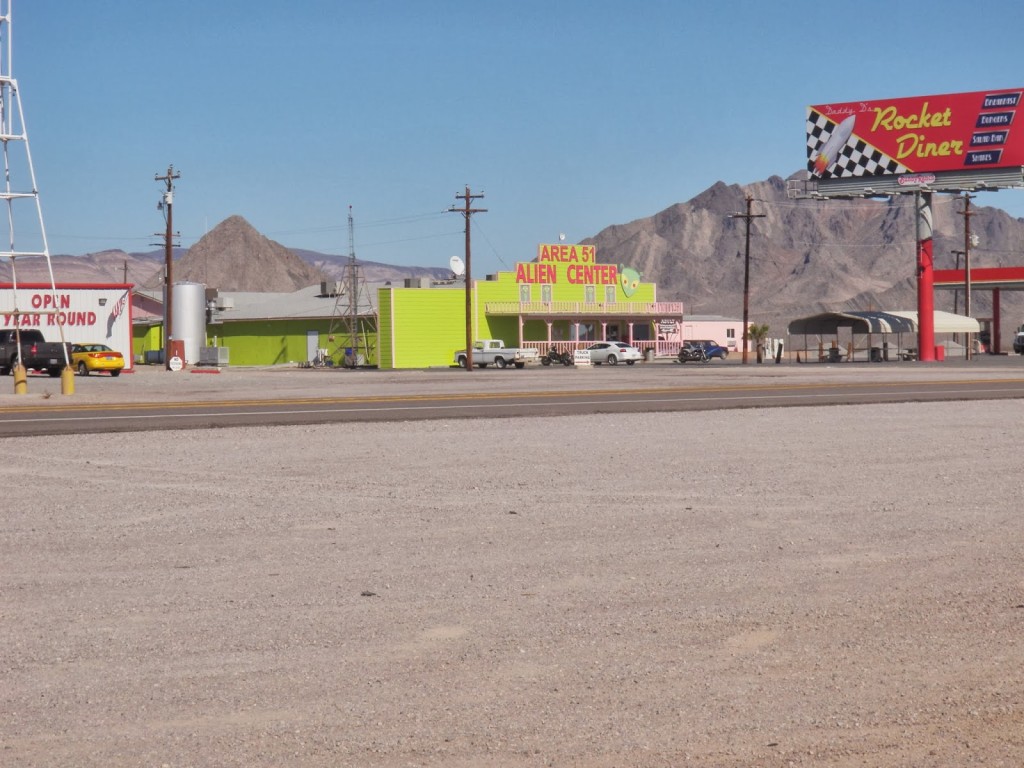 Instead I called the police. The dispatcher told me they’d already had calls from other people in the lot and would send out a policeman as soon as he was finished on his current call. I felt like she wasn’t understanding just how much danger we were in, especially when she told me one of the truck drivers told her this was just a drunk guy, and not a big deal.

She didn’t have this crazy drunk guy terrorizing her in the middle of the night, in the middle of nowhere. I told her just how scared I was, and she was rather cold about it all. I gave up and called my Mother instead, who was right next door to us, but because of the perceived danger, felt miles away.

She had a similar story to tell. The drunk had banged on their door and she’d thought it must be me. They didn’t make the same mistake Harold had though. They looked out the window but all they could see was a dark shape.

“Who’s there?” she demanded.

All she could hear was mumbling, and she was now afraid that it was me and I was either drunk or something had happened to me. Yeah, because I regularly get drunk and sit outside their RV mumbling. But okay, alright, I’ll try not to be offended at the low opinion of what I like to do in the middle of the night. Luckily, before she opened the door to the drunk mumbling mess that was NOT me, he spoke up louder and she realized it wasn’t me at all. Yes, Mother, I am more mature than that!

We watched him through our darkened windows, as he made his way around the lot, banging on each door in turn, trying to get someone to let him in, to no avail. Eventually the police showed up, but by that time, he’d given up and run off. They scoured the area with big lights on the front of the car and spoke to people, but he had managed to disappear. I figured I’d never be able to get back to sleep, but eventually we managed to get a few more hours of sleep before daylight woke us up again.

“I swear Tracey! This has never happened to us before, in all the years we’ve been boondocking!” My mother told me the next day.