Arriving in Quartzsite, AZ a few hours after sunset made it hard to see where we were going once we got outside the town limits. 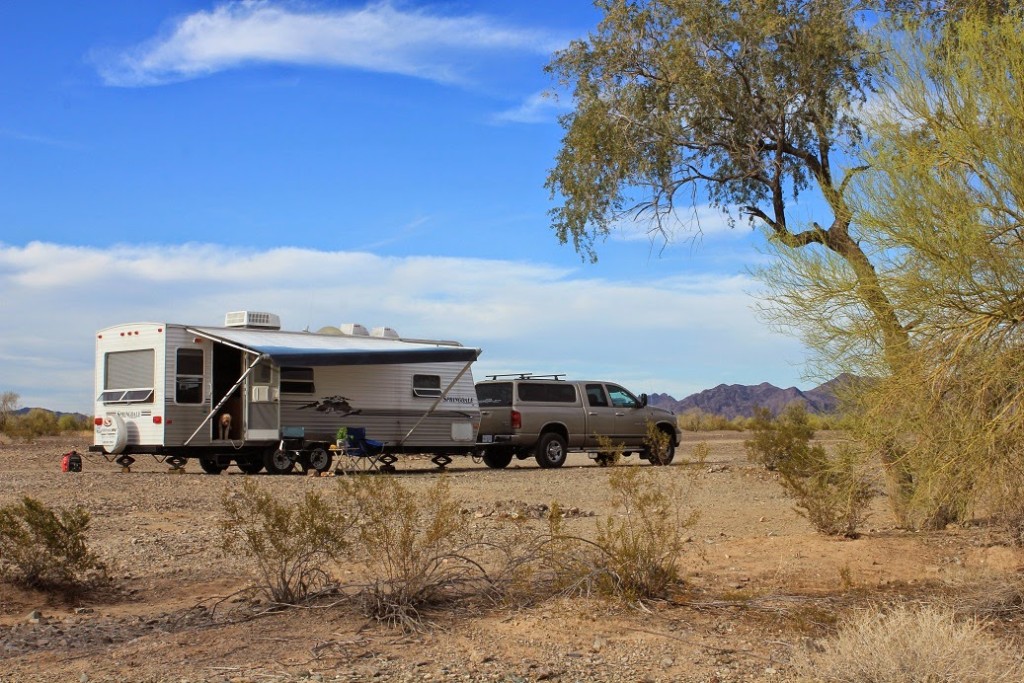 We had chosen to stay at Scaddan Wash, a 14 day limited free camping area on the BLM lands, just a few blocks east of town. I had run through it using Google Street View so I knew the location and how far back it extends, but we parked near the front for the night so we wouldn’t drive down an embankment by accident. 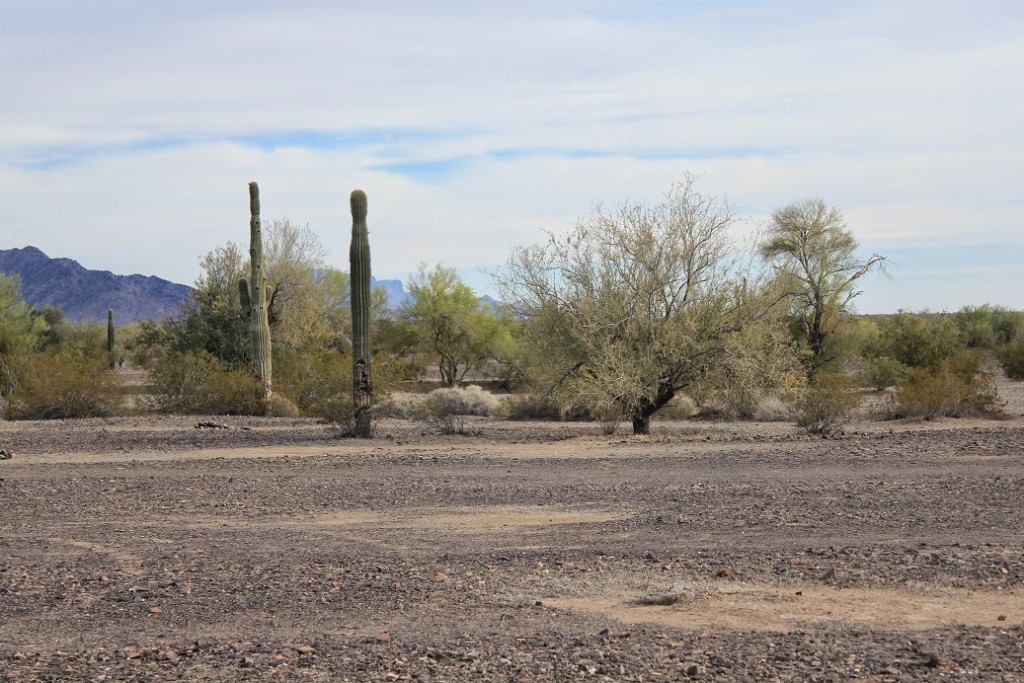 I woke up to hear there would be no morning shower. We’d run out of water. Our water level gauge has never been right, but it was more wrong than usual this time. With previous plans to go to the local RV place to get an appointment to have solar panels installed, we figured we’d just take the trailer with us and dump/refill it in town. 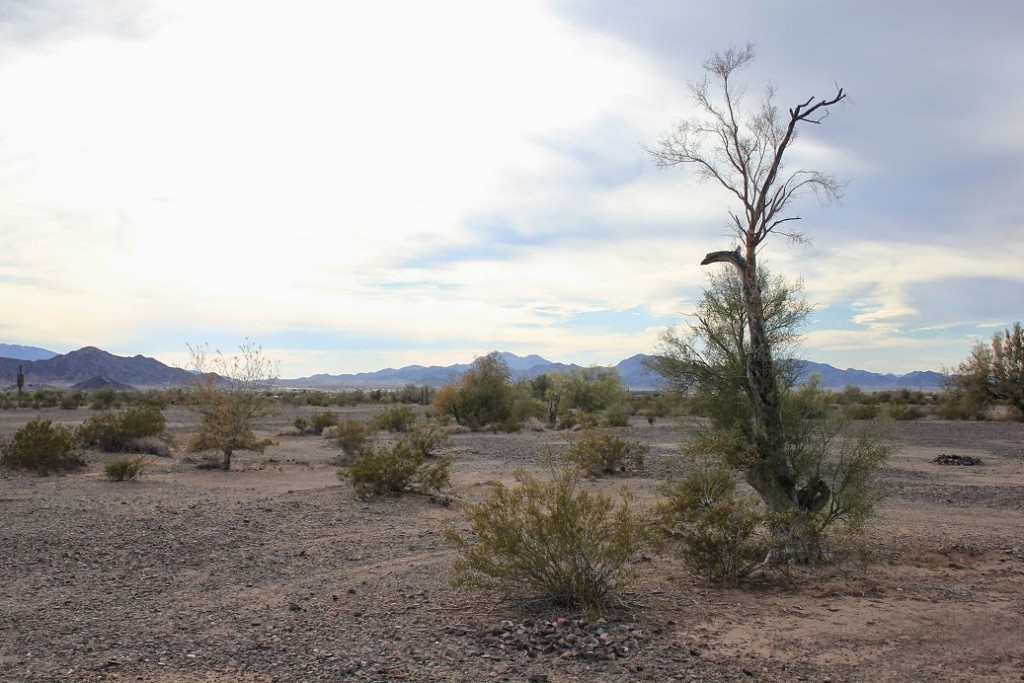 Looking up places on Sanidumps.com, we found it was going to be as expensive to dump/refill as it would be to get into an RV park and hookup. We were wondering if maybe, since it was going to hit 100F today, we should just go into a park instead. But we couldn’t bring ourselves to give up our place out on the BLM, with nobody at all around, for a spot pushed in beside someone else, where we’d sit in a/c all day. 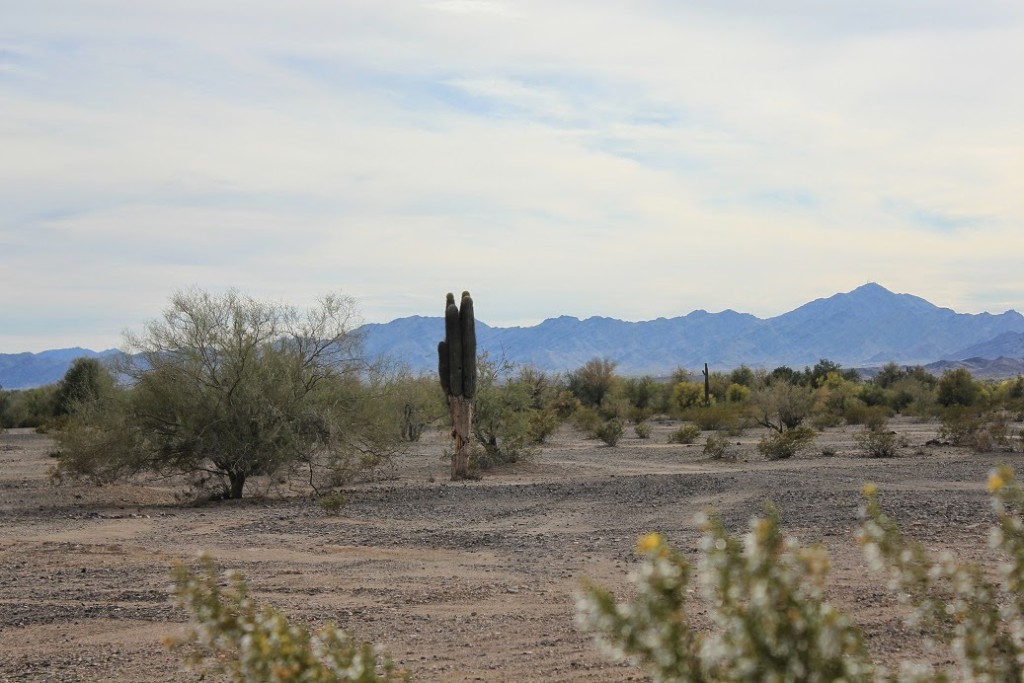 My parents had their solar panels installed for them by RV Lifestyles in Quartzsite, and it’s so much cheaper than at home, so I had emailed them a few weeks ago to ask about prices for what we want and also to find out how far in advance we needed to come in. I was told all they’d need was 3 days, so I’d scheduled us to come in today and then we could go on to Phoenix and come back next week to have them installed. I figured I had it all worked out. Unfortunately, when we went in today to get it set up, the only guy who could help us with the solar system has gone to Texas and won’t be back until next week. Then we’d have to wait another 3+ days after that. It’s very frustrating but that’s life out here, I guess. 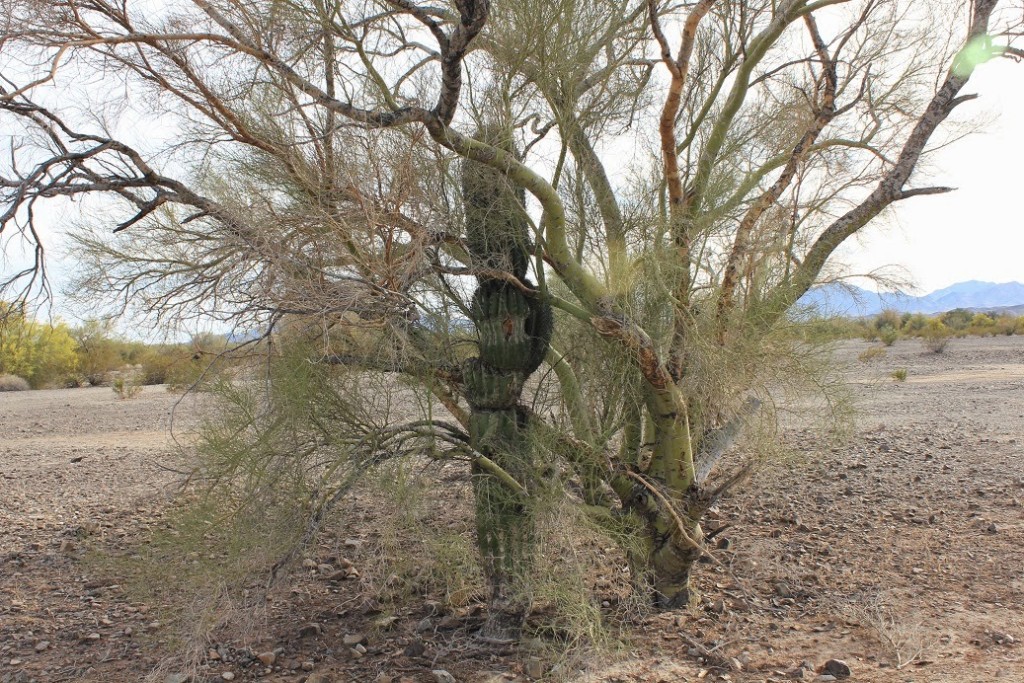 Luckily, we have another option in Phoenix, with a company called Solar Penny. They will sell us the system we want for a good price, and they put us in touch with a mobile installer who will come out to where we’re parked and put it in either next Monday or Tuesday afternoon. 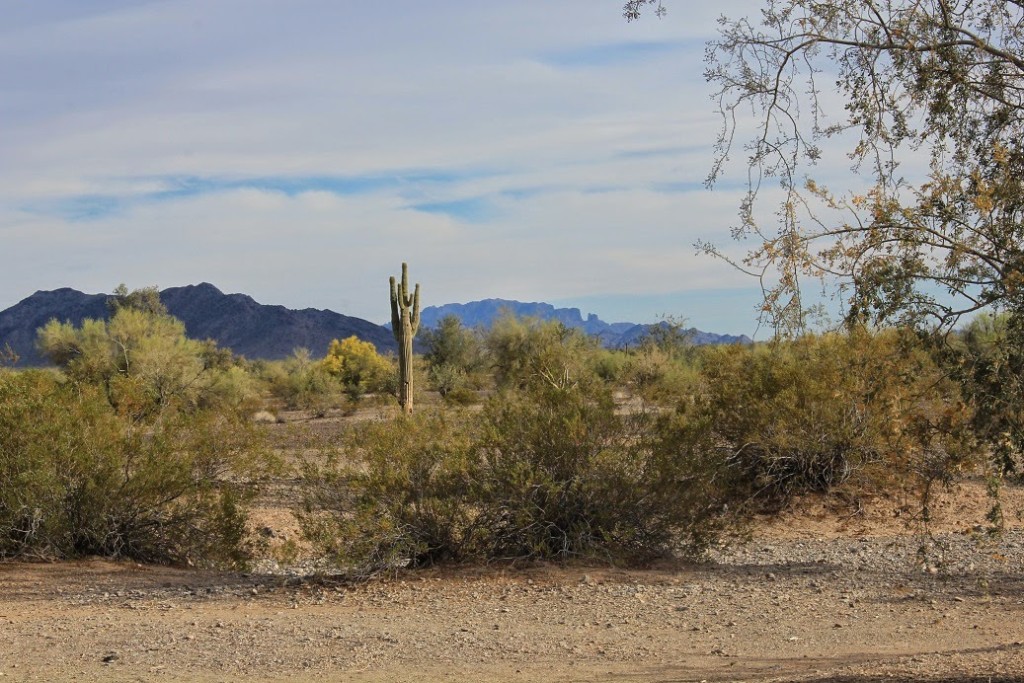 Desert heat is so much better than coastal heat, and a ton better than the deep south heat, but man it’s still hard when you’re trying to work in a trailer in 100F degrees. There was a nice breeze up until about 1pm but then things got more still. We had all the windows open and the awning down to shade us. It was so much better inside than out. 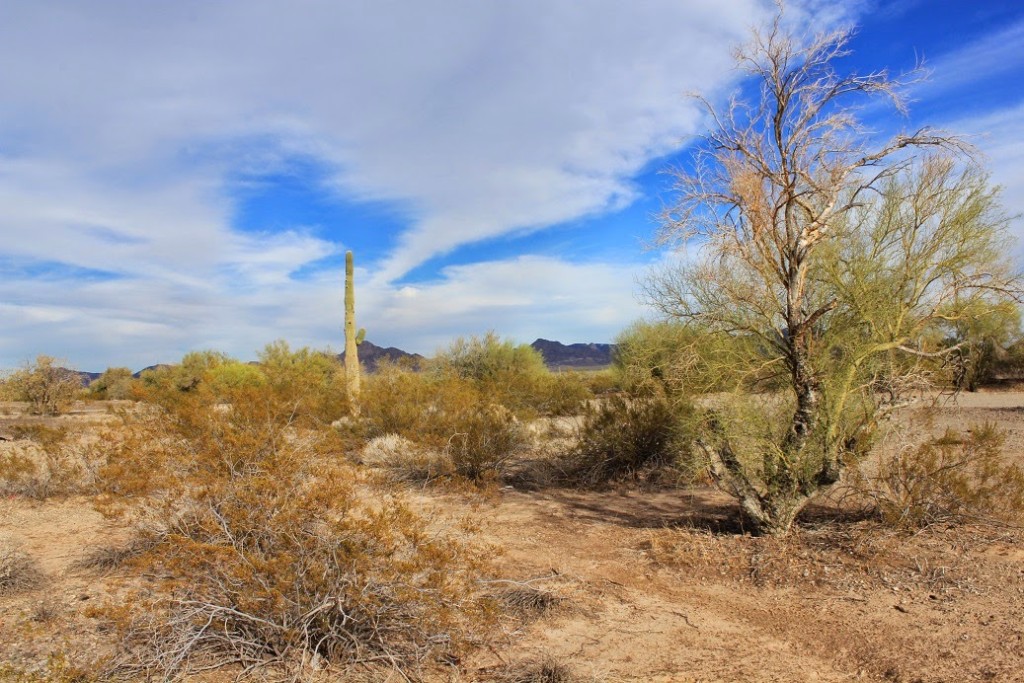 Toonie seemed to handle the heat worse than Teddy today. She was panting really loud and fast and she scared me a bit. I read online the best way to cool dogs down is to put them in cool water or put a cold compress on their groin. Toonie hates everything about cold. She’s a Chihuahua and always loves the heat and if it’s not hot, she’s wrapped up in a blanket like a little old lady. I was sure she’d be really angry if I put ice anywhere near her groin, but when I did, her eyes rolled back in pleasure as she laid down on her back in my arms. She was in heaven. 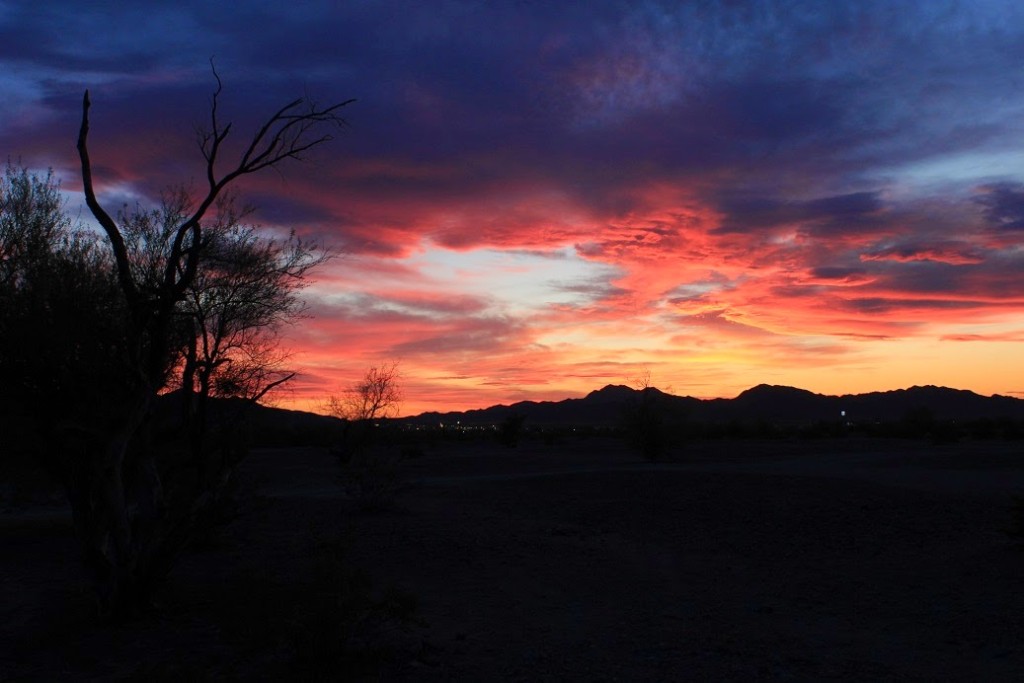 I can just imagine the picture we made, me with my watermelon margarita in one hand, and icepack in the other, icing first one dog’s genitals and then the other’s. Teddy was handling the heat much better, panting slowly and quietly and drinking lots of water, but he also enjoyed the cooling of his nether regions.

A cloud cover came in later in the day and it cooled things down a bit. Then once the sun set, the temperature started going down quickly and it’s sitting at 79F now. Perfect.

Are we too young for Mesa?