Plagues and Pleasures on the Salton Sea 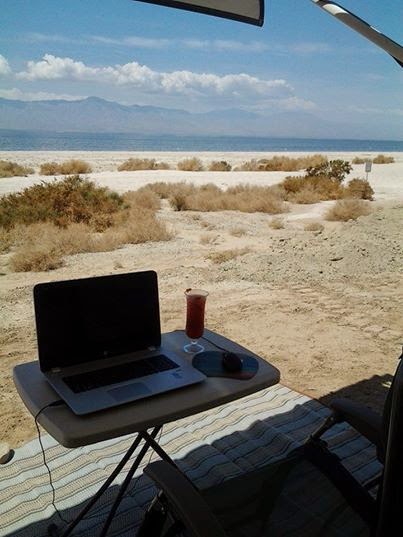 The first time I ever heard of the Salton Sea, was in the movie of the same name, starring Val Kilmer. He plays a speed freak addicted to meth, who is also an informant for two corrupt cops. The story seems all over the place and it’s hard to fit it together until finally you understand. It seemed a fitting style for the movie, as I can imagine this might be the way life is for a meth addict. Given all the meth addicts we’ve seen the last few days, the story definitely does fit in this area.

The next time I heard of the Salton Sea was in a documentary narrated by John Waters, my favorite cult film director. Plagues & Pleasures on the Salton Sea tells the story of the first 100 years of the sea, the accident that created it, the environmental catastrophe that ruined it, and the eccentrics who still live there.

Then of course, there was my favourite tv personality, Anthony Bourdain, cruising through the area, on one of his many travel/eating shows. He stopped to dine at the Ski Inn, the only bar and restaurant in a 20 mile area.

For many years, I’ve wanted to visit this area, to see how the reality matches with the stories. 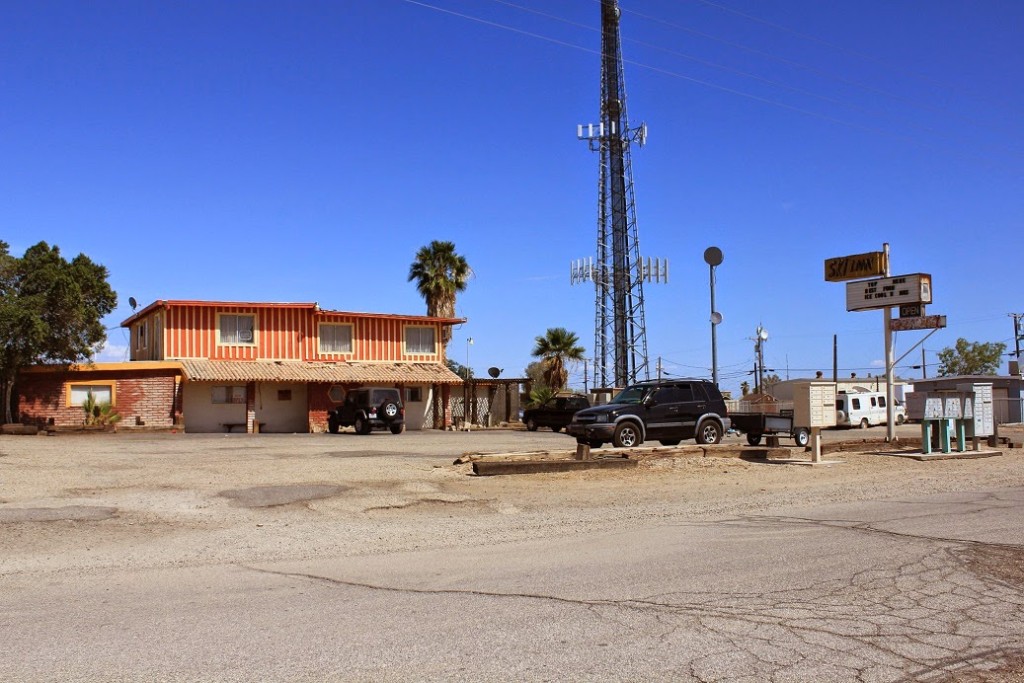 In 1900 this whole area was a big dry lake bed. Construction of irrigation canals began to redirect water from the Colorado River to the Salton Sink. The area became fertile and farmers began to plant crops. But then the river poured silt into the canals causing blockages which the engineers were unable to remove. The river swelled due to heavy rain and snow melting. It rose up and flooded the canal, ran over the dikes, and rivers, and came to settle in the Salton Sink. The Salton Sea was created. 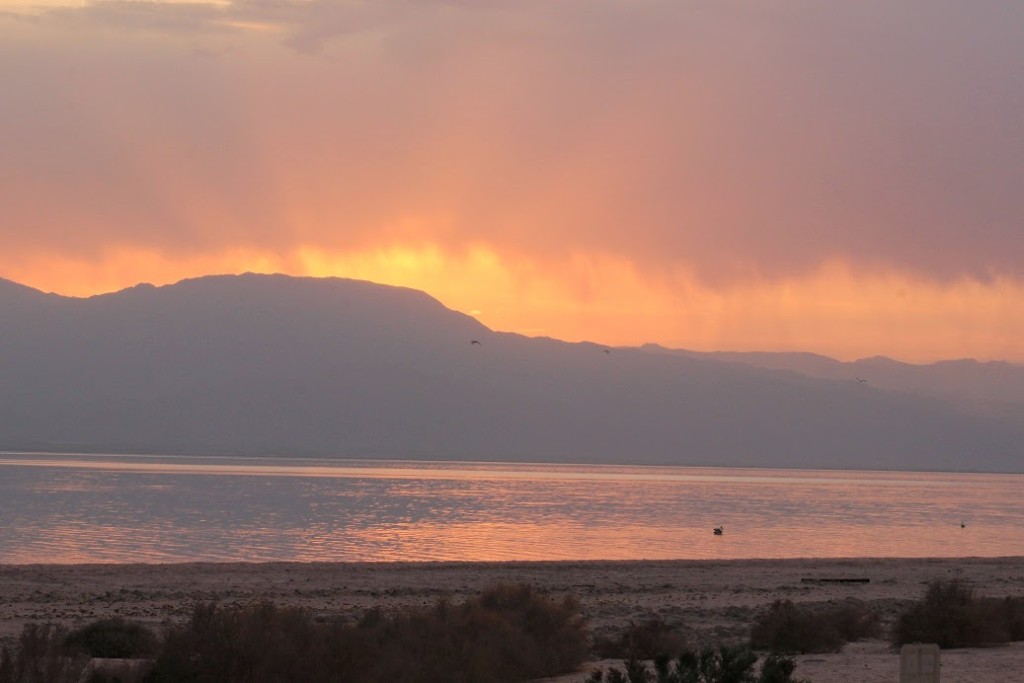 The sea lies below sea level, like Death Valley. Waters come in through the three rivers in the area, as well as agricultural runoff, drainage systems, and creeks. The salinity of the lake is greater than the Pacific Ocean but less than the Great Salt Lake in Utah. Mudpots and mud volcanoes are found on the eastern side of the Salton Sea and hot springs abound. 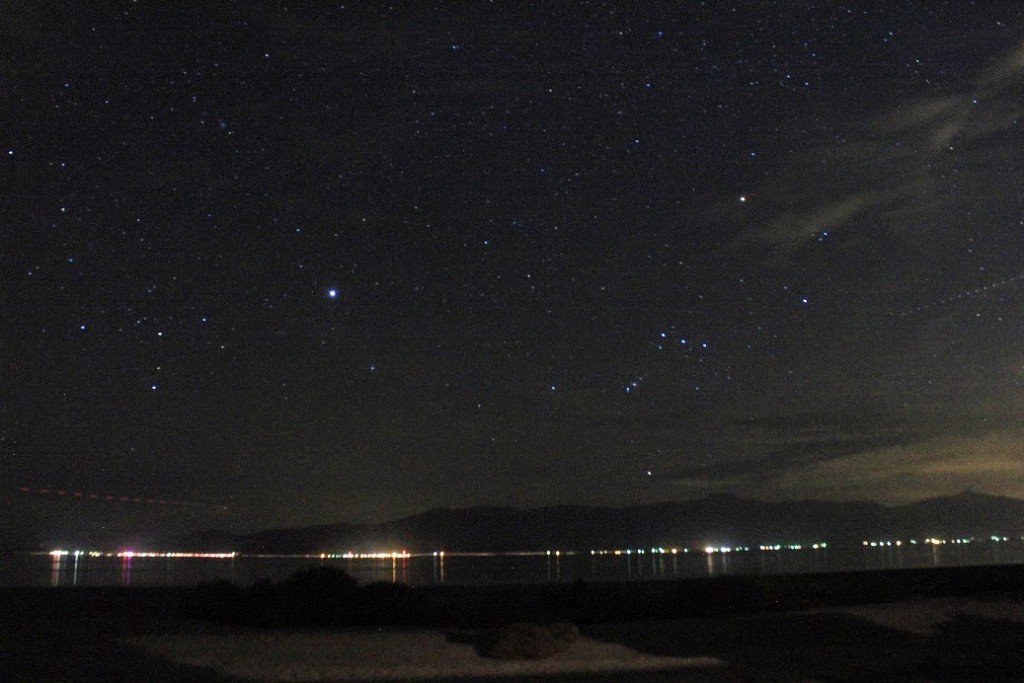 In 1950, the California Department of Fish and Game captured thousands of fish in the Gulf of California to be released into the Salton Sea. Due to all the fish, migratory birds began to use it as a stopover. Towns popped up along the shores, with marinas, yacht clubs, and golf courses and for a while, it became a resort area. People came up from LA and San Diego to fish, go boating, golf, and party around the water. 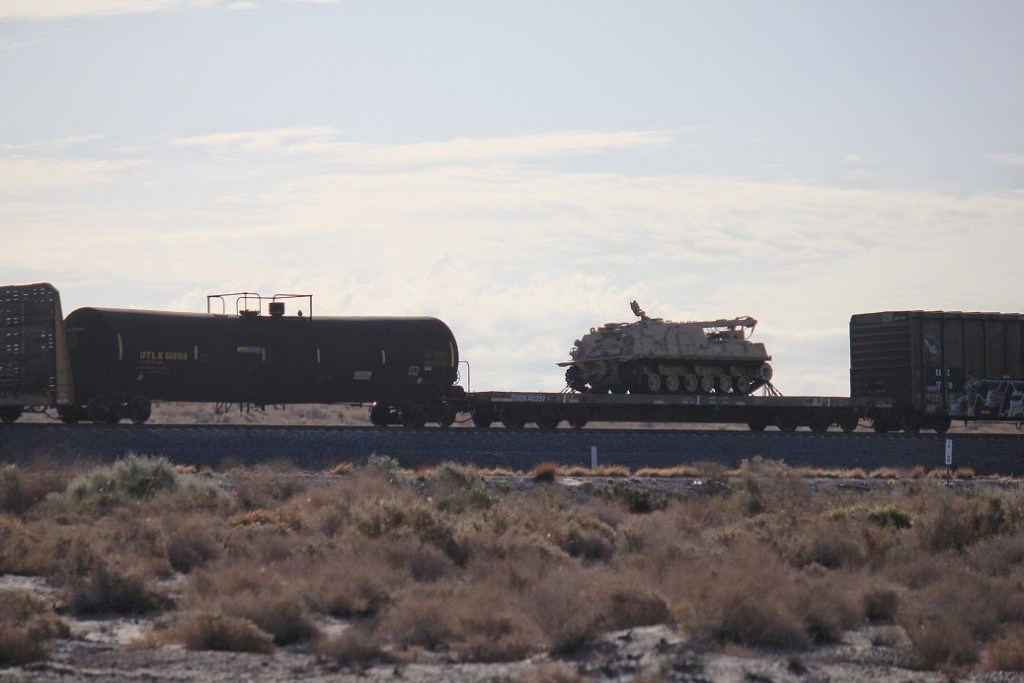 The Salton Sea has many entrances but no exit for the water, other than evaporation. The farms in the area were dumping irrigation water into it, and the salt and chemical levels have increased every year. The water became dirtier, algae thrived on the fertilizer, and the smell, along with the heat forced people to move away from the shore. 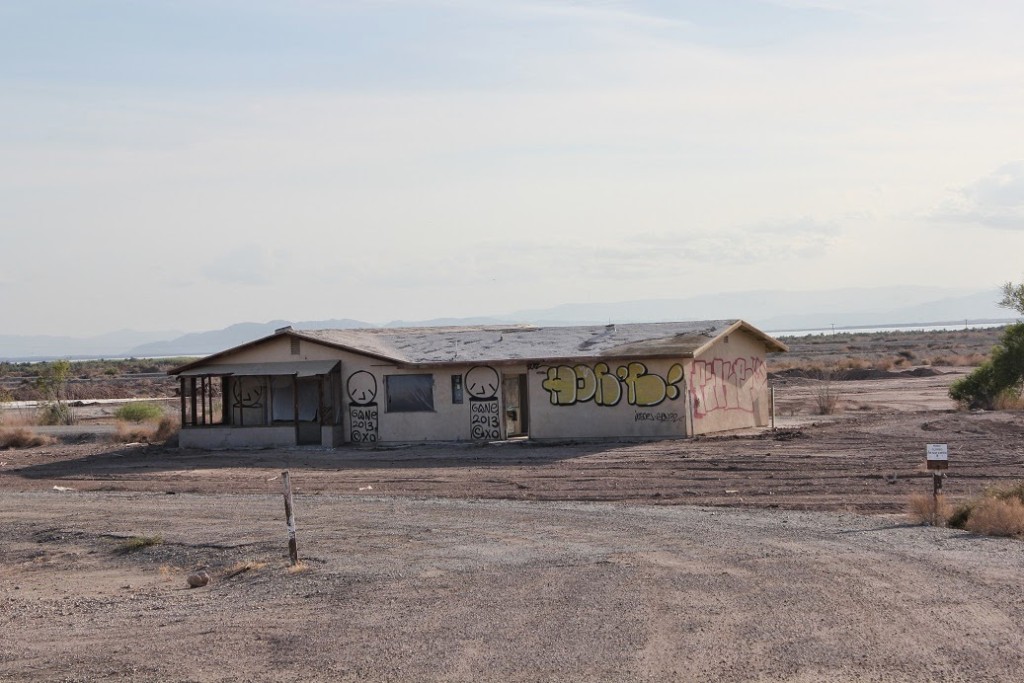 In 1976, and 1977 two tropical storms hit the area, and the sea levels rose, flooding out the marinas and yacht clubs. Neighbourhoods around the sea were flooded and abandoned. The local economy crashed and property values nosedived. 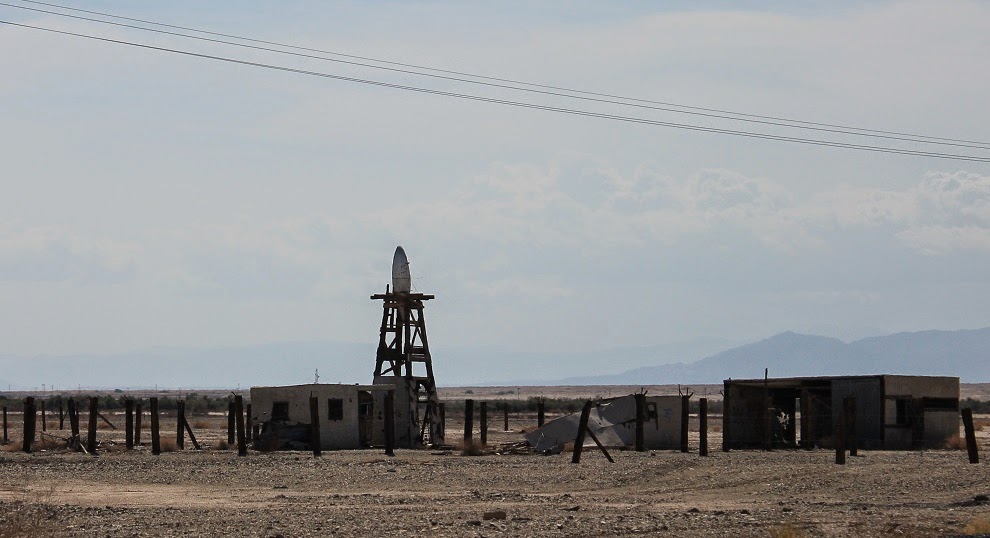 Then, in the 80’s, the large amounts of algae removed all the oxygen from the water, causing enormous numbers of fish to die off. The birds ate the rotting fish, and subsequently died of botulism. 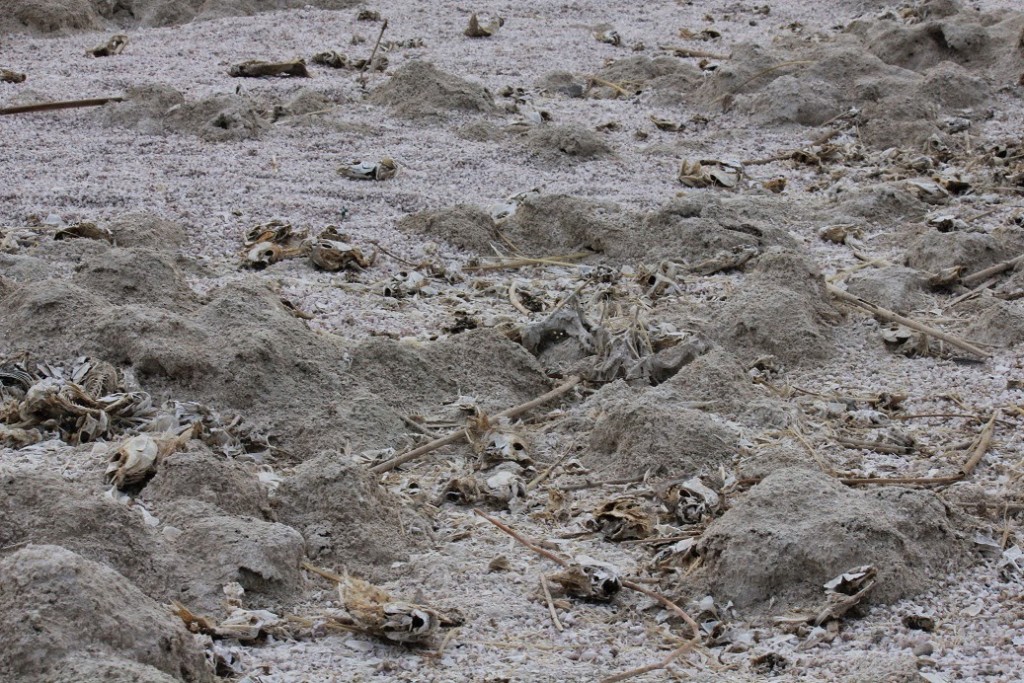 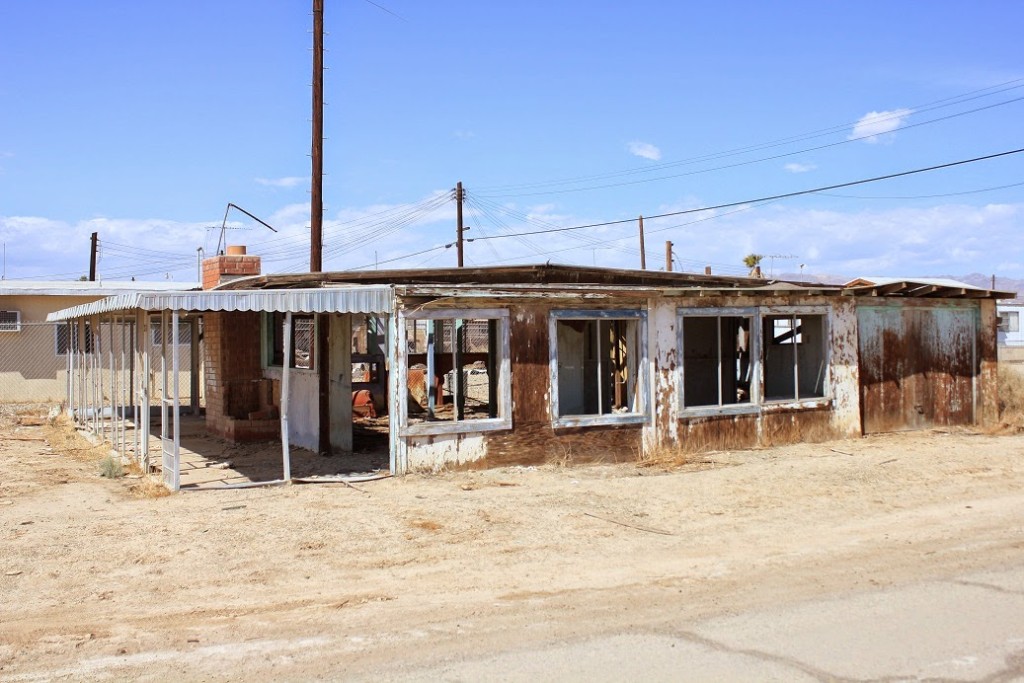 The entire area has the feel of a post-apocalyptic society. You can see the shells of what was a fun, thriving area, that is now dead and gone. If you don’t look too close, you can fool yourself into seeing it as it once was. You see the beach where there now lay skeletons, the water looks as clean as the ocean, and so beautiful with all the brown and white pelican flocks sailing around, but I wouldn’t want to swim in it. 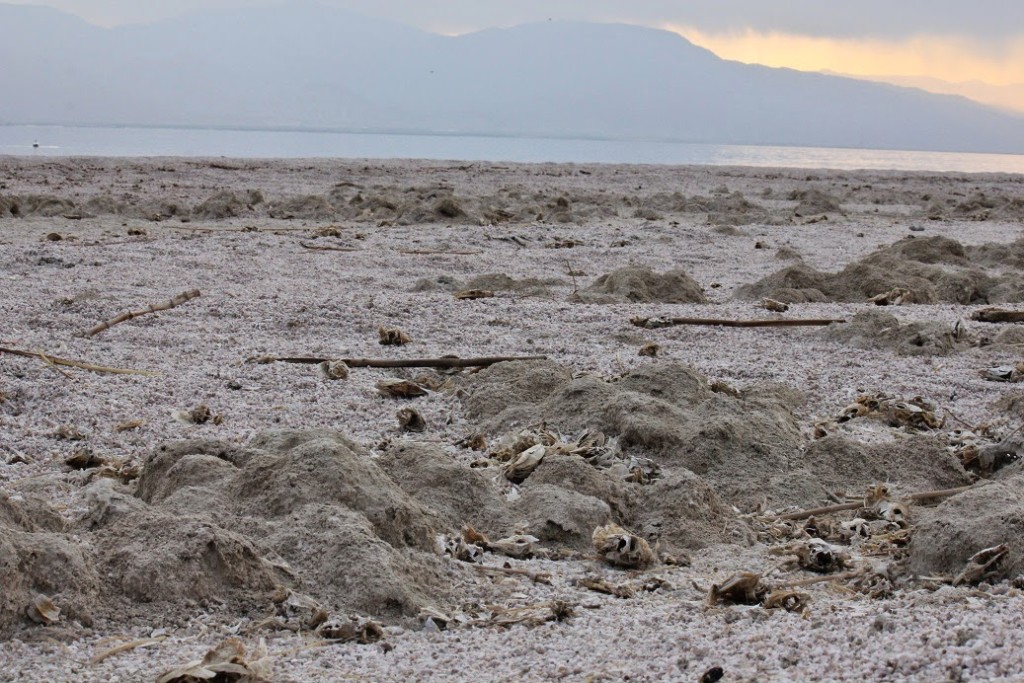 The breeze carries the smells of the rotting algae away, but when it’s calm and still, the humidity can be oppressive and the smell hard to take

Bombay Beach is hit or miss, one house among ten is well tended, half are abandoned in various stages of decay, and a few it’s hard to tell if someone is actually living in there. In Niland, our impression was of a down on their luck, drug addicted society. 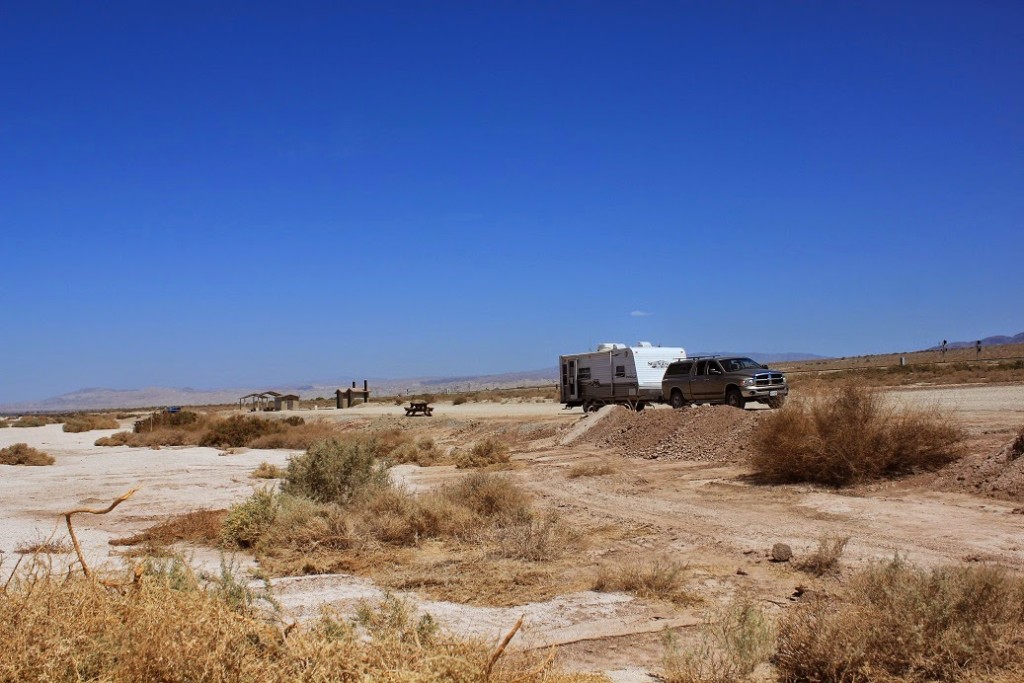 We enjoyed our stay along the shores of the sea at the Corvina Beach Campground. We met a young guy who was spending his nights there, commuting by car and bike each day to Coachella. This brought up memories of my daughter asking if we could go to the music concert this year and me telling her we wouldn’t be in the area during that time. Guess I was wrong. 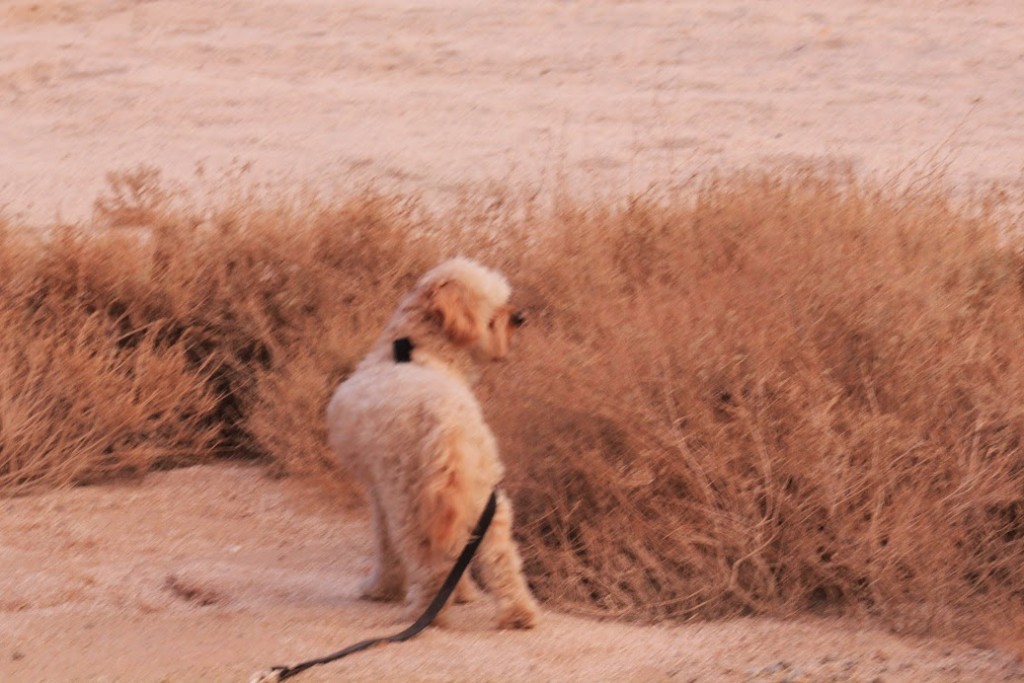 During our time there, we were often the only ones around, most people opting to go to the campground a little further north that included utilities. That was a big perk, as were the free showers, although, at first, I was put off by the lack of heat and smell of sulphur from the water. Nothing like a cold, sulphur shower to wake you up in the morning.

Could be worse, it could be Tonopah.

Overnight spot: Corvina Beach Campground
Price: $10.00
Includes: A parking spot, showers, washrooms
Dump/Water: We used the dump at the Love’s station in Coachella. It cost us $5 but it was pretty disgusting.
Garbage: We took our garbage with us and dumped it at gas stations.
Cell & Wifi: Verizon – 4 bars of 4G LTE

On the fringe, and off the grid — Slab City, CA