Sand in her eyes – a gift from the Algodones Dunes 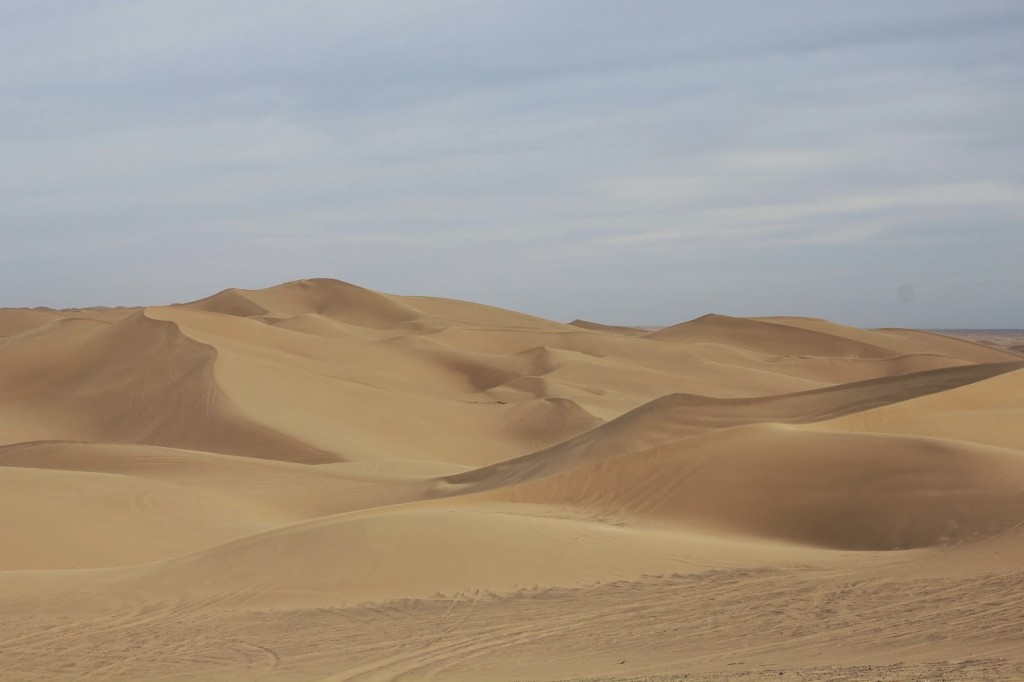 The first sign that we were getting close to the Mexican border was the border patrol station stopping and checking all traffic driving north. We were on our way south so we just zoomed on by, passing by a huge ugly behemoth of a mine, and then suddenly coming upon the most beautiful scene of the Algodones Dunes.

Also known as the Imperial Sand Dunes, they extend more than 40 miles and are about 5 miles wide. They’ve been formed by the windblown sand from the now dried up ancient .

Boy, did the wind blow. It blew the sand up and across the street, in front of our truck and was covering the left side of the road. I wondered how often they need to come through and plow it off the road. It was surreal driving throught it, like we were travelling through well … a desert. 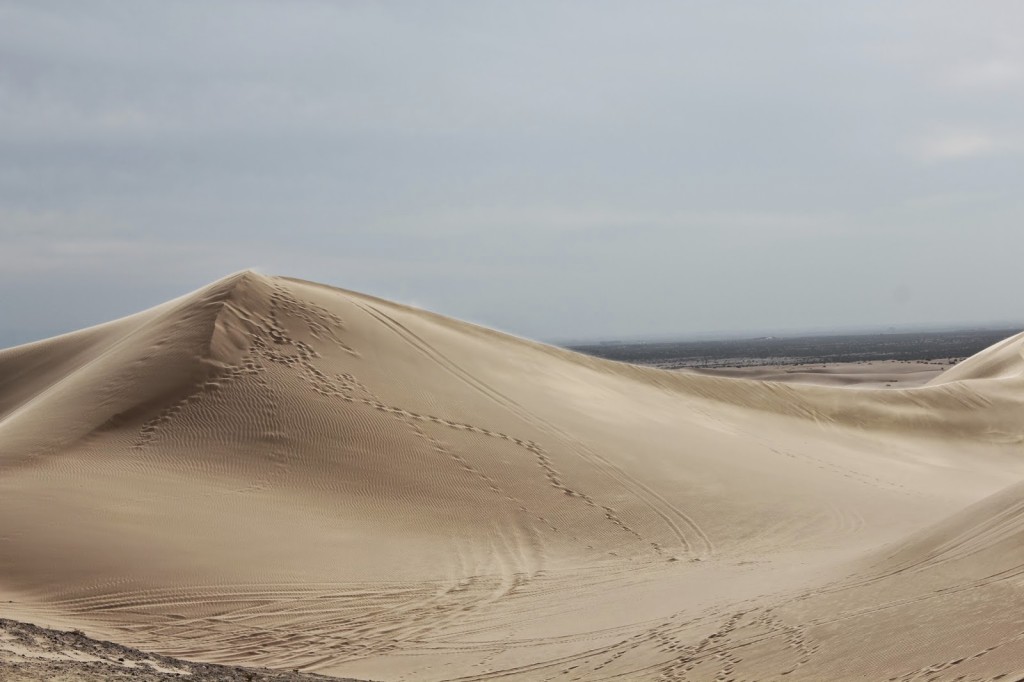 We were wishing we could stop and take pictures but there was no shoulder to speak of, so I started trying to take them out the side of the window, knowing they’d never be much good. Our wishes came true moments later when we came across a scenic viewpoint. We had to drive up a hill to the parking lot, where we found no parking signs on the north side, due to the ground eroding there.

I was surprised to see, on the south side, signs that said camping was allowed there for 14 days. It’s definitely not where I’d want to camp, with all that wind and sand, but I suppose it’s useful for the ATVers.

We got out of the car and into the wind, and it was cozy warm and strong, like standing out in front of a huge dryer vent. I couldn’t help but hold my arms out and lean into it, much like Kate Winslet did on the front of the Titanic. Teddy was enjoying it as much as I was, frolicking around in the wind and sand while Harold took photos, but poor Toonie was another story altogether. 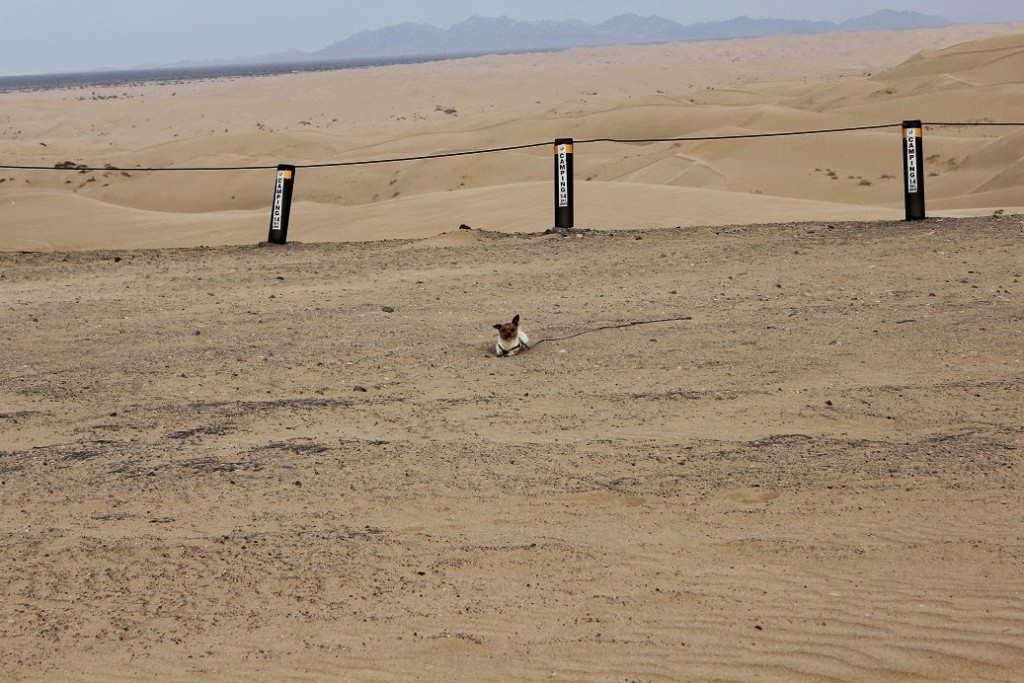 She is easily aggravated when I teasingly blow in her ears, and this was so much stronger. She kept hunkering down on the ground, and rolling her ears into the ground. She didn’t seem scared, and was rather excited by it all, but also very aggravated.

Making things worse for herself, she smushed her face down into the ground, getting sand in her eyes and up her nose. 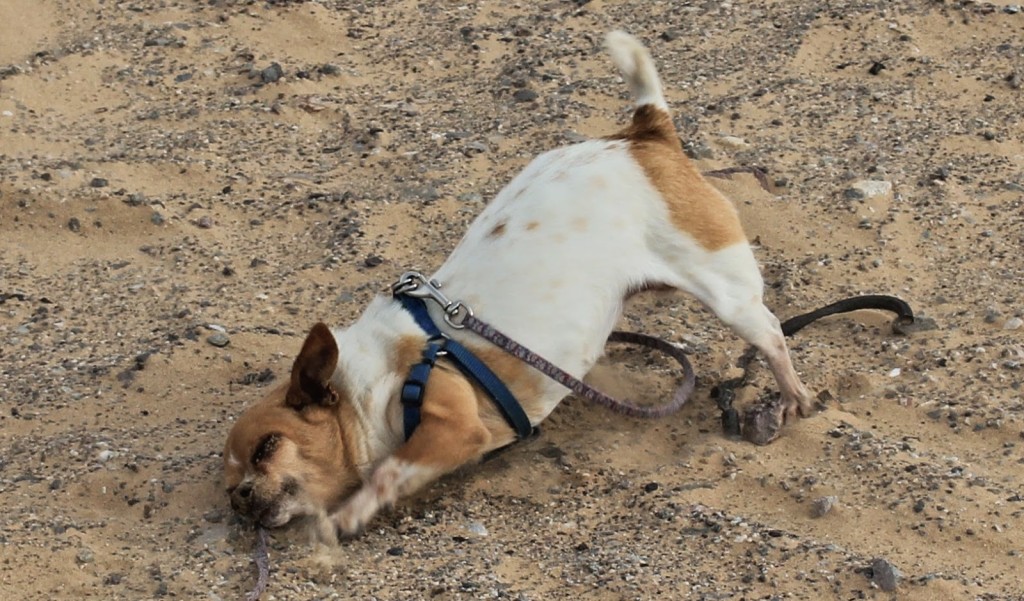 When I told her it was time to go back, she ran quicker than I’ve ever seen her run. Her eyes and nose were caked with the sand and she was relieved when I picked her up and carried her, pushing her entire head down into my neck for protection. Sometimes it’s really hard being a Chihuahua. 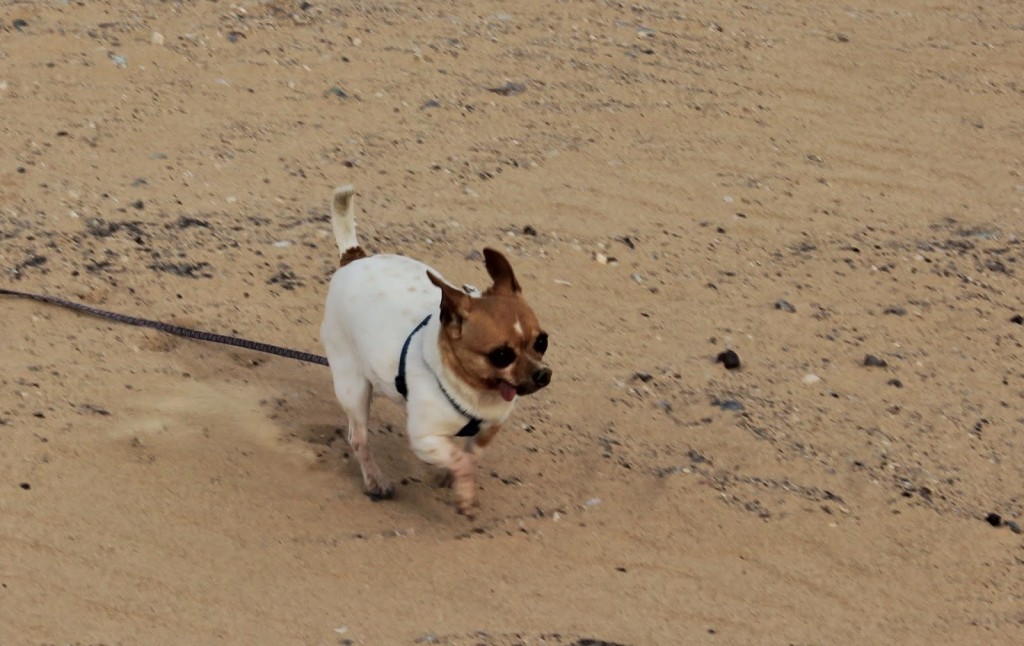 Adios Phoenix! So long and thanks for the ladder!

On the fringe, and off the grid — Slab City, CA