Right from the start, Conan O’Brien was the opposite of Chelsea Handler. We’d taken the Warner Brothers studio tour earlier and been told there were some standby tickets available for his show. We were a little gun shy, wondering if it was worth our time to be treated like cattle once again like we’d experienced days earlier at the Chelsea Lately show. In the end, we decided to give it a go. 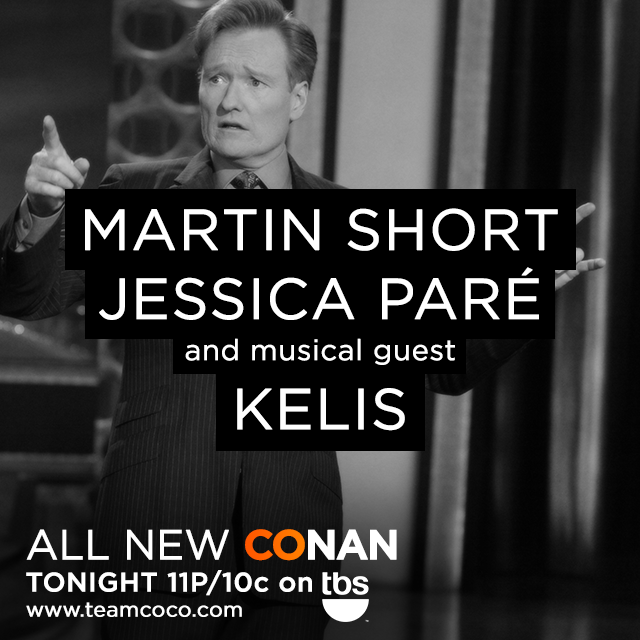 We drove over to Gate 8 where there was free underground parking available for us, and thankfully it had a high enough clearance to get our truck in. We checked into the waiting area, where they had a metal detector, and ID check, for all of us. Chelsea didn’t have that. We were given a number and told that reserved our place in line and we could leave if we wanted, but to be back in an hour.

Everyone, even the security was friendly and helpful. We hadn’t had time for lunch so we were looking at the vending machines, wondering what was the best of the worst to eat, and the security guard behind us told us there was a food truck right down the flight of stairs from us. The food was actually pretty good too. Back upstairs again, a staff member came around giving out popsicles. Someone else pointed out the water cooler at the side of the room.

When it was time to line up, they called us in sections of numbers and organized us numerically. There were a few special tags, but they were interspersed with the standbys, not put to the front. No bimbos were put to the front either. It was all done fairly, first come, first served. Because weather reports had proposed the temperature would be 97F, we were bused over to the studio, instead of having us walk the couple of blocks. That struck me as excessive, but one of the staff said it is standard operating procedure when the temperatures get that high.

With number 84, we were at the start of the last bus and when all were seated, there were only four seats empty in the audience.  I wondered if that was coincidental or if some people had been turned away when trying to get a number. Nobody had been left behind in the waiting area.  The studio was much bigger than Chelsea’s, with probably five times the number of seats.We were asked, not threatened, to turn off our phones before we got in the studio. I saw a guy in the next section with his phone on, and a staff member tapped him on the shoulder and asked him to turn it off. Chelsea’s staff would have booted his ass out of there.

The warm-up guy came out, explained the way the show works, got us all laughing and whooping it up, picked on a few audience members and then introduced the band. I don’t usually pay much attention to talk show bands. We just don’t see enough of them during the show. This band was amazing. They played a great show, in itself. They were on for about 15 minutes and the most impressive part was at the end when the trumpet player came through the audience strutting his stuff, ending by holding the same note 3-4 minutes, with no breath, while the band played. I kept expecting him to either end it, run out of breath, or pass out, but he even had enough breath to end on a flourish. Amazing!

After the band ended their show, Conan’s sidekick, Andy Richter was brought out. He and the warm-up/producer guy made a few jokes with each other and then it was time for the show. 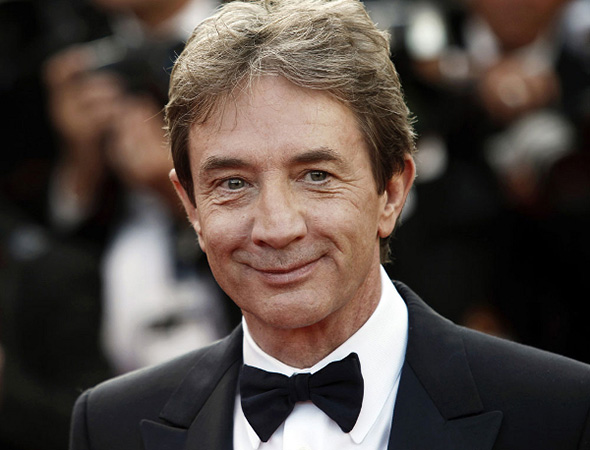 In Chelsea’s studio, we could barely hear them and really had to strain to hear anything. In Conan’s studio, the sound was great and we could easily hear everything. He came out, to do his monologue, spoke to the audience and even included us in part of his jokes, then went to commercial break. The monologue was about current events, and today it was about Toronto Mayor Rob Ford going to rehab. This was the first part of Canadian content day.

During the break, Conan was joking and talking with people while the set was changed and the band played, keeping the audience rared up. The dais on which his couch and desk are situated, rolls forward to the centre of the stage, and he and Andy take their seats, where they could be seen talking to each other. About what, I have no idea, their mics were off. I figured it was maybe about what was up next and what they needed to do, but it could have easily been about what they had for dinner last night. 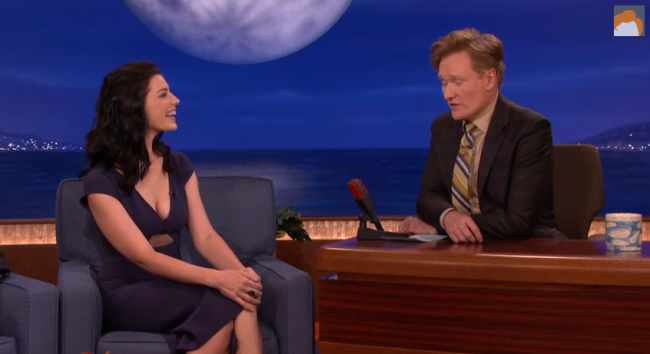 When the show came back, Conan set up the next bit by telling us about the “contest” they have going on with viewers who contact the show to report any mistakes Andy or Conan make. To continue with Canadian Content day, the guy shown on the video was from Vancouver Island. He was reporting that Conan had misnamed a melon in a previous segment. The guy was obviously wrong when we were showed the bit ourselves, but I think what got him on was his arrogance, telling Conan “He was busy and had to get back to doing something important – planting trees” obviously implying that Conan’s show was frivolous. We all groaned and jeered as he deserved and Conan had some great comebacks that had us all in tears.

The two guests of the show this day, were Martin Short, a comedian best known for his stints on SCTV and SNL, but also in movies, and Jessica Paré, who plays Don Draper’s second wife, Megan, on Mad Men. Both, strangely enough are also Canadian. Conan made a comment about it being “Canada Day” on the show and a number of us cheered, to which he retorted, “Oh sure, you’re all Canadians now! Where were you when we had the tree planter on?” 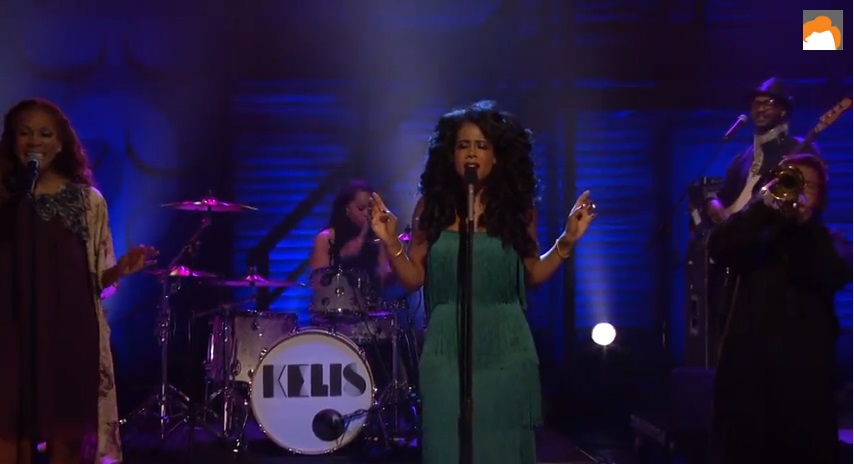 The last guest was a singer I didn’t know, but my daughter, Cairo, did. Looking up Kelis’ background, I should have heard of her before now. She has been nominated for two Grammys, won numerous other awards, and released 6 studio albums. She’s had 10 top ten singles in Britain. I really enjoyed her music and can now be counted as a fan.

Conan oozes with niceness and seems to really like people. He plays to the audience at times, and during commercial breaks, he talks to his guests. I remember seeing Chelsea Handler go off on Piers Morgan because during commercial breaks, he completely ignored her, and instead was on his phone. I had cheered her on, watching her from home, but now, seeing Conan in action made me realize even more how rude Chelsea had been to us, and how hypocritical.

While Kelis was performing, Conan was right up there, watching, clapping, and even singing along in bits. It made me like him all the more. After Kelis was finished he went up to thank her and end the show. Then as the show ended, he made sure to meet and talk to everyone in her band. I was amused to see them all taking selfies, especially with Jessica Pare. Of course, with Jessica Pare. Have you seen her?

So the show was over, the cameras off, all the guests gone behind the curtains, and what does Conan do? Does he give a snarky partial smile and wave and walk off? Nope, he starts singing to us, jumping up into the audience. The band joins in, and he gets going. The lyrics seem to be made up on the spot, something along the lines of “This is the end of the show song, the one they never hear on tv!” and went on for longer, but I can’t remember any more of the words. For all we know he might do the same thing every night, but we didn’t care. We all just loved it, and loved him.

The temperature had gone down so they let us walk back from the studio. Along the way there were staff members keeping us from veering off where we weren’t allowed, but when they had to remind people to go the right way, they were never rude. They smiled, and were very polite. At the final crosswalk, we had a conversation with one of the staff, who just oozed with excitement when talking about the show, and Conan in particular. It was all such a nice, happy, friendly experience, matching along with Conan’s attitude. It made me realize, just like Chelsea’s show, the attitude really does come from the top-down.