One of the more atypical things we did was to accompany my brother up to the Vitello’s Restaurant in Studio City. Vitello’s is a great looking old style Italian Jazz and Supper Club. Since the 60’s they’ve been hosting jazz, cabaret, and world music shows for both local acts and musicians traveling through town. 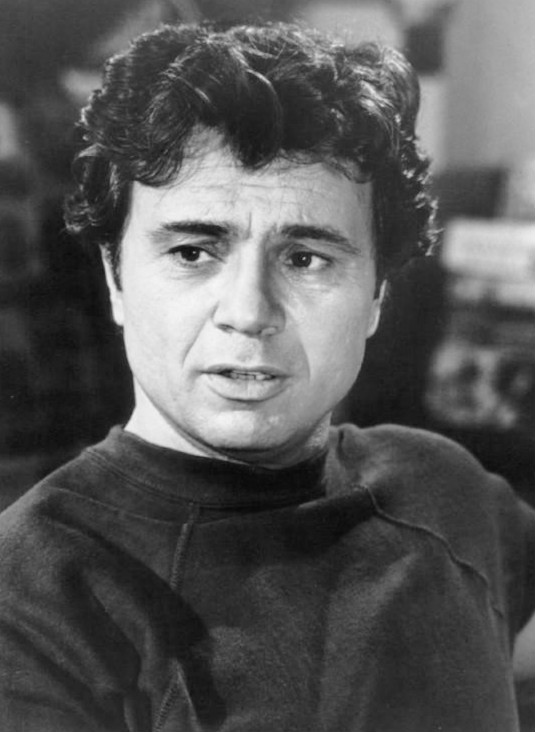 This is the restaurant Robert Blake (remember Baretta and his cockatoo Fred?) took his wife, Bonnie Lee Bakley for dinner, on May 4, 2001, before she was shot in her car around the corner. Blake said he’d gone back to the restaurant to get the gun he’d left there (how does someone forget their gun in a restaurant?) and when he came back, he found her dead from two shots through an open window. The gun he had gone back for was shown not to be the murder weapon – the murder weapon was found in a dumpster a few yards from the car.

It wasn’t until 3.5 years later that Blake was charged with Bonnie’s murder, and though there were witnesses who swore he’d tried to pay them to murder her, he was eventually found not guilty. On the night of his acquittal, several fans celebrated at Blake’s favourite place – where else but Vitello’s?

Okay, so we weren’t here as some sort of macabre murder tour – though we’re not above that sort of thing – we were here because every Wednesday afternoon, my brother’s favorite Internet radio station, MartiniInTheMorning.com hosts a lunch where listener’s can come, watch them tape the show and meet the hosts.

My brother, Andrew, has been listening to the show for many years and is well known to them. When we came in, he was recognized and they were genuinely excited to finally meet him. We had a wonderful lunch of old style pizza, pasta and wine, while Andrew enjoyed martinis with the hosts. 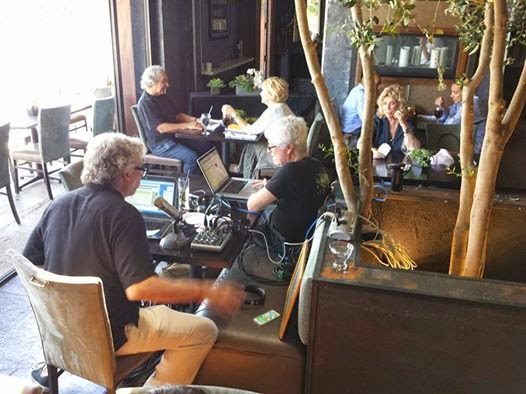 The restaurant was quite full for a Wednesday afternoon. There was a couple seated at the next table to us. The young, dark haired beauty spoke on her phone a lot, while the older man in sunglasses sat beside her, with an air of self-importance. Every so often she’d stroke his ego, tell him how great he was, then go back to selling him on another phone call. It sounded to me like she was his promoter or agent or something like that. I couldn’t help but wonder who he was. 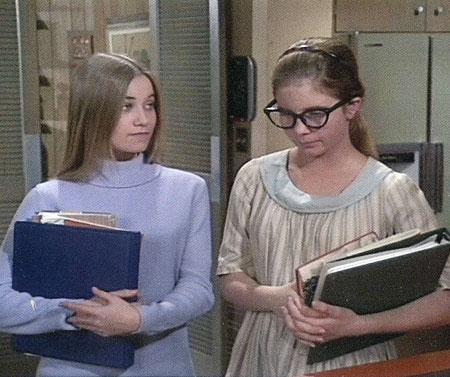 AFTER SCHOOL APPROACH – – Marcia Brady, played by Maureen McCormick, helps her friend Molly Webber, played by Debi Storm (right) in this 1972 episode of “The Brady Bunch,” to change her entire look to become more popular at school. (Image courtesy of Paramount and ABC)

A woman came up to talk to the hosts of the show, and we were told she had been a child actress. We wondered if we’d seen her in anything, and it turns out we have. Debi Storm was in an episode of the Brady Bunch, a particularly memorable one, if you were a fan. She played Molly Webber, a plain girl who Marcia feels sorry for, so she gives her a makeover, and unleashes a monster who is out to beat her to be hostess for senior banquet night. As soon as I heard the character’s name I recognized it. It’s strange how such a memory can just sit there in your head for so many years, yet just the other day I couldn’t remember my dog’s name.

Anaheim is a good place to stay if your main focus is the Disney parks and Knotts Berry Farm, but everything else is an hour or more away. It’s pretty much the only place to park your RV in the city area, unless you go out somewhere like Huntington Beach. It’s fun to watch the fireworks from your site each weekend night, and the groups that come in for the weekends like to spend time outside, in more of a camping or vacation mode than we usually come across. I think though, this will probably be our last foray to the Disneyland area and parks until we have grandchildren to spoil  take there. We fit in pretty much every tourist thing you can do, tours, parks, and shows, and we’ll not do it again for another 10 years or so.

With my brother gone back home and then my daughter leaving, I fell into a bit of a depression. Even my parents, who had been on the road in their RV during the same time (though at different places) were now home, and I was feeling like I just wanted to go home as well. I knew though, once we left Los Angeles, and moved on to new places, the sadness would leave me again, and I’d once again enjoy the travel.

So off to Santa Barbara we go!