There are three state beach campgrounds by Santa Barbara. Carpinteria is 12 miles south of Santa Barbara El Capitan is 17 miles west and Refugio is 20 miles west. We chose Refugio this time, since my parents had just been there the month before and had enjoyed it. 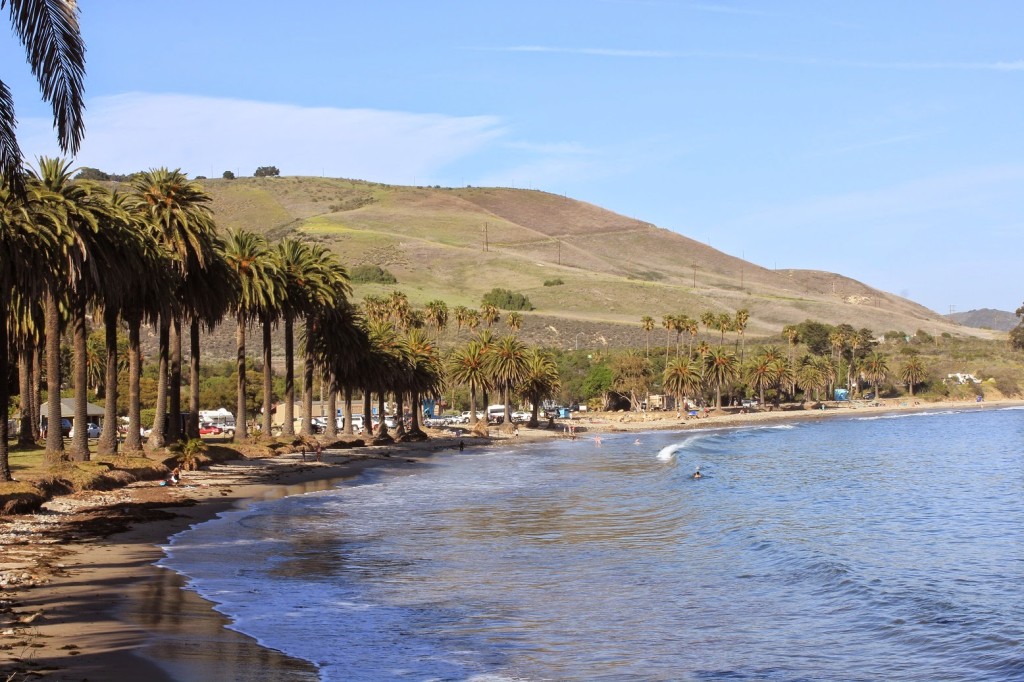 When reserving the camp site, I had made the assumption that it was right on the water. The map had made it appear so, but it turns out there is a lane of public beach parking along the water. Still, it was a beautiful place to be, especially once all the day people went home and left us alone there. Weekends are very busy at the beach with lots of locals, but weekdays are nice and quiet. I expect once summer hits it will be busy every day of the week.

We went for a hike along the water and were rewarded by the sight of a grey whale. It was so exciting to see it’s nose coming out and diving back down again. We weren’t sure if it was feeding or travelling. It looked to be doing both. 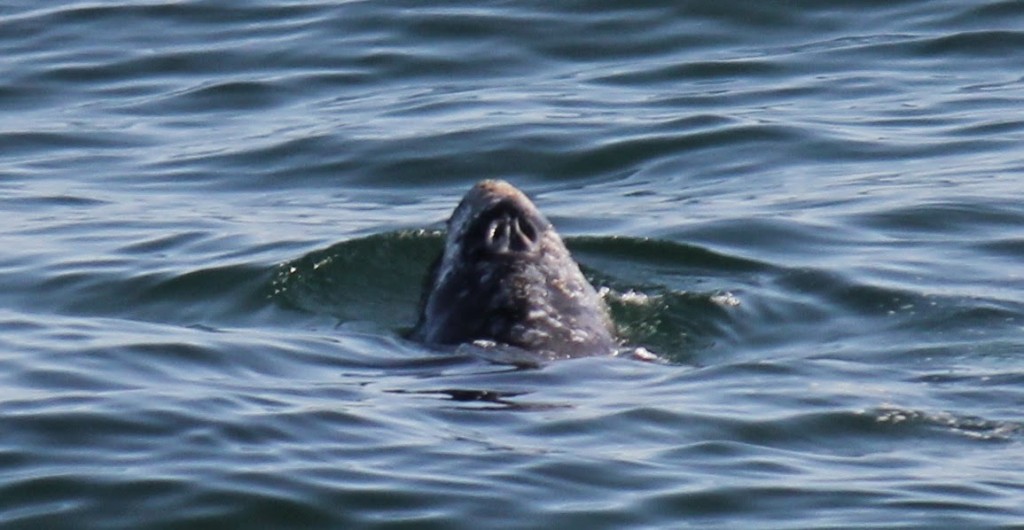 Grey whale sighting along the beach.

On Monday we drove into Santa Barbara to see the sights. We hit up the tourist centre first, where we were given a city map and directed to the different places to see. The harbour has three beaches, a wharf, restaurants, and a Maritime Museum. Since we’d had to work all day, and it was now late afternoon, we didn’t have enough time to do both the town and the waterfront so we chose to go up a few blocks into town instead. 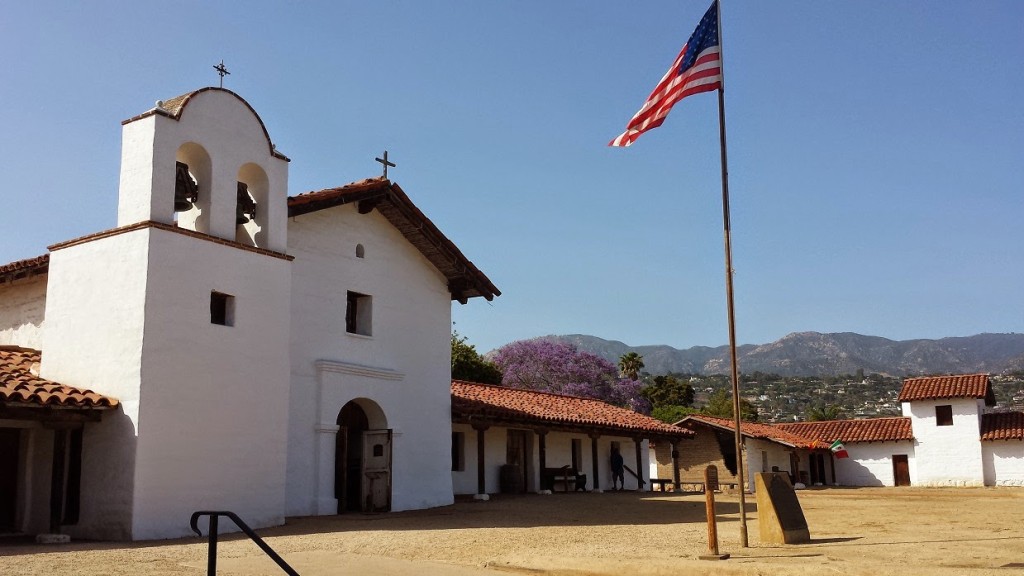 The downtown is a beautiful area full of Spanish-Moorish architecture, white stucco walls and red-tile roofs. Free parking is plentiful around the city, and even though our truck is too tall to fit into the parking structures, we easily found a spot along the road right in the midst of the old city area. 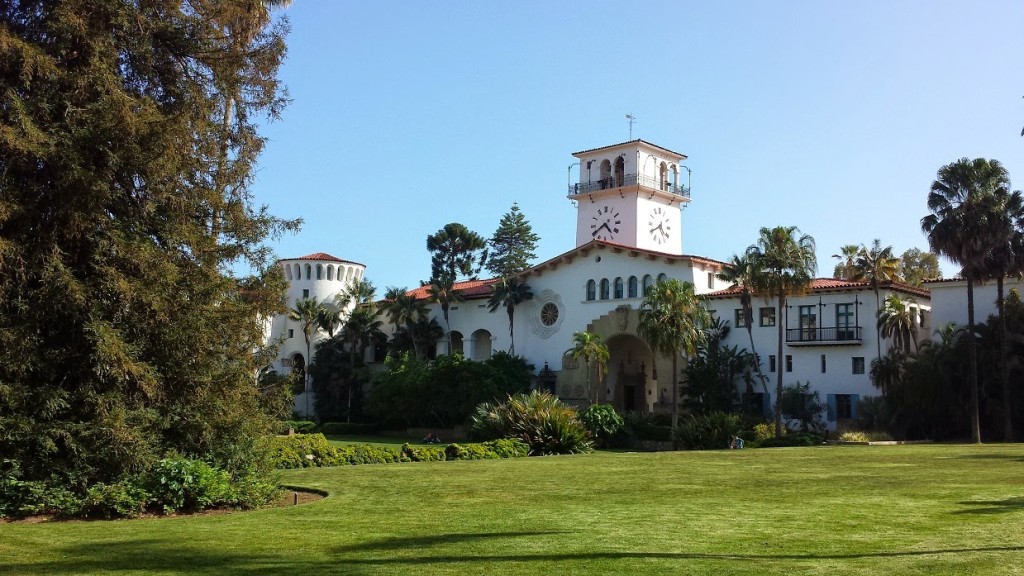 We got out and walked around the gorgeous downtown, taking in the city hall, Presidio and other old buildings. 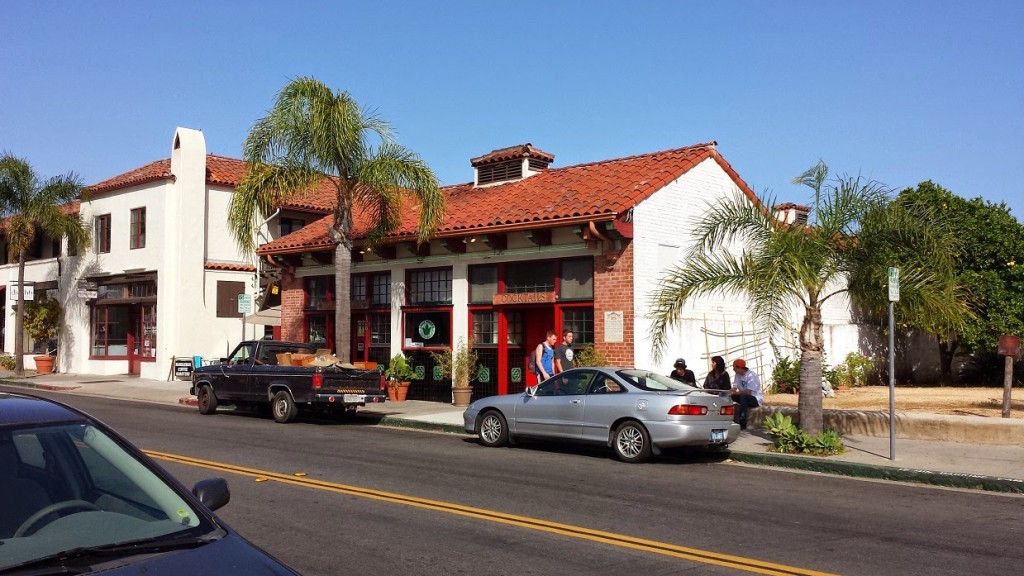 There are quite a few homeless people here. As we were walking past the library we came upon an old man who looked very rough sitting upon an adobe bench. A security guard stood just feet from him, staring at him – or actually – glaring at him, as if daring him. I got the feeling the guard had just spoken to him about pan-handling and was watching to make sure he didn’t approach us. I couldn’t be sure, but I watched, trying to decipher their body language. I felt protective towards the old guy and had he asked, I’d have given him a few dollars, but he never asked. 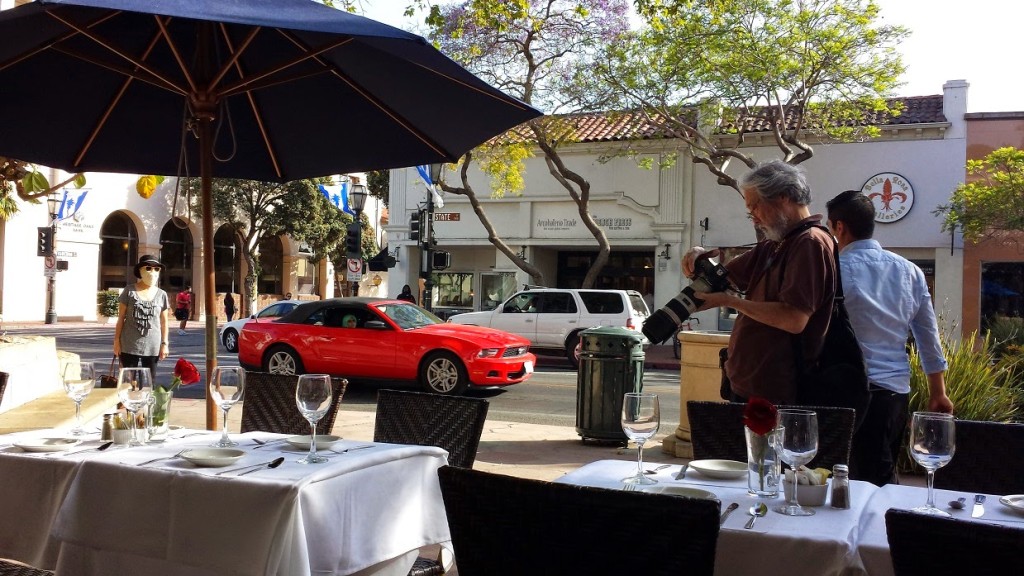 Around the corner we came upon three homeless people sitting on another bench. A woman stood in front of them passing out meals. The larger blonde spoke up, motioning to her friend “She’s Vegan, she won’t eat meat!” And it struck me as funny and touching at the same time. This little woman has nothing. She can’t feed herself. You’d think she’d be happy with anything, but she’d rather go hungry than eat meat. That’s conviction. The woman handing out the food stuck her hand in another bag and brought out a Vegan meal. Only in California, I thought. 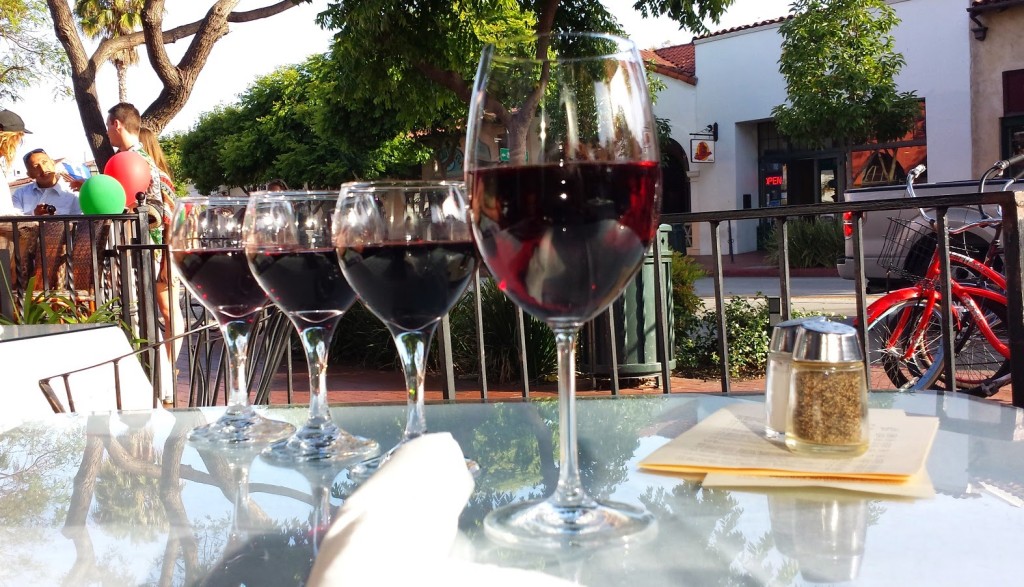 Halfway down the next block we stopped for a happy hour glass of wine and free appetizer out on the sidewalk while we watched people pass us by. We debated having dinner there, but then decided to look for other places with happy hour deals. 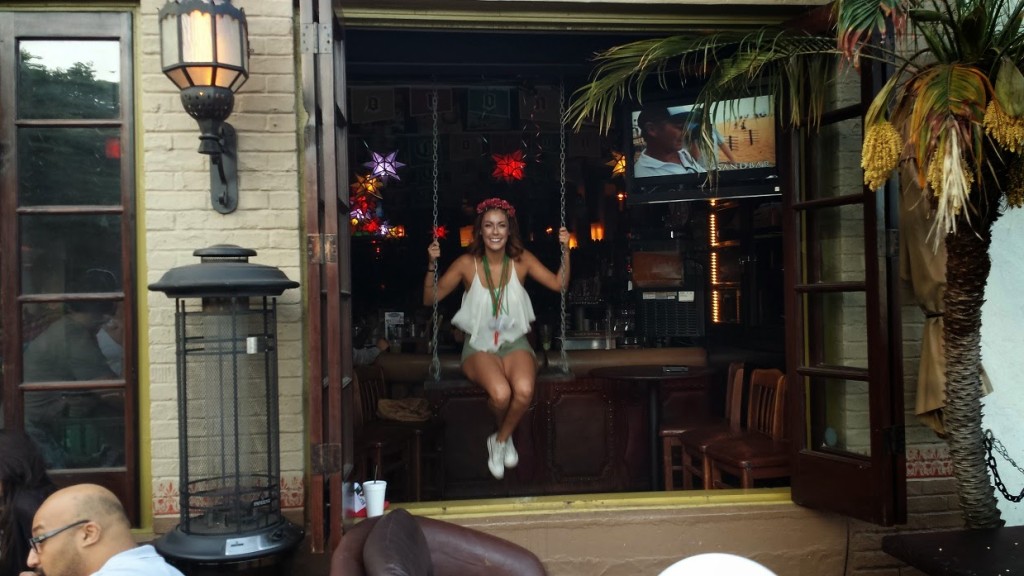 She swings for a living.

The street here is lined with stores, restaurants and bars. We belatedly realized it was Cinco de Mayo when we noticed all the bars with revellers and décor for the day.

We found another side-walk bistro where we ordered wine and some exceptional Panini, and settled in to watch the people wander by. The Mexican bar beside us was full of partiers doing tequila shots, and the bar across the road brimmed with partiers doing the same. 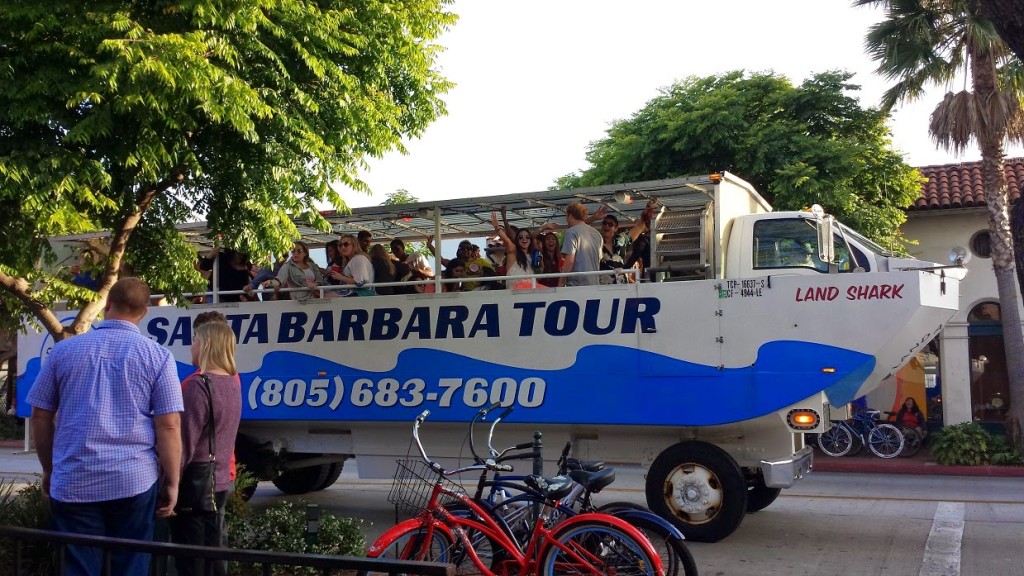 A big amphibian vehicle full of screaming, drinking masses came by and stopped in front of us. “Woo!” they yelled, in the language of young drunks. “Wooooo!” The bar patrons yelled back. “Wooooooooooo!” They screamed back, not to be outdone. Then they were off again, down the road. 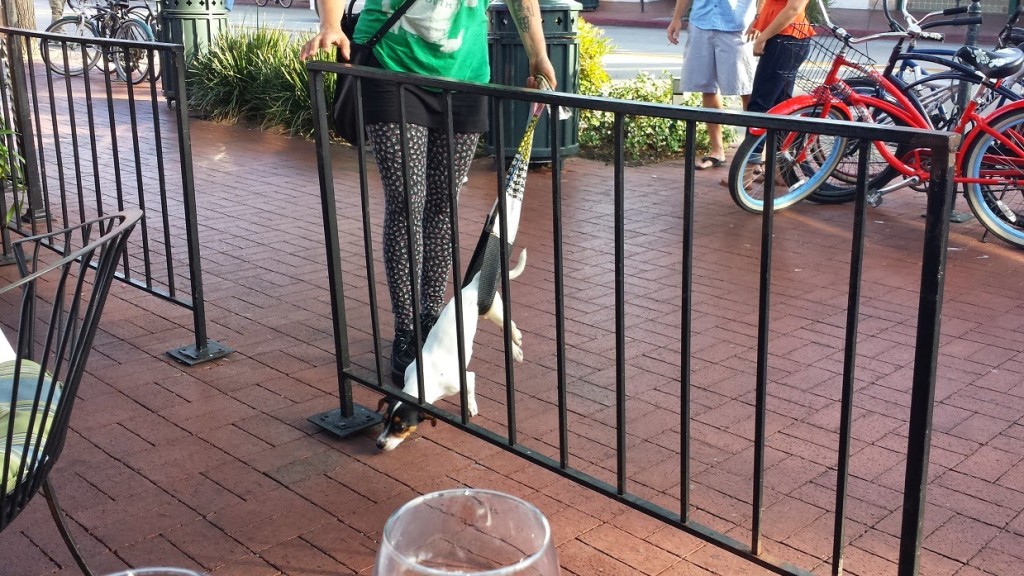 Deformed back legs don’t slow him down.

We were wishing we’d brought the dogs along with us, especially seeing all the other people with dogs there. But Teddy just isn’t ready for that sort of thing yet. He’s a big scaredy cat, and he barks at everything when he’s afraid, especially dogs – and birds – some people too. Not all dogs are good sidewalk cafe dogs and he may never become one. That’s okay, we love him just the way he is. Since we’d left them, we needed to get back soon. We drove up the road a bit to visit the Mission, then headed back up the coast. We’ll be back.