Fernie, BC could have been our t-shirt town 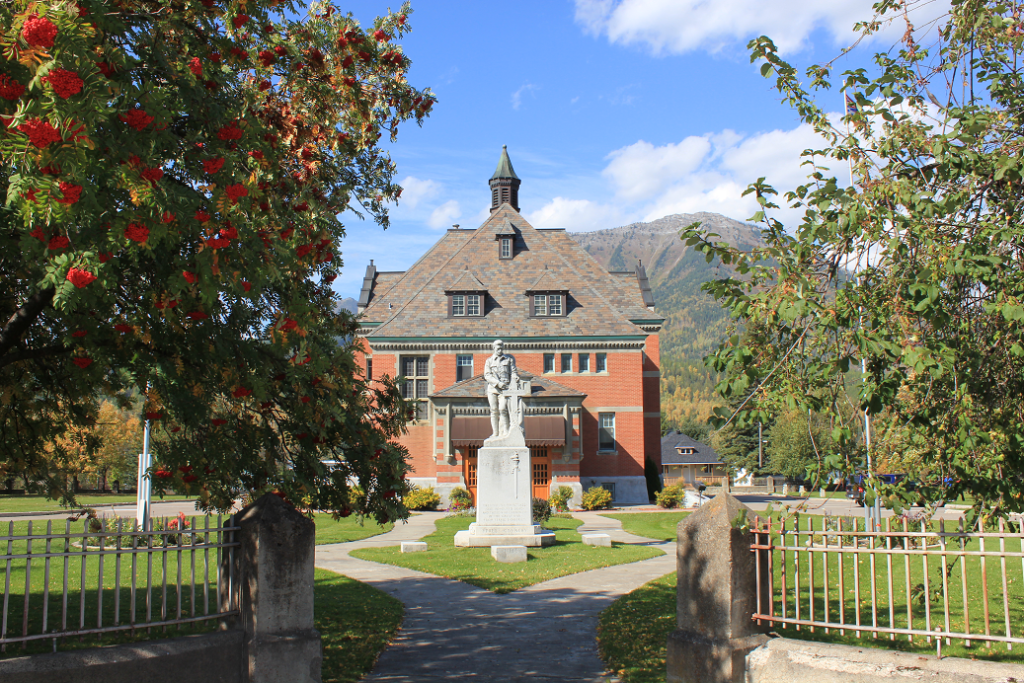 This statue is the original Fernie who the town was named after
not to be confused with the current day Fernie who is my stepfather.

My stepfather Fernie doesn’t come from Fernie, BC. I expect it would have been very strange to have the same name as his hometown, so it’s probably better this isn’t where he grew up, even if it might be a nice twist for my blog.

The attraction for us, to the town, is definitely in the name. It was a little out of our way, but we knew it was a ski and outdoor resort, like all the other towns in the Kootenays have become. Plus there is a Craft Brewery in town, Fernie Brewing. Most of all though, we just wanted a “Fernie” t-shirt. 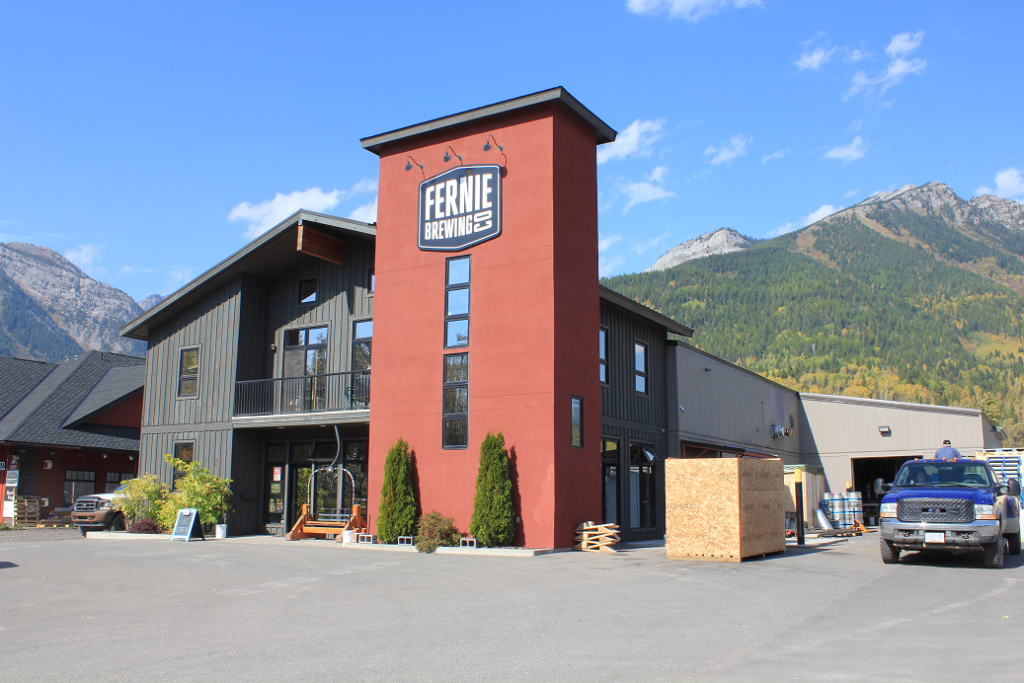 Fernie loves beer, so this could have been his brewery, but isn’t.

The ski resort allows free overnight RV parking, but they are closed for the season. So is the Provincial campground just on the outskirts of town. Our only choice was a small RV lot beside a motel in town.

A good location, but very cramped, with room for about ten RVs max, not to mention our next door neighbours with the three ferocious Golden Retrievers. No, not ferocious to us. They loved Harold and I. They just don’t like other dogs. Poor slighted Toonie and Teddy. 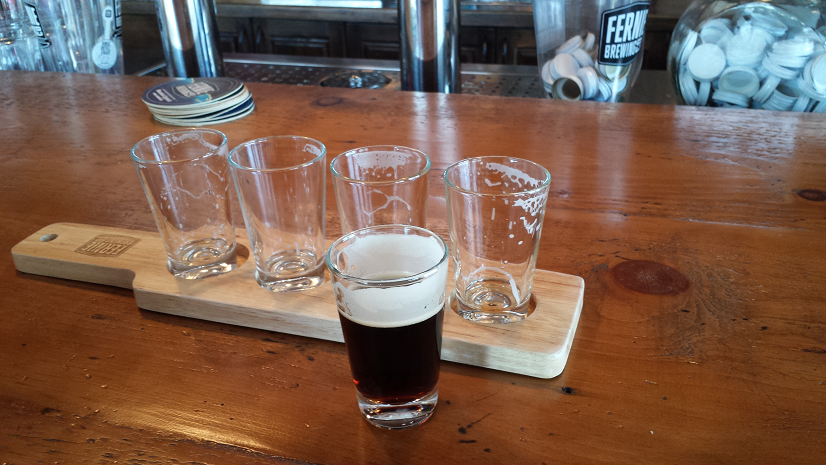 This may have been more interesting if I’d shot the ‘before’ picture instead.

It was another beautiful, warm Fall day. Fall has become our favourite season out here in the west, always warm and sunny, with very little rain. Travel is easy, with all the kids back in school, and it’s rare to find a line-up anywhere, except when you come across the road work crews.

Our first stop was Fernie Brewing, where we chose to share a tasting of five different brews, a pale ale, a red ale, a brown ale, a pumpkin brown and a maple porter. I was surprised to find out that I prefer brown ales to the pale ales I have been drinking. We purchased a six pack of the pumpkin brown and the regular brown. 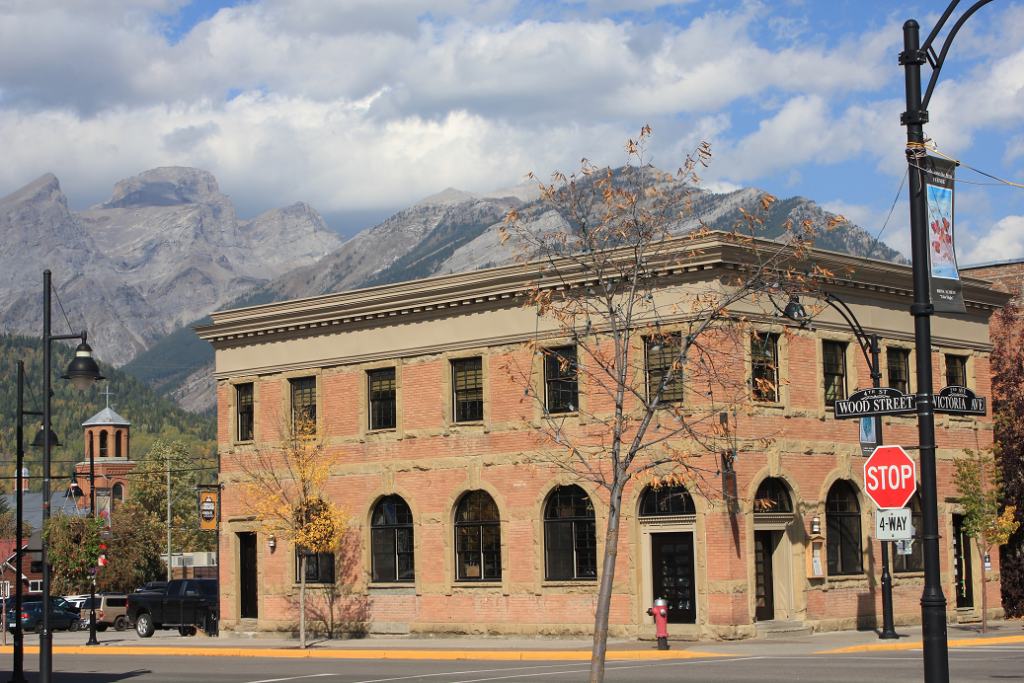 These mountains are all real. No special effects used.

We went for a drive up to the ski resort, but as we’d heard, it was all closed up, even the hiking trails. This is the downside of visiting places in the off season, but we’re okay with that. It would have been nice if we could have got a t-shirt there though.

The downtown is a few blocks from the highway strip malls. We drove through it first of all, but it was so dead, we weren’t going to get out. But then I wanted a picture so we did get out. Then I looked closer at the street and thought, “Well it’s such a nice day and we do need a t-shirt – why not here?” Then a few steps in, we found it more quaint than we’d originally thought. It was really deserving of a walk around.

Have you seen the 2010 movie called Hot Tub Time Machine? The downtown scenes were filmed right here in Fernie’s downtown. The movie had a silly premise, but ended up being very entertaining, kind of like Fernie, the town, was to us. Well, we didn’t find Fernie the town silly. We underestimated it. Once we looked more closely, we found so much more than we’d expected. Actually, I could make another anology about how Fernie, the stepfather is … or maybe not. I’ll just say – if you could see him running around the house with his dog, hooting and hollering, you’d understand. 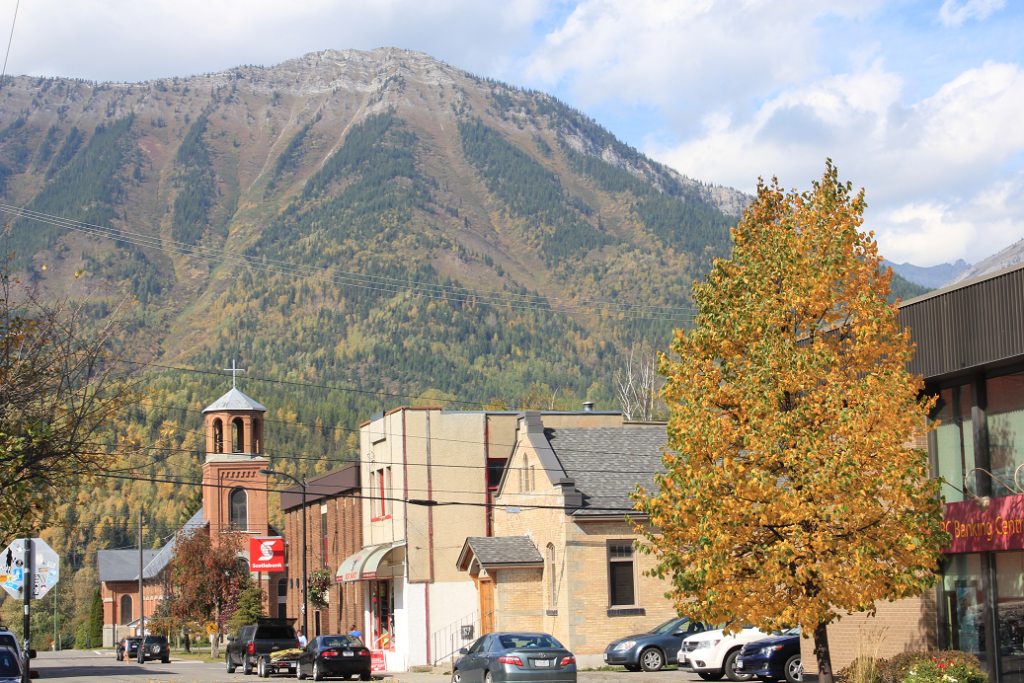 Fernie is the only municipality in Canada
fully encircled by The Rocky Mountains.

The stores are all catering to hipsters and outdoor enthusiasts. We’re too old to be the former, but we’re definitely the latter. We stopped to try on some hiking boots on a table out front. “CLEARANCE SALE!” proclaimed the big sign hanging on the wall. Unfortunately, the only hiking shoes Harold liked the feel of were ankle boots he didn’t need. The ones he did need, hiking shoes – there were none that he liked the feel of. 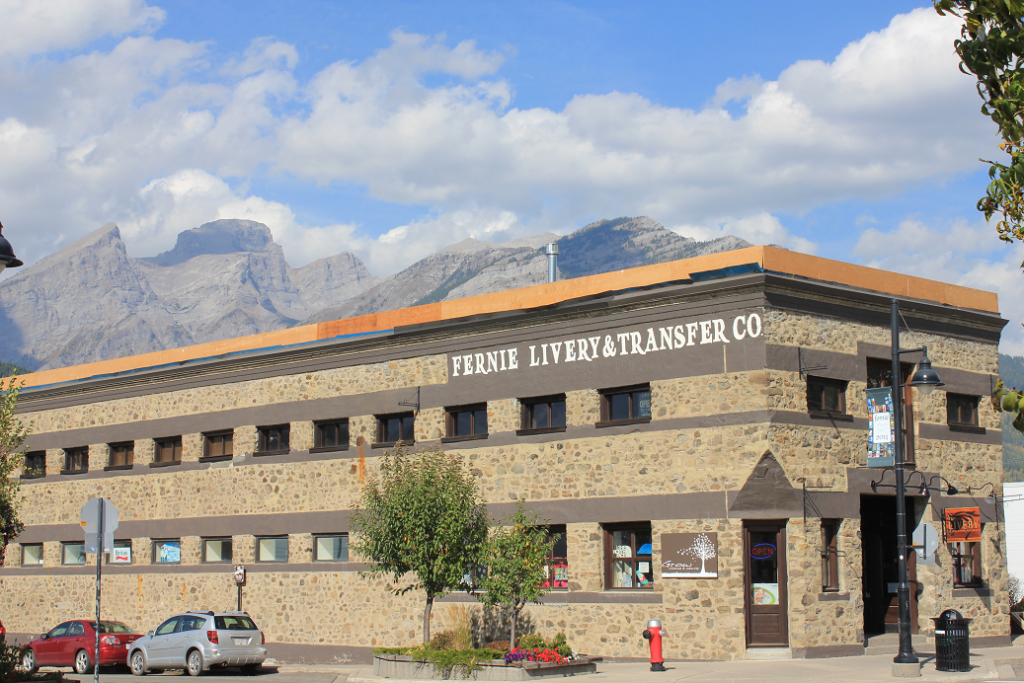 We travelled on, finding a bagel and coffee shop, where we bought a dozen bagels, of different flavours. We didn’t like them. Perhaps we’re too suburban to appreciate them. Or maybe they’re just too doughy, with not enough flavour. It was a nice shop though and the people were very nice. I bet we’d go back for coffee. Maybe we’d learn to love bagels their way.

Much to our delight, we found a t-shirt shop, just a few stores down from the doughy bagel shop. It wasn’t just your regular, run of the mill t-shirt shop either. They had a ton of t-shirts up front, proclaiming Fernie all over them, in a multitude of designs.

In the back, they had all the machines where they made the t-shirts. This should have been the best place to find, the nirvana of t-shirt shops. I don’t expect we’ll ever find a t-shirt shop with shirts all about ‘Tracey’ or ‘Harold’. My parents have tried, quite unsuccessfully, all over the world, to find a ‘Cairo’ t-shirt, due to my daughter’s name. You’d think that would be an easy find, but you’d think wrong. There are a number of Cairos in the world, all pronounced differently, but the name never printed on a shirt. All we may have is this town, and this shop is the place to get the shirt. Yet, even with that choice and chance, there wasn’t one t-shirt we liked. Well, there were a couple, but the only sizes left were X-Smalls and 2XLs, neither one appropriate.

Making our way back on the other side of the street, we wandered into the General Store, with the idea there might be a t-shirt in there. Instead, we found it is no longer the General Store. Now it is broken up into smaller artisan shops. The most interesting was the Printer Shop. 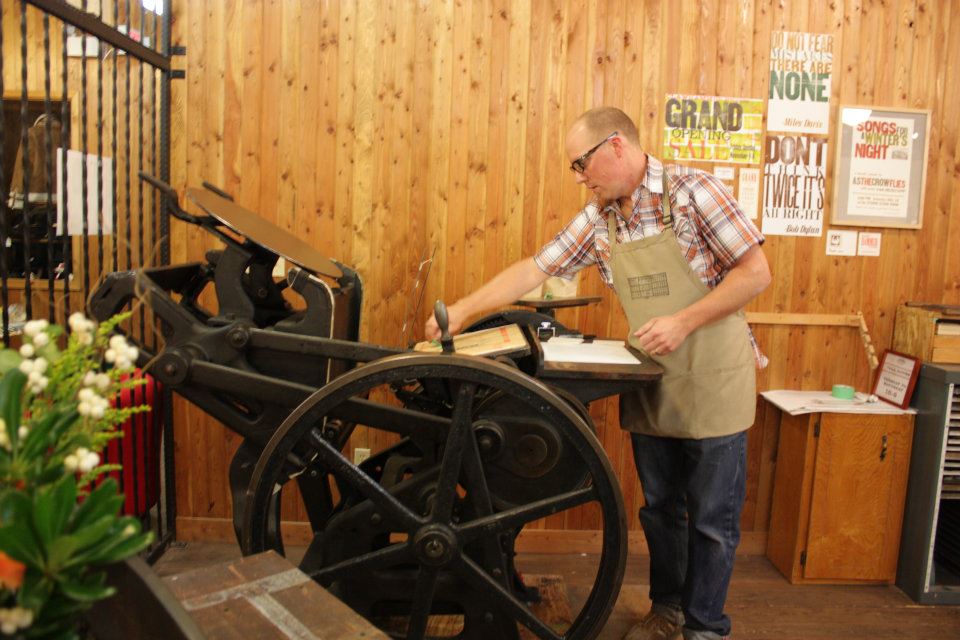 A youngish, perhaps hipsterish, artsy looking man, with a beard and a toque, was running an antique printing press. His work partner, a youngish, also artsy looking, and equally maybe hipsterish woman was laying out designs behind him.

After we left, I wanted to kick us both in the shins! We forgot to take a picture of the printing press! I found this picture on their site (hope they don’t mind!) It doesn’t look like our man, but that’s definitely the machine.

The machine he worked on looked very steam-punkish, all black and brown iron bars and gears. He was using it to print coasters, one at a time, for an upcoming music festival. 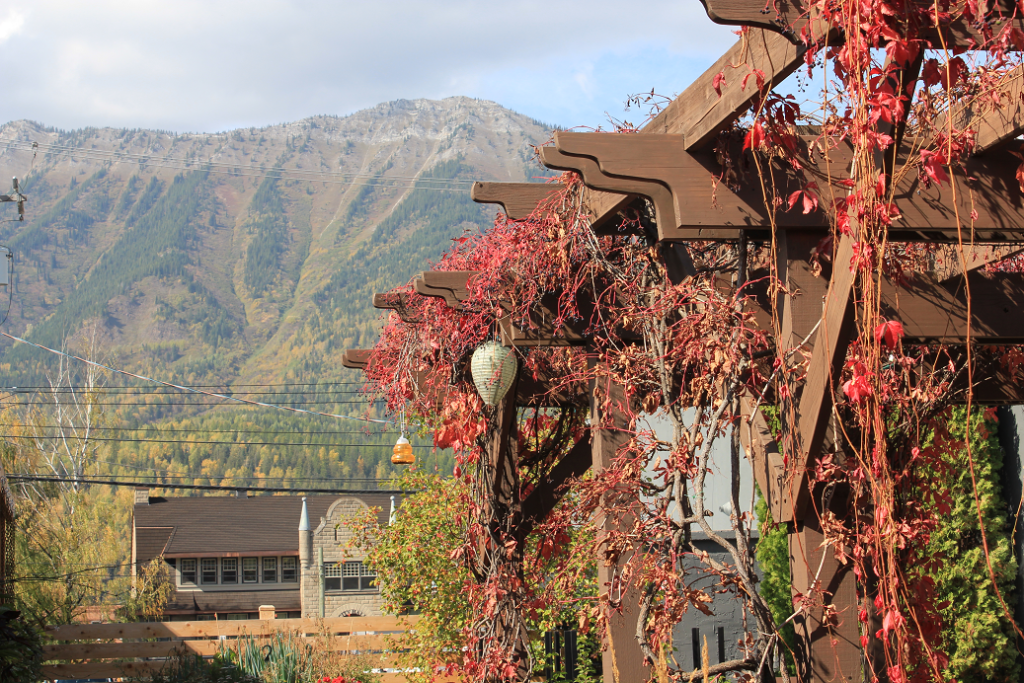 He already had the design plate and ink in there somewhere, and he’d put the coaster cardboard into the slot, then push down the big metal bar, that would press the iron doodads together and make an indentation into the cardboard and coat it with ink, before pulling it back up again, and replacing the finished coaster with another blank.

He gave us a couple of coasters as a souvenir. They look old fashioned, with the printed part indented from the rest. It made me realize why the machine was called a press. He was pressing the ink into the coaster! My ah-hah moment, as Oprah would say. I’m a trifle embarrassed I never thought about that before. 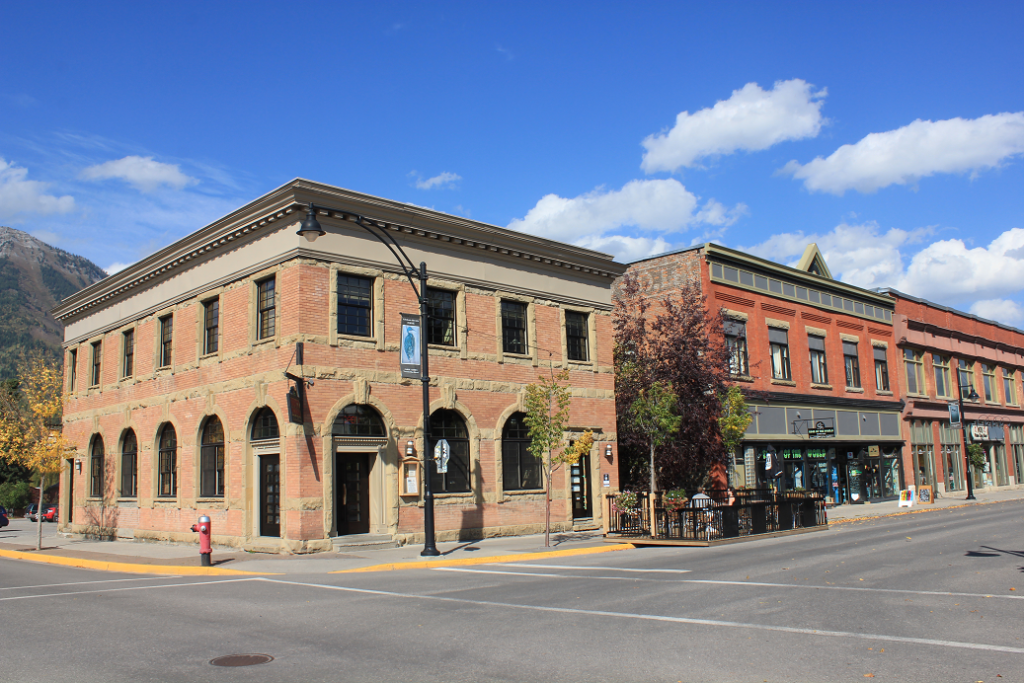 Click the image to see how they deal with sidewalk dining in Fernie.

All the brew pubs and restaurants have raised daises in the parking areas of the streets, containing tables and chairs and I could imagine how the town looks when in-season. All the young people crowding the platforms, eating and drinking, and partying. I think it’s a place we’d like to come back to, during a busier time of the year.

There were another two stores we visited on the main street looking for the illusive perfect Fernie t-shirt, but try as me might, we never did find it. Too picky? Perhaps. But more specifically, it’s one of the off-season problems – we find lots of sales, but so little stock in regular sizes. Oh well, beer glasses also make good souvenirs.

Kimberly, BC could have been my hometown