Today we made it to Lake Louise. We left the trailer back in the campground, and drove the 28km (17miles) up the highway. Today was Monday, so we expected there to be less people. As we drove by, we noticed the Overflow lot was completely empty, a good sign. The “answer guy” who Harold had driven right by yesterday wasn’t there today, but we no longer needed his help.

We headed up the hill and reached the parking line-up maybe 10 minutes later. Ahead of us we saw a truck and trailer being turned away and were so glad we had left our’s behind. Like everywhere else in Jasper and Banff, there were a ton of rental RVs, all small enough (19 or 25ft long) to be allowed parking spaces. 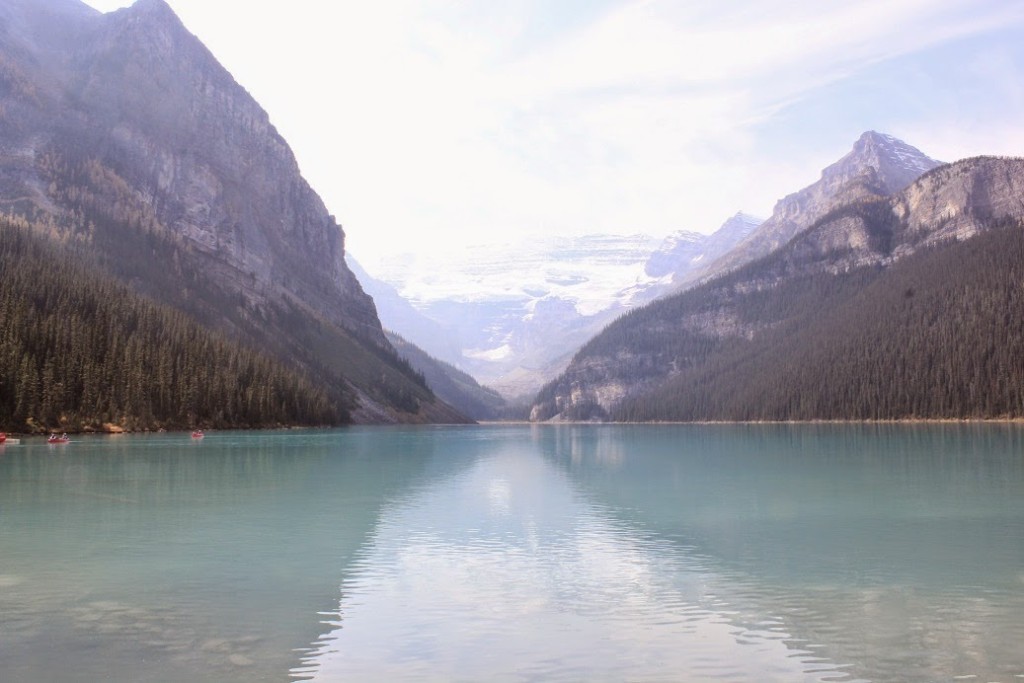 The upper parking lot was full of Canadream and CruiseCanada motorhomes. The Canadream RVs look to be higher quality, rented mostly by Europeans and accounted for most of the RVs. The CruiseCanada RVs all have either a Golden Retriever or a brother and sister image on the side entry door, dependent on their size. We were really surprised at how the rental RVs so greatly outnumber the owned RVs in the parks. I’m guessing it’s due to the time of year. 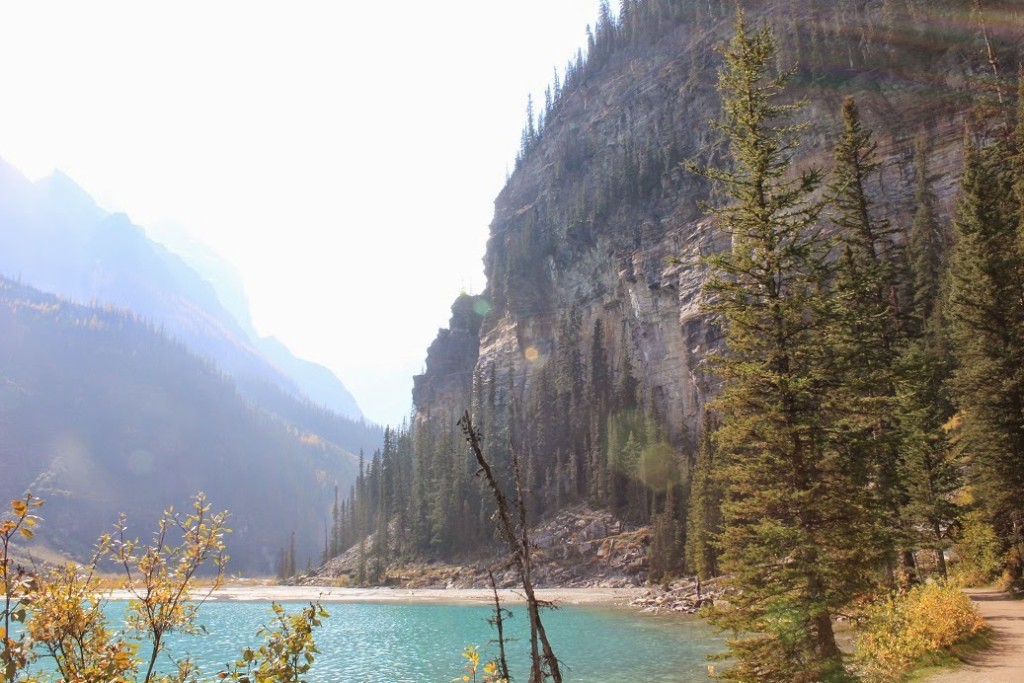 We wandered around the hotel for a while, looking at all the sites amidst the crush of tourists, then decided to hike the trail around the lake. In my memory from many years ago, as a child, I remember being able to walk all the way around the lake, but my memory was completely wrong. There are different hikes that start from the Chateau and go up from either side. 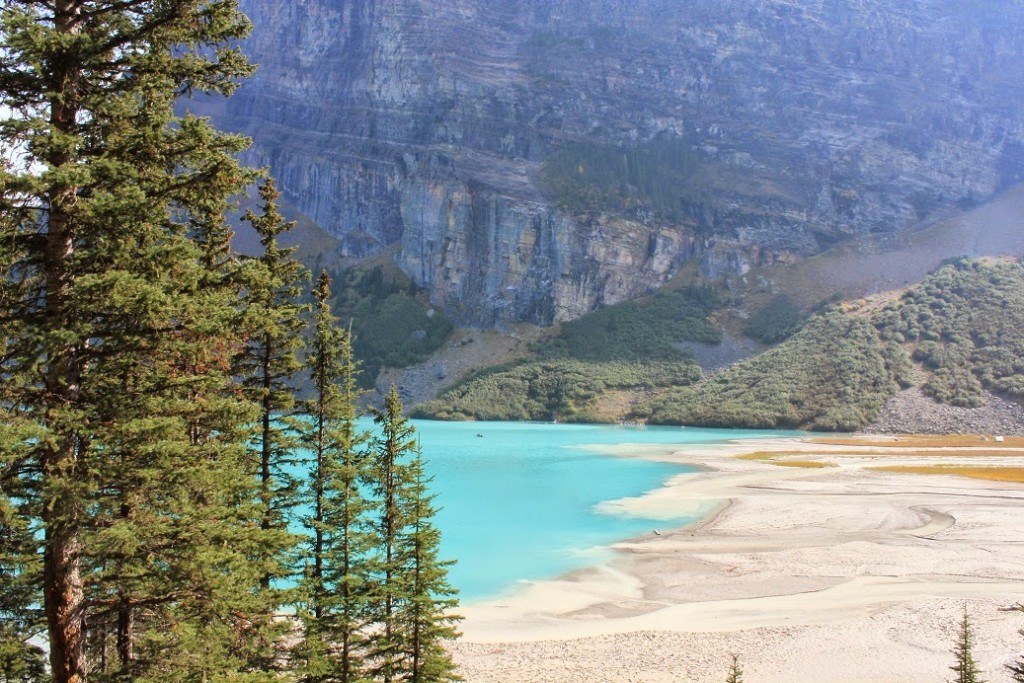 We were unsure which trail to follow, so we chose to follow others on the Lakeshore Trail along the northwest side of the lake. It’s an easy trail, much like Vancouver’s seawall for the first part. It follows the lake down to the far end.

The bright turquoise of the lake I’d remembered in the past was muted by the overcast skies, but as the sun poked through the clouds, we’d get more of the beautiful colour. There were a number of people who rented canoes and were traversing the lake, and quite a few walking along the Lakeshore Trail, but as we got down the end of the lake, there were less and less people. 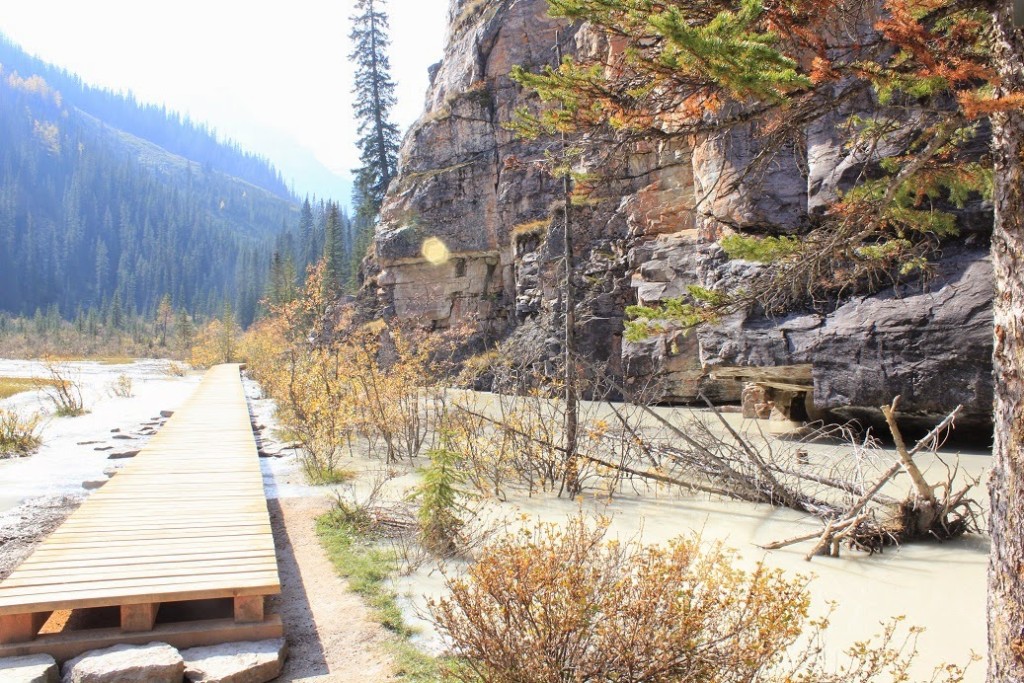 At the far end of the lake, there is a delta of silt from the glaciers up above. Then we came upon some impressive cliffs that a number of climbers were clambering up. One particular climber, a young woman, was working on a tricky portion where she had to climb out from under an overhang. 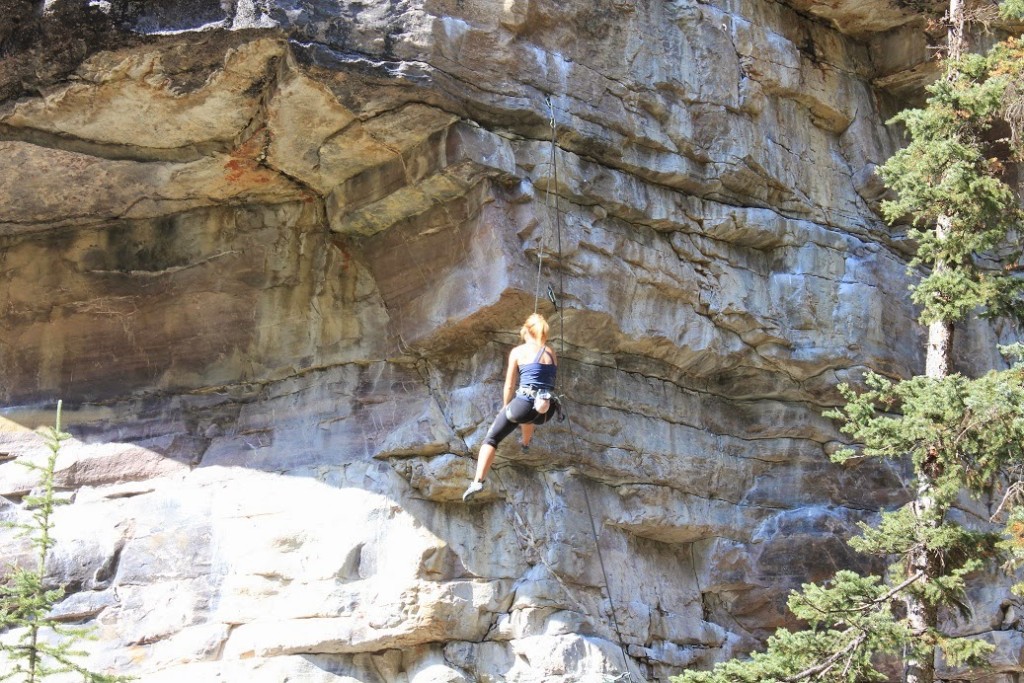 She was visibly and audibly frustrated, yelling out her anger every time she made a mistake and lost her grip. I could feel her vexation, as she swung back and forth on her safety line. We wondered aloud why she’d choose such a publicly viewed area to practice. It seemed the few viewers were possibly getting on her nerves as well. We took a few pictures and continued on. 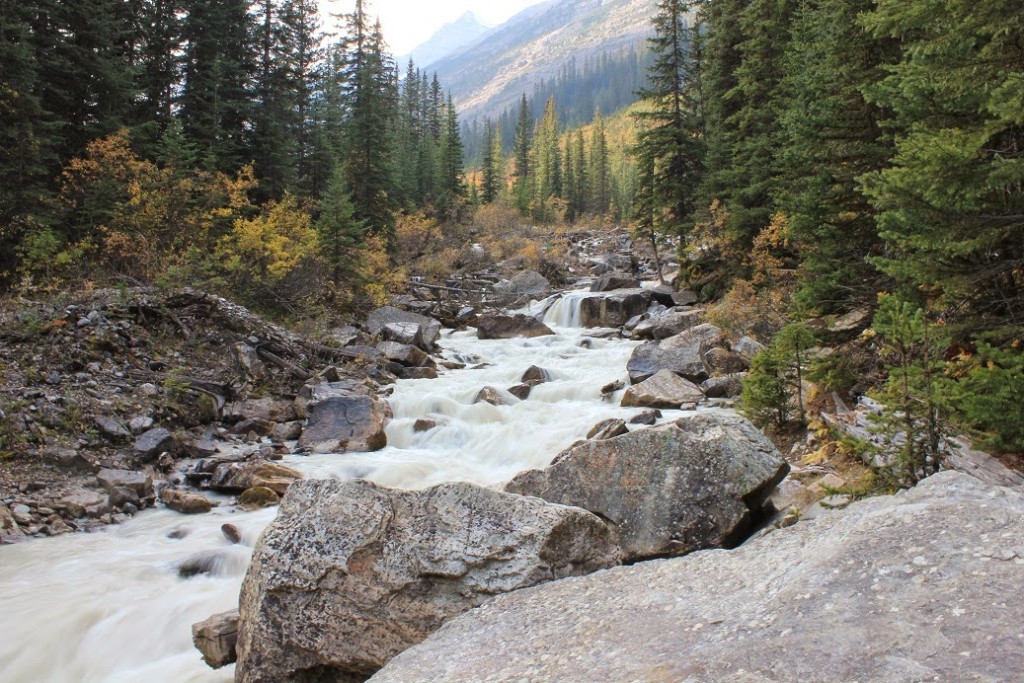 At the point where we saw a sign notifying us that the Nordic Ski trail had ended, the trail started to climb up into the forest alongside the river. At times we were completely alone on the trail, but as it got later, there were a lot of people making their way back down. We hadn’t had any plans for how far we were going, and had no idea how much further the trail went on. Due to the lateness of the afternoon we decided to turn around and head back. 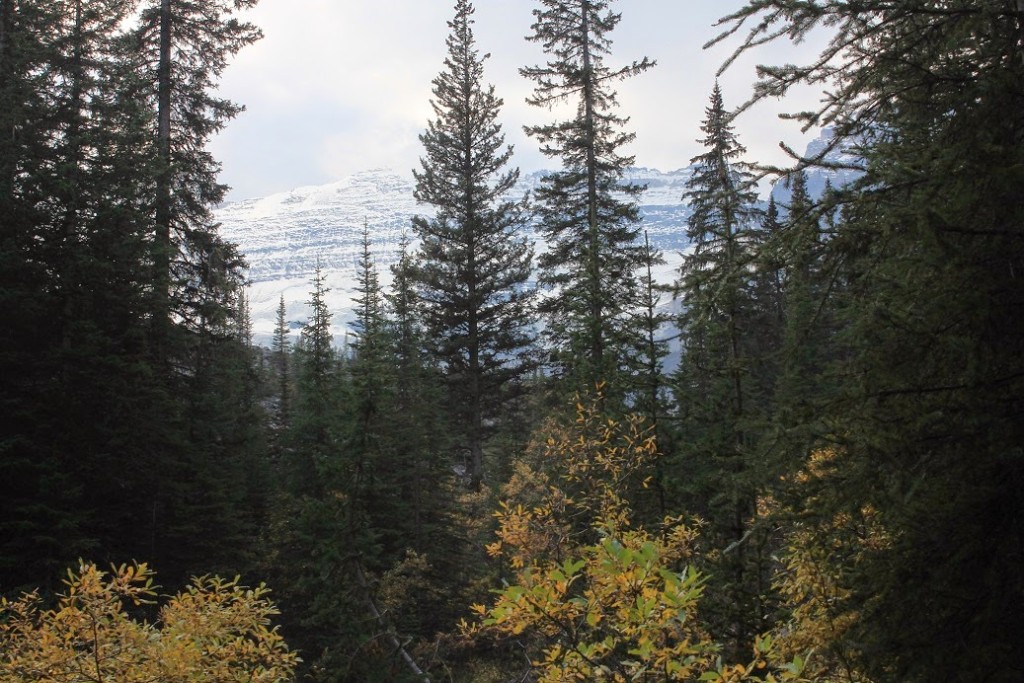 I hadn’t done any research on the hiking opportunities here. In hindsight, that was a big mistake. Since visiting, I’ve learned about so many great hikes up there. From the parking lot, it’s 11 kms to the Plain of Six Glaciers Teahouse and back. My GPS told me we turned around at the 4.5km mark, going 9km total. Next visit, we’ll give ourselves more time and come better prepared to make it through the loop hitting the teahouses, and glaciers. I’ve read it’s a 14.6km loop, so we’ll make sure to leave early in the morning. 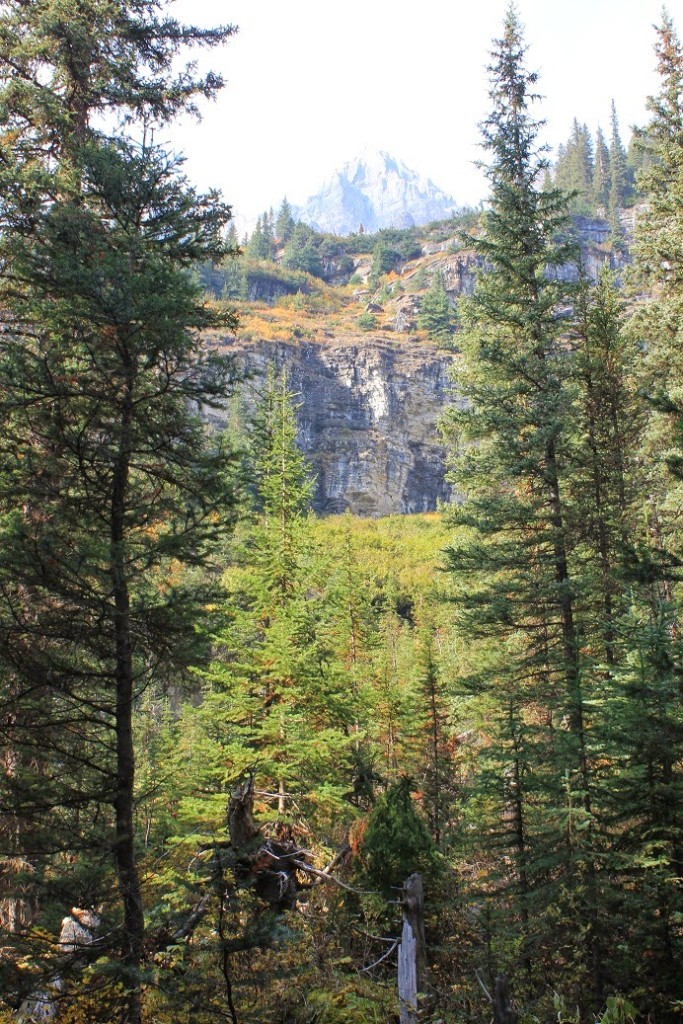 Back at the campground, we had dinner and lit a fire, then cards and S’mores again, reprising the events of the night before. It was an almost identical night as the previous, if you don’t count my dancing around the fire after I roundly trounced Harold’s butt at Rummy!

Kimberly, BC could have been my hometown