We took two days to drive across Montana. The west side was more to our liking, with trees and streams and mountains. Once we got to the centre and east side, it was one golden rolling hill after another, without many humans in sight. Even the gas station we stopped at no longer had humans there. We paid by credit card, and filled up. The signs on the windows looked old and ratty, advertising treats from years gone by. It felt very Walking Dead-ish, without all the zombies. 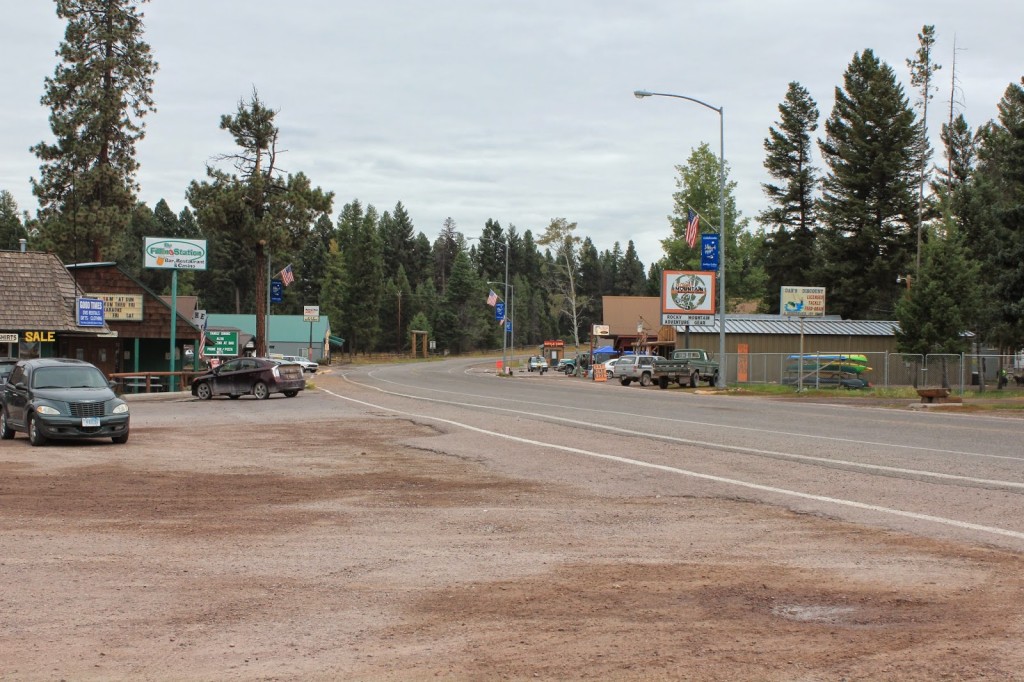 Montana seems to have a split personality. There are a ton of tiny casinos everywhere, even attached to gas stations, and there are also huge signs warning people that gambling is a sin and they will go to hell if they break the lord’s commandments. The casinos aren’t the sort we enjoy so we didn’t stop.

The temperature went down more the further we drove east. We finally stopped for dinner in the small town of Glendive, MT, at a diner. The place was packed, with almost all men. I figured they must be truckers. We took out our phones while waiting and were happily reading, when a big gruff voice broke in.

“You two are like a cuppela kids on yer phones.” We looked up to see two men walking by our table on their way out.

“Just travelling and catching up.” I shrugged.

“Where ya from?” the thinner man asked.

“I went to Canada once.” We were only a few hundred miles from the border.

“Lived there a while playing baseball, in Winnipeg. People there are real nice.” It’s weird how Americans always say that to us. I know some horrible Canadians too. It’s as if we put them in hiding when Americans come to visit, or something. Or it might just be the way we say “Sorry” for everything. 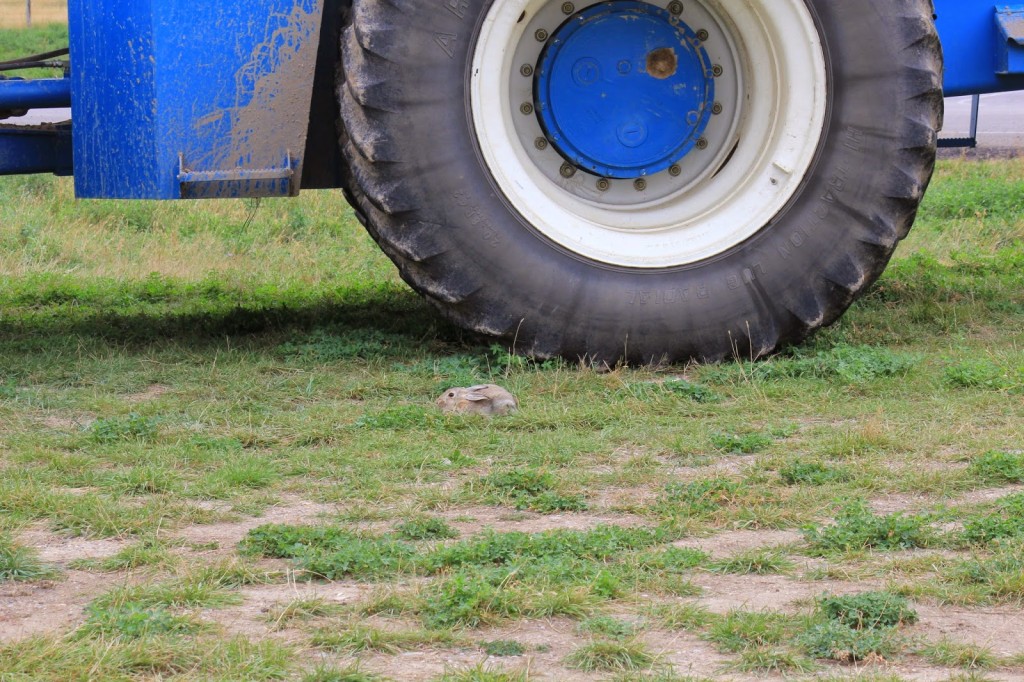 We asked them about themselves. They weren’t truckers and the others mostly weren’t either. The truckers keep going until they get to the next Pilot station. The guys who frequent this place are mostly oil, rail, and construction men. The big, burly one was from South Carolina, and works for the railroad. He comes up here to make money and then goes home when the area gets too snowy and they close down the work forces. The thinner guy comes up from Tennessee each year to work in construction. The oil industry here is booming and there are more jobs than people available for them. They make a ton of money and then go home for the winter.

After dinner we drove a half hour further, just over into North Dakota. We thought we’d stay at the Pilot station overnight but it was all full so we followed another RV into the North Dakota welcome centre parking lot next door. There was a sign at the entrance telling us in big letters “NO OVERNIGHT CAMPING”, but at 9pm the place was full of trucks and a couple of RVs so we pulled in ourselves.

I figured we’d be kicked out early the next morning, but thought the place wouldn’t be open until maybe 9am. I took the dogs for a walk at 8 and checked to see if they were open yet and they were, but only a cleaning woman was there. A young woman, covered in tattoos and piercings, potentially homeless, perhaps travelling through, was fast asleep on one of the inside metal benches. That was how I came to the realization that the welcome centre is unstaffed and open 24 hours per day. I stocked up on books and pamphlets about the area and walked back to the trailer. 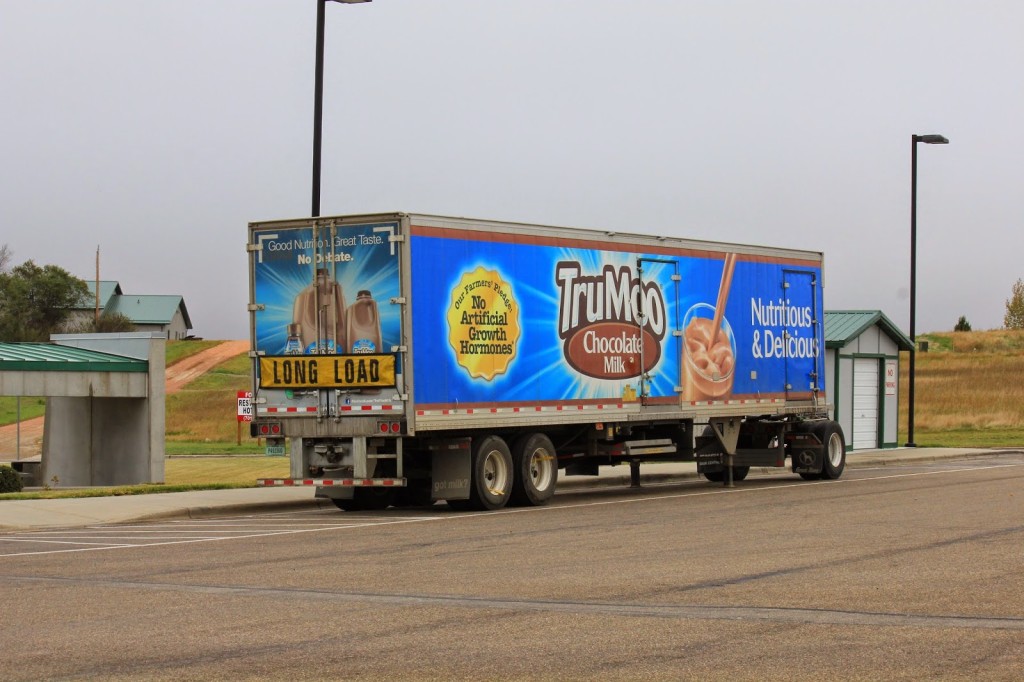 It soon appeared to us that nobody cared if we stayed there all day and night. Maybe we could live there if we wanted to – as if. Trucks kept coming and going, one even dropped off his big trailer – one with a big logo advertising “TruMoo Chocolate Milk! Nutritious and Delicious!” Oh, and it has “No Artificial Growth Hormones”.

A car drove into the parking lot and let out his dog in the pet area, all by himself, ignoring the “Pets must be on leash!” sign. Harold remarked the poodle-ish dog looked just like the scores of sheep we saw all day yesterday on our drive across Montana. The owner of the car didn’t get out, but instead started to drive away. At first I thought he was about to leave the poor thing, but no, he was slowly driving along the pet area, and the sheep-poodle was following along beside him. I understand, it’s kinda coldish out there, and maybe this is a skill they’ve worked out for the super cold North Dakota winters, but come on, if you have a dog, get out there and walk the damned thing.

Why the hell is this place called Beach? It’s freezing cold and landlocked. It seems almost like sarcasm, but the truth is that it was named after Captain Warren C. Beach of the U.S. Army’s 11th Infantry. He led an expedition of railroad surveyors through the area in 1880. That maybe sounds rather boring and not very adventurous, but due to my love of the AMC show Hell on Wheels, I feel like I know the story well about the rough life of those who put through the railroads going from east to west. If you haven’t seen this show, you have to! It’s a great show and it’s given me an historic relevance to many of the places we are visiting on this trip.