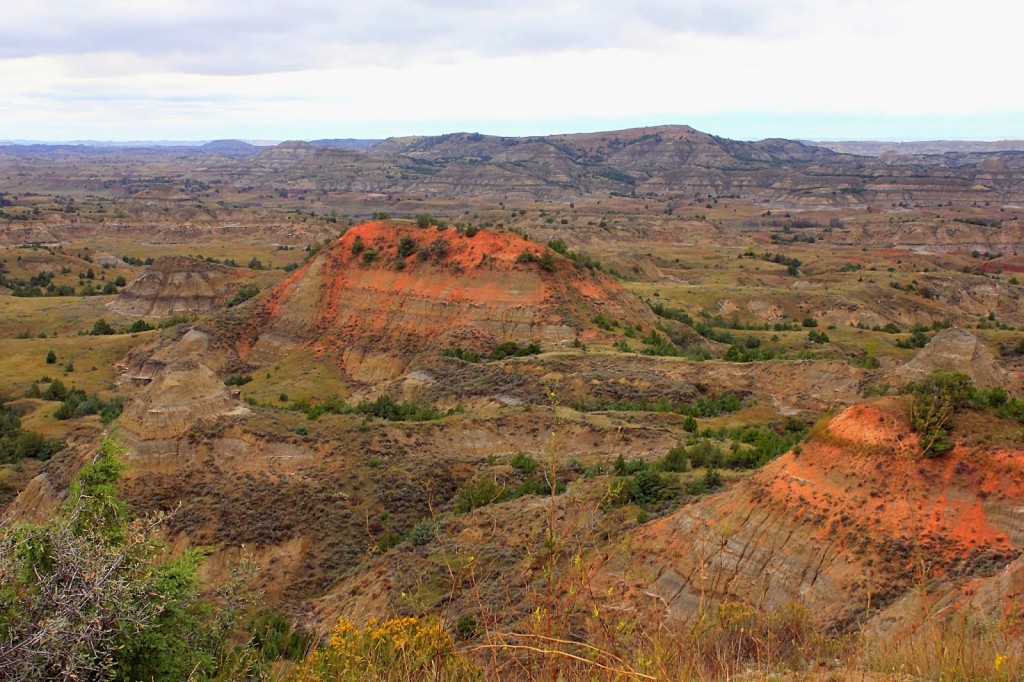 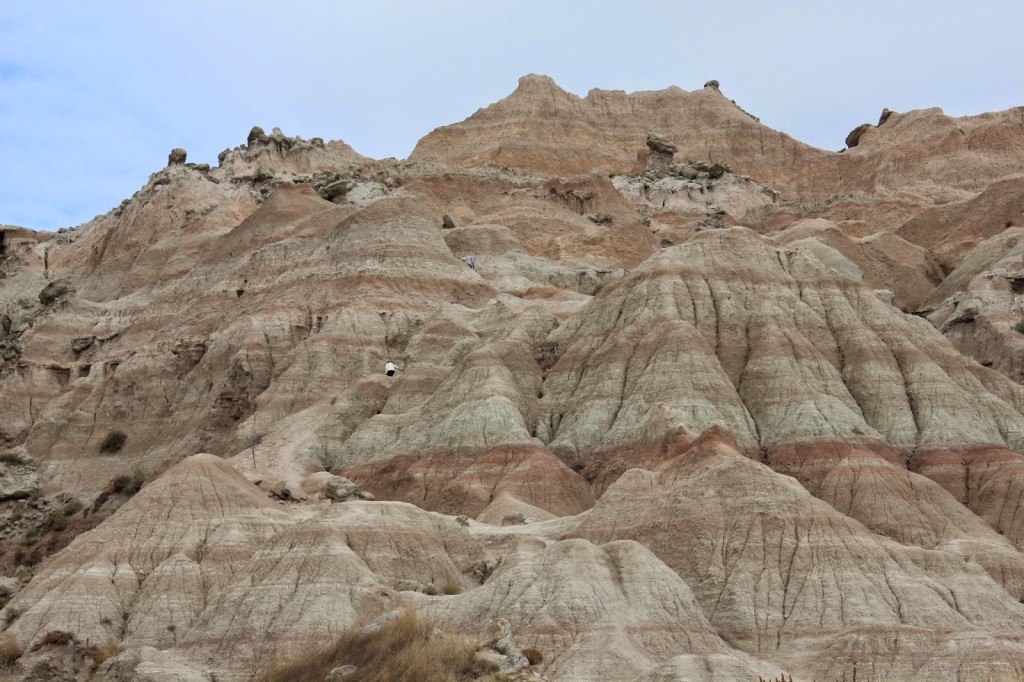 Bismarck was mostly just an overnight spot at a Walmart, that turned into a wonderful find. We went looking for a pet food store and chanced into trying Pancheros Mexican Grill. I figured I might be able to find something to eat there that was meat-free. Imagine my excitement when I found they have a vegetarian option – all their products include a choice of beef, pork, chicken or SEASON MARINATED VEGGIES. (Yes, I’m yelling!) They make their tortillas fresh there, and everything was just so tasty, I was ecstatic. 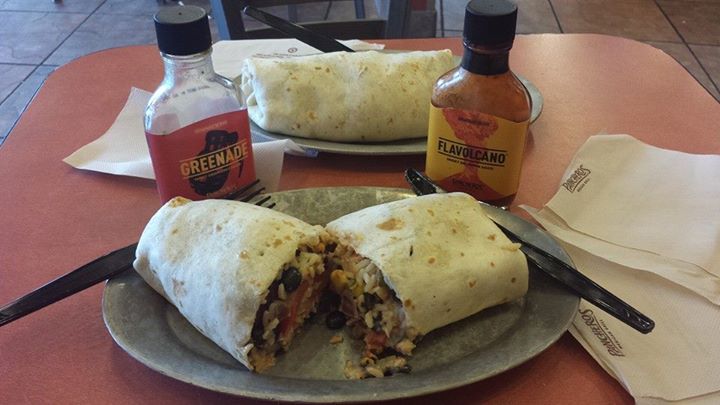 Bismarck should be renamed “Help Wanted”. Every business there is looking for employees. If you don’t mind living in a place that is very, very cold in the winter and very, very hot in the summer, and you want to make a lot of money, this is the place to come. I recently saw a news show about the oil boom in North Dakota. People come from all over, with absolutely no skill at all, and find themselves hired the same day and paid very, very well. 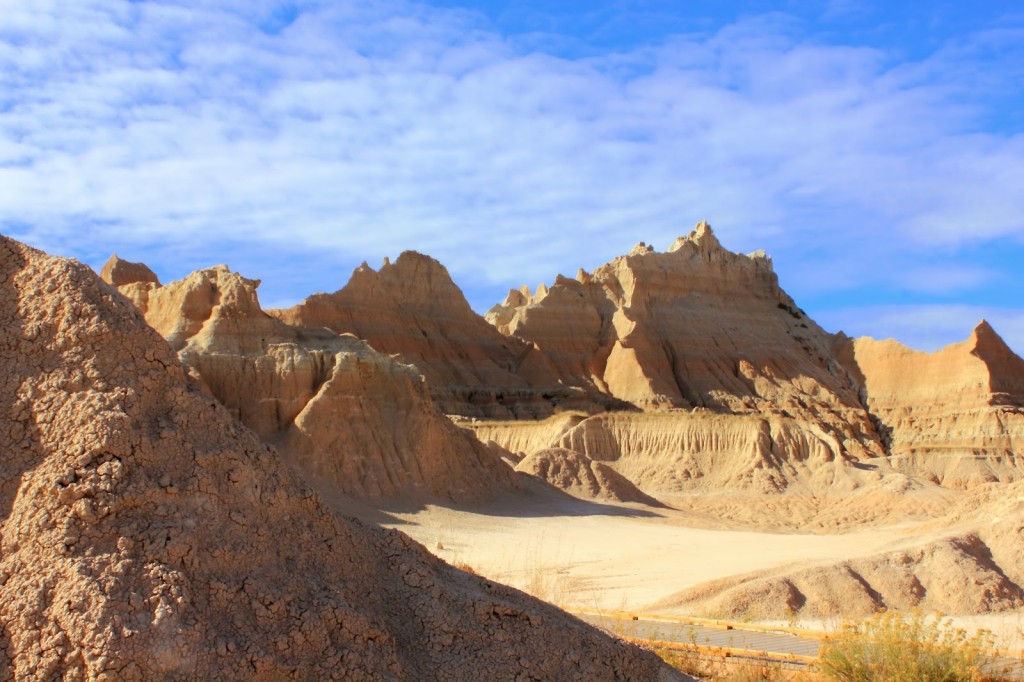 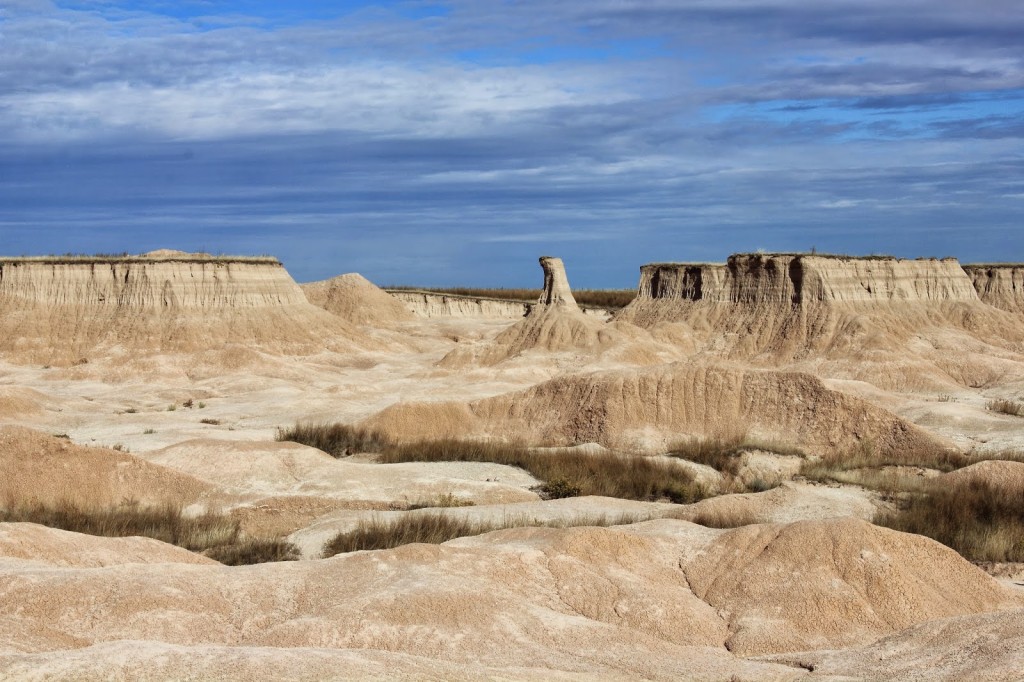 We headed south from Bismarck, towards South Dakota and the wind whipped up to a frenzy. That evening, at a Walmart in Pierre, SD, we hunkered down by the big rigs and were pushed around all over the place. I took Teddy out for a walk and we were pushed right the way over to the other side of the lot. I spent the night sure that we were going to be picked up and whipped around like in the Wizard of Oz, but miraculously we survived the night. 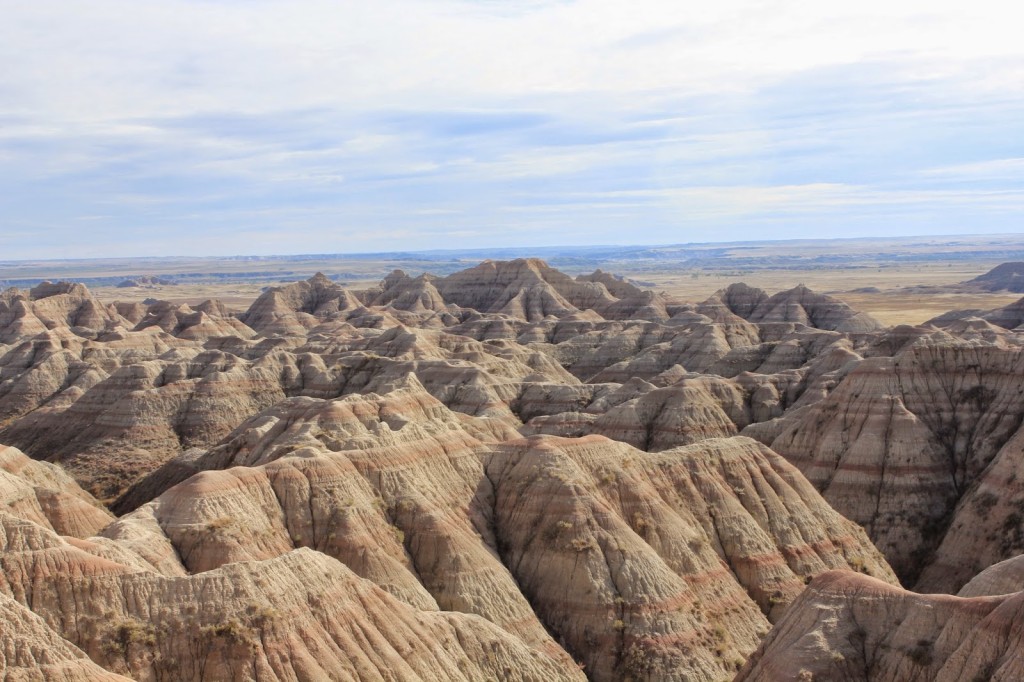 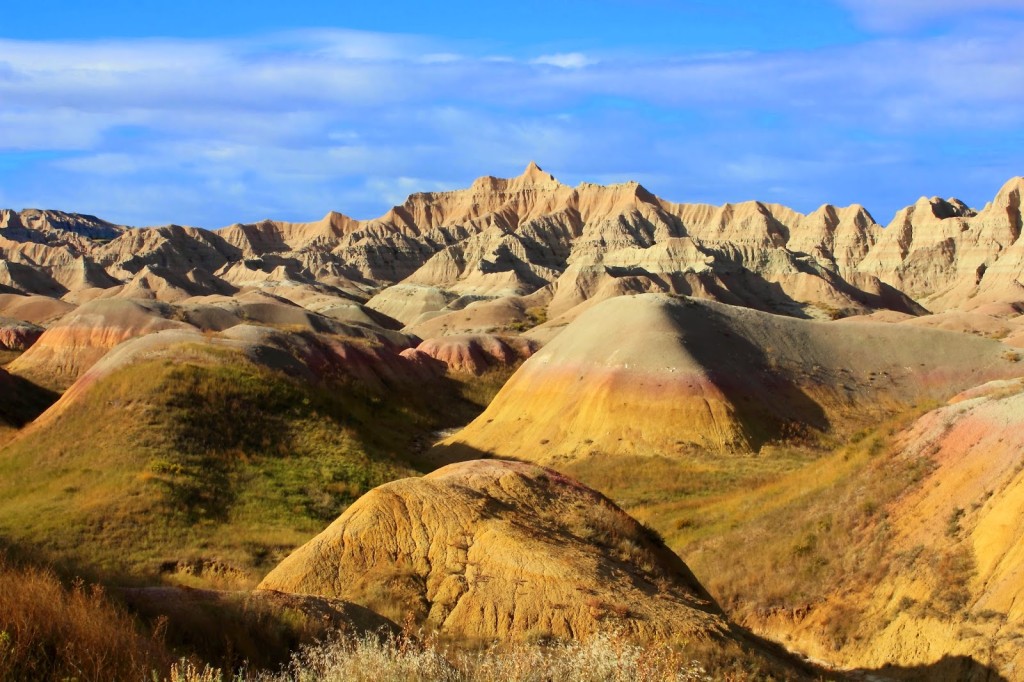 The next day, we waited out the winds, leaving when it died down some and drove more into the wind, which eats up the diesel and slows us down but is a little better for my nerves than being hit on the sides. Every so often we’d get a bigger gust and my heart would jump up into my throat. 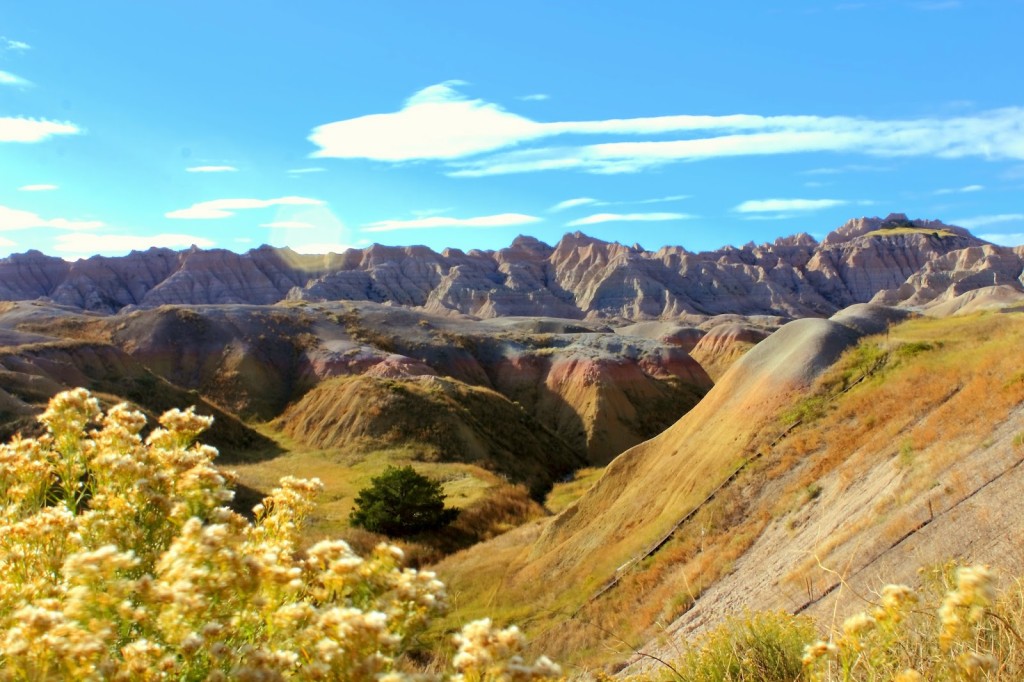 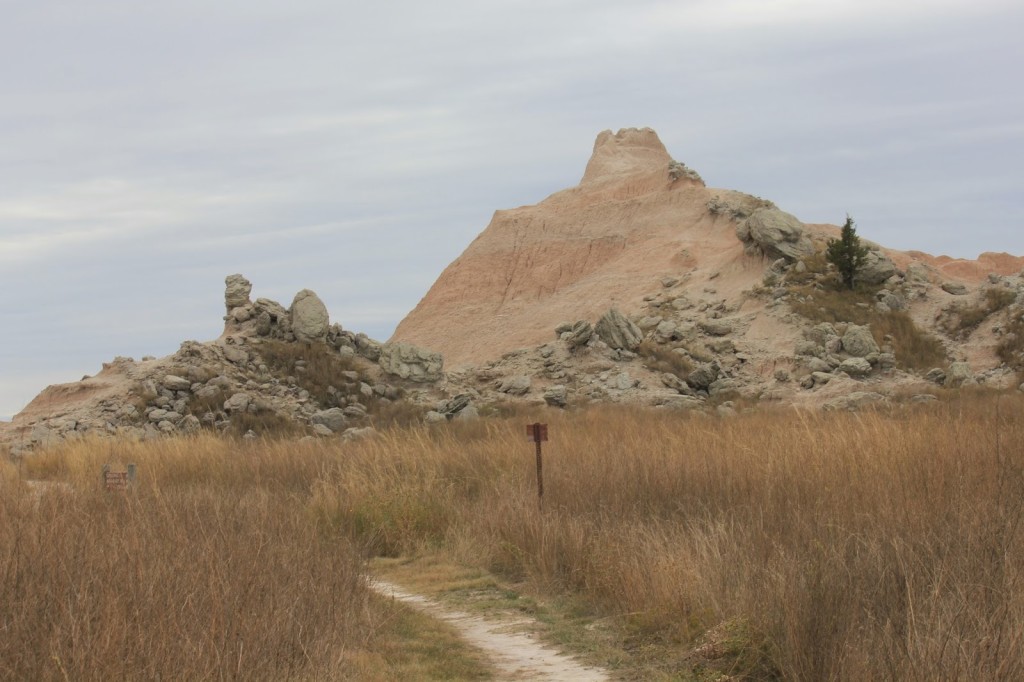 We arrived at the Badlands National Park well after nightfall and took the dogs out for a walk around the area. The wind had died down to nothing, and the sky was clear and black, with stars everywhere, and a huge moon well on it’s way to full. The dark cliffs surrounding us were surreal and spooky. We could hear the wolves howling close by so we opted to cut the dog walk short and carried Toonie back to the trailer. I thought we might stay outside for a bit but it was pretty cold and we couldn’t have a fire here, so we went inside to read. 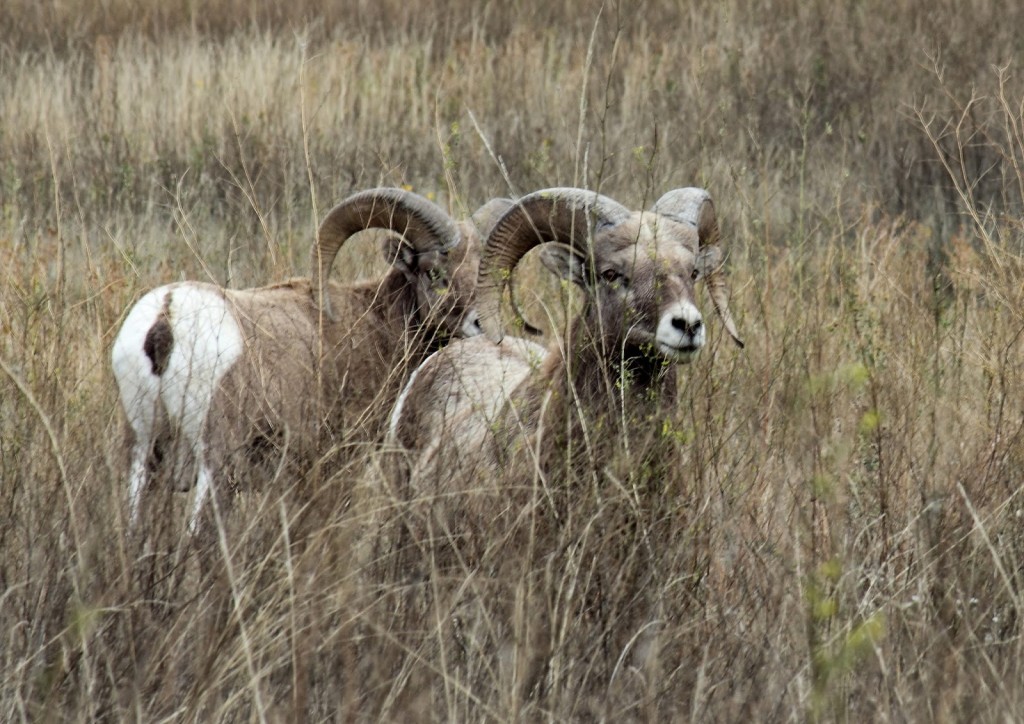 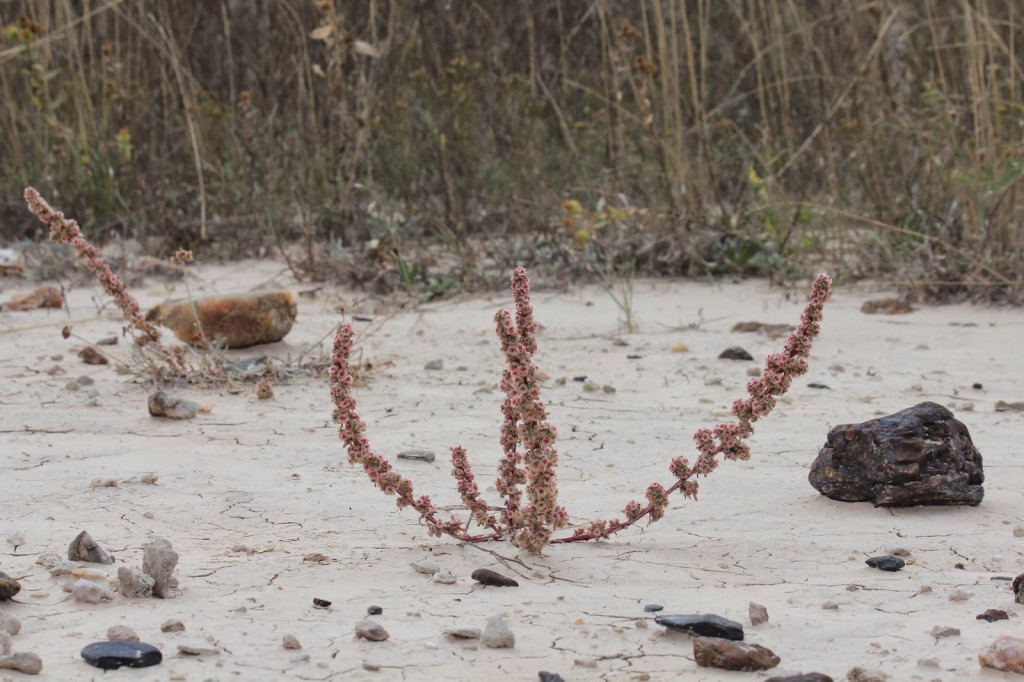 The next morning we were up early, and headed outside to take a look around. We were in the Cedar Pass Campground, the main site by the Visitor’s center. It has 96 sites in two ovals, and has the most wonderful views of the Badlands formations. 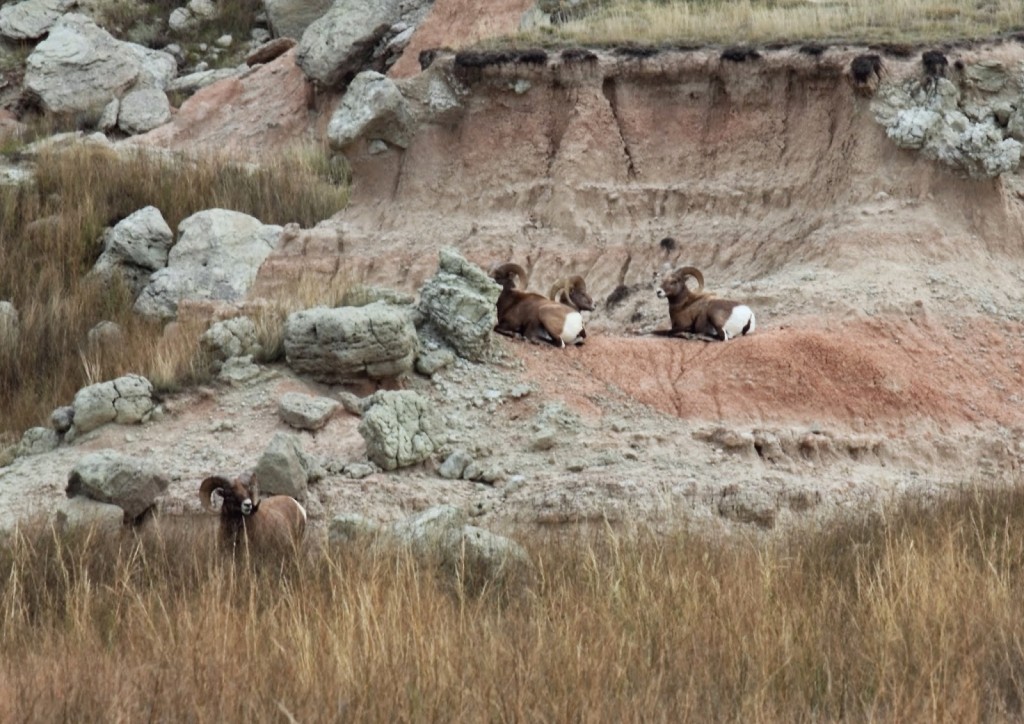 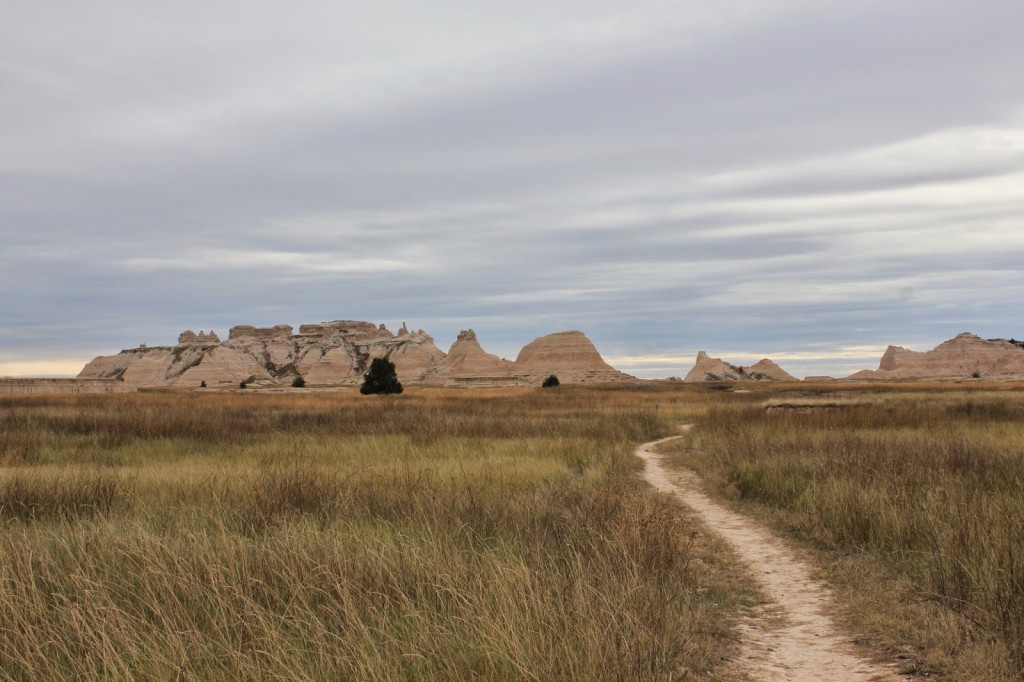 The weather was perfect, warm and sunny, not cold, and not hot. Just right for hiking. We took the dogs in the truck and drove down the Badlands Loop road to the Saddle Pass trail. This trail is listed as strenuous. You climb up the wall of the canyon to the top where it connects to other trails. Seeing other people having trouble coming back down, I was glad we remembered to bring our hiking sticks for a change. Usually we forget them, even though they are always in the truck, and damn our memories when we realize we could have really used them. 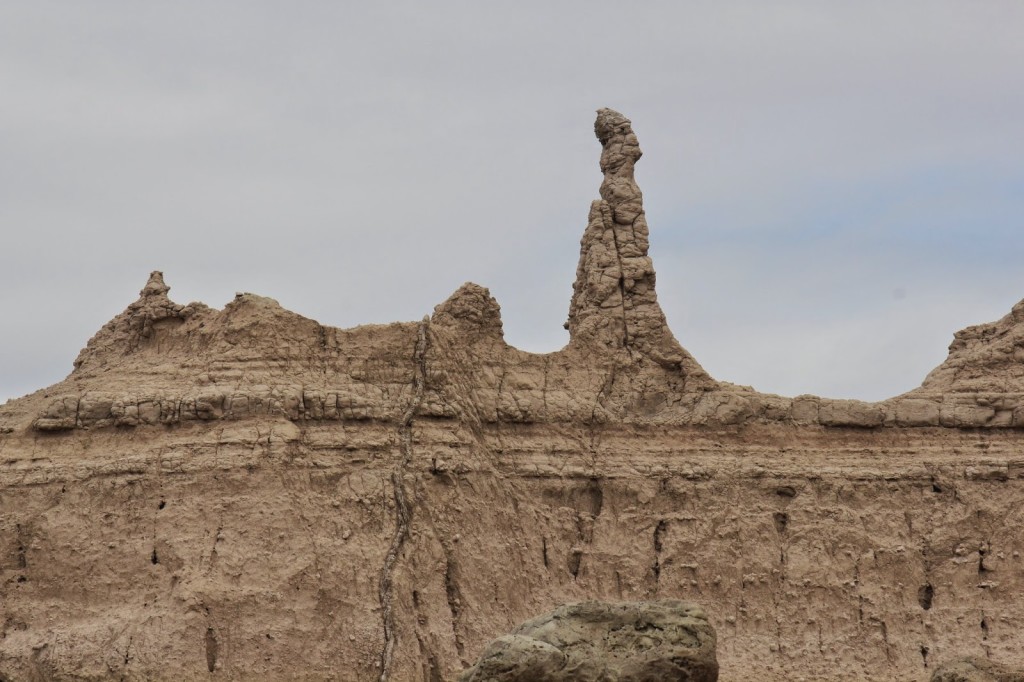 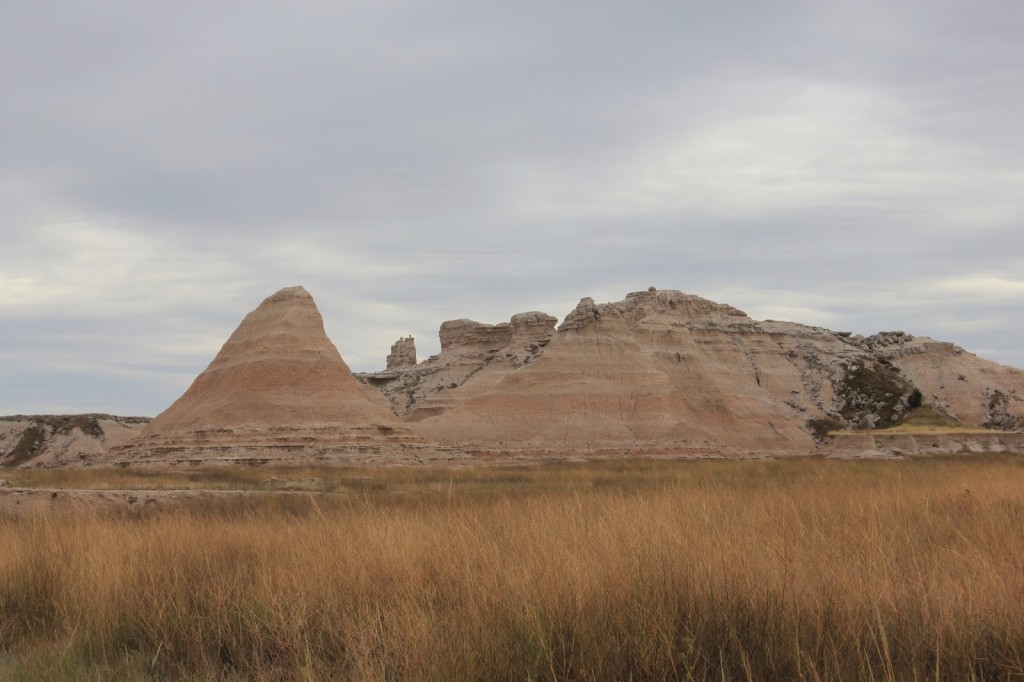 At the top, we were met with a small herd of Bighorn sheep. There was a man walking amongst them, trying to get close-ups. I called him crazy, under my breath, and demanded Harold not do the same. He did move in closer but kept his distance. I walked down the trail with the dogs, happy for the waist high grasses that kept Teddy from seeing and barking at the sheep and Harold quickly caught up. It was a nice hike, out the Medicine Root Trail and back along the Castle Trail, about 5 miles in total. 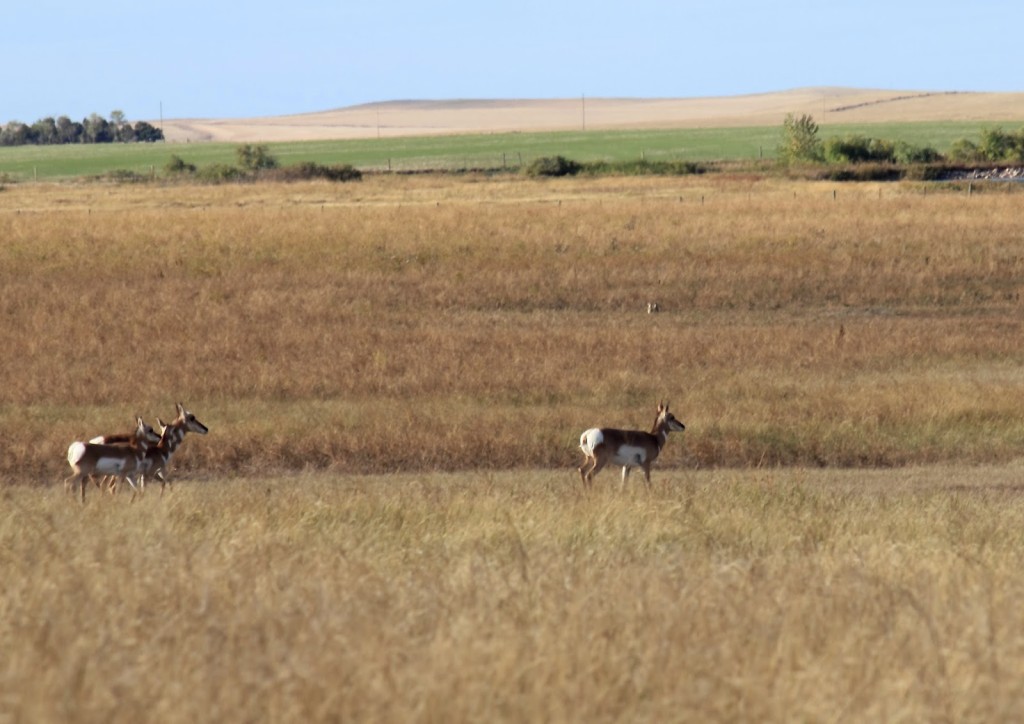 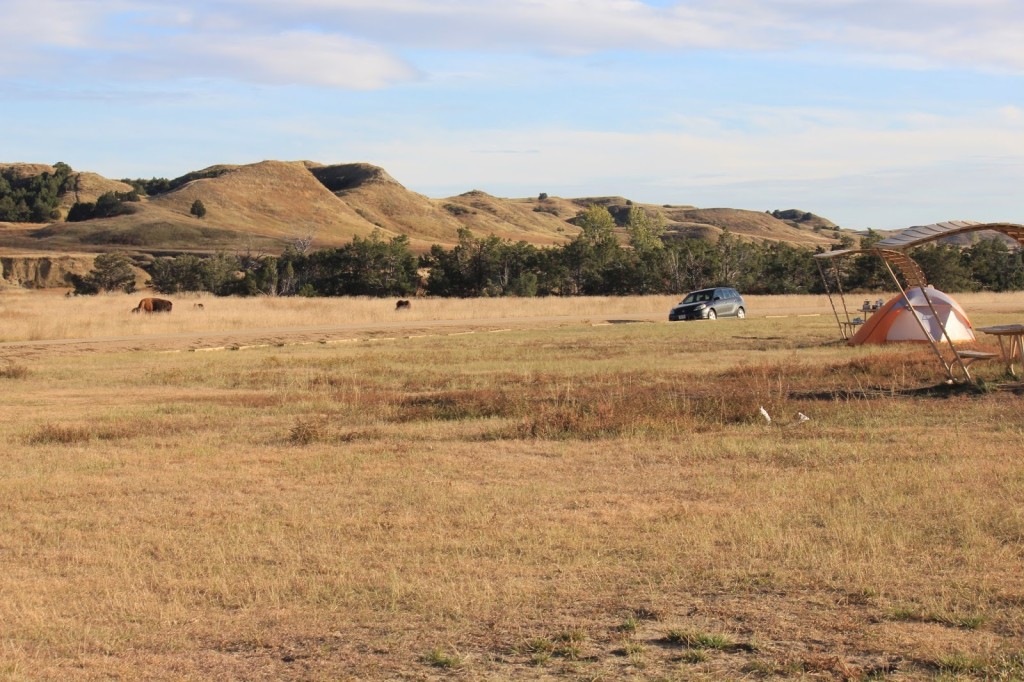 When we returned to the cliff top, we saw the herd of female sheep was now being guarded by a huge, intimidating male. I’m not sure if it was because of our dogs, the man who was getting too close, or just coincidental. Part of me, the dark humour side, pictured the ram having taken down the man, the body laying at his hooves, just out of our sight under the tall grass. Back in reality, there was a woman coming up the west trail and a couple the other way. The ram had no interest in them at all. He just stared right at us, moving his huge body as we circled around him. It was obvious he could smell our dogs, and I was so happy they couldn’t smell or see him. Toonie, the Chihuahua, would never have been a problem, but Teddy would have been. I was so in awe of that beautiful ram, and also very scared he was about to charge us, but he never did, thankfully. 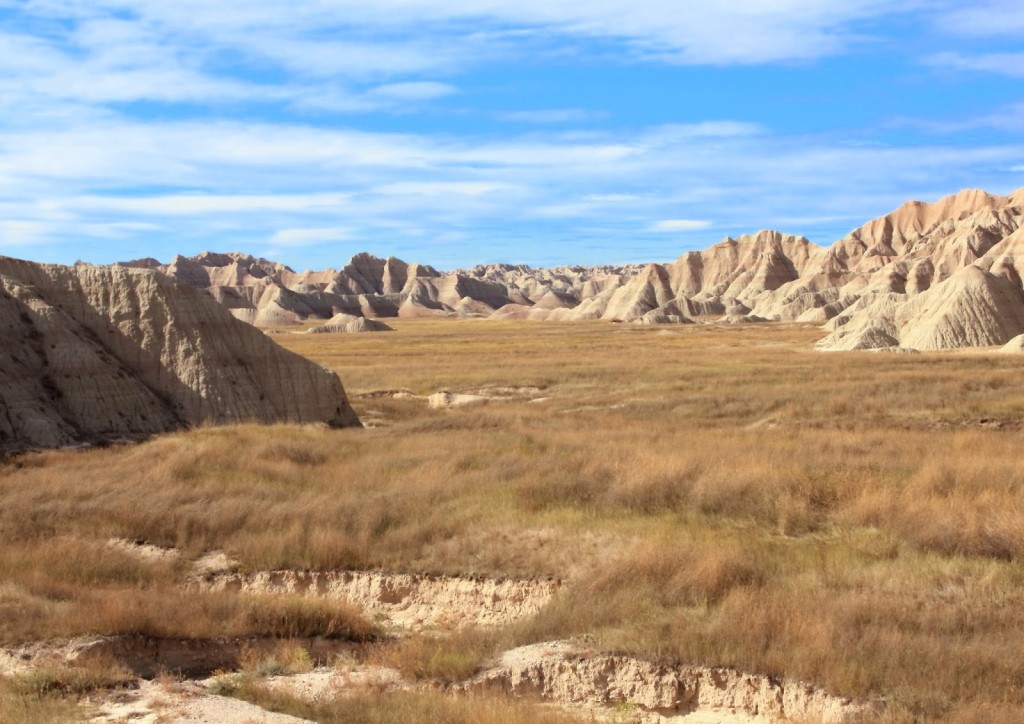 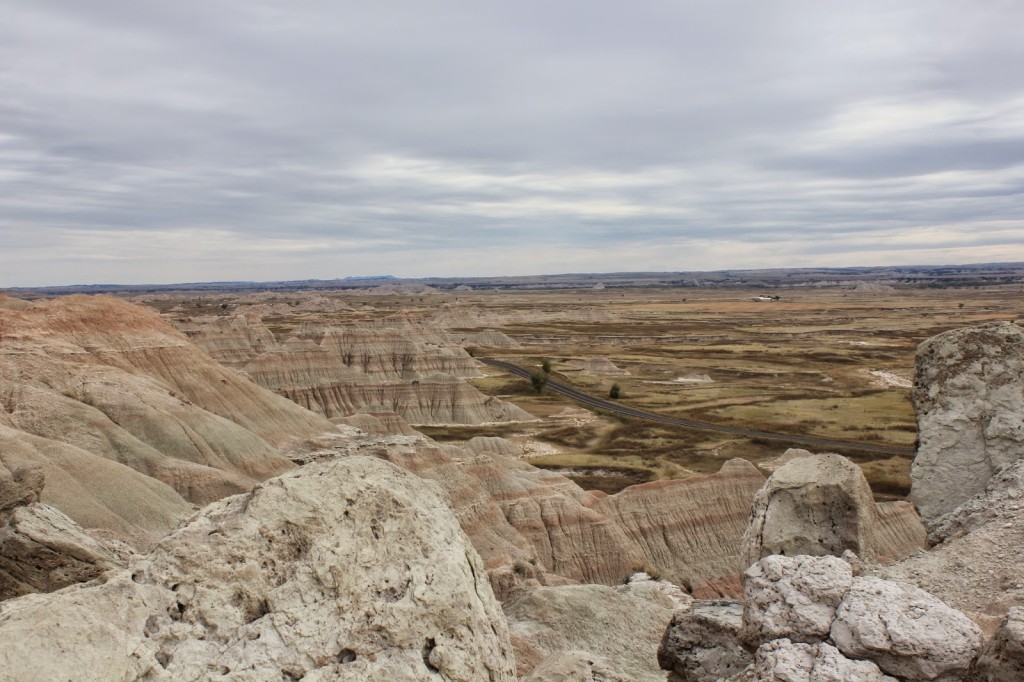 Run-ins with wildlife are exactly why many State and National parks don’t allow you to bring dogs on hiking trails. I was surprised that it was allowed in the Badlands, except on the trails that had been built up on wooden ramps to accommodate handicapped people. I can definitely understand the need – who wants dogs relieving themselves all over that? 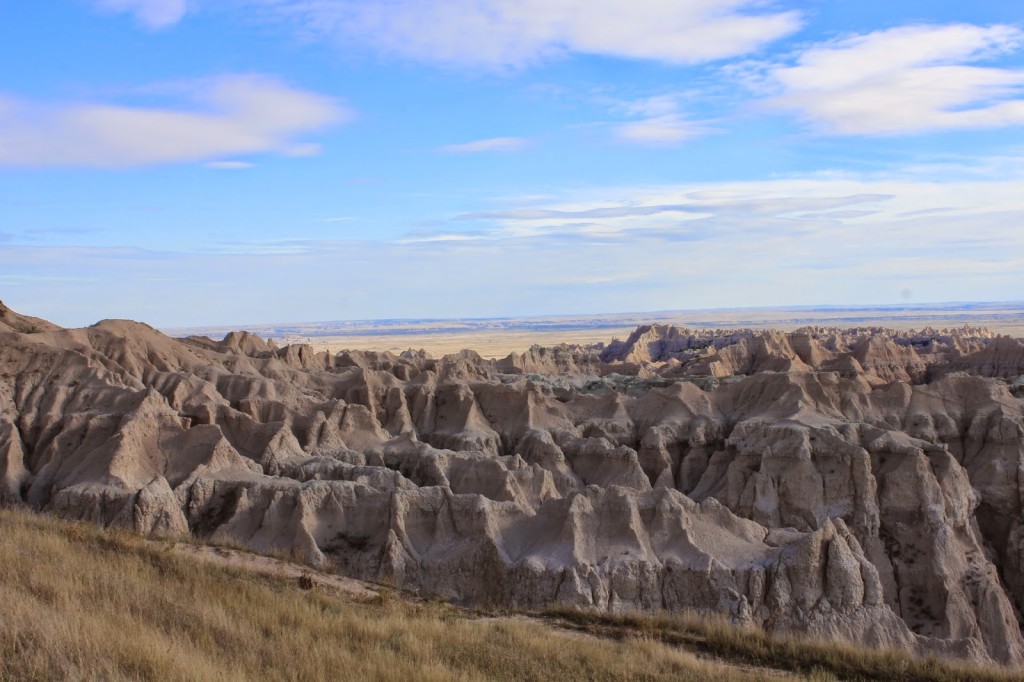 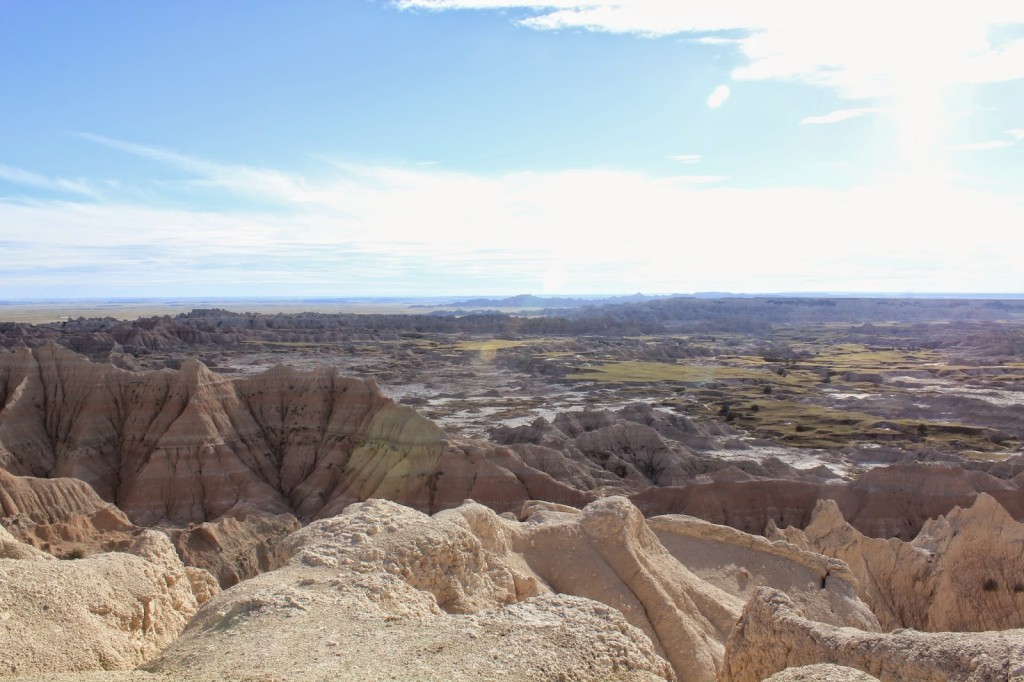 Climbing back down the wall was a pain in parts. I started off carrying Toonie, but then worried I might fall and hurt her, so I put her down and she was fantastic, so small and close to the ground, she zoomed down the cliff as if she did it everyday. 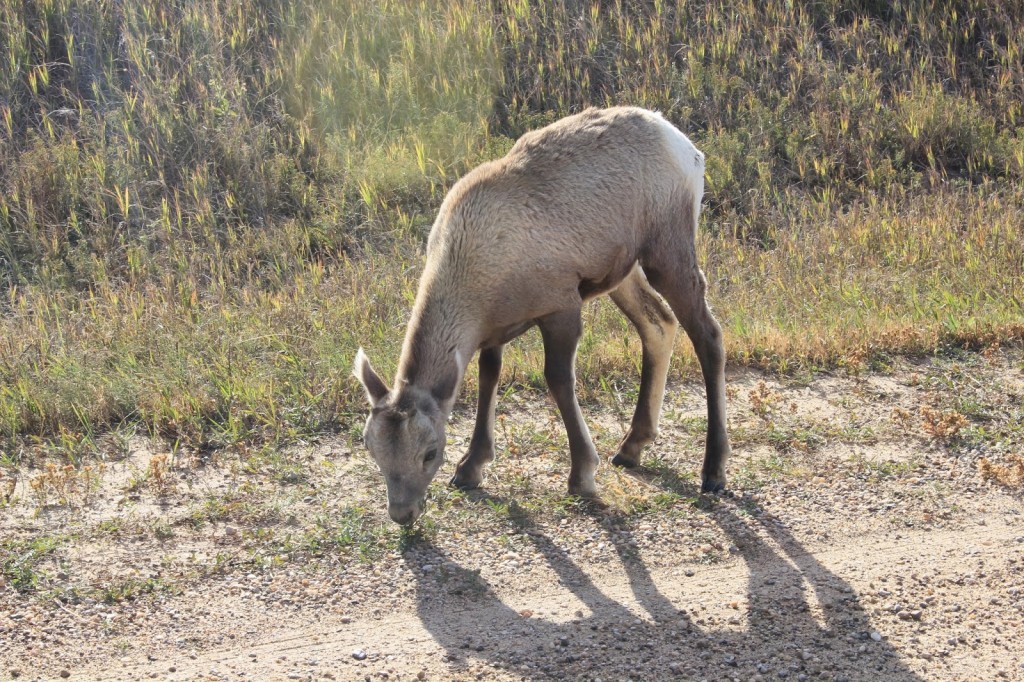 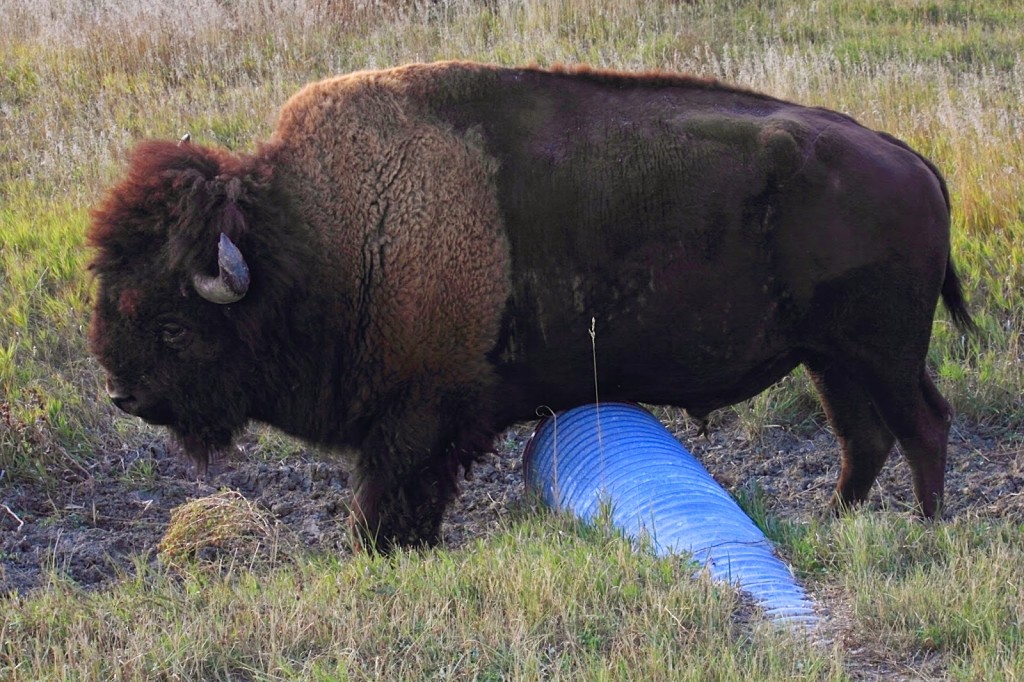 We got back in the truck and continued our drive through the park. Around every corner is another amazing sight. At one time rhino, horses, bears, and saber-toothed cats roamed here. They are all gone, but there are bison, bighorn sheep, prairie dogs, and black-footed ferrets. The wolves had been extinct here at one point, but were reintroduced and thrive here now. 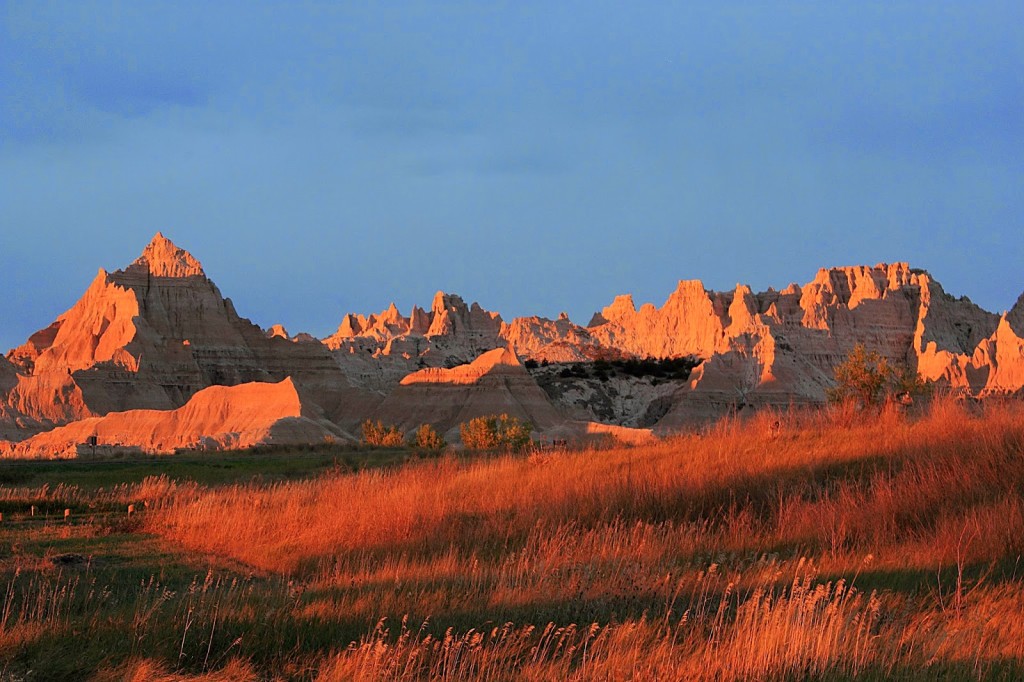 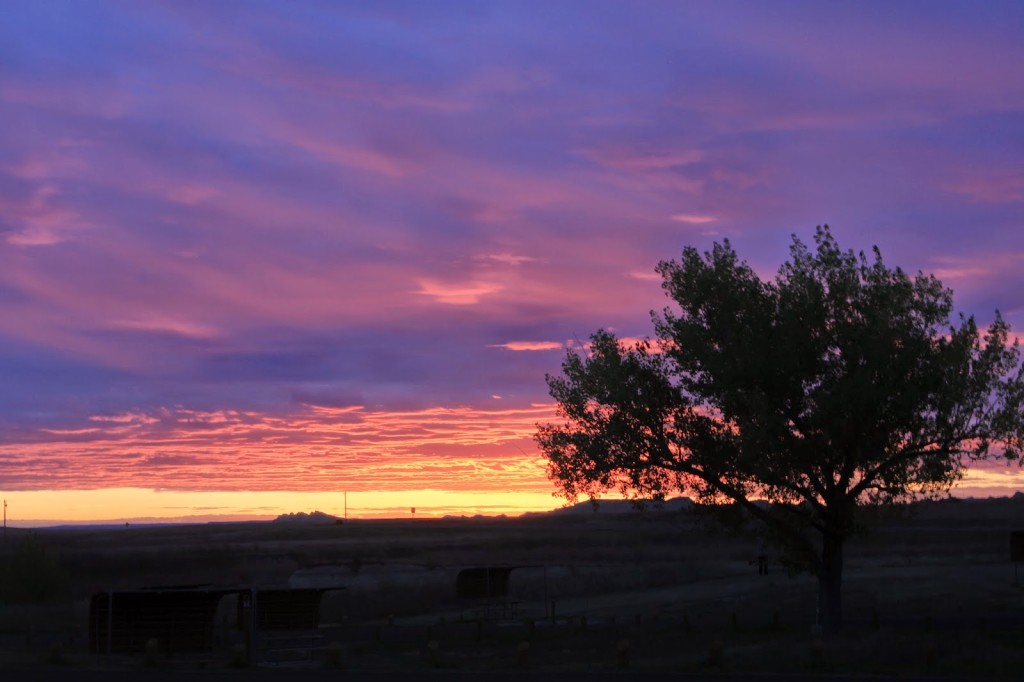 Once the paved road ended, most of the people turned around. We kept going, as we wanted to check out the more rustic Sage Creek campground. As we turned off the main road, we came upon a car and saw two people in the field just off the highway. The man was taking photos of the young woman and she was completely nude. She quickly dove down as he threw a wrap at her. By the time we were up to them, she was covered and they were running back to their car. It was such a funny occurrence but I have to say the location was perfect for some artsy porn. The light and wind was hitting the tall grass just perfectly and the rock wall formations above them would have made a fantastic background. I hope they got some good pics before we interrupted them. 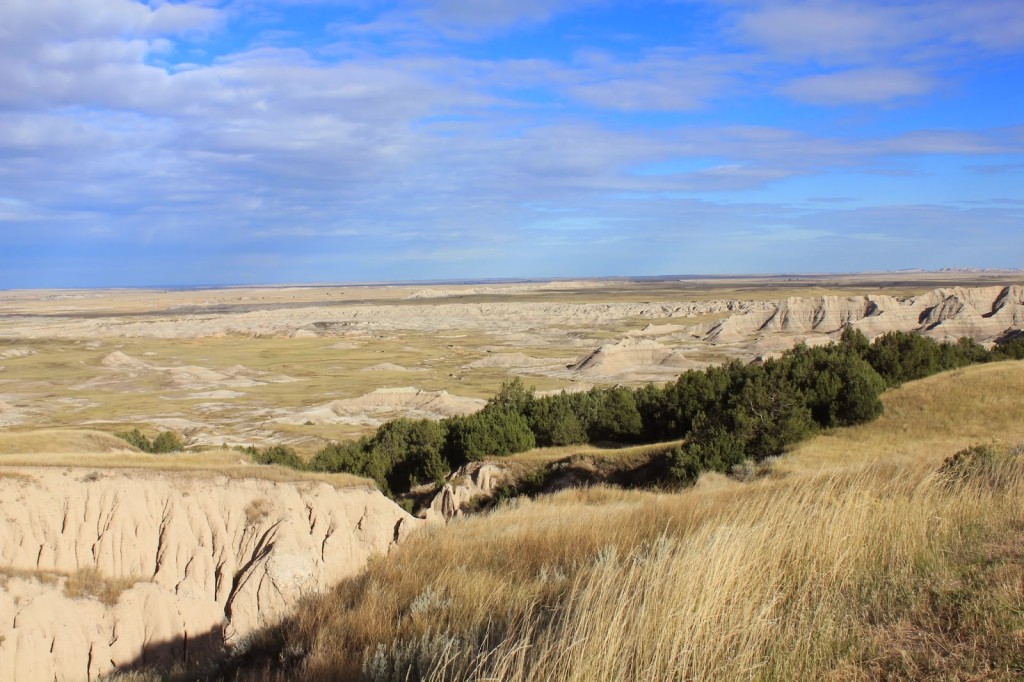 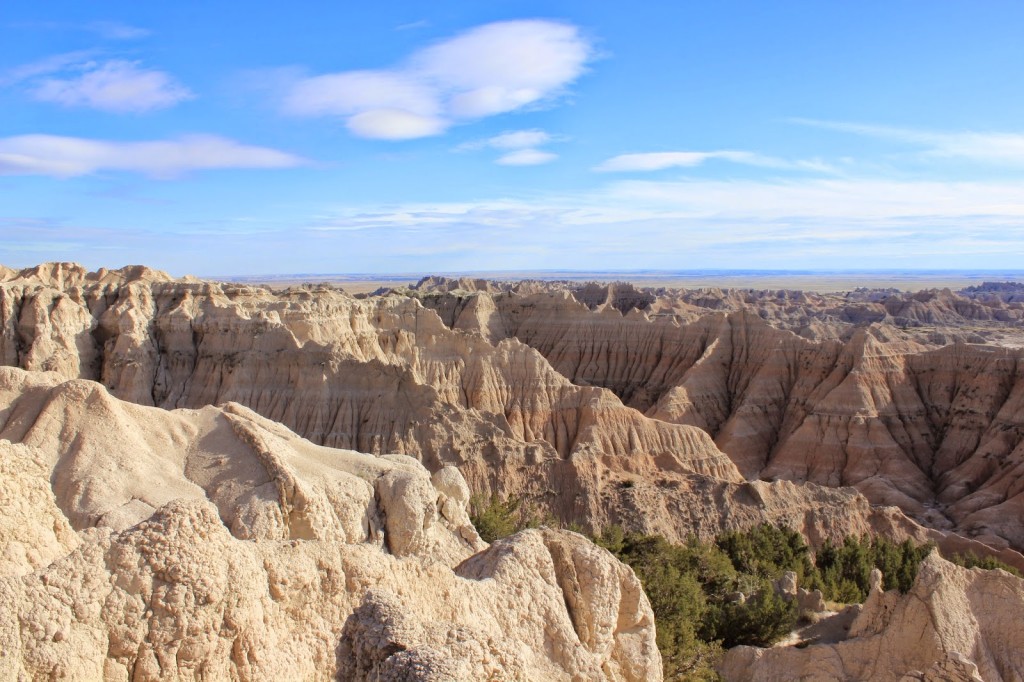 A bit further down the road we hit the campground, and it was fantastically surrounded by bison. They just wandered all over the campground. It was all tents there, with not even a van, but we could have got out trailer into a spot. It just would have been a pain to park there with Teddy. That boy just has no tact when it comes to keeping the wildlife at bay. 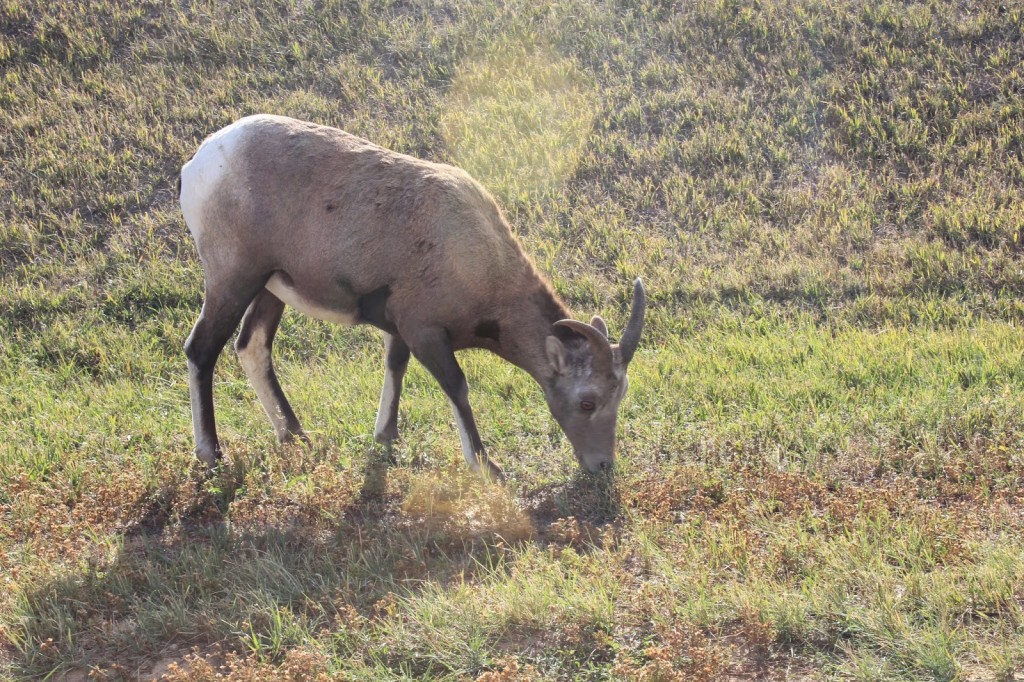 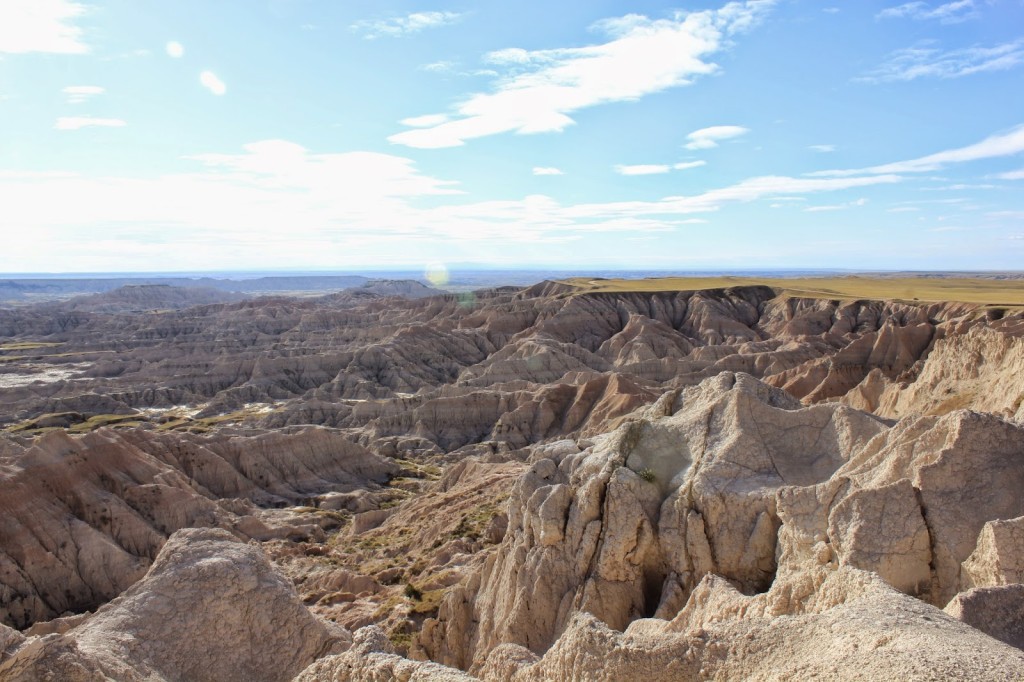