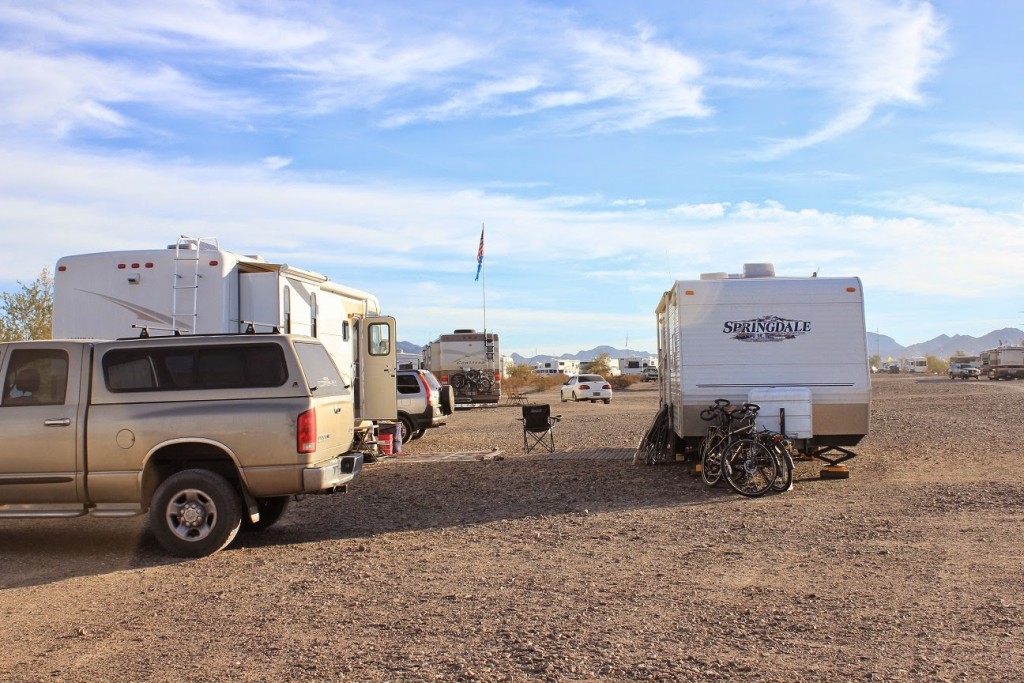 Quartzsite is a tiny little town in western Arizona 20 miles east of the Colorado river, the stateline to California. The first time we came through, last April, the place was deserted. It was out of season and unseasonably scorching hot. The time to come here is January when the RV show is on and the place is full of up to a million people, almost all in RVs. 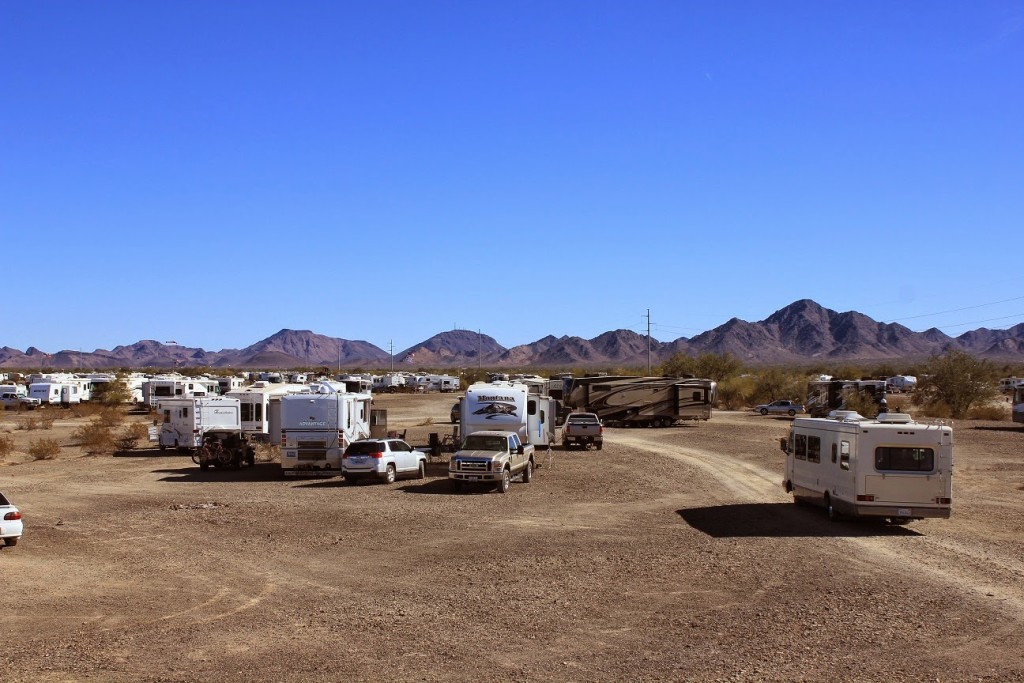 The town has a main street on the north side of the highway, where all the stores and restaurants are located. The south side of the highway is where the show takes place. Last April this road was completely empty. This time it was full of thousands and thousands of people and the traffic jams took a while to get through. 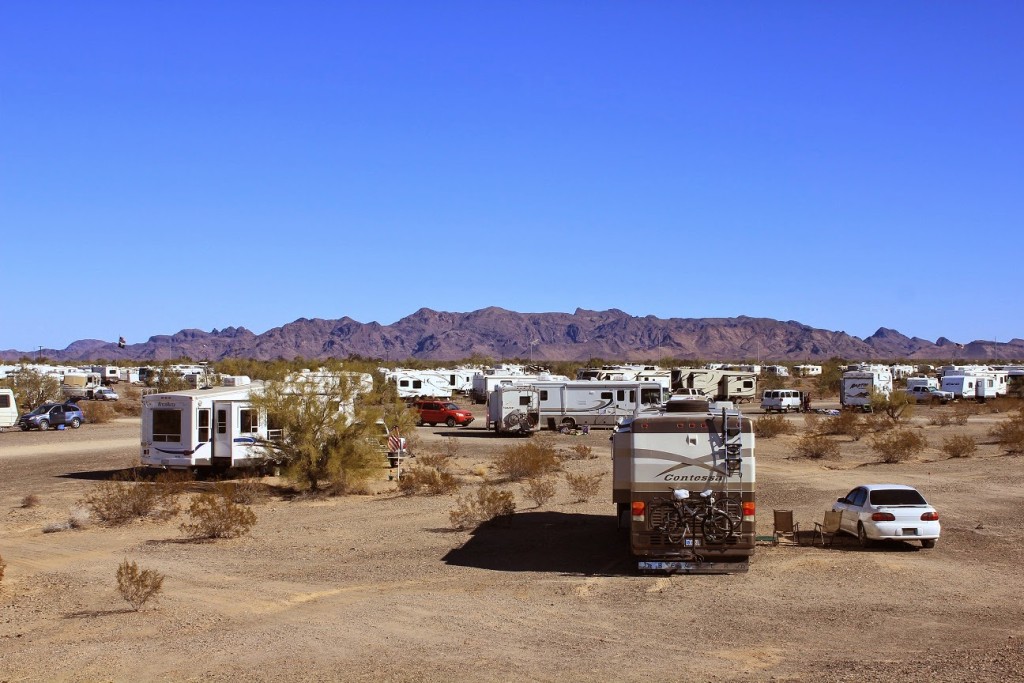 There are a number of RV parks in town, but most people choose to boondock on the BLM lands that surround the town on all four sides. The Bureau of Land Management (BLM) controls 250 million acres of public land, mostly in the west, where visitors can stay and play for no charge or a very nominal charge. 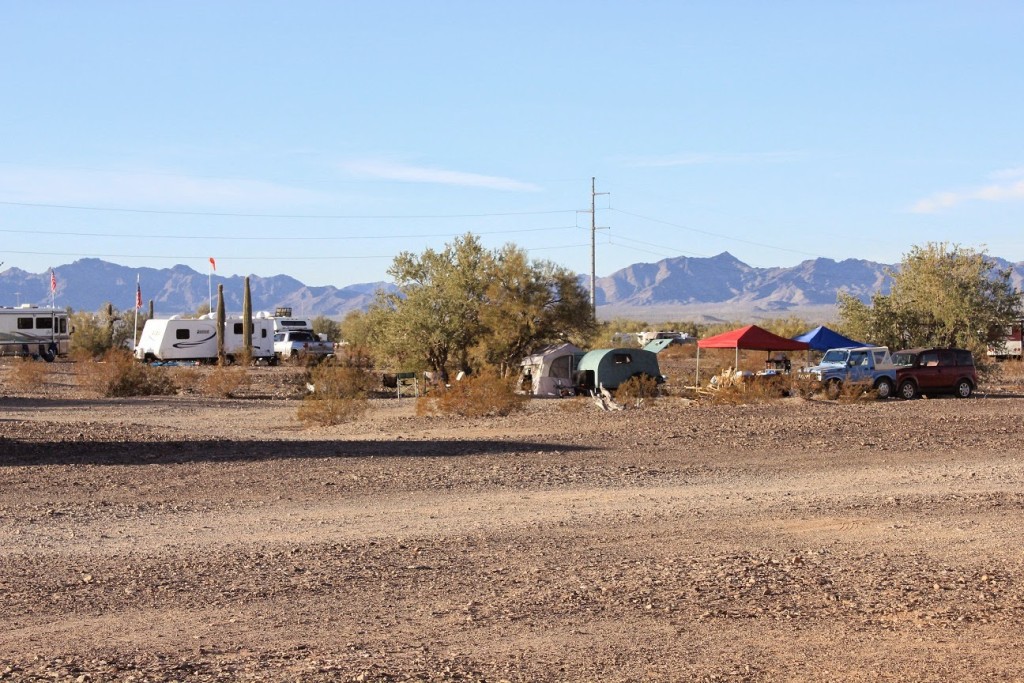 We chose to stay again at Scaddan Wash, on the east side of town. It’s close to the show area, and town, has great cell phone signals, and a ton of space to spread out in. We arrived a few days before the show started and staked out a good spot alongside a dry wash covered in scrub and trees. We could have gone out just a little further and been in a completely deserted area, but we enjoyed watching the goings on around us. We weren’t here for solitude. 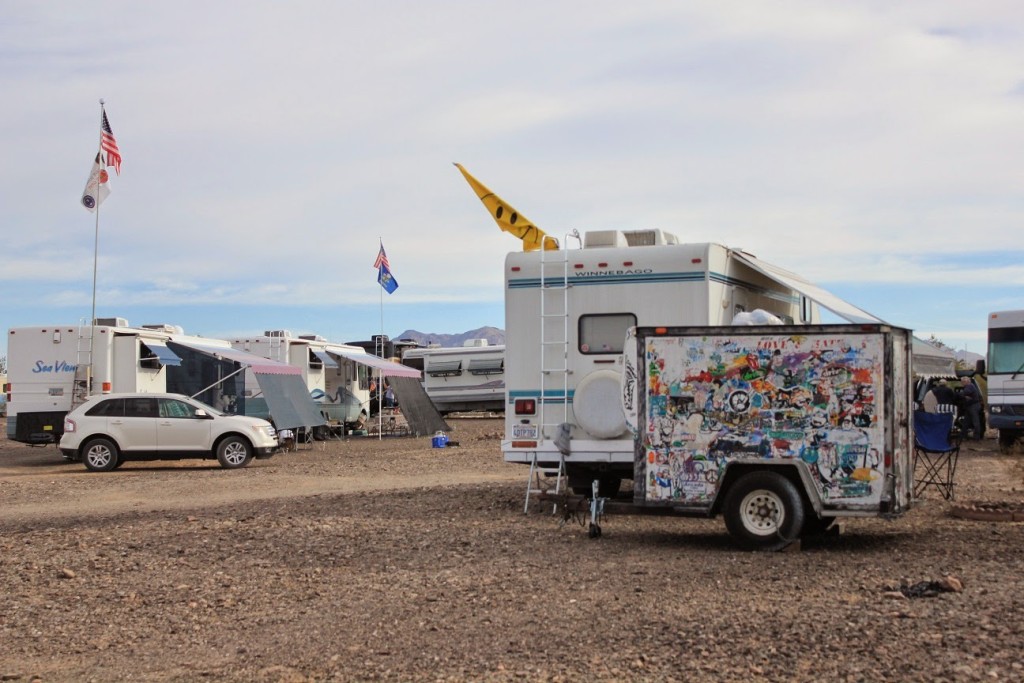 The area is dotted with many Saguaro cactus, all with their own style and personality. The ground is hard packed and makes for good hiking and cycling. It’s free to stay here, but has a 14 day limit and no amenities, other than a camphost. There is a recycling area by the city hall in town but no public garbage cans anywhere in town. Though the information states that they recycle glass, there was no place to put it, just a place for cans, paper and cardboard. 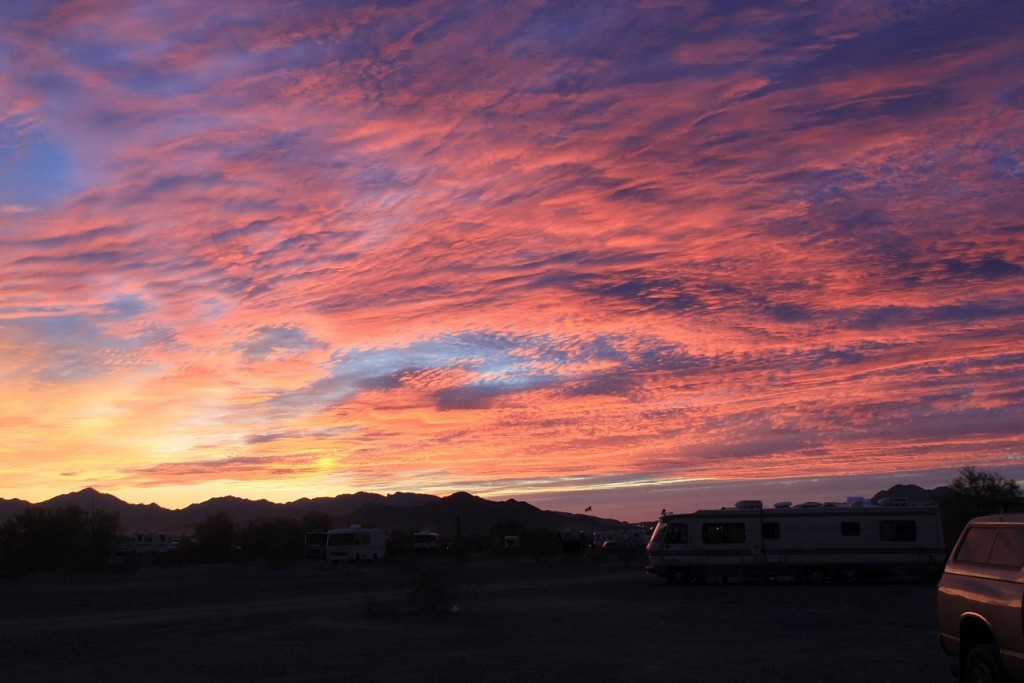 The groups of RVers range from singles to big groups arranged in a circle, with a central campfire, just like a wagon train. We were here alone with my parents. I think, in the future, it would be fun to meet up with a big group and be part of a wagon train circle. Most of the heads here are grey, and we’re on the lower side age-wise, but there are still many our age and even younger, especially on the weekends. 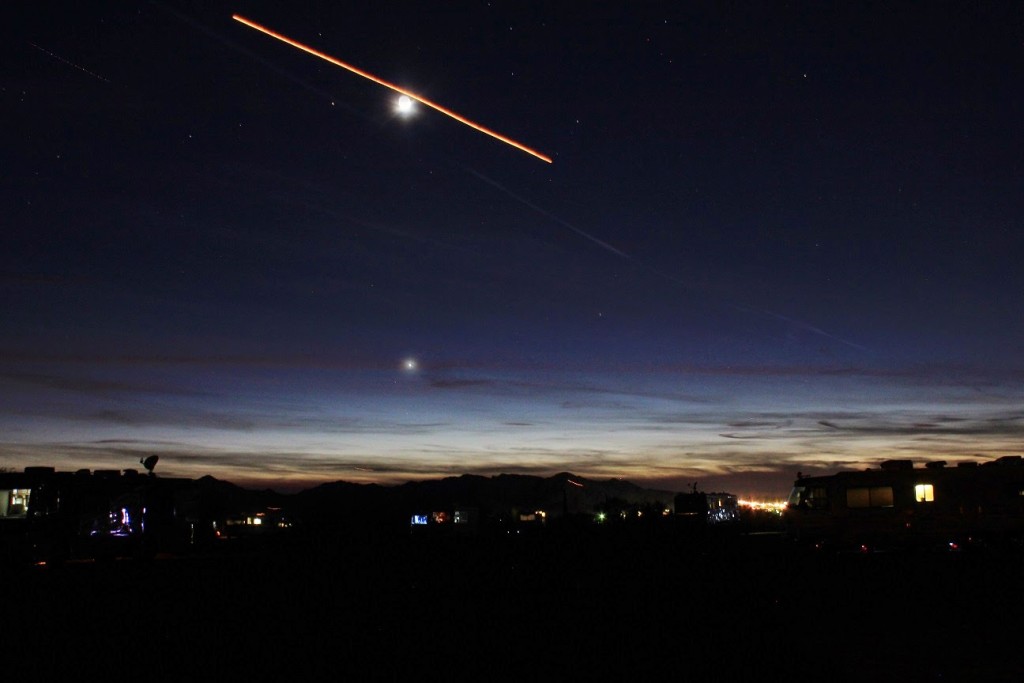 The weather was perfect, in the 70’s, with gorgeous blue skies during the day and dark black skies covered with a billion stars at night. Every night the sky was lit up with paper lanterns released into the sky by different RVers. It’s a beautiful sight, but I can’t help wondering if there is any danger to wildlife from whatever doesn’t burn up and lands on the desert floor. On the weekends the sky was alight with fireworks, none of them official, in small bursts from different camps. 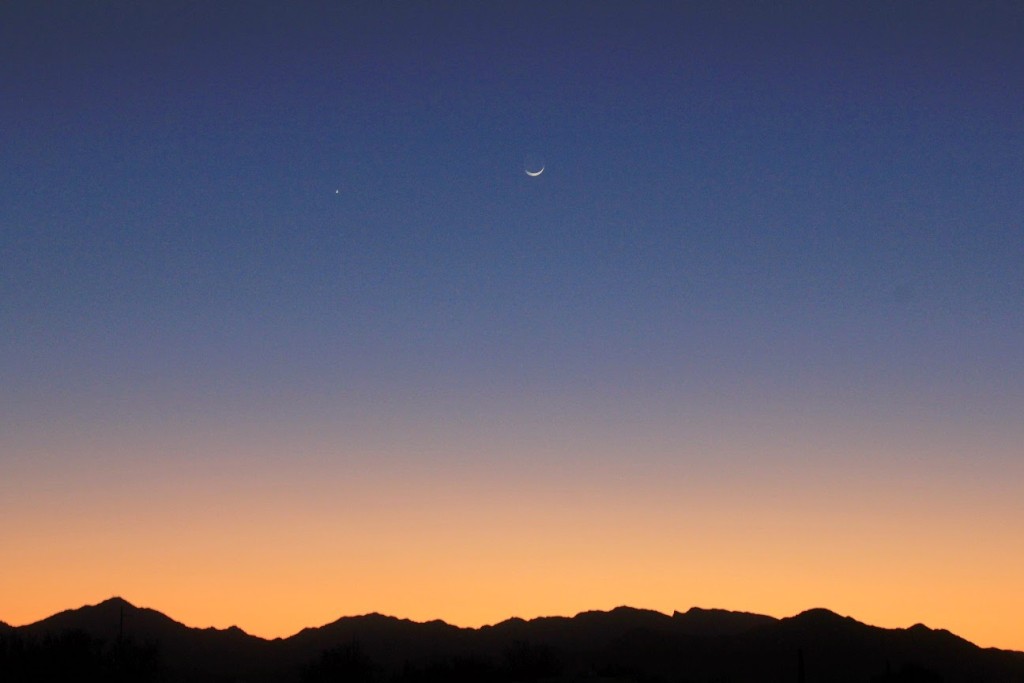 The first night we tried out my parents ‘fire in a can’. It’s a tubular metal can that holds a presto log or piece of firewood straight up as it burns. It’s nice to have the fire up higher where it doesn’t just burn our knees and leave the rest of us cold. The presto log lasted all night, so it was nice and easy.

The next night we brought out our propane fire and it’s even easier. Just hook it to the propane, and light. When you’re done, you turn it off. Nice and simple. We estimate it cost us about $2 per night to run. We used that for our fire the rest of the week, Best part was we didn’t end up smelling like campfire and didn’t have to move out of the smoke as the wind changed. 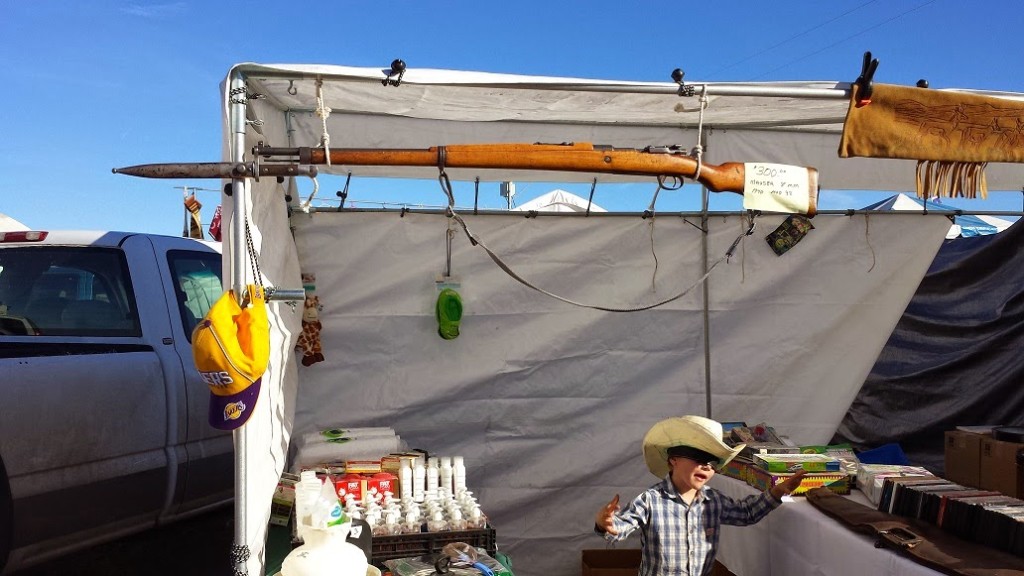 The RV show area is made up of a main tent, surrounded by a ton of other sales booths outside. They sell a huge array of things that you would find at a fair, plus many that are of particular use to RVers. The first day we visited the main tent and didn’t buy a thing. We just collected free items and info.

We came back a few times in the week and found lots of items to purchase, at very reasonable prices. Jewelry, infinity scarves, and beads were my main purchases. I was amused to discover the scarves smelled like pot when I put one on to wear later that night. Mental note: don’t wear any of them when we cross the border to Mexico. 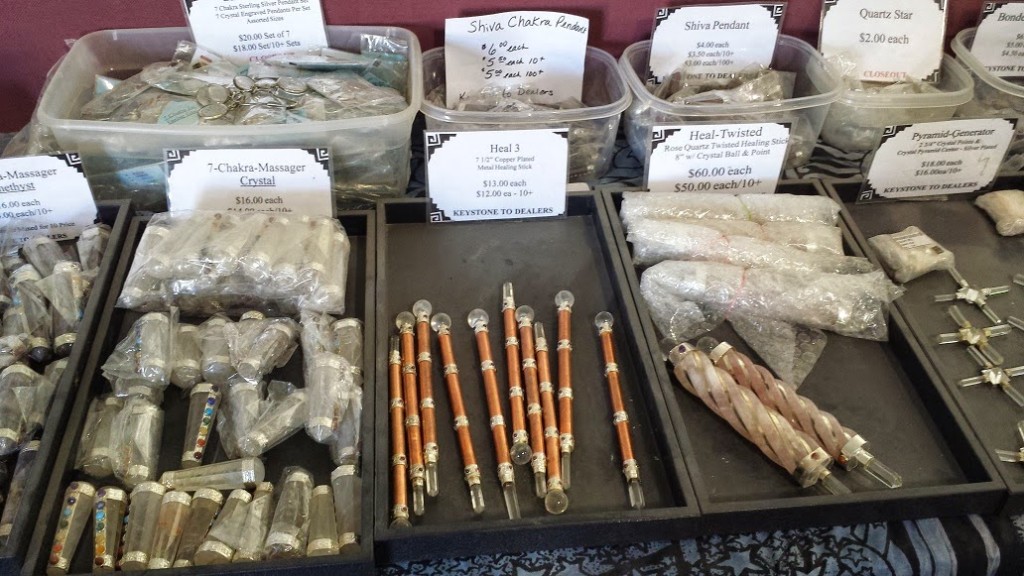 I tapped Harold with one of these healing sticks and he was miraculously healed of all maladies.
“But I had no maladies before!” he cried.
“Shhhh honey, you’re ruining the spiel.”

There were three meetups we were planning to go to, but we ended up only making it to the first one, organized by Chris and Cherie of Technomadia. They are a couple who have been fulltime RVing for almost nine years and give so much help and info to people on their web sites. It took place at Beer Belly’s, an outdoor bar at the RV show. We had a great time there meeting them and the other RVers who showed up. There was a band playing, the sun was shining, and the drinks were both good and cheap, my favourite combination.

My new favorite drink I discovered from the NuRVers facebook group was a big hit with all of us. 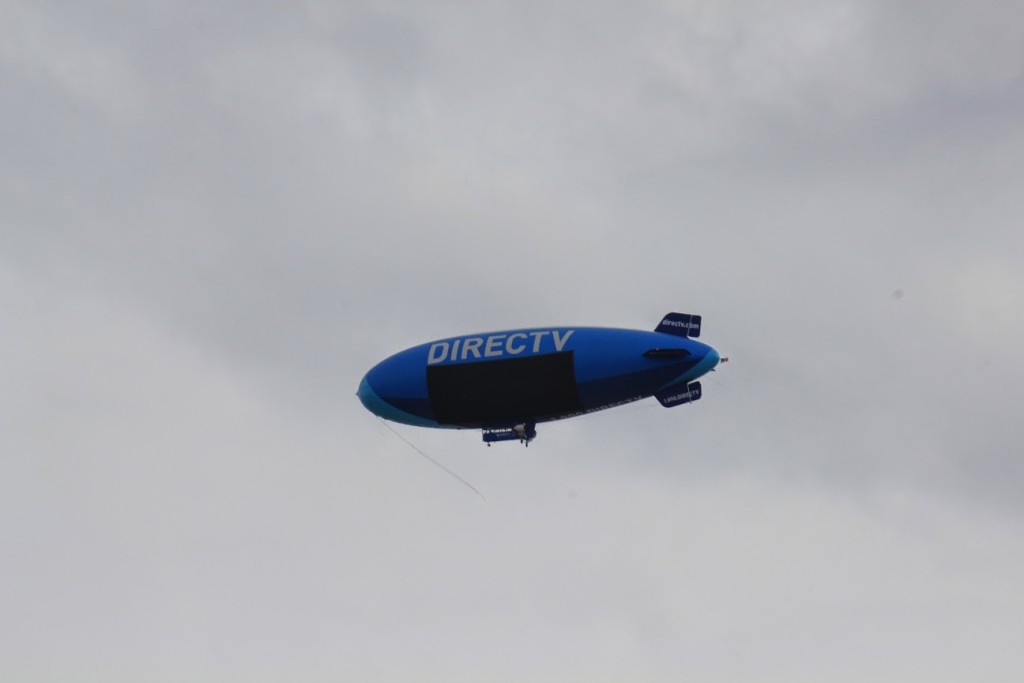 Overnight spot: Scaddan Wash
Price: $0.00 No hookups 14-day limit
Includes: Nothing
Dump: There are a number of pay options available in town, but if you come or go through Blythe, CA, they have a free city sanidump just for RVers.
Water: Miller Park in Blythe has 3 potable water spouts for RVers. Alternatively, there are quite a few pay water kiosks in Quartzsite.
Garbage: We took our garbage to the city park each day.
Recycling: Over by the police station and city hall is a recycling center for cans, paper, and cardboard in town, but not glass.
Cell & Wifi: Verizon – 3 bars of 4G LTE. Some times it got very slow, but this was at predictable times when lots of people were online. Usually 9-11pm was unusable, but it was better at other times.