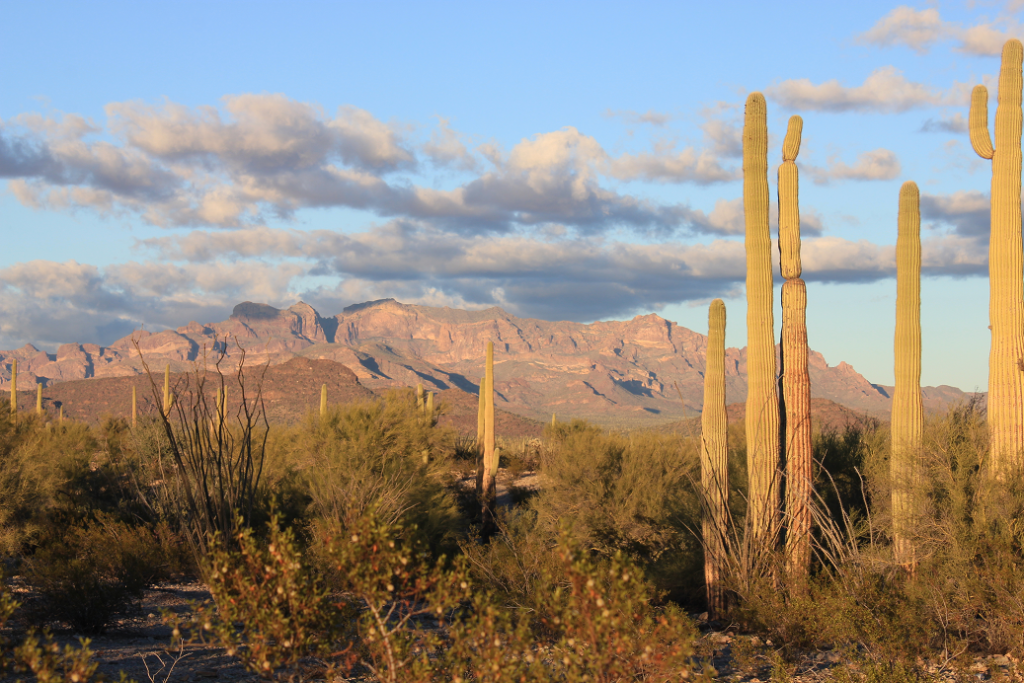 We’ve been to Mexico many times by air and cruise ship and day trips into border towns, but never driving through the countryside. You hear all sorts of stories about the danger down there from gangs and other criminals and it’s hard to distinguish between hype and healthy fears. A lot of RVers who decide to do different parts of Mexico will only do so with an armed caravan tour, but they are very expensive and not at all our style. 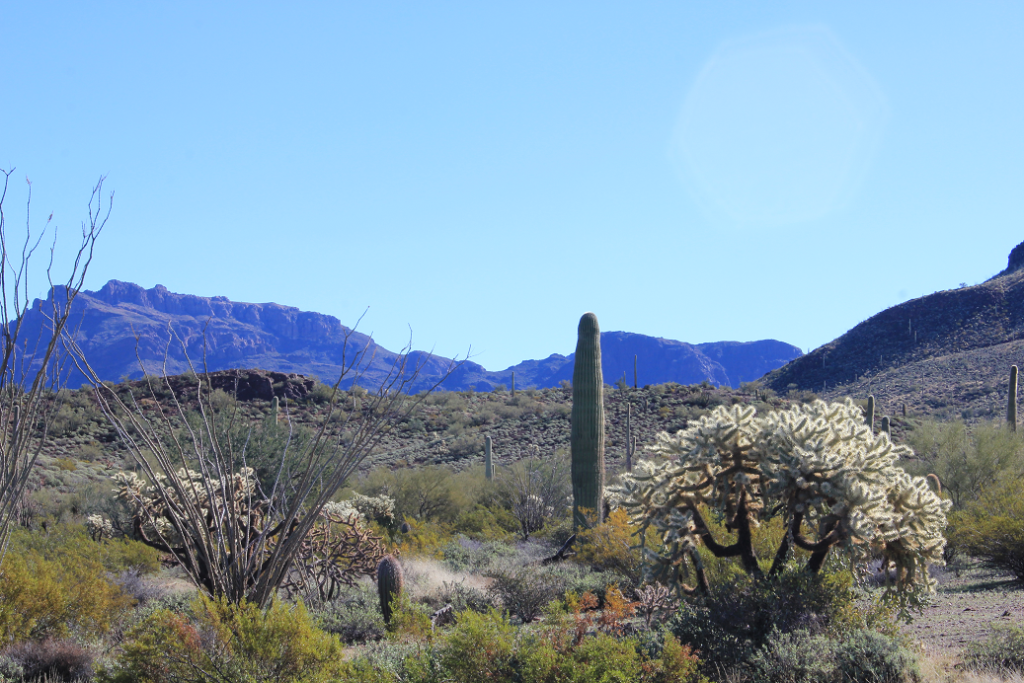 Recently I had been reading blogs from RVers who drove down to Puerto Peñasco on the coast of the Gulf of California. It’s only an hour and a half drive from Why, AZ, it’s well used by American RVers, cheap, and purported to be fairly safe. I read over and over about how you’re 17 times more likely to experience crime in Flint, Michigan, but I can’t find where those stats came from. We figured, for our first foray down there, we’d be best off just driving down and leaving the trailer back in the states. 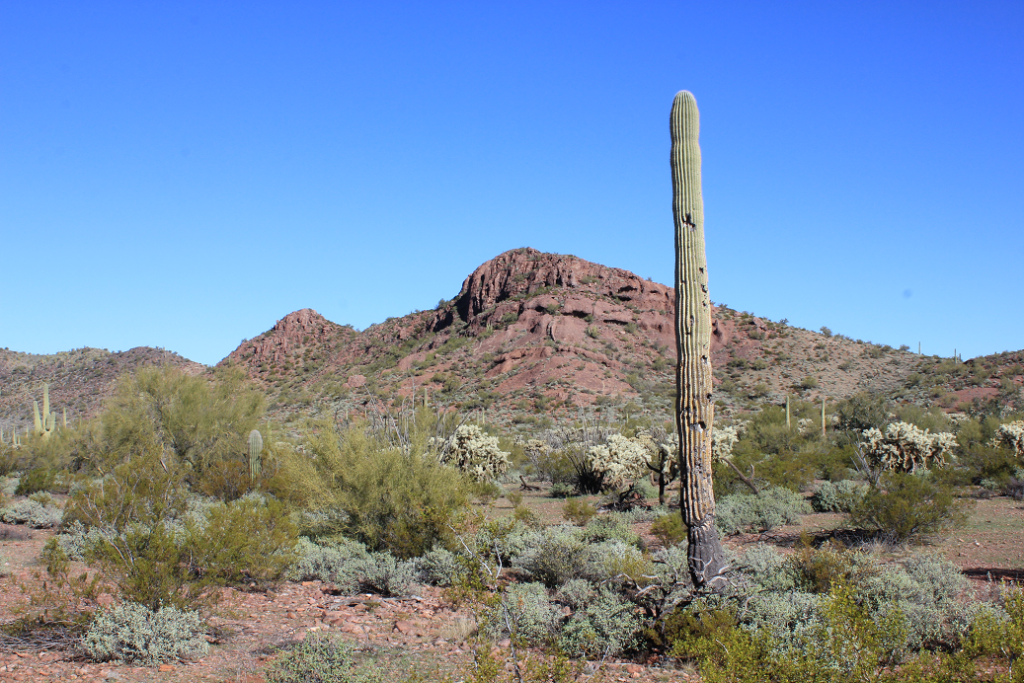 Mexico doesn’t allow out of country insurance coverage. The insurance companies in Canada and the US just resell policies from Mexican companies. I read that if we are to get in an accident, we probably shouldn’t get police involved and expect to use our insurance. It’s more to protect the Mexicans from us. I don’t know the truth of this, but I do know I’ve read a lot about not ever getting involved with the police for any reason. 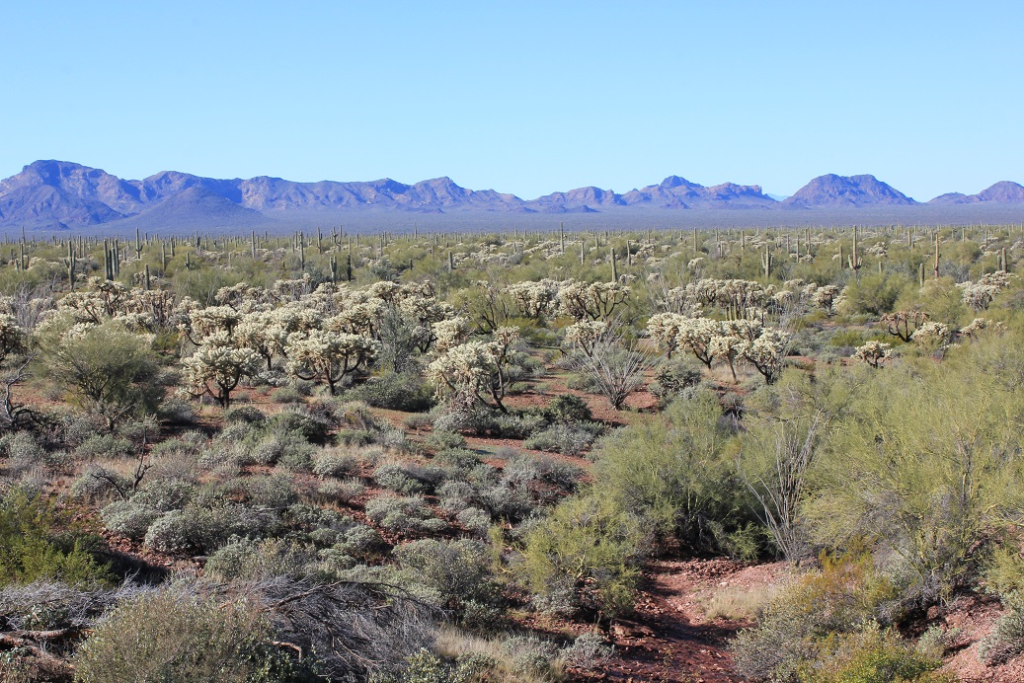 Pretty much every business in Ajo sells the car insurance you need to have to drive in Mexico. We stopped in to buy some the day before, which cost us $30 for one day. I checked AAA and they charge the same amount. By the day is the big rip-off. You can get six months for just under $300 and a year for just over $300. 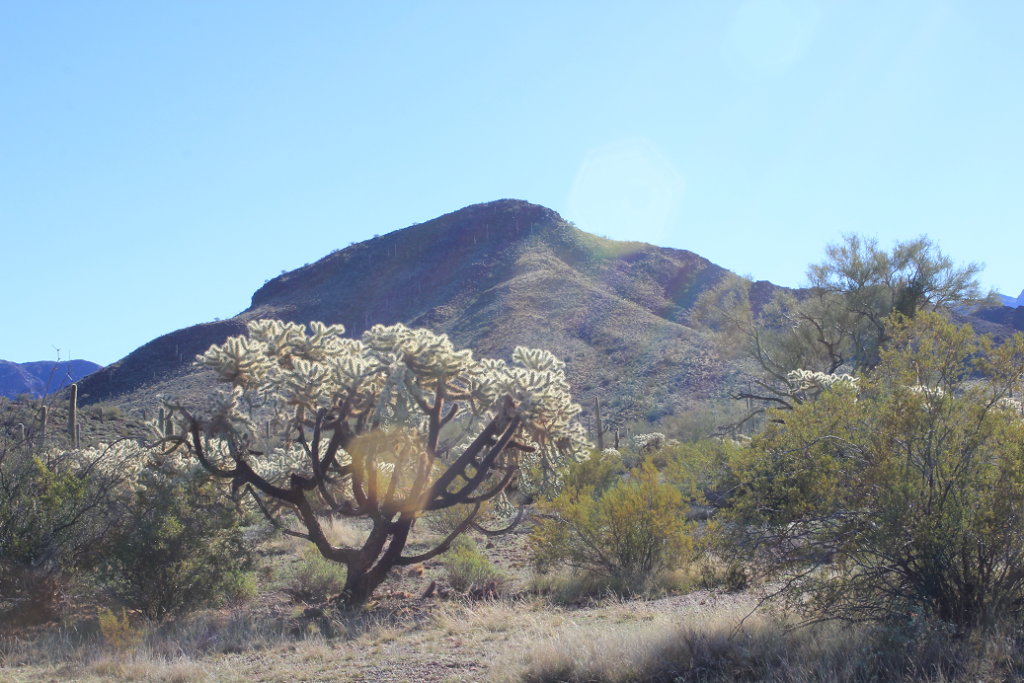 We left right after breakfast, about 9 am. I’ve read that the drive through the desert down to Organ Pipe National Monument is beautiful but it was even more amazing due to the recent rains. Everything was so vibrantly green, and we found ourselves stopping every few minutes to take more pictures. Eventually, we had to call a halt to stopping or we worried we’d never make it to our destination. 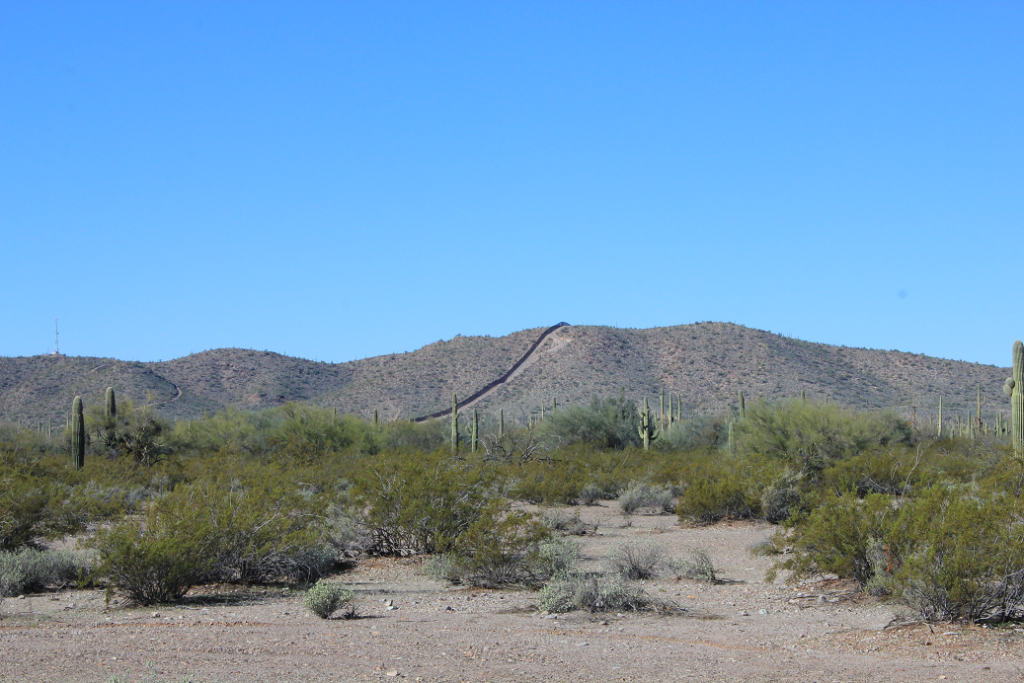 Miles before you hit the border, you can see the wall running along the mountains. It looks so imposing, and so overbearing. It made us both feel a sadness and fear, hard to describe. It’s so official, and so mean, and so ‘we don’t want you here’. It made Harold feel angry and it made me feel my white privilege.

As we drove up to the border, the only being to slow us down was a coyote standing in the middle of the road looking south. We laughed at the obvious jokes we could make about Mexican coyotes and borders, while I frantically pulled out my cell phone to get a photo of him before he ran away. Nobody at all had any questions for us. We just pulled through and were on our way into Mexico. 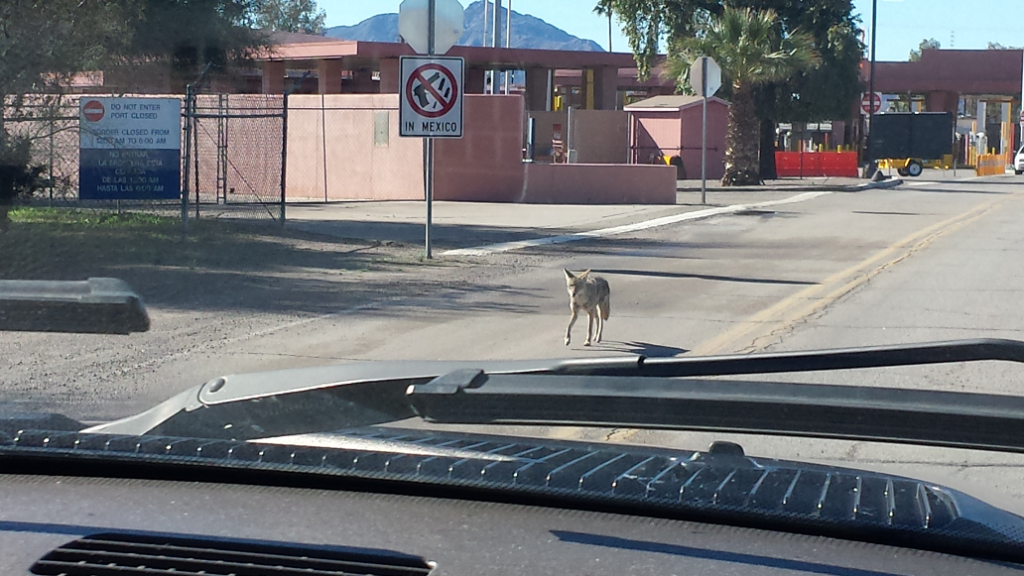 It felt different right away, after we crossed. There are lots of places in the American Southwest that feel very poor, dirty, and unmaintained, but it’s always worse in Mexico. The effects of the storm that had hammered at us in Why, were still showing here, with large ponds in the mud streets and lakes in the lots along the road. As we drove through the town of Sonoyta, we didn’t see any women or children, just groups of men. It was rather intimidating, especially when we got to the far end of town, where there was a large arch and stop signs both ways with men standing there holding buckets, demanding money for the mentally handicapped school. I have no idea if the charity is real or not. We threw a few bucks into the bucket and were on our way. 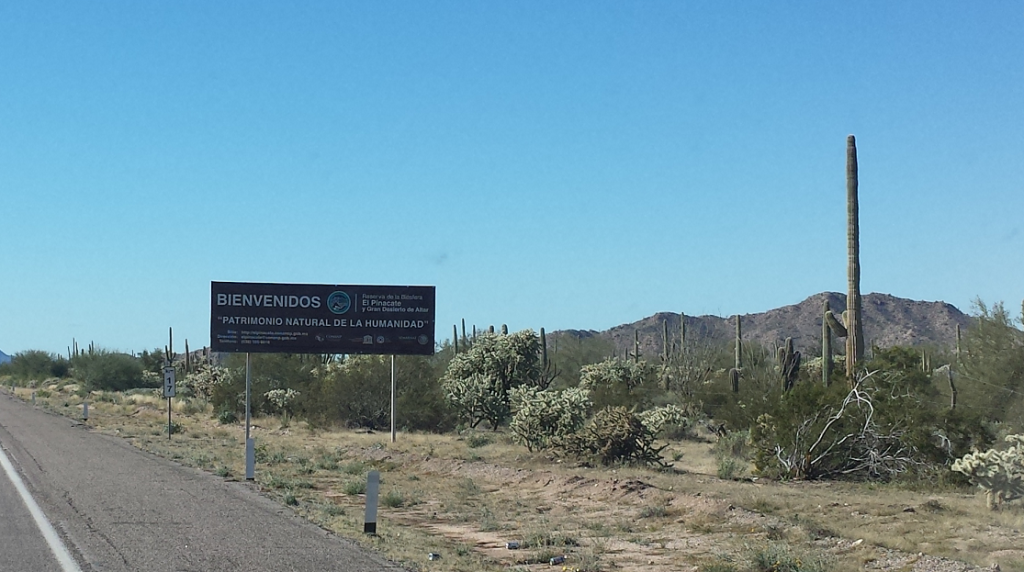 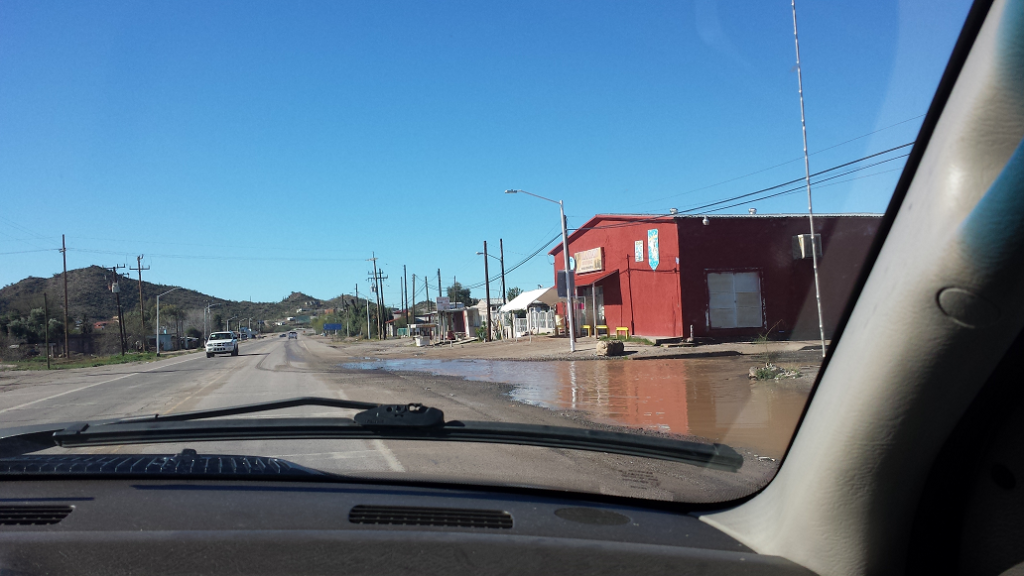 Once we were out in the countryside, we felt more comfortable. The scenery was desert, more barren and not as pretty as the US side. Every single sign had bullet holes in it. I pointed them out to Harold, mentioning my unease, but he shugged it off  “We see the same stuff in Arkansas.” Yeah, okay, maybe so, but not 8-10 holes in Every! Single! Sign! 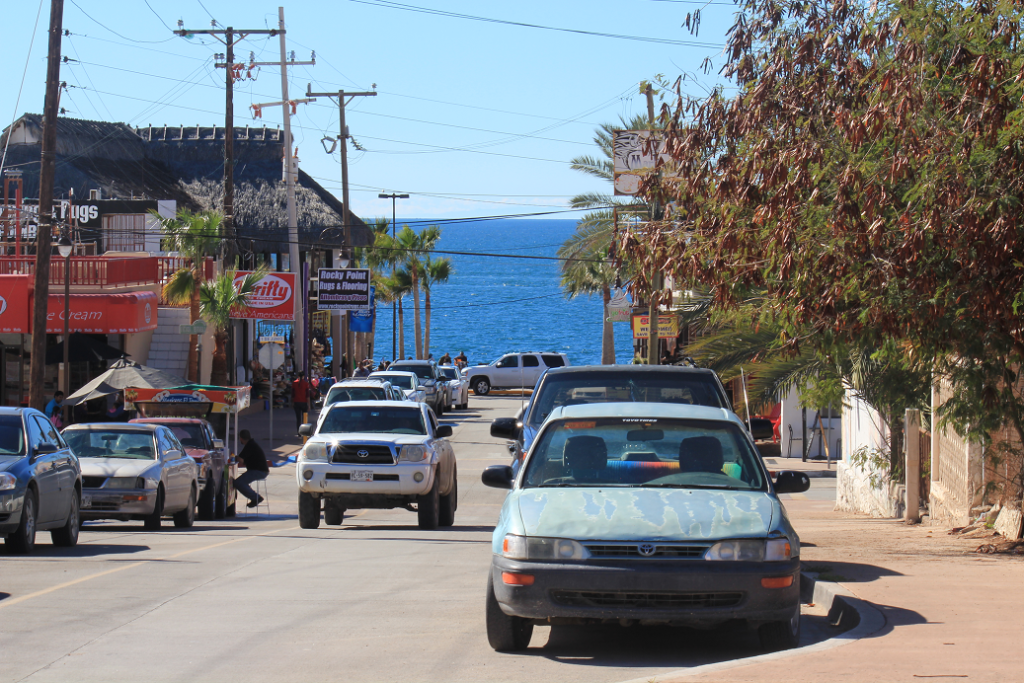 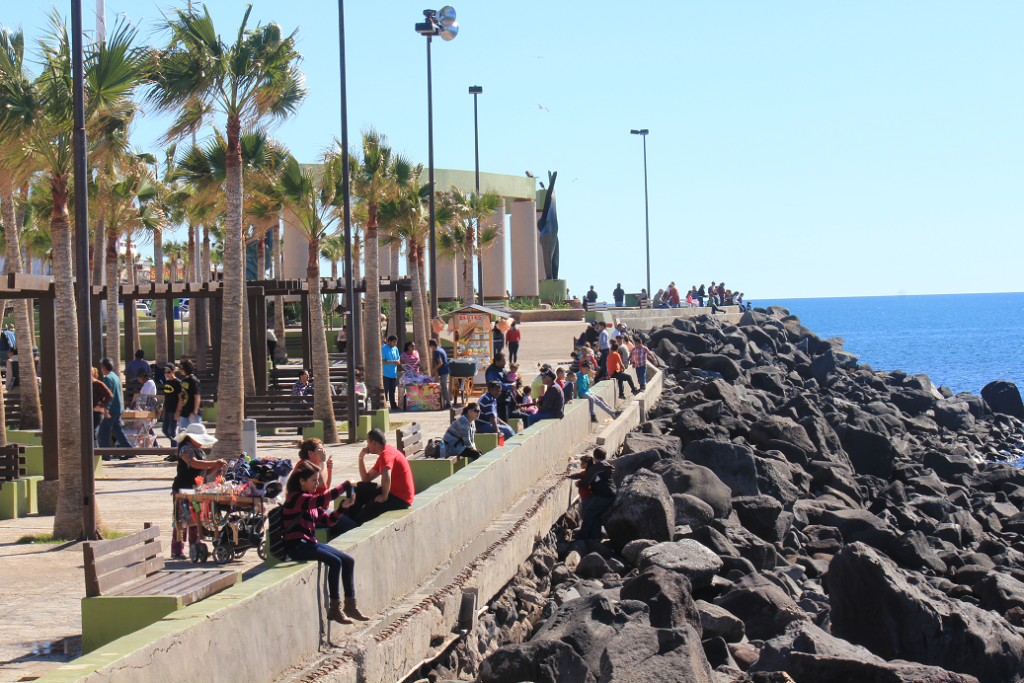 At every sign of habitation along the highway, the speed limit went way down to 25 mph, even when the place was all boarded up or all cleared out. We were pretty much the only people obeying the speed limit changes, but we hear so many stories about the danger of coming in contact with Mexican police. Better to be safe than sorry, we figure. 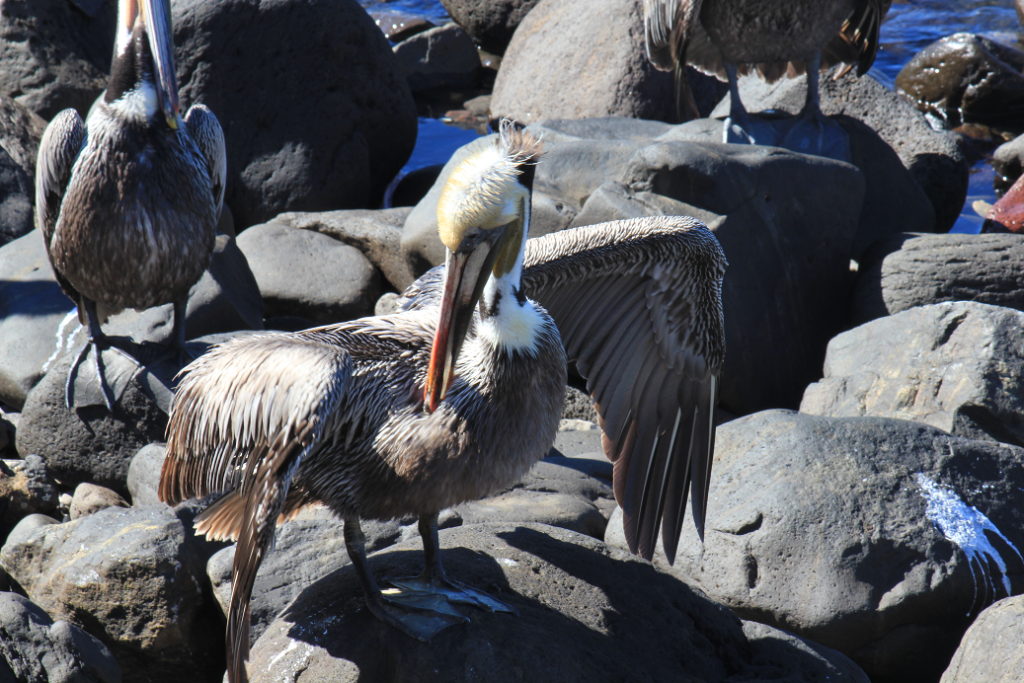 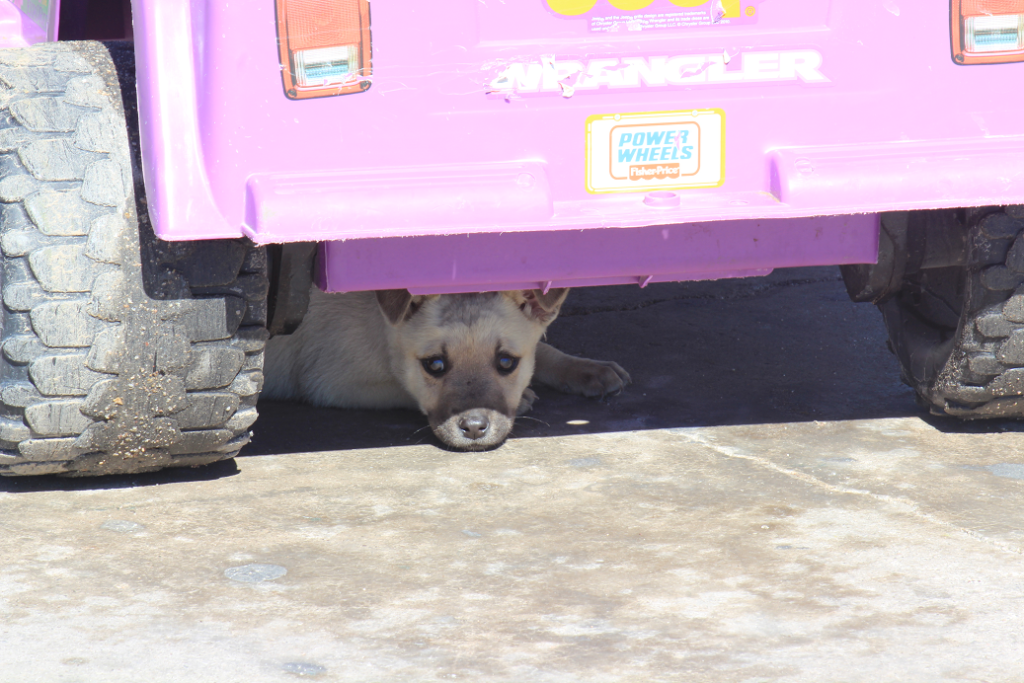 I had been refusing to call the town we were headed to, by it’s English name, Rocky Point, believing that it had probably been renamed by Americans who didn’t want to use it’s Mexican name. It came as quite a surprise for me to discover the area had first been known as Rocky Point, identified and named by a retired British Royal Navy Lt. and much later was renamed Puerto Peñasco by the Mexicans. It’s nicknamed “Arizona’s beach” as it is the closest coast to Arizona and many Arizonans vacation there. 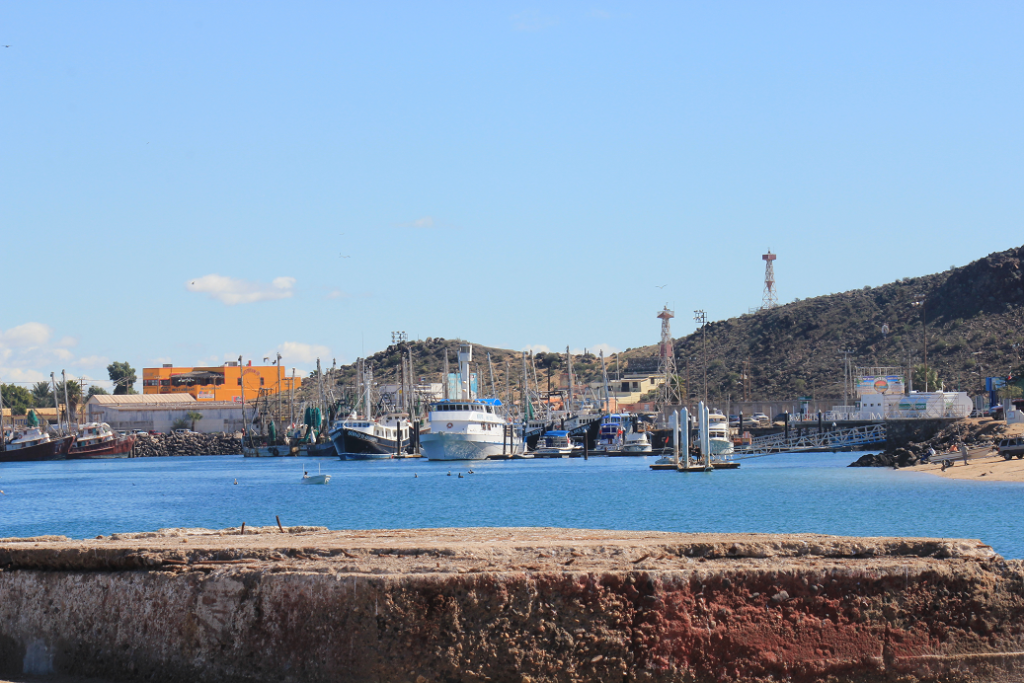 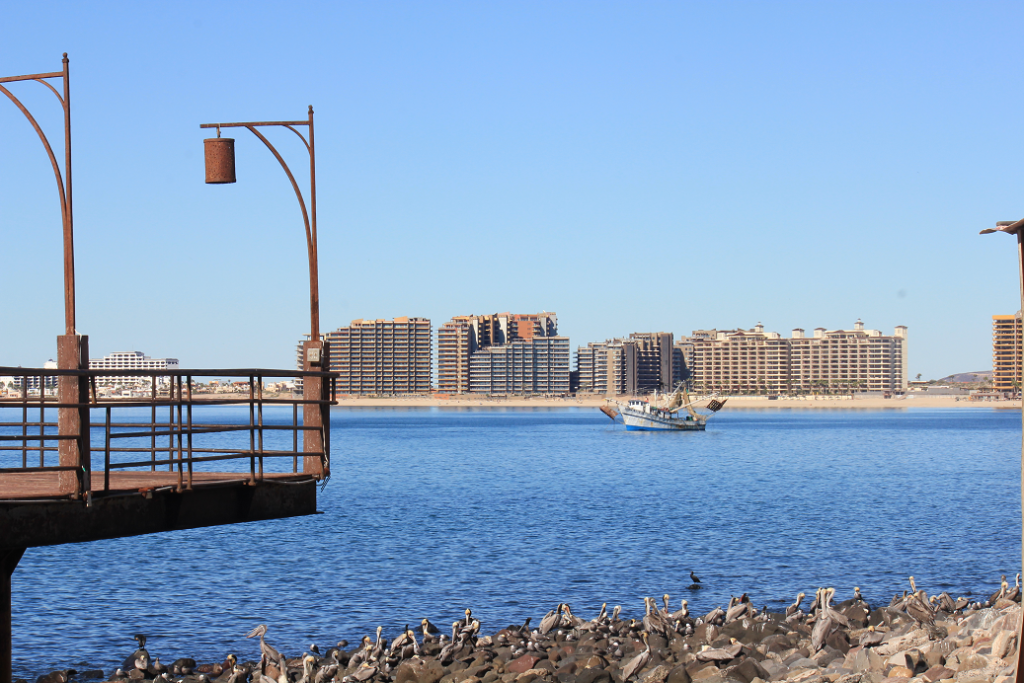 During prohibition, Al Capone used Puerto Peñasco as his liquor transfer point. He put in a landing strip, the first well, and the “Posada La Roca”, a hotel that is still standing in the fish market area. They sold liquor to the tourists who would drive down from the states. For most of it’s history, the town was a fishing village, but since the 1990’s, the area has been developed more for tourism, visited by many people from the US and Canada. 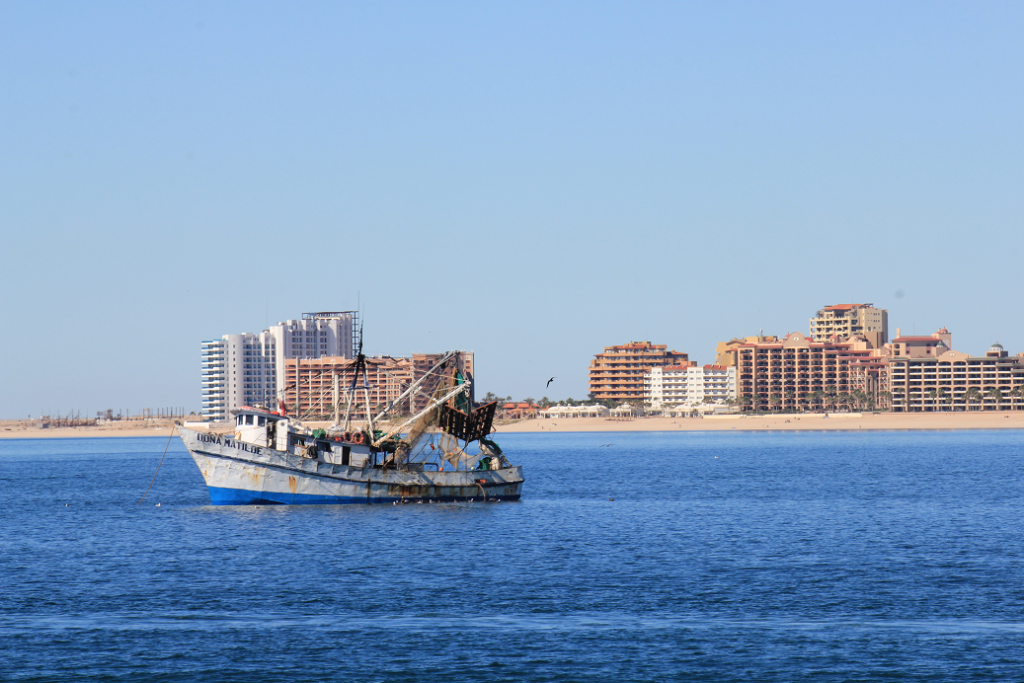 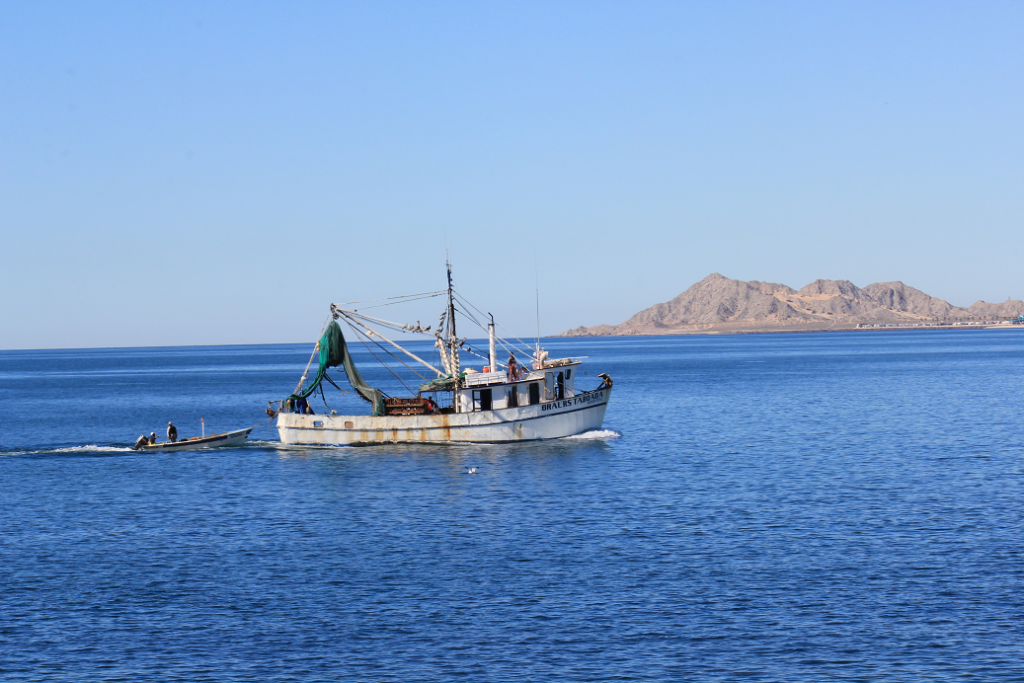 We first drove to the Fish Market, an area full of restaurants, souvenir and fish shops along the waterfront. The seafood they sell here is huge, with shrimp the size of an adult hand. We chose one of the pricier restaurants (still cheap in contrast to what we’d pay at home, of course) for our lunch because it had the absolute best location, right out at the end of a pier with a covered deck surrounded by water on three sides. It was so surreal to sit out there, with the sun warming our skin, watching the fishing boats in the gulf, while drinking huge margaritas and eating ceviche, guacamole, and tortilla chips. 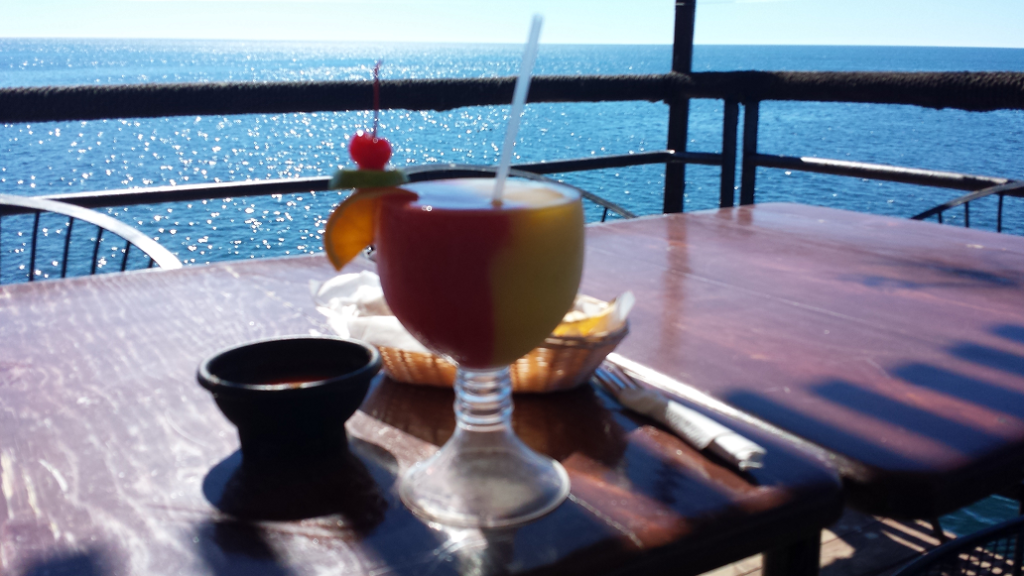 After lunch we wandered the town. We were definitely targeted by the merchants, probably due to being the only obvious tourists in the area – this was Superbowl Sunday, after all – but it was nowhere near what we experience in border towns. They just call out and leave you alone when you smile, respond and move on. We walked along the waterfront, enjoying ourselves amongst the large Hispanic families out for the day. It felt very safe and friendly there. 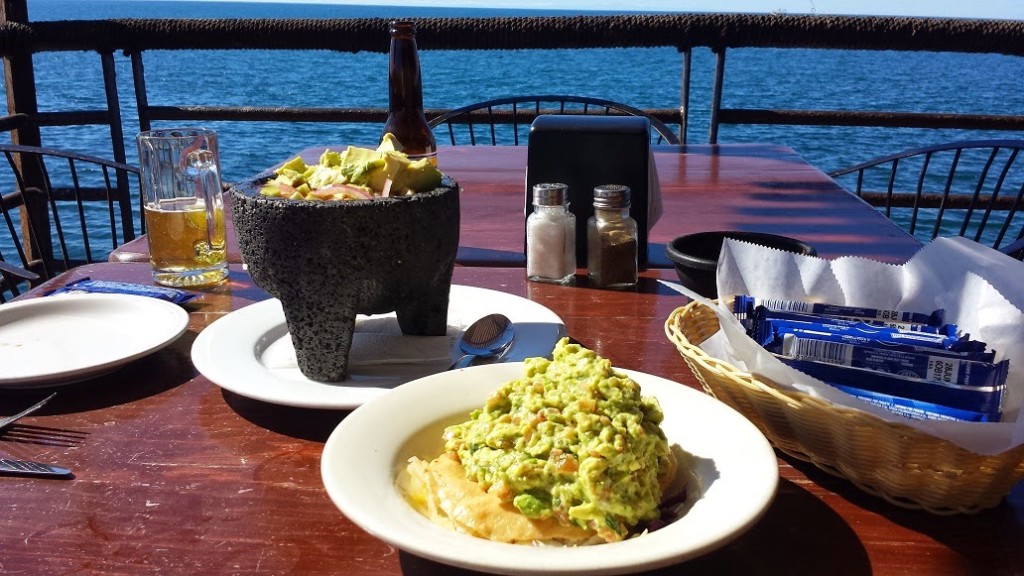 We could see across the bay, a very long sandy beach with RVs, and hotels all along it. This area is appropriately called Sandy Beach. We got back in the truck and drove over there. Our plan was to check out the RV parks for the next time we come down and spend more than a day here. 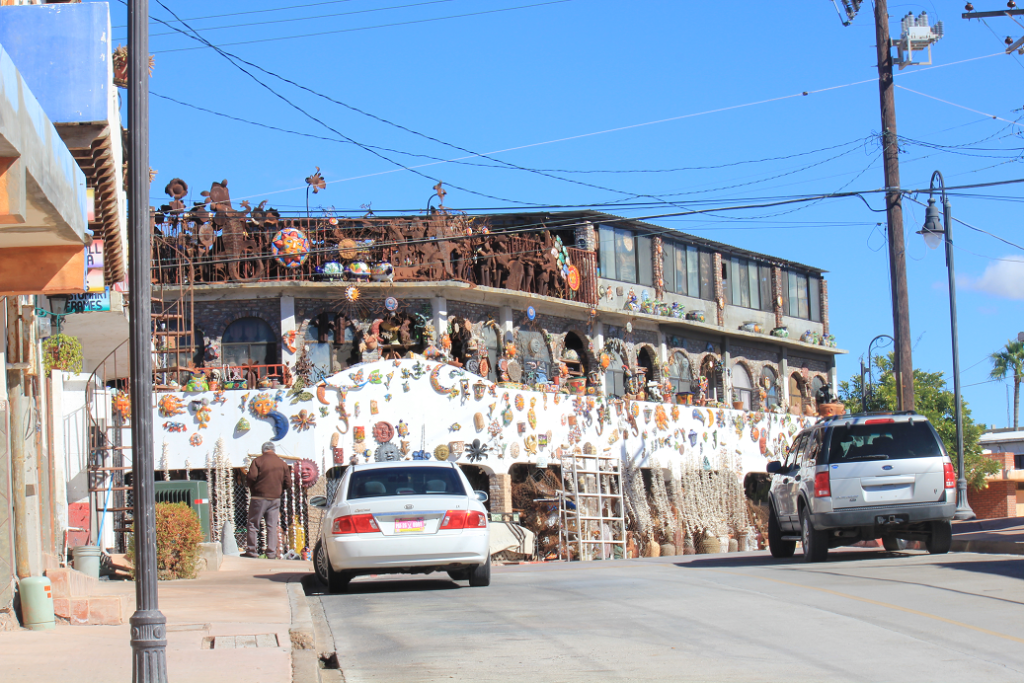 We found four of them and the first one was our favourite, not only because it was the cheapest, but because you can camp right on the beach. The other ones are up on cement, and further back. 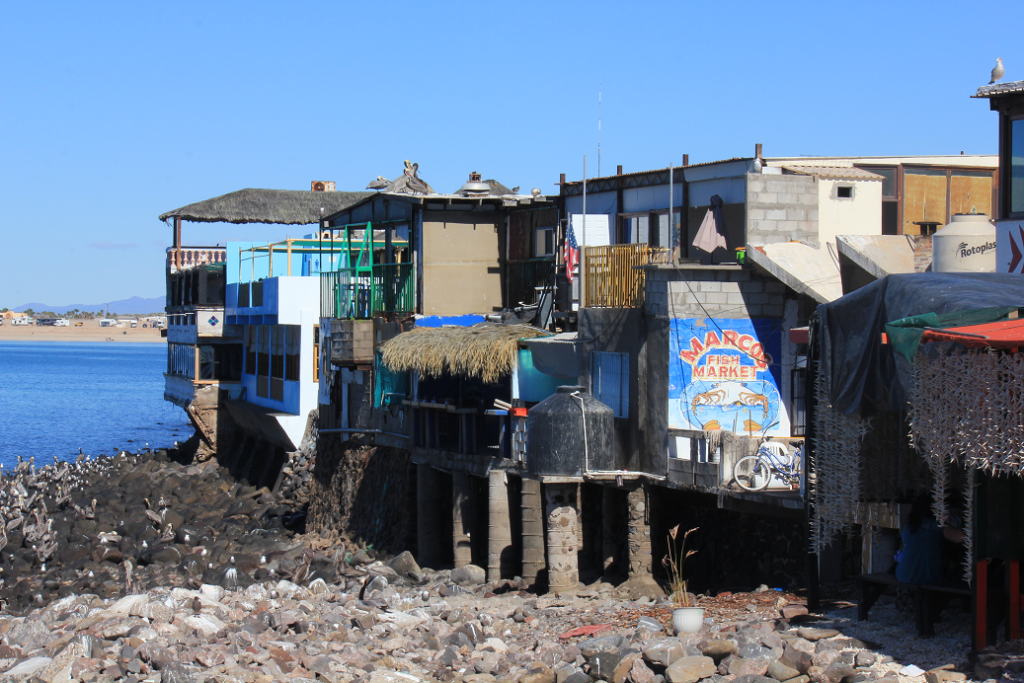 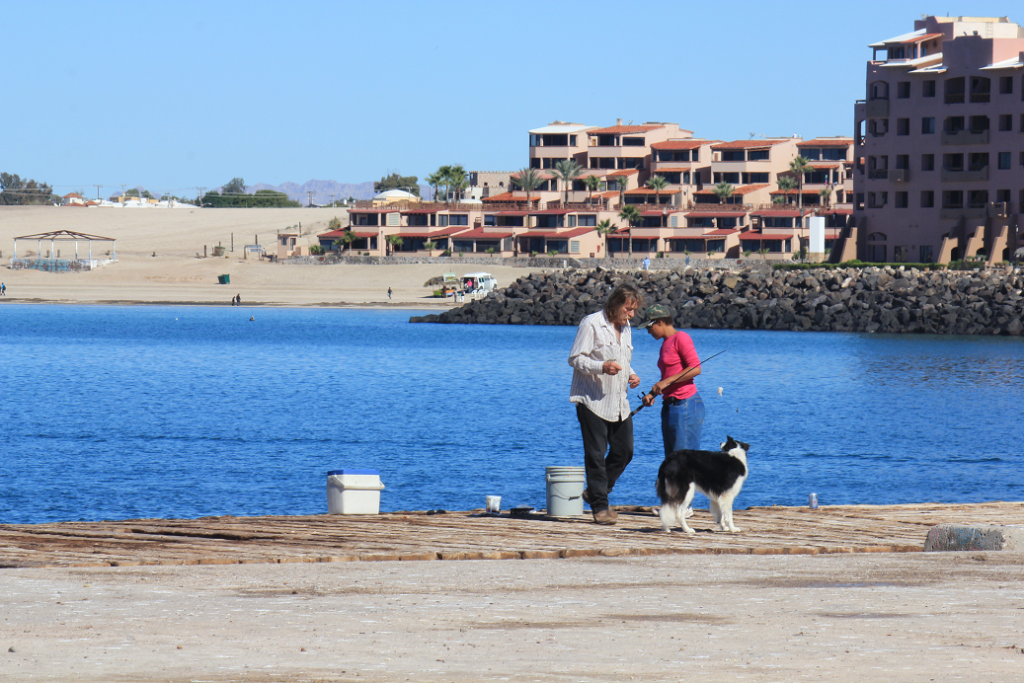 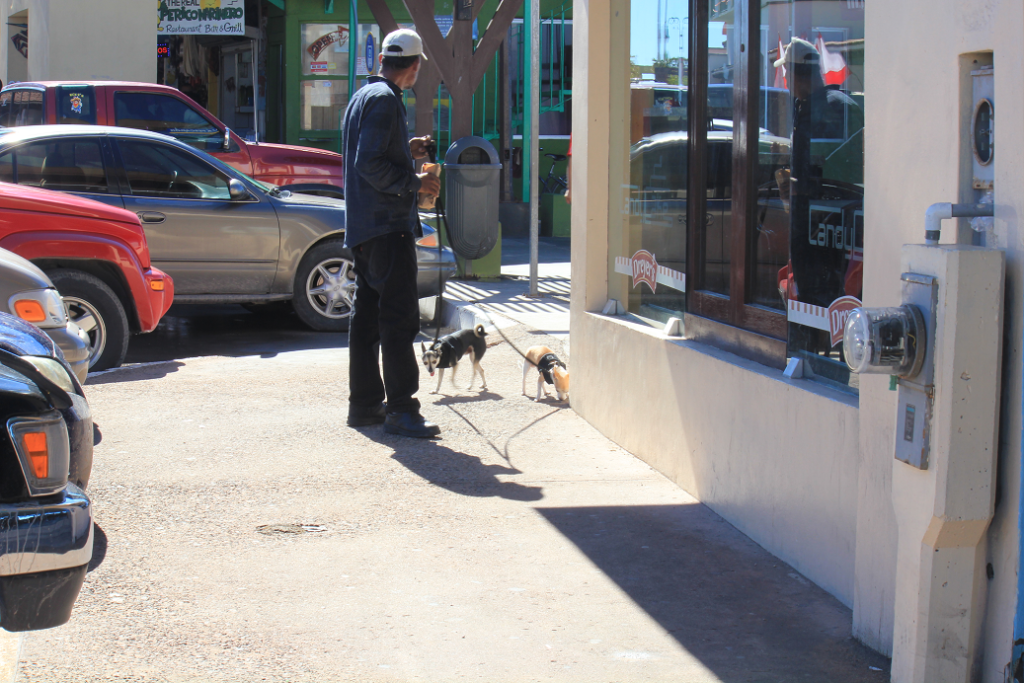 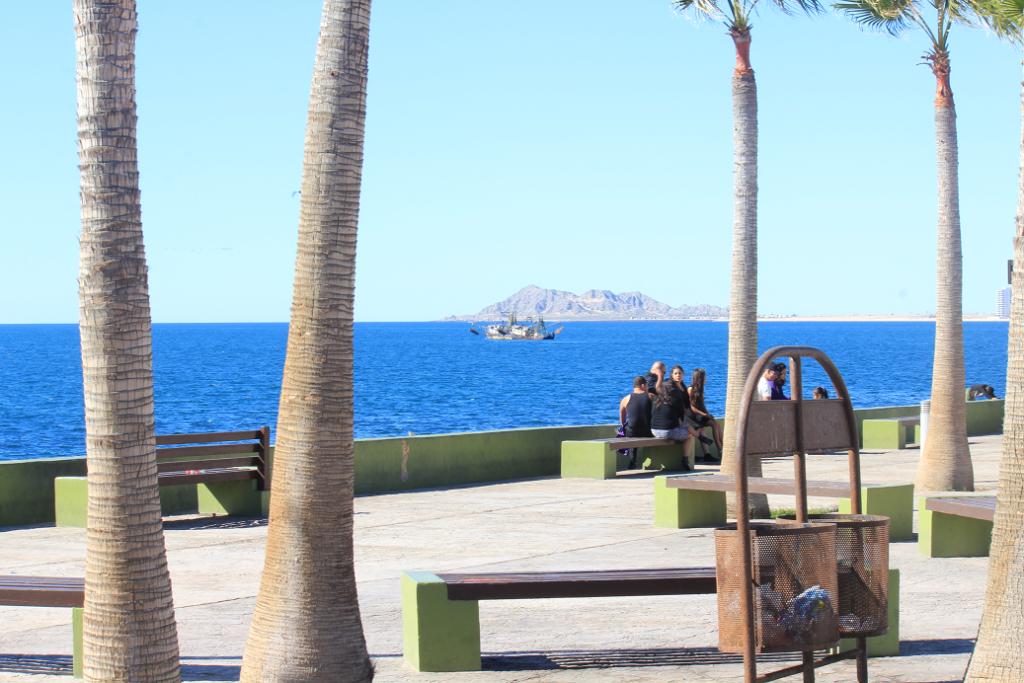 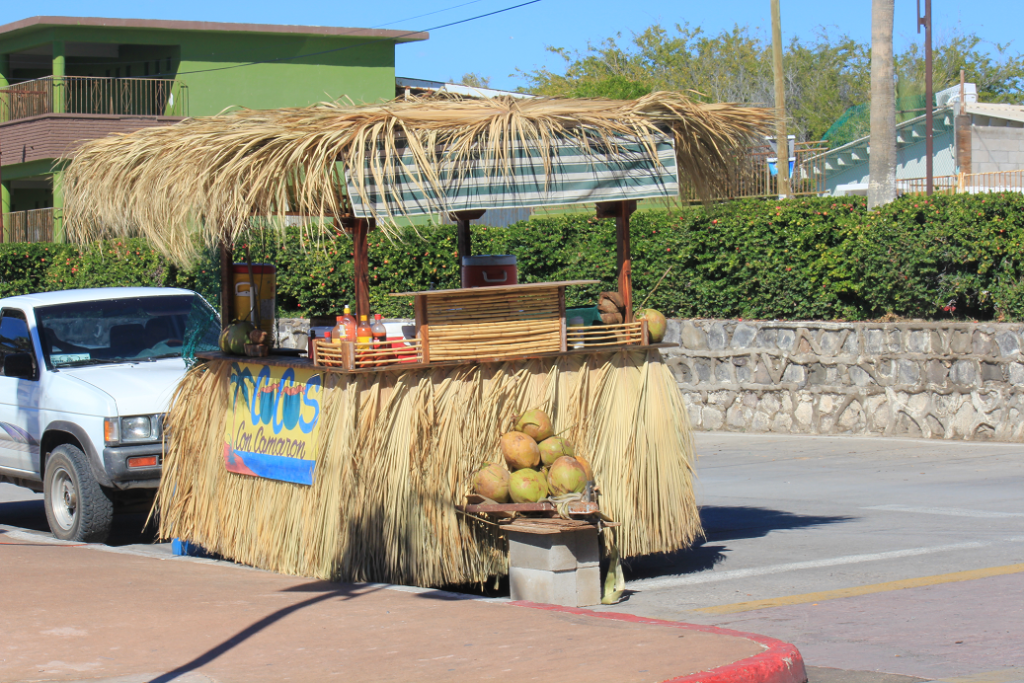 We went for a walk through The Reef RV Park, and came across a large group of retirees all painted up in Seahawk colours. They had buckets of beer, appetizers and two large tvs hooked up to satellite, all ready for the Super Bowl, due to start within the next hour. “If you’re Seahawks fans, go get your chairs and join us!” they called out. We would have loved to but it was getting late in the afternoon and we needed to get back to our dogs. 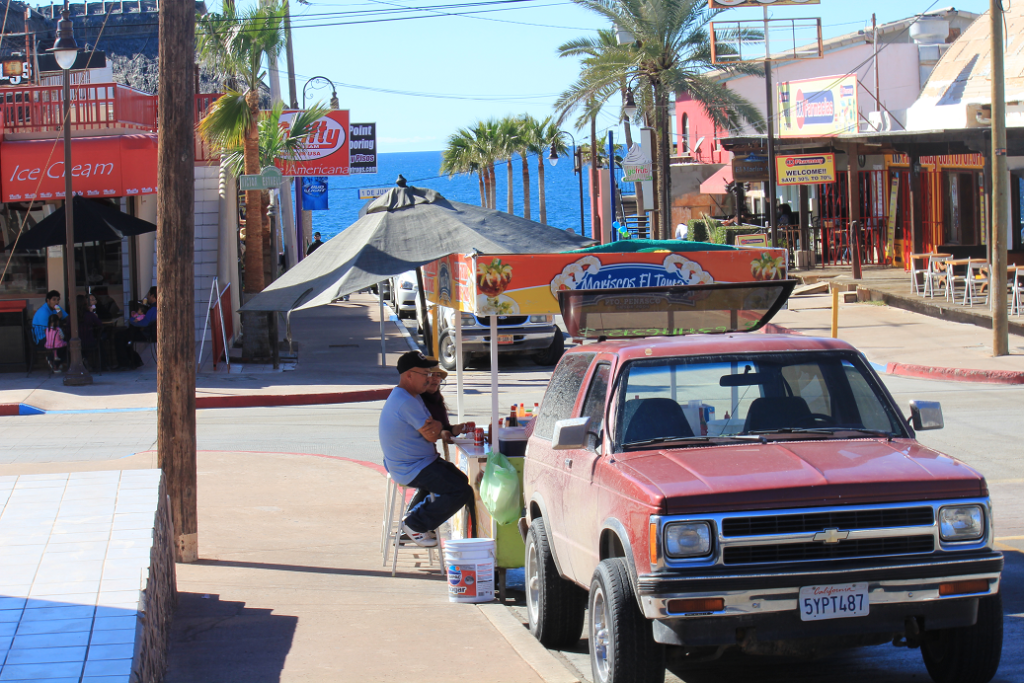 The sandy road goes further down Sandy Beach to La Choya. Rented ATVs zoomed off on both sides of the road and up the hills near the end of the beach. We decided to go down and see what was out there. It appeared to be a community of ex-pats, many flying Canadian and US flags. It was a cute little beach town with tiny sand alley ways rather than roads. Some homes looked very rustic while others looked worth a lot of money. 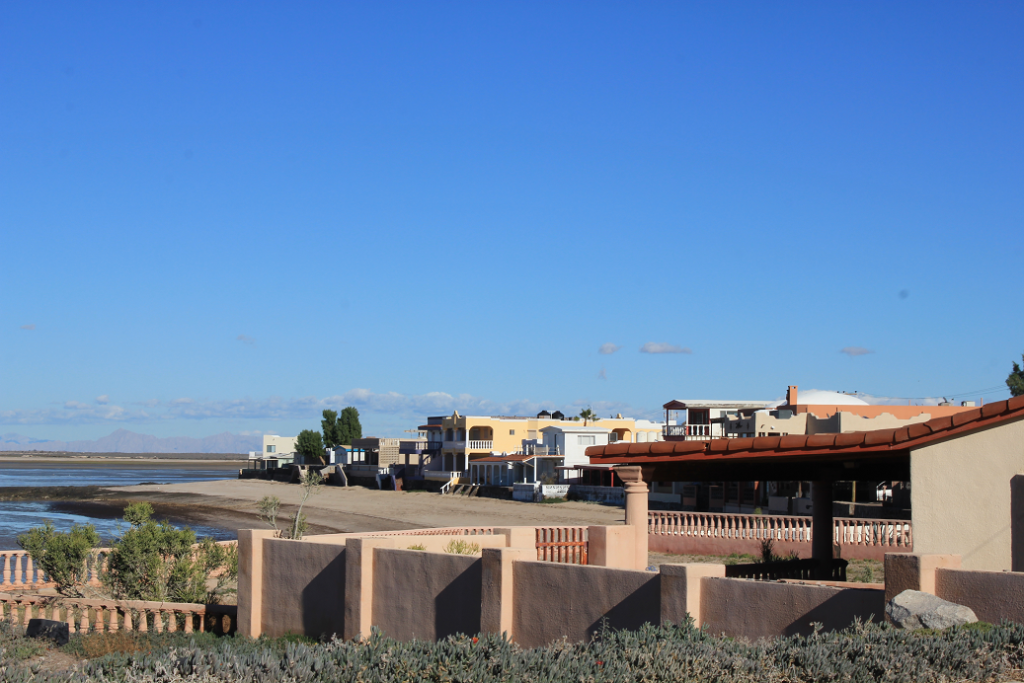 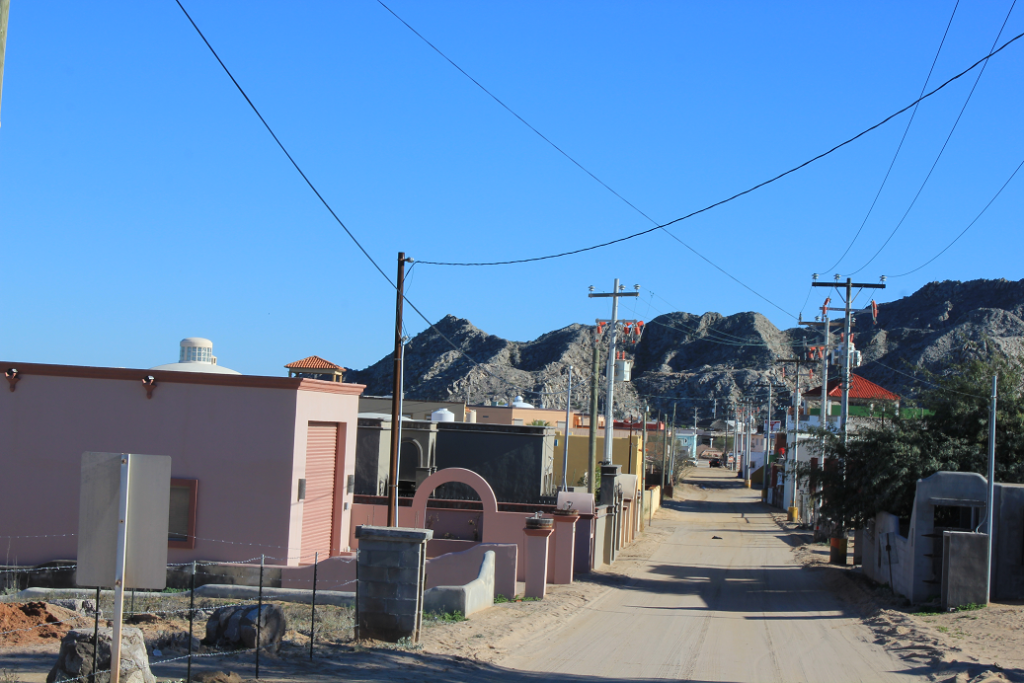 The drive back seemed to take half as long as the drive down and this time, driving through Sonoyta felt so much better. We saw women and children outside in the streets, people selling stuff, and shopping. The road stop with the men asking for money seemed friendlier. They smiled and said “Gracias” as Harold plopped some money into their bucket. It suddenly occurred to me that the lack of women and children in the morning may have been due to them all being in church, or even busy making breakfast. It’s interesting how the lack of women and children can make a place feel more sinister. We’ll definitely be going back.