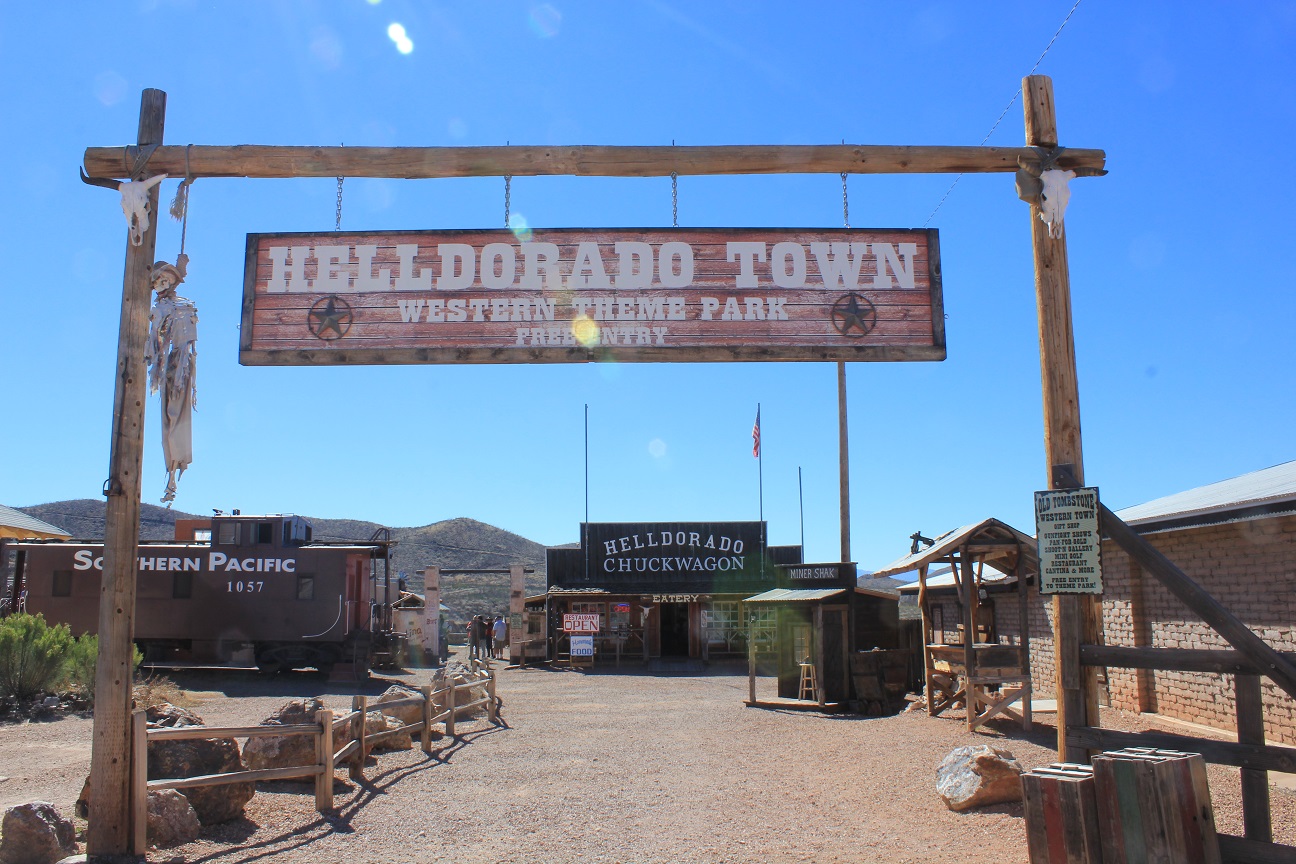 On Sunday, my parents offered to look after our dogs while we drove down to Tombstone and Bisbee. We left early, forsaking breakfast to get on the road, but the temperature was already pretty hot. By the time we drove into Tombstone, we were both pretty hungry and the sun was blaring hot.

Cars lined the road into the touristy part of town, but we were lucky and found a good parking spot. We traipsed up the gravel lot into an old western town that was a whole lotta hoopla and not a lot of substance.

They have volunteers all over town dressed as old west citizens and they got right into character, with the floozy women making advances on men and the gunslingers getting ready to fire on each other and us. Harold isn’t one of those men who enjoys the wanton attention of floozy women – at least not in front of his wife, so he didn’t give them a chance at all. He just pushed on by and got pictures of men who do enjoy their attention.

We had a pretty bland breakfast at one of the old west restaurants and then came outside to see a group of aged bikers roar up on their super fancy Harleys. The couples all appeared to be of retirement age, and spared no expense on looking like official bikers, except with super high end gear and clothing. These were no Sons of Anarchy – this was more like an elderly Town & Country take on living life as a biker. The clincher was watching all the older biker mamas helping each other climb off the backs of their old man’s (literally!) hogs. No spry chickens here. I wonder how many actual miles they put on their bikes.

Tombstone was pretty much what we expected, and I don’t want to denigrate it but all in all, it felt like a huge tourist trap. Not a big surprise. We had to see it once. Now we’re done – and we have the t-shirt to prove it.

Bisbee started as a copper, silver, and gold mining town in 1880. It was named after Judge DeWitt Bisbee, co-owner of the Copper Queen Mine. Mining was very successful, the population grew exponentially, and suburbs grew up around it. In 1917, miners tried to unionize and in retaliation, the Phelps Dodge Corp. had 1000 of them rounded up and transported to New Mexico. I’ve read about that happening in other places. I know it happened to railroad workers as well. Workers in the “old days” had little protection and were expected to take a lot of risks.

Eventually mining slowed to a crawl and the population moved on to other places. In 1976, the Queen Mine Tour was added as a tourist attraction to make up for the loss of mining in the area and the population rose slightly as a result.

In 1970, the artist Stephen Hutchison and his wife Marcia Hutchison purchased the Copper Queen Hotel for $1.00. They renovated it and a number of other downtown buildings and began to advertise it as a tourist destination. The actor John Wayne came to visit often and decided to partner with a developer on ventures in the town. As a result of all the gentrification, hippies and artists flocked to the area.

Today, the town is a very livable and walkable town with a great artsy southwest vibe. We drove down the windy hillside Tombstone Canyon road through town and parked at the bottom. First we walked up Brewery Avenue, a winding little alleyway with restaurants, a brewery, an elevated park and old buildings lining the road. I was surprised to see a vegan restaurant and disappointed that we’d already eaten in Tombstone. Unfortunately, WHyld Ass has since relocated to Flagstaff due to low numbers in Bisbee.

A little further up we came to a dilapidated building covered in colourful graffitti with an area set aside to leave items for anyone who needs them. Up top was an elevated park, where we witnessed an argument between a few homeless people who had just finished having a feast of found food items.

I didn’t want to get involved but as always, I have a hard time not watching the drama go on. They just ignored that we were there and I made sure to pretend we weren’t noticing. There were a few more parting shots taken by each, then the man was out of sight. The woman turned her attention to the sole person (other than us) who was left, and kept right on yelling about the “Bitch-f’ing-bitch-bitch-bitch-f’er-bitch” who was now long gone. I wanted to know what had happened, but she seemed to be quite upset and potentially dangerous, so we moved on. I didn’t want to be her next “Bitch!” We’ll just never know.

We wound ourselves up and around the hill. A number of the old storefronts had been converted to housing. In one, the front doors were thrown wide open and two musicians sat there, one playing a banjo, the other a mandolin. We stayed to watch for a bit, then moved on, their music following us up the hill. The homes are all old, unique, and built into the sides of the hill and the road seemed to keep going and going. We turned around and came back down.

Hot and clammy, it was the perfect time to visit the Old Bisbee brewery. It sits right at the bottom of Review Alley, with the brewery vats in a building on one side of the alley, and the two story tap room on the other. Inside were a few people, but we followed the din of voices from up and outside on the shaded patio.

There were so many good selections, so we opted for a sampler of 7 different brews:

We were really torn over buying a growler of beer to take back with us. In the end, we chose a logo beer glass, a photo and our memories.After our beer respite, we wandered up the Tombstone Canyon, visiting the Copper Queen Hotel and a number of small stores. We wound back and forth between the road and side alleyways. The sun was scorching hot now so we tried to stay on the west shaded side. Unfortunately the east side was where most of the interesting stores were so we went back and forth. Once we reached the top, we wandered back down the hill again and finished our hike back at the car in the late afternoon.