For our second vegan restaurant foray, Harold and I met my parents at the Graze Restaurant on Fraser street, in Vancouver. I had high expectations for this place, after seeing the photos of the food online. Downstairs, they have a more formal dining area where they serve three course meals, and upstairs is an indoor park where they serve casual food, recreating their menu every 6-8 weeks. We were too early for the park, and besides, since it was our first time here, we wanted to try some of the amazing creations we’d viewed on their web site. 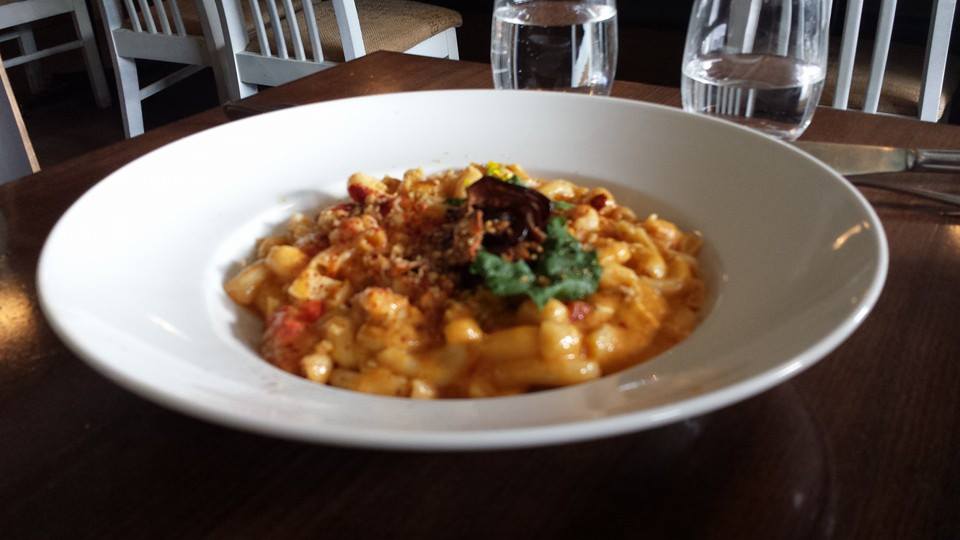 My stepfather had Macaroni with smoky coconut cheese sauce. We all sampled it and comparing it to the simply amazing macaroni we’d tasted at Meet on Main last month, we found it to be no contest. It was just bland. 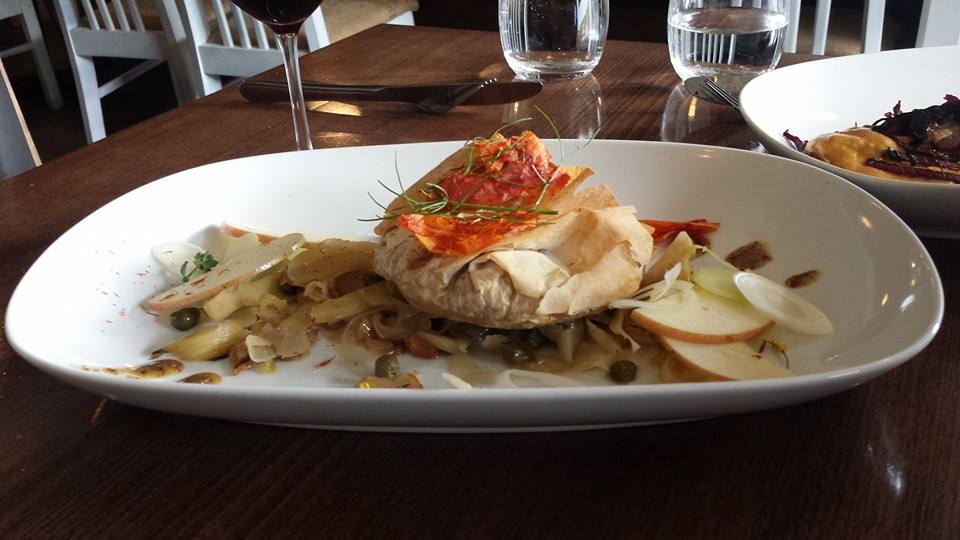 My mother had the Wild mushroom purse, which was beautifully presented, but again, bland. Also, because it wasn’t paired with anything like pasta, or lentils, or rice, she was hungry again an hour after dinner. 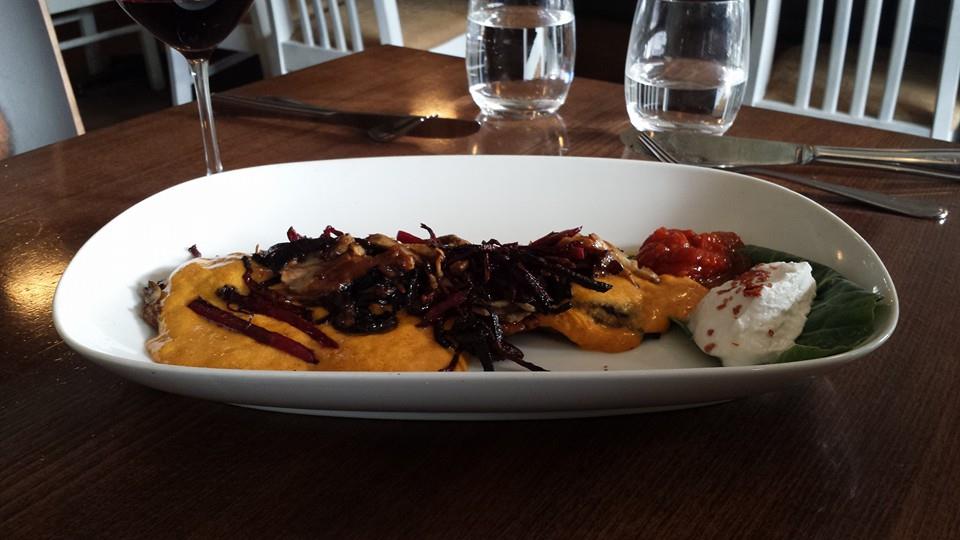 Harold had the Yam and eggplant perogies, and even though regular perogies are naturally pretty bland, these were more so. 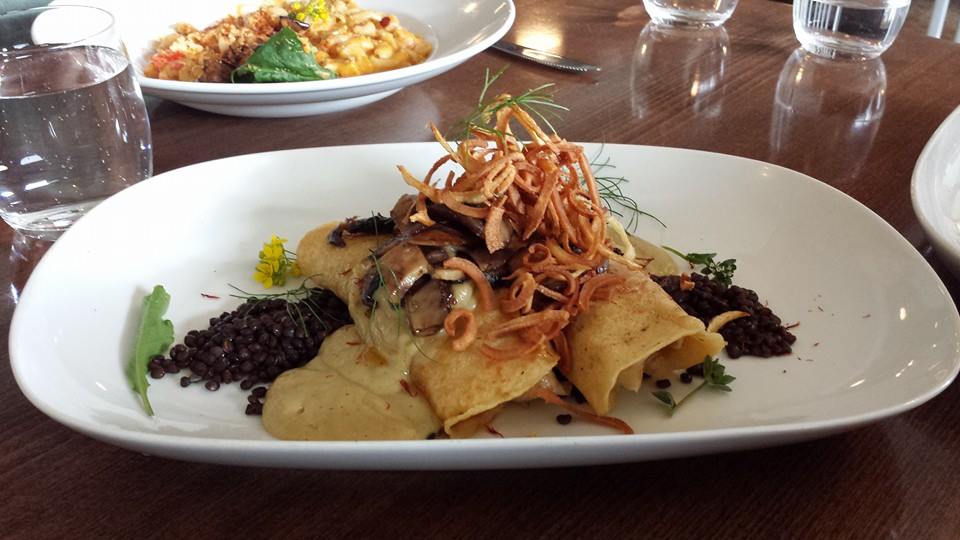 I had the Sage and chickpea crepes, what I considered to be the most tasty and imaginatively presented of all four dishes, but again, there just wasn’t enough flavour.

The food was amazingly beautiful but we all agreed, it lacked in flavour. We were disappointed in this restaurant. It was pricey, with very beautiful food, and a nice decor to the restaurant, and if the flavour had been as good, we wouldn’t have minded the price. But I just can’t bring myself to enjoy the food for purely aesthetic reasons. It needs flavour.

After dinner, Harold and I said goodbye to my parents and drove out to Abbotsford, to theTwilight Drive-In. We had to stop in at home, on the way, because as we were having dinner, my mother brought up a story of how years back they had gone to the drive-in and been looking for the sound boxes you used to pull into the car. They had been surprised to find it now went over the radio airwaves. A big *DONG* went off in my head – we’d forgotten the face plate for the car stereo at home! It was so lucky that the subject had come up or we’d have been kicking ourselves with no way to hear the movies. 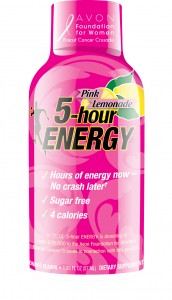 It’s weird that while I stay up regularly until 3am, I typically fall asleep at the drive-in on the early side. So last night, I decided to try one of those “5-hour Energy” shots I see at the gas station all the time. I’d never tried these before. I chose the pink lemonade flavour and it turned out to be seriously disgusting – way, way worse than the few horrible sips I’ve had of the energy drinks Cairo used to imbibe. It’s kinda like the fluoride treatments you get at the dentist, where the flavour is just a really bad cover-up for something truly putrid. Actually the fluoride taste is much better than this stuff. This stuff is super sweet and super sour at the same time. Thankfully, it’s a really small bottle. I gagged down the 2oz in 2 quick glugs (OMG! I just used one of the words my mother has tormented me with all my life! I’m truly turning into her. Should I delete that word or just accept my fate?) as my system screamed out in revulsion.

The last time I tried using something to keep me up, other than coffee, was in college. The caffeine pills made me all jittery and anxious, as if I’d been up all night drinking 6 pots of coffee. I figured the energy shots would be similar, but in actuality, I didn’t feel different at all. I did, however, stay awake the whole time at the drive-in and then at home through all of my recording of SNL. I fell asleep about 4:30 am. I’m sure these things probably fall into the negatives on the health scale, but it worked as promised. I’d call that a success.

The movies we went to see were: 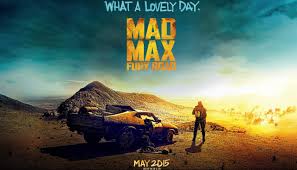 2) Hot Pursuit – Embarrassingly bad! How can two good and funny actors like Reese Witherspoon and Sofia Vergara not realize that the humour in this movie is seriously stupid and beneath them?? I wanted to reach in and wring both their necks. 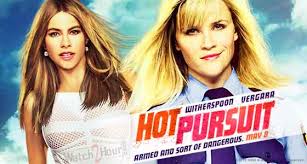 3) Run All Night – I used to enjoy Liam Neeson. Now he’s a bore. We stayed to watch half the movie to give my daughter time to clean up after her party, but it wasn’t worth staying until the end. We came home to a nice, clean place, so it was worth staying for that first half. 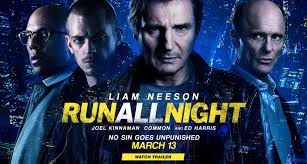