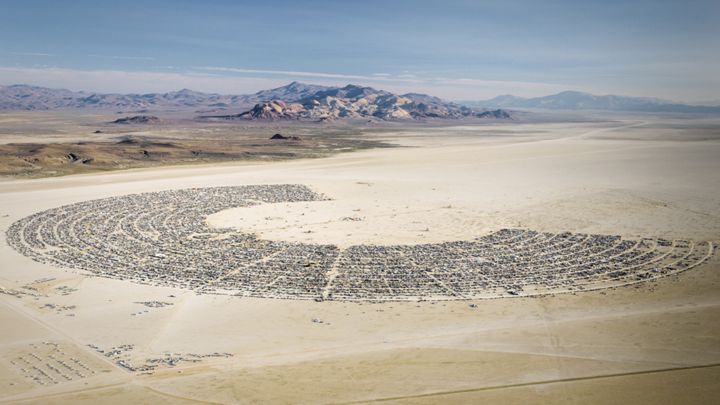 When they took our tickets on the way in, they gave us a book and a map. The book is our guide to Burning Man. It details all the events going on (well, all those that made it into the book. We’ll find many others during the week that never made it in) on a day to day basis. There are events that repeat daily, some that go on all day and others that are one time events. 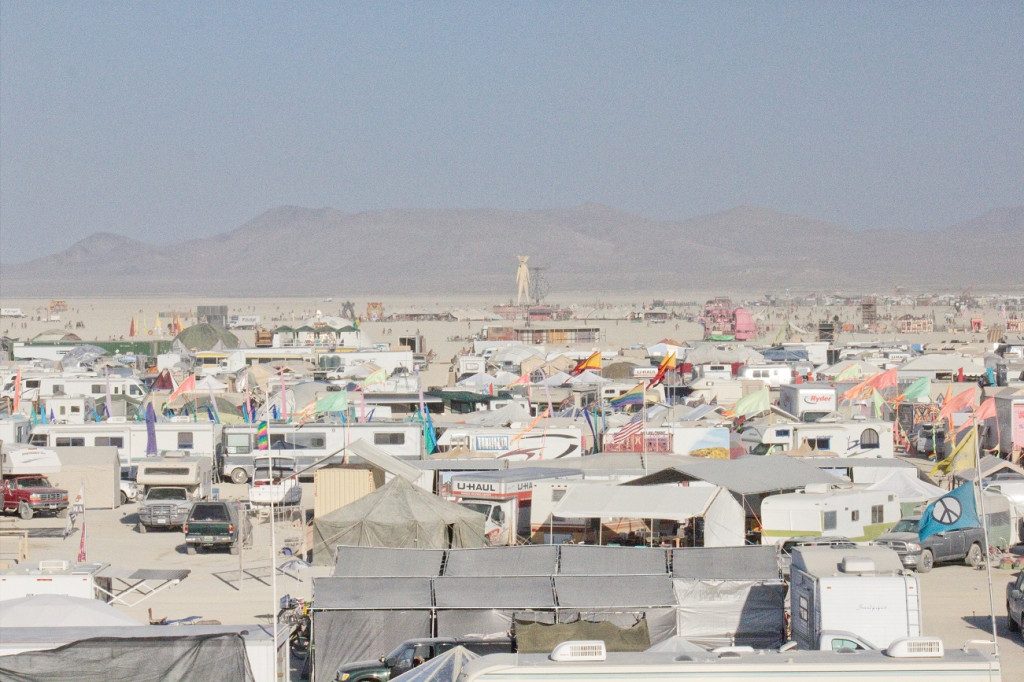 Skimming through the book, I start to notice a pattern. Early in the morning, there are a ton of yoga, running and fitness events. Burning Man is seriously into yoga – pretty much every type you could want is available (including Laughter Yoga) and there is always some going on somewhere at any time of day. Even in centre camp, you’ll find people practicing solo and poly poses while others watch or wander on by. 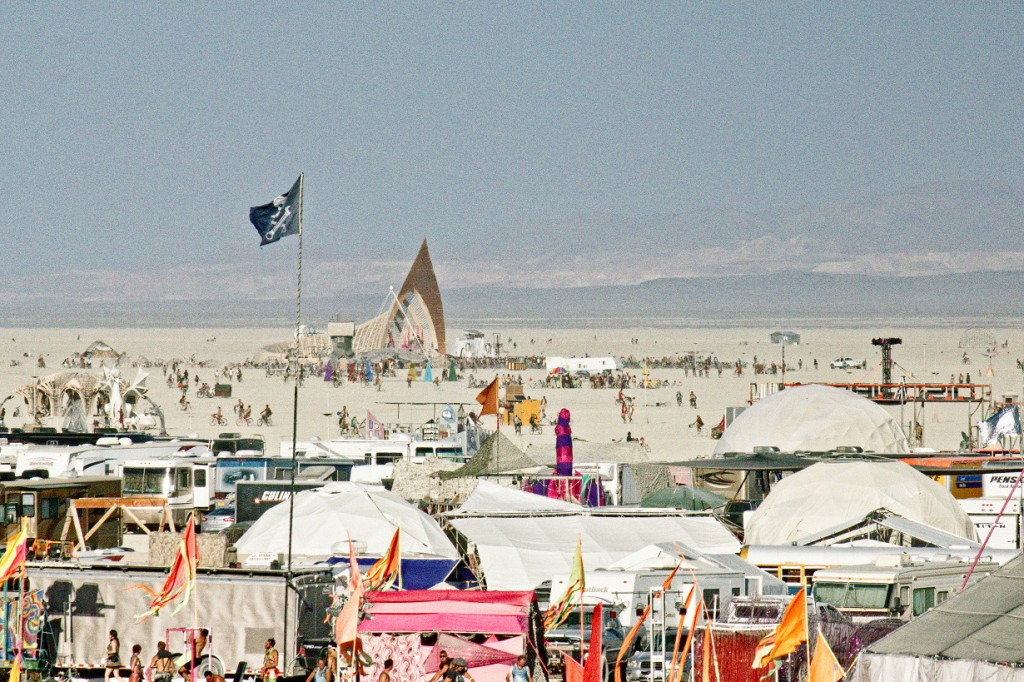 There will be a bunch of camps serving coffee – hot, cold-brewed, turkish – and some that serve food with it – stroopwaffel, bacon, and cake. We deign to try them all – but pass up on the bacon. If coffee isn’t your thing, there’s chai, mate, and boba teas, mimosas or bloody marys. You can recover from last night or just keep going. There are camps who will supply detoxifying elixirs and those who will retox you. Some do both. 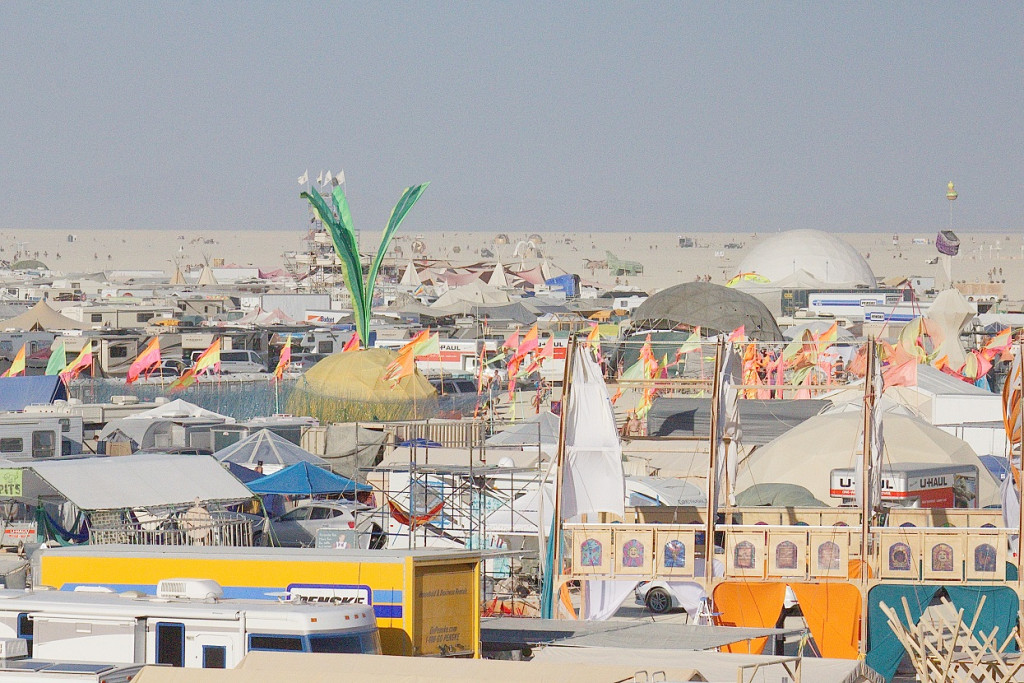 Mornings and afternoons are a mish-mash of events. There are crafts such as making your own horns, a tiny top hat, or a metal bikini. You can get your body or face airbrushed, or a t-shirt screen printed. You can have your hair washed, body washed, your nails done, get a massage, learn how to give a good spanking, or get your pubic area jazzed up. You’ll find meditation, talks on finding yourself, or make up a love potion to share with another. There are Tedx talks, tarot readings, ecological discussions, solar cooking demos, and slave auctions. You can run a 5k or a 50k, do Zumba, Belly dancing, or opt into a couples contact improv massage. 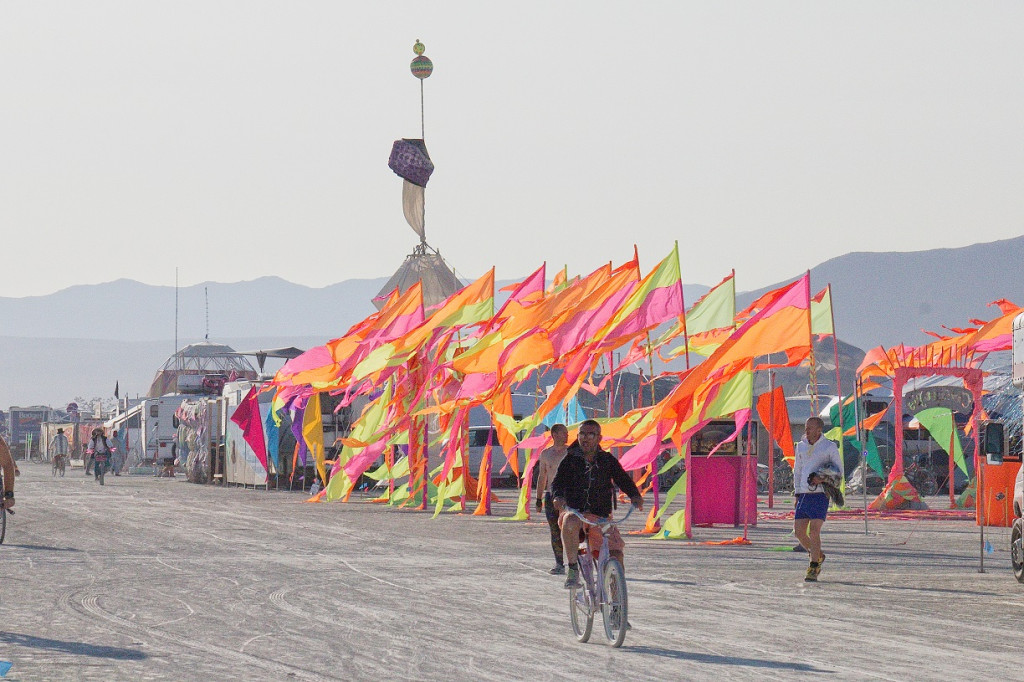 Night time events start with an array of happy hours, and meld into parties that stretch late into the early morning hours. There is music appealing to all types, and art cars everywhere touring people around, playing their own music all day and all night. One camp had double feature movie nights starting at midnight every  night. There are electronic dance parties going on every night, all night long. 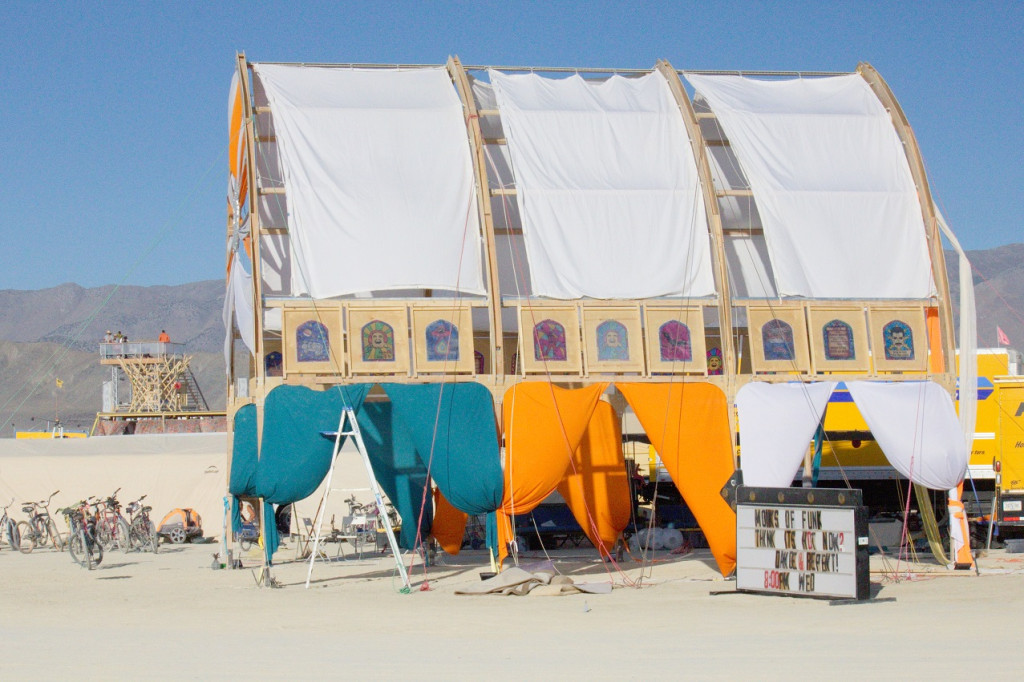 There are all sorts of different sex events for different genders, tastes, and kinks. Some welcome single men. Others are open only to non-monogomous couples and single women. It’s there if you want it, but if you’re not interested, you never have to see it. The same goes with drugs. Yes, lots of people do all sorts of drugs there, but if it isn’t your thing, it’s no big deal. 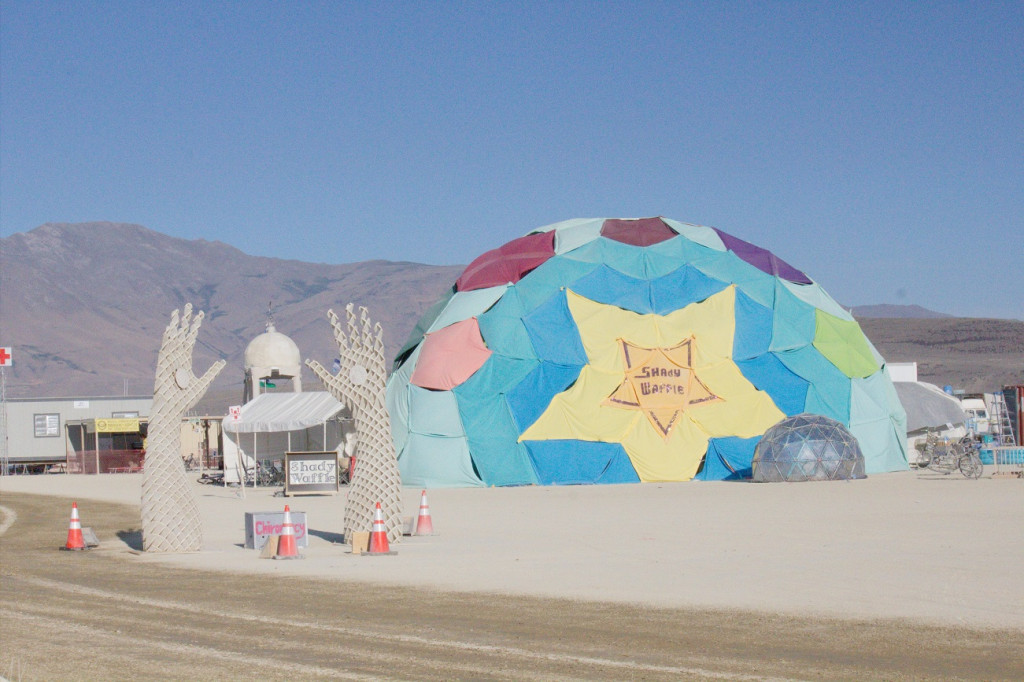 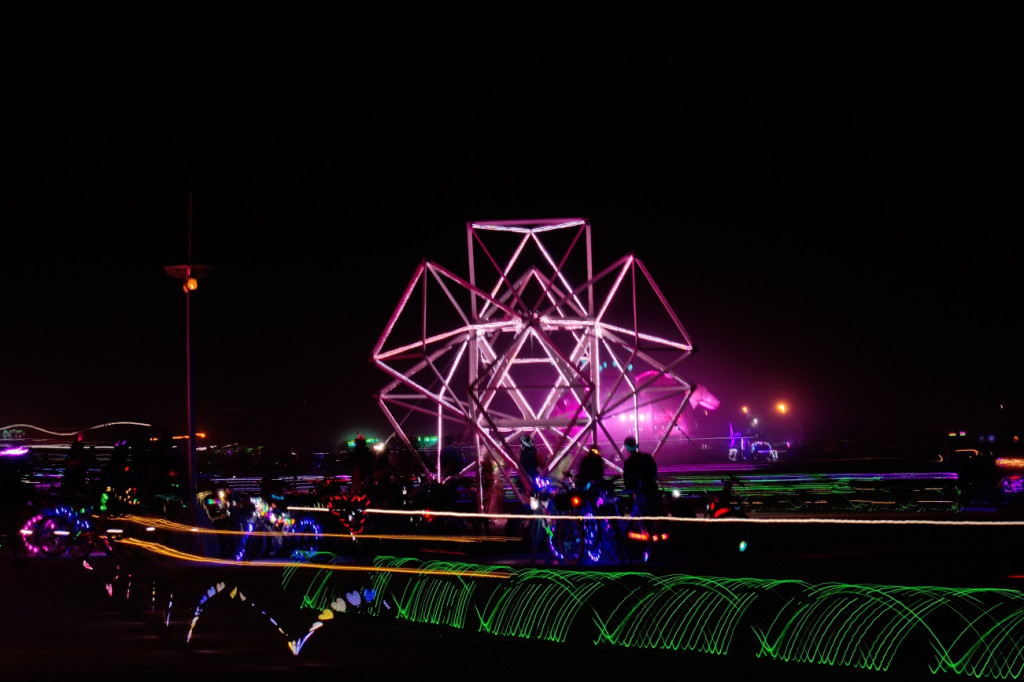 We decide to decorate our bikes, and then head out to the Playa. It’s important to be very well lit at night, both your bike and your body, but most people like to decorate with all sorts of imaginative accessories as well for day use. 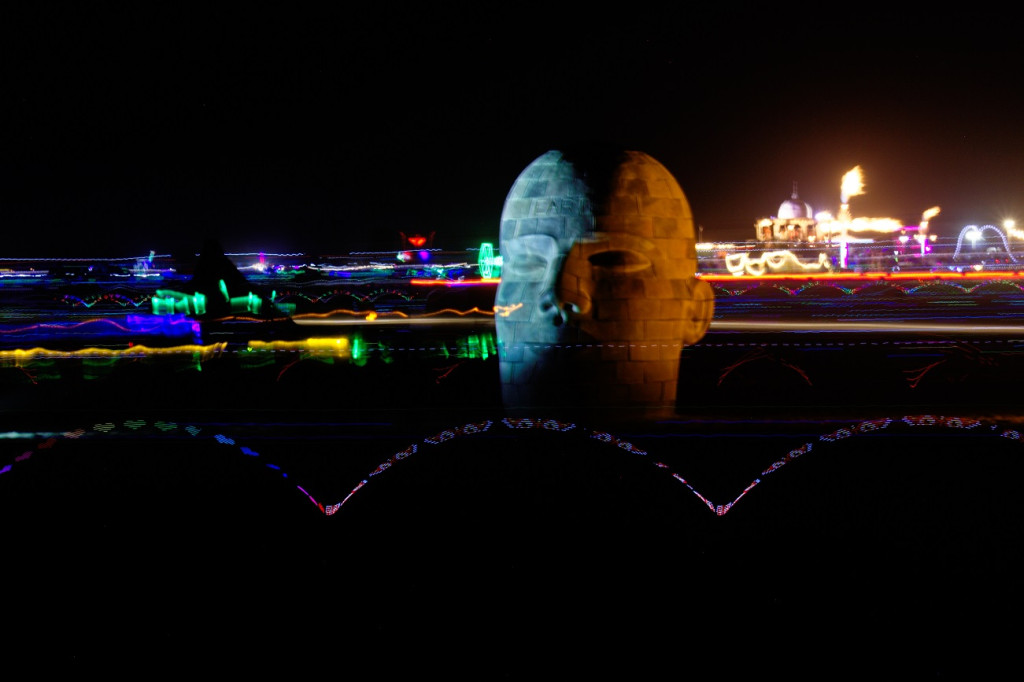 It’s also important to have a hat, dust mask, and goggles, in case you get caught in a white out. 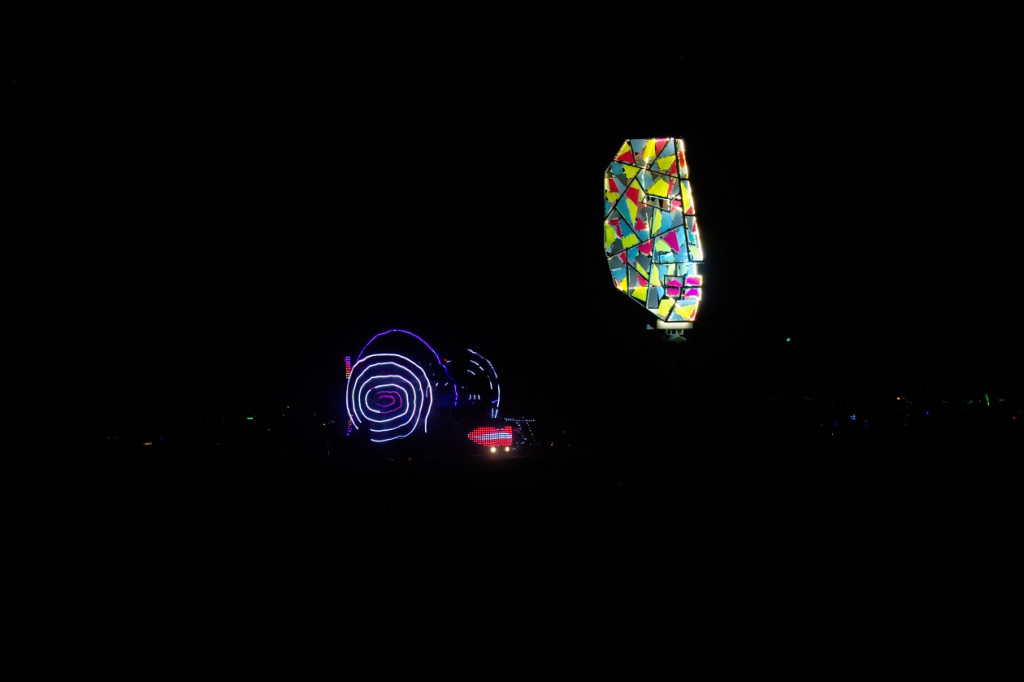 Most importantly, you must always be drinking water. The sun dehydrates you even when you don’t feel it. We brought our camel packs, which I de-commodified by scratching off the letters to turn “Reebok” into “Feel ok”.

We keep these filled at all times and plan to empty them once by noon and another time later in the day. The line we keep hearing on BMIR (Burning Man Information Radio) is “If you don’t piss clear, you shouldn’t be here!” 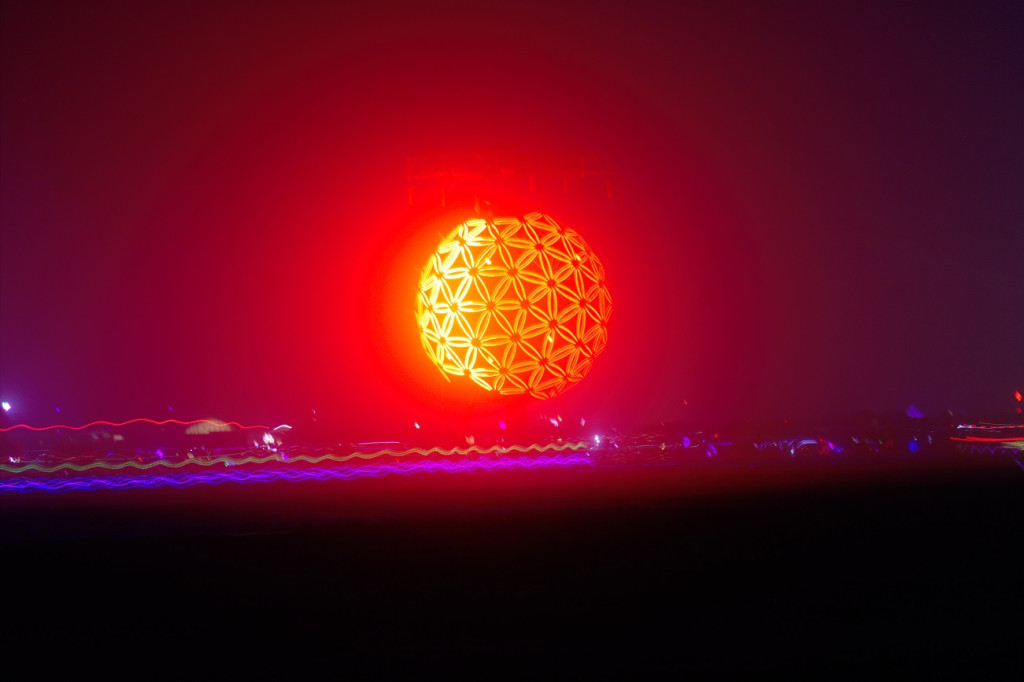 It’s hot and sandy out on the open Playa. This is where all the big art installations are. I had thought there would only be the man and the temple, but there is so – so so so so so – much more, and it’s difficult to not miss some. We tried to make a point of stopping and paying attention to everything we came upon. There seemed to always be something more to discover – nothing was ever just as it seemed. 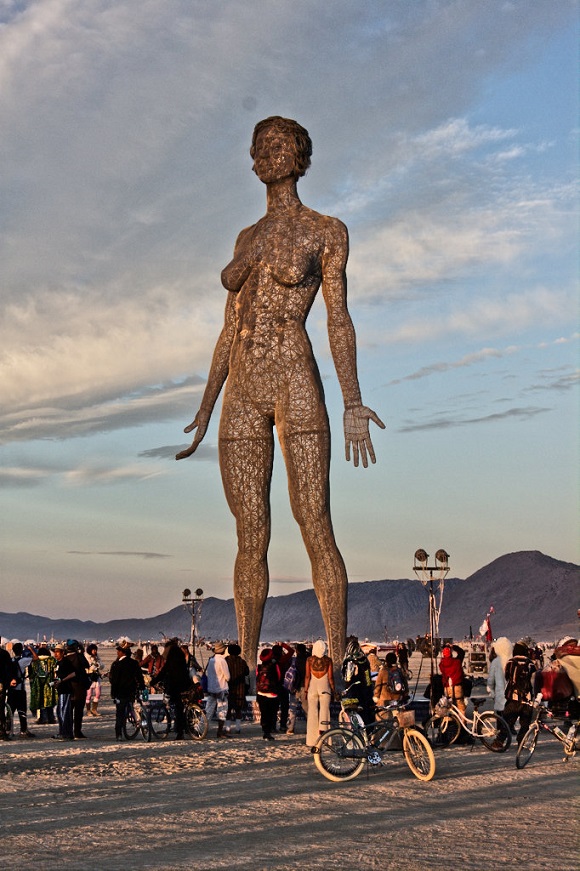 There was the huge woman who stood silent and stoic, but when you stopped and watched her, you could hear and see her breathing. Her rib cage came in and out almost imperceptibly. 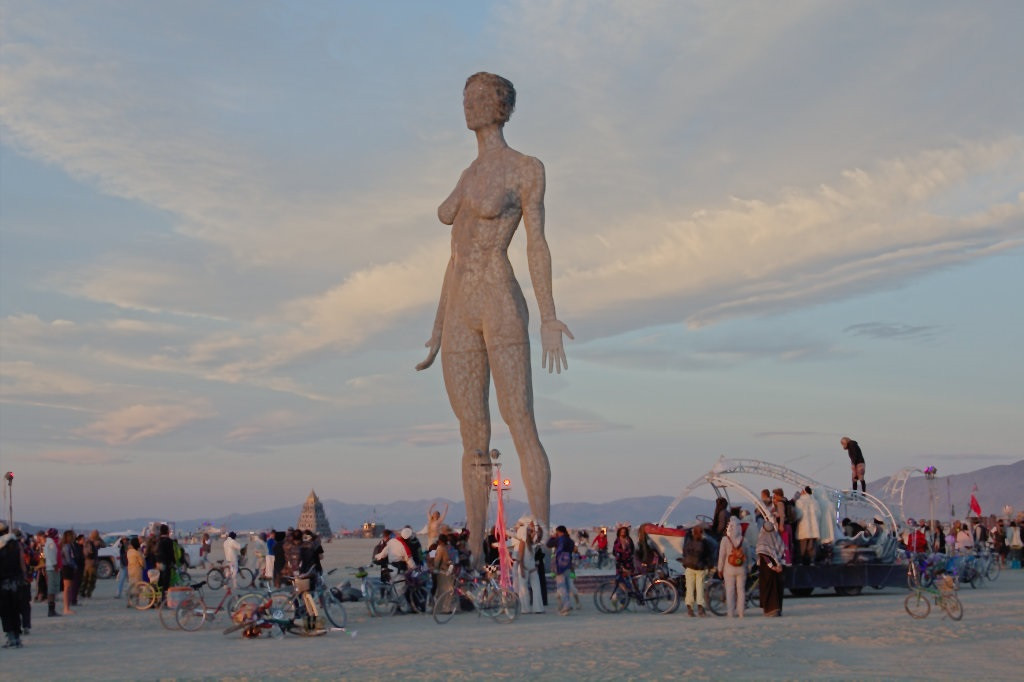 We’d find later on that night her colours would change from red to blue and there was a white light that shone from her chest. We heard a rumour that she would raise her hands to greet the sun at sunrise, but I don’t know anyone who actually saw this happen. 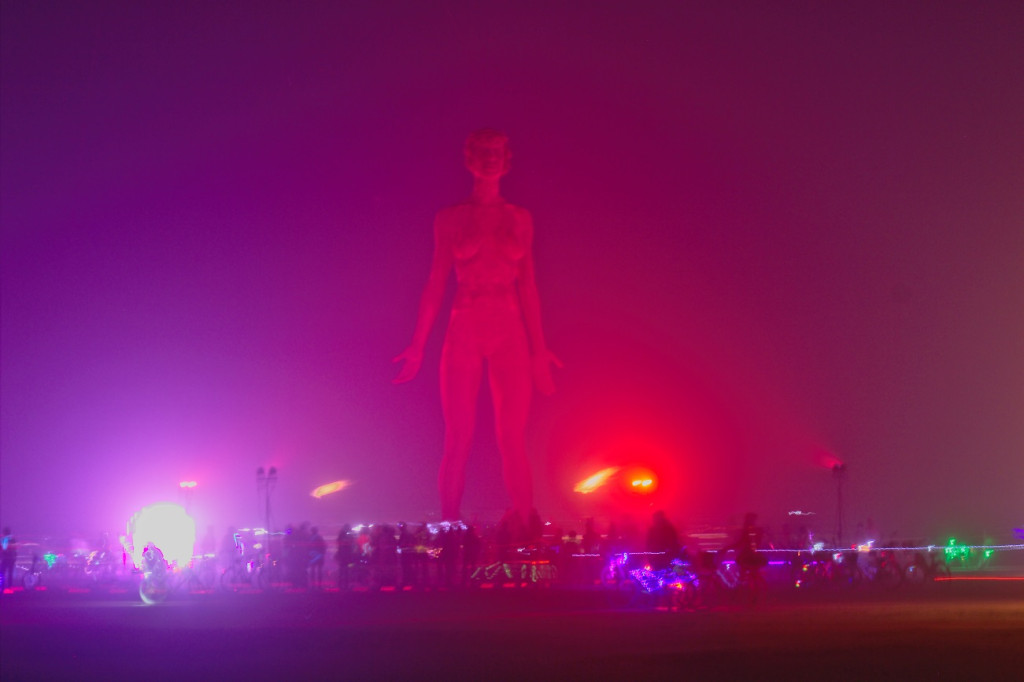 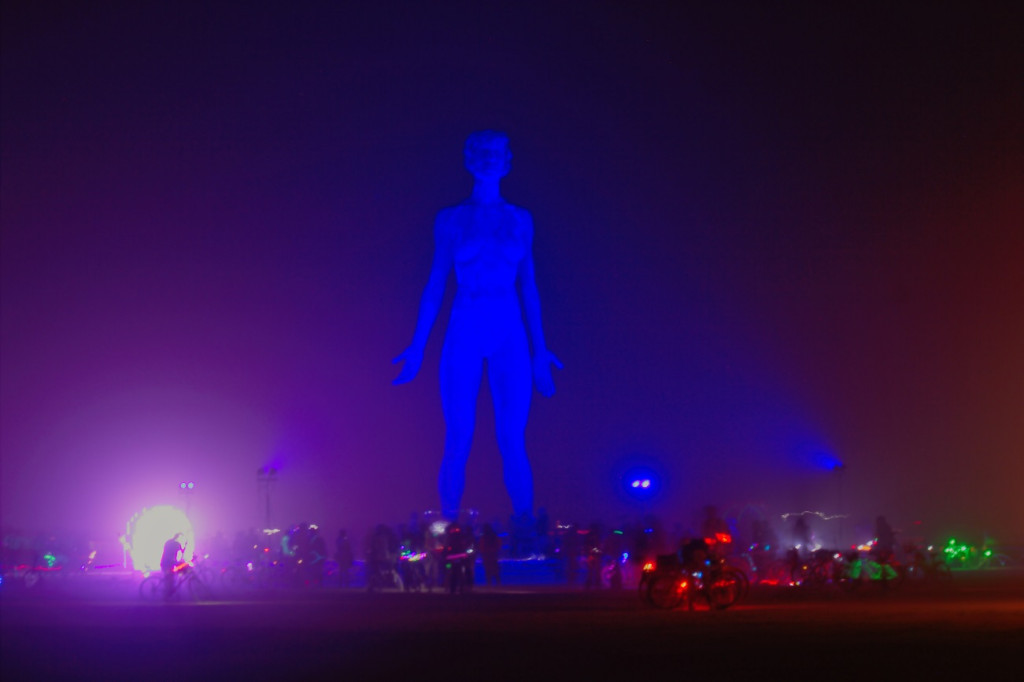 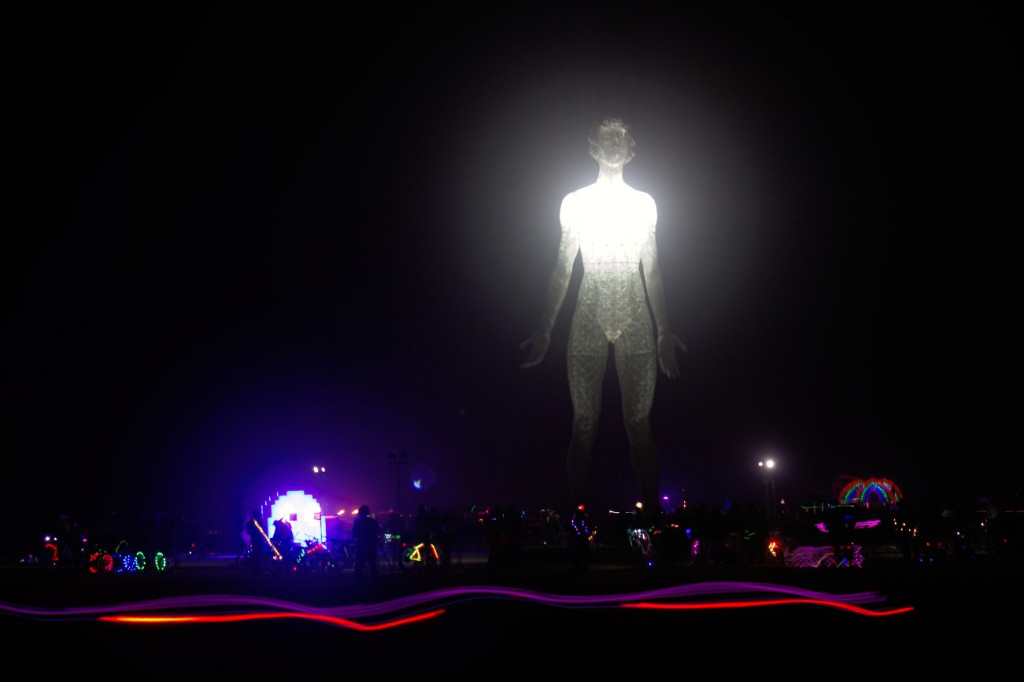 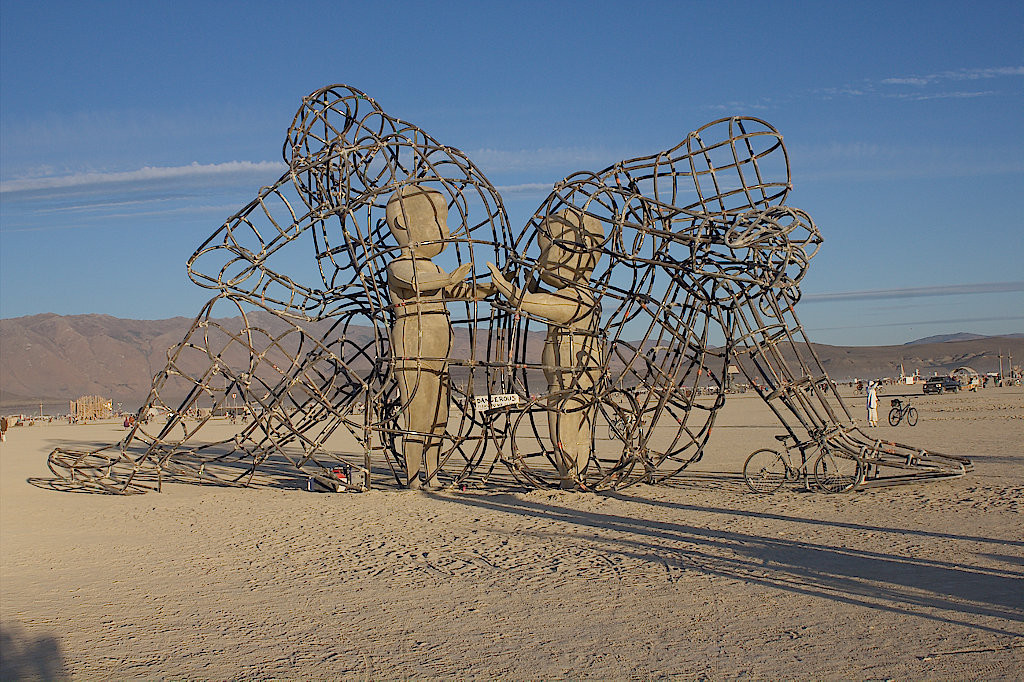 This sculpture was a figure of a man and a woman, made in the form of cages, sitting back to back, in a stance showing obvious conflict with each other. Trapped inside each of them is a child, holding their hands up, wanting to connect and love the other. At night, the children glow bright white, symbolizing their purity, amidst the dark times. 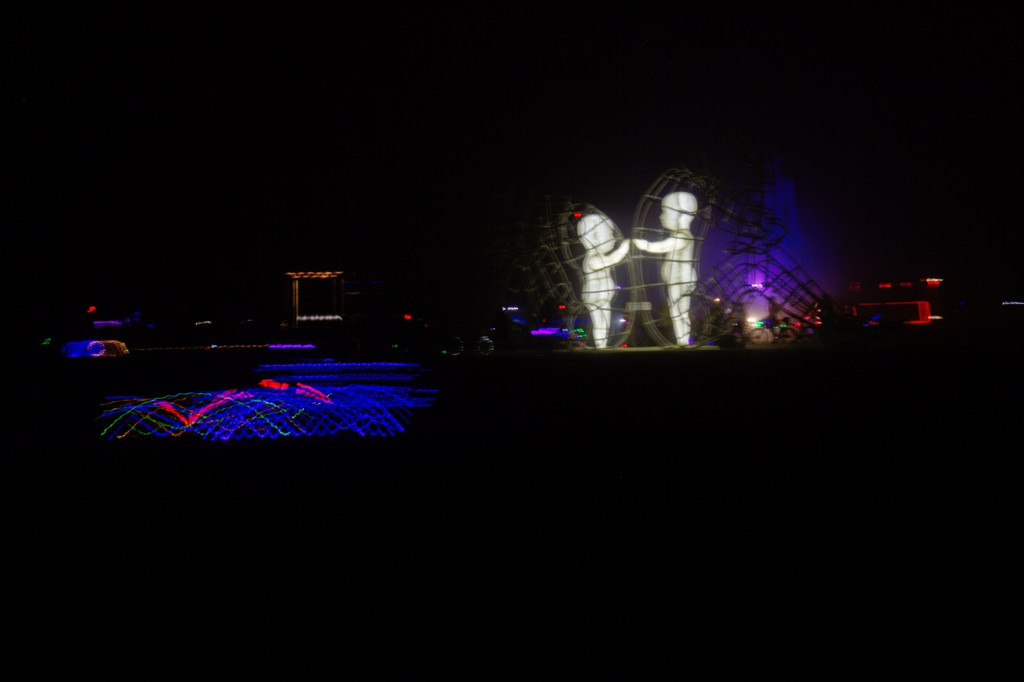 “Mazu Goddess of the Empty Sea” by the Dream Community

When we were riding past, we came upon a ceremony with dancers and Mazu disciples who were carrying a statue out of the temple and off the Playa. Harold tried to take some pictures but unfortunately, the camera was out of power. 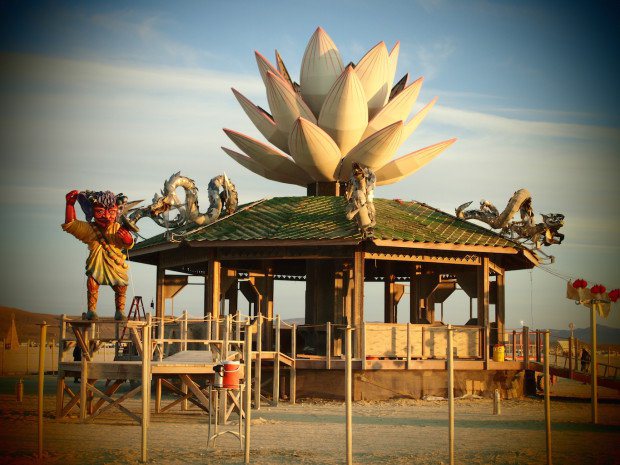 The Goddess Mazu’s temple is built of wood and steel. Surrounded by lanterns, you cross to the main temple along piers. On top of the main structure sits a large lotus sculpture, with fire breathing dragons on the rafters. Meditation and chanting workshops are offered in the mornings. You may ask a question of Mazu and throw moon blocks. If three people in a row get a yes answer, the dragons will breathe fire and the lotus will give off a magical colored effect.

Blunderwood Portable by The Cat and The Cockroach Collective

A giant, climbable typewriter with a shaded hangout space. The keys have sensors that drive projections of letters on a “paper” screen. 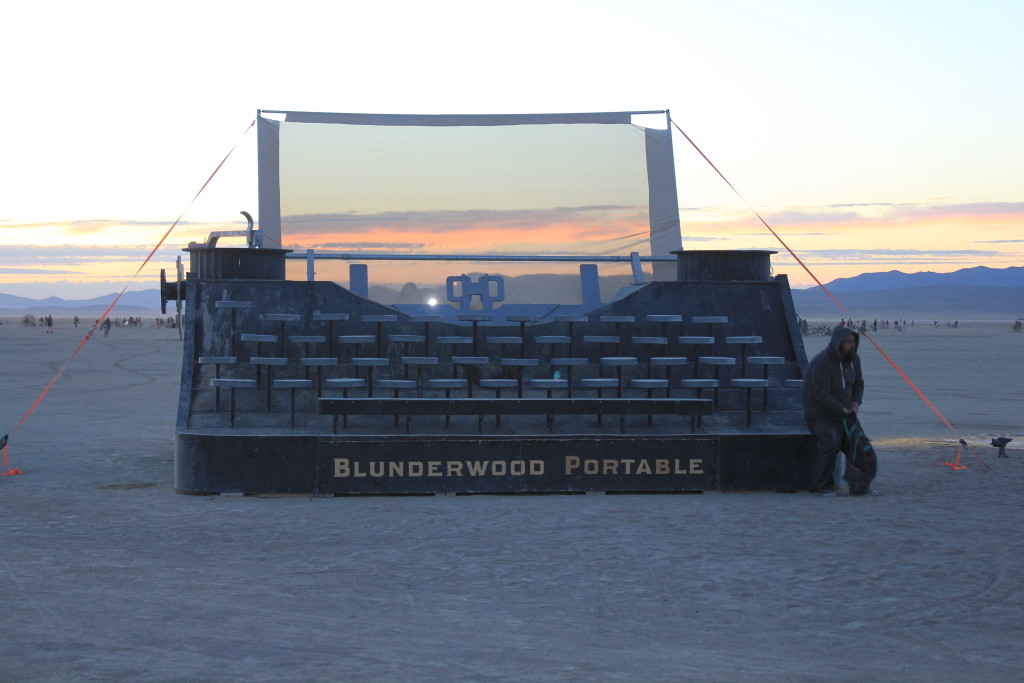 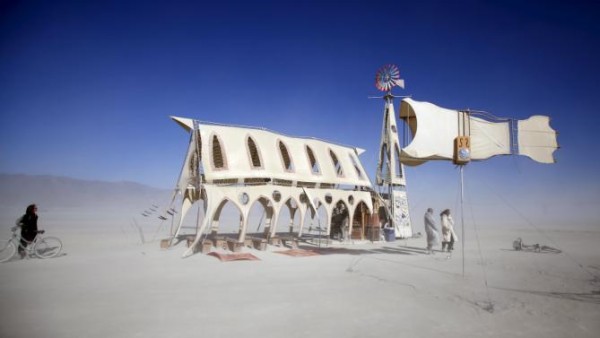 The organ here is powered by the wind. When the wind blows, the organ can be played, but when the day is still, no sounds can be heard. 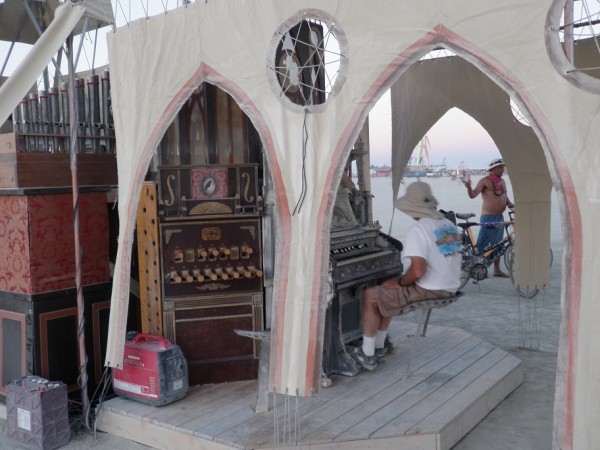 Quote: “Excavated from a dust bowl near the border of Oklahoma and Saskatchewan, the Prairie Wind Chapel was once the heart of the roving town of Aeolia until a tornado wiped it all from the map. As the sole remaining structure of this ghost town, the chapel captures the pilgrims’ peculiar affinity for worshiping the wind and the beautiful mysteries this silent force creates on the open plain. Twin copper wind harps flank the canvas chapel, enticing lost travelers with a dreamy siren song. Towering over the altar is a 40-foot steel windmill which pumps a Victorian reed organ and two wood and metal pipe organs. Evoking the melancholic demise of the wind worshiping Aeolians, modern pilgrims can play three wind-powered keyboards, filling the restored chapel with the ephemeral sounds of yesterday. The Prairie Wind Chapel welcomes all wayfarers with its songs!” 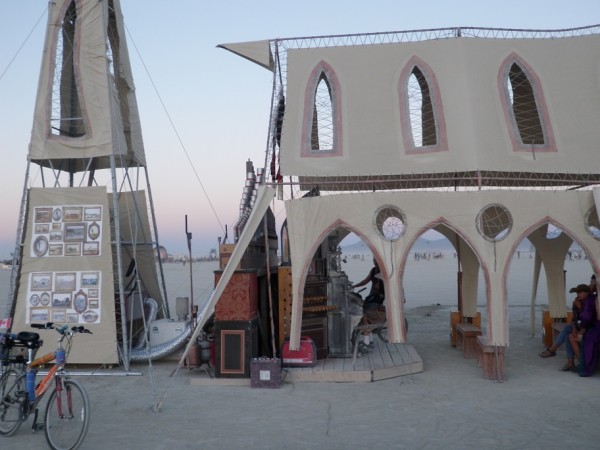 “Temple of Promise” by Dreamers Guild 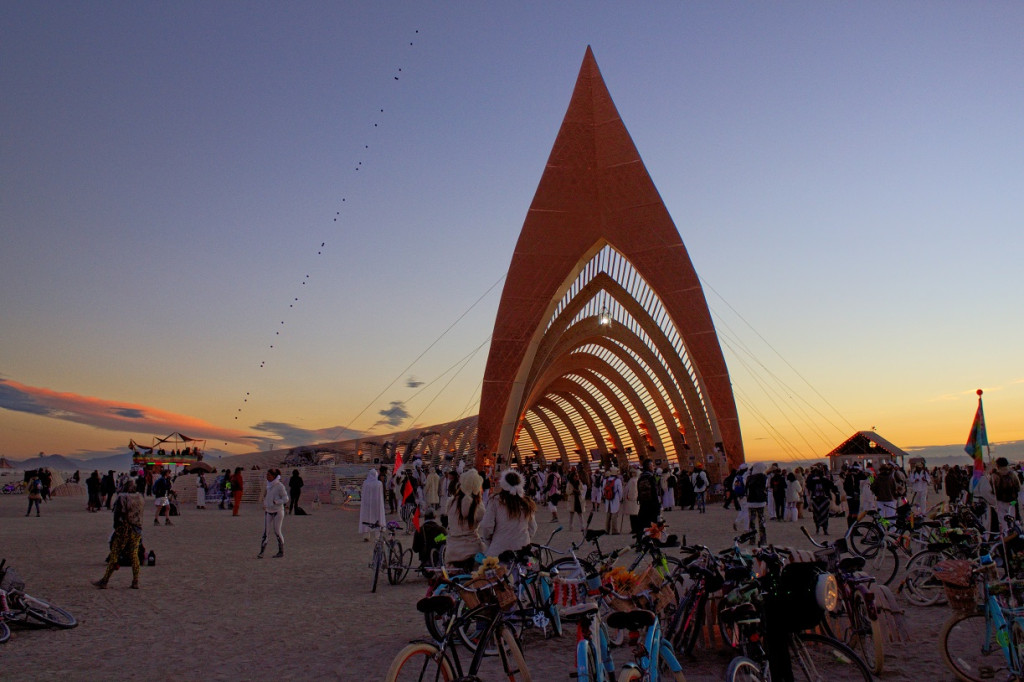 Every year, there is a different temple built for people to visit, and bring mementos, notes, and their memories of those they have lost during the year. Many people sit here and deal with their emotions centred around their losses. On Saturday the temple will be burned. 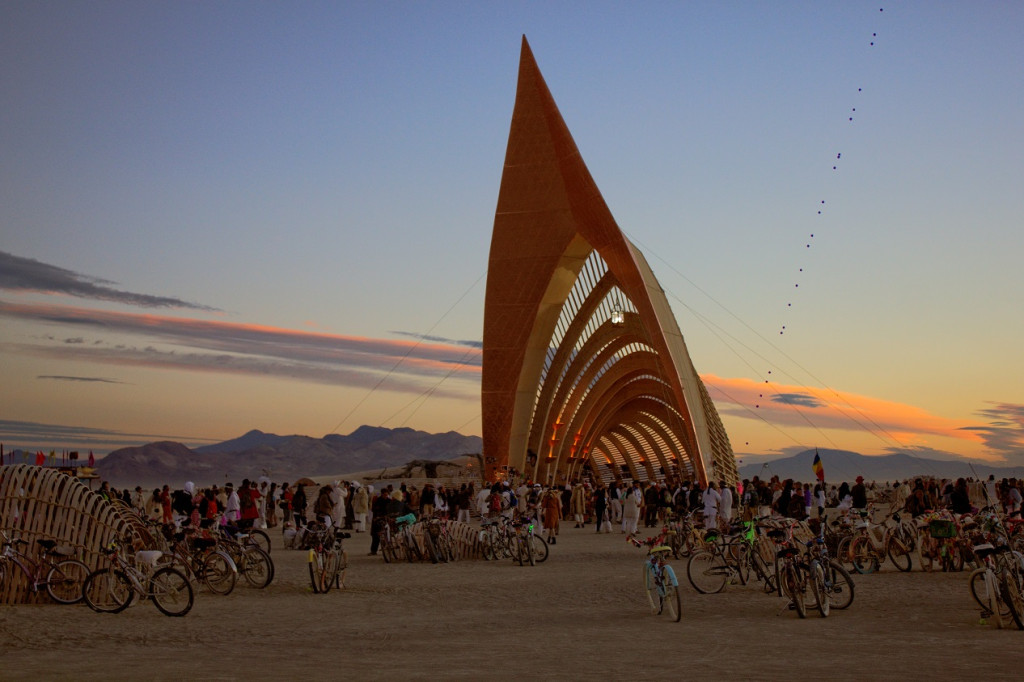 Walking through it, I felt a quiet, cool, serenity. People are very reverential here. I could hear some people whispering, some crying quietly, while others sat still in grief and contemplation. 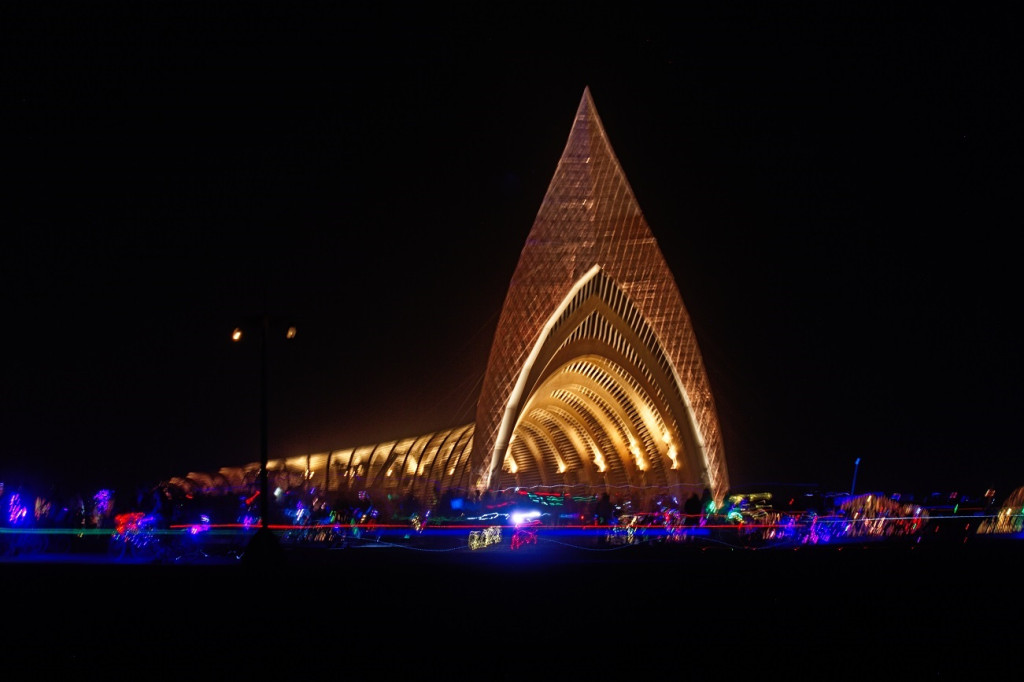 I felt empathy for them but also felt a level of distance from them. I am lucky in the fact I have lived a life without much loss – so far. I don’t like to think about the losses that are due to come along my way in the future. 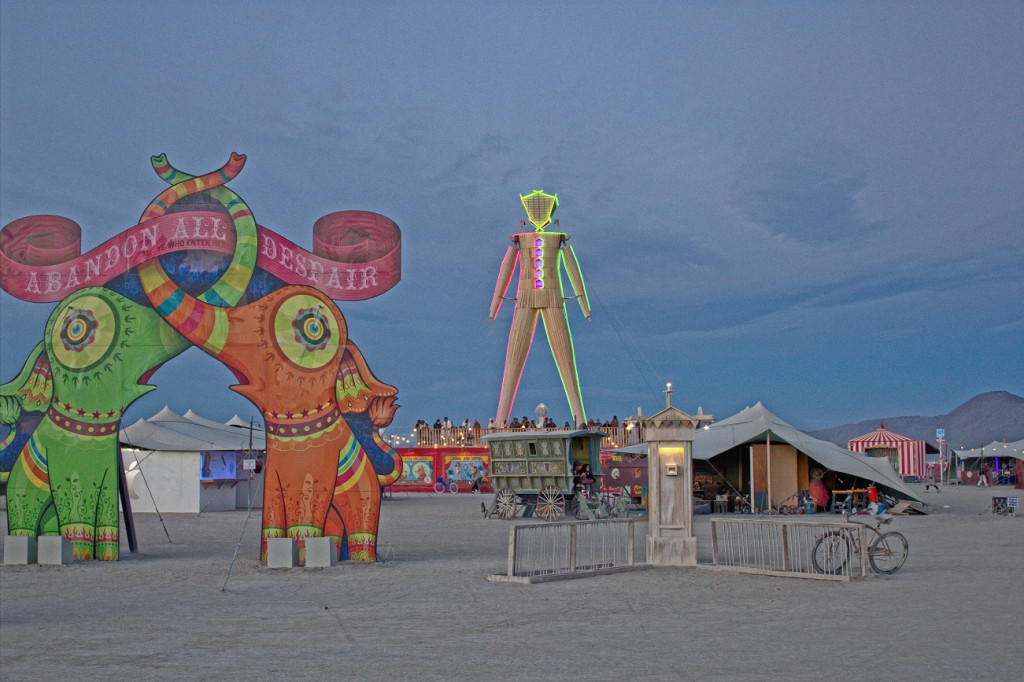 The man was amazing. He stood 60 feet tall, made of wood and lined with pink and green neon lights. 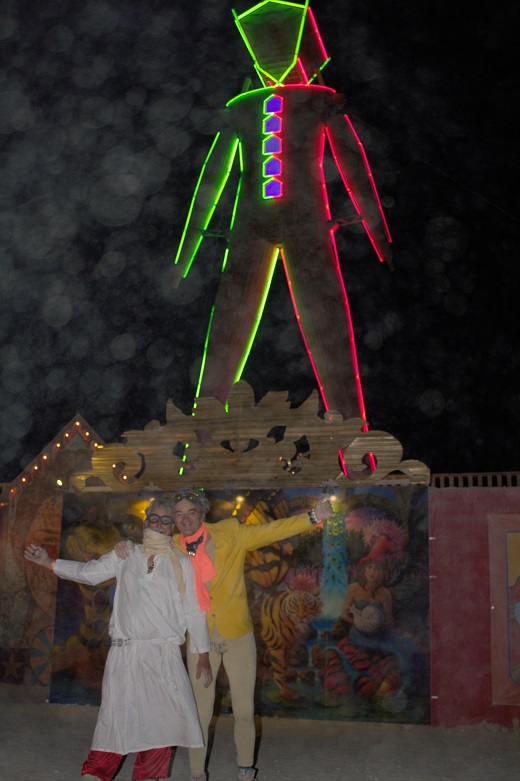 Harold and a random playa friend at a windy moment

Underneath him was a maze and a midway setup like an old time carny show with  barkers, shills, and games of chance. Win a bear, or a sticker. We traded down for the stickers. There was a team making wonderful espresso and a sideshow featuring fire dancers. 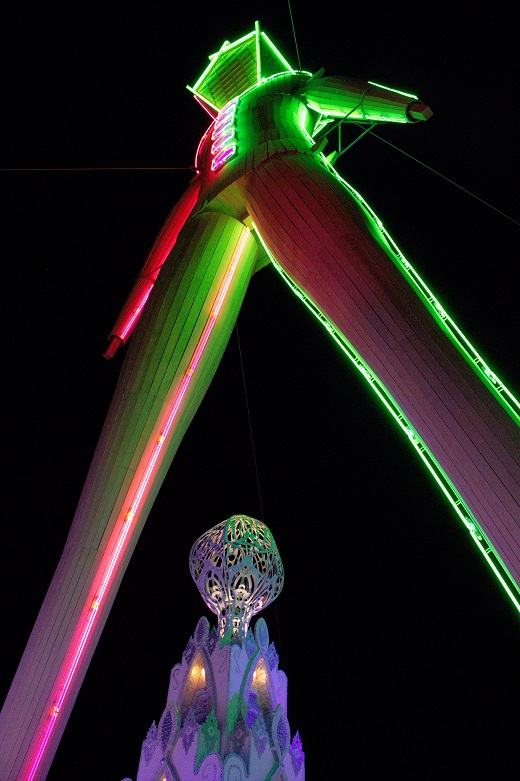 In the midst of the maze sat a beautiful crystalline sculpture, glittering and glistening in the light. Looking up, you realize you are now right under the man. Two walls have curved mirrors, and the other walls have display panels that show photos of burners taken from the mirrors. Taking the stairs up to the balcony gives you a wonderful view of the city and playa. You also get to watch other people lost in the maze below. 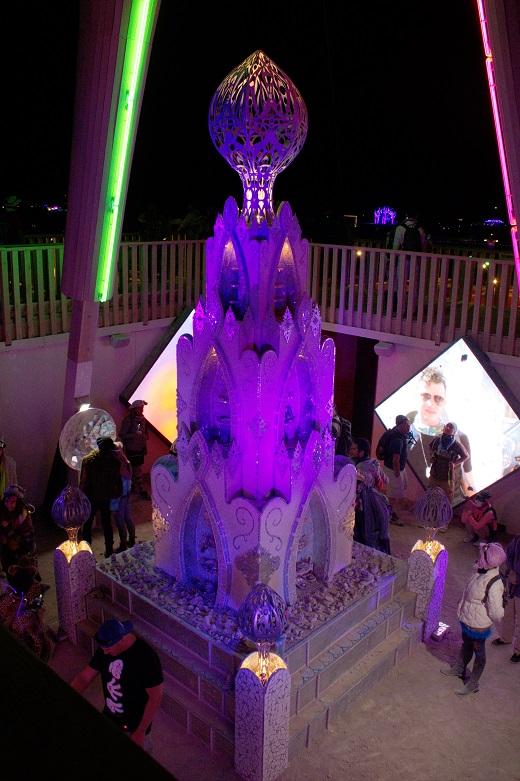 We cycled out as far as we could go on the playa, and then went to the far east side of the city. There were a lot of sand dunes we’d zoom into which would slow us down to a crawl then we’d go full force on the other side. So much of the city was still being developed, and yet so much was already in motion. We cycled back through the city, and as we got down to center camp, I was nearly sent flying by a herd of bikes. That was my first lesson on not going against the flow of bike traffic.

We stopped to check out center camp, where a woman was on stage singing opera. Off to the side were the leather clad minions of Thunder Dome camp (Yes, as in Mad Max). In the center was a very old naked guy doing yoga and two couples practicing poses together. People sit, stand and lay all over the place. The wind is blowing sand around outside but it’s tame in here. It all feels so surreal.

I am silver and exact.
I have no preconceptions.
Whatever I see, I swallow immediately
Just as it is, unmisted by love or dislike.
I am not cruel, only truthful
The eye of a little god,
four-cornered.
–Silvia Plath