I’d read that it was a good idea to buy everything you need well before you hit Reno since 70,000 people descending on the town at once can decimate the stock they have there. That was obviously advice from a few years back. Turns out Reno is more than ready for all the heathens and their – or our – needs.

RVs, moving trucks, and cars pulling U-hauls are all over the town, covered with piles of bikes and gear. Wherever another item can be tied down, it is. We stopped into the local U-haul to fill up our propane tanks the day before ingress and it was packed, but they were handling it. They even had a few trailers left, just in case. 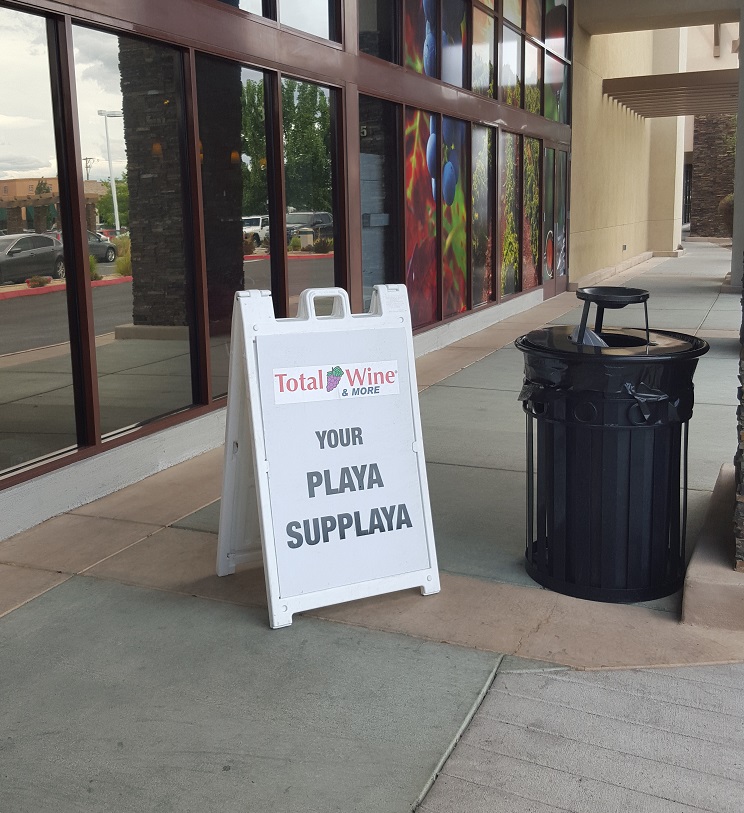 Down at Total Wine we were welcomed with a burner sign outside. Inside, we were welcomed to multiple tables to try different drinks we might like to have out on the playa, including a few named specifically for burners , such as “Playa Pineapple”. We only needed some ciders and Fireball whiskey, but we ended up buying much more – “just in case” and also because I got caught up in the spirit of the thing.

Over at Whole Foods, the pre-Burn party continued. Every aisle had someone giving away samples of something every burner would need – about half snack foods and the other half alcohol. I made sure to sample everything and ended up getting half soused. Harold made sure we didn’t buy anymore alcohol, but I was done with that anyway. I was all over the wonderful assortment of vegan food. Say what you want about Whole Foods – yes, they are expensive and yes, some of it isn’t worth it – but they are a vegan/vegetarian nirvana. 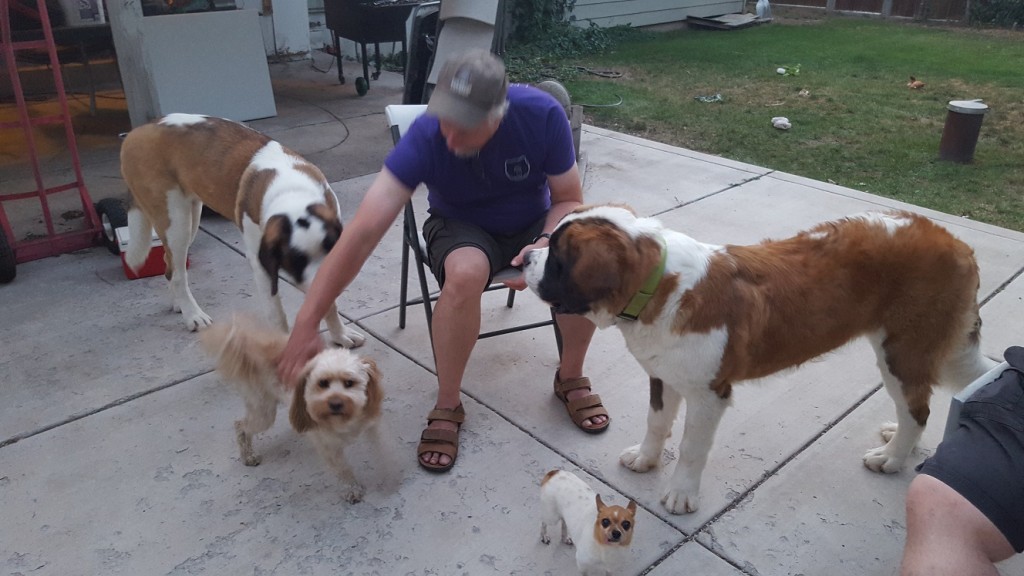 The Grand Sierra Resort has an RV park and a special on rooms before and after the burn with great rates, and pool parties. We opted to stay with a friend I’ve known since grade 3 but only recently been back in contact with. We parked the trailer in her driveway and spent our evenings with the two of them and their two dogs, Charm and Pink. The Saint Bernards were particularly enamoured with Toonie. I expect she is the smallest dog they’ve ever seen. They are definitely the biggest dogs she’s ever seen.

On Sunday, we planned to leave early. The gates opened at 10am, and it was a 3.5 hr drive so if we left about 7, I figured we might be right on time. I knew that it would then be a longish wait to get in, based on prior years reports, so I expected we’d get in maybe early afternoon.

We got off to a late start, after sleeping in, moving slower than planned, and having to get the dogs to the boarding kennel. It was so hard to leave Teddy and Toonie. The woman took their leashes from us and they started after her, then suddenly stopped and looked back. Their eyes bored into me in horror “You’re leaving us?! You can’t leave us! Where are you going? Take us with you!!!!” I felt like such a bad Mother as we raced out the door and left them behind. 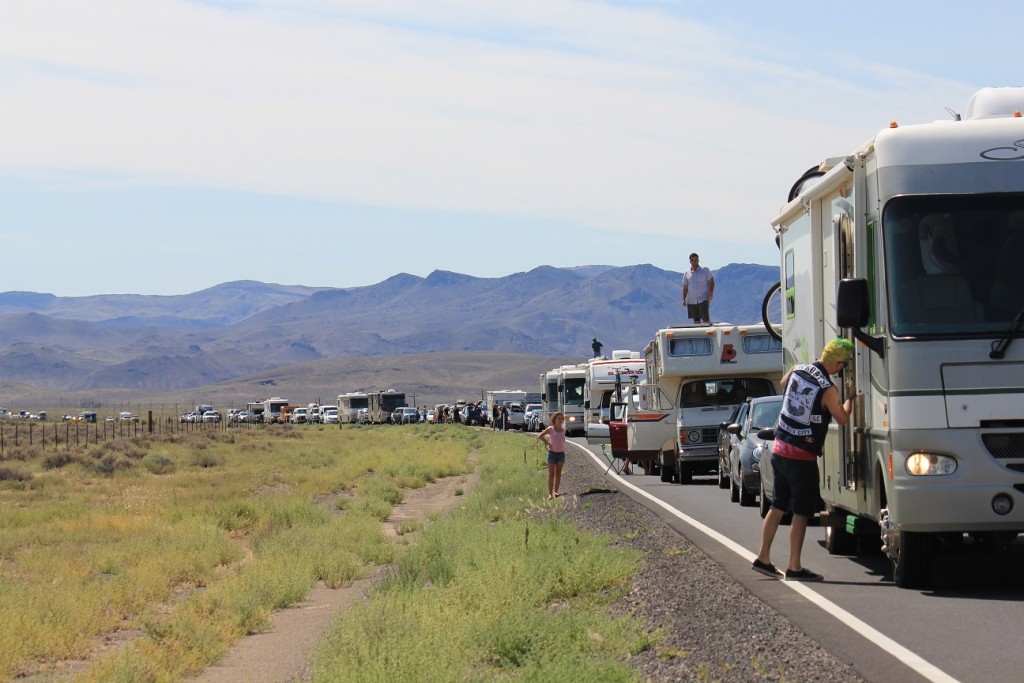 It was about 11am when we finally left Reno, and noon when we hit our first traffic backup, 81 miles from Burning Man. At 1pm we’d gone 9 miles. I quickly worked out, at this speed, it was going to take us 9 hours to get there. We laughed at the ridiculousness of that. No, this was a temporary slow down. As an ambulance went screaming by us, we felt better. There was the problem.

Now it would have to speed up – and it did for a while. We did 12 miles the second hour, and 15 the third. Then we actually had some times when we were  getting 20 miles without a stop. Eventually though, the longer lengths would be broken with longer waits. 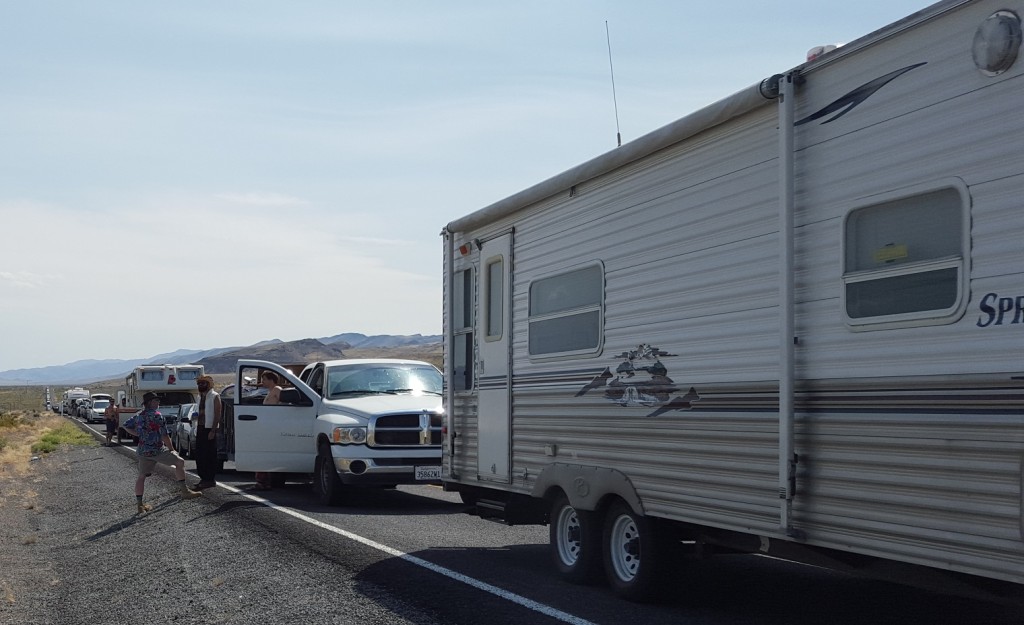 We got to know the people 5 cars ahead and behind us quite well. People got out to throw balls, set out chairs, smoke, and socialize. As soon as the cars would get ready to go ahead, you’d hear people calling back “We’re moving!” and we’d all go running back to our cars again. 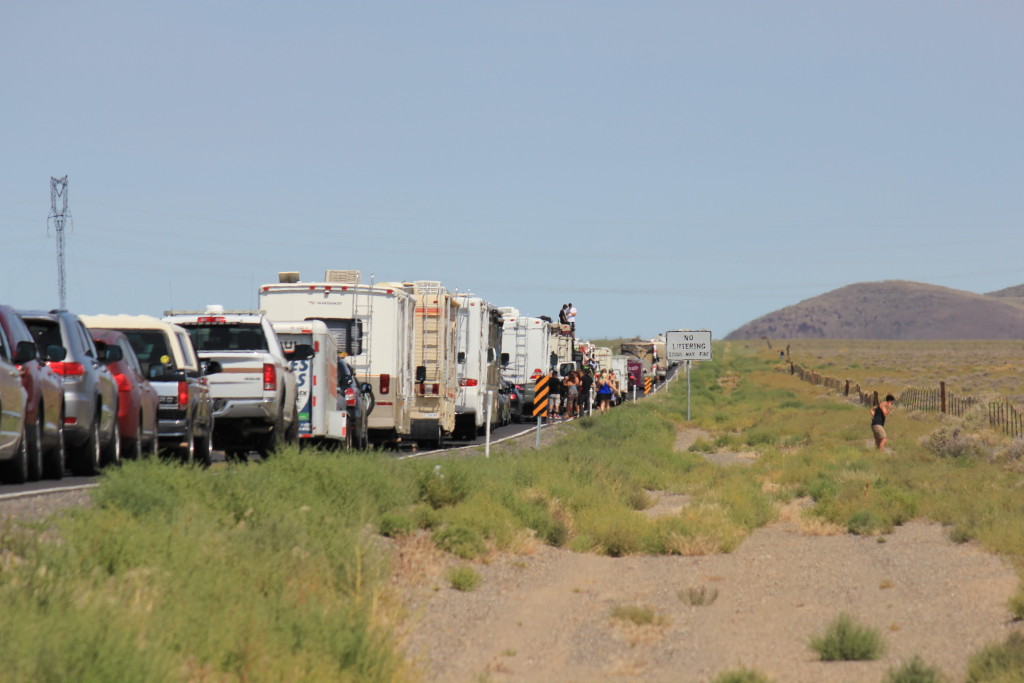 At Empire, a lot of people stopped to shop at the little store, and Gerlach had more going on, even a little fair. The lights and neon clothing I could understand selling but why would anyone wait until this far in to buy necessities such as water and food? Then there were the people sitting with signs looking for tickets to buy. 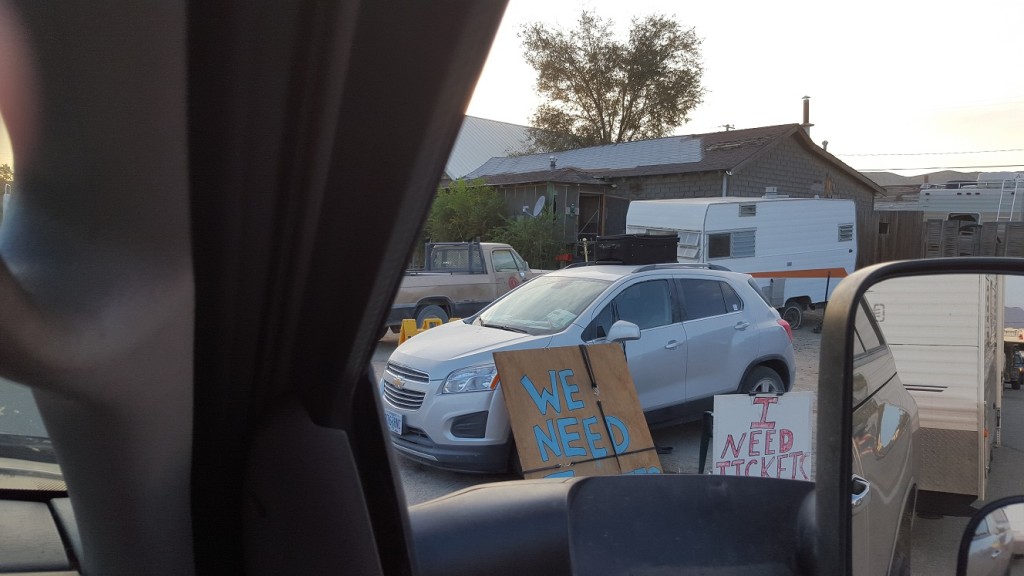 Once through Gerlach, Black Rock City looked so close on the map. I figured we were just about in. This was about 6:30 pm. It would take us another 5 hours before we were at our camp. 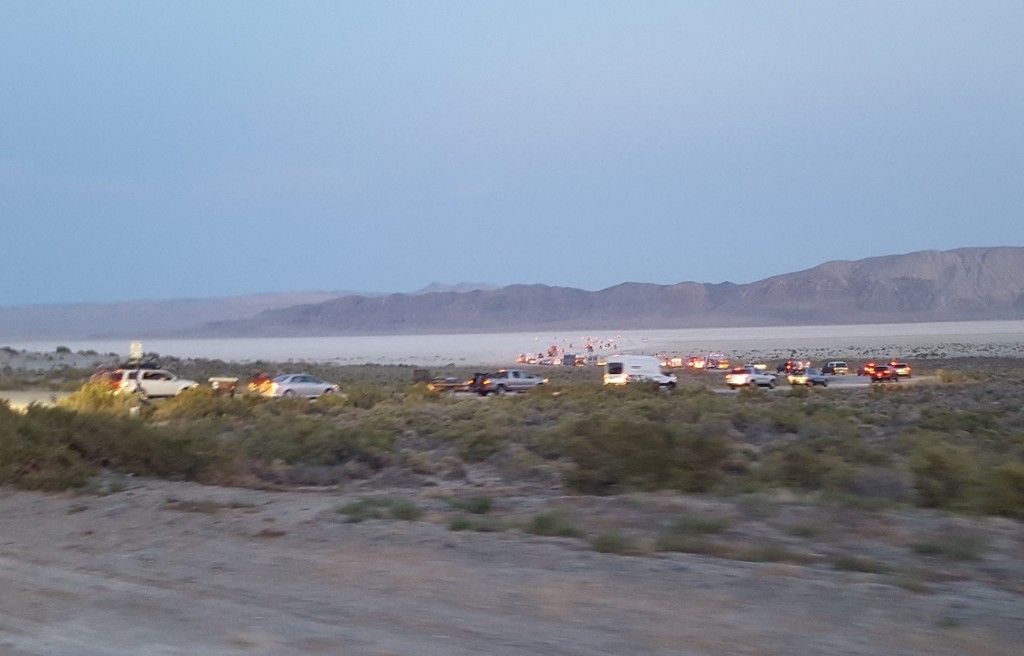 We turned off the two lane highway onto the playa, where we now had 6 lanes to spread out across. The speed limit decreased to 10 mph, and we’d been warned many times to stick to it. The police were watching and would stop and ticket anyone going faster. As we waited at one point, a man came up and tapped on our window, asking if we wanted to buy a ticket. It seemed like a strange place to be selling, and I told him he should go back to Gerlach as we’d seen people back there with signs.

We chose the lanes on the very right since most people seemed to pick the lanes on the left. We soon realized our error. Our lanes were so much slower because we were on the outside curve and we had to let all the cars going off to Will Call, cross in front of us, and then let them merge in again. Next time we’ll play that part smarter. Stay left! 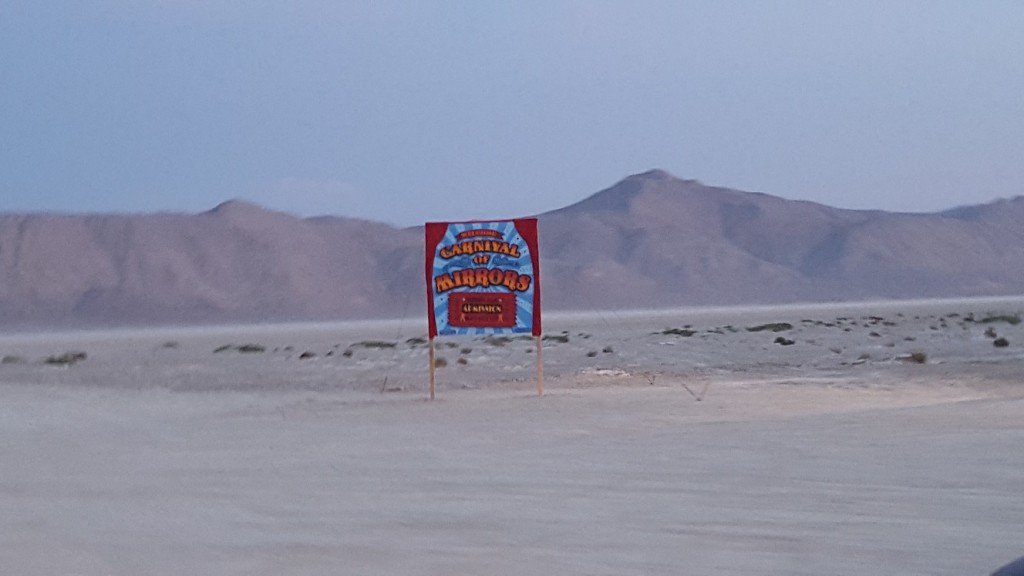 After the traffic split at Will Call (we heard that can take an extra 5 hours, so we opted to pay extra to have our tickets mailed to us), we had to have our car pass scanned, and show our tickets. Just before we finally were let in through the gates, it was time for our welcome and initiation.

The greeter asked us “Is this your first time?” and even though I knew better, I found myself saying “Yes!” I couldn’t start our burn off with a lie, now, could I? I knew this opened us up for initiation. It involves taking off as many clothes as we felt comfortable with, rolling around in the dust, and making ‘playa angels’. The greeter hugged us tightly (Playa hugs are never weak or wimpy – it’s a meaningful sort of thing. I am pretty much hug aversive with most people so I was surprised to find it was actually a pleasant kinda thing) and said exuberantly “Welcome home!” 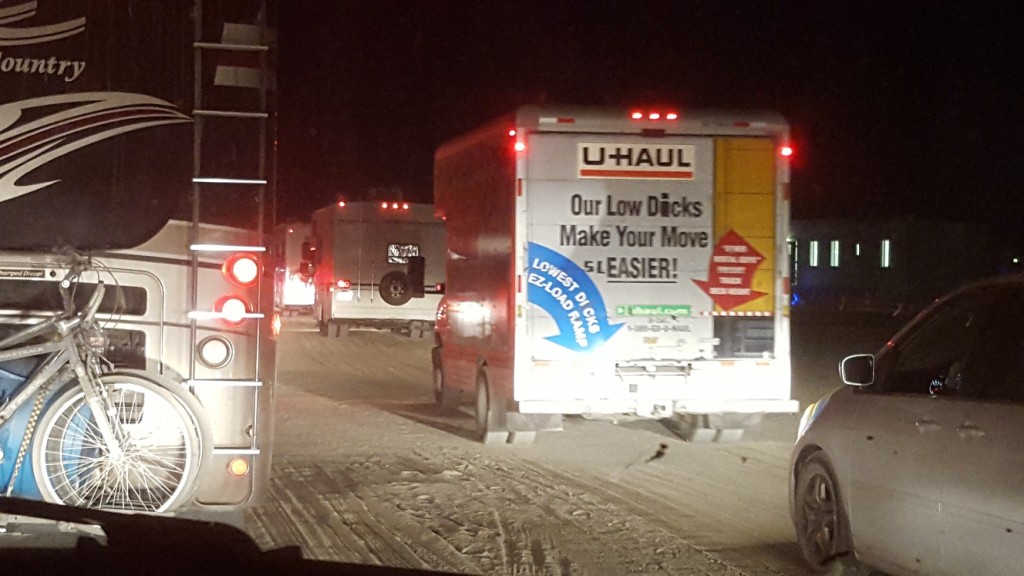 Then we were through the gates. It was dark and sand was blowing around like we were in a snowstorm. We could only see a short way in front of us as we circled over to the west side of the city. The city is plotted out like a clock. The streets go around the pattern in times – from 2:00 to 10:00. The front street is named Esplanade and the other streets go out alphabetically, starting with Arcade and ending with Laffing Sal. (We won’t make it out past I the whole week. Most things happen in the camps closer to the Playa.) Our camp is in an excellent location, 7:45 and Freakshow. 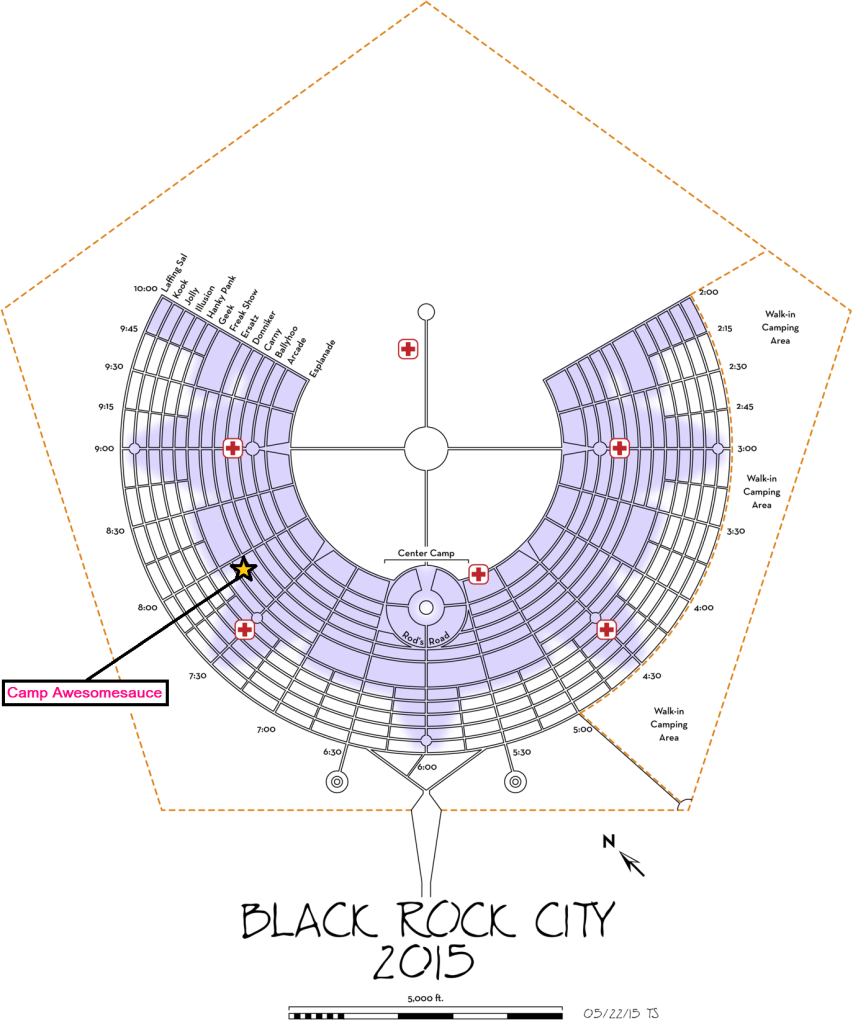 We didn’t know anyone in our camp, except through the Facebook group I’ve been a part of since we tried to get tickets in 2014. They didn’t hesitate to include us and it was so great to know where we were headed to. If you’re not part of a camp, they send you off to some forsaken corner out in the nether regions to fight to the death with other heathens, for a tiny little plot of land to live on – or so I’m told.

Turning into the city streets, we were greeted with utter insanity. Lights and flames everywhere. Bikes blaring by, and some monstrous art cars. There was music coming from every direction, loud, booming, both at odds and yet blending in with each other. We circled the block twice before we stopped to ask directions – and then it turned out we couldn’t see the camp because the guys who had come in, in front of us, were blocking it from view with their RV.

Everybody came out to welcome and hug us. “Welcome to Camp Awesomesauce!” Again, these were meaningful long hugs and they were kinda nice and pleasant.

We pulled into our space near the back of the camp, and set up quickly, then began to get our lights on our bikes so we could go exploring. Mid-decorating, we were invited to walk over to one of the bars a few blocks over. The bikes could wait until tomorrow, we figured. 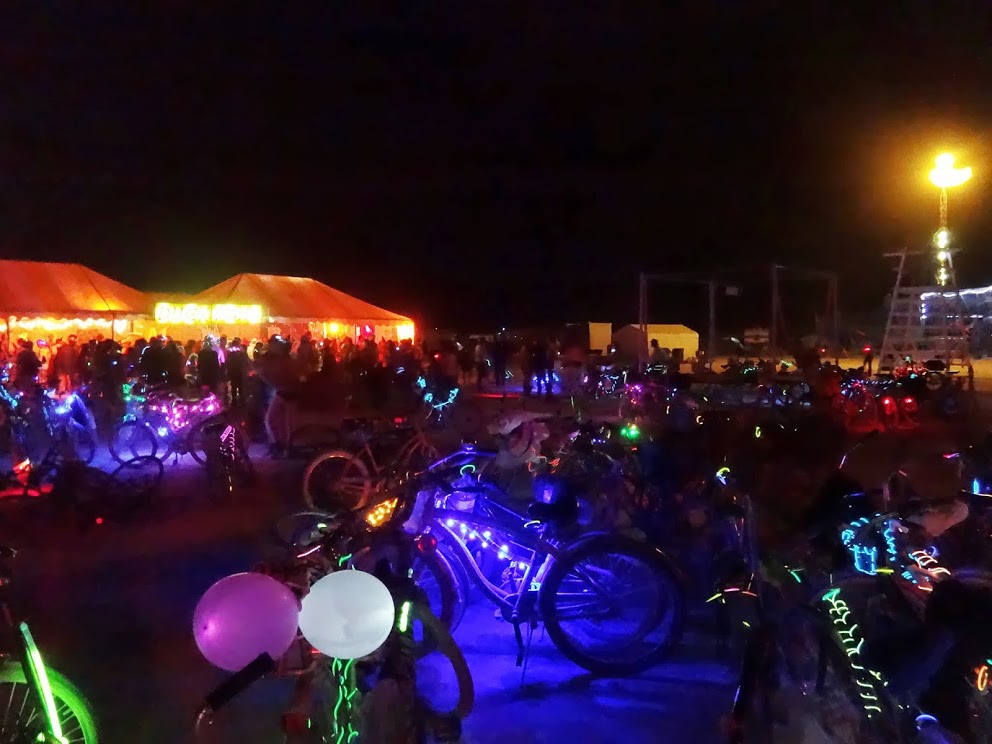 A group of 7 of us headed over to the Duck Pond, where we were treated to a feast of fake fur and lit up costumes. After IDing us all (thank you!) We were given a choice of something called a Duckade or PBR (the unofficial Burner beer – and I quickly learned why: it’s cheap, tastes pretty good, and is very refreshing on a hot, sandy day). You’d expect that given the drinks were all free, that they’d be watered down nothings, but no way was this duck skimping on it’s pours. The drink was both flavourful and packed a punch. One drink had me already feeling a little loopy. 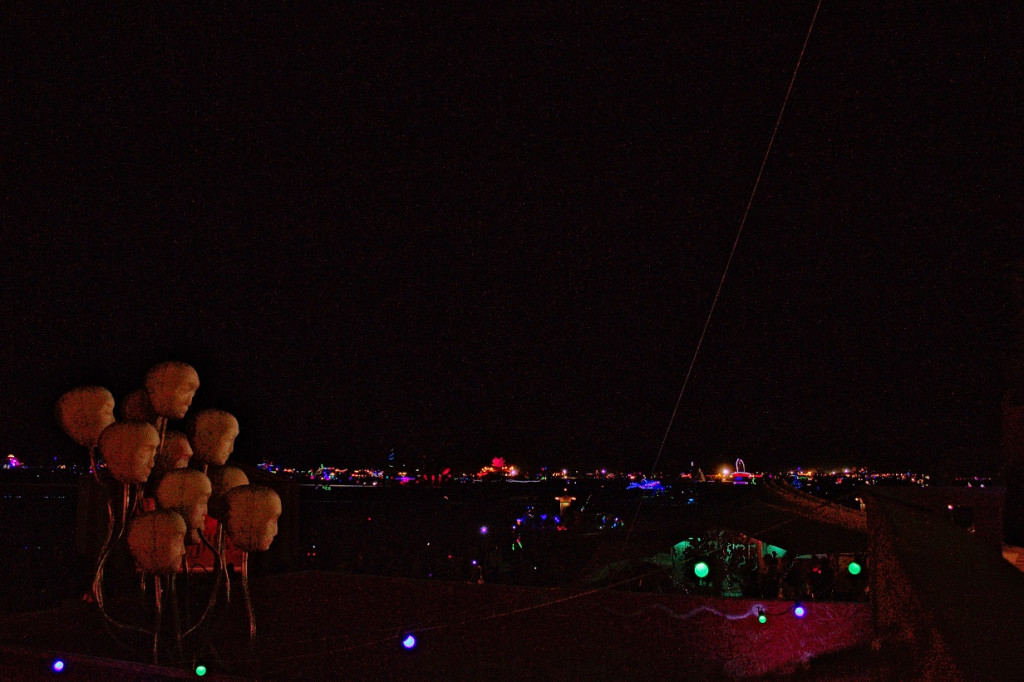 After a couple of drinks we decided to walk down to the Playa. Our group had picked up a new guy and lost two others. We learned why bikes are a great idea for getting around out there. This place is the size of a small city. There is so much to see and long blocks of different camps and roads to get places. Looking out at the Playa, it was a sea of lights. It was overwhelming and made me feel very small, in the midst of a huge, huge place with so many things to discover. A lot of the camps were still getting put together. Everywhere we looked, there was a flurry of action, laughing, music, lights, and excitement. Man, what a week we were in for. 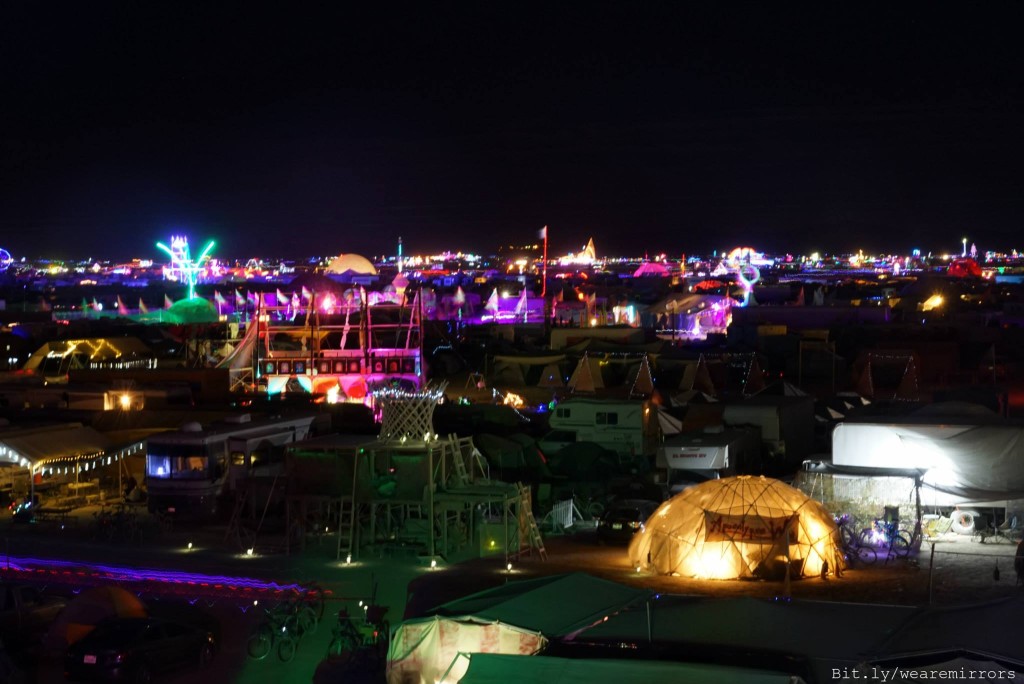