Tonight is the big night! The man is gonna be burned to the ground! But more on that later. It’s also “Socially Appropriate Eat-With-Your-Mouth-Open Day”. Did you know that the more oxygenated your food is, the better you taste it? That’s why ice cream tastes better with a fork than a spoon. I experimented with this only while I was alone. There are just some things too engrained in my upbringing to cast off so easily.

All the night photos on this page © Duncan Rawlinson.
Check out his web site for many more amazing photos.

We showed up early to another of Desperado’s events. If you’ve been reading all my Burning Man posts, you might remember that we went to his Neuroscience and language event on Thursday and enjoyed it immensely. This event was Head to Head,  formal debate theory and rhetorical strategies. There was only one guy there when we arrived, and either Desperado or the Burning Man book were confused because he started a half hour early. By 11:30 the room was packed and he had to start over with many of the concepts. I enjoyed debating when I was in high school, but there was no way I was going to volunteer when he asked for debaters to stand up. Interestingly, though women made up about 25% of the audience, it was all men who stood up and took part. I wish I could say I found my female mojo and stood up for our team, but I was as much to blame as all the other estrogenites. 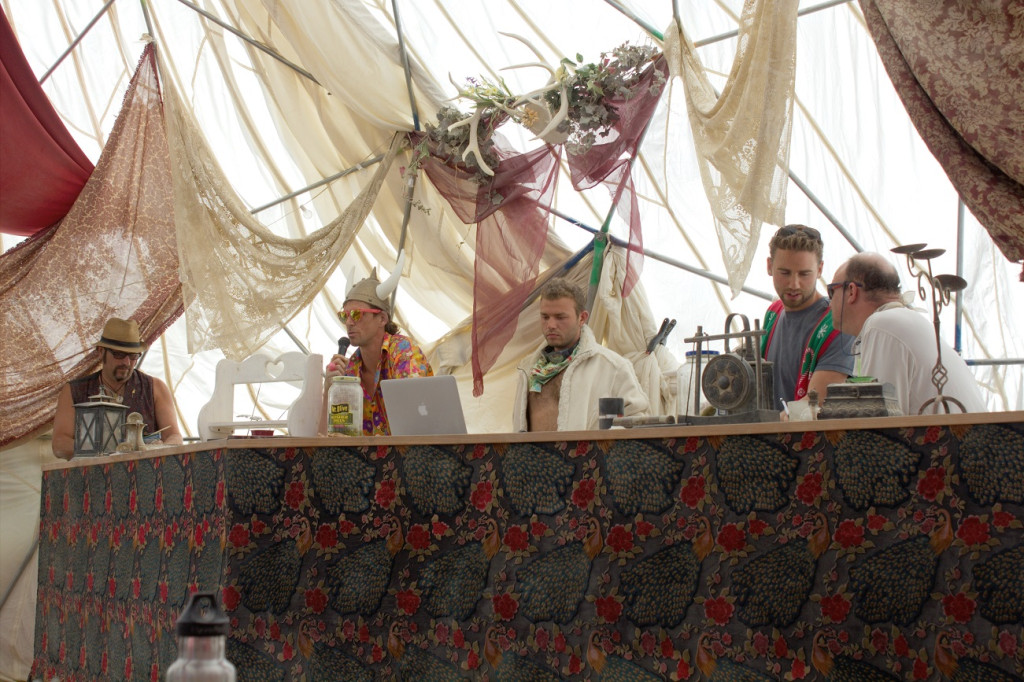 The two debates were very enjoyable. The topics were “Some people on the Playa every year are killed by unicorns. Should we kill them to save the people?” and “Should all drugs be legal?” This left the debaters room to make up facts and information, but they were smart enough to make it amusing and also be able to come back with good, logical responses to the other side. I ended up enjoying this event even more than Desperado’s first.

I have no idea what we did the rest of the afternoon. I know there was a bbq with veggie burgers, and I have a bunch of events circled, but I think we mostly just hung out at camp. Going back through the book this week, looking at all the events we missed, I feel a little reverse FOMO (Fear Of Missing Out). There are so many things we didn’t do! But as Harold has pointed out to me, we had the best time of our lives, the people we met and the things we chose to do are what made it so great. Still, my little inner voice is telling me we’re gonna do it even better in 2016! 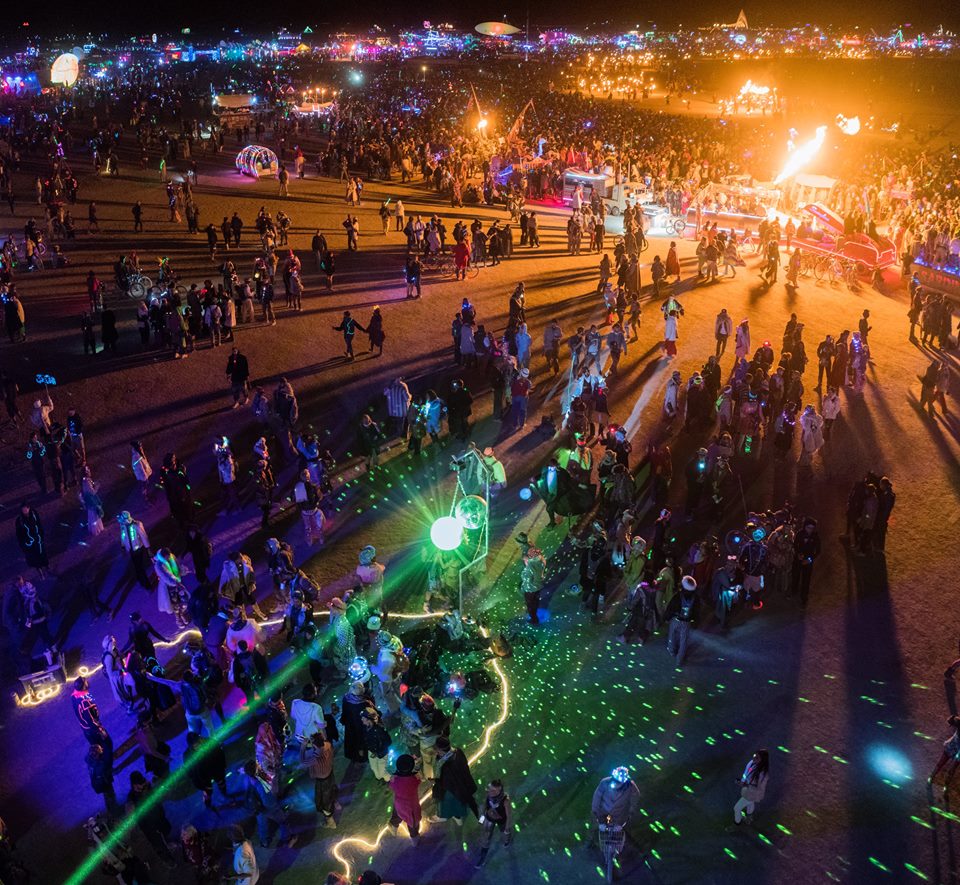 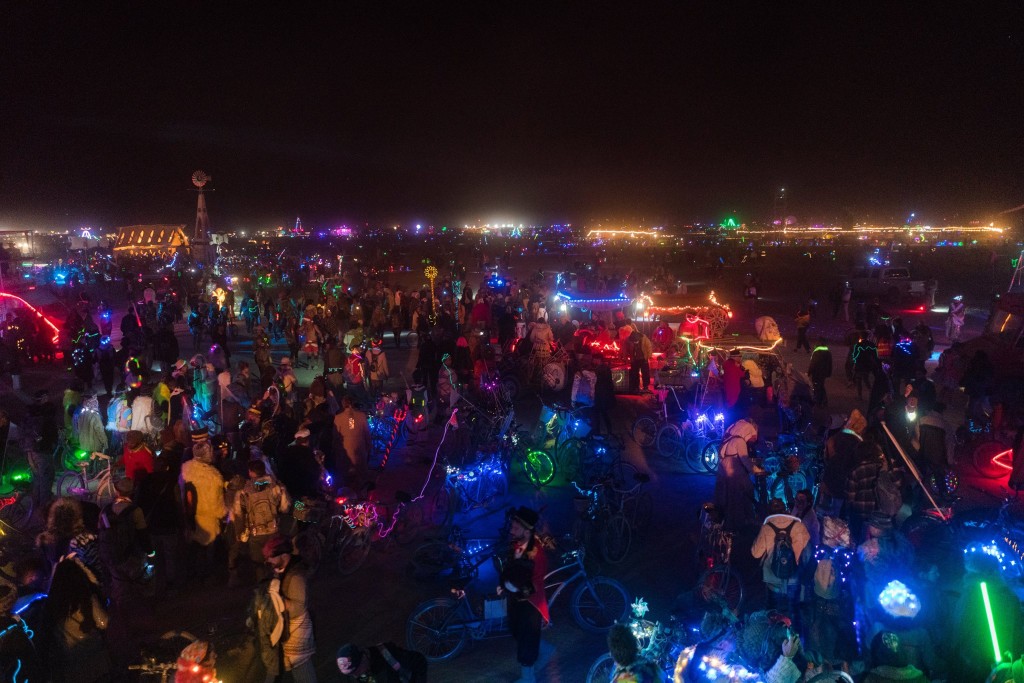 The burn was set to start around 9pm that night, but times can be changed based on the weather, wind, etc. We were lucky to have a calm, warm evening, and it was an insane thing to show up to, with so many thousands and thousands and thousands of people and art cars. It was a kind of organized chaos. There is a large ring of lights all around the man, put in by the L3K camp who were our neighbours and helped us get our spot this week. Everybody had to be behind the rings of lights, and behind the legions of fire spinners. Behind all of us was a ring of art cars, full of viewers. 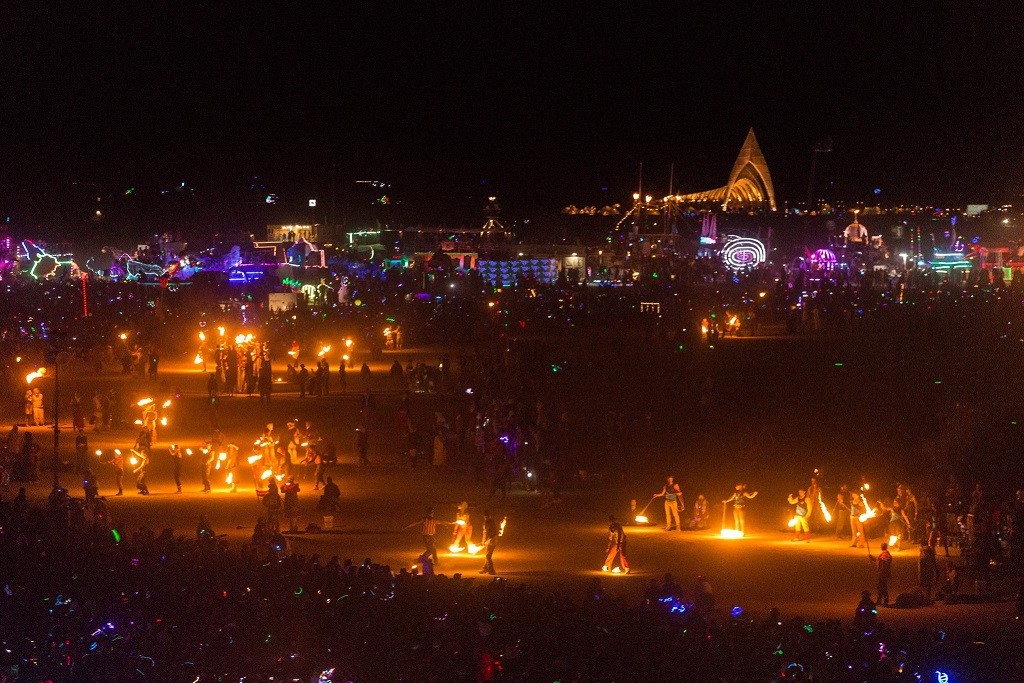 We got in fairly close and stood there with the droves of people, and when it started, those in back were yelling at everyone to sit down. Woe be to those few who refused. They all eventually sat down, shamed by the masses. 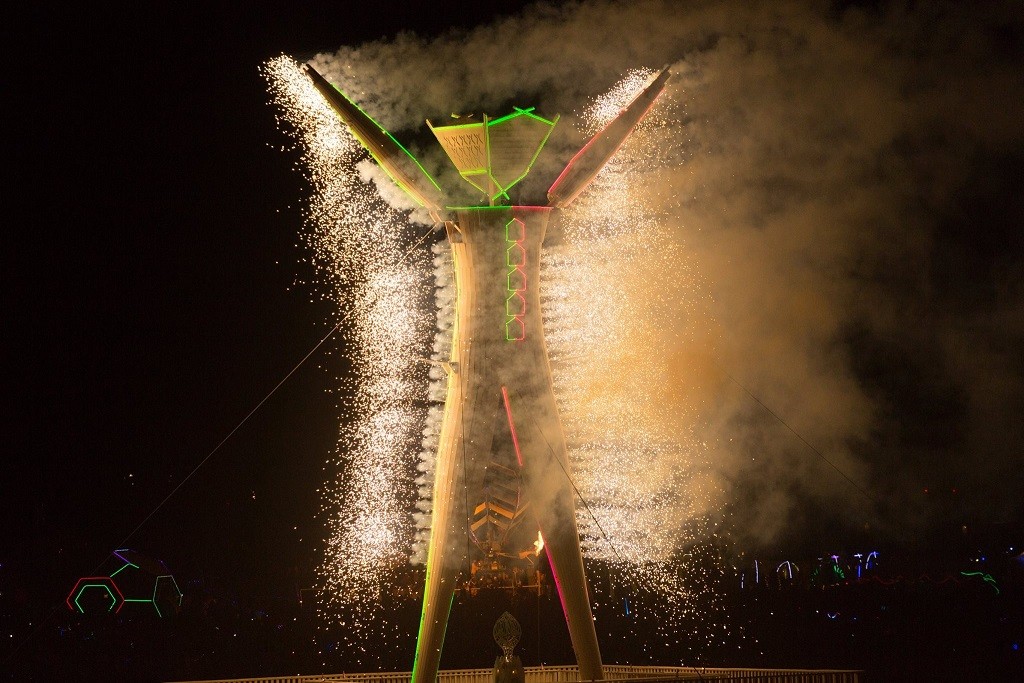 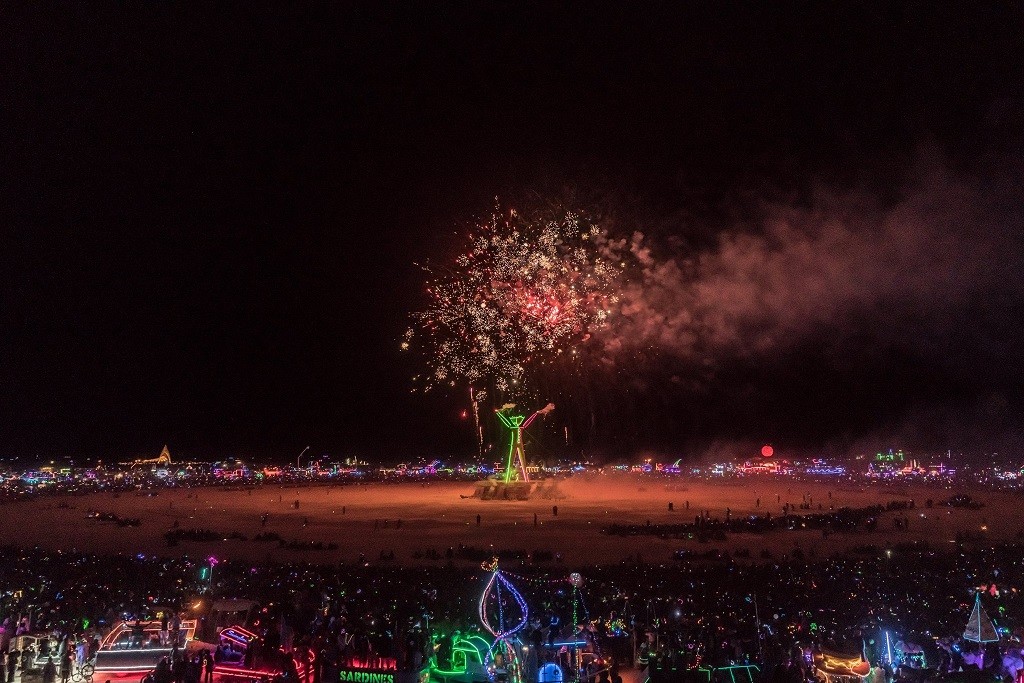 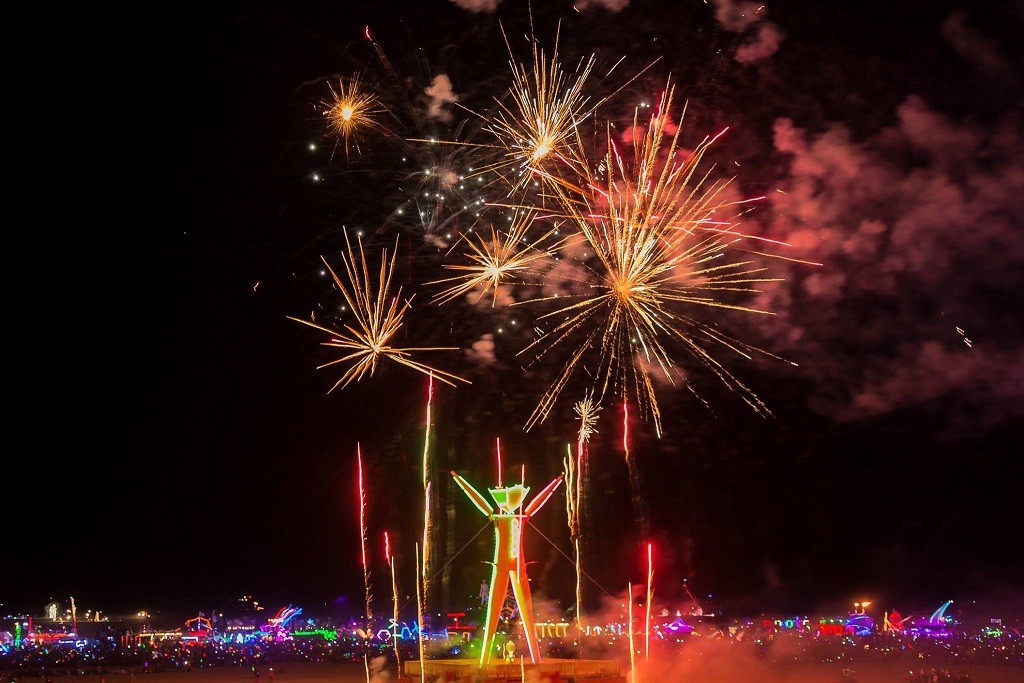 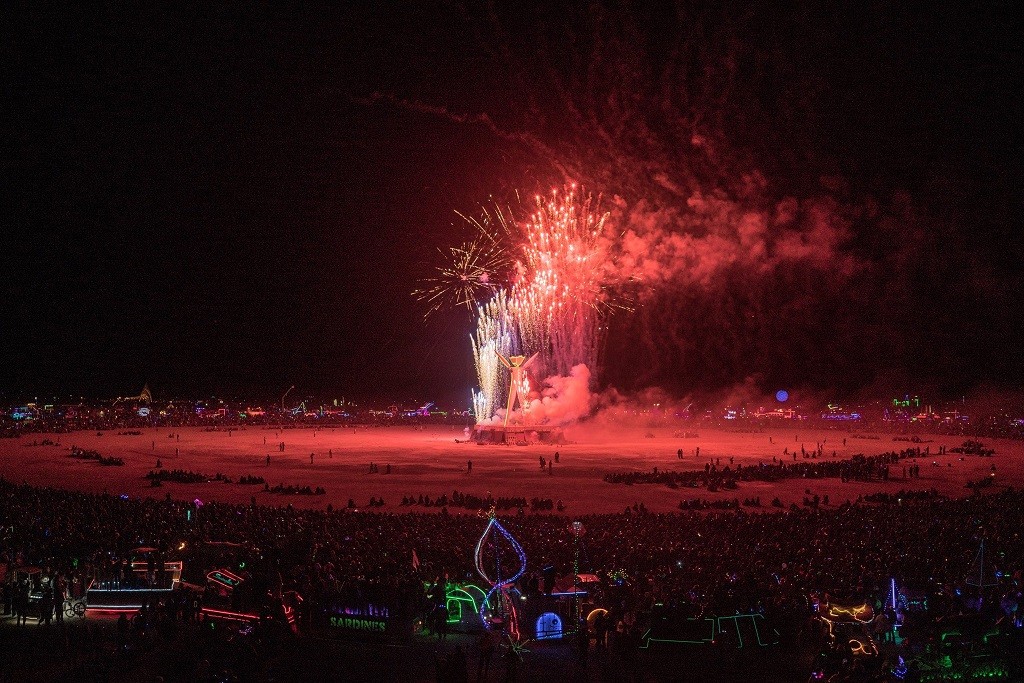 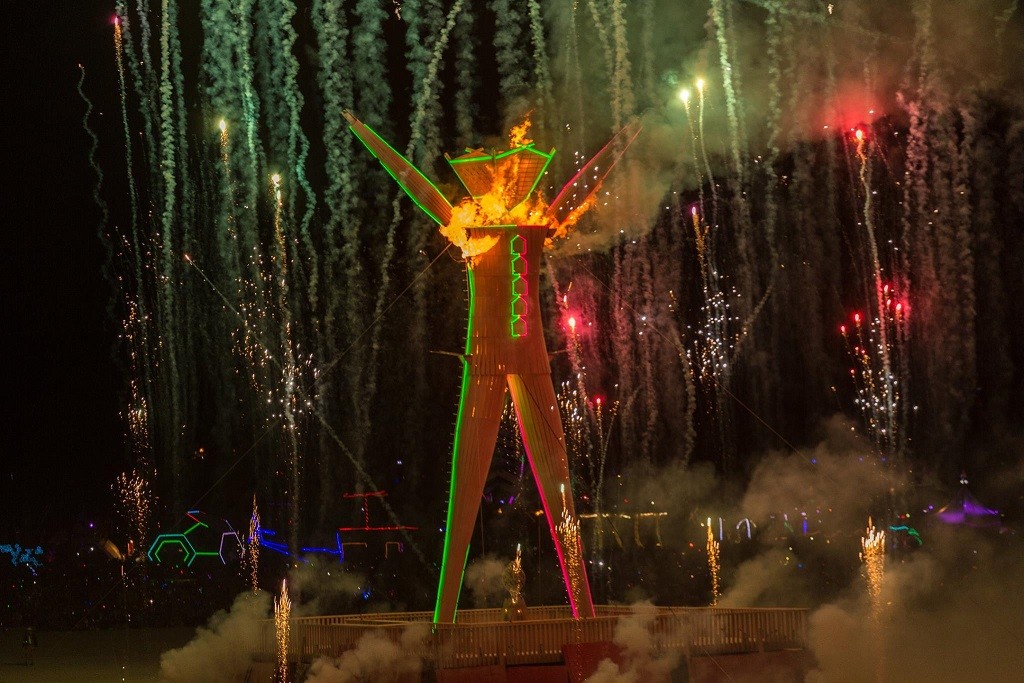 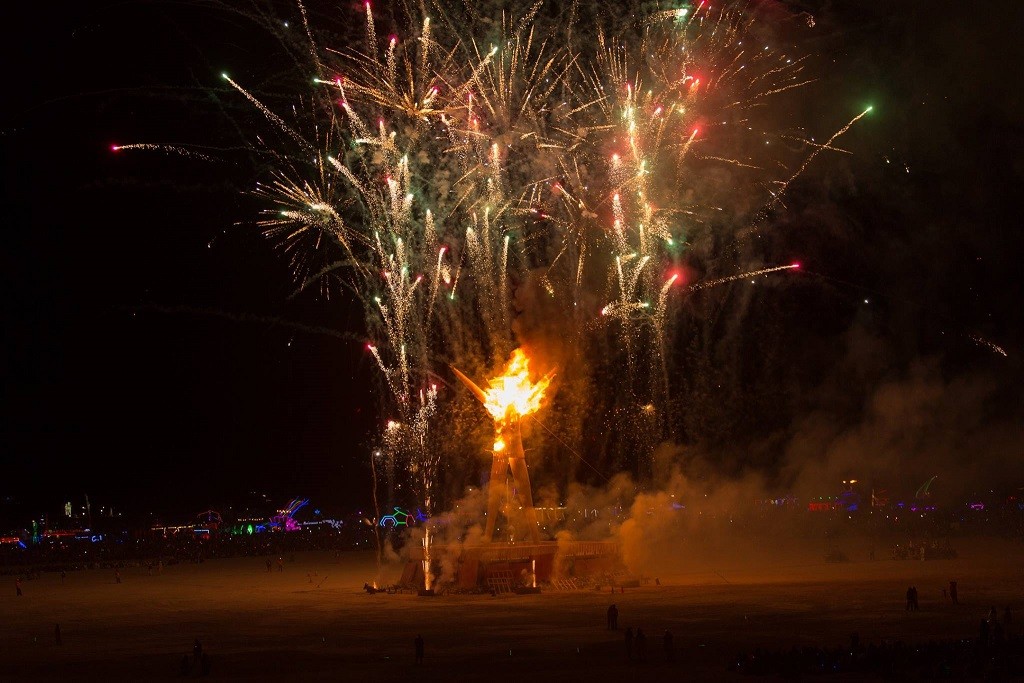 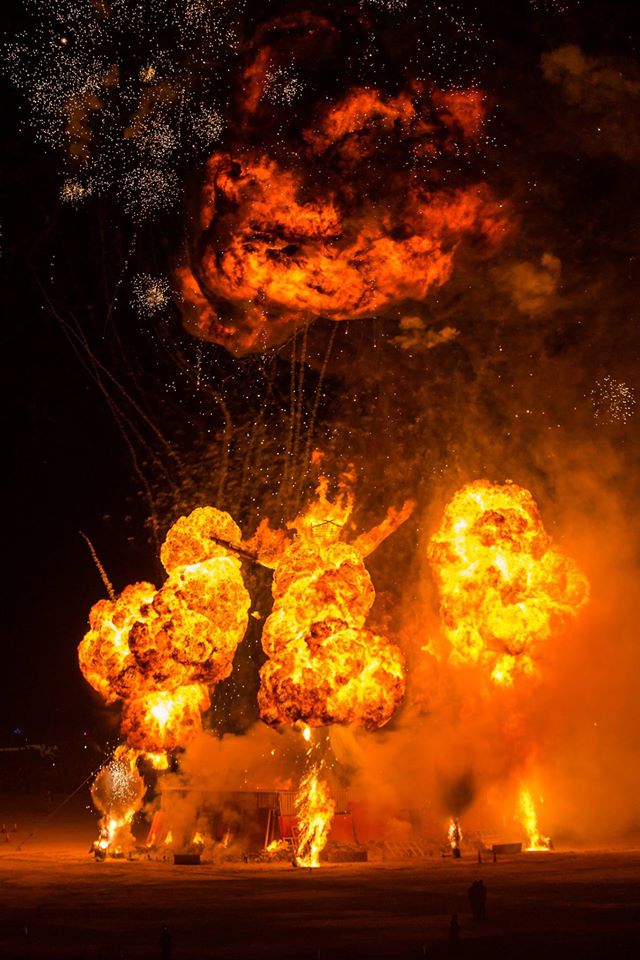 I had expected the burn to be pretty amazing, but was unprepared for the spectacular show we were about to see. It started with amazing fireworks that built to a crescendo, then the man began to burn, and went up more and more until there was a huge explosion of fire and the crowd roared, and the lights and fireworks died. I felt a wave of excitement go through me, as I found myself raising my fist to the sky with everyone else. It was a deep, visceral feeling, at the very basic core of my humanity. It was like watching the Death Star explode. 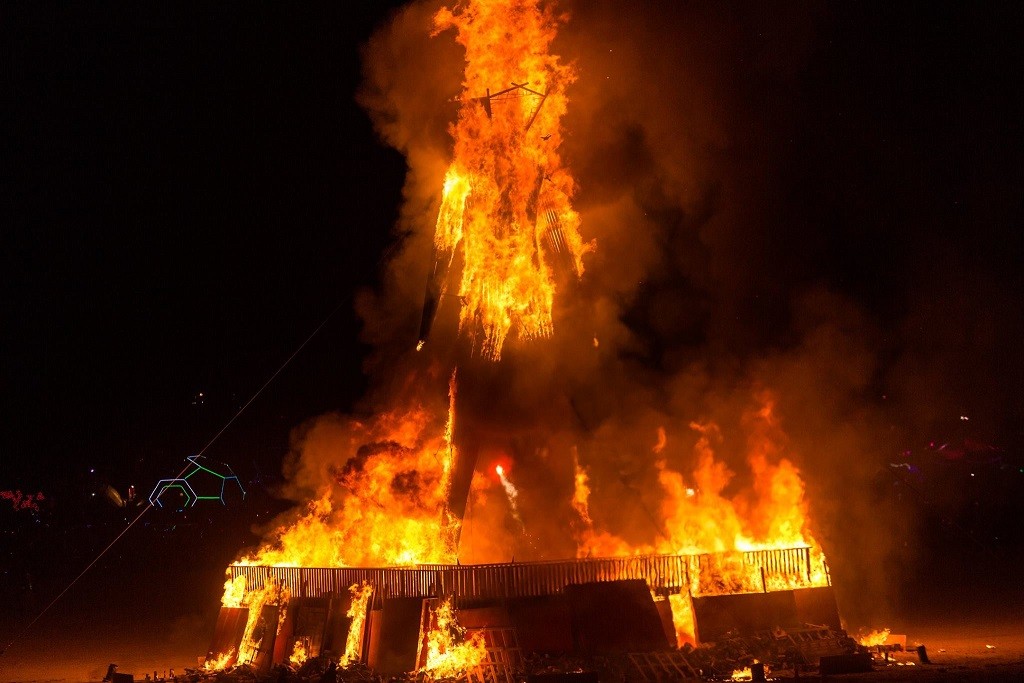 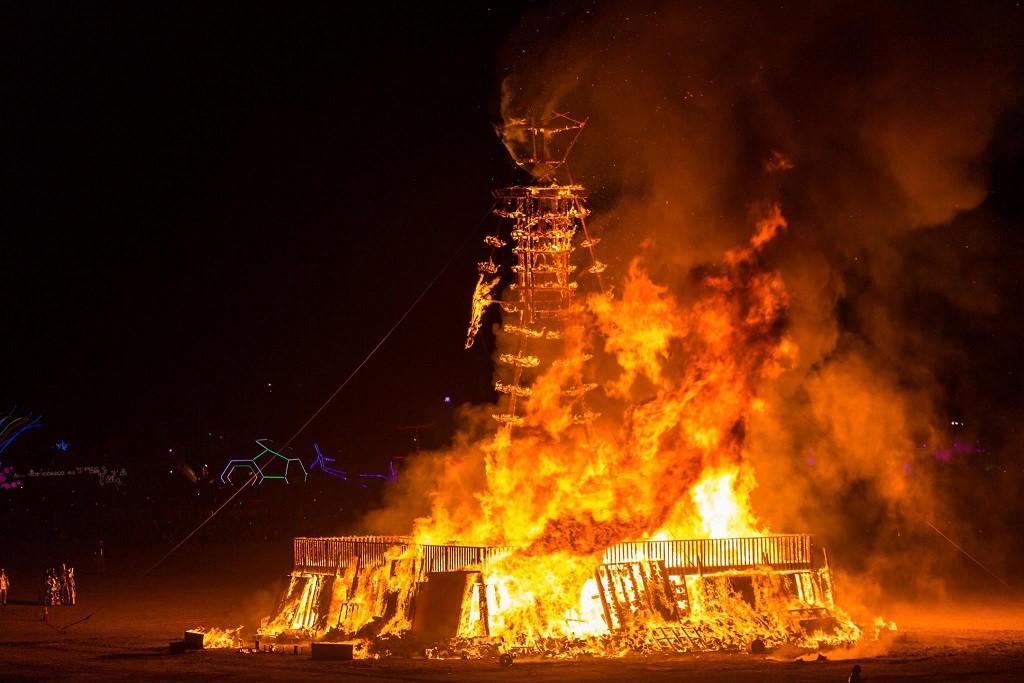 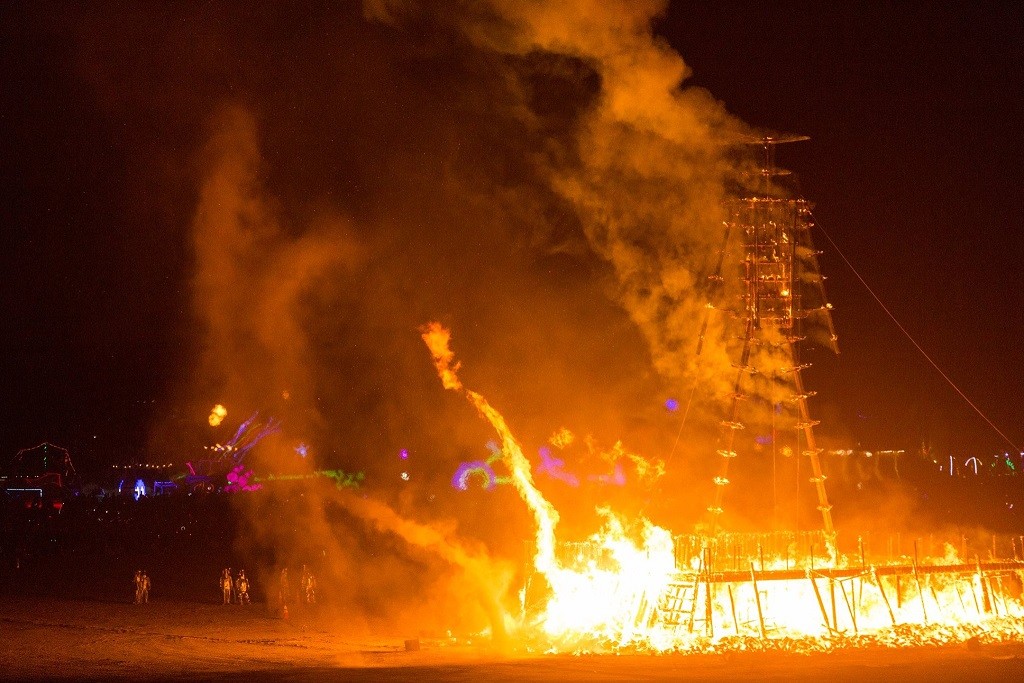 It took a while for the man to fall. He was a tough one, but not as tough as last year’s, so we’ve been told. His innards were alit and glowing for a good long while and many started to grow impatient with sitting on the hard ground so long. They got up and tried to walk out, and I grew concerned I’d have some big butt in my face when he finally fell. Fortunately, I had a perfect view as the skeleton collapsed, and the crowd erupted with a final roar of approval. It was the best pyrotechnics show I’ve ever seen! Can’t wait until next year! 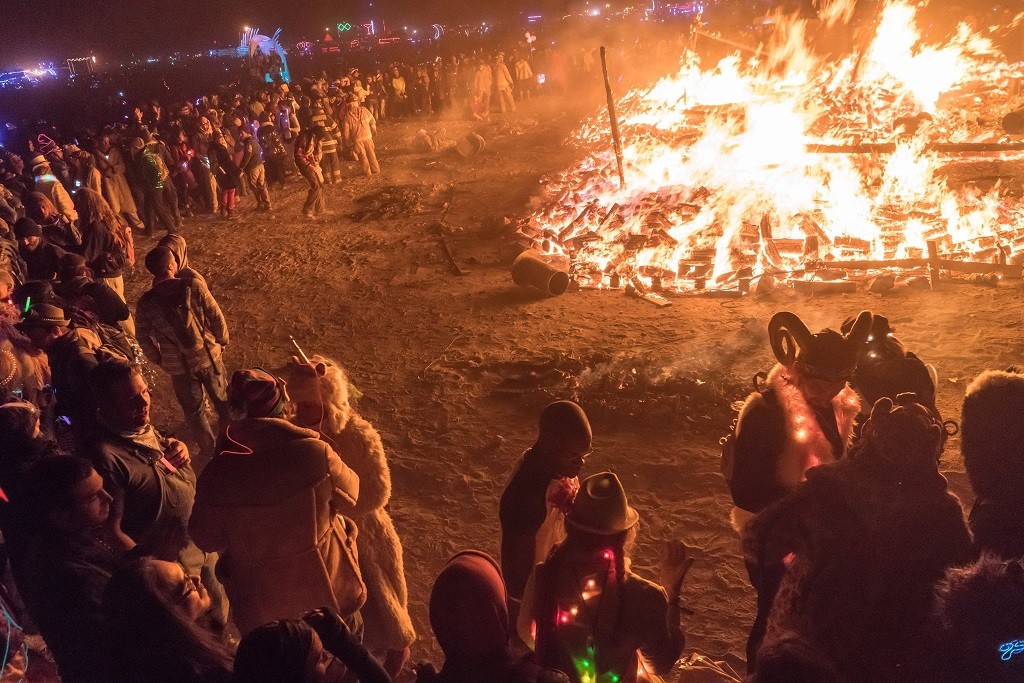 All night photos on this page are  © Duncan Rawlinson.
Check out his web site for many more amazing photos.