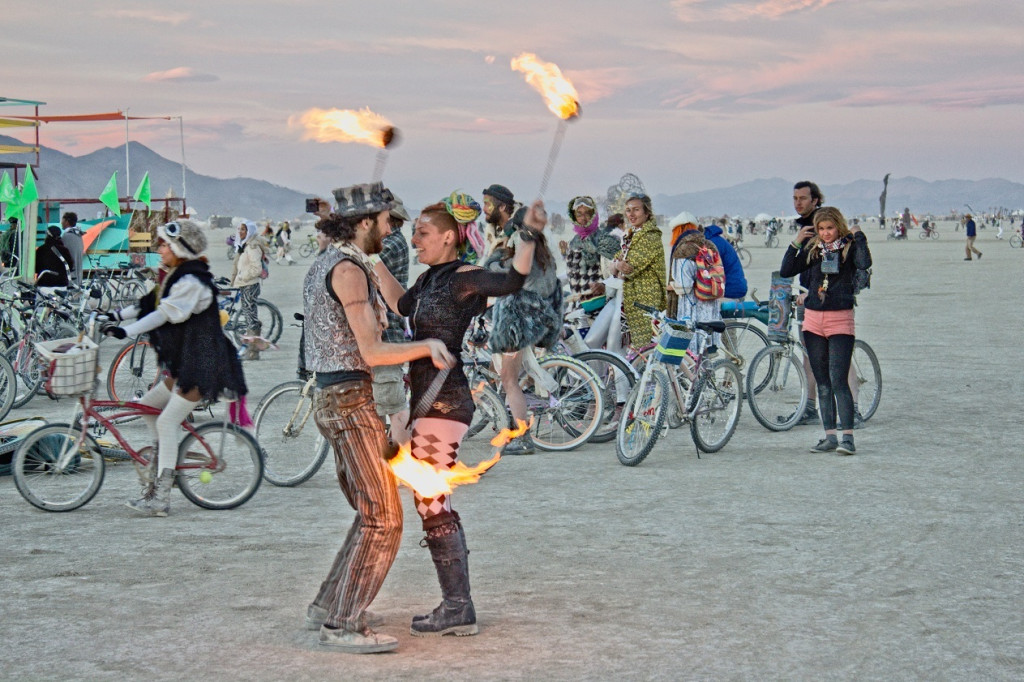 Today is Socially Appropriate Menstruation Day – “Wear white pants with no underwear. Let the blood make it’s artistic mark!” Okay, yeah, there is no way I will ever be this free.

Today is also Can’t Say No Thursday – “Say Yes to everything asked of you today and be amazed where it takes you!” I said an emphatic NO to “Socially Appropriate Menstruation Day” before I saw it was “Can’t Say No Thursday”, so it doesn’t count. The rest of the day, I will say YES to it all! 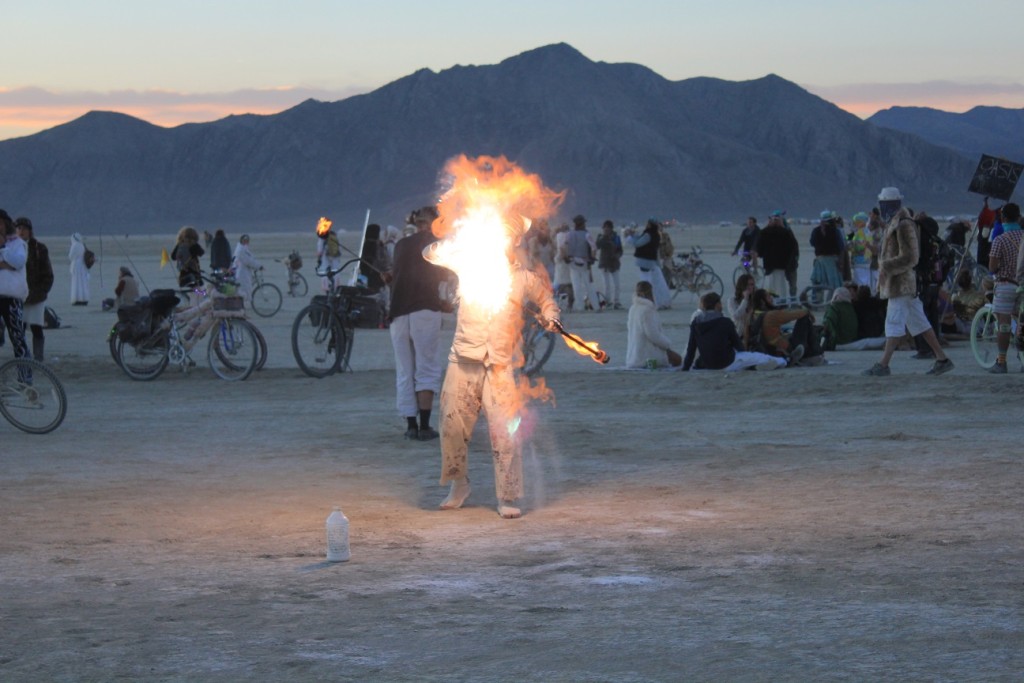 Down the rabbit hole – “Come for a lecture to learn about the modern advances in neuroscience and the implications those discoveries have on our lives as well as society at large.”

We got there a little early to find the man “Desperado” who was putting on this event had almost completely lost his voice. The room filled up very quickly as his camp mates helped try to get the PA system working. Due to technical difficulties (everything mechanical and/or electronic is so gummed up with Playa sands by now) he started the talk by whispering to his helper who would relay for him. He soon grew frustrated with how much time that took and tried to whisper-yell but that wasn’t working either. Thankfully, the PA system sparkled to life and saved the talk.

This was a super interesting talk about how the languages we speak, fire up different synapses in our brains, and change the ways we think. If you name something, it cements it as a concept in your head.

There were a lot of different examples and the group came up with many examples for words in other languages that we don’t have in English. The discussion was over much too soon for my liking. Desperado has another event later on this week that I’m going to make an extra effort to get to. 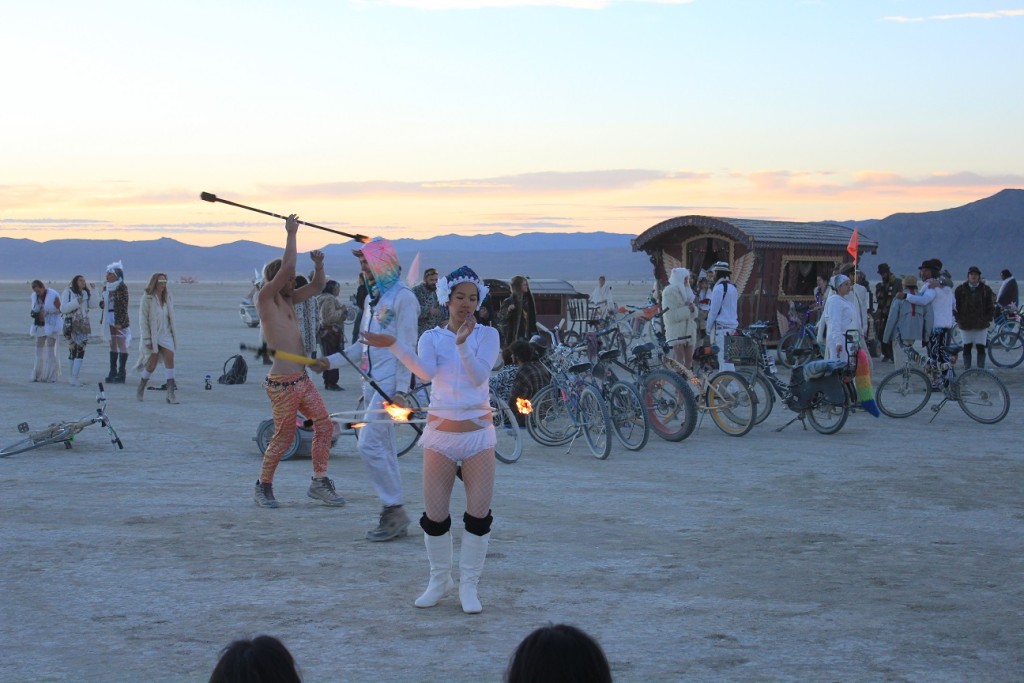 This evening, a large group of us got together to  for a birthday celebration at the 7 Sins Lounge, which is run by a bunch of people from Bozeman, MT, where some from our camp are also from . The event was: 7 Sins Lounge proudly serving Flaming Blue Phucks! I seemed to enjoy the Flaming Blue Phucks more than the others in our group. If there is one thing I learned from this event however, it’s this – Don’t let your drink keep flaming while you wait for everyone else to get their shots! The glass heats up and will burn your lips. Go figure! 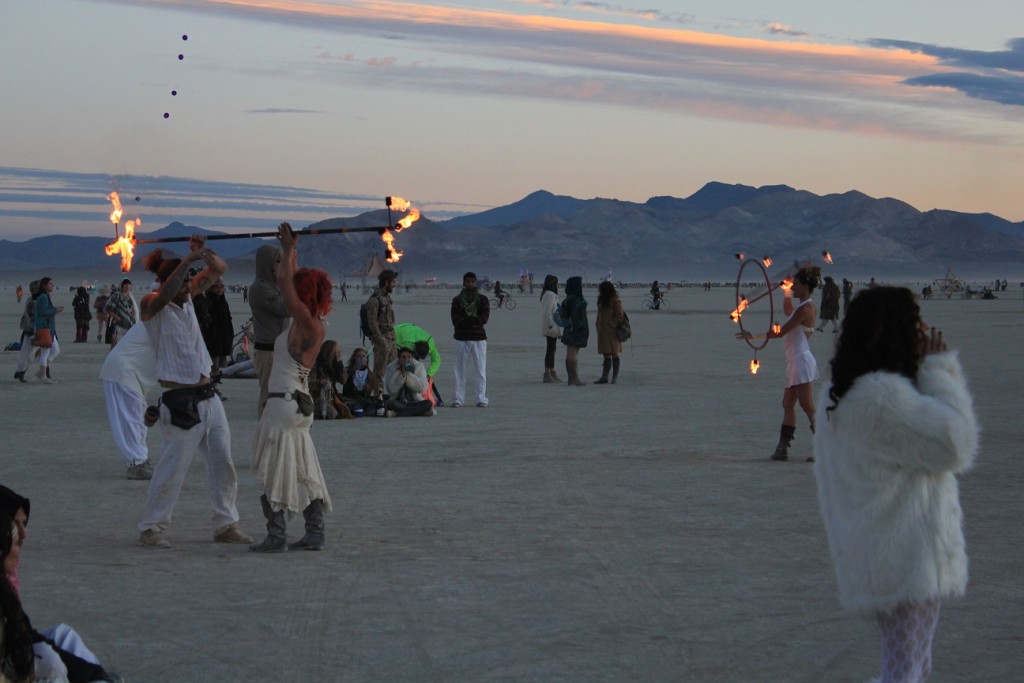 We hung out around their burn can with a group of people and then rode across the Playa to see some EDM DJ I have completely forgotten the name of, but I was told he is quite famous and very talented. The vibe here was completely different, and the crowd seemed angry and missing the loving, happy attitudes found elsewhere. People were pushing against each other as the crowd grew in size and we realized we were almost trapped in there. 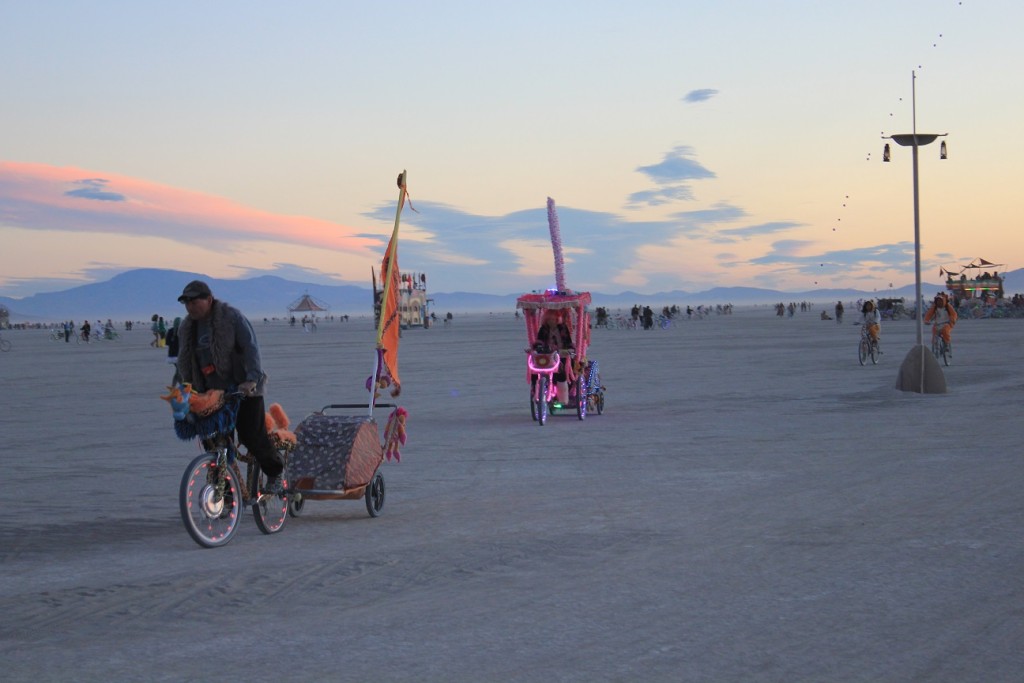 As we pushed our way out, we came across a girl who was trying to back out her bike against the crowd. Nobody would give her any space and she was growing upset and frustrated. I told her she might have an easier time if she turned the bike around, but she was so jammed in and couldn’t turn any way, so I grabbed her bike, picked it up above our heads and turned it, yelling at all the angry people around us “Watch your heads! Bike coming down!” Amazingly I didn’t hit even one person, the people gave the bike room, and a couple of arms came up to help place it down again. A minute or so later, as we were still trying to get out of the crowd, I felt a hand on my shoulder, and turned around to see a young bearded, guy, who looked a lot like Jared Leto. “That was so awesome what you did! Thank you! I love you!” Jared Leto yelled, as he hugged me. “I love you too!” I yelled back at him, totally overcome by the moment. 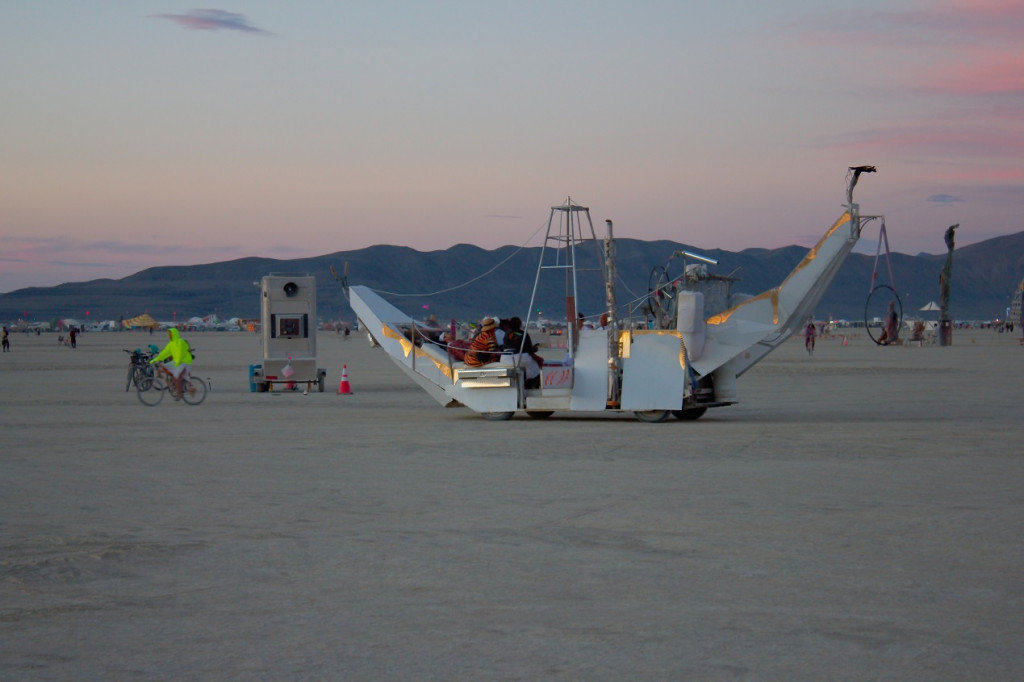 It’s ironic that only five minutes after this most wonderful moment, I should meet the meanest man at Burning Man. He was walking down the street, with his assistant at his side. She wore non-descript, dark clothing, with 2-way radio headphones on her head. He was head to toe in the most lit up Elvis costume I’d ever seen. He was like an Elvis version of Robert Redford’s Electric Horseman, except with even more lights! 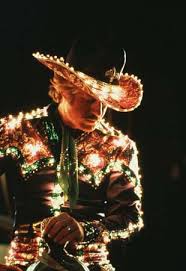 I stopped my bike beside him and said “That is the most awesome costume I’ve ever seen! You’re like a neon Elvis!” To which he could have simply responded “Thank you! Have a great burn!” and been on his way. Instead, Mr Pompous-Aussie said, in a tone you’d use on a bad child, “I don’t have time to talk to you! This is my second time trying to get down this road without my suit losing power!” And with that, the lights went out on his suit. I almost laughed (but kept it inside) as I said “Oh no! It looks like it happened again!” and as we rode off, “Have a great burn!”