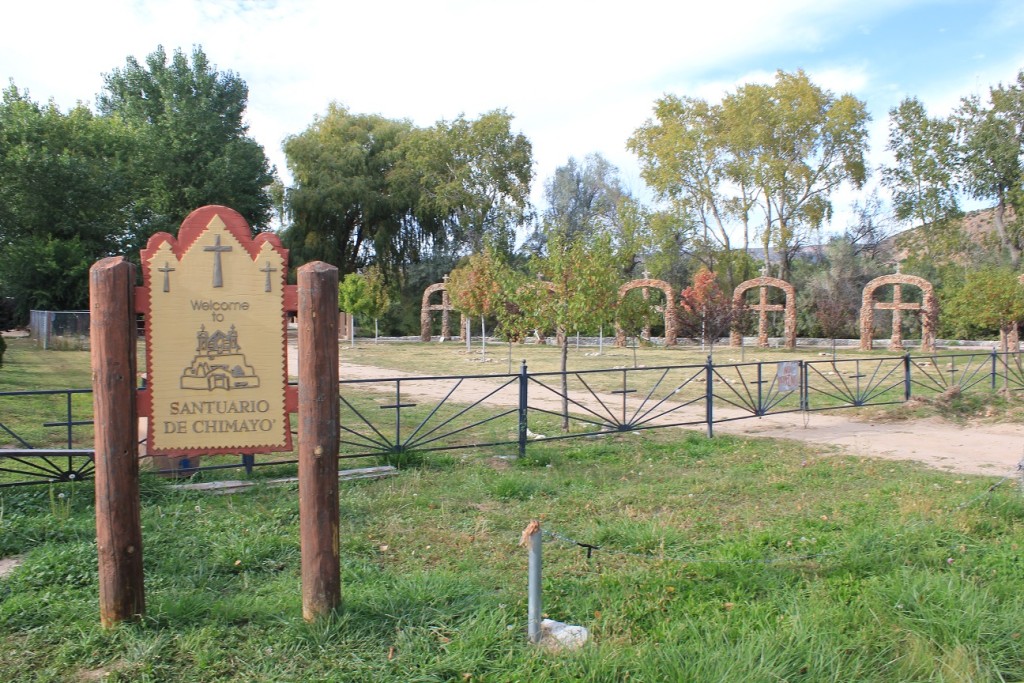 Chimayó is a small, rural town 24 miles north of Santa Fe, NM in the foothills of the  Sangre de Cristo Mountains. Founded at the end of the 17th century by Spanish settlers, it is known for it’s high-quality weaving, red chile, horse and sheep raising, fruit orchards as well as traditional arts of wood carving, paintings of saints on retablos (flat wood slabs), bultos(sculptures), tin working, colcha embroidery, and pottery. 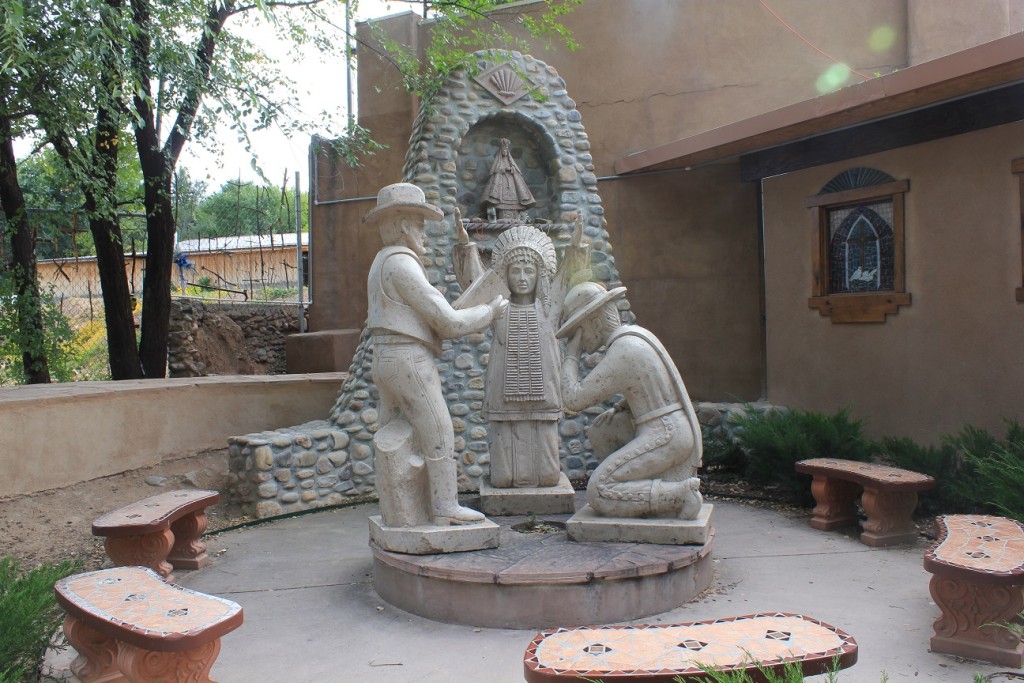 The countryside is gorgeous, with rolling hills along narrow country roads lined with trees that sweep into the roadways. Driving east from the highway, we saw an outcropping of red cliffs off along the south end of town. Roadside vendors manned booths selling batches of reddish-brown bunches of peppers and something called piñons. 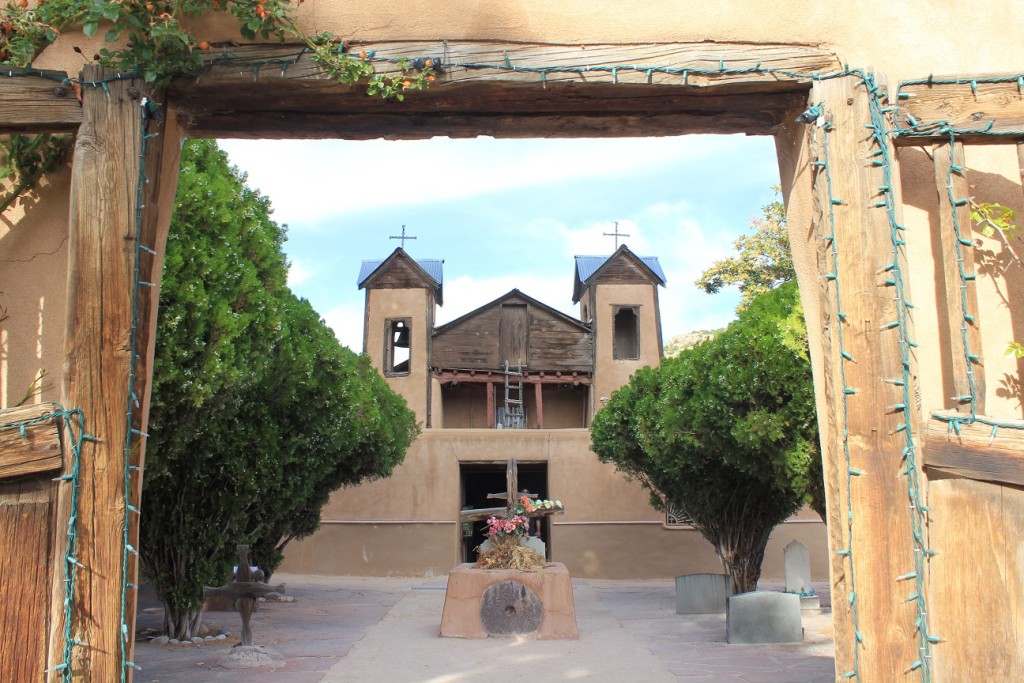 We missed our turn so I got Harold to turn right at the next through street. This took us down a very narrow, one lane road that wound it’s way south to our target, the El Santuario de Chimayó. 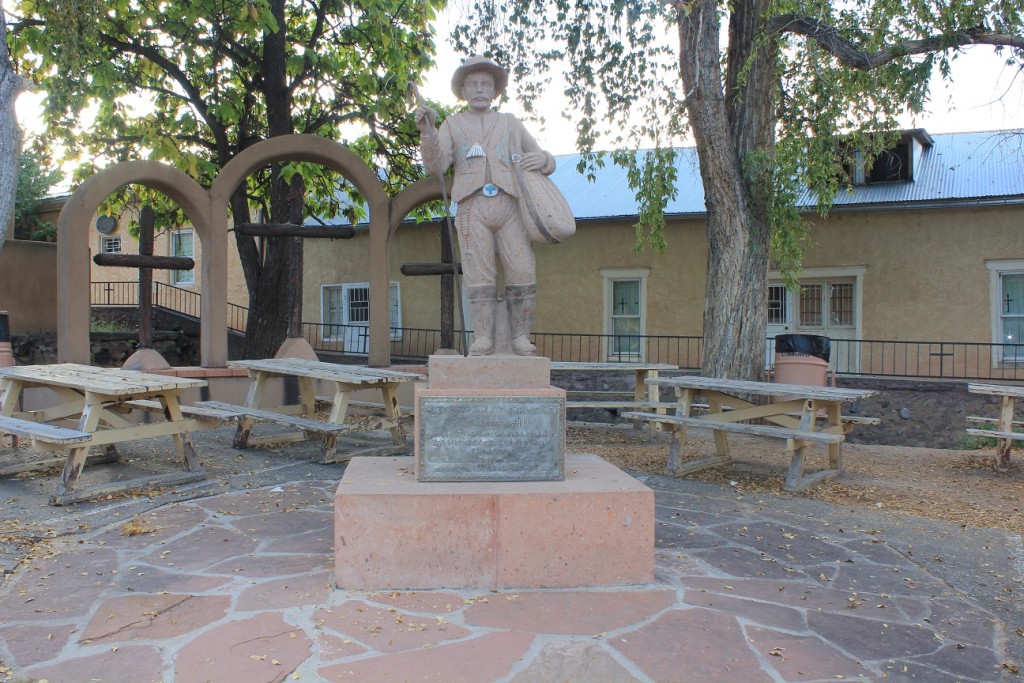 From  Wikipedia:
El Santuario de Chimayó is a Roman Catholic church in Chimayó, New Mexico, USA. (Santuario is Spanish for “sanctuary”.) This shrine, a National Historic Landmark, is famous for the story of its founding and as a contemporary pilgrimage site. It receives almost 300,000 visitors per year and has been called “no doubt the most important Catholic pilgrimage center in the United States. 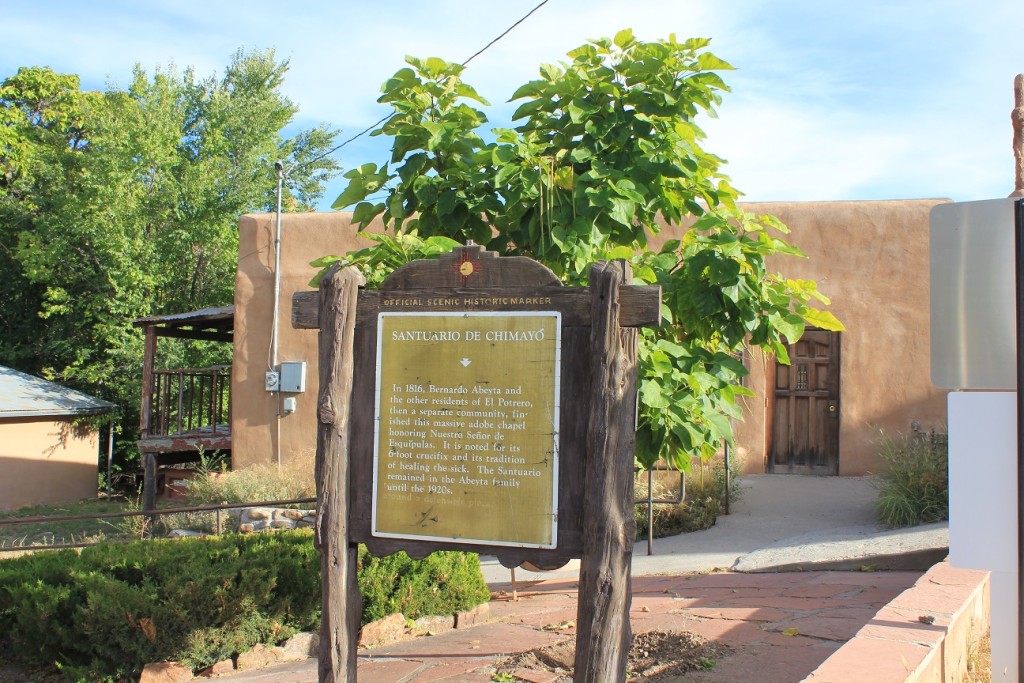 We drove into what appeared to be a tiny adobe town, with the church in the middle of it all. The parking entrance was down the road a ways, but it wound around, in behind the church. Coming up the trellised walkway brought us to a small park filled with little prayer points called stations of the cross.

From Wiki again:
Stations of the Cross refers to a series of images depicting Jesus Christ on the day of his crucifixion and also to the prayers Christians say when contemplating those images. Often a series of 14 images will be arranged in numbered order around a church nave or along a path, and the faithful travel from image to image, in order, stopping at each “station” to say the selected prayers and reflections. This will be done individually or in groups. Occasionally the faithful might say the Stations of the Cross without there being any image, such as when the Pope leads the Stations of the Cross around the Colosseum in Rome on Good Friday. 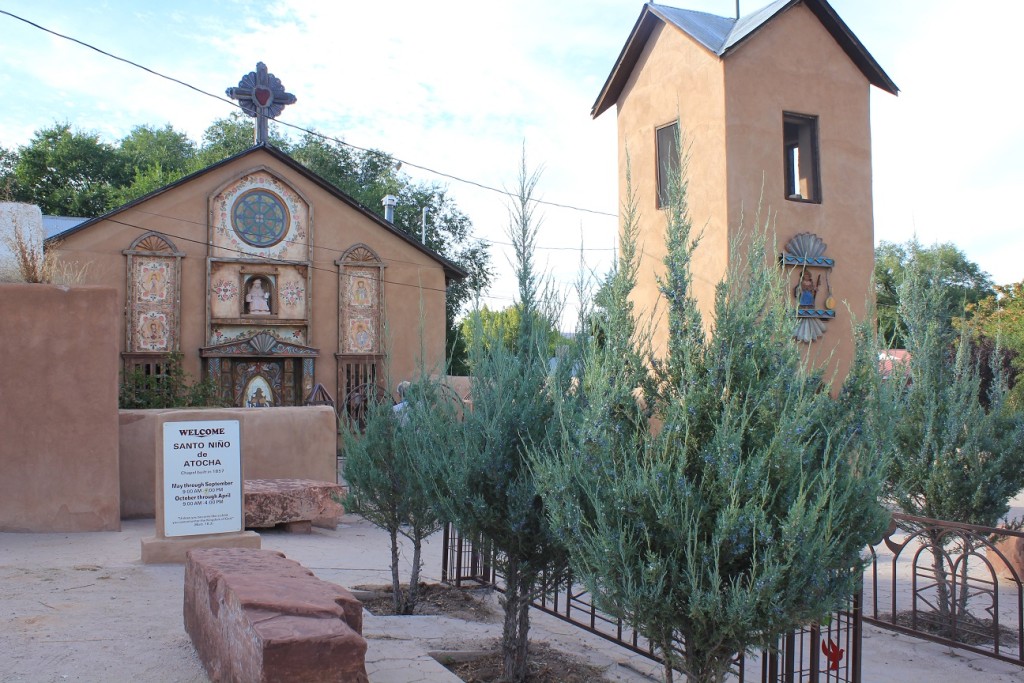 We wound ourselves up a small incline, past a booth selling candles, and a small restaurant. The church lay out to our left, and we entered via a small side door. This brought us into a narrow alleyway prayer room filled with pictures of those who have asked for miracles here as well as many crutches and canes of those who have been “cured”. 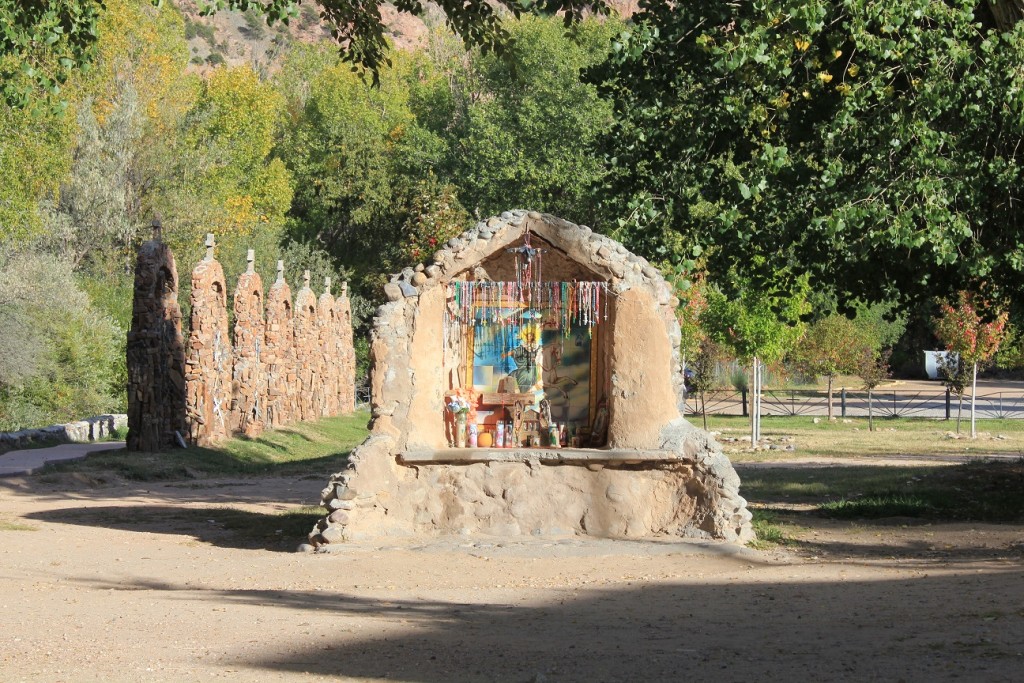 At the far end of the room is a door that leads into another tiny square room. On the floor is a hole filled with dirt and a shovel. As I stood there wondering what this was about, two small hispanic boys came in, shovelled some dirt into their small bags, and left. The el pocito (little well) contains what is believed to be holy dirt (tierra bendita) that some people believe has healing powers. They take this dirt to others who cannot make the pilgrimage here. They used to eat the dirt or mix it with holy water and drink it, but now it is more common to rub it on the parts of their bodies they wish for a cure for, or just keep it in their homes. 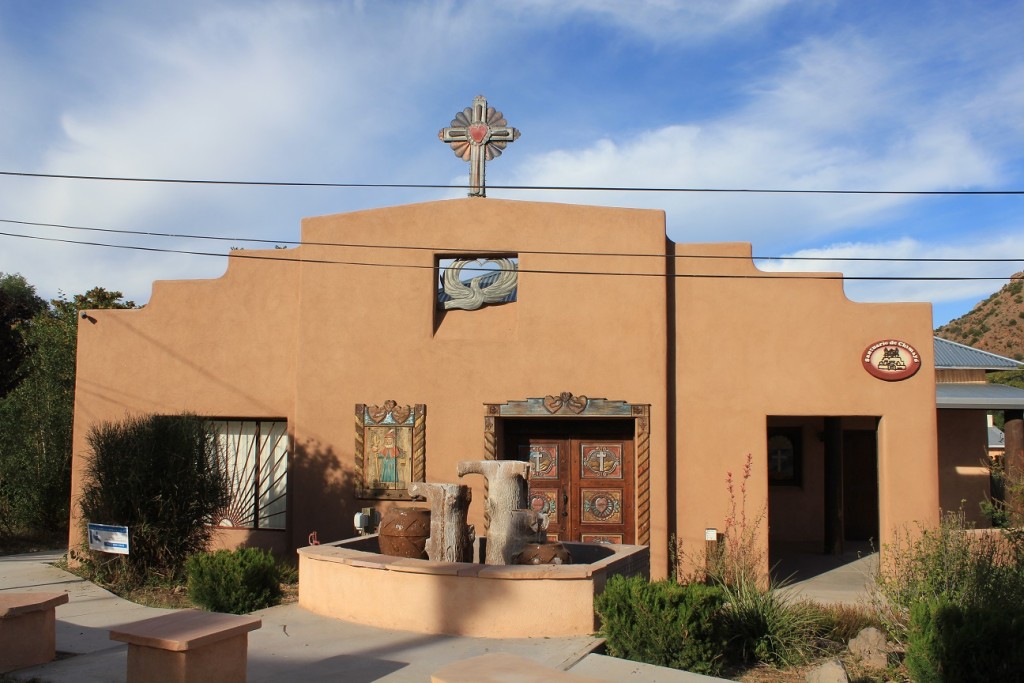 I whispered to Harold, very, very quietly, so as to not be overheard or seem disrespectful, “This can’t be the same dirt coming out of the ground for 200 years?” He just shrugged at me in response. I quickly found my answer on the wall behind me. The dirt is brought in from the hills in the area, sometimes more than once per day. They use 25 to 30 tons of dirt per year.

The back story of this place is that a settler in Chimayo named Bernardo Abeyta was performing penances and found a crucifix. He got permission to build a chapel to Our Lord of Esquipulas in 1813 and the chapel stayed in his family until 1929 when it was purchased and given to the Catholic Archdiocese of Santa Fe. At first, the healings were attributed to the crucifix Bernardo had found, but later this changed to the dirt in which it had been found. 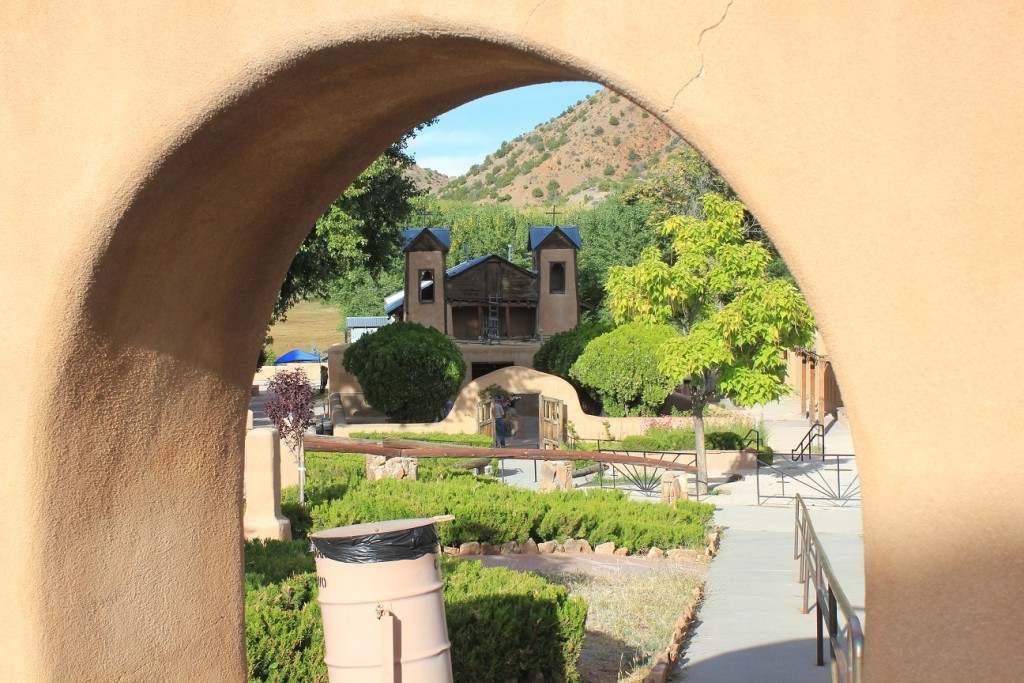 We ducked our heads to walk through a small side door leading from the prayer room out into the main chapel. This room is much taller, about twice as high as the prayer room. The walls are all adobe, with huge lumber beams laid out to support the roof. Along the front of the room is an altar with a large crucifix as the central point. The colours are all in muted hues of red, blue and gold, in an early New Mexican looking style. No pictures were allowed inside the chapel, though we were allowed to take a photo from the doorway. 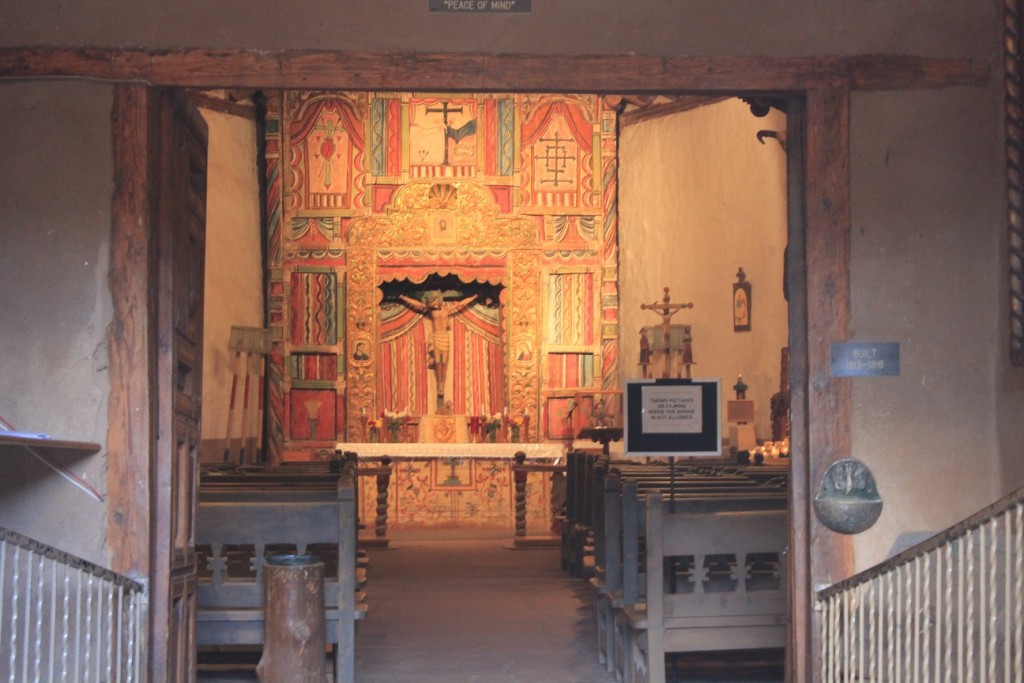 Outside lays a courtyard, surrounded by walls and an archway all made of adobe. Off to the left of the courtyard is an information center that was closed and a store that sells religious tourist items. I was pretty shocked at the high prices. “Keep your opinions in your head until after we leave.” I whispered to Harold, to ward off any conversations that might be overheard. We let our eyes do the talking. 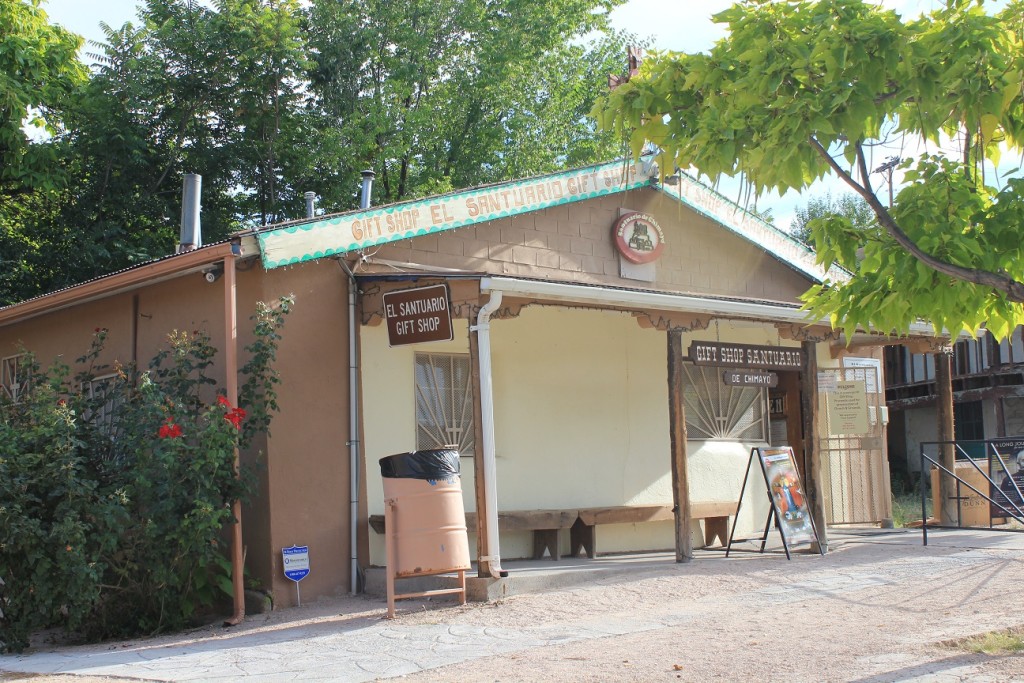 On the other side of the church is a small general store, This place sells non-religious items, various souvenirs we weren’t interested in as well as honey, and an assortment of nuts. This is how we found out what piñons are – they are roasted pine nuts. They were quite tasty so I bought a small bag to take with us for later. 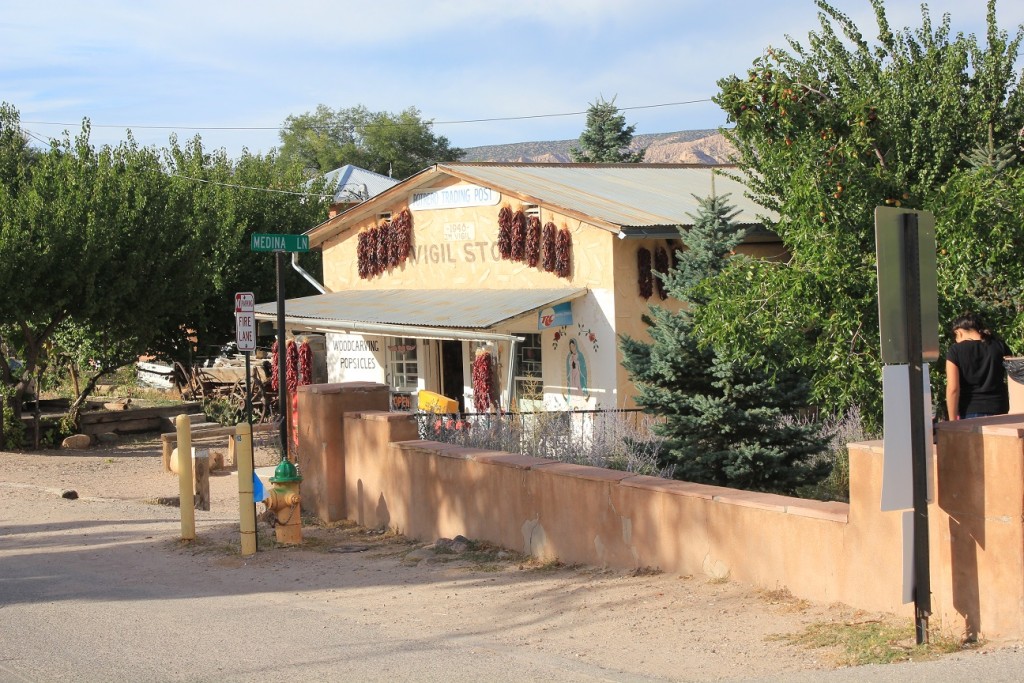 Outside again, I saw the same two boys from the dirt room filling bottles from a “holy water” spigot. Their parents stood nearby with the filled bags and bottles they planned to take home with them.

After our visit, we drove back down the road to a restaurant called Rancho de Chimayó. My mother had told me about this restaurant they had enjoyed when they visited and we still were wanting to taste more New Mexican food. 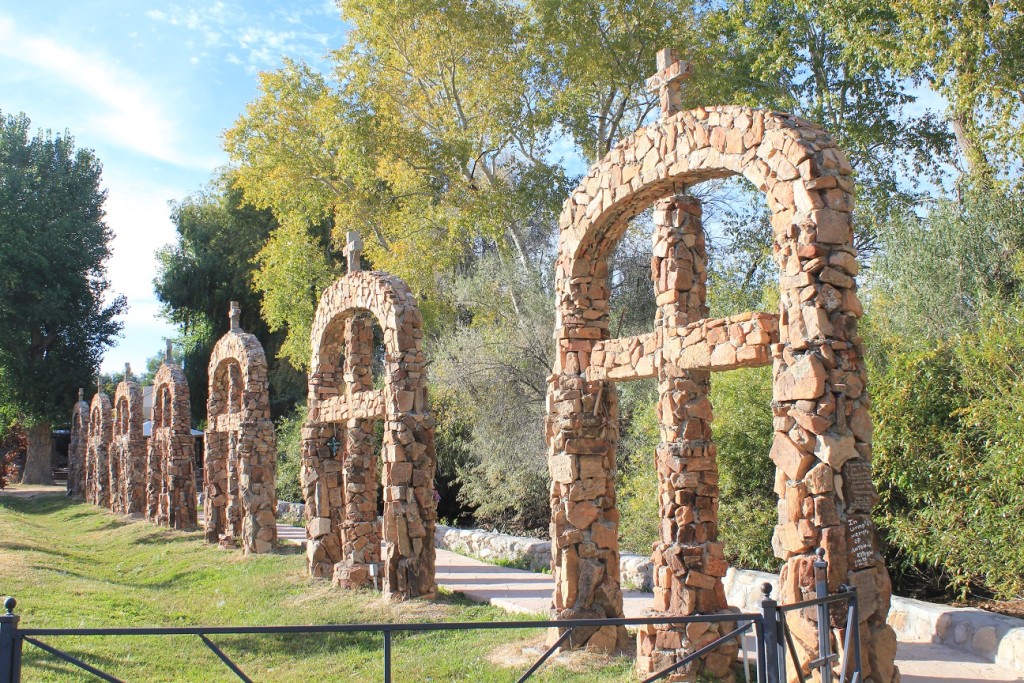 I was happy to see they had two vegetarian options, one with a bean burrito, cheese enchilada, and zucchini and green chile tamale, the other with a chile relleno, a refried bean and cheese taco, and a cheese enchilada. I’m not a big fan of tamales, so I chose the second option. It came with red or green vegetarian chile, spanish rice and something called calabacitas, which I learned is sauted squash, onions and peppers. 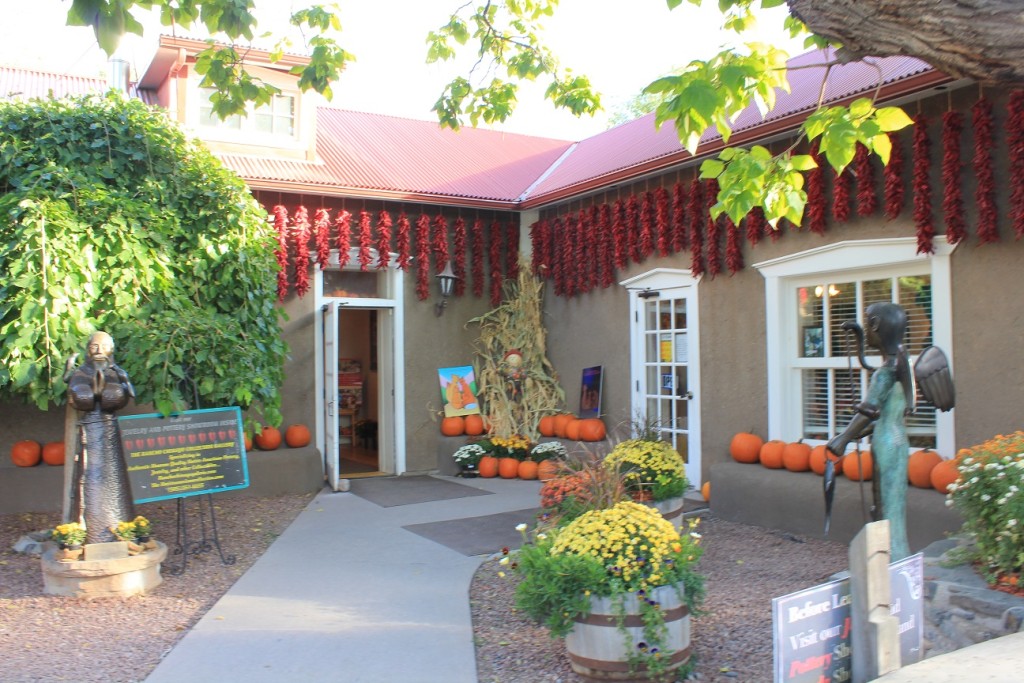 Harold has been looking at the stuffed sopaipillas at all the New Mexican restaurants we have visited this trip, and finally tried one here. Stuffed with misery (cow or chicken meat), beans, and spanish rice, and topped with red or green chile, cheddar cheese and guacamole, it looked like a huge piece of New Mexican lasagna. 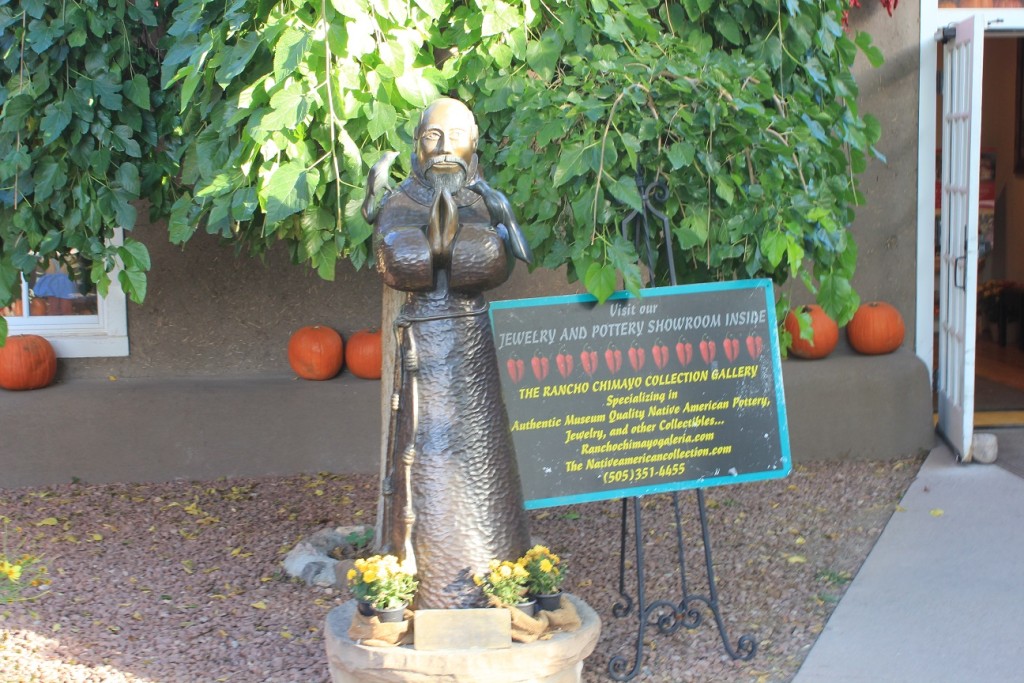 Dinner was followed by our requisite sopaipillas and honey. These weren’t as good as the two different ones we’d had in Taos, but they were still tasty. We were both surprised to realize we’re starting to notice the difference in honey tastes. This one was not as smooth as the Taos honeys. Harsher bees perhaps? Maybe the Taos hippy vibe lends itself to a calmer bee and smoother honey? 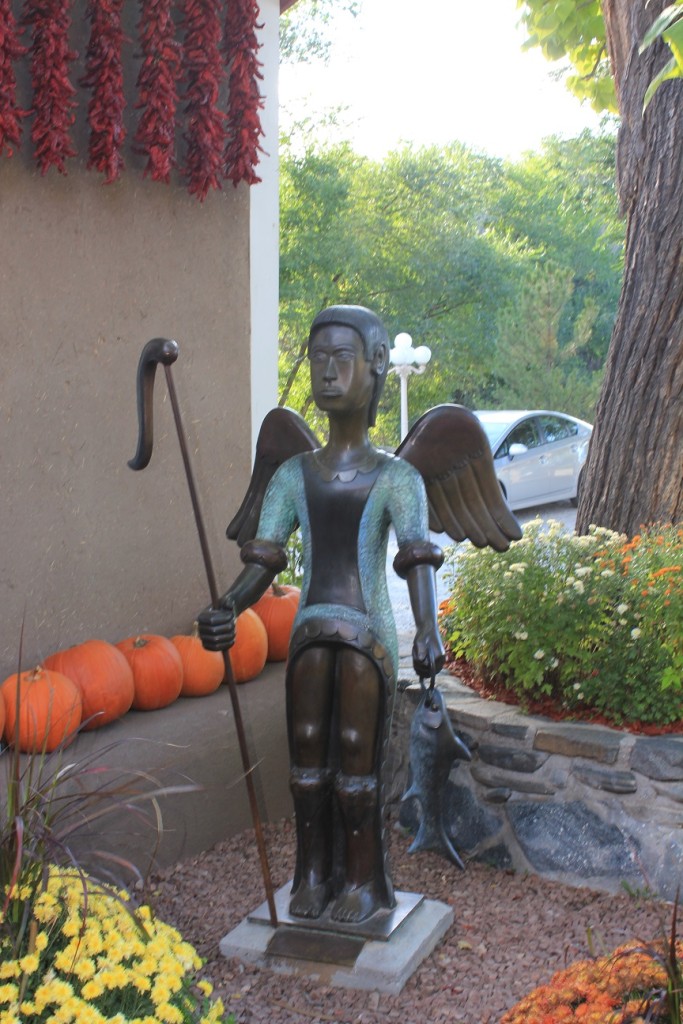 While we had a very nice meal here, and I would recommend it for the location, beauty, and the food, the service wasn’t very professional. It wasn’t anything to complain about – it was just rather amateur and fumbling. I’m guessing that since this place is far from the city, it must have trouble attracting staff.

Chimayo turned out to be a very nice day trip. It’s not a place we’d go back to a second time, but it’s well worth doing once.