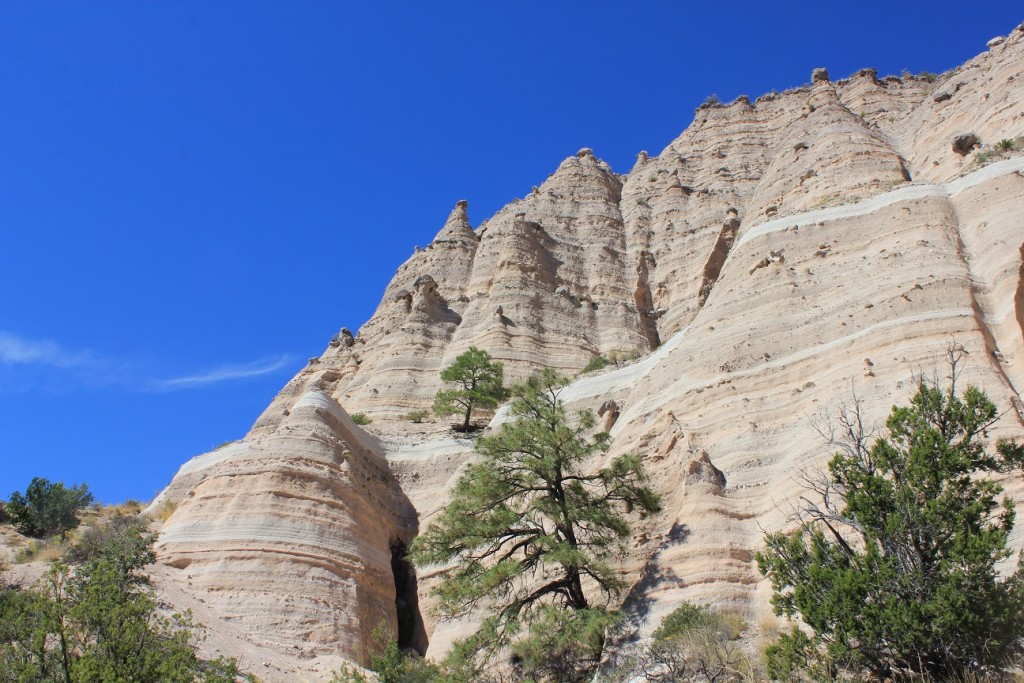 The day before, wandering around Old Santa Fe, we had come across an artist selling her photographs. We particularly admired her images of what she told us were Tent Rocks from a park down by Cochiti. She told us this was the only place outside Turkey to see these kinds of rocks. When we got back to the RV, I looked it up and found out it was a National Monument site established by President Bill Clinton in January 2001, just before he left office. 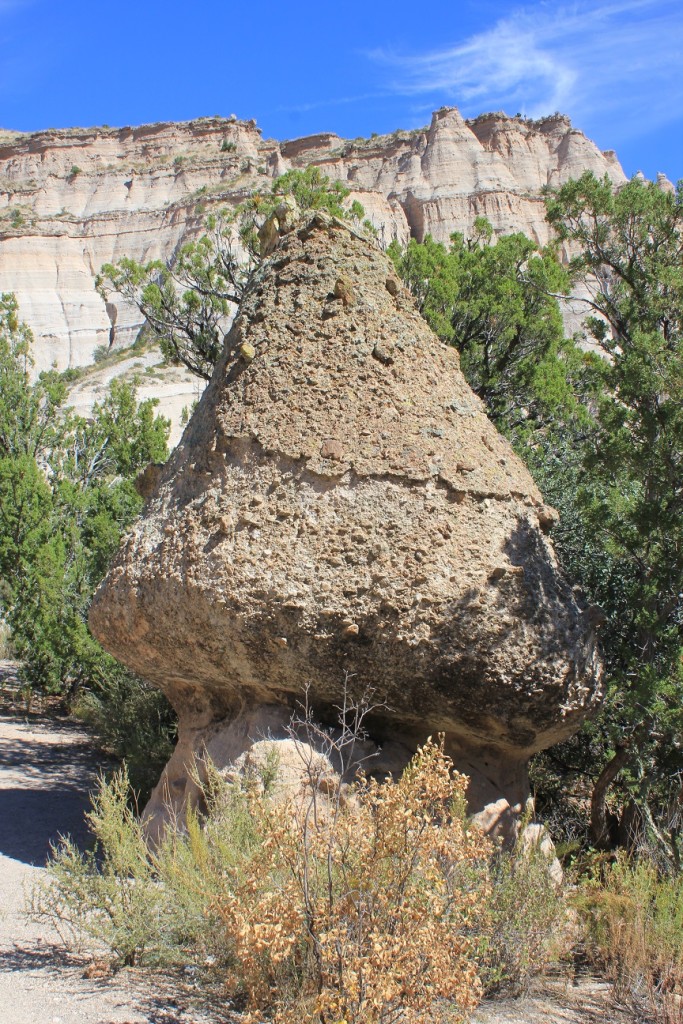 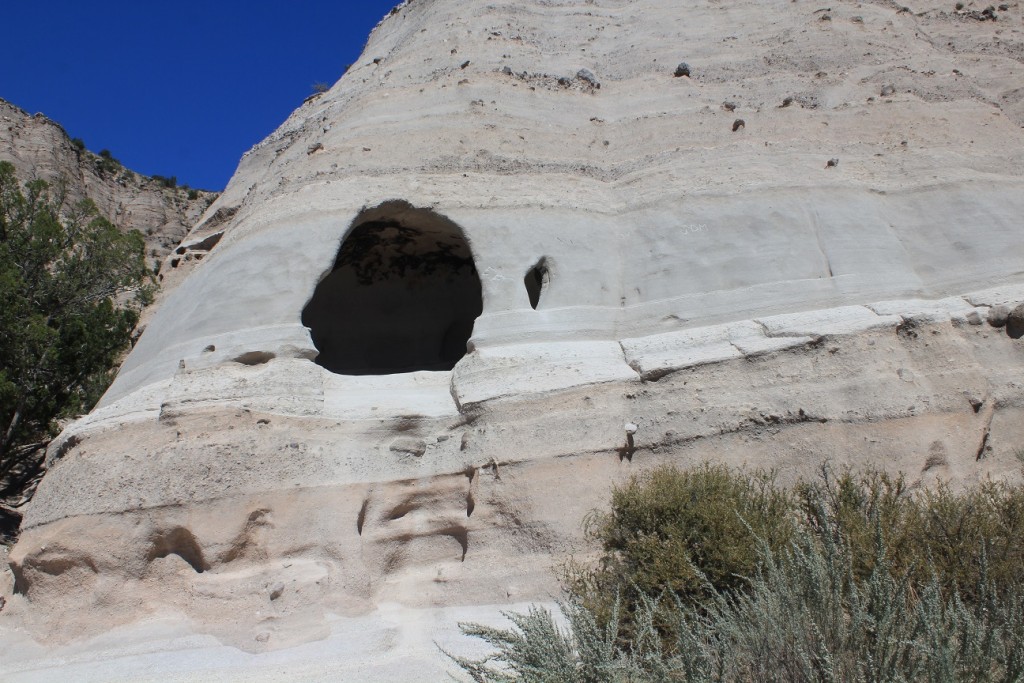 From Wikipedia:
The area owes its remarkable geology to layers of volcanic rock and ash deposited by pyroclastic flow from a volcanic explosion within the Jemez Volcanic Field that occurred 6 to 7 million years ago. Over time, weathering and erosion of these layers has created canyons and tent rocks. The tent rocks themselves are cones of soft pumice and tuff beneath harder caprocks, and vary in height from a few feet to 90 feet. 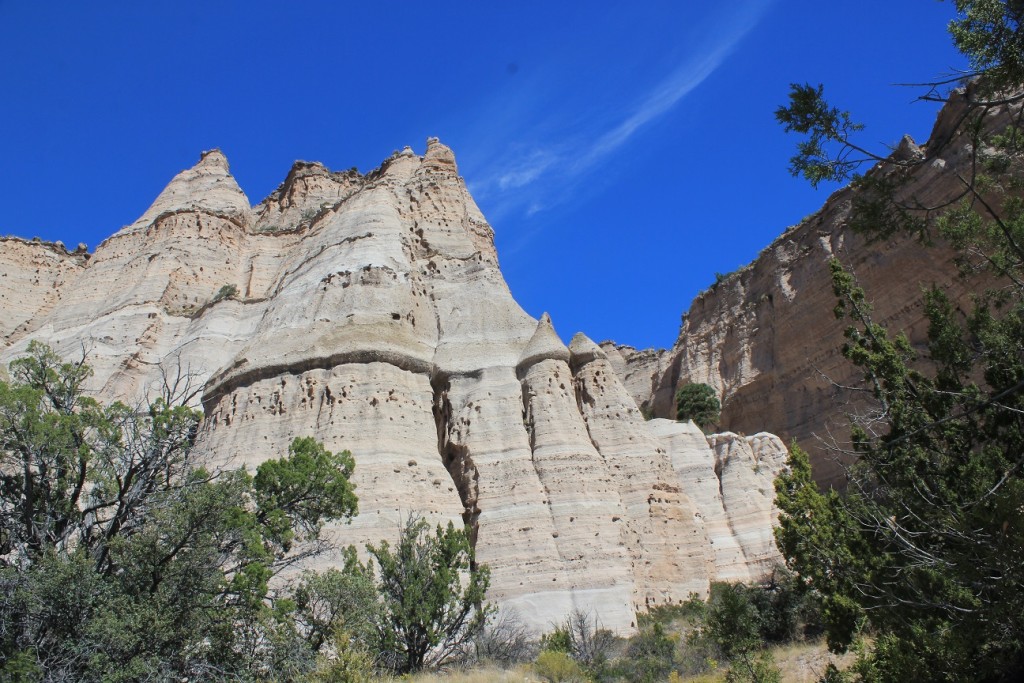 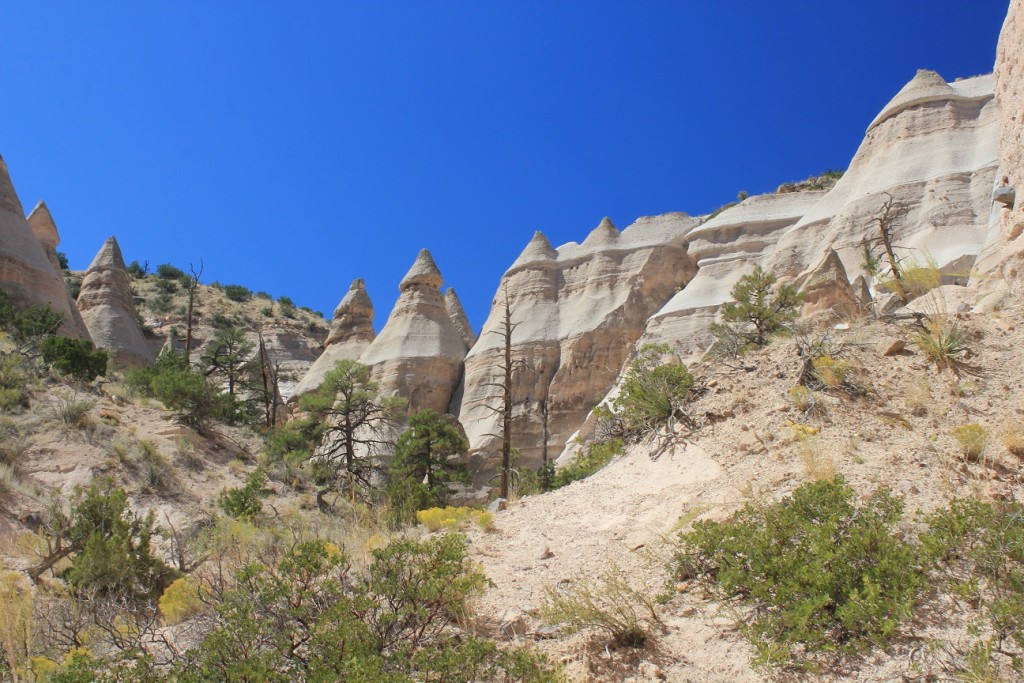 We drove out over the Cochiti Reservation to get there, and past the Cochiti dam. There was a payment booth to get in, but we used our America the Beautiful pass. Without it, the cost is $5 per car. Like pretty much every other National park or monument, there are no dogs allowed, so we left our pooches behind in the trailer. 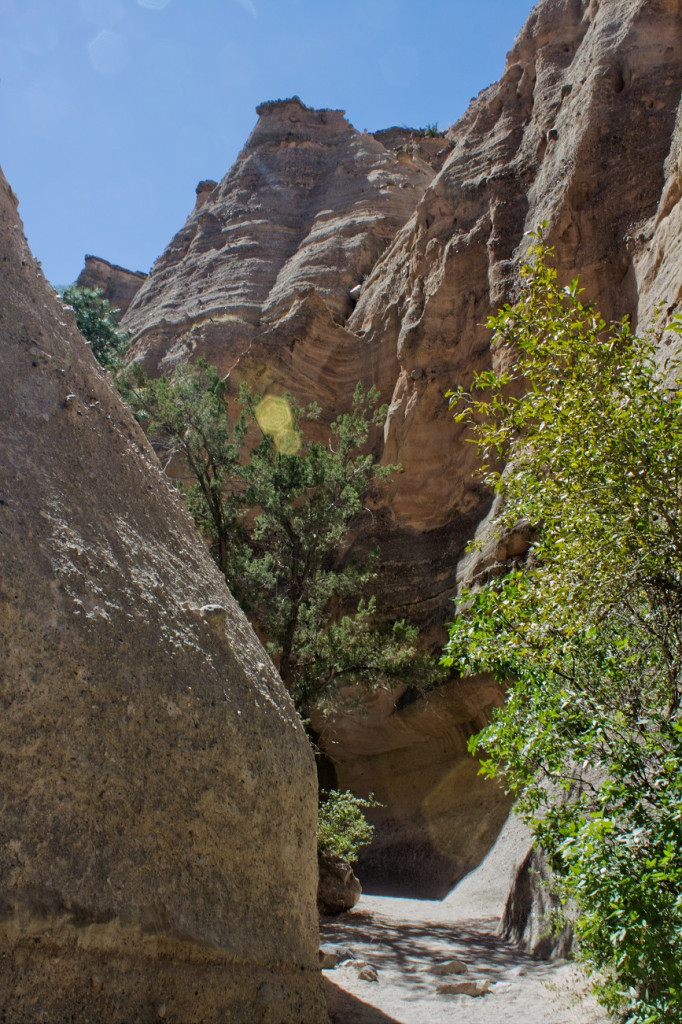 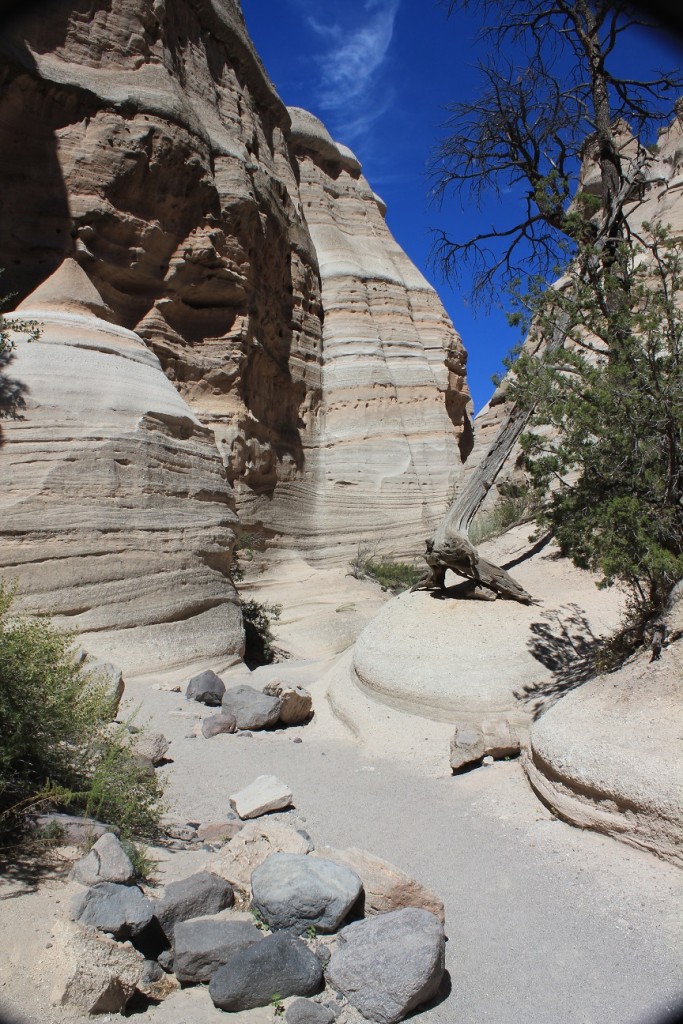 All the way through the park, we didn’t see anyone except for one old couple driving about 3 miles per hour. We quickly passed them, while still maintaining our own slow pace as demanded by the signs and bumps on the road. We were surprised at just how busy the parking lot was when we arrived. Every single spot was full, and we lucked out into getting a spot someone had just vacated. 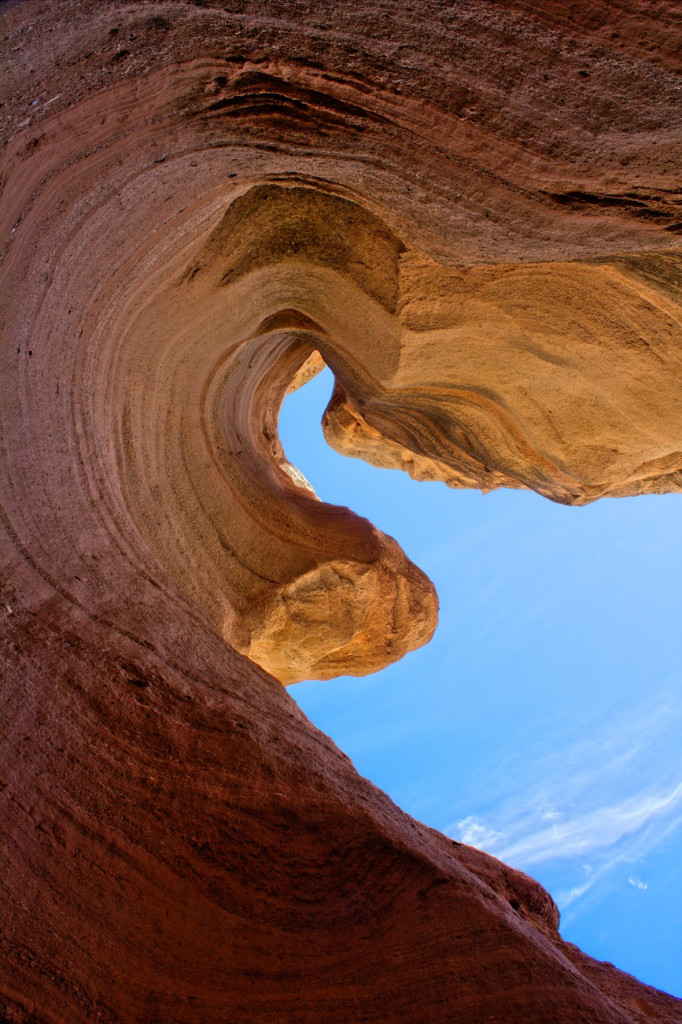 There are two trails from this lot. An easier 1.2 mile Cave Loop Trail that gets you up close to some tent rocks and then goes up to a cave, and the more difficult, 3 miles there and back, Slot Canyon Trail, that goes through the slot canyon before climbing into the cliffs up above. 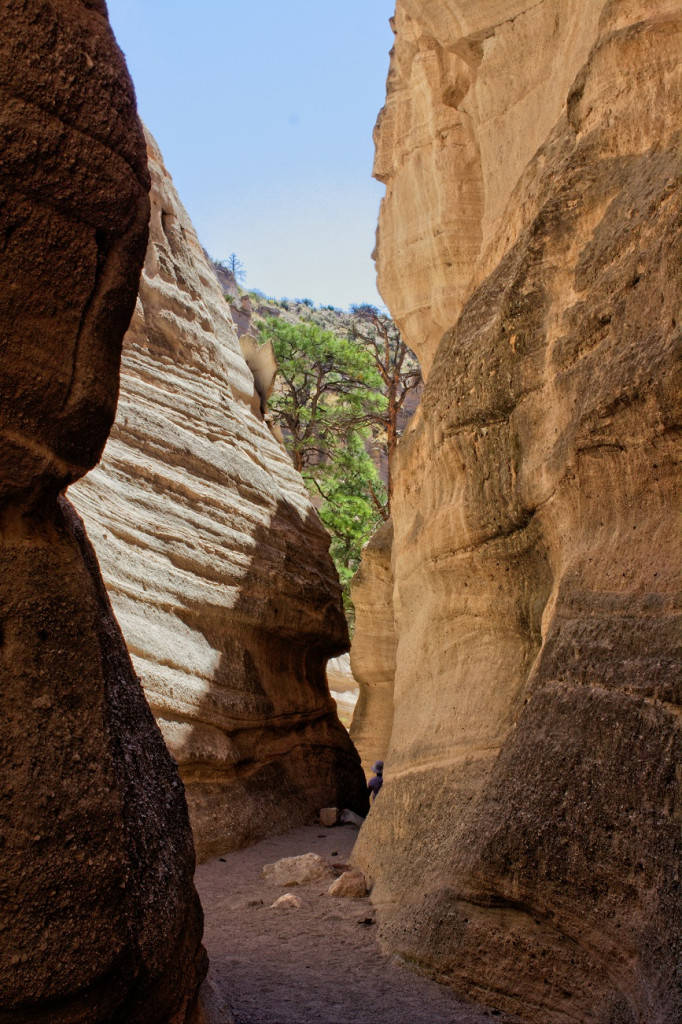 We had decided we wanted to do both hikes, and when we saw everybody else going to the right, we chose to do the opposite and go to the left first, doing the Cave Loop trail. We did meet a few people along the trail but they were all going the opposite way so they were all brief meetings, just the way we like it. This trail first meandered around a grouping of tent rocks, and then wound up alongside the cliffs to a cave, before attaching to the Slot Canyon trail. 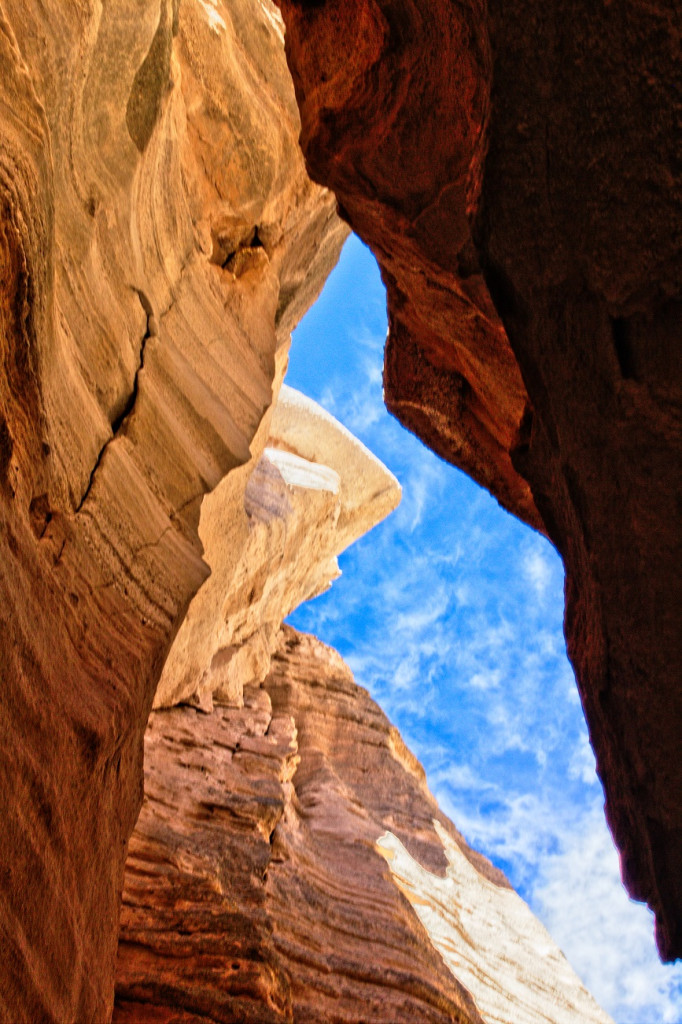 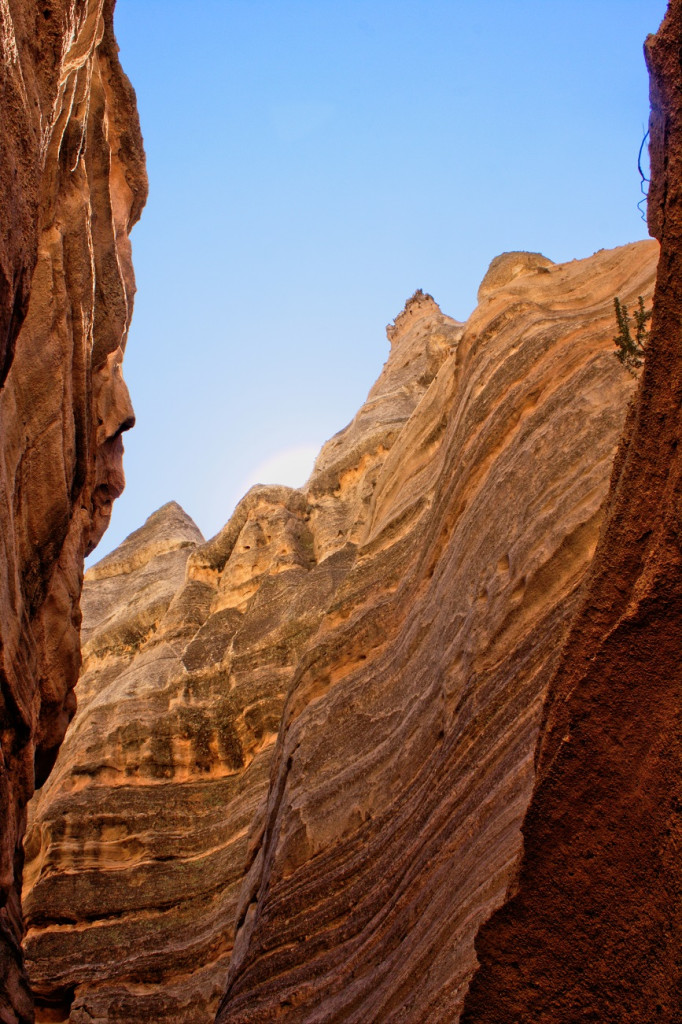 If you’re only going to do one hike, it has to be the Slot Canyon trail. The first mile you are climbing up through a gorgeous red stone walled narrow canyon that eventually opens up into a steep climb (630 ft) to the mesa top. There are lots of warning signs about not doing this hike during rain and storms, and I can imagine why – in a flash flood the water would fill the narrow canyon and there would be no way to escape and lightning would bring it’s own set of issues, perhaps ricocheting back and forth all the way down the canyon walls. 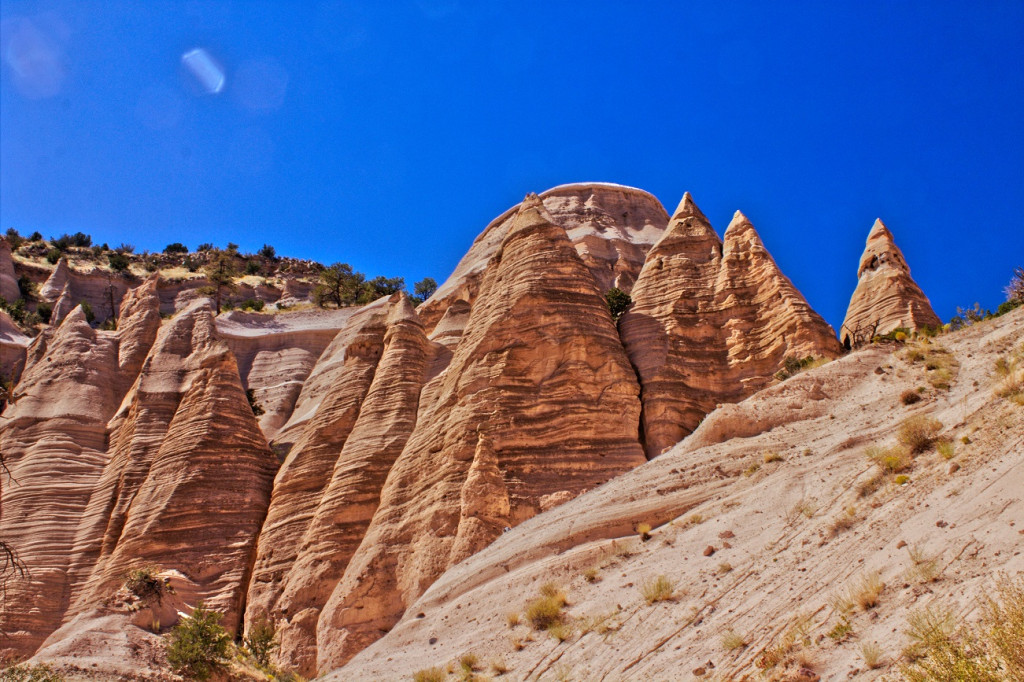 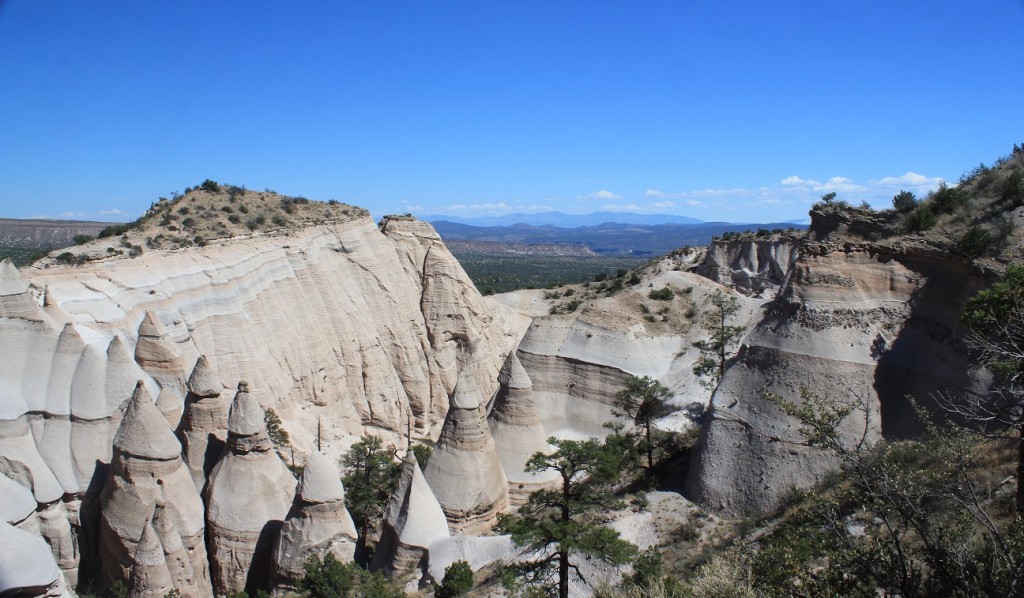 It was a gorgeous day, but I had forgotten my hat, so I tried to run from one shady spot to another, but there were a lot of points I just had no choice. Thankfully, we brought lots of water, so I kept myself well hydrated and all was fine. 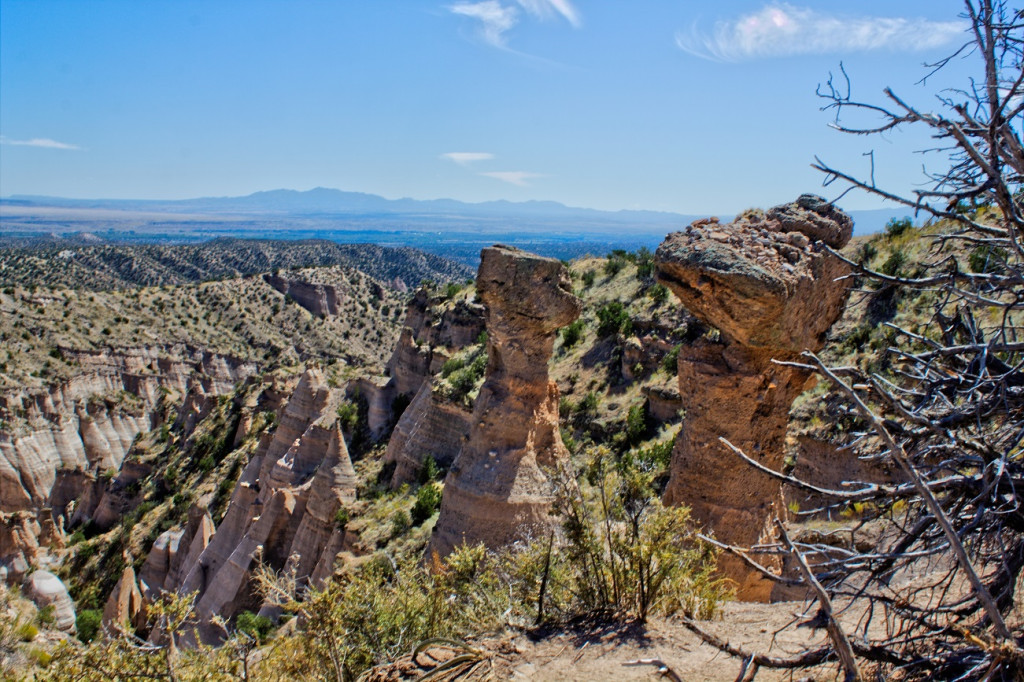 It’s a pretty busy trail, with a lot more people than we expected. If we did it again, we’d start earlier. We started at about 11am and we met as many going in as we did coming back out again. It wasn’t unpleasantly busy, by any means, and it was enjoyable to stop and chat to different people. In one spot, we had to climb up through an area that was like a cave and there were 5 or 6 people there discussing the hikes they’d done in other areas. Everybody coming back down liked to tell us we were almost there, with ‘almost’ being a very subjective term. 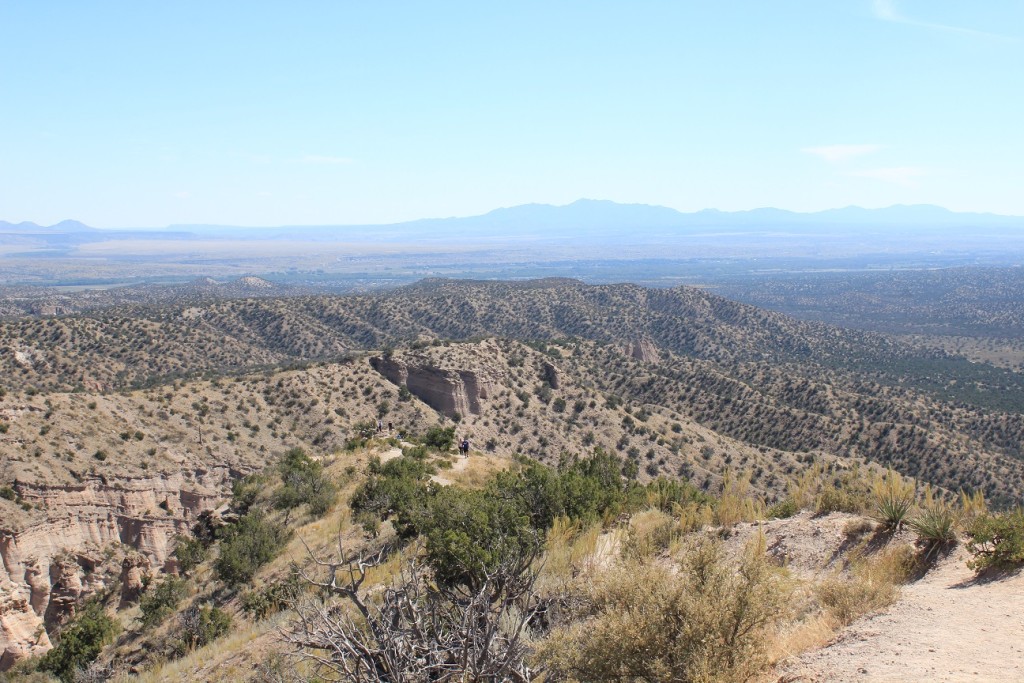 There was one spot that a few people coming back down warned us about. At one point on the incline, there is a spot, that’s about waist high, you need to pull yourself up and over. After that, you’ve done the worst, and it’s a back and forth to the top, where you are treated to the most gorgeous views of the Sangre de Cristo, Jemez, Sandia mountains and the Rio Grande Valley. 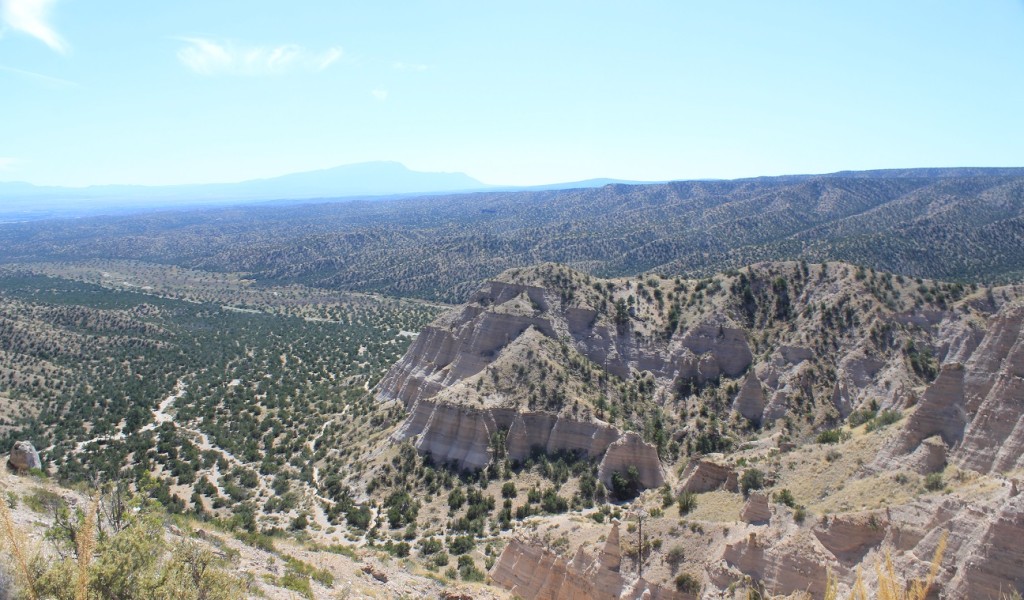 That night we stayed out to capture images of the super moon. There was a fair across the meadows from us and it was surreal to sit out in the park, hearing the fair sounds waft across at us. It felt almost like the start of a horror movie, but we managed to live through it. 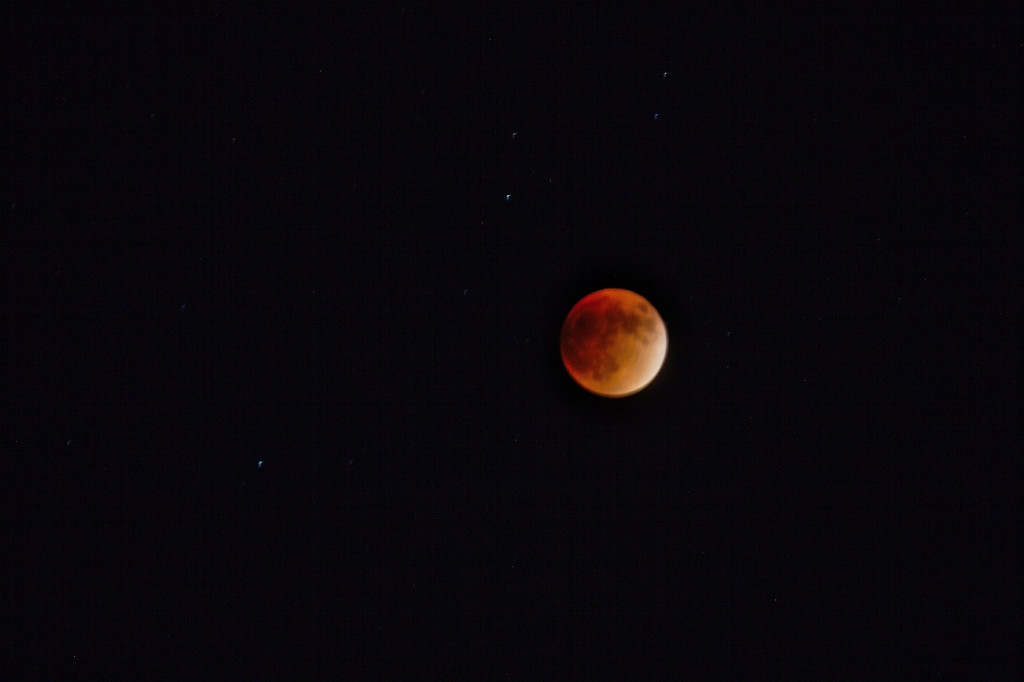