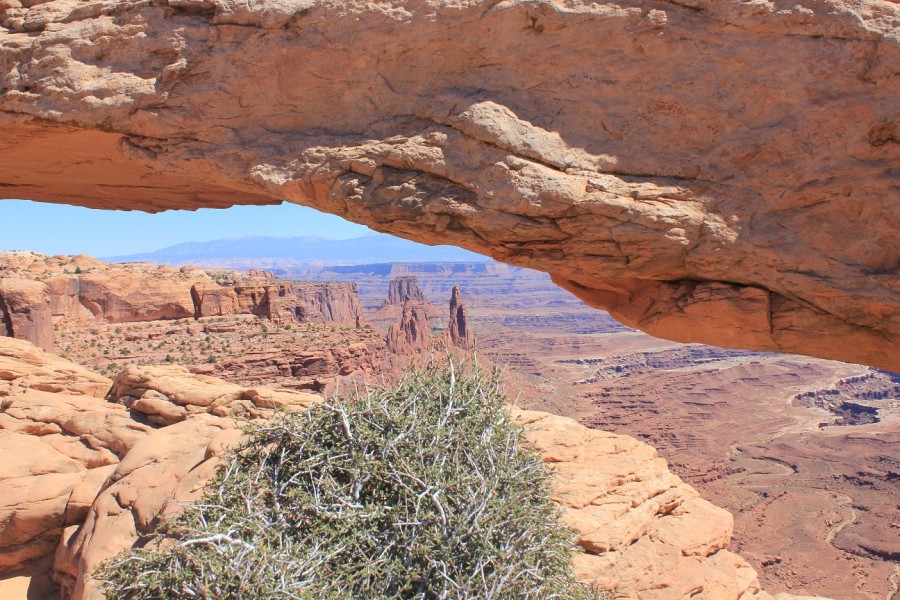 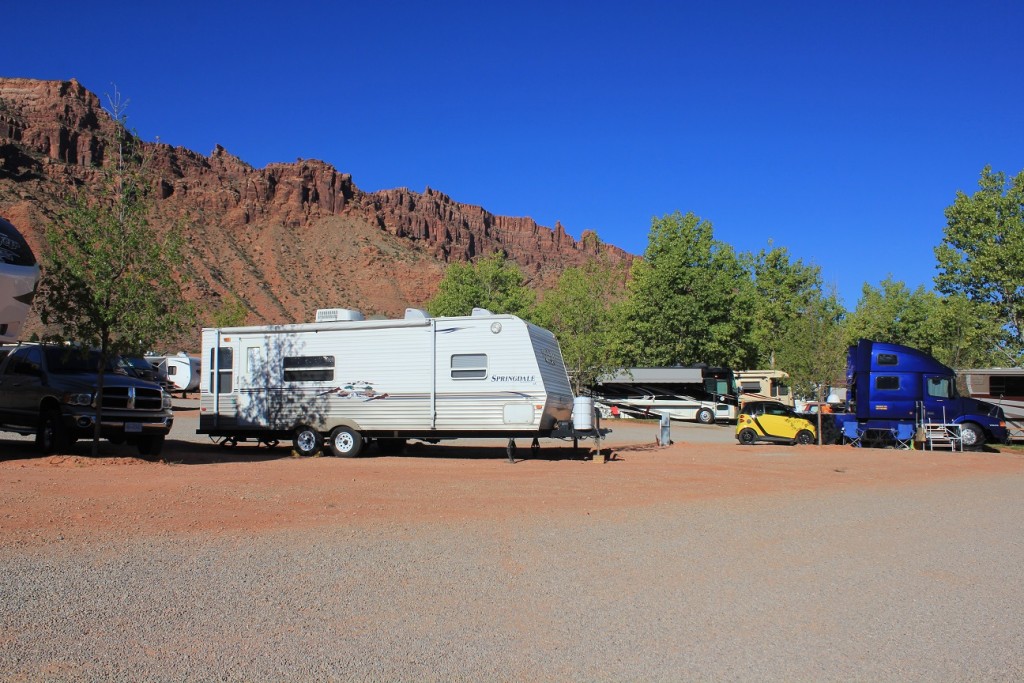 Harold went out to take some photos of the beautiful cliffs behind us this morning. As he was standing there, an older woman came up to him, and before he could even say “Good morning!” she spurted “That’s the sort of wall we need to keep them damn illegals out!”

It’s hard not to compare the people we met at Burning Man with those we’re meeting at this RV park. Why does everything have to turn political so quickly and why do people take it for granted that we will just agree with them? We’re not about to get into an argument with strangers over their racism, so we just make excuses and remove ourselves from the situation.

Whenever we travel, one of the best things is how I lose track of what’s happening in North America politically. I voted before we left in August and I’m enjoying not paying attention at all to what’s going on back at home in Canada. It’s more difficult to ignore American politics. Occasionally, we turn on the news and it hits me again with a shock or we have people pushing hate in our faces. I’m trying very hard to hold onto my love for the world, and I can feel some chinks happening again, but it’s so much better for my psyche if I push away the anger of the world. All you need is love! 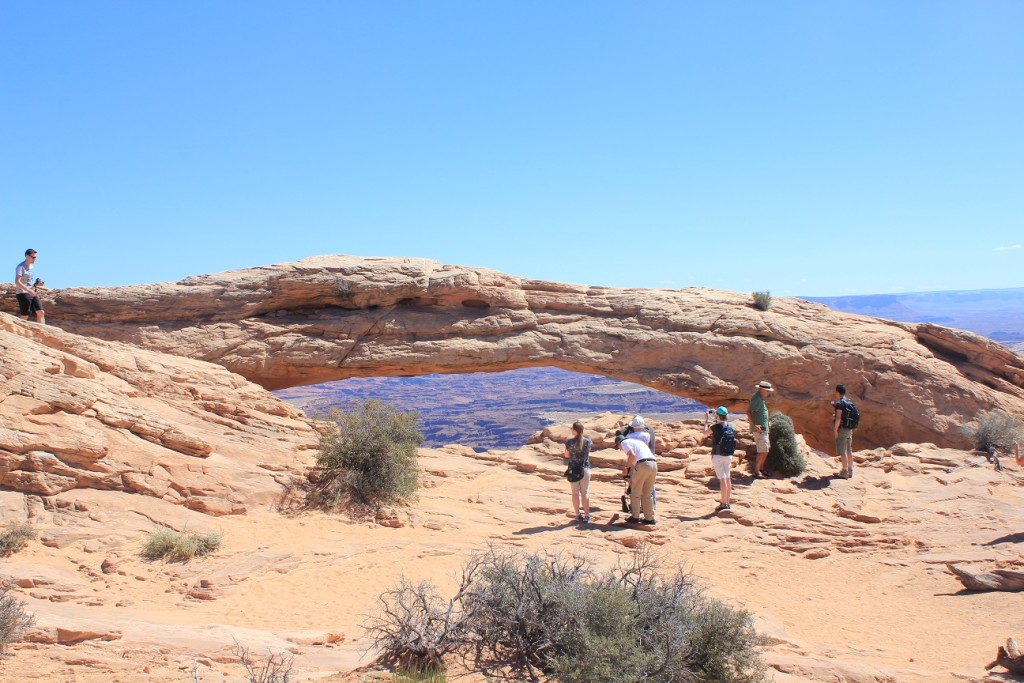 Canyonlands National Park
Neither one of us had even heard of this park. We find the name amusing. It sounds like an amusement park. Arches could be the Disneyland since it’s tamer and Canyonland would be the California Adventure – well except we’re in Utah. They’re right next door to each other, which makes it nice and easy. 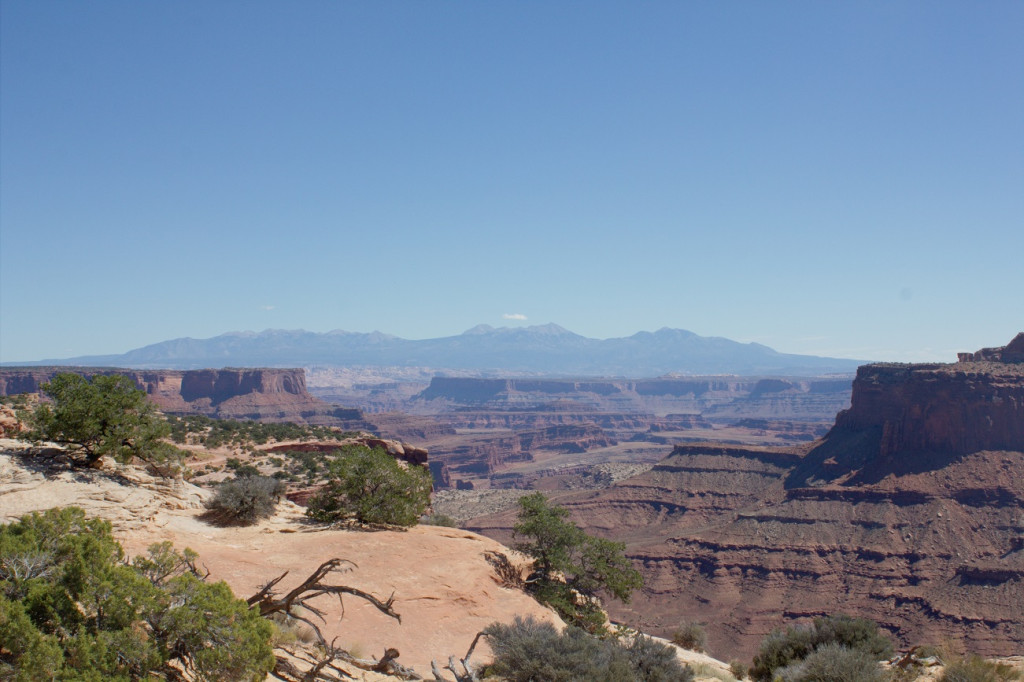 There are five distinct districts in this park and travelling between them can take between 2 to 6 hours by car. You have to go all the way around the park to get from one to the next. There are no direct routes.

We decided rather easily, to visit the Island in the Sky district. I read that while there were vistas that could be viewed from close to the road, the better views were to be found by hiking in a way. 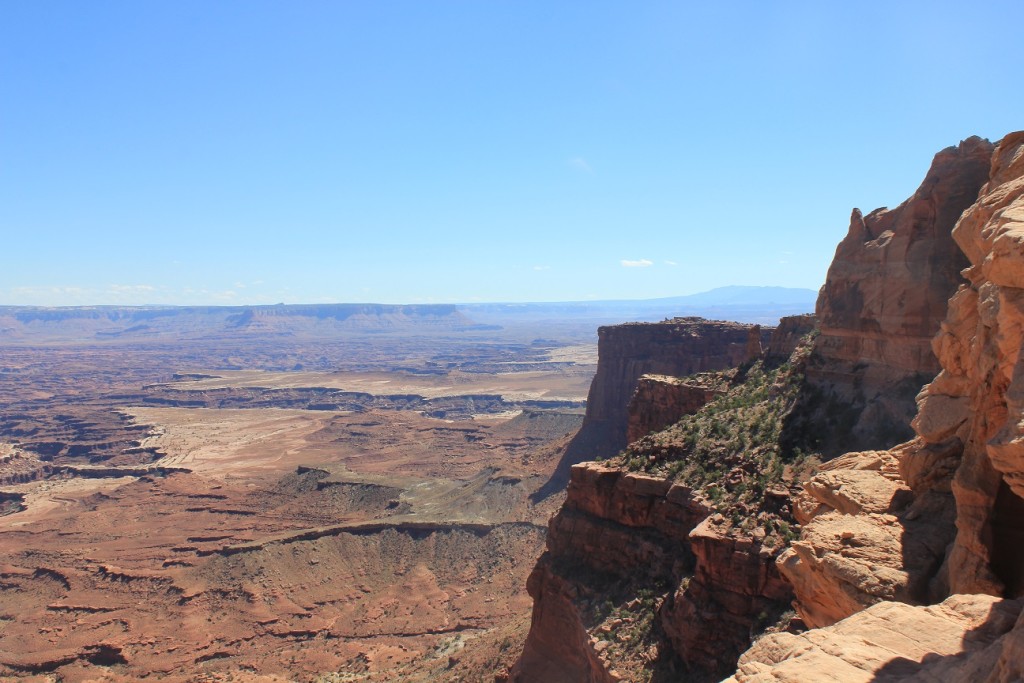 The pay booth was closed and we were directed to the visitor center. The parking lot was packed and there was a line-up to pay fees. Our America the Beautiful pass gets us free entry but we still had to line up to show it. Besides, we wanted a map and advice on where to hike. 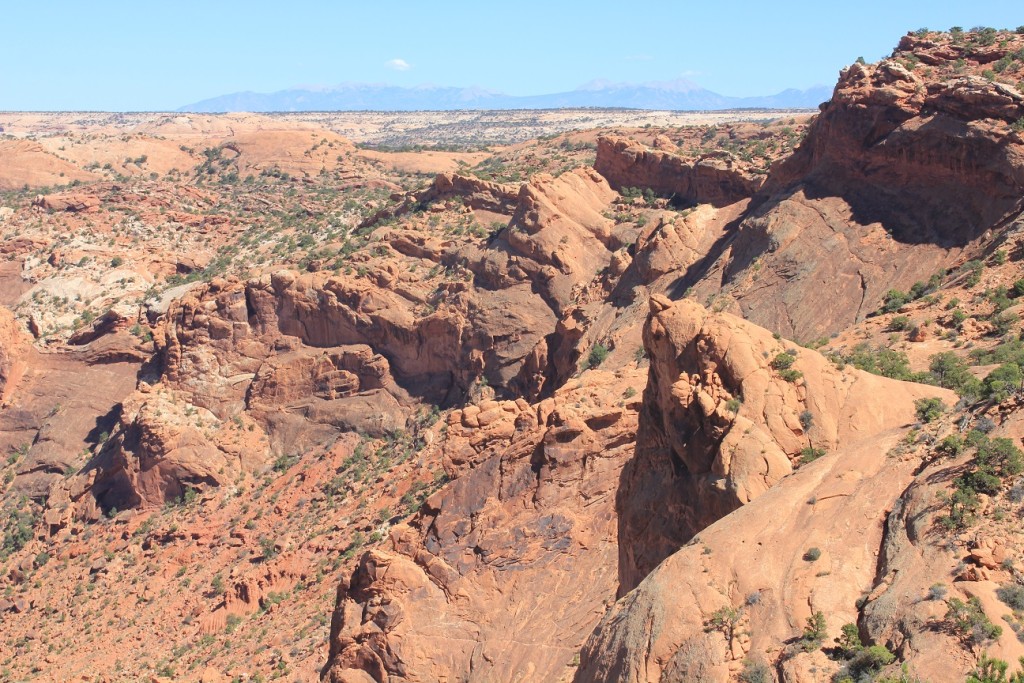 When we got up to the front of the line, the ranger viewed our pass, gave us our map, and then told us he had to get through the line behind us, and we’d have to wait for the other ranger for trail advice. We moved over and waited and waited and waited. The second ranger was spending all his time going through a Junior Ranger Activity book with a little girl, while her parents looked on. 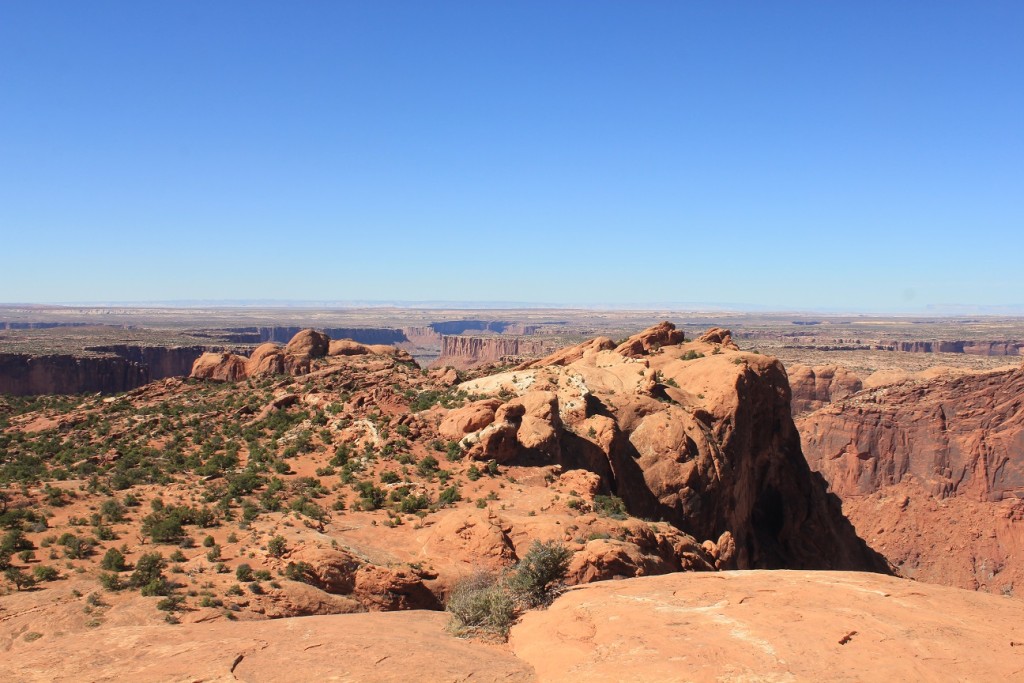 I understand that there is a very good program in the National parks to get kids excited about being outdoors, but when there is a huge line waiting and the guy is taking 15-20-25-30 minutes … and then I saw the other ranger – the very same one who had pushed us over to this line – giving advice to two young women, my patience receded quickly. As soon as he finished with them, I pushed over and asked again for his advice and he acted like he hadn’t just made us wait 25 minutes and treated us differently. 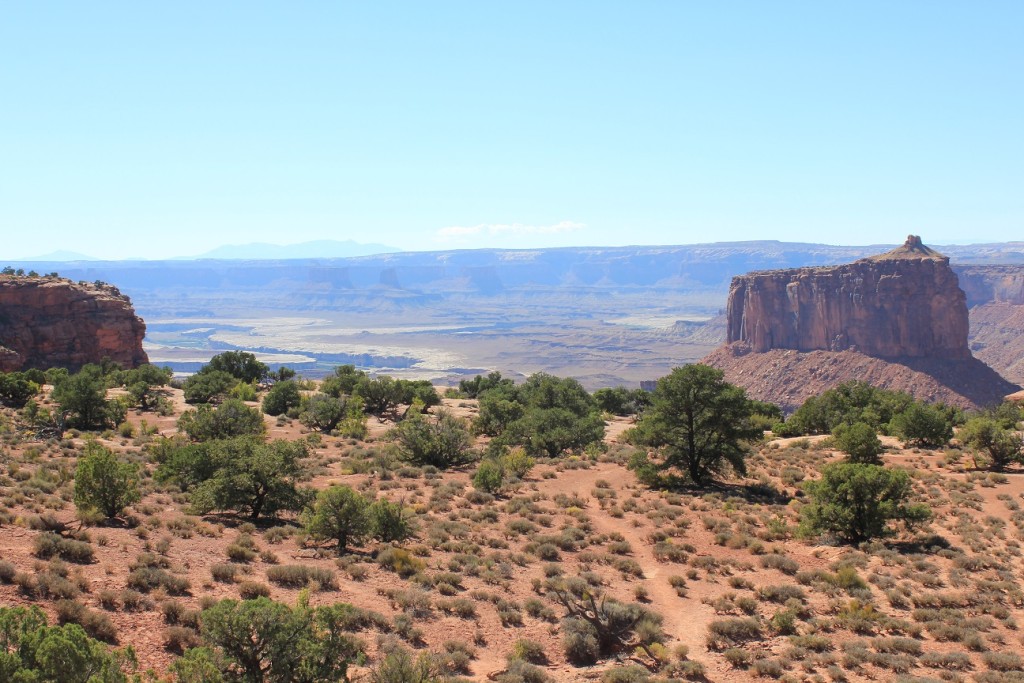 Patience Tracey, love the world, be happy, breathe in and out. I sucked back my displeasure, pasted a smile on my face, and asked my questions.  I noticed the kid was still there with the ranger when we left. Brat! Okay, that was uncalled for, but it gave me a small bit of pleasure. 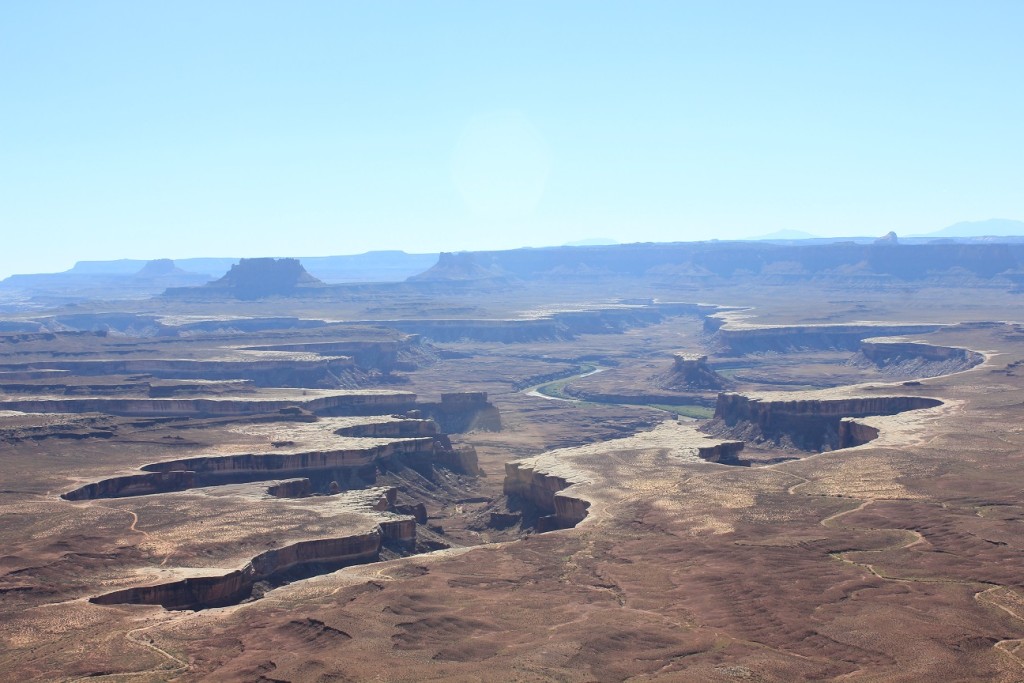 We first drove over to the Mesa Arch. The ranger had advised us that the hike to the arch was circular and if we wanted to have less people we should choose to go left. It turned out to be great advice. Everybody except for us took the trail to the right. I know we would have done the same, if not for the ranger. (Awwww maybe he wasn’t such a bad guy after all.) We North Americans are indoctrinated to walk on the right. Everyone we met up with was going the other way and a lot of them took the same way back. 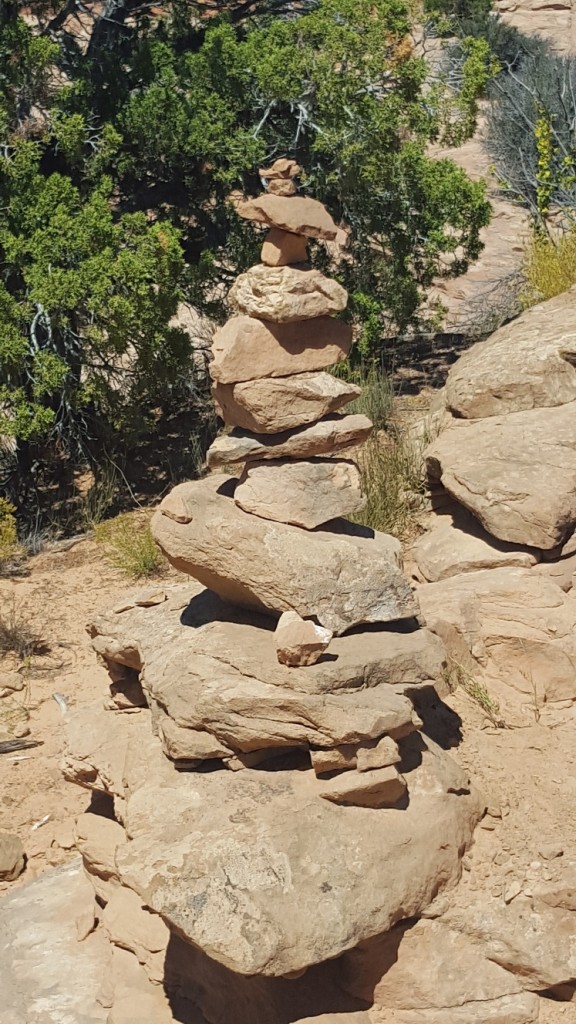 We started to notice a lot of Inukshuks on the trail. We have had a problem in our parks in Canada ever since the Vancouver Olympics brought these rock towers into fashion. You will find signs in our parks asking visitors not to build them and also to demolish any they find. Harold and I have a great time taking them down. So when we saw so many here, we didn’t hesitate in doing our duty. One of us would watch out for people coming while the other would kick or push them over. We’re like superheroes who use our powers for good, but we have to hide what we’re doing. Mere mortals won’t understand. 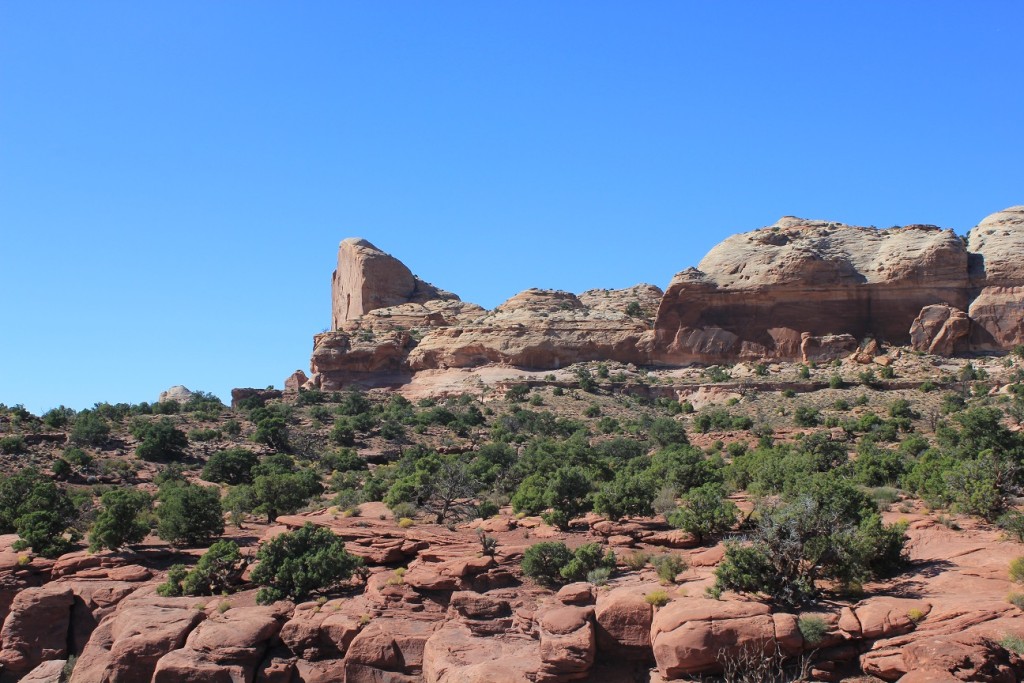 As a child and teenager, I was completely unafraid of heights and always trying to one up everybody else. I jumped out of more buildings, trees, piers and other heights than probably anyone else I knew. I could never resist a dare, and I had absolutely no idea that I could be hurt. Luckily, I almost never was. 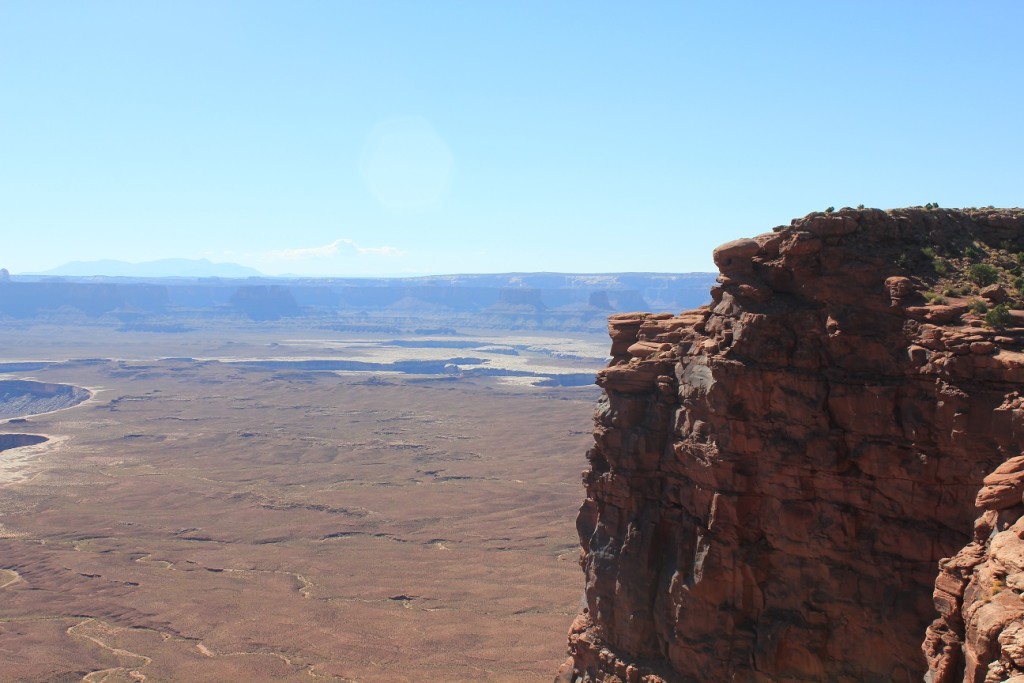 Something changed when I became a Mother. All of a sudden I saw the danger in everything. All of a sudden I was afraid of heights, cliffs, bridges, roads to nowhere, flying – if it involves a height, I’m afraid. I refuse to let it change my life so I force myself to go on roller coasters, cliffs, bridges and high roads to experience the heights. I don’t enjoy them, but I do love the vistas. 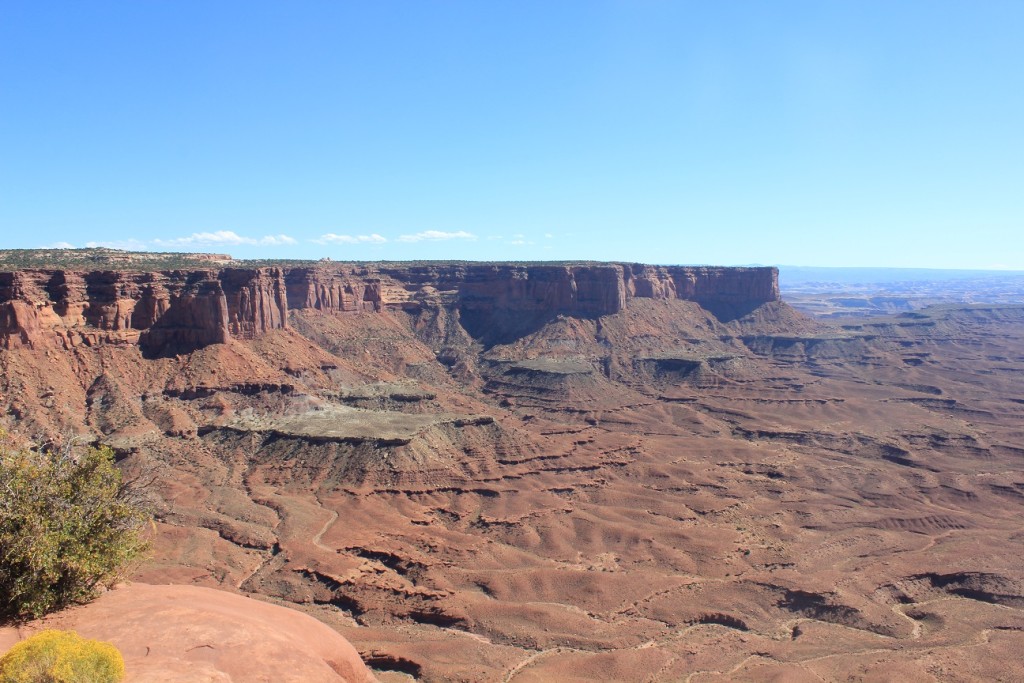 Our second hike was up to the northwest, hiking up and around the perimeter of the Upheaval Dome. The vistas were amazing, the heights were dizzying and the altitude makes hiking much more difficult. We scrambled up and down rockfaces to the next lookout and it was absolutely amazing. My awe at the beauty around us was only matched by the horror I felt every so often as I imagined falling down and down and down into the chasm far below us. 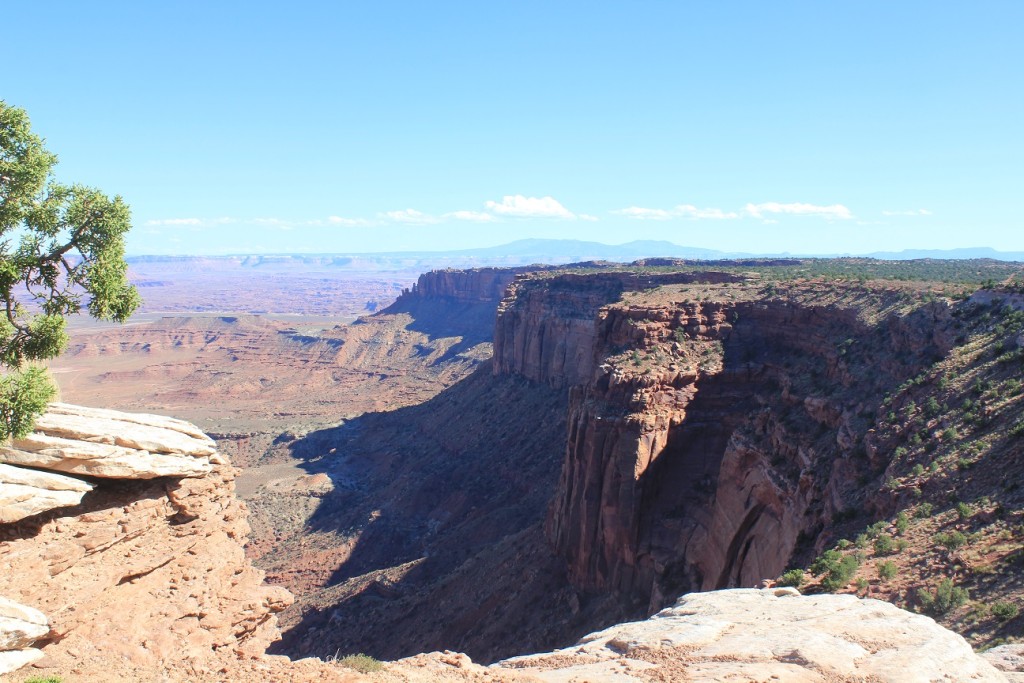 It was on this second trail that we began to see a reason for the man-made rock towers. It was difficult at times to see where we should go to follow the trails. The rocks were being used as trail markers. All of a sudden we felt like huge jerks. Now I know how a superhero feels when they find they made a mistake. In our defence, that first trail hadn’t needed them and someone had created a ton of them, littering the landscape. We kept our superpowers under wraps for the rest of the day. 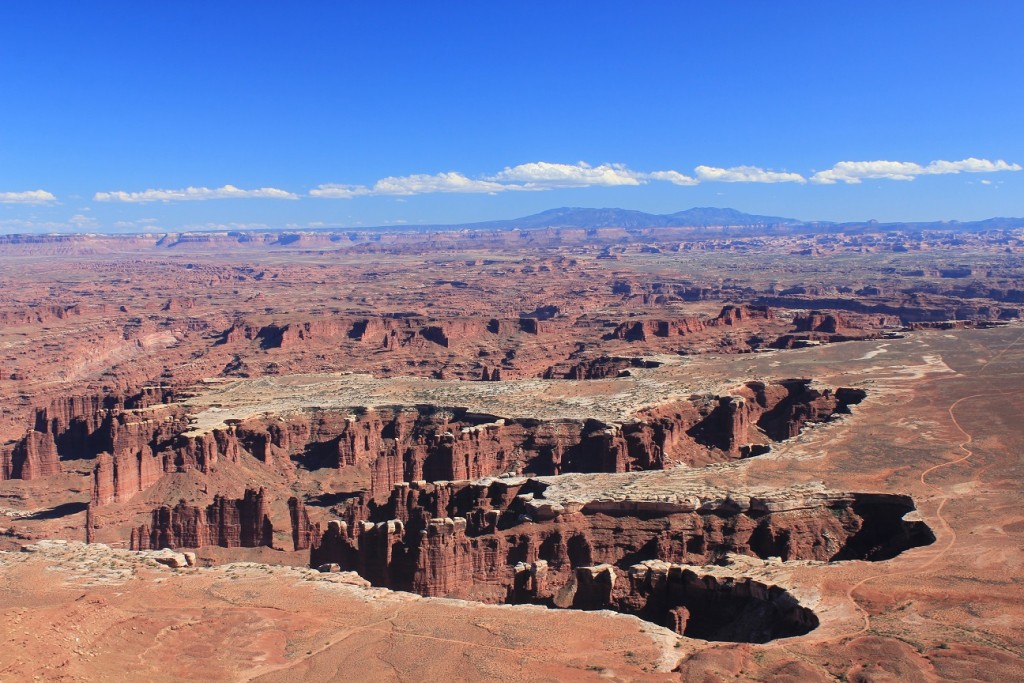 We met some really nice people along the way. One man, who appeared to be in his late 60’s or early 70’s, had an amazing voice. It was one of those voices you could listen to forever. I wondered if he had been a radio announcer. He had the looks too, so I could have imagined him as a tv commentator as well. Harold remarked on his camera equipment and that started up a conversation about the best places to get photos in the park and how he keeps coming back to this park for more. It’s one of his favourite places. 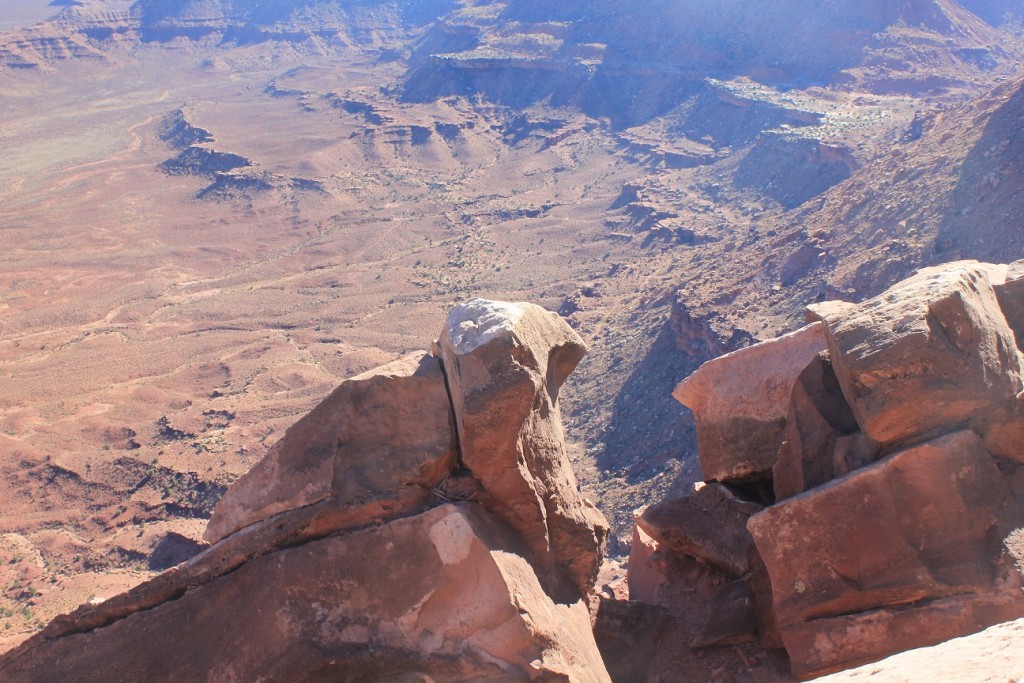 We met up with the same young women who had been treated special in the ranger station, but I didn’t hold that against them. They were very friendly and outgoing and I enjoyed watching them being adversarial with each other. They were my kind of women, just a generation behind me. 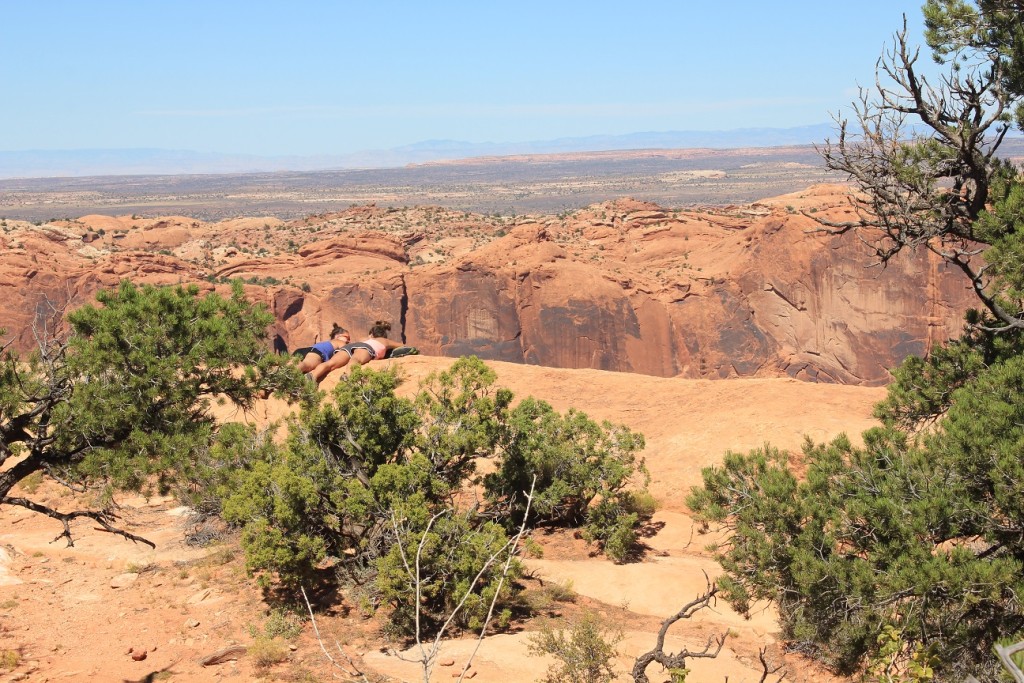 Most of the other people on the trail were couples, and a lot of them were Germans. Hiking really seems to be a couples activity, more than running or cycling. 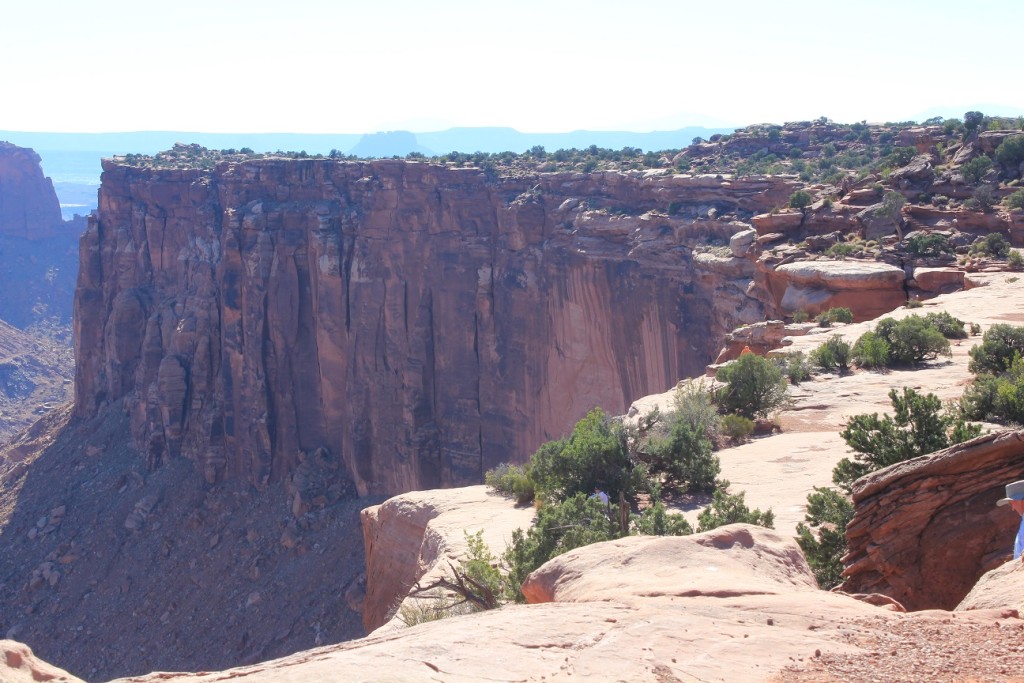 A few hours later we were back in the truck, and off to the next vista. Hiking here really takes a lot out of us. With elevations from 5,000-7,120 feet, it’s not enough to give us altitude sickness, but it is enough to make us huff and puff, trying to suck in as much oxygen as we can.

It was a wonderful day, the temperature was hot on the rocks, but there was a nice breeze and coolness in the shade, the views were amazing, and the company was the best. Man, we have a great life!

I can’t bypass the starving dogs of Kayenta without wondering …


Warning: Use of undefined constant comment - assumed 'comment' (this will throw an Error in a future version of PHP) in /home/customer/www/thisawayz.com/public_html/wp-content/themes/lovecraft/comments.php on line 15
2 Comments