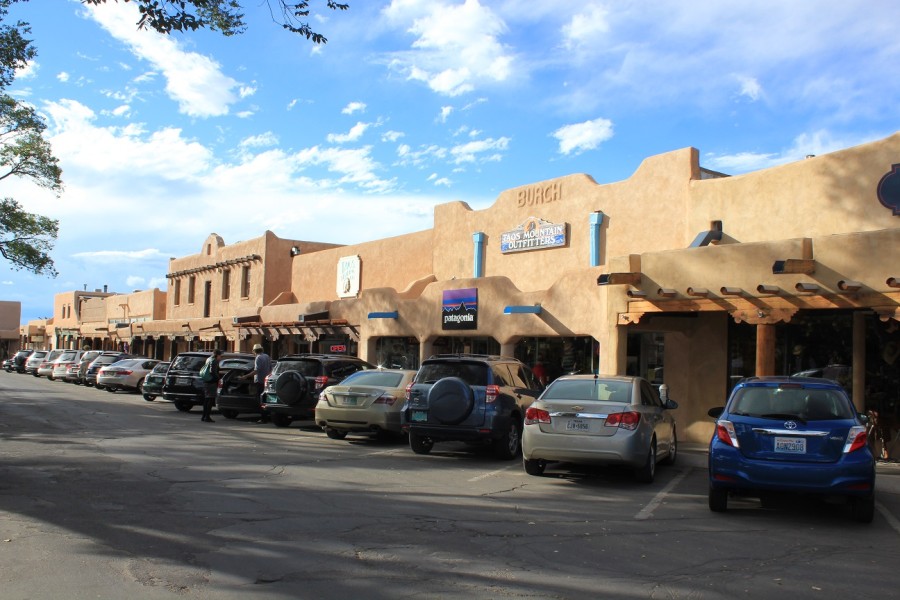 My overall impression of Taos is that it’s a more hippie-ish version of Santa Fe. It’s a little rougher, a little wilder, and there are a lot of older RVs that move around from one parking lot to another. I’m not being negative – for me, these are all pluses. Add in creativity, amazing food, culture and a laid back attitude, and it’s a great place to be. 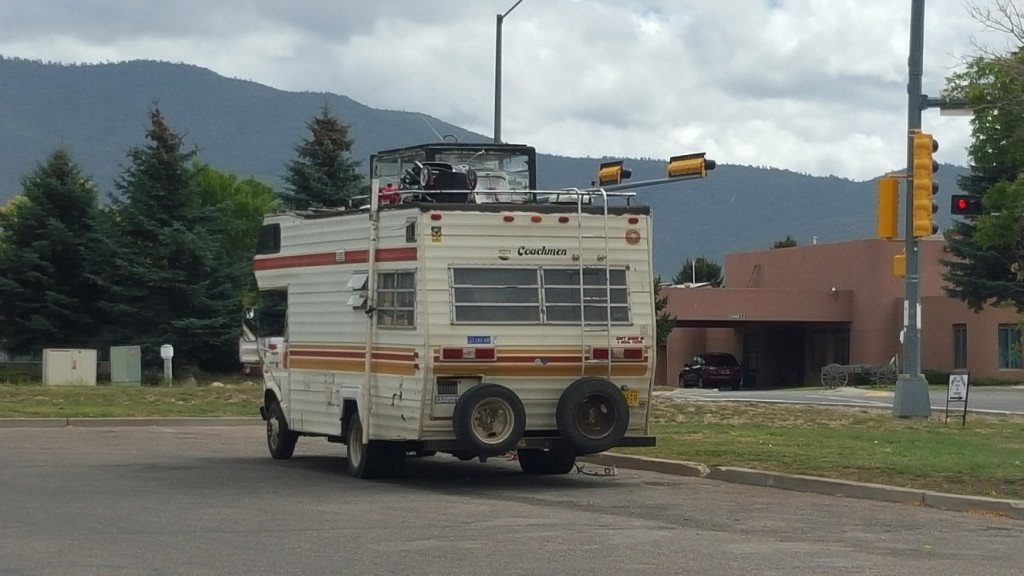 I love the pop-up sunroof on this RV! I hope it’s waterproof.

I always have the best of intentions to go to the visitor center as soon as we get to a new area but so rarely make it there. This time, the center was just a block away from the rv park we were staying at, and we actually spared the ten minutes to go in. It was well worth it, as the woman gave us ideas about the best way to spend our time in the area. Mental note: Do this more often! 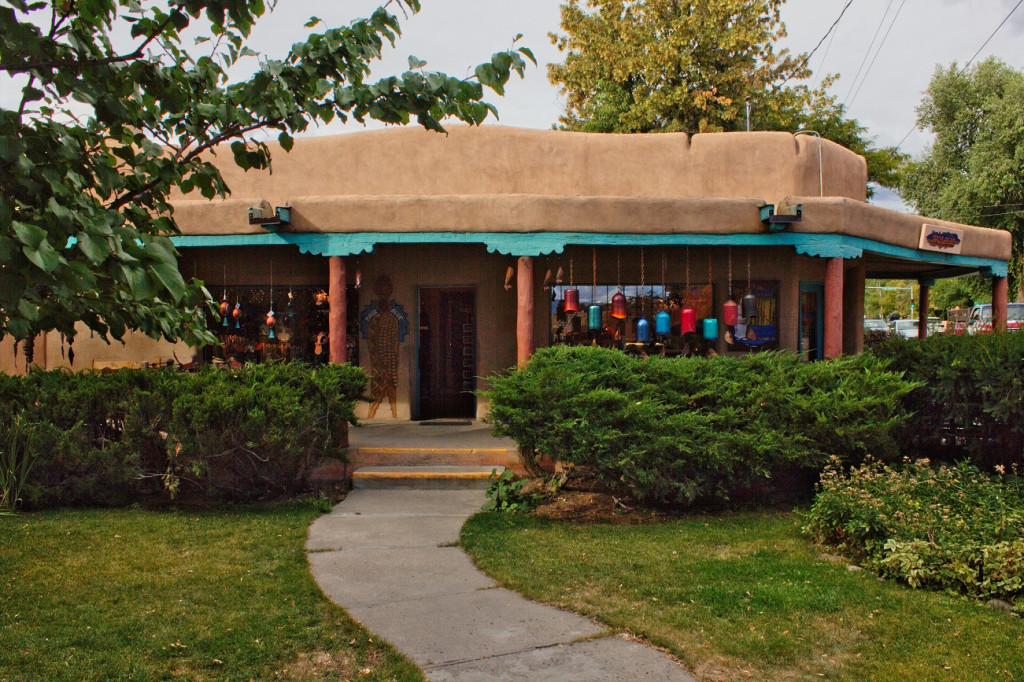 Our first afternoon, we headed to the old town. The woman at the visitor center showed us a few places we could get free parking, so we parked over by the auditorium and walked over. We wandered down Bent Street, named after Governor Charles Bent, and stopped in to taste some wines at La Chiripada El Bosque. The only wine we found to our liking was an expensive one (Well, actually it was only $30 – are the cheap US wines making us wine cheap?) Besides that we still have a trailer full of alcohol we never used at Burning Man. I felt guilty not buying a bottle, but instead we paid for the tasting and purchased a logo wine glass for our collection. 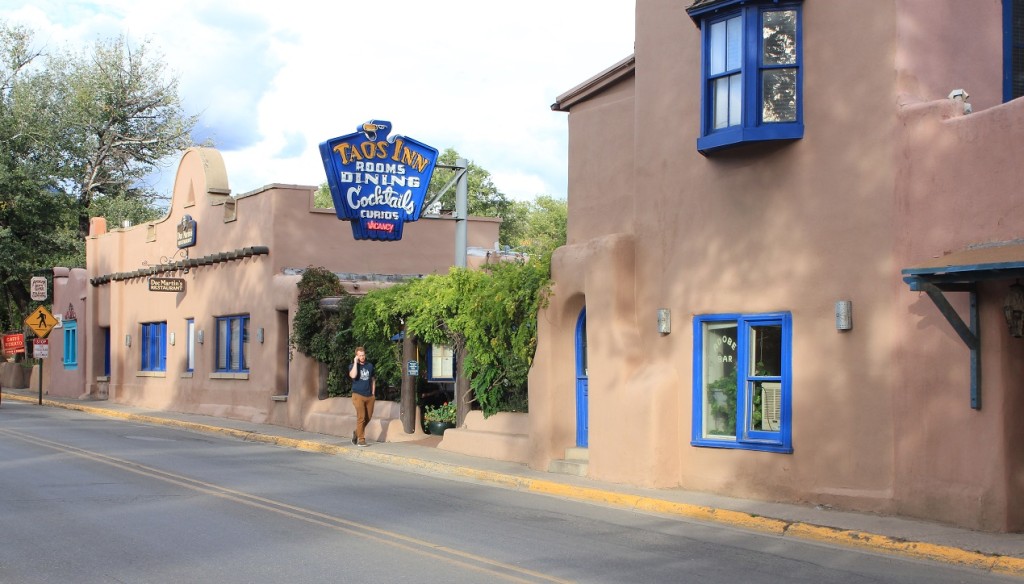 When I think of New Mexico, wine is not one of the industries I think of. The Franciscan monks required sacramental wine. At first, the monks were not allowed to make their own wine. They had to travel by mule to the coast to bring back their sacramental wine, which had been shipped from Spain. Eventually the restrictions were relaxed, and the first wine grapes were planted in 1629 by the monks. This was 150 years before the first California grapes were planted. 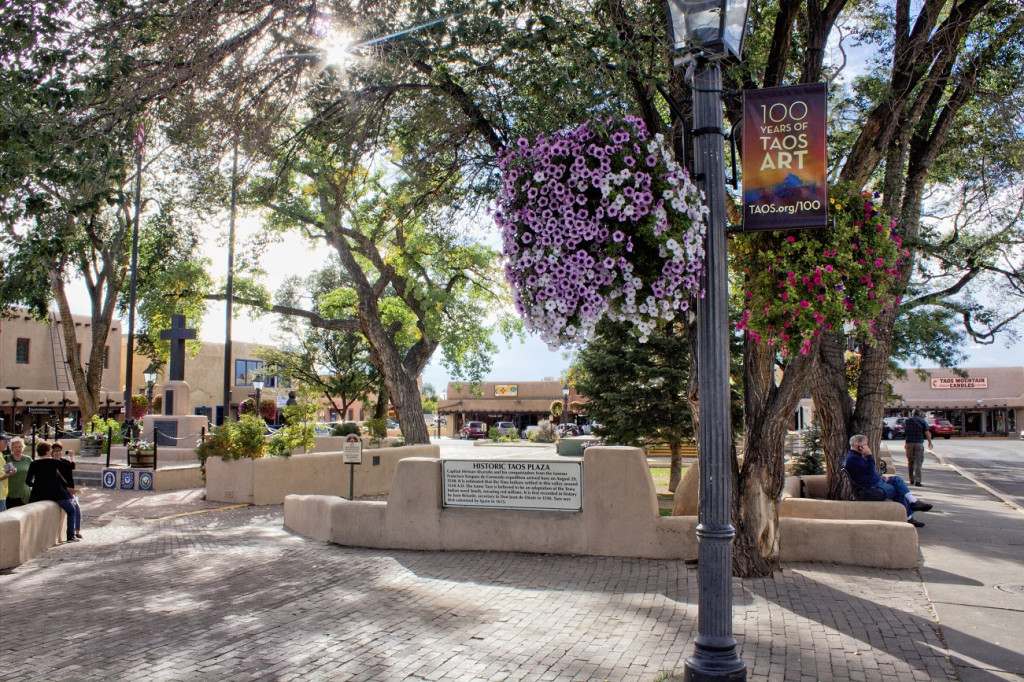 In typical New Mexican style, the main area of the old town is centred around a park, with roads surrounding it on all four sides and stores lining each street. On the south side is the Hotel La Fonda de Taos. The first hotel was built on this site in 1820, and managed to escape many fires. The stores sell touristy items, some very kitschy, others much more expensive and artistic. We’ve been looking for some nice – but not super expensive – ponchos all over the south-west, and we continued our search here, with no better luck. We’ll know them when we find them. 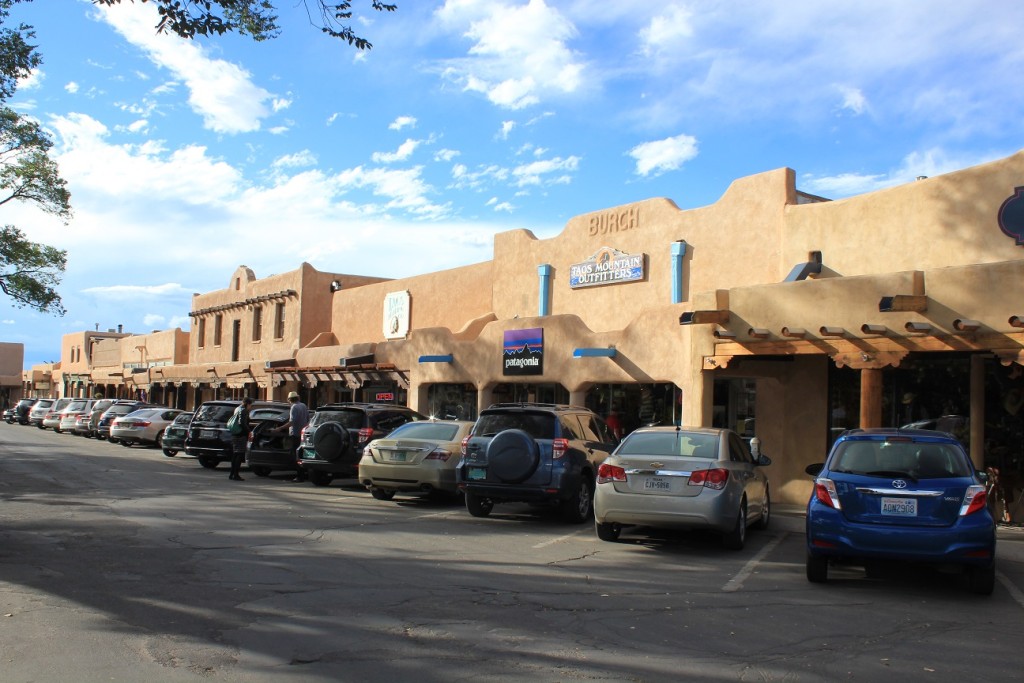 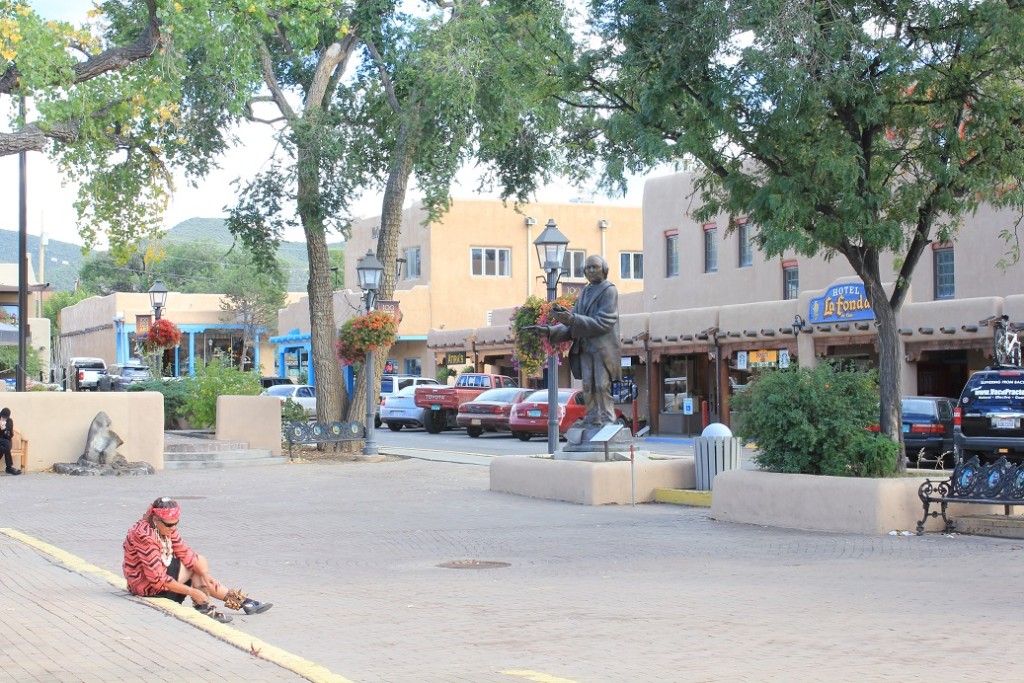 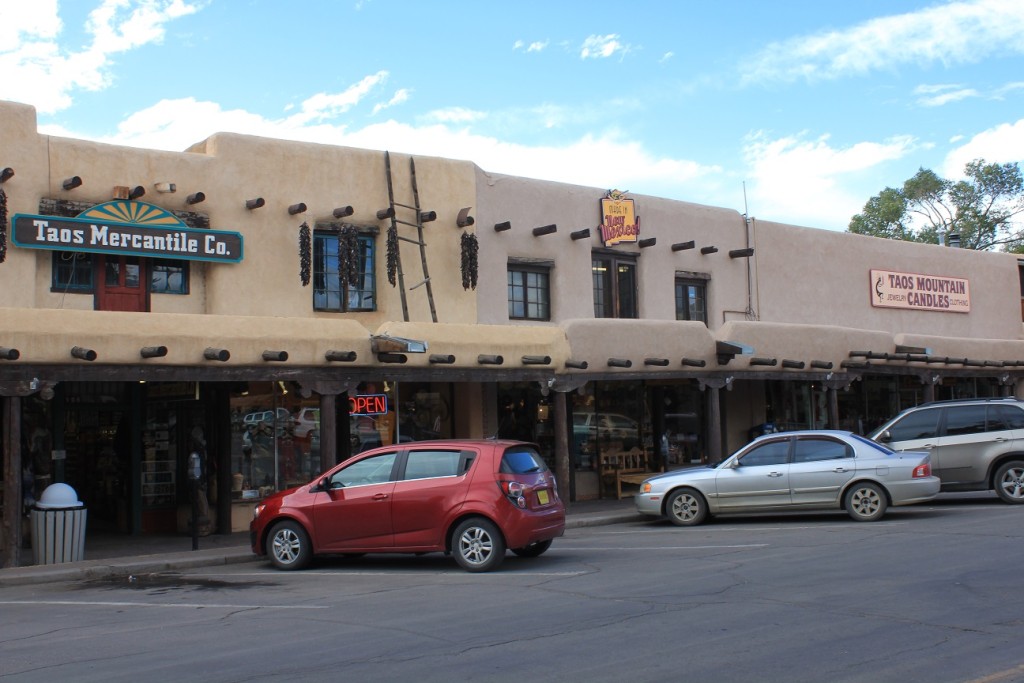 For dinner, we looked around the downtown but nothing appealed to us as much as the place the woman at the RV park and the woman at the visitor center told us about. Ranchos Plaza Grill is just south of Taos,  right off highway 68, in the tiny community of Rancho de Taos. 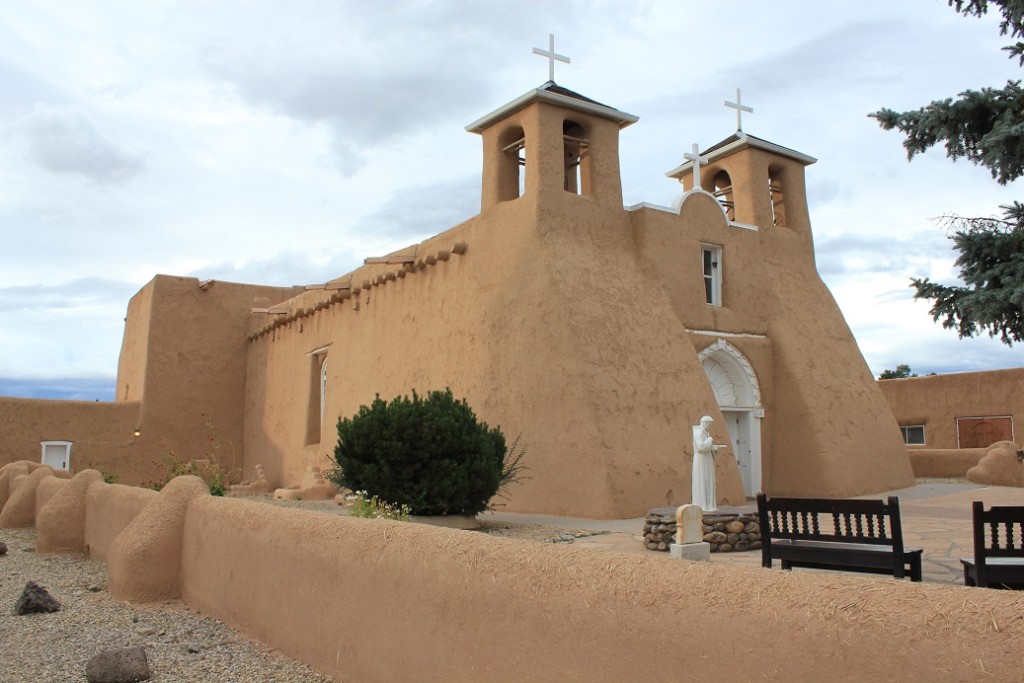 The focal point of the plaza is the San Francisco de Asis Mission Church, a World Heritage church and National Historic Landmark. Built of adobe, between 1772 and 1816 by Franciscan Fathers, it was the centre of the fort protecting against Comanche attackers. Located around the church is a plaza lined with small stores and the restaurant we were headed for. 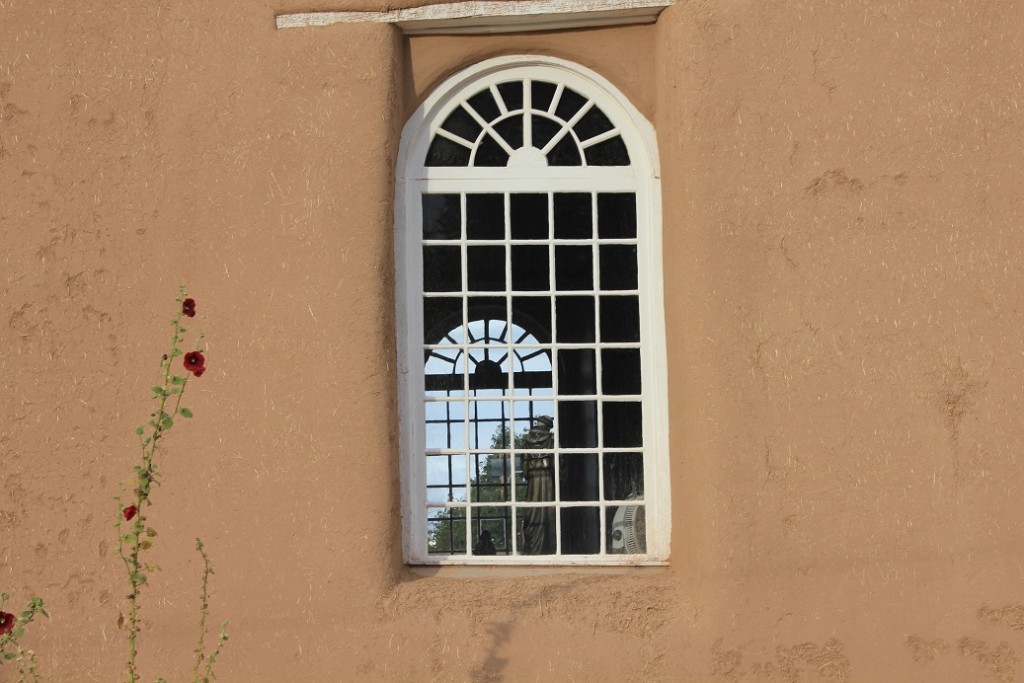 There was a 30 minute wait for dinner and I was a little disappointed that they didn’t serve alcohol there, but we stayed because we had high expectations. 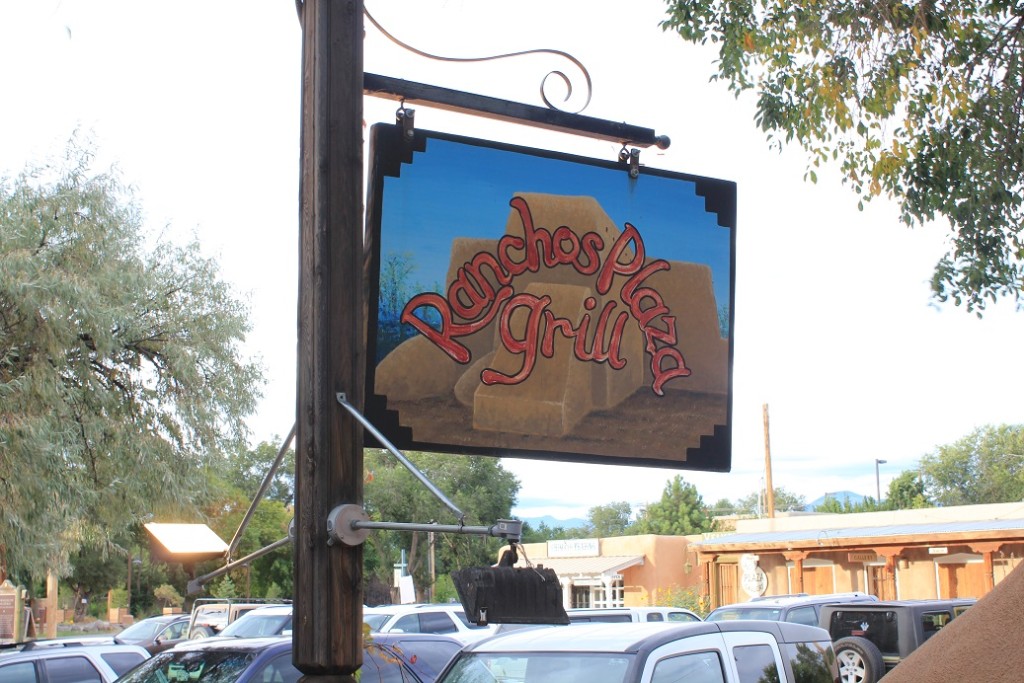 The service was very slow and kind of unprofessional, which made me question what we’d heard about the place. I ordered the enchiladas with the vegetarian green chile sauce and Harold had a burrito with the red chile sauce. Green sauce is always the hotter one, but I had no choice, the vegetarian only came in green. Harold should have ordered the green as it was a bit too hot for me, but just perfect for him. Even so, we were both blown away by how great it was. This was only our second sampling of New Mexican food and both have been absolutely amazing. I have to say the chile sauce is what puts it over the top. I prefer New Mexican to even the best Tex Mex. 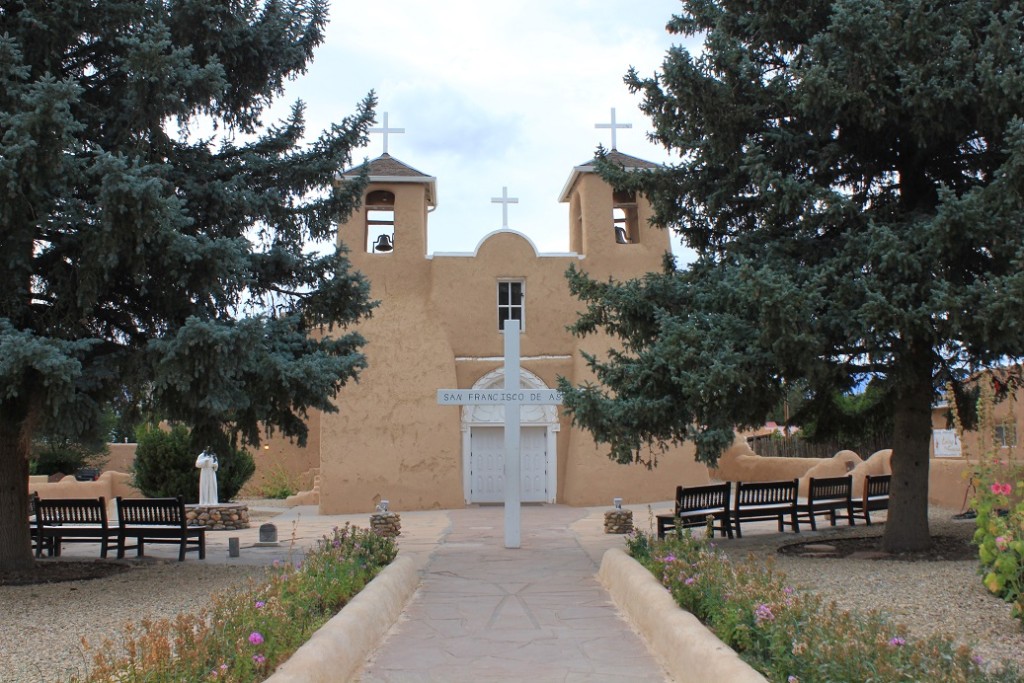 I’ve never had a sopaipilla before and the ones we had here were absolutely amazing. Harold told me he used to call them “softpillows” when he had them in Arkansas as a kid, but he felt these were the best he’d ever had. Not surprising since they were first conceived of in New Mexico. It’s a kind of fried pastry made from leavened wheat dough and shortening or butter. After rising, the dough is rolled out into sheets, and cut into shapes, which are deep fried so they puff up with a pocket in the middle. (Hence Harold’s butchered word for them – softpillows.) They can be stuffed with savory items for an entre or left plain as a dessert item, to be slathered in honey. In one meal, they became my favourite dessert – even better than Tiramisu! 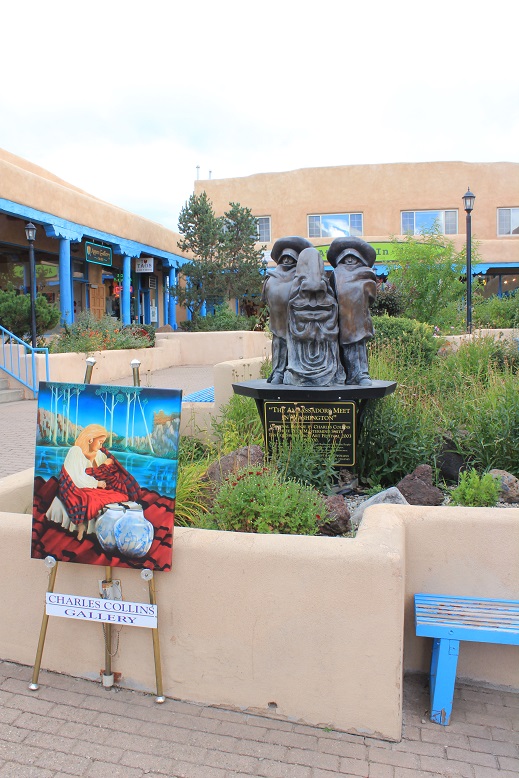 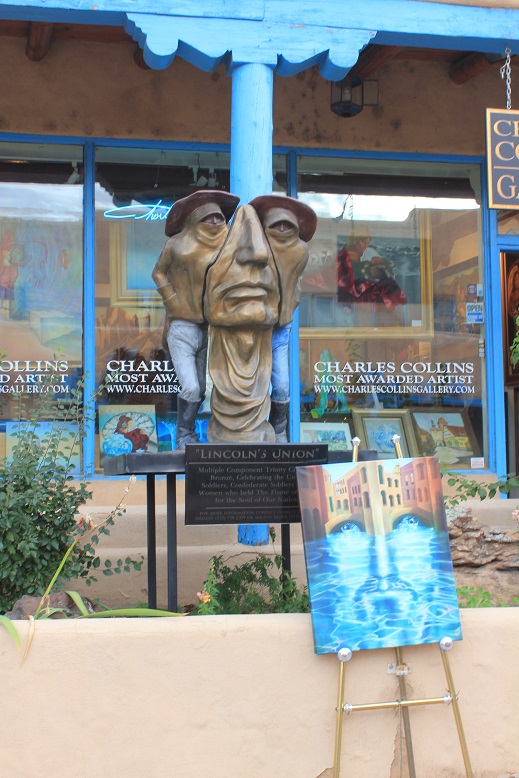 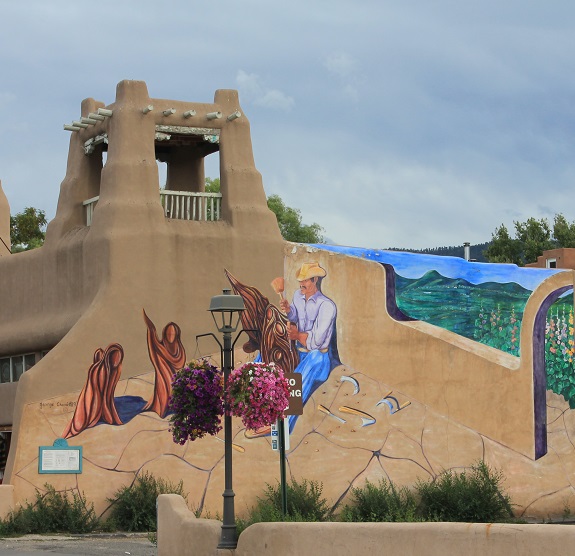 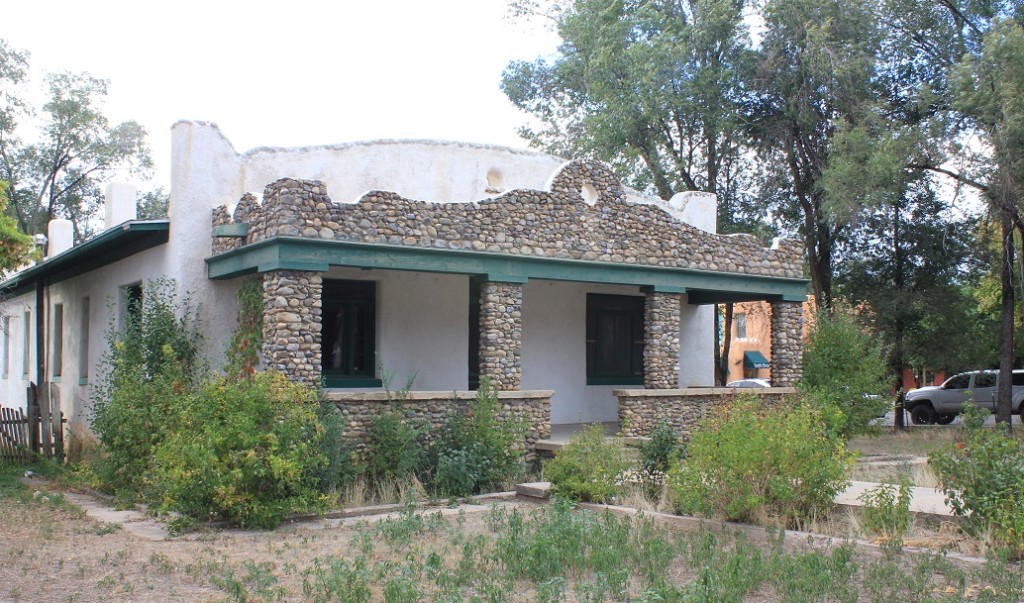 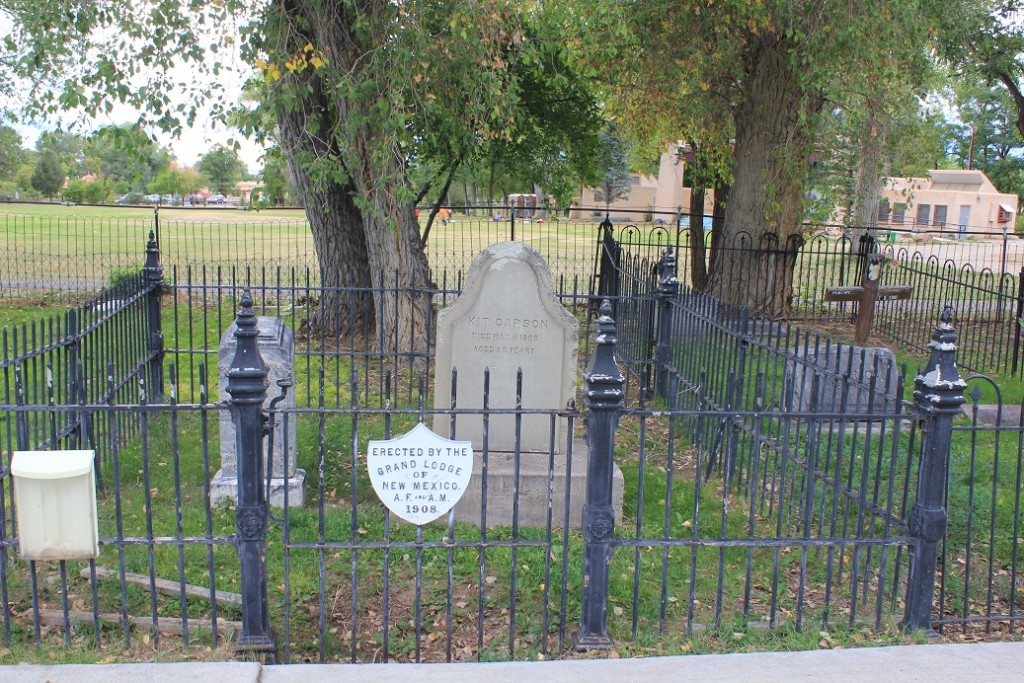