The town of Wendover is split right down the center. The casino side is in Nevada, the seedier side is in Utah. We’re about a block from Nevada here. Harold just pointed out to me that we’re now in mountain time, but a block up the road it’s Pacific time. So which 10am did the driver mean? We decide to be ready for 10am Mountain time and see.

When he still isn’t here at 10:30am Pacific time, we figure there is a problem. Harold walks up to the garage and talks to the guy there. He says he’ll call the mechanic and make sure he’s coming in. 30  minutes later, he’s still not here, and now the guy is gone from the garage. 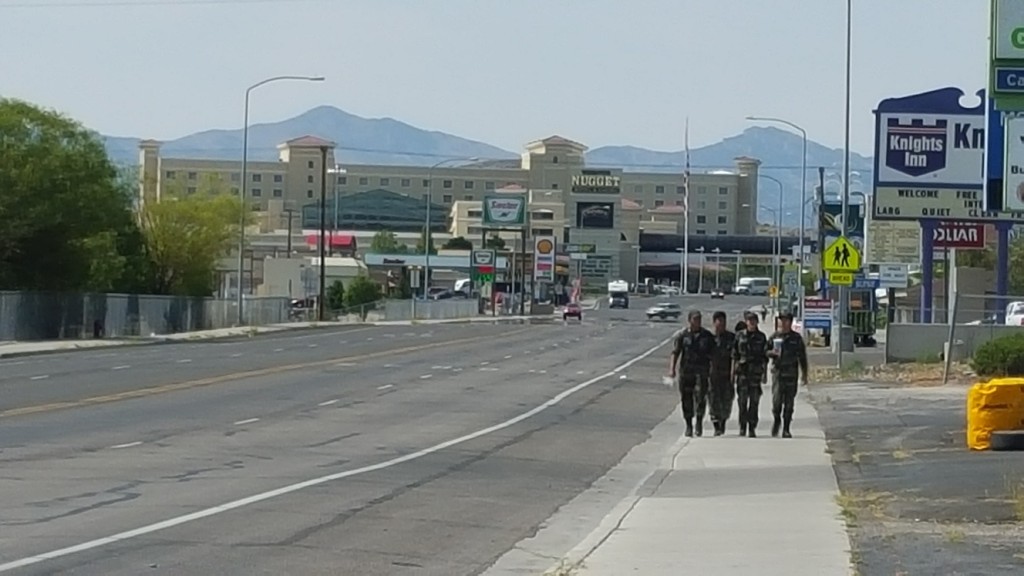 I call the dispatch and they tell me he was out drinking last night and slept in. Yeah, that makes me feel good. Amazing way to instill customer confidence. 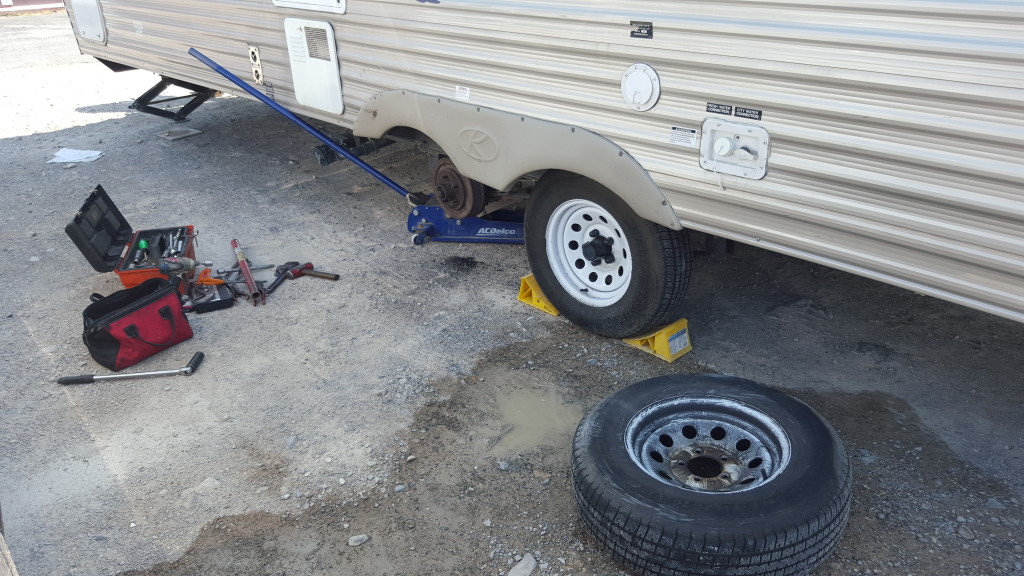 About 1pm Mountain time, the mechanic shows up. He jacks up the trailer (I quickly work out that a 3.5 ton jack is more than capable of holding up one quarter of a 7500lb trailer – yeah no trust left here) takes off the tire, and starts trying to get the spindle nut off the axle. As he’s wrenching and pulling he groans, “This doesn’t look good.” 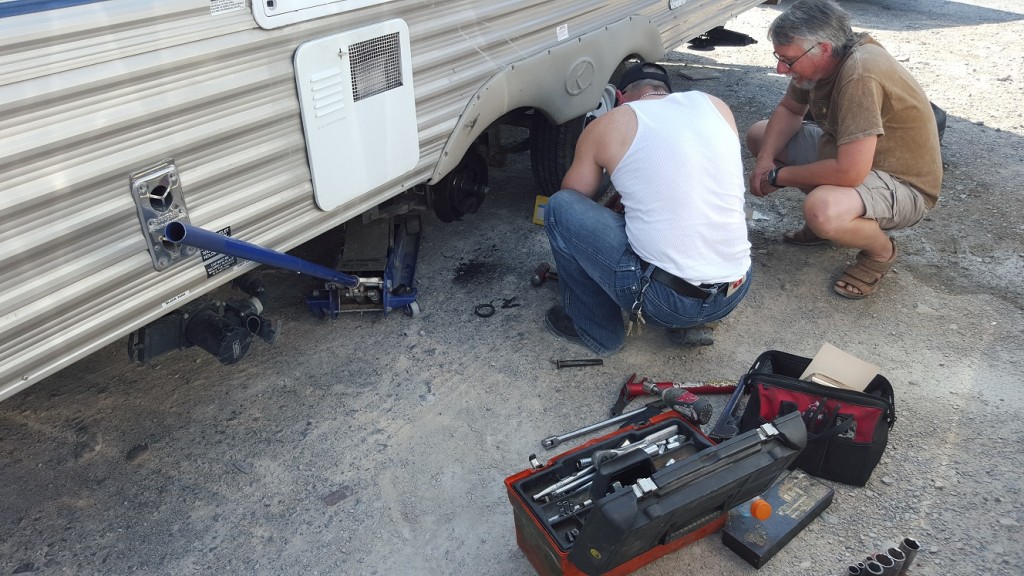 I decide I need to get away from here. I can’t stand when people look over my shoulder and I’m having a hard time restraining myself from getting stressed out. I grab a lawn chair and move over to the sidewalk in front of the motel office. “No vacancies!” it says on the window. They sell out this place? Must be full timers. I look into the pop machine and see a bunch of empty dusty smacked up cans, but the hum of the machine seems to imply it still works. No thanks. 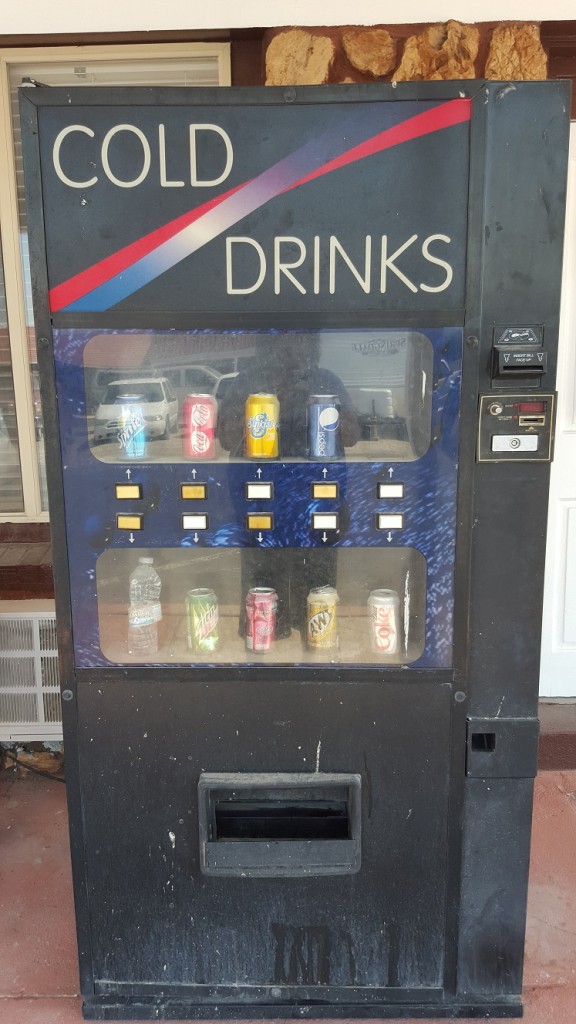 15 minutes later, the nut is off, but the threads on the axle are stripped. “Might need to get a whole new axle.” the mechanic says and I hear cash register dings going off in my ears. What does an axle cost anyway? That sounds so expensive. I take pictures of the stripped threads, in a barely believed hope that it might be salvageable, then we get the dogs loaded up into the truck and we’re off to Salt Lake City. 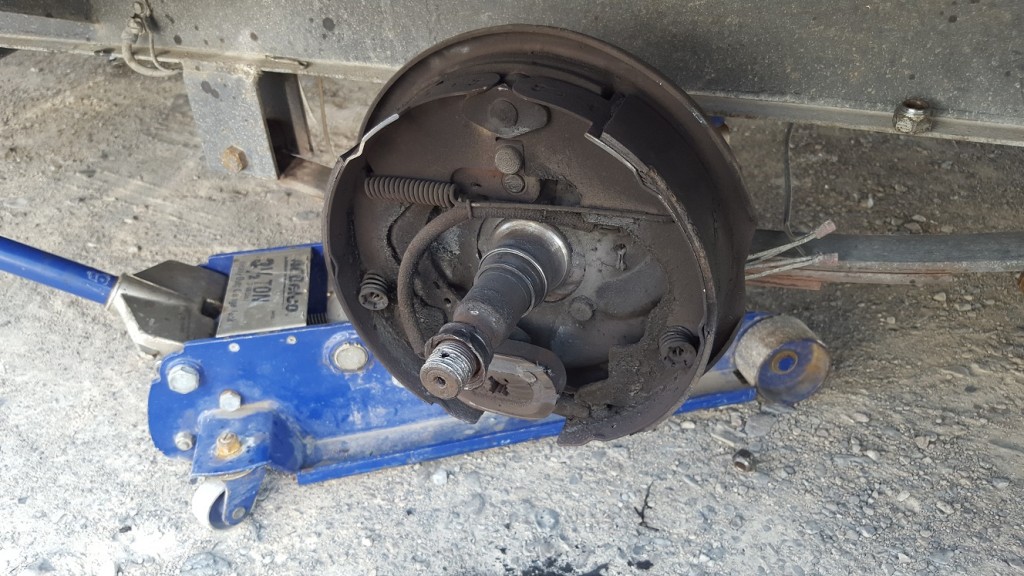 The drive was monumental to start off, going over the Bonneville Salt Flats, where Motorcar racing has taken place since 1914, and many land speed records have been set. Access is free, and anyone can drive on the salt flats. We opted to take the road. 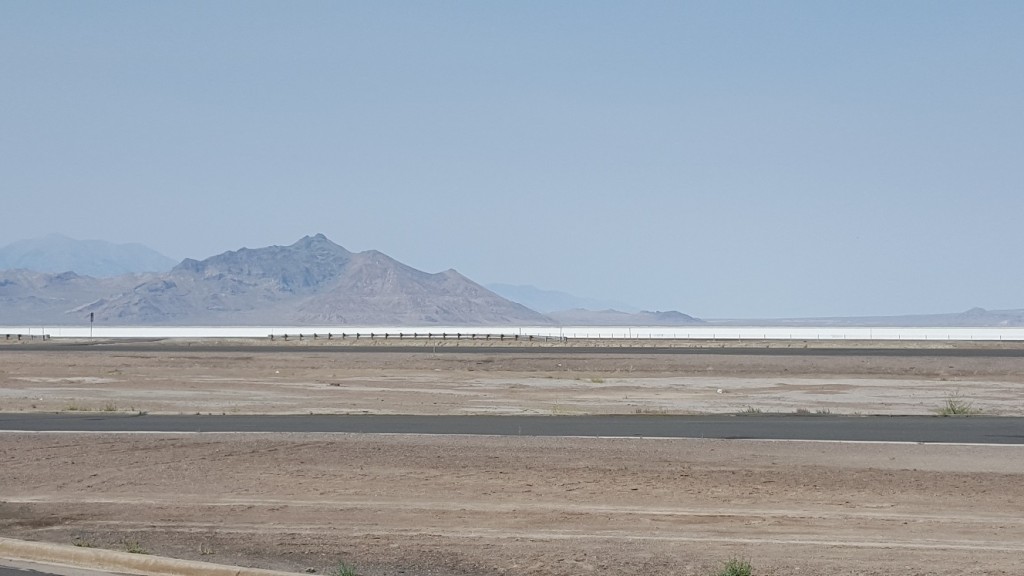 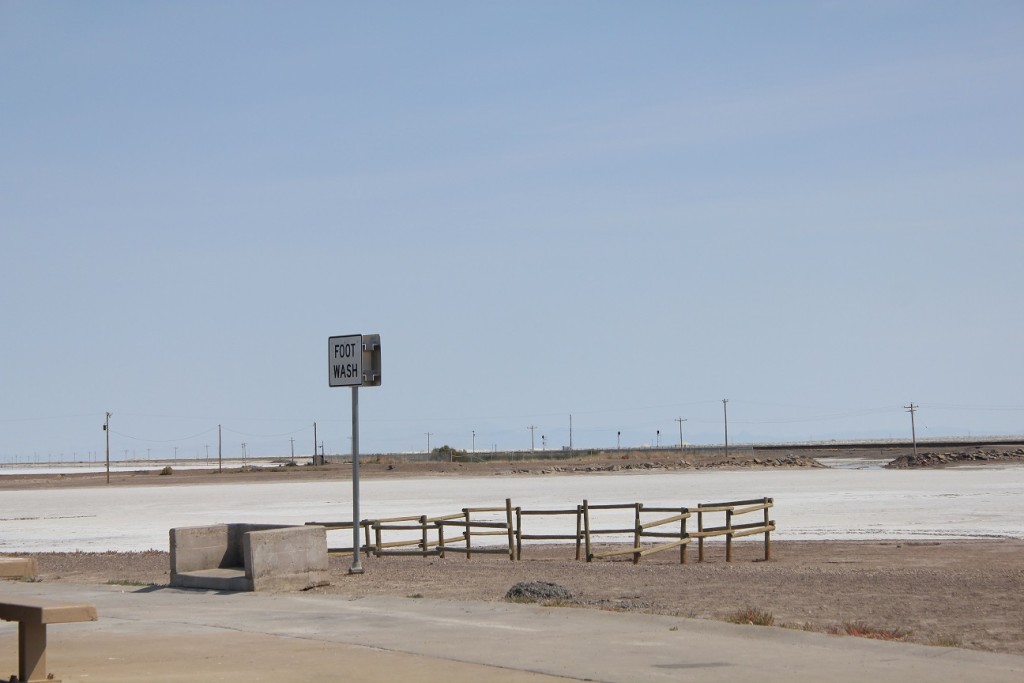 The place we’ve been told to go is called State Trailer Supply, in West Valley City, UT, just south of downtown Salt Lake City. It turns out to be pretty similar to a Camping World. The parts guy has worked here for forty years! He looks at my pictures and dashes my hopes. “Yeah, you’re gonna need a whole new axle.” 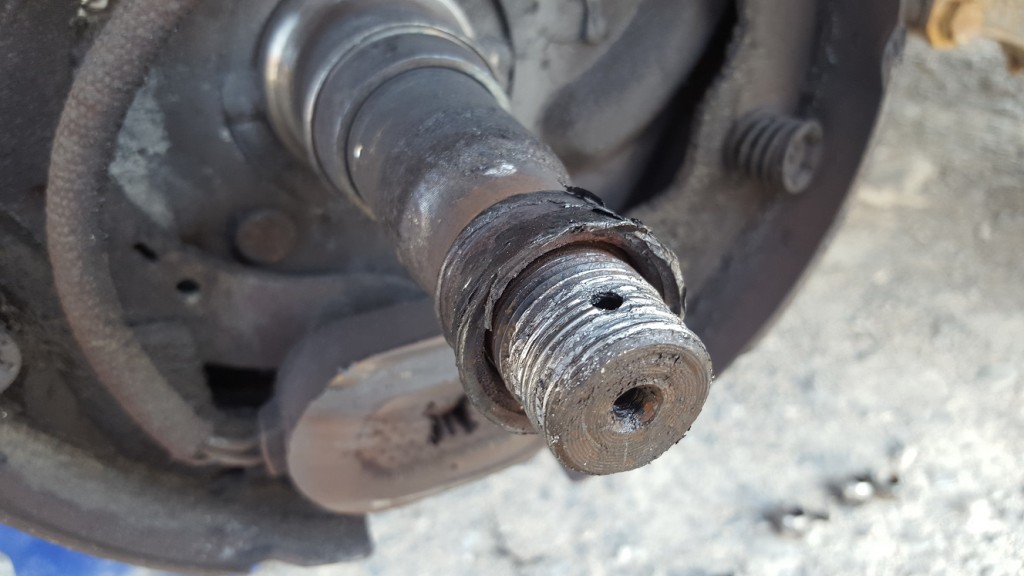 He gives us a form that needs to be filled out with all the dimensions of the axle. Harold calls the mechanic but confusion sets in. The mechanic says he’ll call back with the measurements, but I’m not feeling good about this, especially noting the line on the bottom of the form that says “No refunds for special orders!” So when the mechanic calls back Harold puts the parts guy on the phone with him, and I relax. 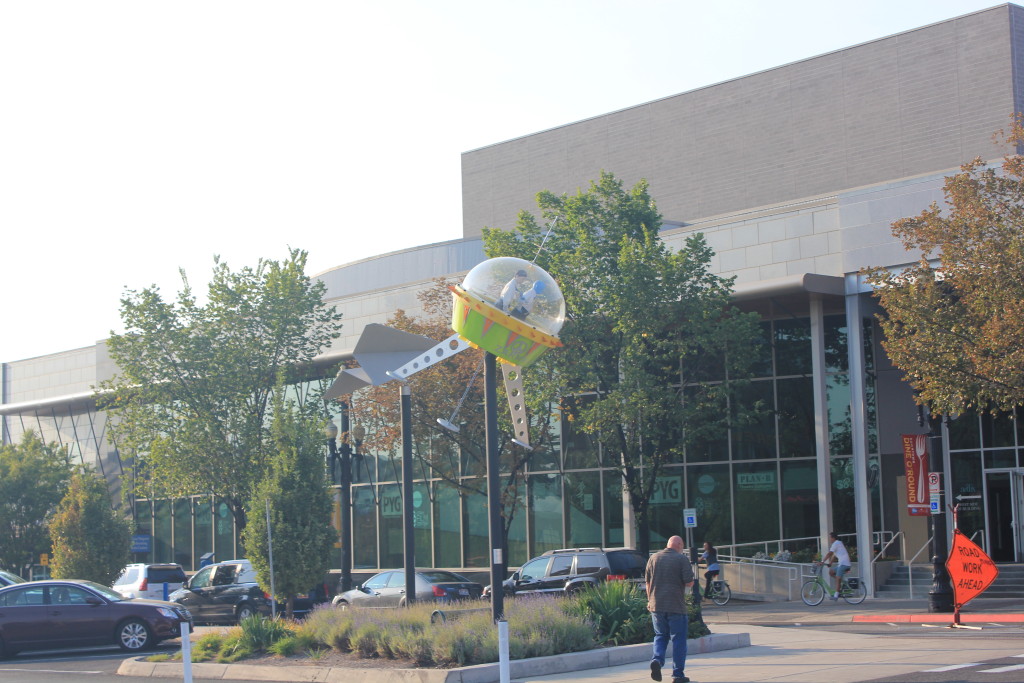 Once the parts guy has all the numbers, he hangs up, and gives us the news. “We don’t have it in stock and I can’t find out if there is one available until Monday morning.” 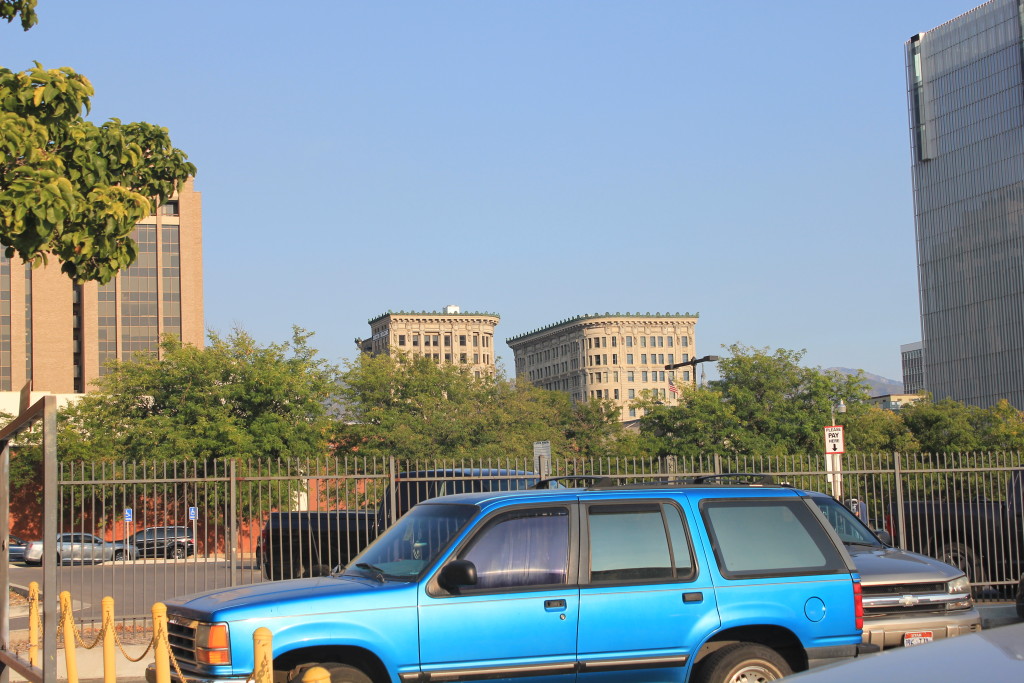 “If it’s available, how long will it take to get here?” I ask, afraid of his answer. 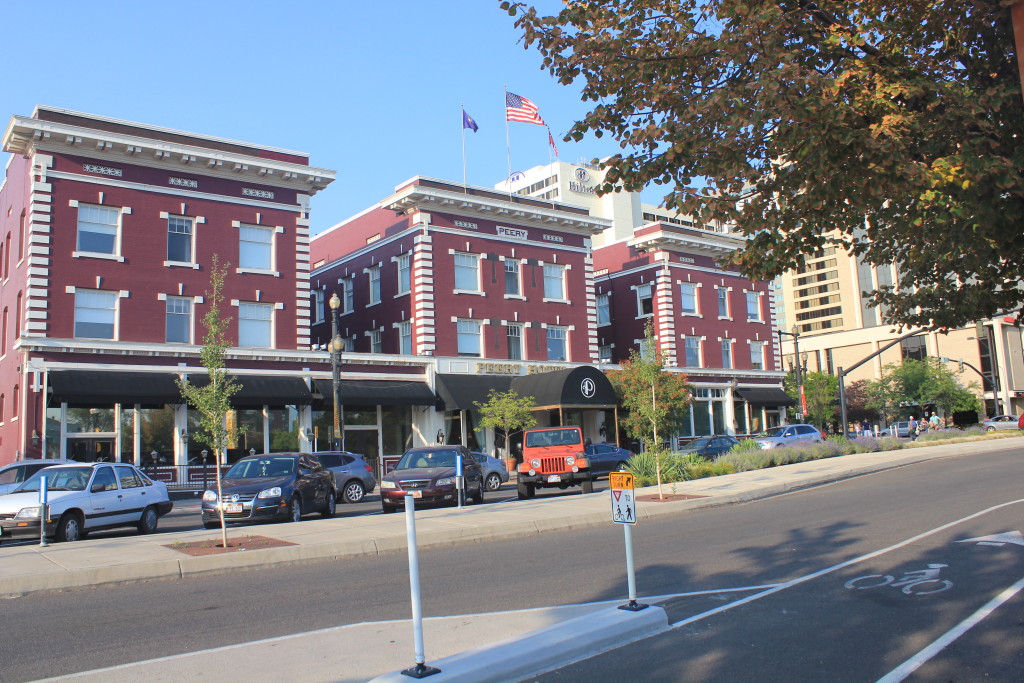 “What do we do if one isn’t available?” I’m even more afraid of this answer.

“Then we have to do a special order to California and that will take about 3 weeks.” He calmly responds, completely oblivious to the fact my heart has just been obliterated. 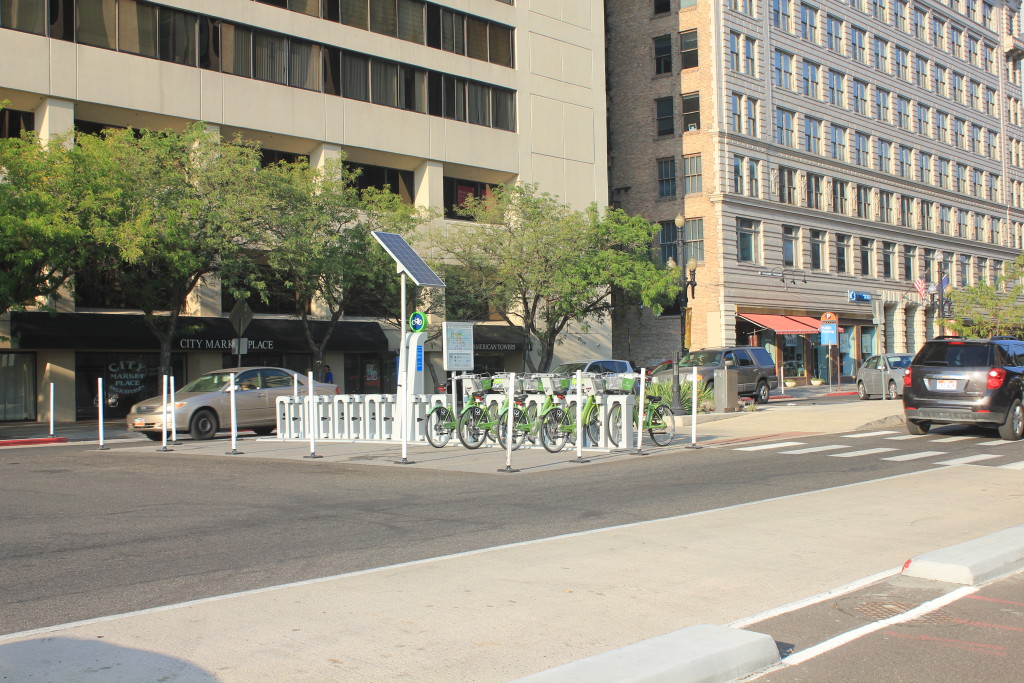 We’re supposed to be at the Albuquerque Balloon Festival on October 2. 3 weeks from Monday will be October 5, 3 days late already! Then we’ll need a day to get it on, and then 12 hours of driving. Even if we go right the way through (which we will!) we’re looking at being there on the 7th and it’s over on the 11th. This is the worst news possible. I call my mother and cry, but when I hear her starting to get stressed, I calm down and put things in perspective. This is part of living an alternative lifestyle. 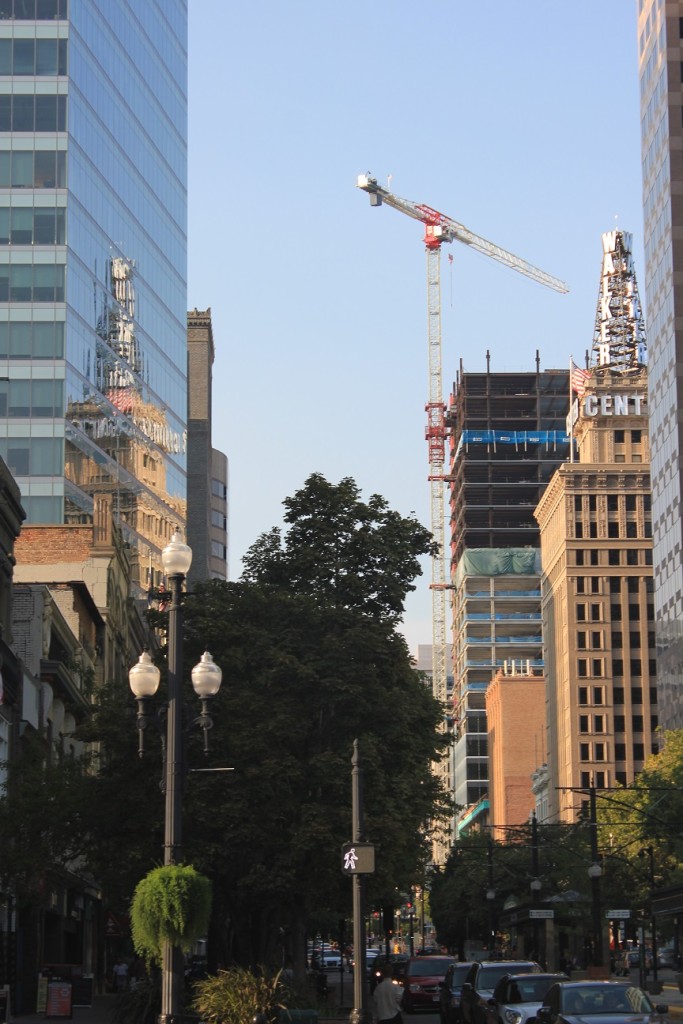 After my phone call, I discuss our options with Harold. We decide, we’ll wait to see what the parts guy tells us on Monday, but if it’s bad news, we’ll phone the manufacturer of our trailer to see if they can give us any better options. They are located up in Oregon, and we can drive there and back in a couple of days, if need be. They may also be able to ship quickly. That’s much better than waiting three weeks. 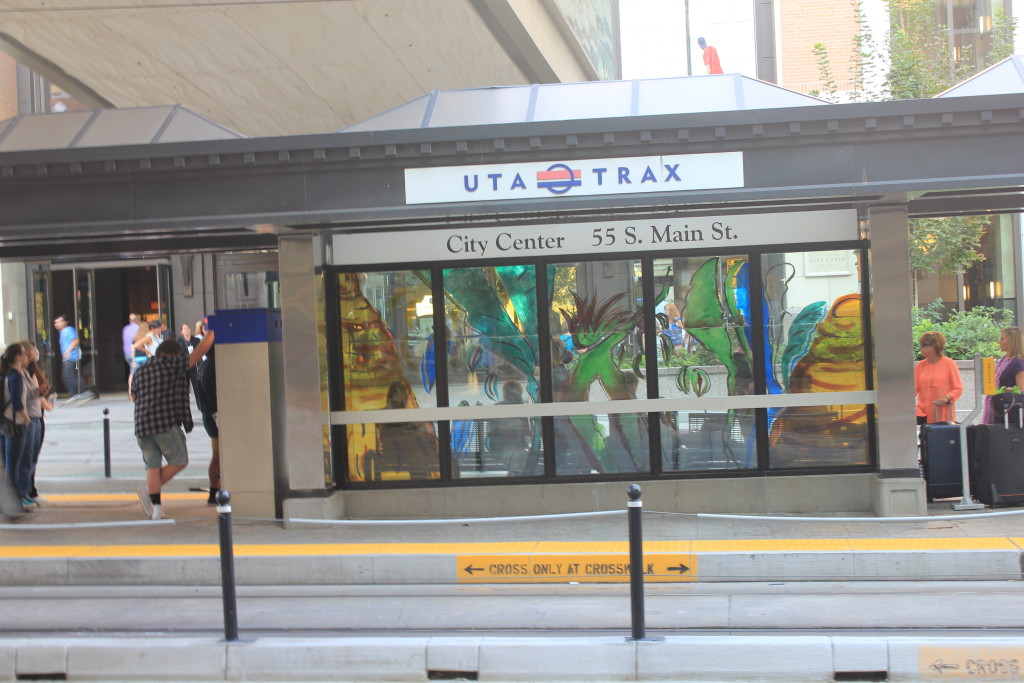 There was no point in driving back to the trailer, so we opted to walk around Salt Lake City for the rest of the afternoon. I hadn’t been here since I was 13, and Harold has never been here before. It’s a really nice, super clean, and pretty city. The downtown core doesn’t seem like a living city however. Our impression was that it appears to be a pilgrimage city. Everything is centred around the temple grounds. There don’t seem to be any apartments, just hotels and restaurants that cater to visitors and most people dressed like Mormons – dresses and skirts for women and a white shirt and tie for men. The only people we saw with dogs were us and the homeless people. 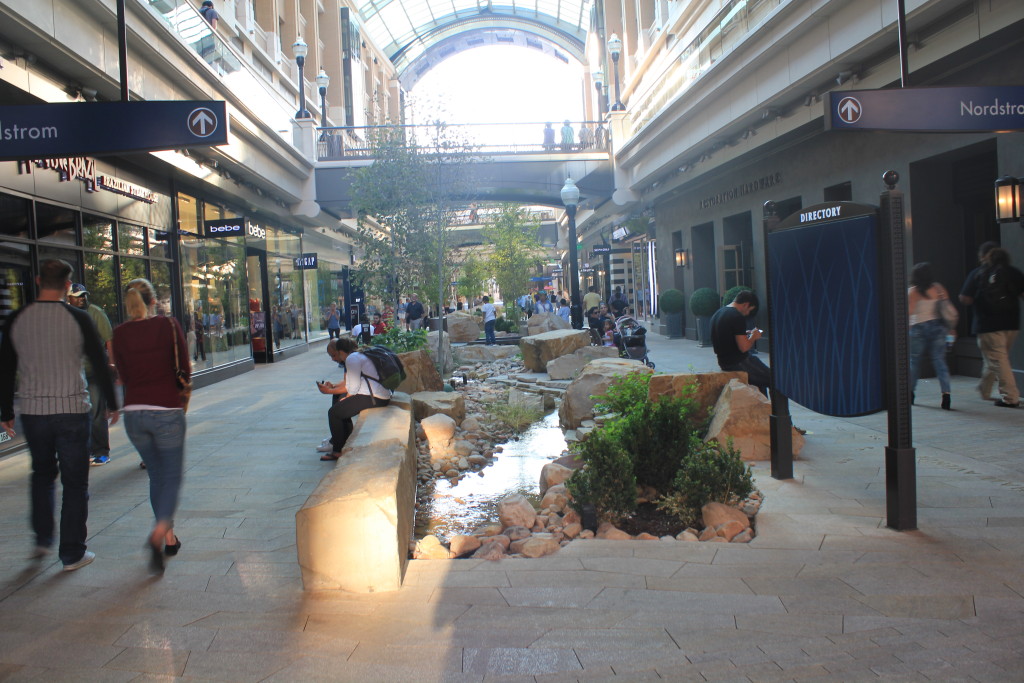 We saw more casually dressed people at the mall.

Once sunset hit, we figured it would be okay to leave the dogs in the truck and go have some dinner. I did a Yelp search and saw an Old Spaghetti Factory across town. It had been almost 20 years since either of us has been to one, so we decided to give it a try. It was located in an old brick industrial building that has been gentrified into shops and restaurants. The other two restaurants there were a Brazillian Steak House and a Brew Pub. The decor was pretty typically Spaghetti Factory-ish, which was great, but the food was blah – we both quickly realized why we hadn’t been back in almost 2 decades. It’s bland, kid food. C’est le vie. 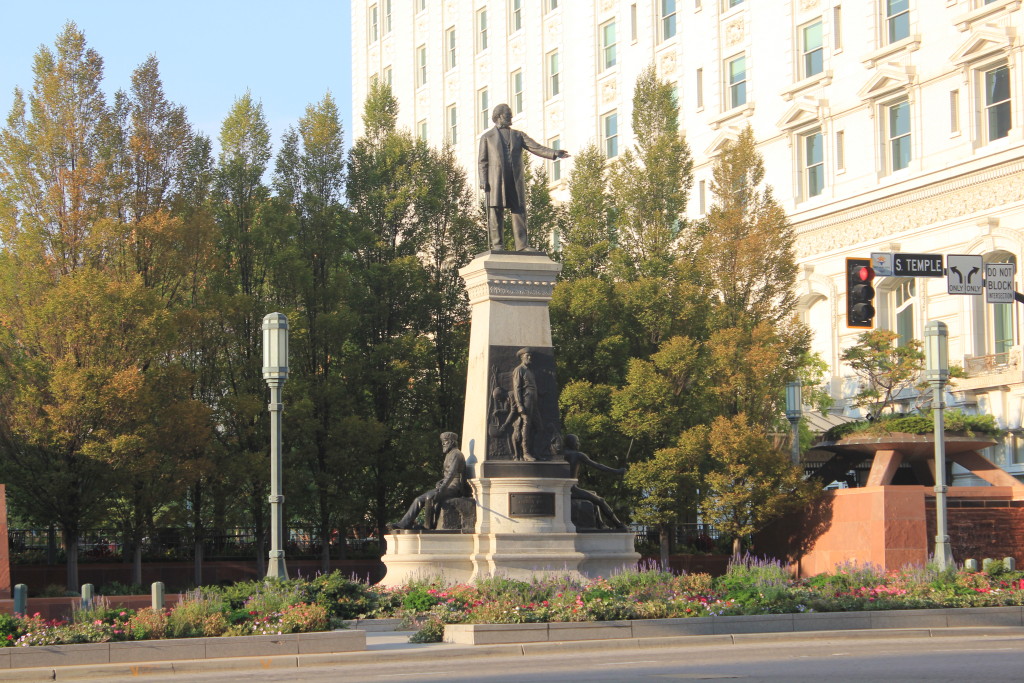 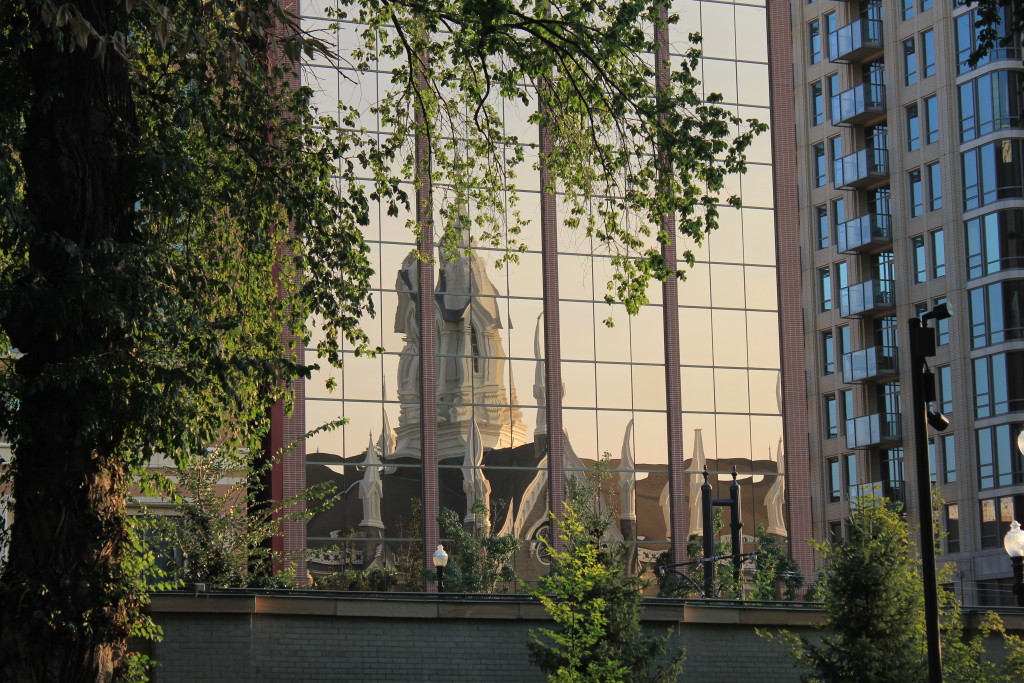 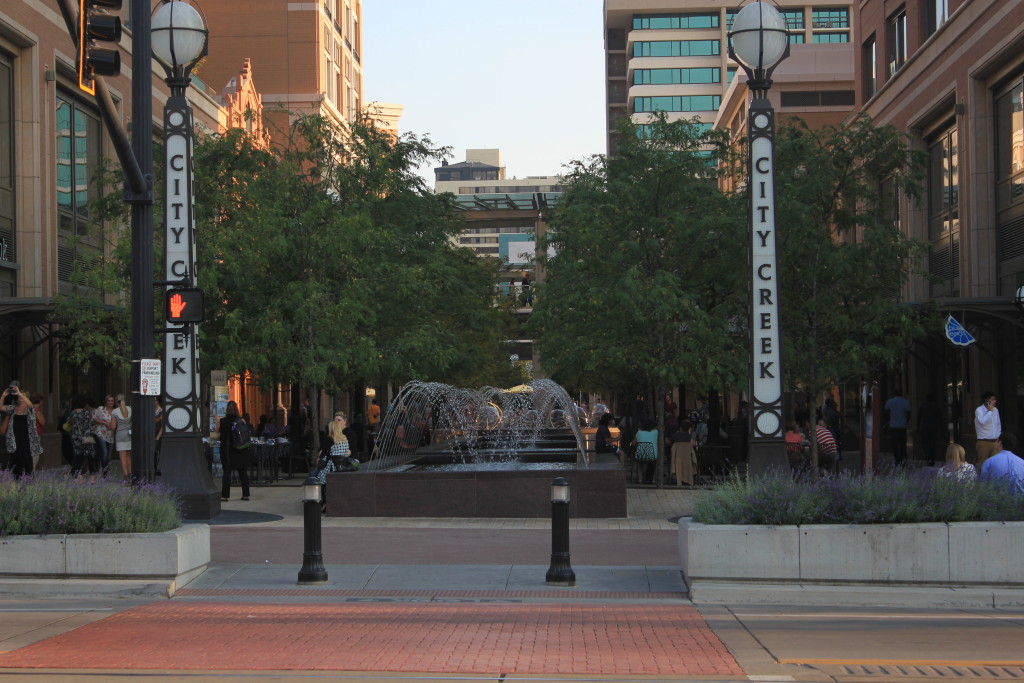 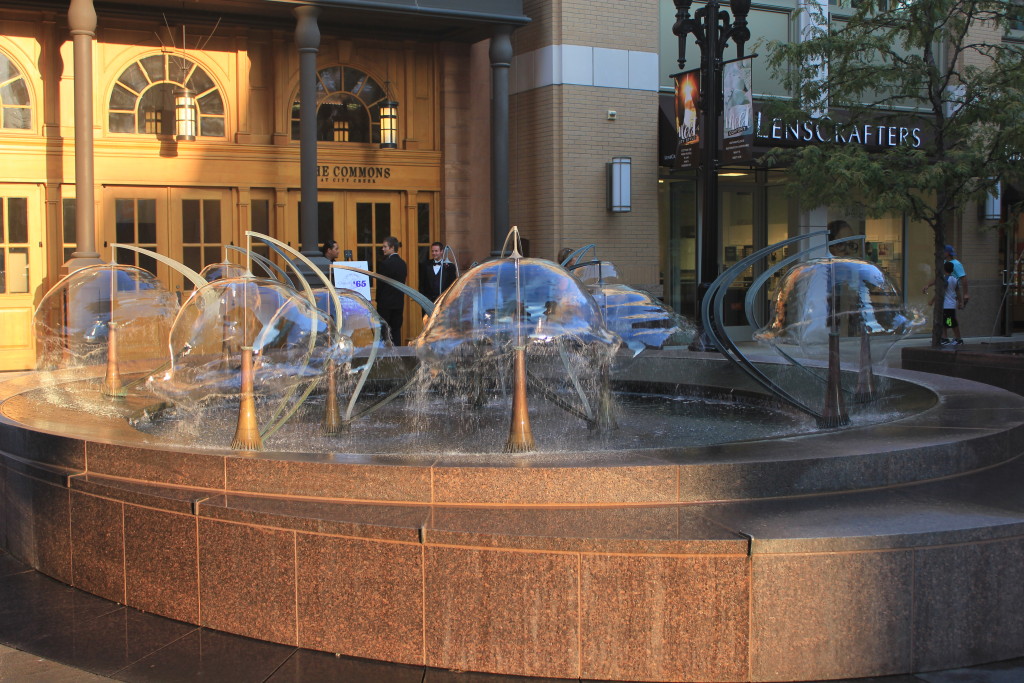 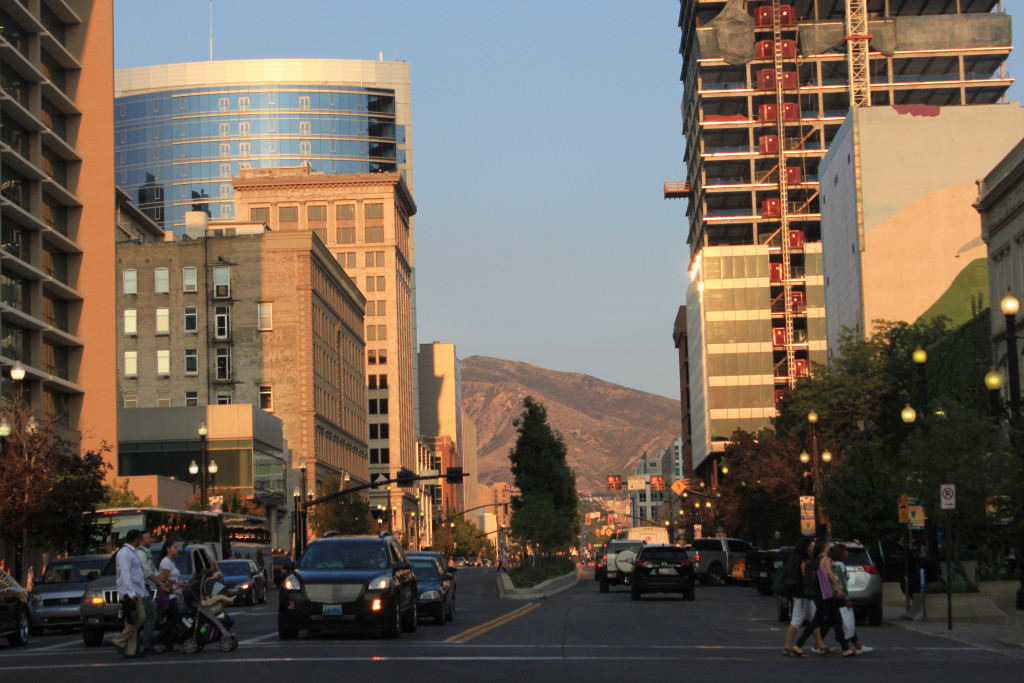 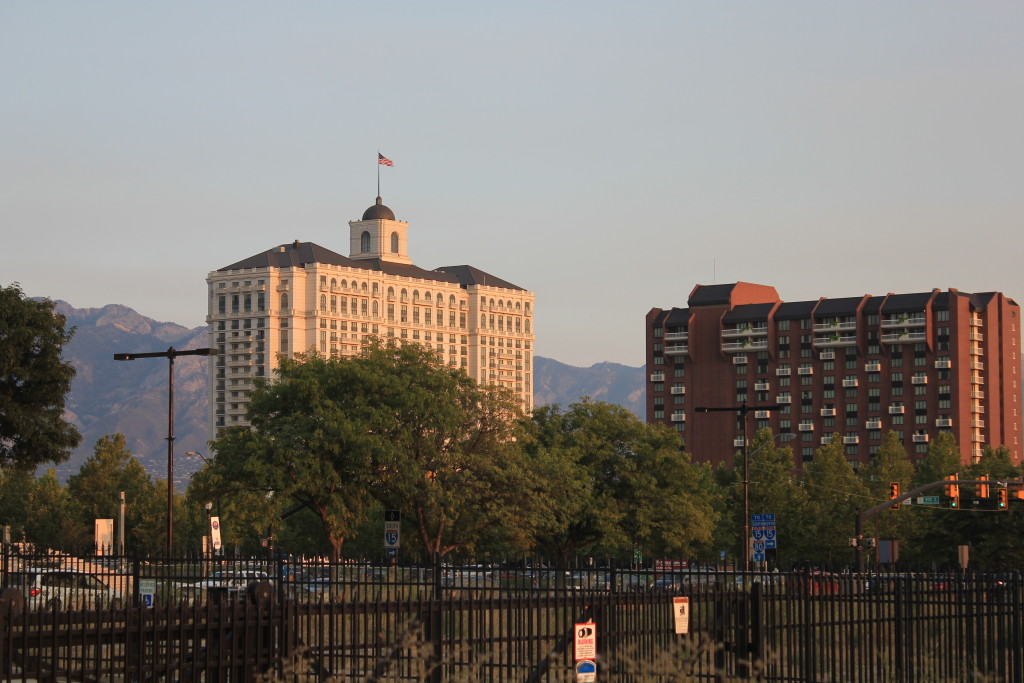 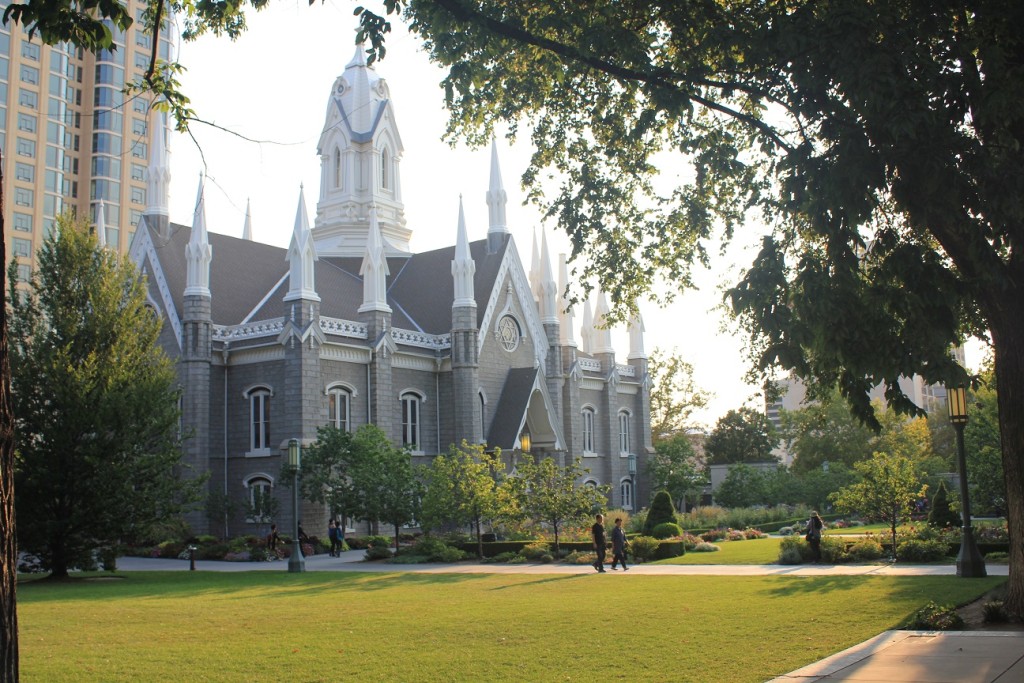 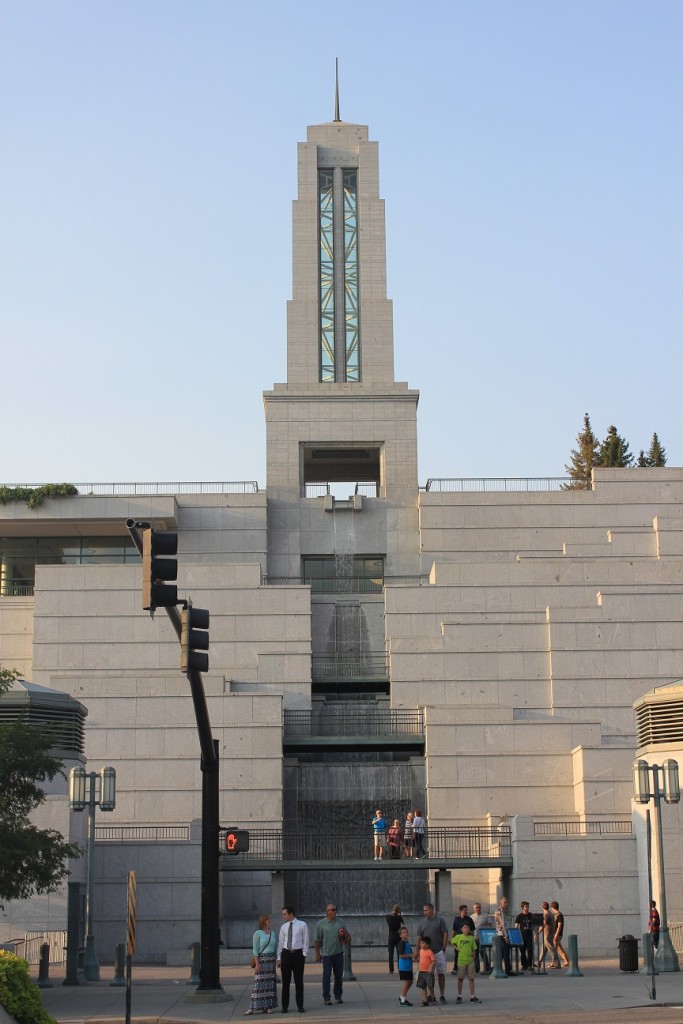 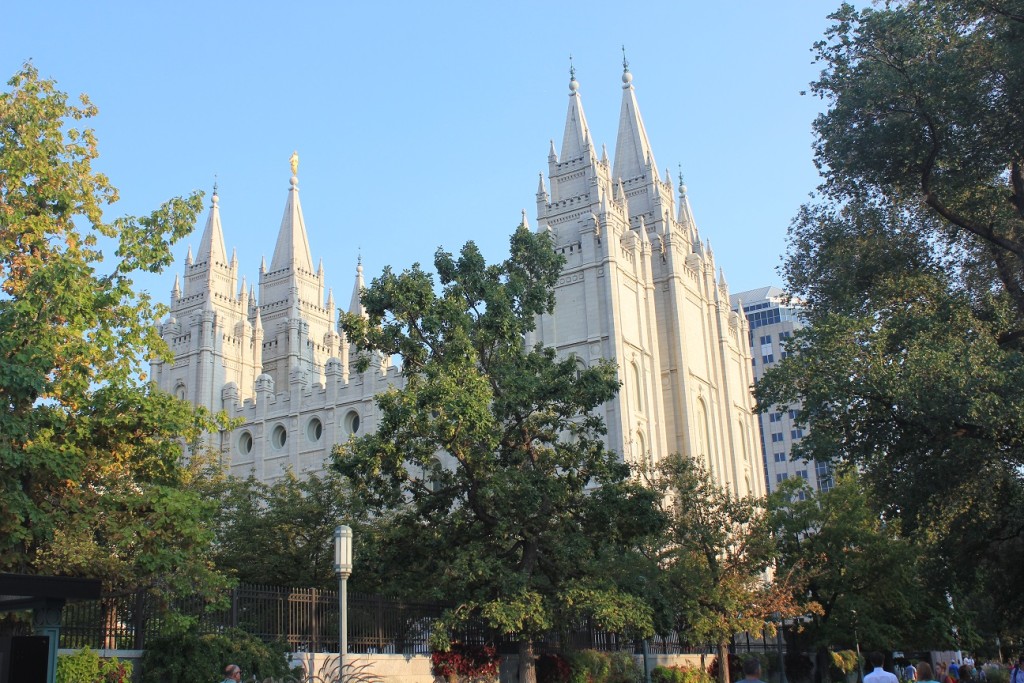 Wendover, NV – I’m Bill Murray and this is Groundhog Day