The Enchanted Circle Drive is an 83 mile circular route up through the Carson National Forest, north and east of Taos. The route takes you around Wheeler Peak, the highest point in the state at 13,161′ feet, up in the Sangre de Cristo Mountains. 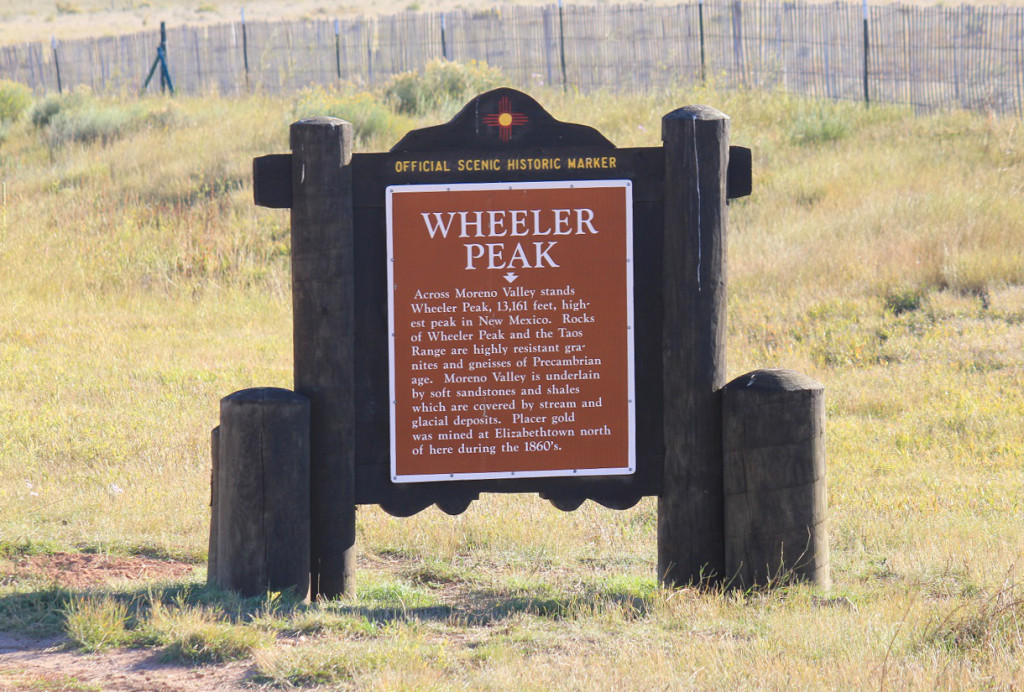 At the visitor centre, we had been told the better way to drive it was clockwise, so we were happy to go along with our theme for this trip and go left instead of right. We started from our campground, the very clean, calm, and well tended Taos Valley RV Park.

Questa – the first people in this area date back to 5000BC. The first Spanish visitor arrived to the area in 1540. More Spanish came in 1592, following the gold trail. They enslaved Natives to work as miners, eventually leading to a revolt in 1680, which pushed the Spanish out of New Mexico. The Spanish came back and wars continued between the two races. In 1800, the Spanish Militia secured the area enough so that a few settlements could grow. It was around this time that French trappers and the US military started coming through. The town was officially founded in 1842 and the early 1900’s saw the development of the molybdenum mine, now owned by Chevron.

The area is very beautiful, and the leaves were already starting to turn to fall colours when we went through. There are trails from here that go down into the Rio Grande Gorge, along the meadows, streams, and forests of Columbine Canyon, or up into the mountains at Rio Costilla Park. There are all sorts of outdoor activities available here including camping, rockclimbing, cycling, mountain biking and horseback excursions.

Internet data access in this area was problematic. I couldn’t get roaming access anywhere. That makes it a no-go for camping, for us, unfortunately. 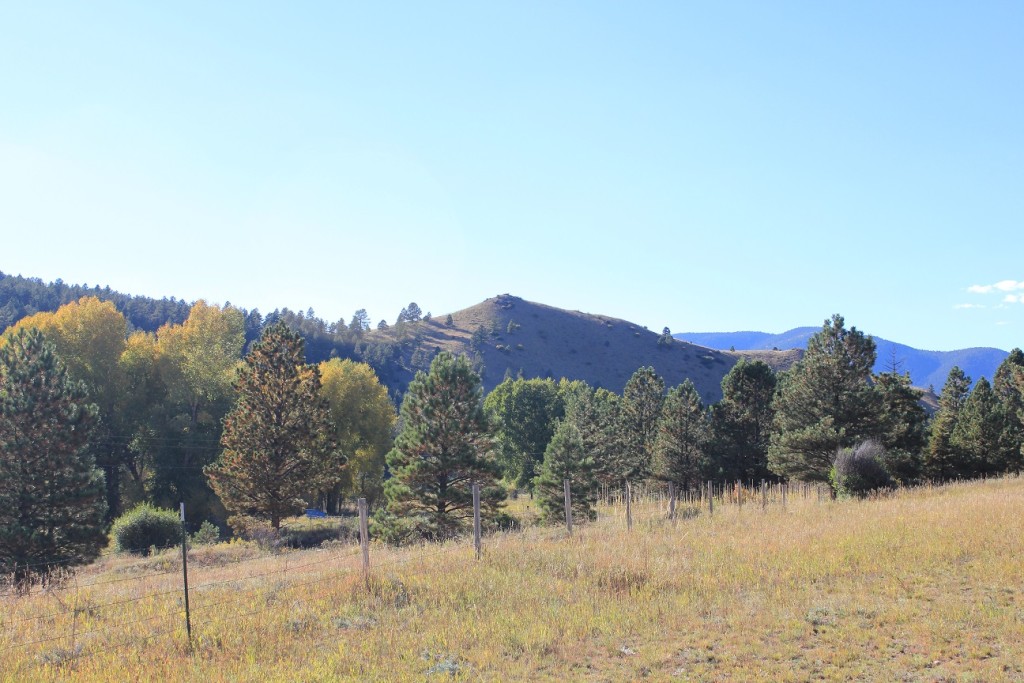 Red River, originally named River City, was discovered by explorers, fur trappers, and prospectors and when gold, silver, and copper were found in the mountain, many more came to find their riches. The town boomed with many businesses: shops, saloons, hotels, boarding houses, and a red light district. Eventually, the mines ran out, and the area changed into a mountain retreat vacation area.

Definitely, the most touristy destination on the drive, the road runs down the length of the town, with shops, and restaurants running from one end to the other. In the winter, there is downhill and cross country skiing, snowboarding, snow-shoeing, and snowmobiling. The rest of the year, there is hiking, mountain biking, rafting, and horseback riding.

I had the same problems with internet data access here. I wish I’d brought my Verizon jetpack to test it. I only had my phone which I have a roaming package for. I could not get any data signal at all. 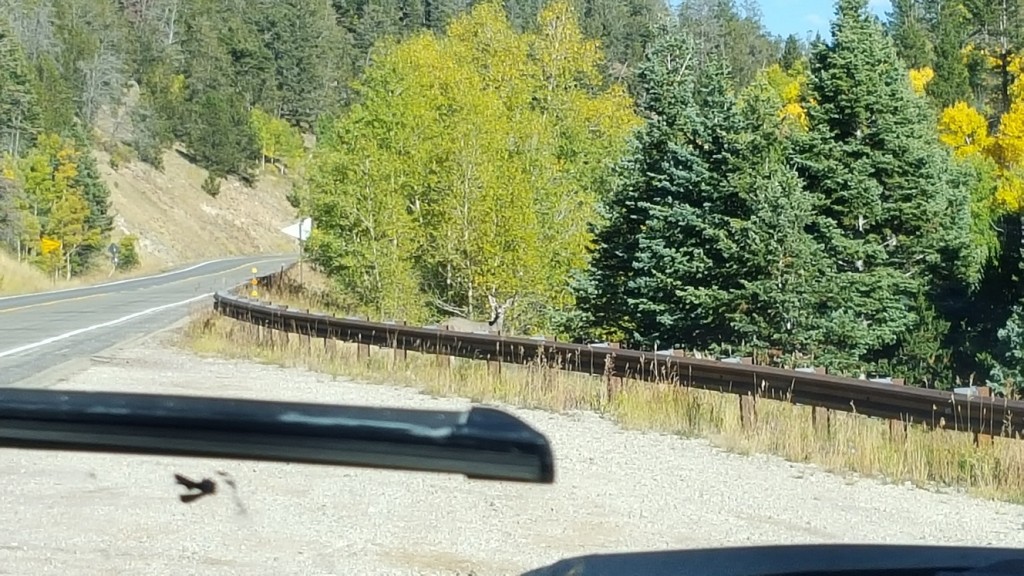 Here’s the photo I took of the deer …

After we drove up the hill out of town we chanced upon two deer on the side of the road. Unfortunately, they started running off as soon as they saw us and the perfect photo opp was lost. 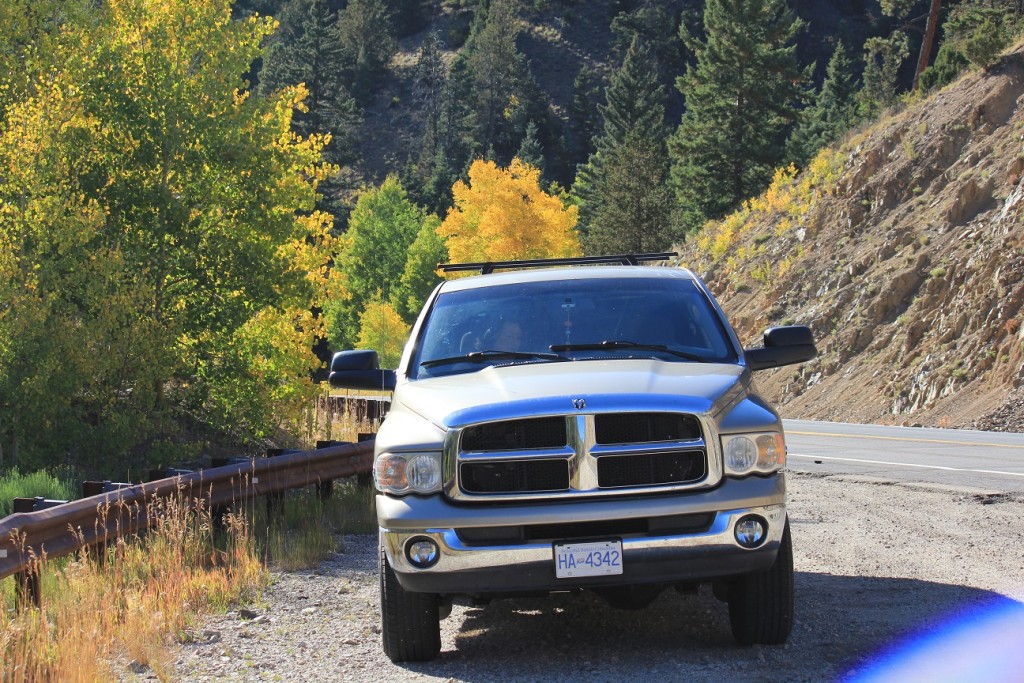 And here is the photo the deer took of me!

Elizabethtown, (nicknamed “E-Town”) New Mexico’s first incorporated town began in 1866 when the first gold mines were found. The town grew to it’s peak in 1870, with a 7000+ population but quickly dwindled by 1872, to about 100 when the mines ran out. The population came back up a bit in the 1890s when the railroad passed through, but by 1917 the town was pretty much dead.

Today, E-Town is a ghost town. There is a museum in a former schoolteacher’s home, with memorabilia from the boom time of the town, a General Store selling souvenirs and mementos from that era, and a cemetery with old spooky grave markers.

Internet was as live as the town – in other words, not a bit of signal. No signs of life here, in more than one way. 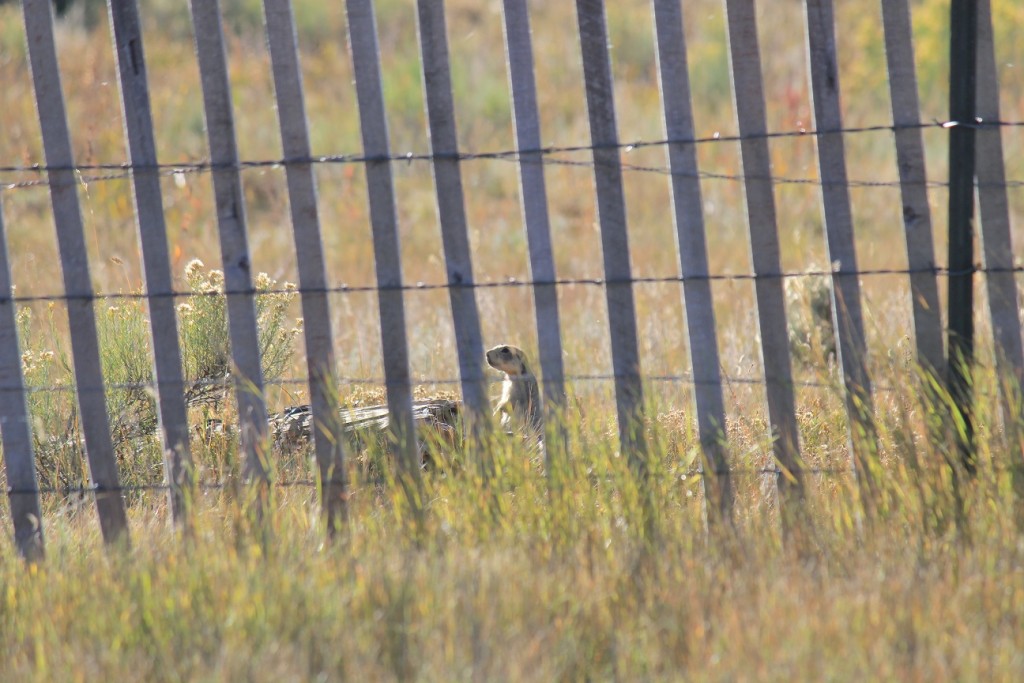 Eagle Nest – The dam that created Eagle Nest Lake was completed in 1918. Originally proposed for irrigation, it became a fishing and vacation area instead. In 1919, the town of Therma was developed and residents from Elizabethtown moved down here. Tourists flocked up here in the summer from hotter areas and gambling pursuits took over the town. The town was renamed to Eagle Nest in the 1930s when mail kept arriving addressed to Eagle Nest Lake instead of Therma.

In the 1940s the police started cracking down on illegal gambling, and it all went underground, or hidden away in the back rooms. In 1976, the town was finally incorporated. 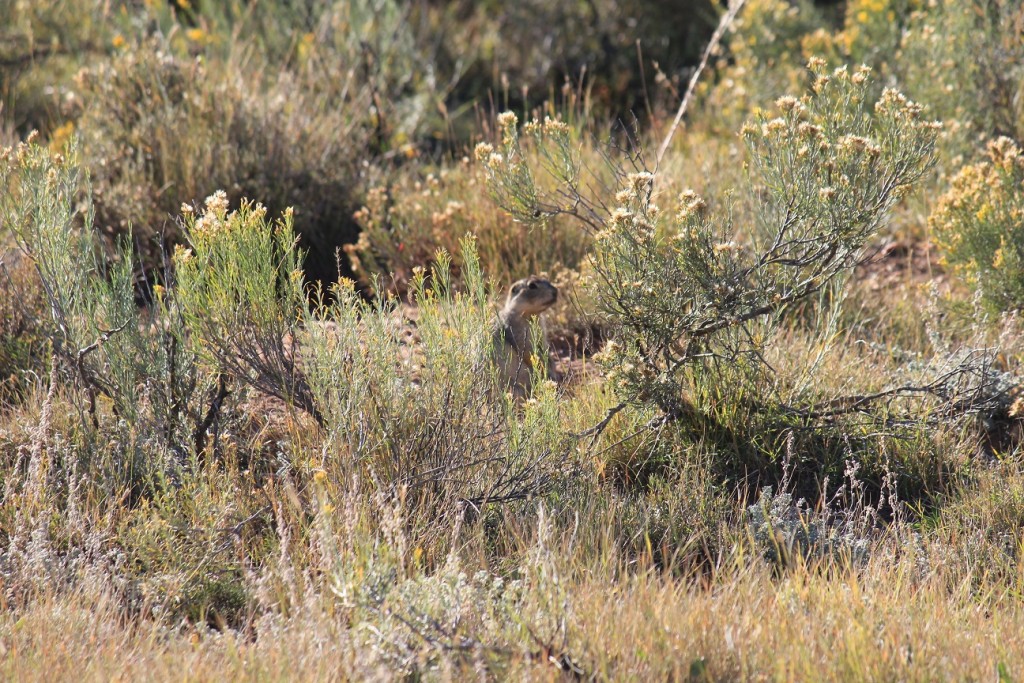 Today the town is a small summer-home and resort area.  At 8,382 feet elevation, they enjoy cool, dry summers and moderate winters. There is a beautiful, sloping view of the lake from all around, and we were excited to see hundreds of prairie dogs scampering in and out of their holes and standing in upright poses along the road.

I still couldn’t get any internet at all here. 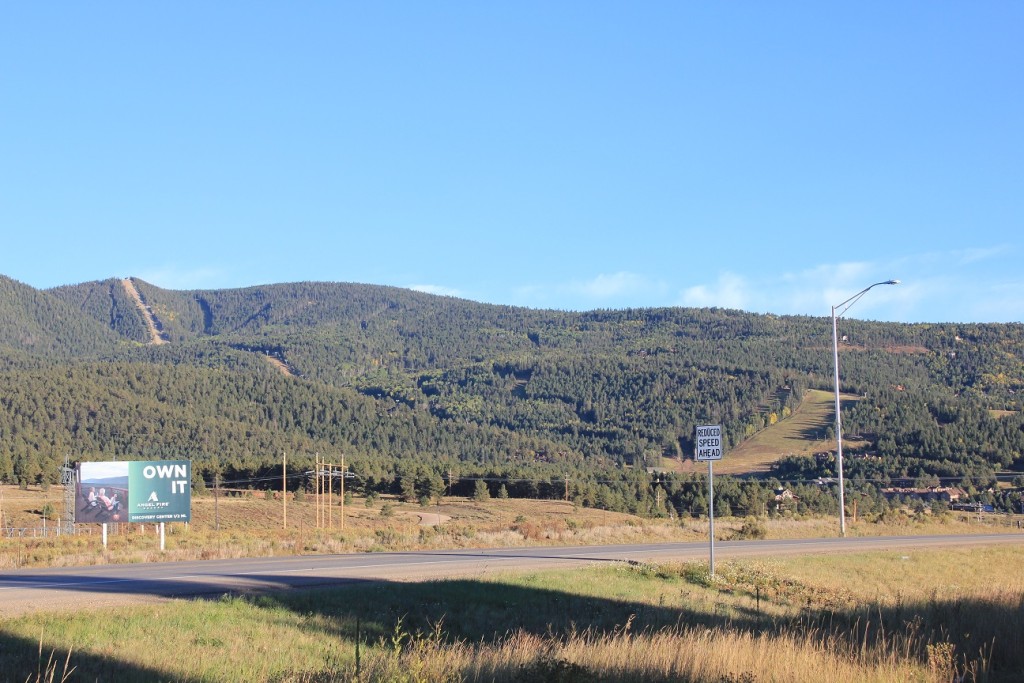 Angel Fire – One Fall in the 1780s, some Ute braves were out hunting and saw the sky to the north over the Agua Fria peak, awash in an orange and red glow. They called it “Fire of the gods”. Franciscan Friars eventually renamed it to “The place of the fire of the angels”. It was thought to be caused by sunlight on the frosty branched trees up above. I’m not sure when it changed to just Angel Fire but the town wasn’t established until 1967 and incorporated in 1986.

This was my least favourite town on the drive. I expect it is much nicer during the winter, but it appeared to be a sprawling ranchland with box like buildings. It’s down on the valley floor, but still at an elevation of 8,420 feet.

YAY! I finally got internet, but it was spotty. My daughter was able to phone me when we were in town and I was able to surf a bit on Facebook.

We arrived back in town at sunset and drove down the main street looking for a place to have dinner. After passing up a few others, we settled on El Taoseno, a place that was very Mexican looking on the outside but more like a diner on the inside. I was a little disappointed by the interior and worried we’d not be happy with our dinner, but I was so wrong.

I had enchiladas with vegetarian red chile sauce, and Harold had a combination that came with a green chile relleno, a taco, and an Enchilada. He chose the spicier, non-veg chile sauce (typically the chile sauces have pork in them). The food was super tasty. It wasn’t on the same scale as the Ranchos Plaza Grill, but it was still very good. The sopaipillas that followed were different, more cakey than those from two nights before. I’d rate them as “Very good!” in contrast to the other night’s “Excellent!”