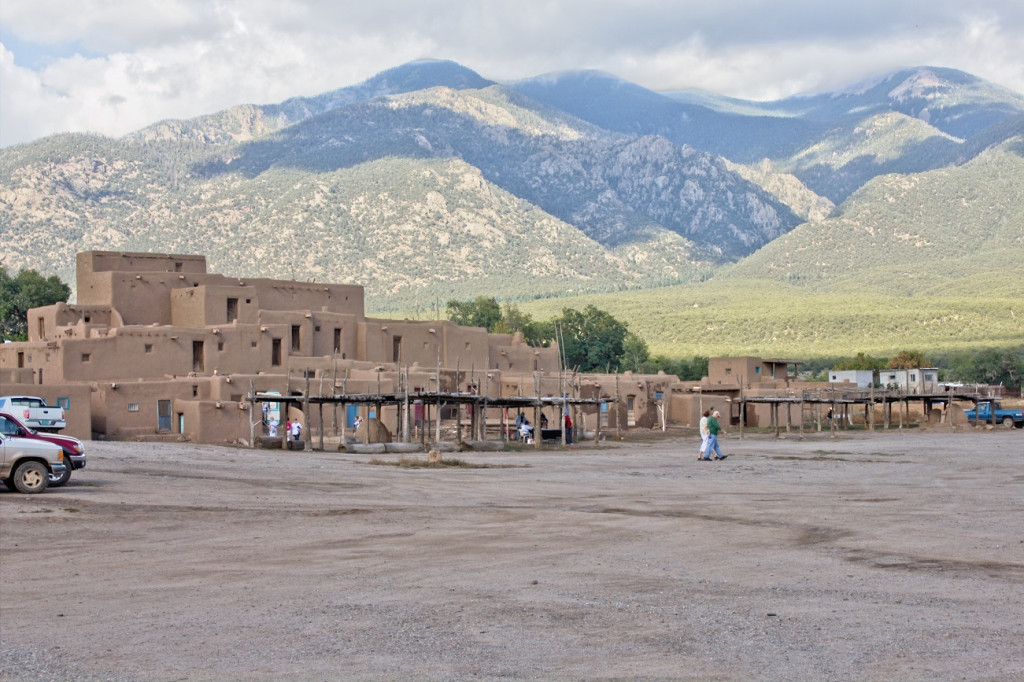 Taos Pueblo is a Unesco World Heritage site located 3 miles northeast of the old town. Established in the late 13th and early 14th centuries, the pueblos are considered to be one of the oldest continuously inhabited communities in the United States. 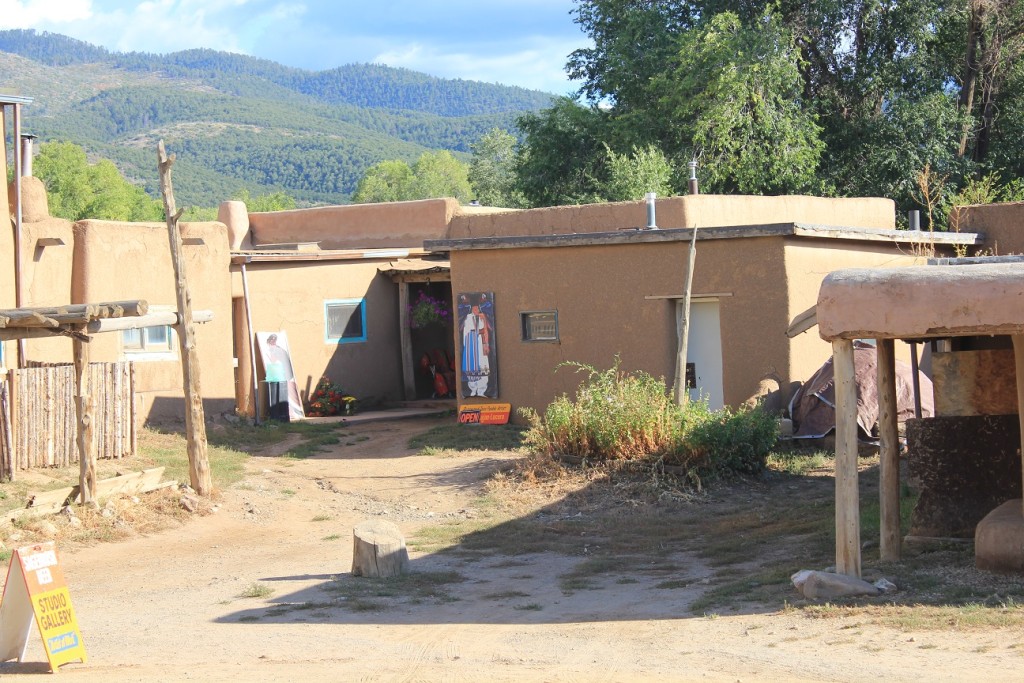 It was a beautiful sunny, warm, breezy day when we drove out there. The tall grasses and wild flowers lining the road undulated softly in the wind, aglow from the afternoon sun.

Parking was free, but there was an entrance fee of $16. I have read that, like some of the other pueblos, they used to charge a camera fee, but that is no longer in effect. Perhaps they conglomerated it into a higher entrance fee? I have no idea. Their web site makes it sound like professional photographers and artists must pay a fee. 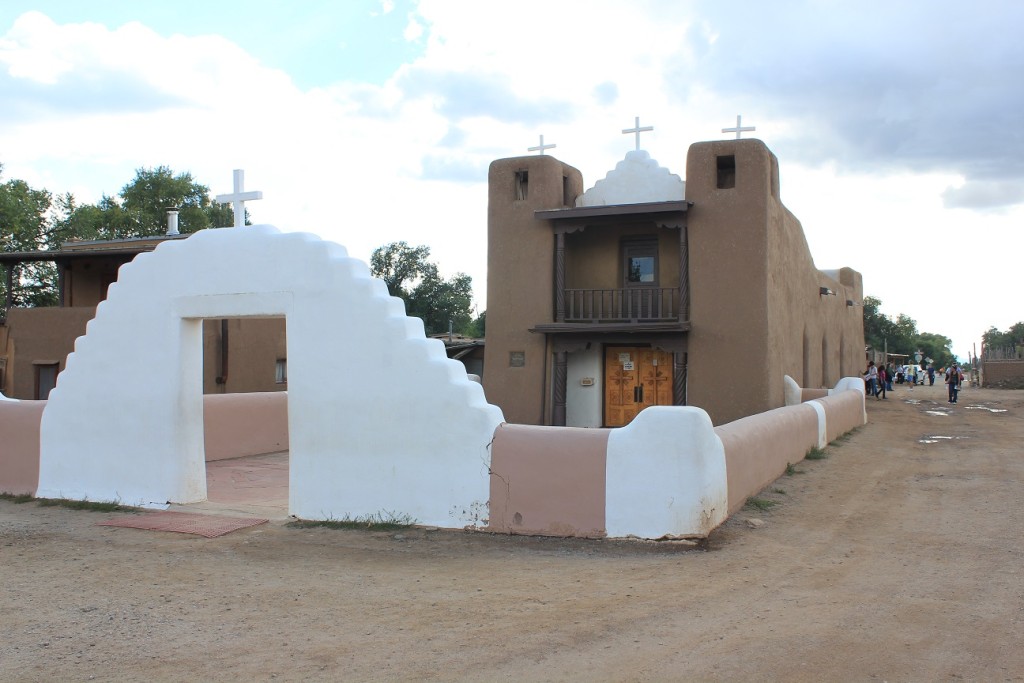 There are guided tours all day from 9am-4pm that start from the San Geronimo Chapel. The young man who lead us around the pueblo was in his early 20’s and had grown up here. He was a nice looking young man, with golden brown skin, and a big smile. He informed us before the tour started that the guides are not paid and work for tips. 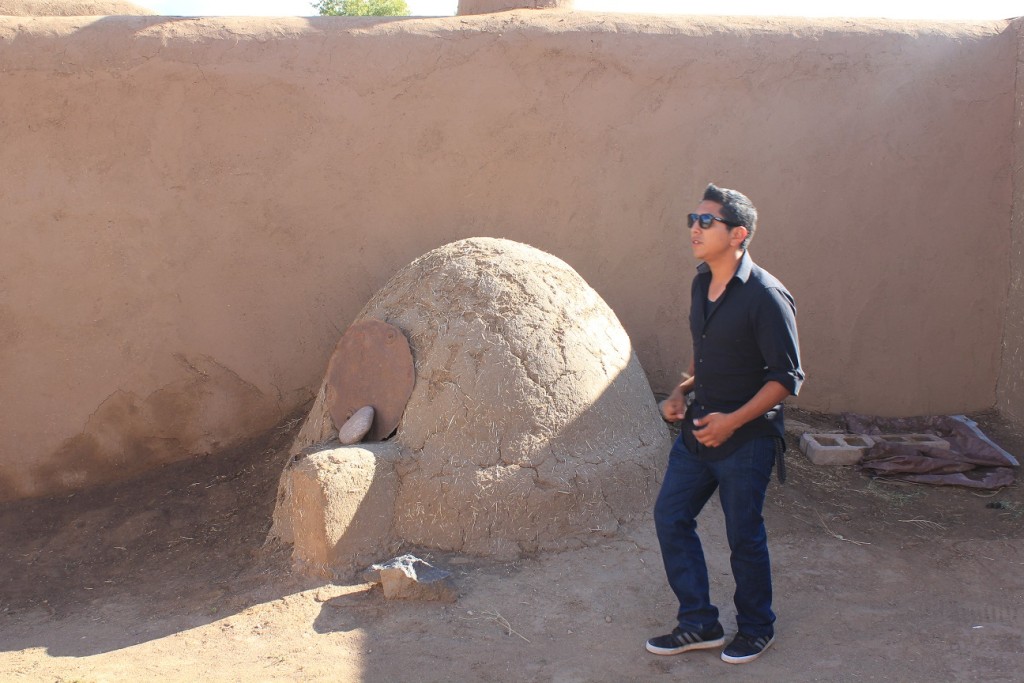 He told us when the youth are teenagers they have the choice of going to a special high school in Santa Fe or going to the local town high school in Taos. He had started in Santa Fe, but found it too restrictive. After a life of being able to roam where he wanted, he couldn’t stand that they were only allowed off the school property one day per week. So he came back to Taos, and finished high school in town. 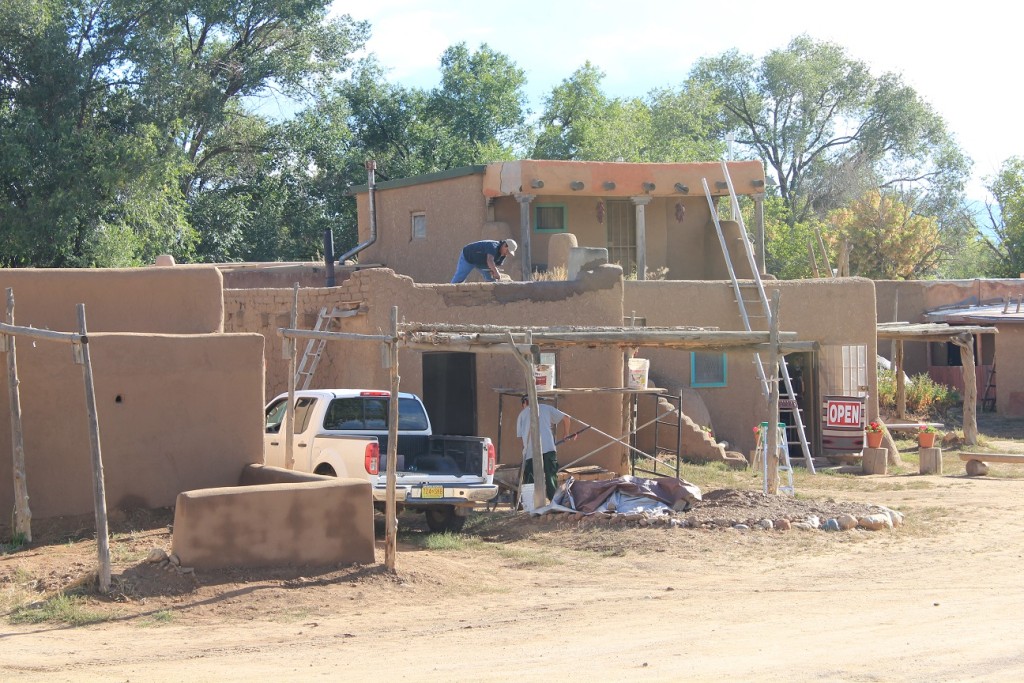 The pueblo is a thriving city where many families still live. We could see men working hard on the walls of the dwellings and were told this was due to the San Geronimo Feast Day coming up at the end of the month. 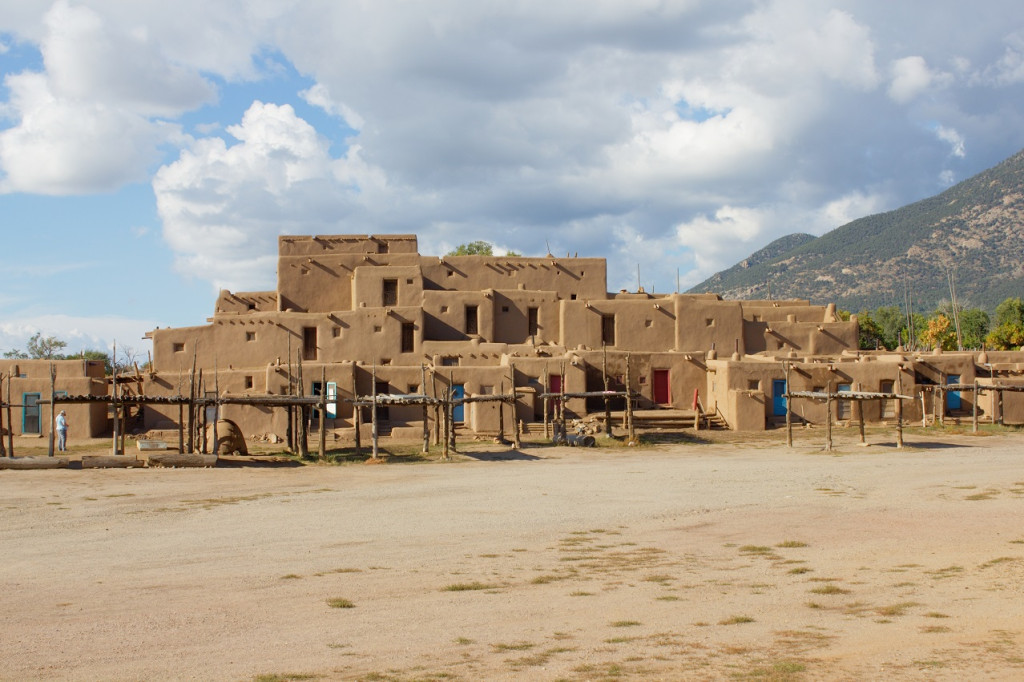 Most of the homes are only one or two stories, with a larger, multi-storied, multi-family building in the centre of the village. This complex was built with no doors on the bottom. The only way in was to climb up the ladders and enter from above. This was a form of security. During attacks, they could pull up the ladders and protect themselves from the invaders. 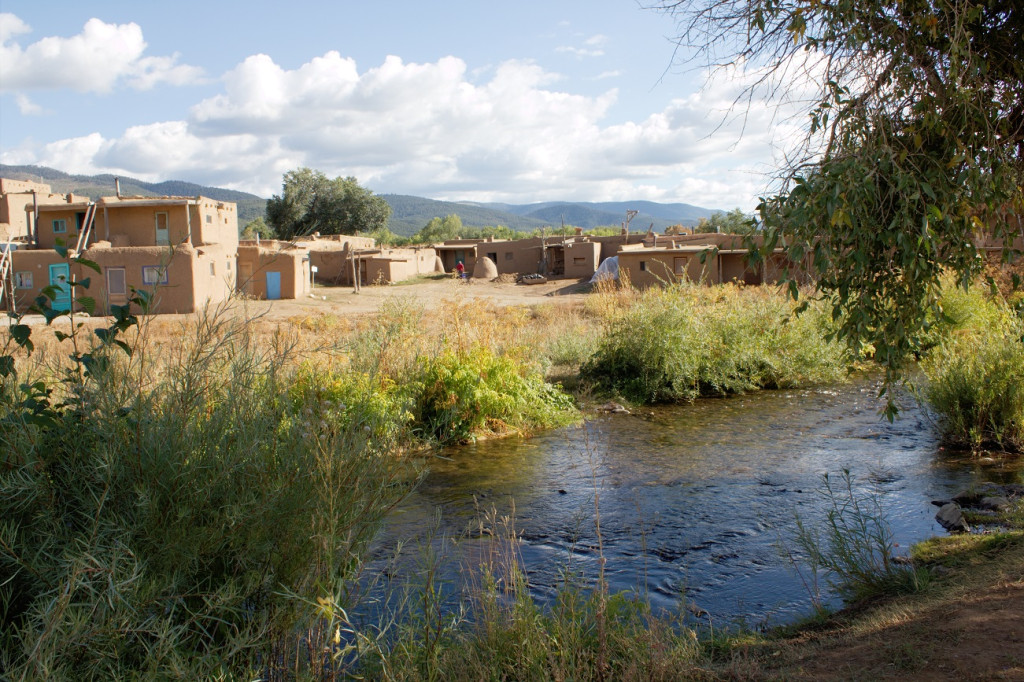 The pueblo is built on both sides of Red Willow Creek, also called Rio Pueblo de Taos, or shortened to Rio Pueblo. This is a small stream that flows down from the Taos Mountains that sit behind the encampment. There are signs that ask people to stay out of the stream since it is the pueblo’s water source, so it surprised and aggravated me to see a couple of visiting kids playing in it, while their parents stood nearby. 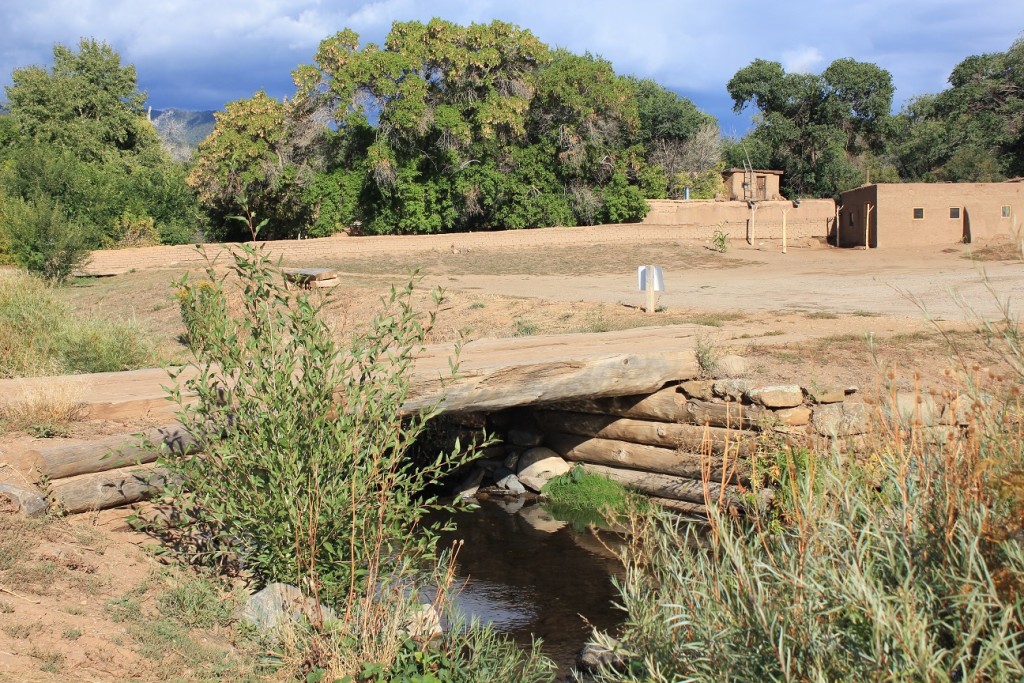 The language spoken here is Northern Tiwa, a dialect of 2-3 related Tanoan languages that are spoken in New Mexico, Kansas, Oklahoma, and Texas. Taos pueblo is known for being one of the most private, secretive, and conservative pueblos. As a result, the language is in danger of being forgotten, with it only being known by those over 40. 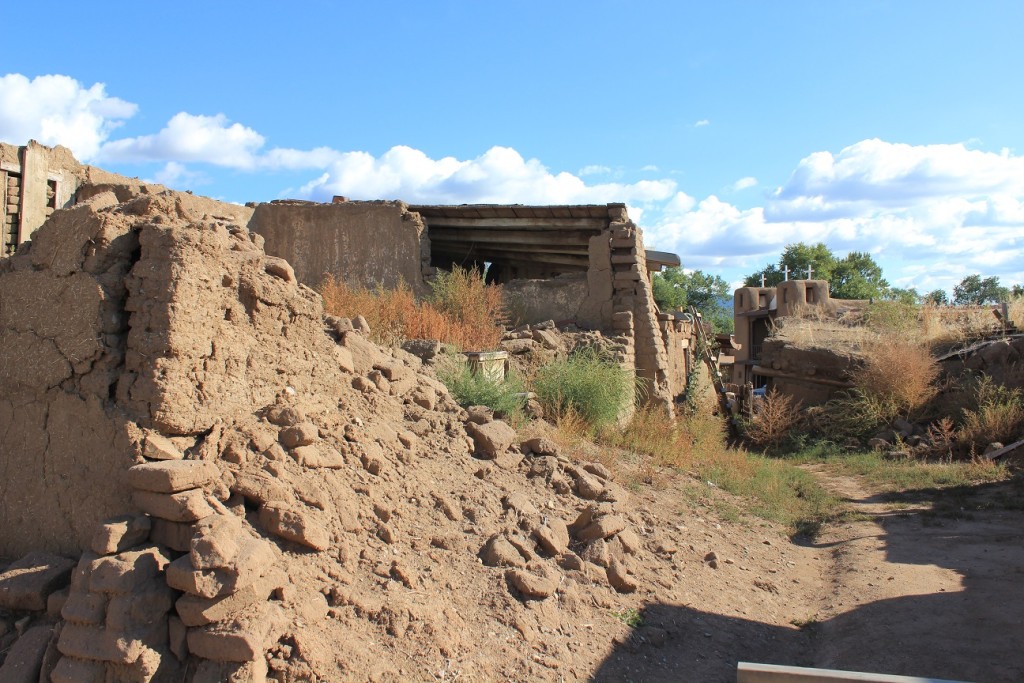 Our tour guide told us he was not allowed to tell us about their private ceremonies. They practice both Roman Catholicism and their own traditional religion. There is an old cemetery out back but it contains only gravestones for the Spanish who once lived out here.

He told us the tale of how Governor Bent was killed and the reprisals against the pueblo. Governor Bent was a hated man, by New Mexicans and the Taos Pueblo, who wanted the Americans to be gone from Taos. They revolted against his rule, and scalped the Governor in front of his family. In retaliation, the US military attacked the Pueblo. 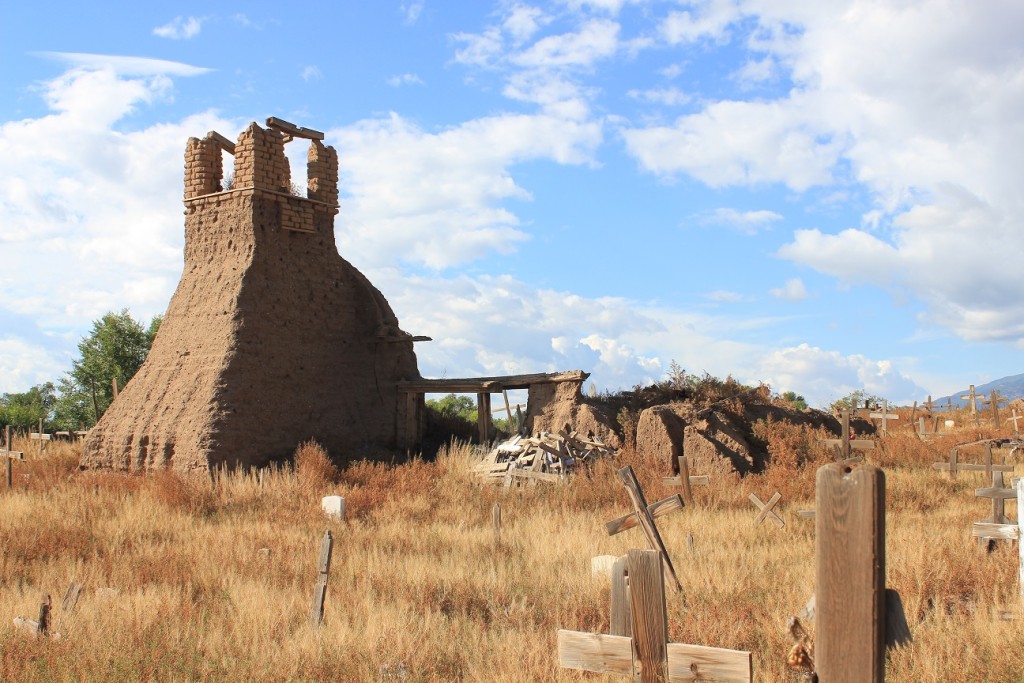 By American accounts, they killed 150 rebels inside the village. By Taos Pueblo accounts, the rebels fled to the hills with their families. The old and infirm had to be left behind, so they all crowded into the Roman Catholic church, thinking this would give them sanctuary. Unfortunately, the US military shelled the church, killing them all. The original bell still hangs in the bell tower. 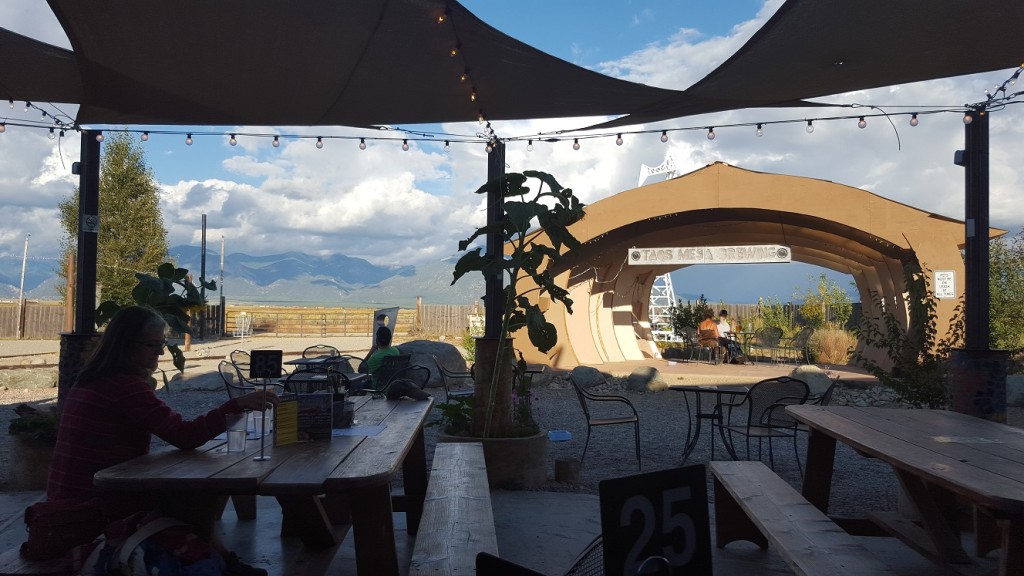 After the pueblo visit, we drove out northwest of Taos towards the Rio Grande Gorge, but got sidelined by a stop in at Taos Mesa Brewing. They have a great yard out back overlooking the Sangre De Cristo Mountains with an amphitheatre for large shows, and a smaller stage by the patio. Inside is yet another stage for indoor events. 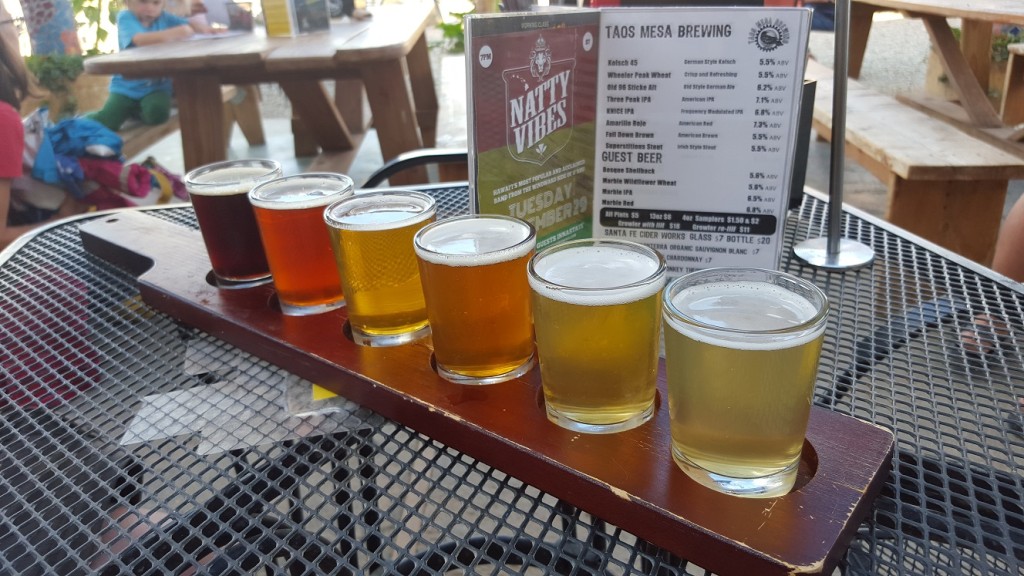 We got a sampler of six of their beers with some chips and really good salsa. The darker beers were too hoppy for us, but we enjoyed the lighter beers a lot. Up north we usually prefer ambers and browns, but down here, we’re enjoying the lights to medium coloured lagers. 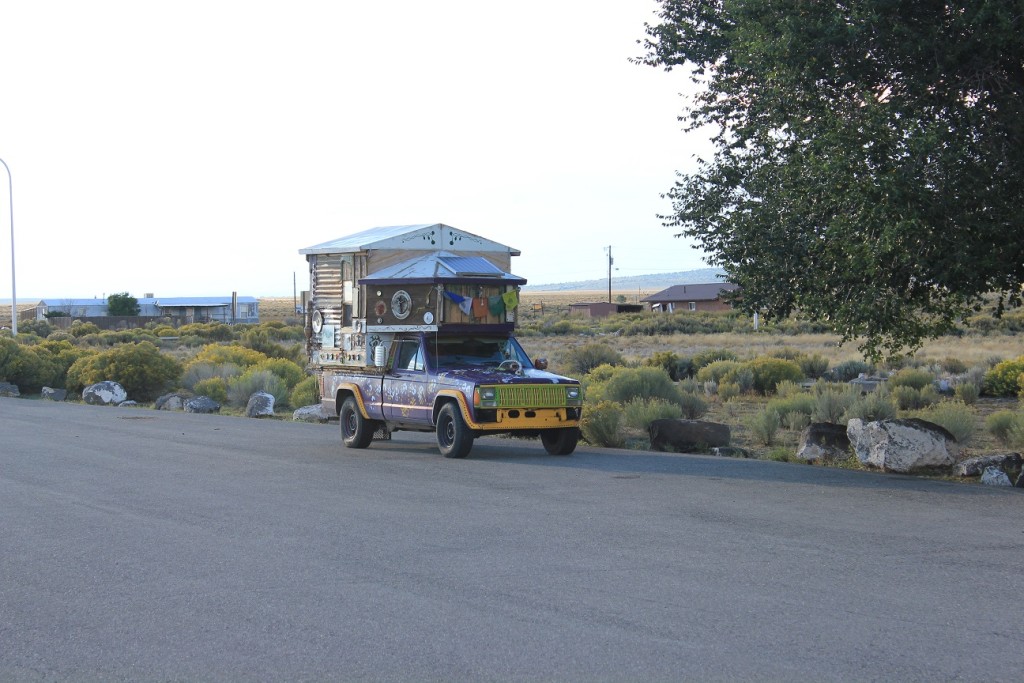 We met a group of cyclists from California on our way out, and we wished we’d set aside some more time to cycle out through the countryside. We’ll make sure to do that next time through. We’re still moving way too fast. We’ll never have time for all the hiking and cycling we’d like to do, if we keep moving along at this pace. Unfortunately our breakdown time interfered and we have to rush along a little faster to make it to the Albuquerque Balloon Fiesta on time. 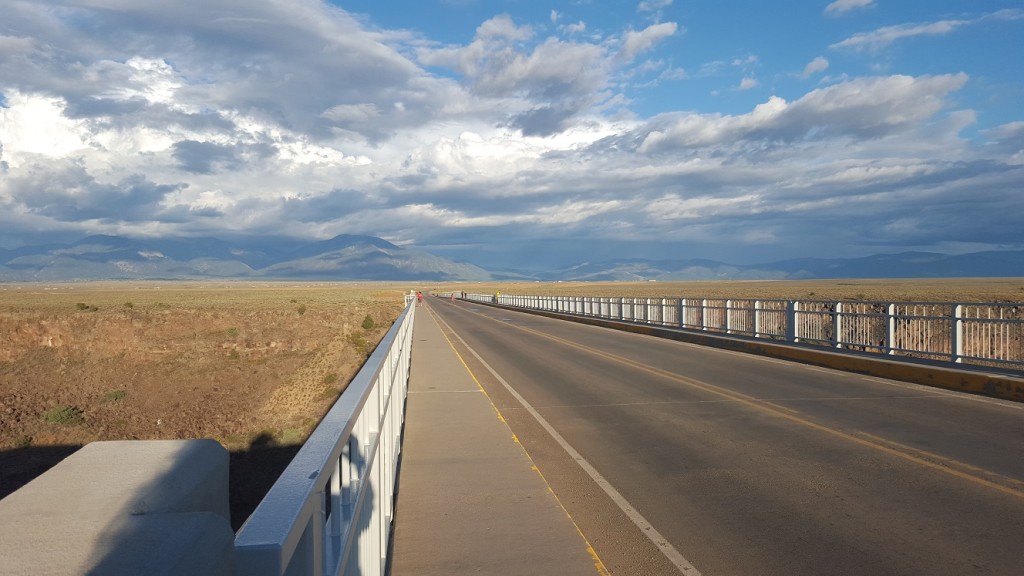 The gorge and bridge across it is an amazing sight. It goes down and down and down so far, it’s difficult to gauge it. I acquired a fear of heights after my daughter was born and I have a difficult time turning it off when it’s this high. The fear grips me in a very inner part of me. I feel everything clench up and scream at me to get away. We walked out along the cavern walls first and that was bad enough. Then we went out to the bridge. 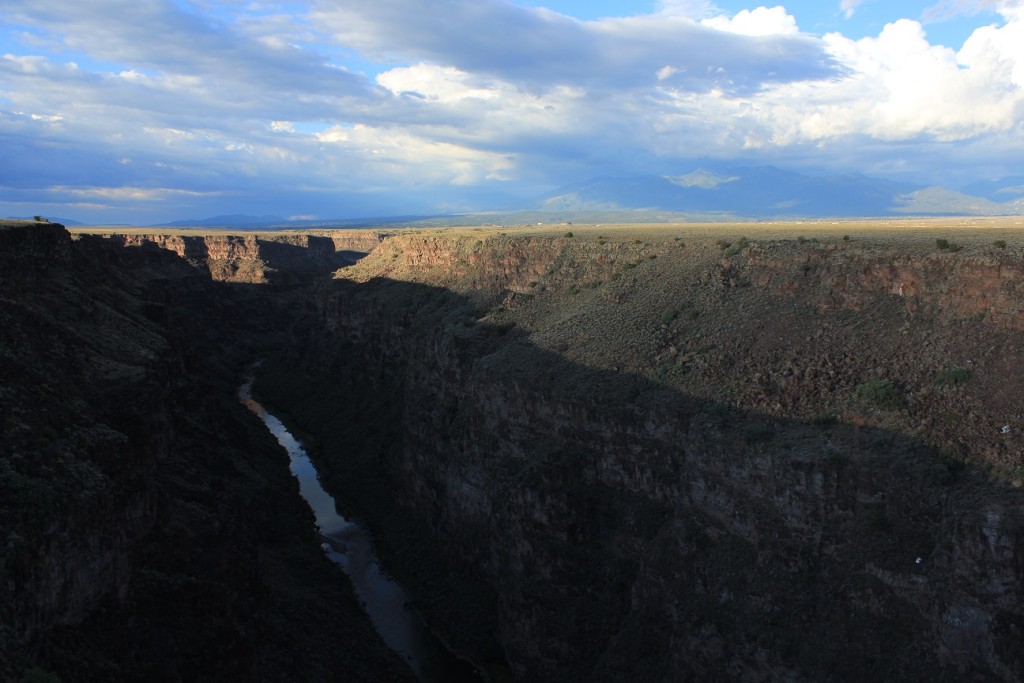 As we walked up to the edge of it, we met a man walking back. He’d left his wife to continue walking out there. He’d got a quarter of the way in, and just couldn’t make himself go any further. I figured I’d do better than that, and took a couple of steps onto the bridge, but looking down at my feet, I could see the sidewalk separated by space from the bridge and it was soooooo far down. My imagination went crazy, showing me scenes from my nightmares, falling, and falling, and falling, screaming over and over, just knowing it will never get better again, and then kersplash – I’m dead. 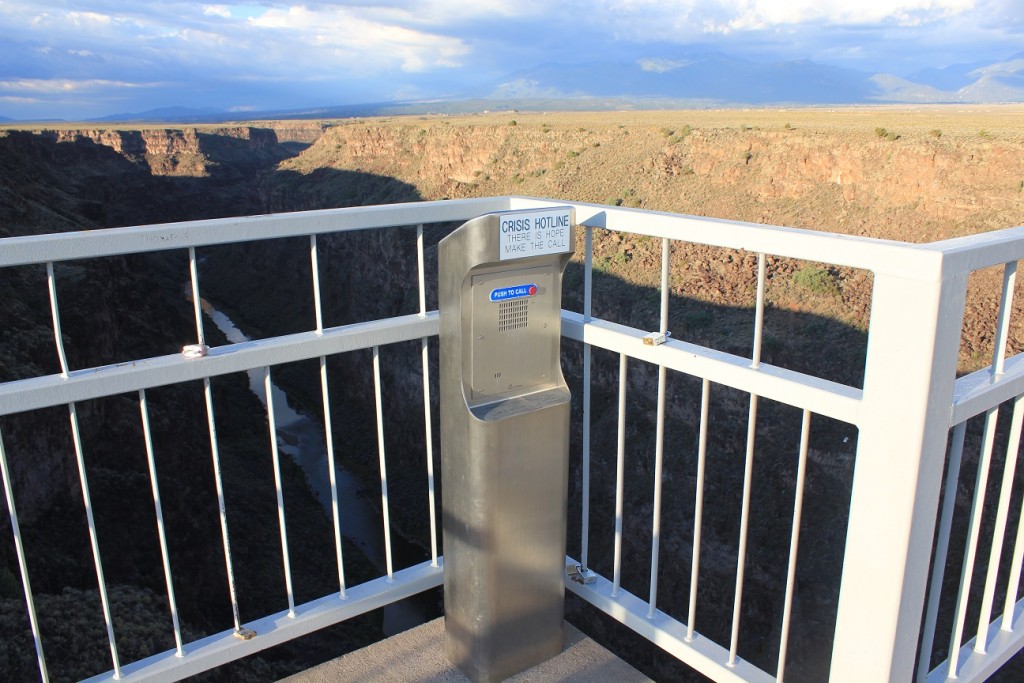 So I stopped, and let Harold walk out to the middle. That’s difficult in itself, so I turned around and wandered over to look at the jewelry being sold by the artisans there. A man told me that the car we could see way down below was the car from the end of the movie Thelma & Louise and I was suitably impressed. In the old days, I would have trusted that bit of info, and passed it on to other people “Oh, this picture shows the wreckage from the car in Thelma & Louise!” I’d say. Probably most people would just nod and accept the information I was feeding them. 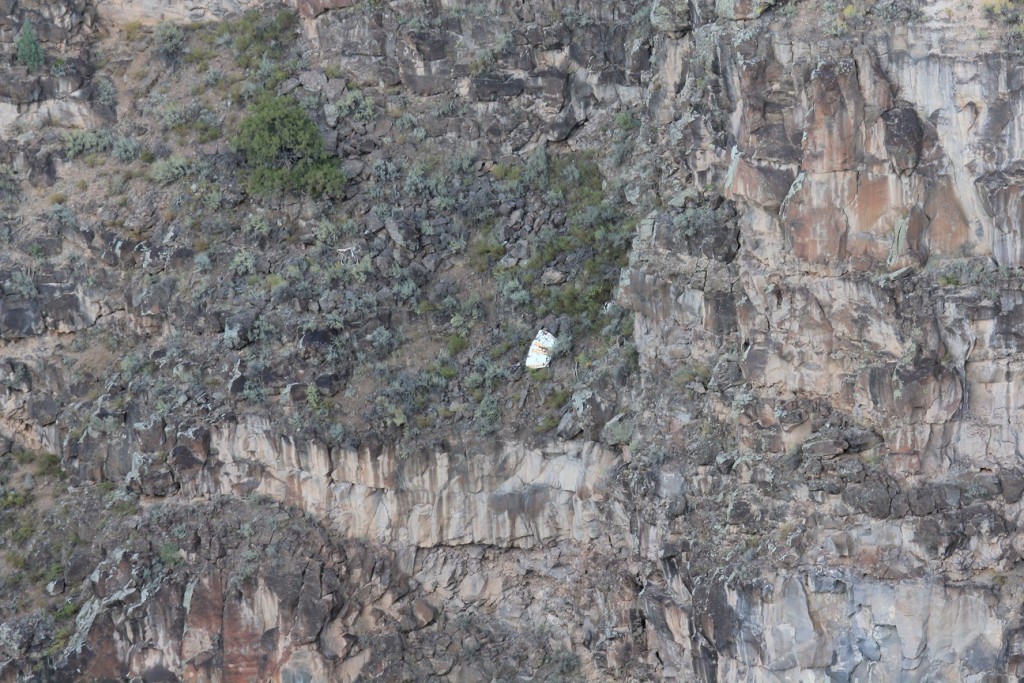 Perhaps once in a while I might come across someone who thought I was wrong. “Wouldn’t the movie company be responsible for cleaning it up?” would be a logical question. Or even “Didn’t they run off the cliff in Texas?” might be another. It would be difficult for either of us to disprove the other, and we’d shrug and move on. 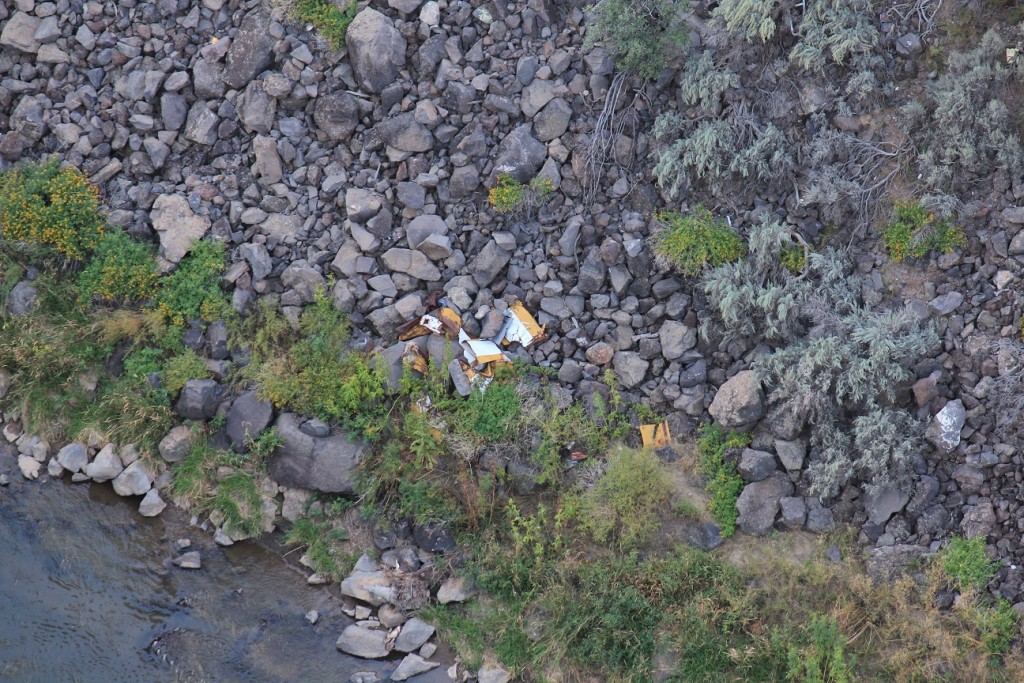 Those are the days people my daughter’s age don’t even have a clue about. These days we can Google it all, and woe to the fool who passes on information without checking it out first. So, of course, that’s what we did, and the guy was full of it. The cliff used in the movie was up in Moab,  south-southeast of the main overlook at Dead Horse Point State Park. The official name of the road is “San Juan County Road 142“ but most people call it “Shafer Trail“. 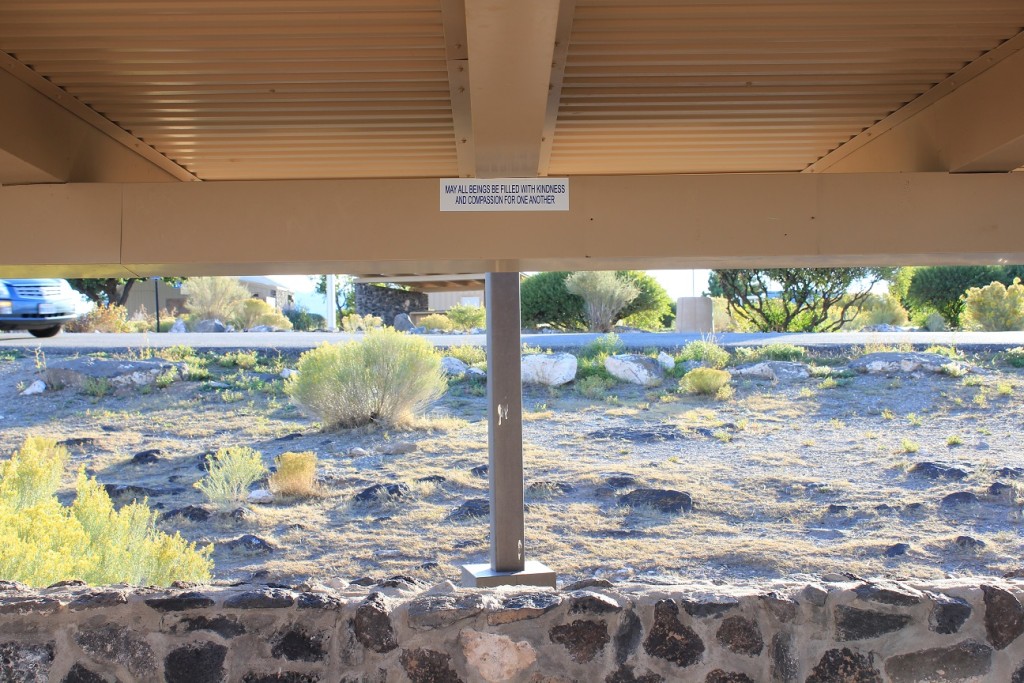 As we headed back, I was still chiding myself for being such a big baby and not going out on the bridge. I made myself feel better thinking “Nobody ever needs to know.” not even considering the disloyal writer side of me who thinks it’s all amusing to write about. 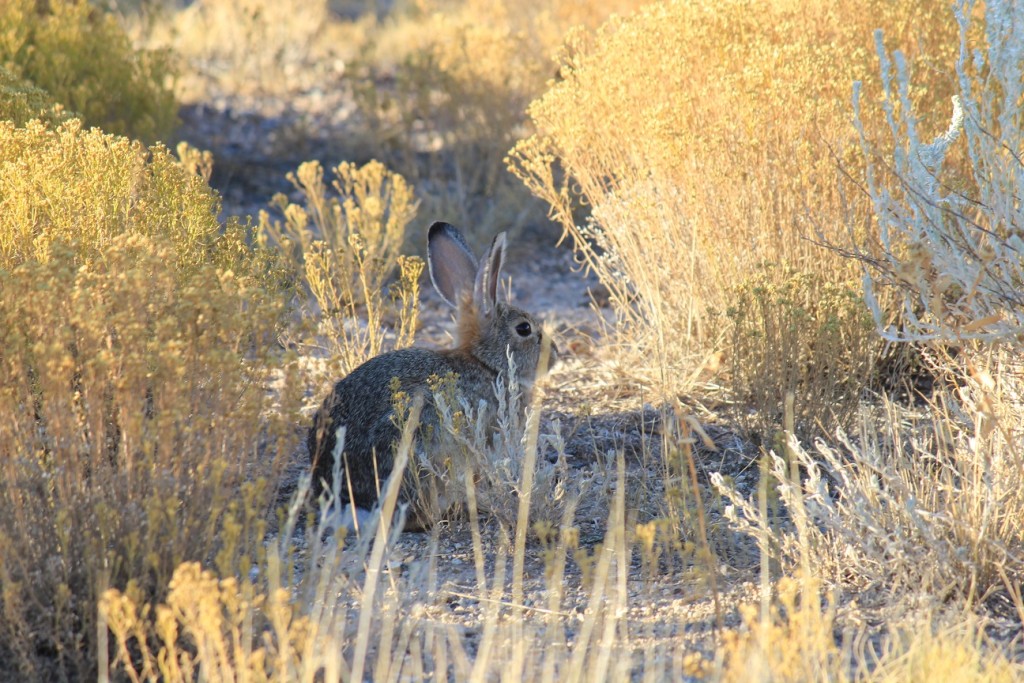 We took a shortcut back to the car, overland through some short brushy grass, and there it was, the shining example of what I’m not afraid of but many others are. 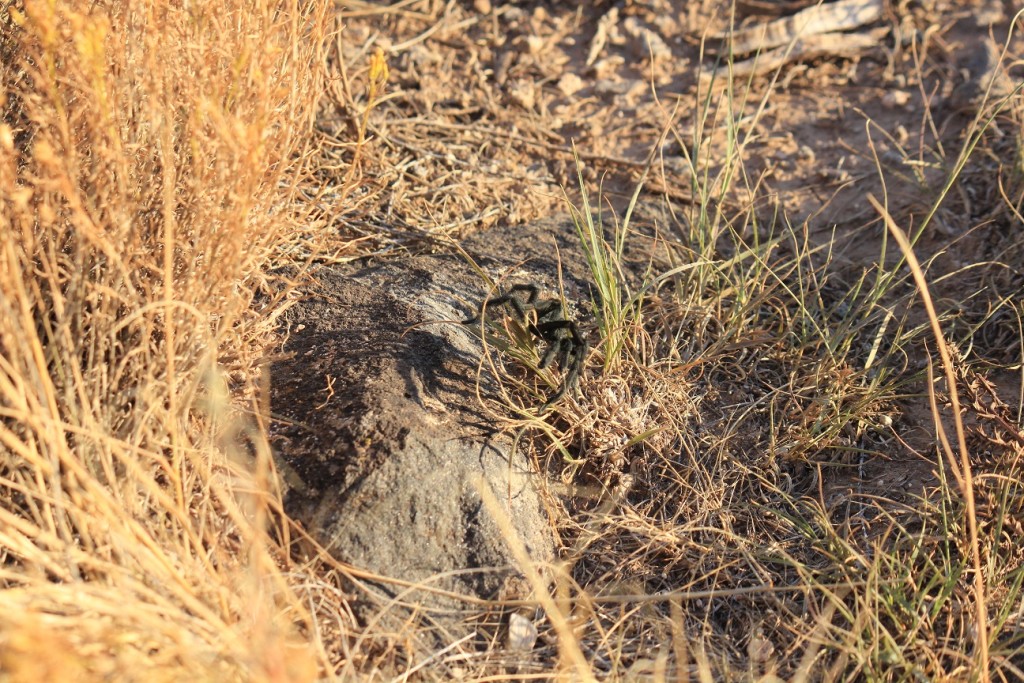 “Look! Look! Look!” I yelled to Harold, all excited. “Right there in the grass!” 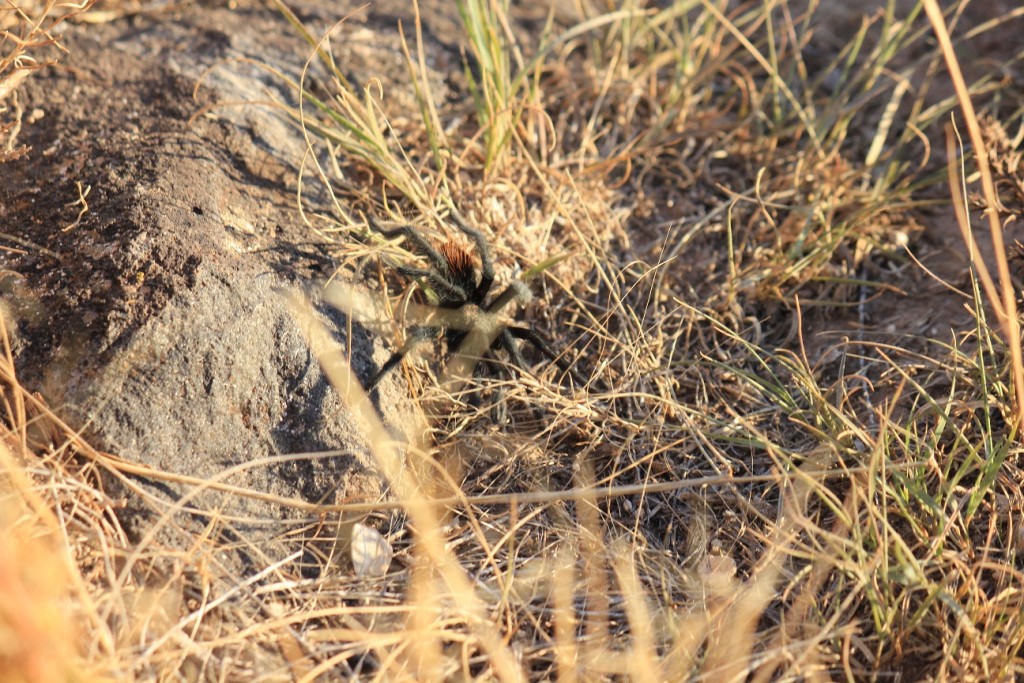 “It’s a huge, hairy, gorgeous tarantula! Quick! Get a photo!” 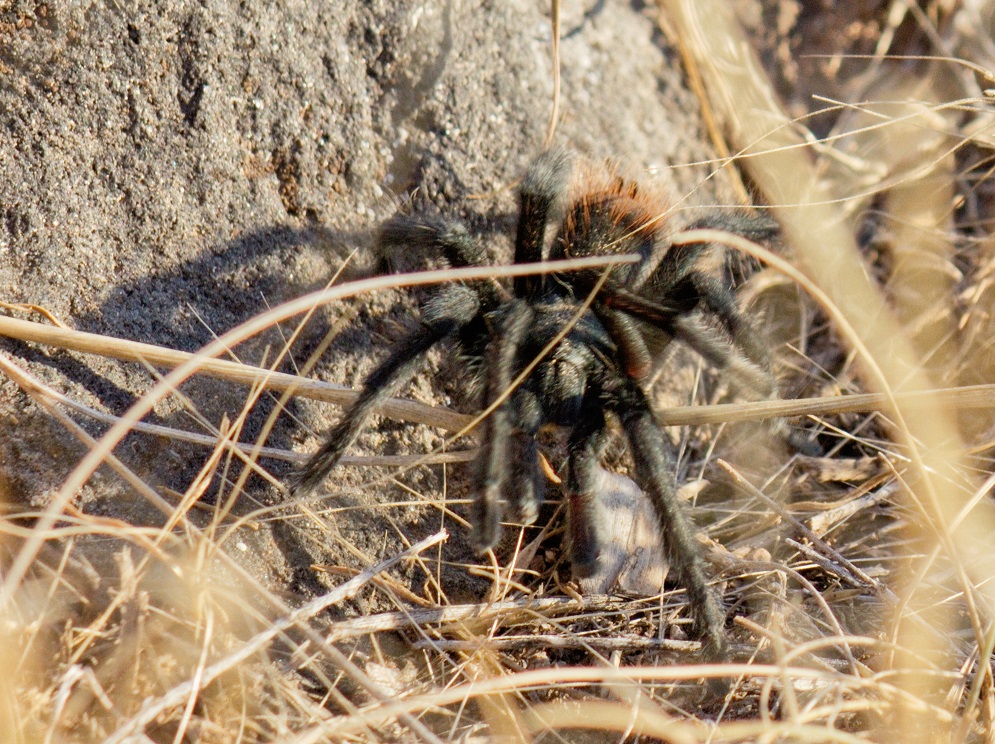 Somehow this little guy helped. We all have our different fears.