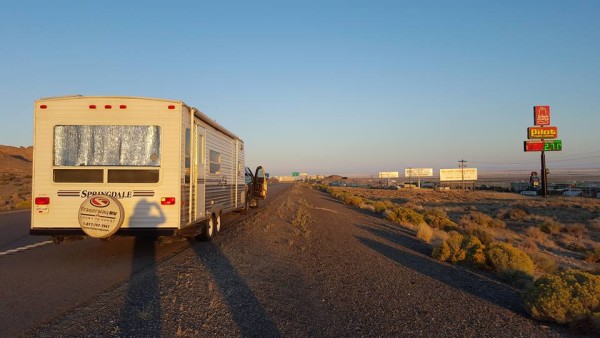 We’re halfway between Elko, NV and Salt Lake City, UT. It’s a gorgeous afternoon, we’re sailing along, still gliding on the high of the previous week. Harold looks into his rear view mirror and says, very casually, “We may have a problem back there.”

“What kinda problem? What’s going on?” I question him.

I’m starting to wonder about it though. Why would he pull over on the side of a highway full of big trucks if it was a minor issue. As he jumps out, I have a vision of him being plowed down by a semi. “I’m coming too!” I yell, as I jump out and run around the other side – because he won’t be safe unless I’m there to make sure he is.

By the time I get to the back, he’s got the trailer door open and he’s grabbing the fire extinguisher. “Are we on fire?” I yell, as I follow him.

“I think the wheel is seized up. It’s smoking.” He yells back, as I peer around the corner to see black billows of smoke rising from the wheel. He blasts the tire with foam, but it doesn’t seem to help much.

“Truck coming! Get back over here!” I yell at him. Thankfully he listens to me – or – well, he runs past me to go get a bucket of water, which puts him out of harm’s way as the huge truck blares past sending the trailer rocking back and forth.

Psssssssshhhhhhhhhhhhh! I hear the metal hissing as Harold dumps the water on it. “Should I call triple A? —- Truck Coming!”

He runs past me again to get more water, “Yeah, I think you’re gonna need to.”

I get the best operator ever at AAA. She has a moment of confusion about my membership number but then understands as I tell her it’s a Canadian number. We discuss what we’re going to need, and she tells me we’re at the top of the list for help since we’re not safe on the highway. She’s got a great personality, and she makes me feel taken care of. I can see we’ve got maybe 30-45 minutes left before sunset, but she tells me it will be 20 minutes tops before the truck gets there.

Five minutes later, I get a call from the driver. He’s on his way, and will be there in  ten minutes. We were lucky enough to have broken down right before the exit to West Wendover, NV, a small casino town right on the border of Nevada and Utah. It’s where Salt Lake City people come to gamble.

When the driver gets there, we discuss our options. We  don’t need a tow. We can tow the trailer as well as anyone else can, but can it be towed down to his garage 1.5 miles away? He seems to think it will be okay if we go really slow and he follows us with his flashers on. 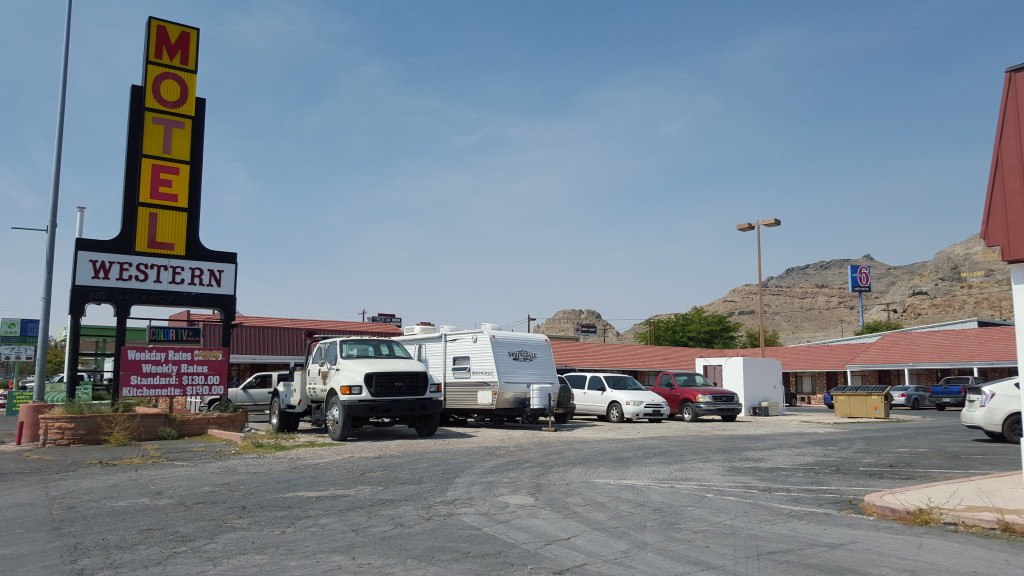 We need to stop twice on the way down, to cool the wheel again with water, and then follow him into a lot full of broken down cars right in the middle of a seedy old motel known as the Motel Western. It’s a combo motel-tow company-dead car lot. At night, the M and O on the sign don’t light up, so it becomes TEL Western. He offers to get us a cheap room for the night, but you couldn’t pay me to stay there. There’s little point to even a nice hotel though – we’re towing our home. He seems confused by this. I guess he thinks trailers have to be in campgrounds or RV parks.

The shop isn’t open on the weekends but he tells us the mechanic will come by at 10am tomorrow and take the wheel off. Then we’ll drive 2 hours into Salt Lake City, pick up what parts we need and he can fix it all up tomorrow afternoon. That sounds great. We’ll lose a day but it’s no big deal. It’s all just a part of the experience.