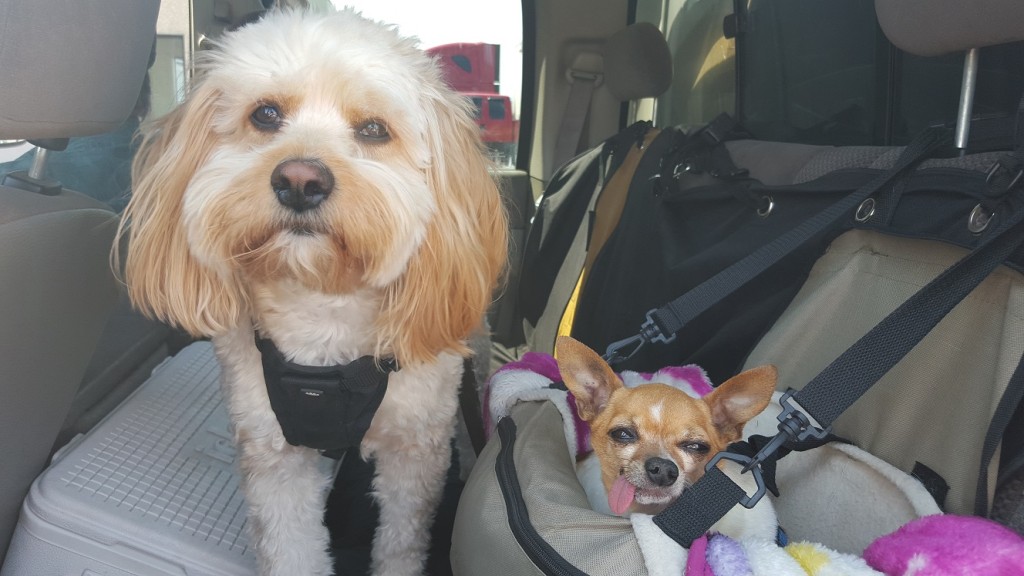 The place we left our dogs at while at Burning Man had been well recommended to us by a friend, so we had felt pretty good about leaving them there. When they brought the dogs in to us, Toonie was in a daze. Harold took her from the woman and I took Teddy. She told us Toonie had some problems with her backend that day so they’d put her on her own.

We got the dogs out to the truck, and I looked back at Toonie. Her eyes were almost rolling back into her head. Something wasn’t right here. When we got back to the trailer, I picked her up and was horrified. She was skin and bones. I could feel her ribs, and her neck was a third of it’s normal thickness. I could encircle her midsection with my thumb and pointer finger. She was so listless and couldn’t even walk. She didn’t have the strength to keep up her back end.

She couldn’t eat the kibble we usually feed her. I fed her some peanut butter and some cheese and she ate it ravenously. That night she went hot and cold, as if she were in a fever. The next morning she was somewhat better but I had to get her to a vet. I called around Reno, and it took me 5 different places until I found one that could get her in right away.

When we got there, I put Toonie down to see if she needed to go pee, and I was so happy to see her able to take about 20 steps. I took her inside, where they weighed her and took all her stats. Her temperature was a little higher but that was normal, they said. Everything else seemed fine, except she’d lost 13 oz. That doesn’t sound much to us, but when you realize, her regular weight is 4lbs 14 oz and she now weighed 4 lbs 1 oz, that’s pretty shocking. It’s 17% of her body weight lost in 9 days! How did they not notice this happening?

The vet’s office didn’t give me the best feeling. First off, they have credit card machines in each room. Secondly, when the doctor was looking her over, she gave a screech and he grabbed her from my hands, to take her to one of his employees because he was worried she’d bite me and I’d sue over it. So when he tried upselling me on what he could do for Toonie, I pushed back a bit. I wanted to make sure what he was wanting to do was necessary and not just suggestive selling me for $1000 worth of unneeded services. In the end, he agreed that she seemed to be getting better on her own, and would probably be okay to go home with me and some really good Urgent Care food.

I’ve been watching her like a hawk since. Harold takes Teddy out for a walk when it’s time for me to feed her. The food would be a snack for Teddy and with his allergies, it’d probably not be good for him. It doesn’t stop him from sniffing at the air when he comes back in, and giving me a dirty look. I actually even caught him sniffing at her breath.

Update 2015/09/23: Teddy was fine. He’s a little leaner but that’s a good thing for him, he was a pound or two overweight. He’s also socializing better with other dogs. Both of them had some sort of virus, which is to be expected from a kennel setting with dogs coming and going. I think, in hindsight, we made a bad choice in leaving Toonie in this sort of place. She is not the sort of dog who would thrive in a pack, even a pack of small dogs. She spends most of her days sleeping, with short periods of play. I expect she spent most of her time trying to get away and hide from the other dogs. We should have left her with someone who would let her have the very laid back lifestyle she is accustomed to. It still bothers me that they didn’t notice what a bad state she was in.

Toonie is getting better, but it’s not happening quickly. She is still very thin and exhausted. We may have to take her in to a vet again if she doesn’t perk up more in the next few days.