The Argolis peninsula separates the Saronic and Argolic Gulfs. It was the seat of power of the Mycenaean empire that ruled Greece from 1600 to 1100 BC. A tour of the region takes us to some of the most important archaeological sites of Greece, including tholos tombs, citadels and ancient theatres.

If you’ve read much of my blog, you’ll see I like to decry the use of bus tours when travelling. However, due to only having 6 days in between getting home from one trip and coming here, we were unable to get an International licence. Our only option was to book some day tours. In the end, we found them all very enjoyable and well worth the money. Plus it’s fun to spend the day with other people.

I recognized the name of the ancient city of Corinth as something-something from some part of the bible. Later, I googled to get more information and found it was from the Apostle Paul’s epistle to the Corinthians in the Bible. This really isn’t something I know much about, but in reading, it sounds like Paul sent Corinth a letter outlining what he saw as their problems (some leftover vestiges of pagan and idol worship) and immoralities (sex at all, but worst of all, outside marriage) and telling them how they should fix everything.

Another memory smacked around in my head of a Ricardo Montalban commercial from back in the 80’s. Something-something about Rich Corinthian Leather.

But we weren’t here for either of those things. We were here to see this – the Corinth Canal.

First proposed in the 7th century BC, and attempted 800 years later, in the 1st century AD, it wasn’t actually completed until 1893. Connecting the Gulf of Corinth and Saronic Gulf in the Aegean Sea, it effectively separates the Peloponnese from the mainland.  The canal, measuring 6.4km (4mi) by 21.4m (70ft) was dug at sea level without the use of locks. It is impassable for most modern ships and has little economic importance other than tourism.

We stopped at the cafe next to the canal for a break. Our guide told us we had 15 minutes for coffee, washrooms, and the beautiful view of the canal. “You will go over there where you may take your beautiful photos.” Our guide said for the first time of many today. The canal, 90 metres (300 ft) down from the bridge is a looooooong way to fall, but it is only half as scary as the Rio Grande gorge in Taos, at 172 m (565 feet) down. No way was I ready to bungee jump it however, even if we’d had time. 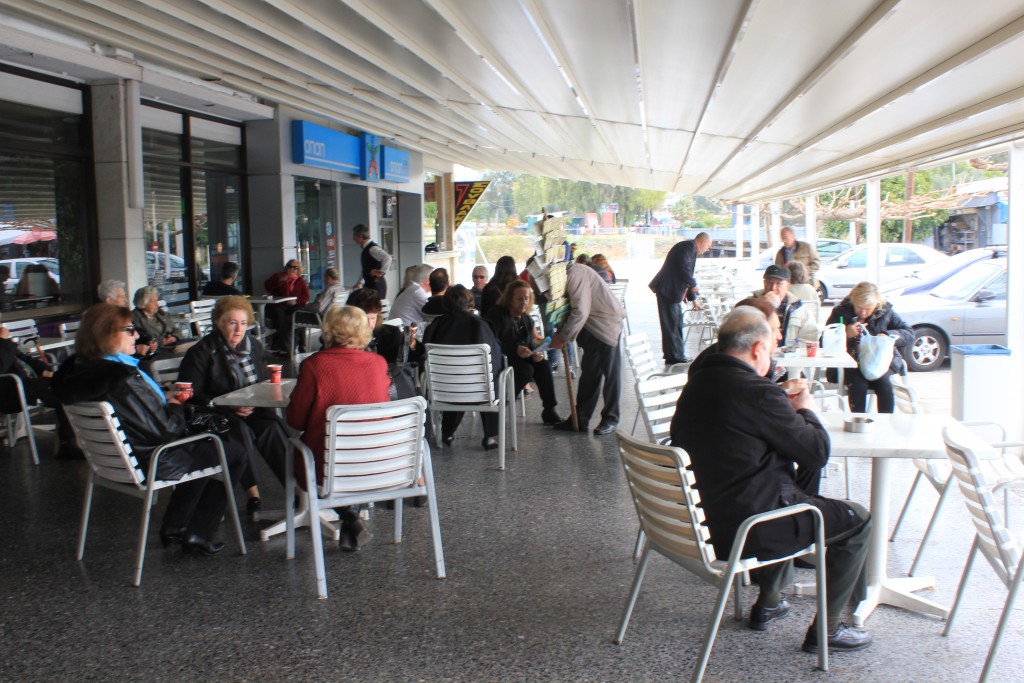 Note the ever present lottery seller with his tickets attached to a pole. You see these guys everywhere in Greece. And every block has an Onan lotto store where there is always a group of middle aged and old men hanging out. Greeks really love their lotteries.

This place was my very first experience with a Greek line – or lack of a line. I followed the droves of little old Greek ladies, fresh off the free Casino bus, down the stairs to the washrooms. Our herd moved through the door into a large room lined with stalls. I expected everyone to line up and each wait for the next stall to open up.

Instead, everyone spread out into a crowd, each selecting a stall to form in front of, then push in wherever they saw fit. It was much like the way Greeks drive. Nobody gets upset at the gaggle, they are all used to it. This is just the way it’s done. I was pushed one way and then the other by these tiny, geriatric old ladies, and had to push aside my instincts to let them all go first. Otherwise I’d never have got through. I chose a door with a group of more robust women – so I didn’t hurt any frail little old thing by accident – and pushed against the tide to get through, into a stall. Once done, I had to push myself through them all over again to get to the wall of sinks. My one saving grace was that I stood head and shoulders above the throng. 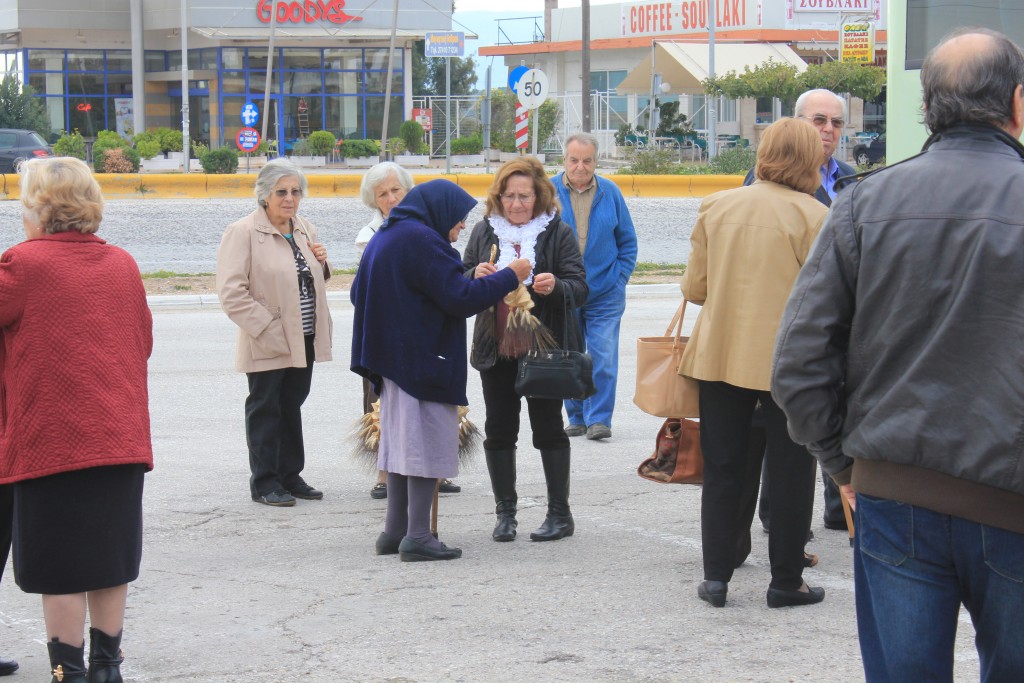 I asked our guide what this lady was selling. She told me Greeks buy them to hang on their doors and ward off bad luck.

Epidaurus was a small city in ancient Greece, on the Argolid Peninsula at the Saronic Gulf. Legend says that this was the birthplace of Apollo’s son, Asclepius the healer, and it was known for both it’s sanctuary, the most celebrated healing centre of the Classical world, and this theatre. 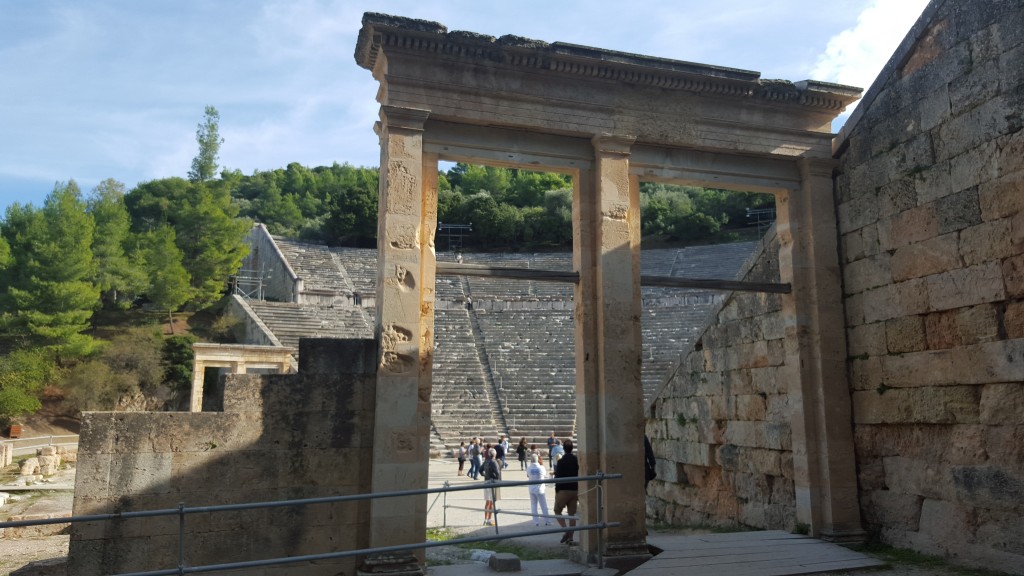 Entry gates on one side of the theatre.

View of the lush countryside that serves as a backdrop to the theatre. 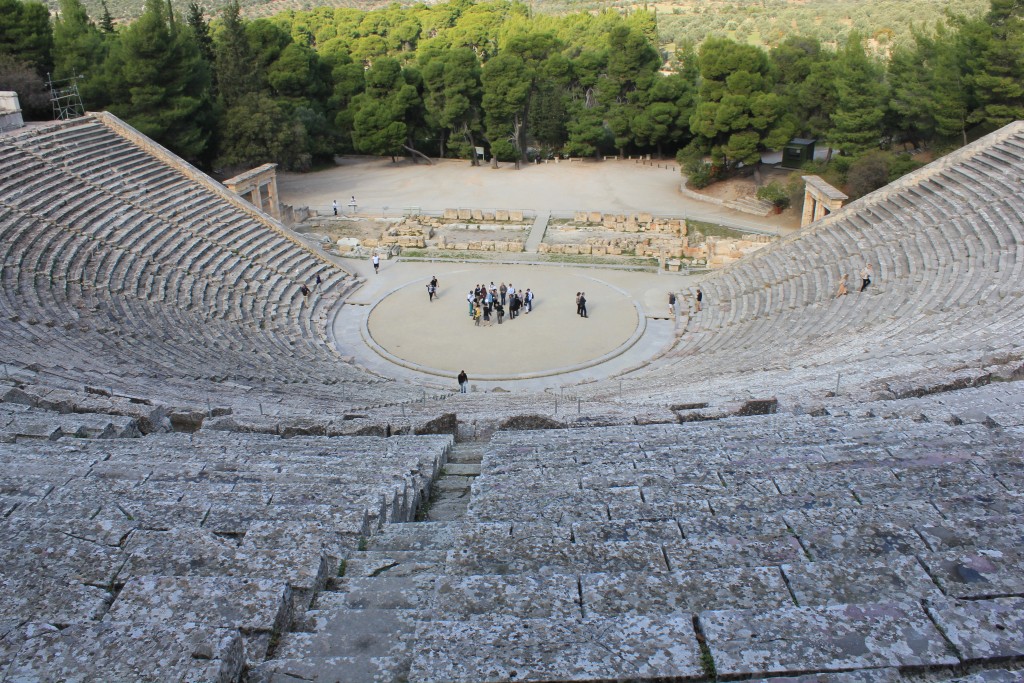 Designed in the 4th century BC by Polykleitos the Younger, the theatre seats up to 14,000 people and looks out over a beautiful landscape. The most amazing part of it are the acoustics. There is a stone in the very centre and the slightest sound by it is amplified all over the theatre. We watched the group shown here arrange themselves in a large circle, then all clap as they slowly moved closer to the centre, and it was amazing how the sound reverberated. From up above here, you can hear even a pin drop down below. 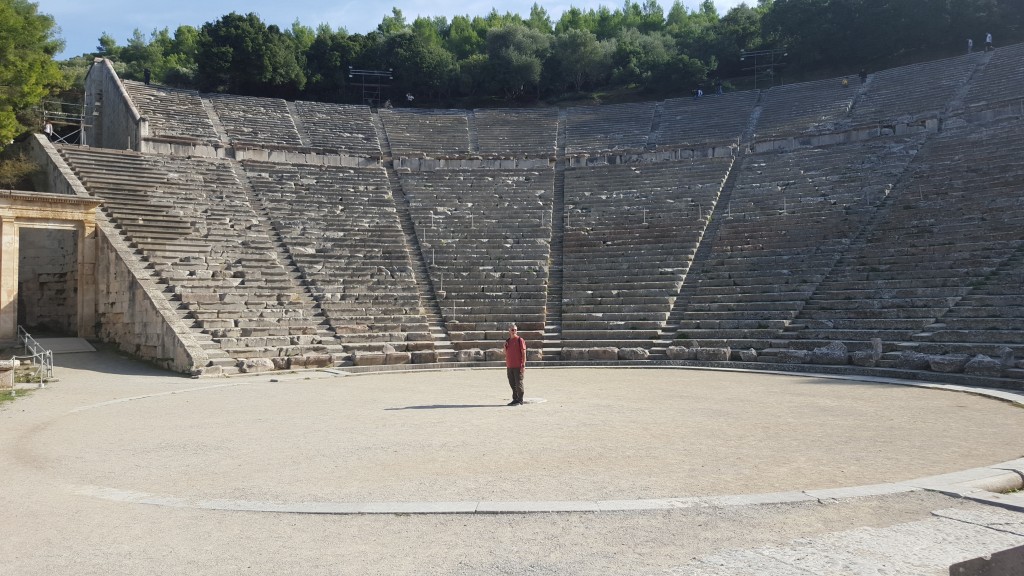 Harold standing all alone on the stone, whispering sweet nothings at me that everyone in the theatre could hear. 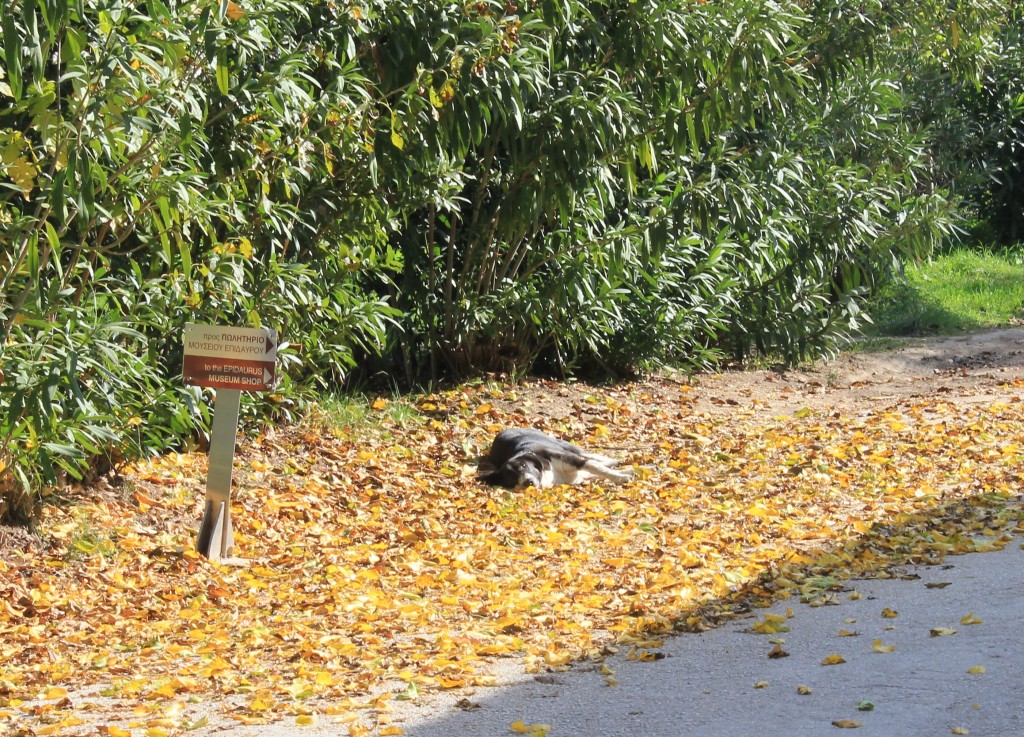 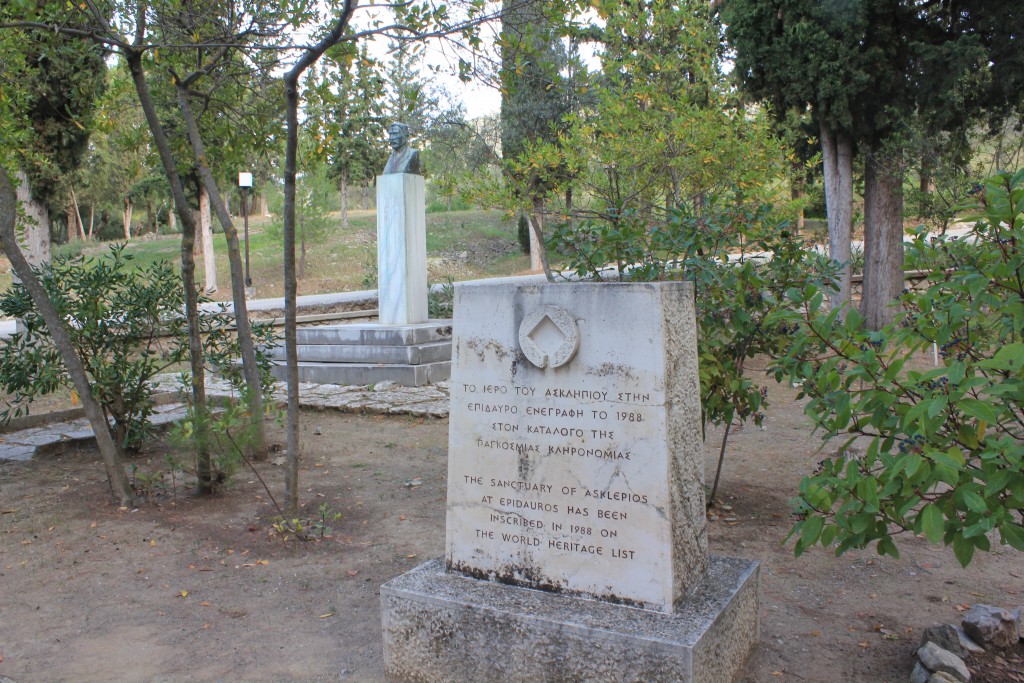 A World Heritage Site is a place (such as a building, city, complex, desert, forest, island, lake, monument, or mountain) that is listed by the United Nations Educational, Scientific and Cultural Organization (UNESCO) as being of outstanding cultural or physical significance.

The Sanctuary of Asklepios at Epidaurus is on the list as the earliest organized sanatorium. It is vitally important in the history of medicine, transitioning from faith-based healing to the science of medicine. What began as a sanctuary for the cult of Apollo, and then became a sanctuary for the cult of Apollo’s son, Asclepius, later became the therapeutic center of the ancient world, spreading it’s practices to the rest of the empire. 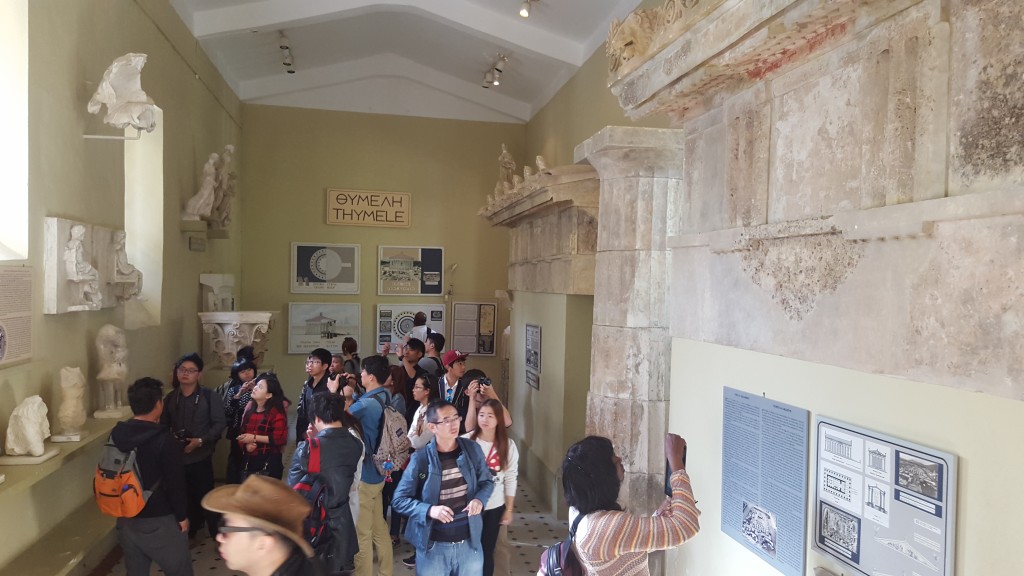 Archaeological Museum of Epidaurus houses reconstructions of temple and architectural pieces found at Asklepieion. It’s all very interesting to look at and take pictures of, but I have to admit that I end up paying more attention to the people than I do the pieces on the wall. 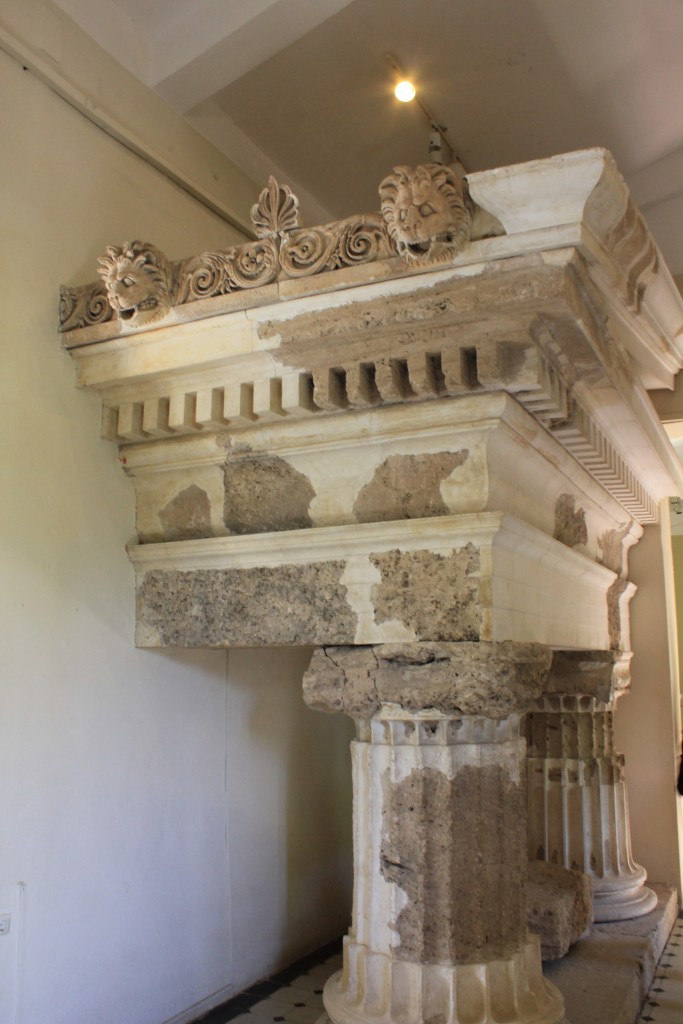 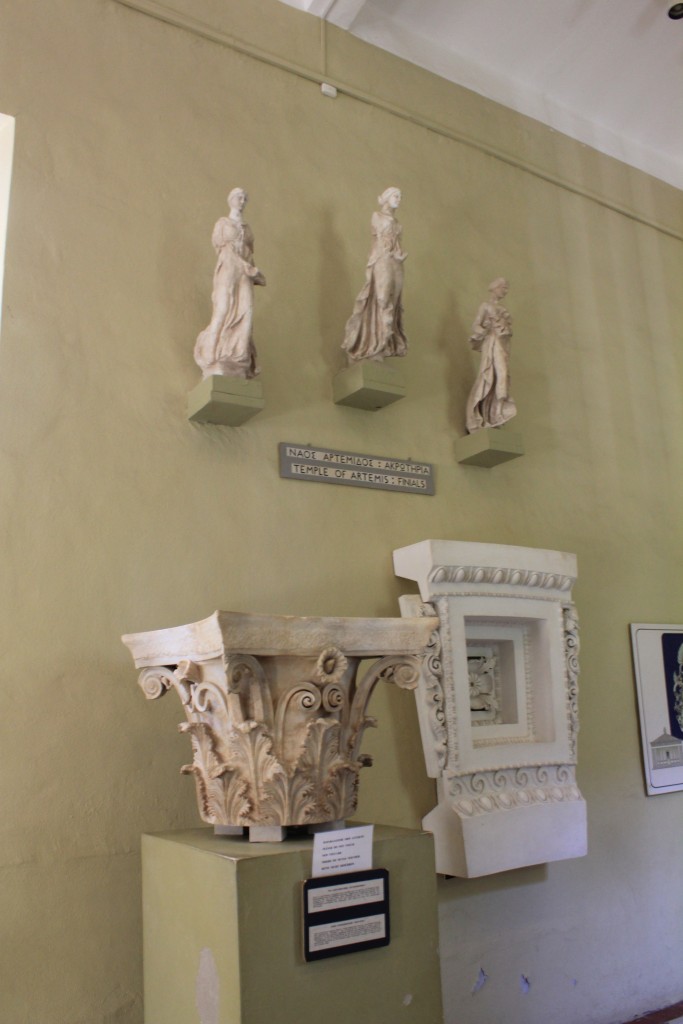 Temple of Artemis finials over top of the Corinthian capital found below the foundations of the Tholos temple. 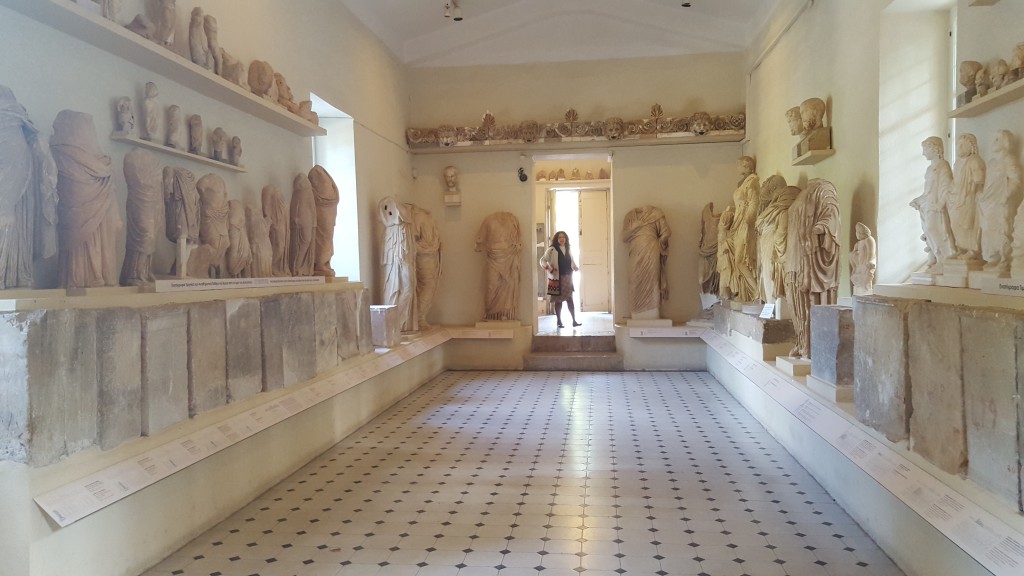 I waited and waited for all the tourists to get out of this photo, and then just as I clicked, the woman who works here walked into the shot. 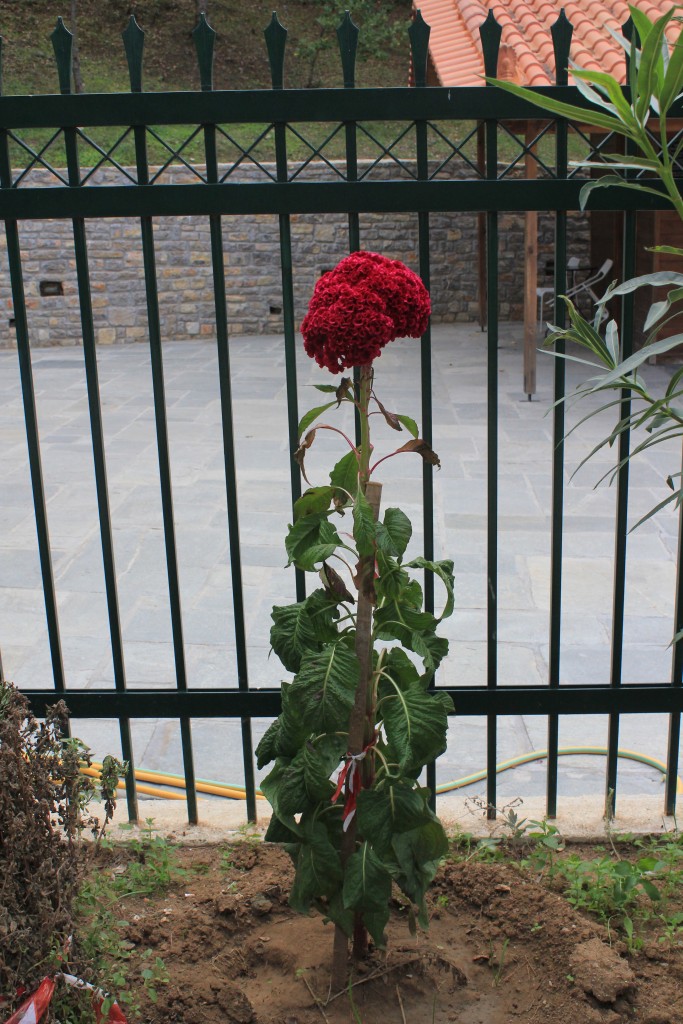 The castle of Bourtzi, built by the Venetians in 1473 to protect the city from pirates and invaders,  lies right out in the middle of the harbour. In 1822, the Greeks took it from the Turks, and it served as a fortress until 1865. After that it became a residence for the executioners of convicts from the Palamidi fortress. Later, in 1930, it became a hotel. Since 1970, it has been a tourist attraction. In season, you can take a boat over to the very small island for €4.50.

The clock tower stands up above the town where the Acropolis used to be.  A gift of King Otto of Bavaria, ironically it was blown up by the Germans in WWII because it was in the way of their machine guns. After the war, the tower was rebuilt and the same mechanism began ticking once again on September 14, 1949. 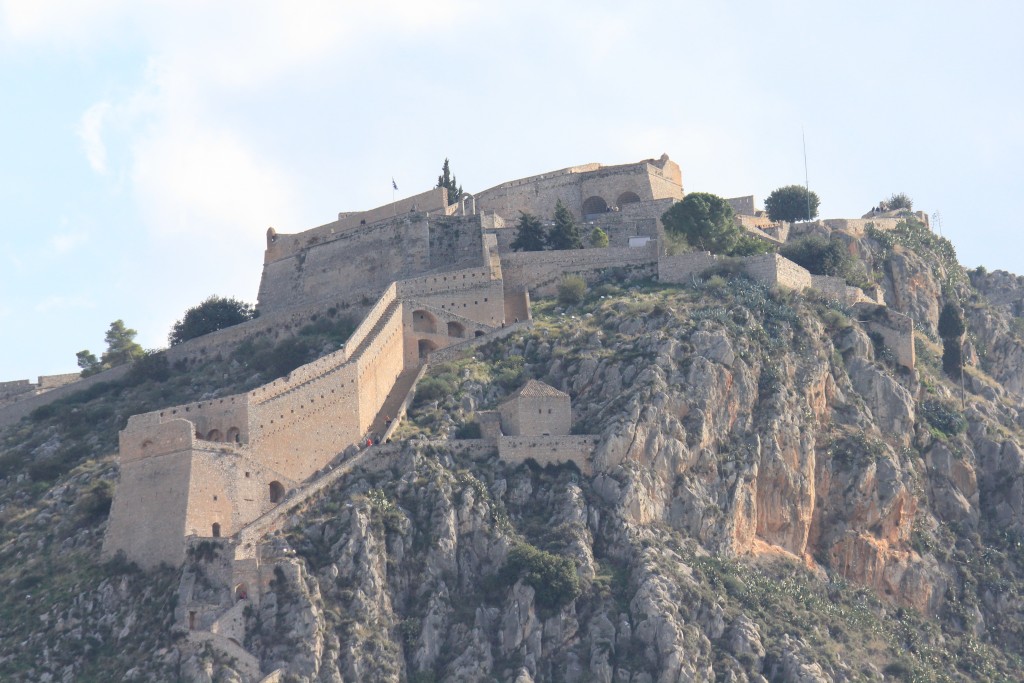 Palamidi is a fortress on the crest of a 216-metre high hill, up above the town of Nafplion. Like Bourtzi below, it was built by the Venetians, 1711-1714, during their second occupation. The Turks captured it in 1715, and the Greeks captured it in 1822, along with the Bourtzi fortress and the town. 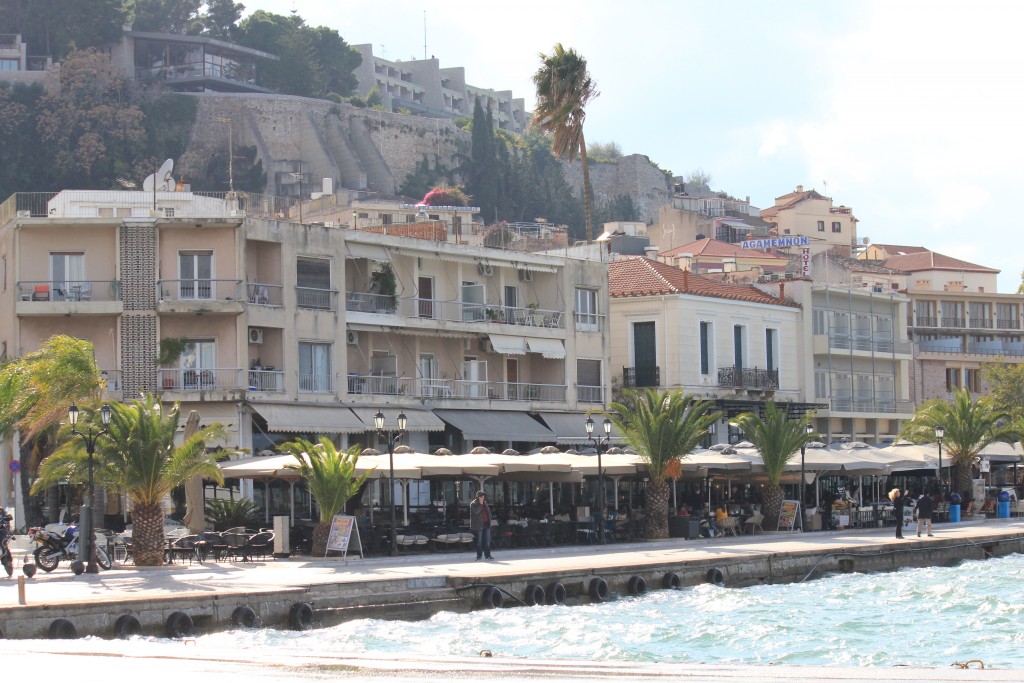 There are over 1000 steps between the town and the fortress, though locals will tell you there are only 999, a number used by many restaurants in town.

City view from port of Nafplion. 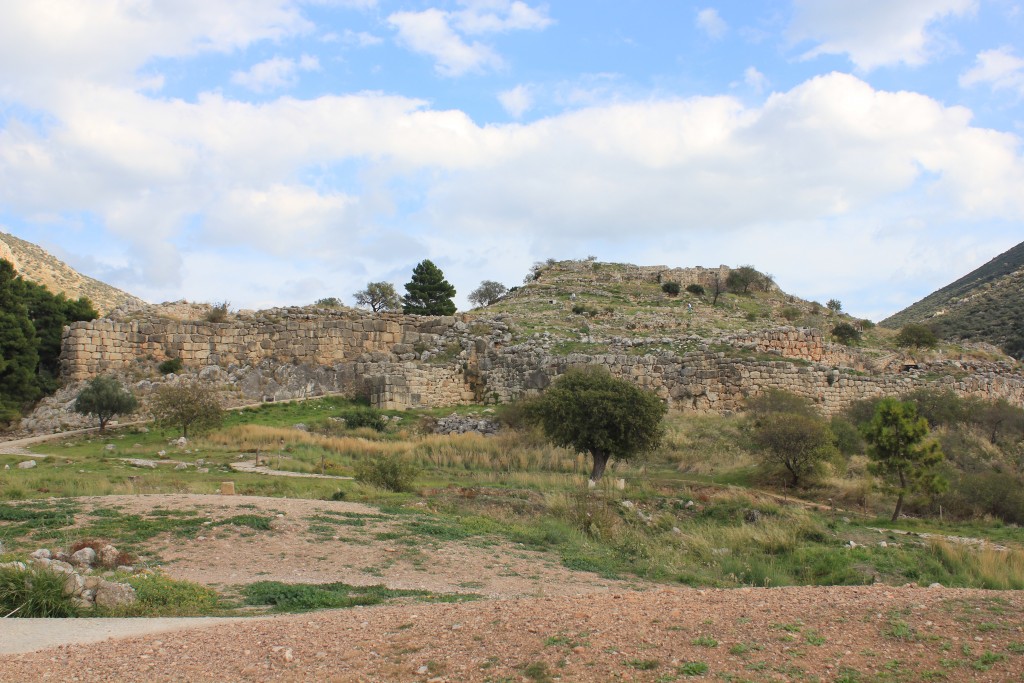 Mycenae is an archaeological site located about 90 kilometres (56 miles) southwest of Athens, in the north-eastern Peloponnese. In the 2nd millennium BC, Mycenae was one of the major centres of Greek civilization, a military stronghold which dominated much of southern Greece. The period from 1600-1100 BC is called Mycenaean in reference to this place. At its peak in 1350 BC, Mycenae had a population of 30,000 and an area of 32 hectares. 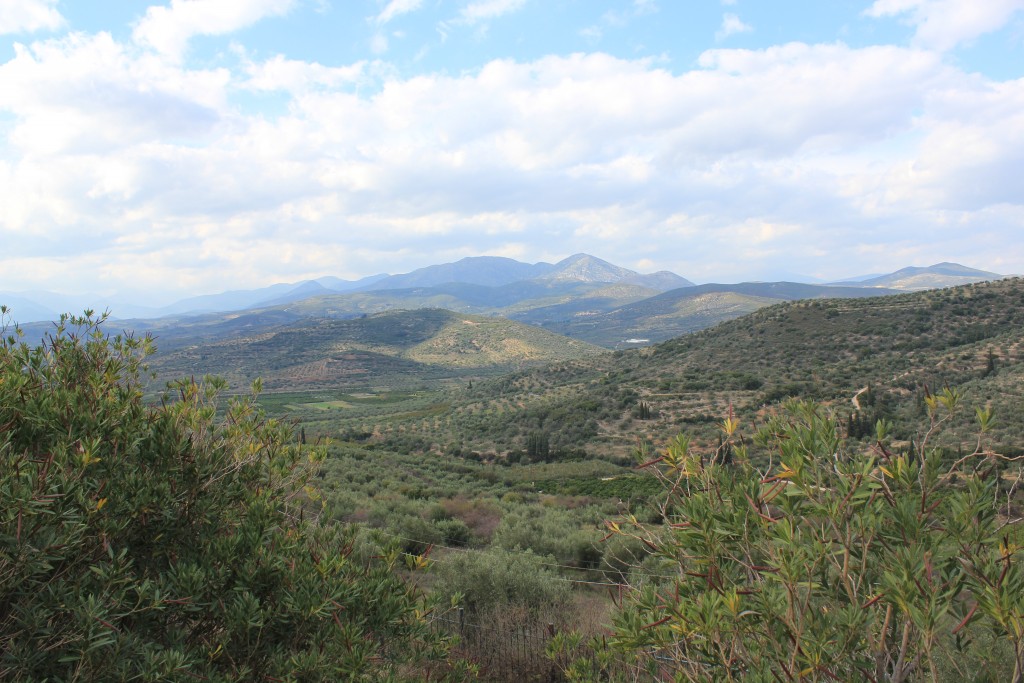 From the hill on which the palace was located, one can see across the Argolid to the Saronic Gulf. This made it a perfect location to guard against invaders. 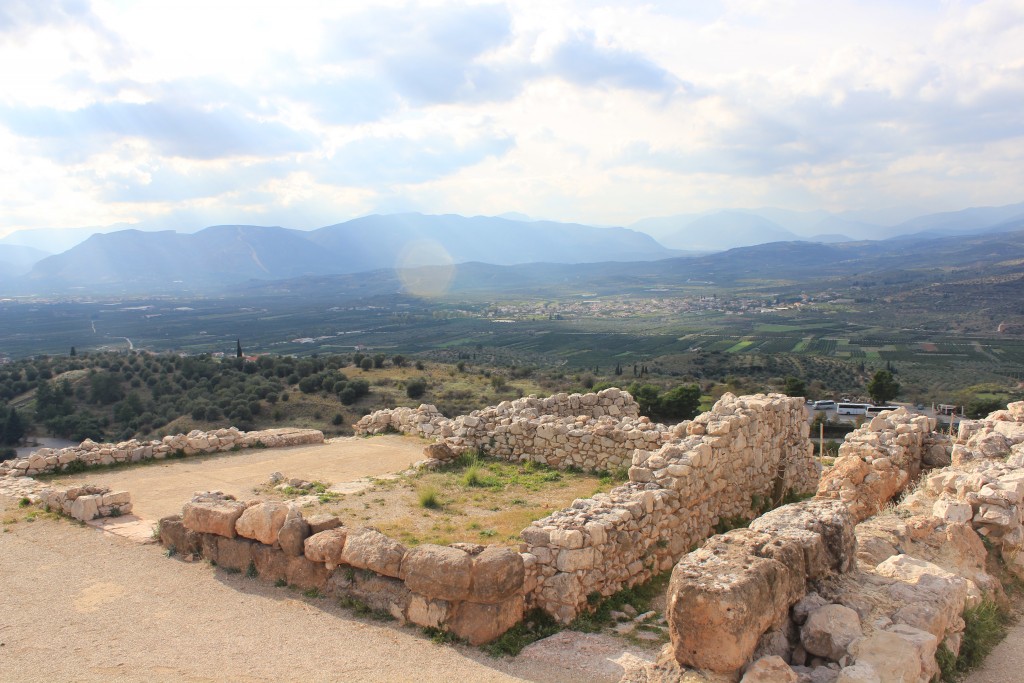 Following descriptions from Homer and Pausanias, the archaeologist Heinrich Schliemann first excavated this site in 1876.

The Lion Gate, erected during the 13th century BC,  was the main entrance. It is a sculpture of two lionesses flanking a central column. It is the only surviving monumental piece of Mycenaean sculpture and the largest prehistoric Aegean sculpture. 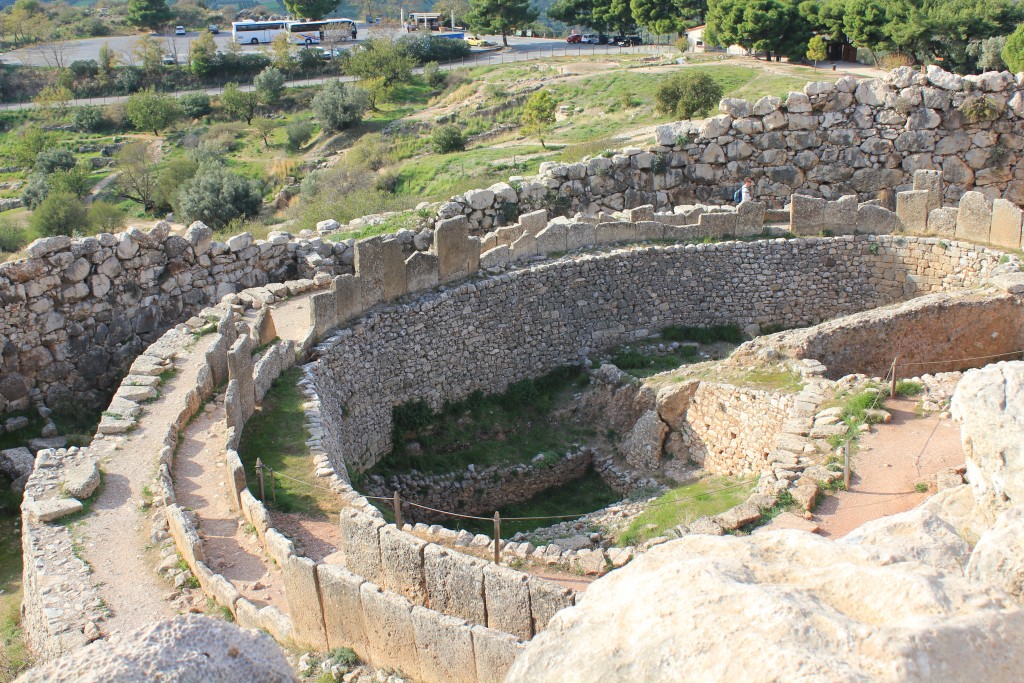 One of the gold masks unearthed became known as the “The Death Mask of Agamemnon“.  According to Greek mythology, Agamemnon was the ruler of Mycenae. These graves have since been dated 3 centuries before Agamemnon’s time so it could not have been his mask. 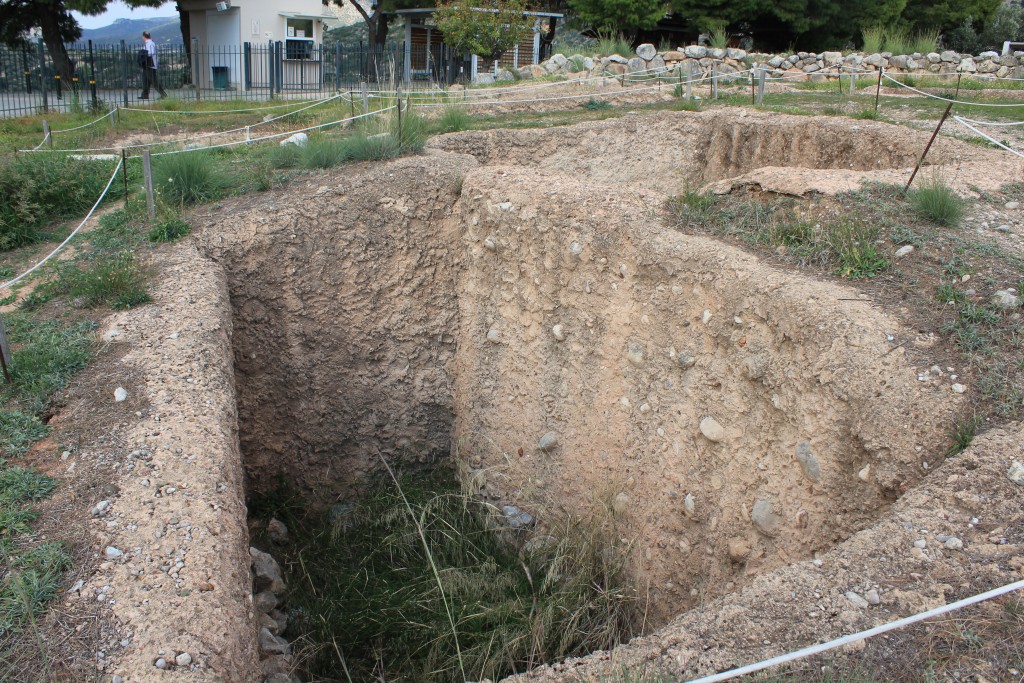 Interior Grave Circle B – 17th-16th century BC royal cemetery built outside the citadel of Mycenae. Enclosed by a circular stone wall were 14 shaft graves (a deep, rectangular burial structure) and 12 cist graves (a small stone-built coffin-like box). 6 of the shaft graves were family tombs that contained multiple bodies. A total of 24 bodies were found in the shaft graves. 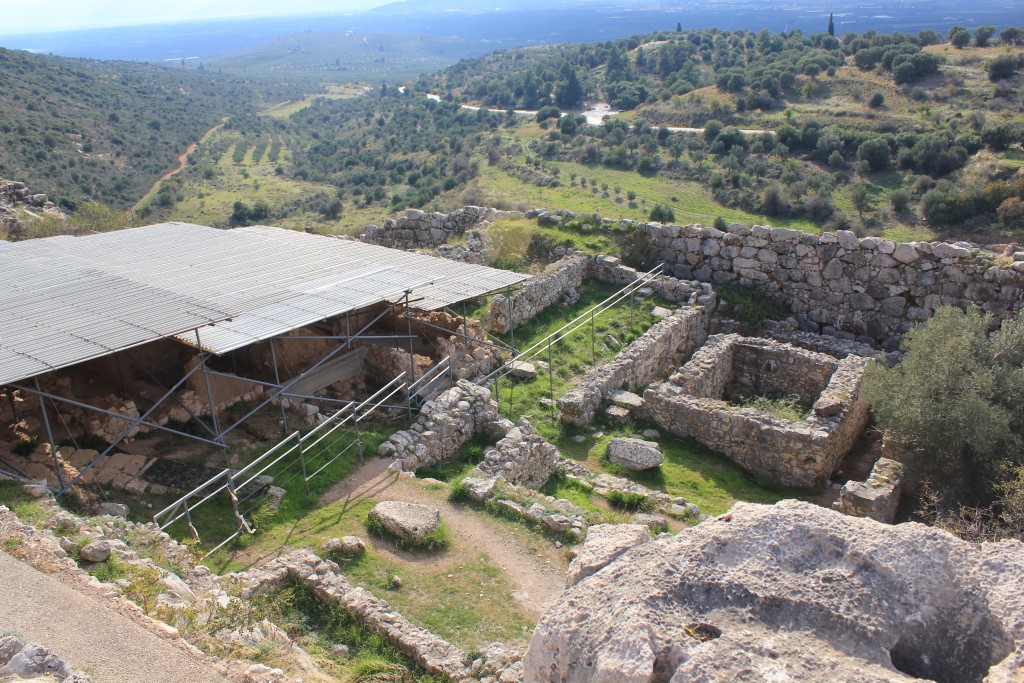 Residences and cult center of Mycenae – The cult center was five building complexes from the early 13th century BC that was destroyed in the latter part of that century. After that, the site was occupied by houses which were used until the end of the Mycenaean period.

It’s a dog day afternoon. Moments before, this dog had been very friendly and happy to have my attention. 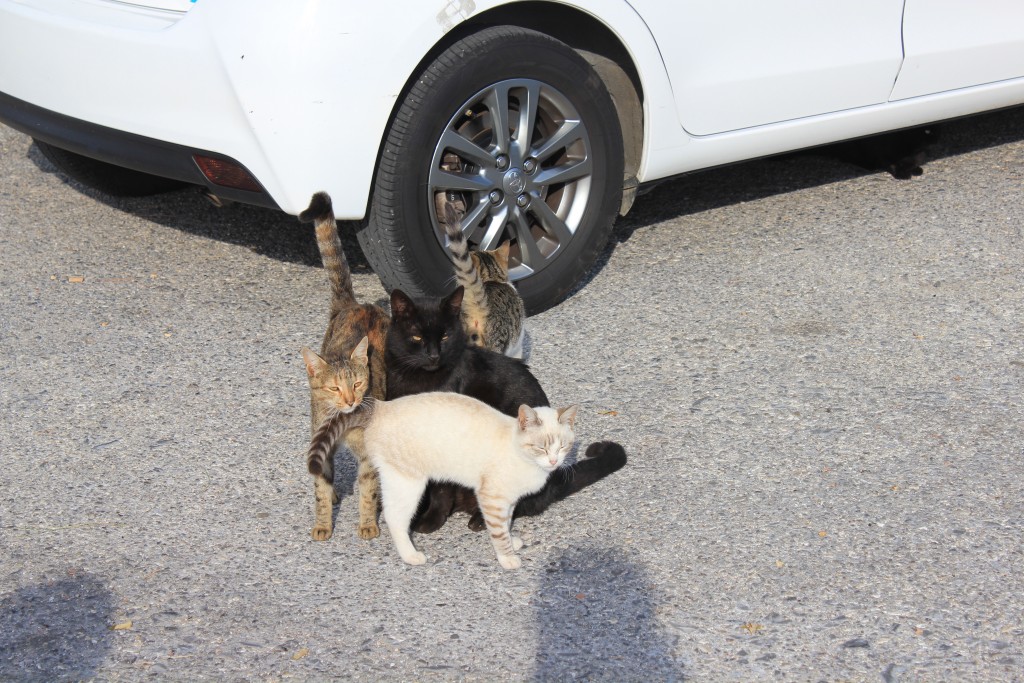 There is no better cat than a Greek cat, and of those, the Mycenaen cats are the most loving. I could have adopted them all. If I lived here, I would probably turn into a crazy cat lady. 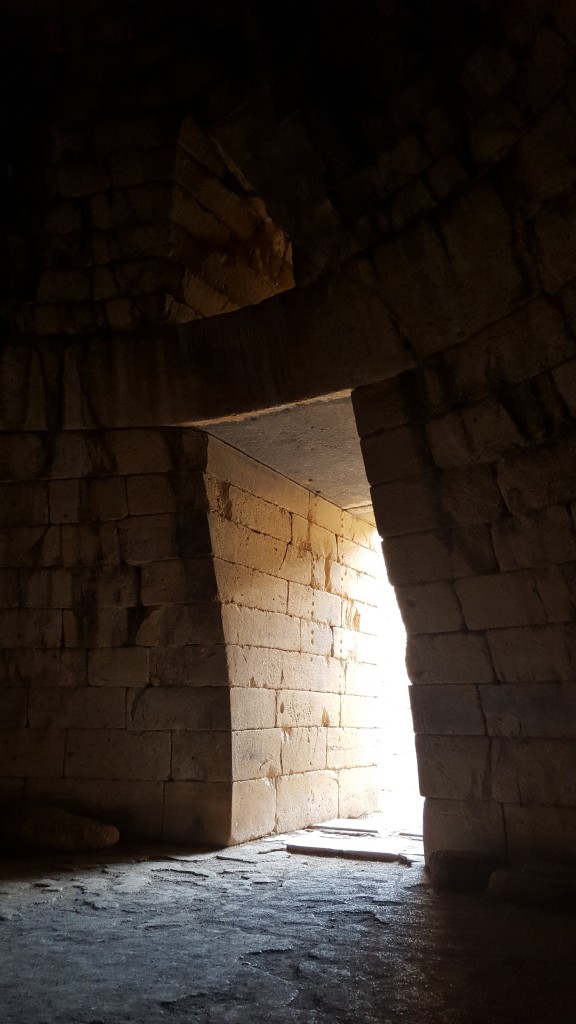 The Treasury of Atreus, built between 1350 and 1250 BC is the best preserved tholos tomb found. The German archeologist Heinrich Schliemann believed that it was the tomb of either Agamemnon or his father Atreus, however more recent archaeologists have found that the tomb is from an earlier period and probably has some other  sovereign buried there. The grave is in the same style as the other 8 tholoi found around the citadel. This one, however, is the most impressive monument surviving from the Mycenaean period. 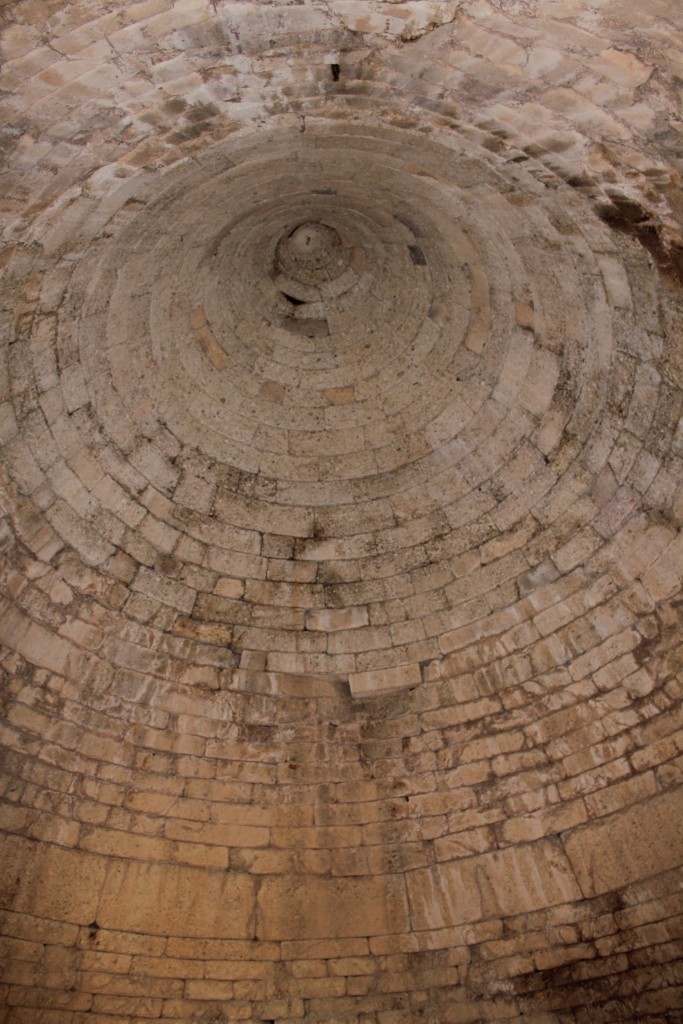 It looks and feels like you are inside a hive. 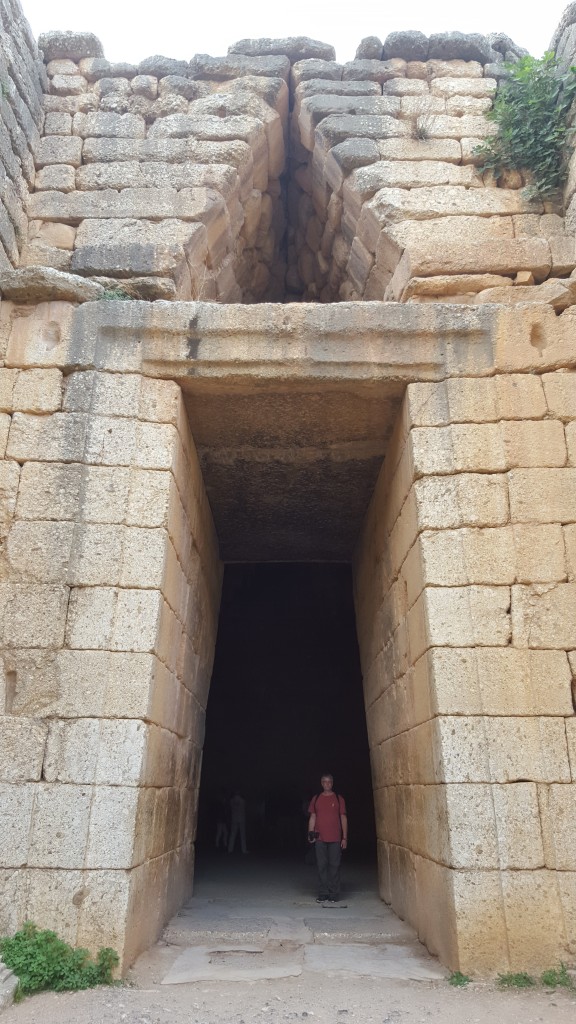 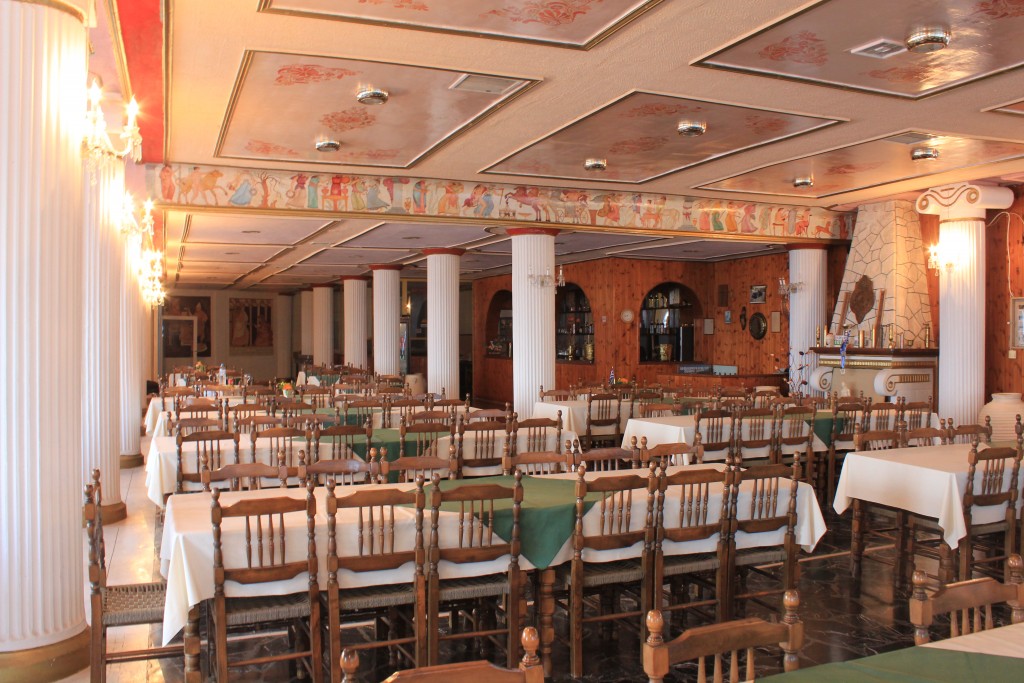 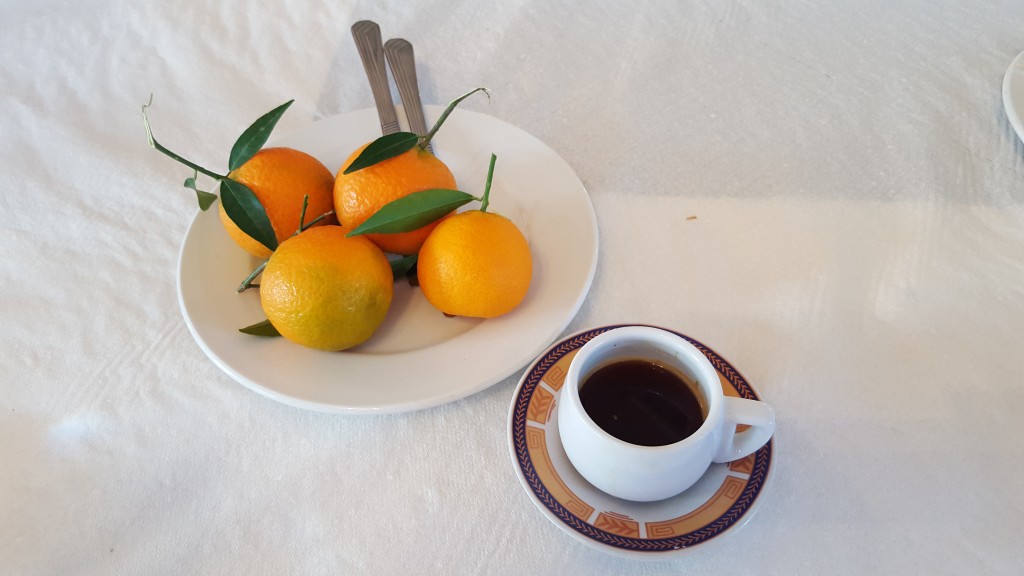 A 3 course traditional Greek lunch could be included in this tour, or you could order from the menu. There were 3 other vegetarians with our group, two men from Hong Kong, and a woman from England. 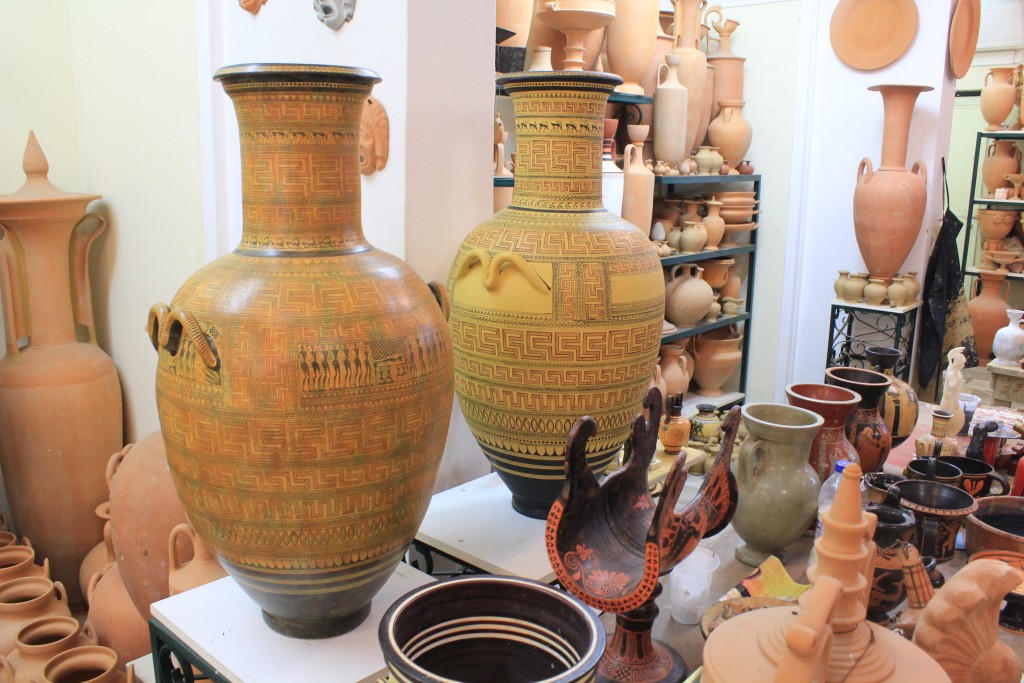 No tour would be complete without the obligatory stop at the souvenir shop. This one was actually interesting. They gave us a short lecture on the difference in styles and quality of Greek pottery. They had some very beautiful items, but the places that tours stop are always more expensive, and we just don’t buy stuff other than maybe a small gift for someone back home. We’re here for the memories, not the stuff. 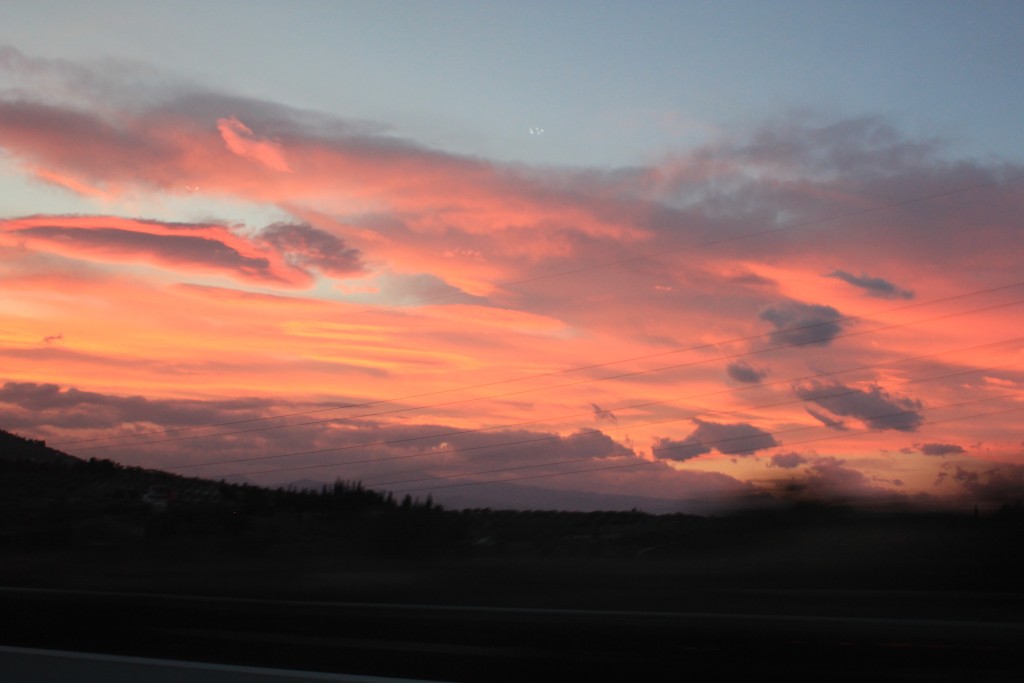 There was an absolutely gorgeous sunset tonight and it was at it’s most beautiful when we were driving past the Acrocorinth. This was the best shot I could get through the bus window. 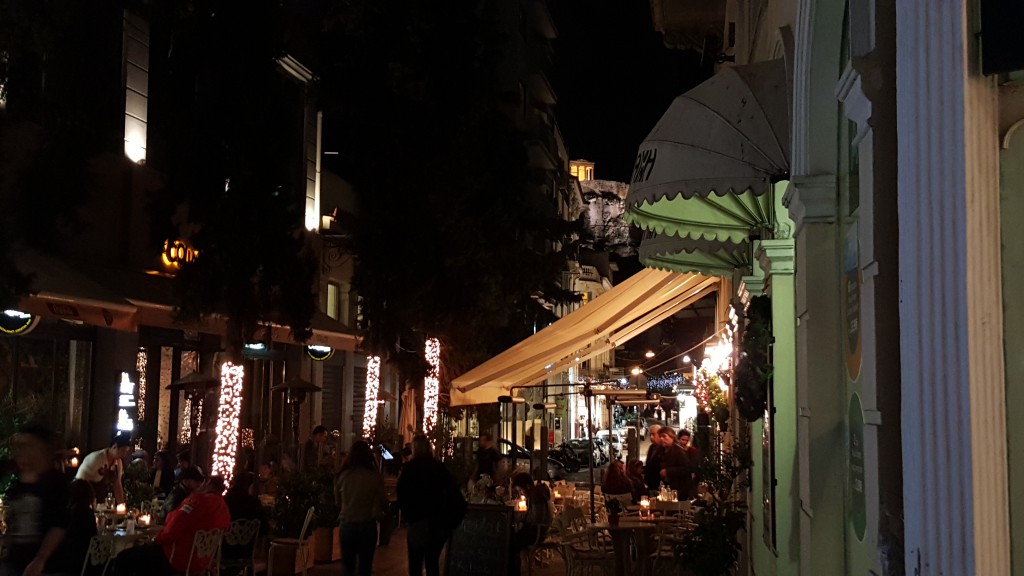 We were able to get the driver to drop us off near Monastiraki square where we had a lovely dinner under the Acropolis. 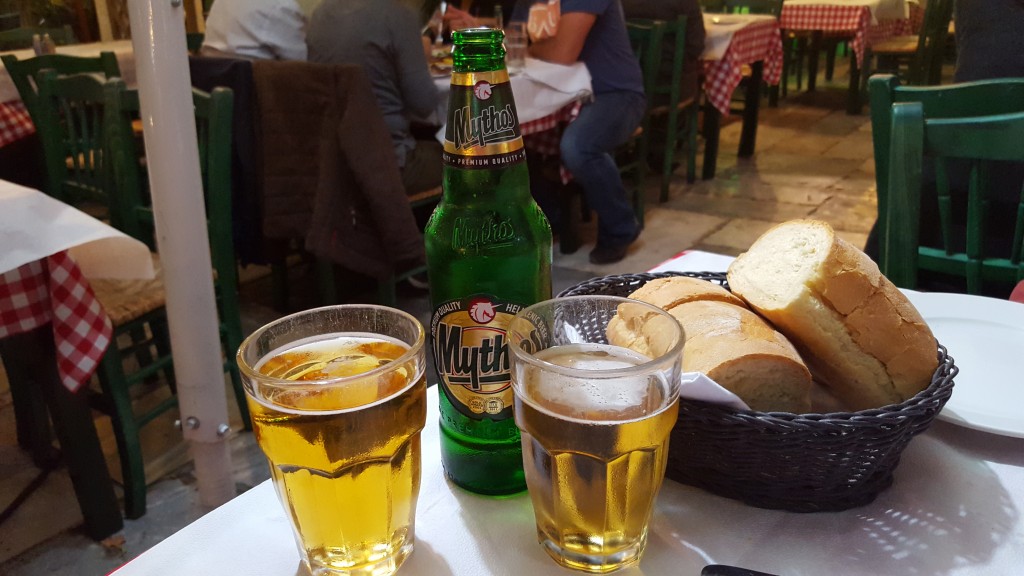