After spending a month in Athens, I find it a little overwhelming to write about all that we did. But I’ll put one finger in front of the other and start off here, on our first day, wandering through the city, with the Acropolis looming over us from every vantage point.

For Harold, this was a work trip, so he’d be busy most days, at the Athens office, and I would spend most of my time alone, except for the weekends. The hotel we stayed at – the Athens Ledra – is a very nice business style hotel. It’s a good location for business travellers, and it was nice to have a big room I could work in, but it’s not the best location for tourists. If I had booked our hotel, I’d have been closer to the Plaka and Monastiraki Square or at least closer to the metro. They do have an hourly shuttle to the area for 2Euro and it’s not a super long walk. It’s just not a very nice walk along such a busy road. 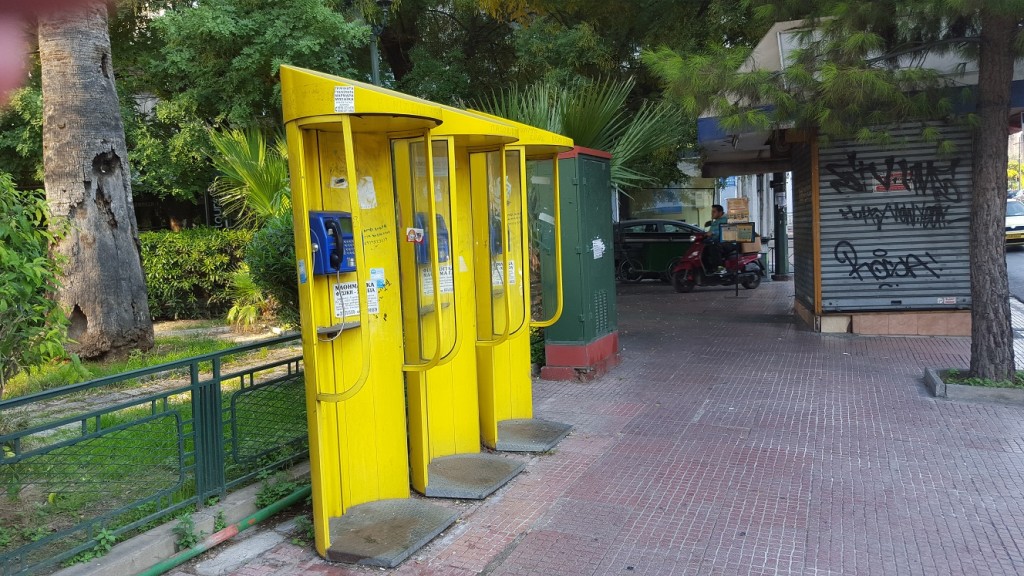 We arrived Saturday night and went straight to bed upon arrival. As I have come to expect when I travel overseas, I awoke at 3am and couldn’t get back to sleep. Breakfast started at 630am and we were the first in there. 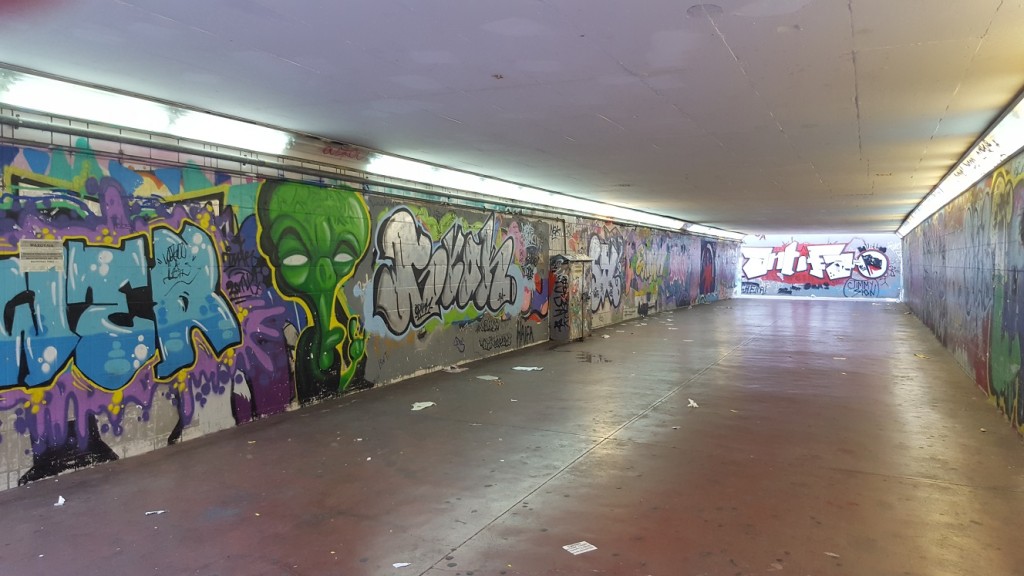 This was a Sunday, so Harold was available to explore with me today. He has been to Greece a few times before, but always on business trips. I already knew the city pretty well from all my research in 2014 when my daughter and her friend came here. It’s amazing how well you can get to know a city through Tripadvisor, and Google street view. So even though, I’d completely forgotten my travel book at home, we had no problem finding our way around. 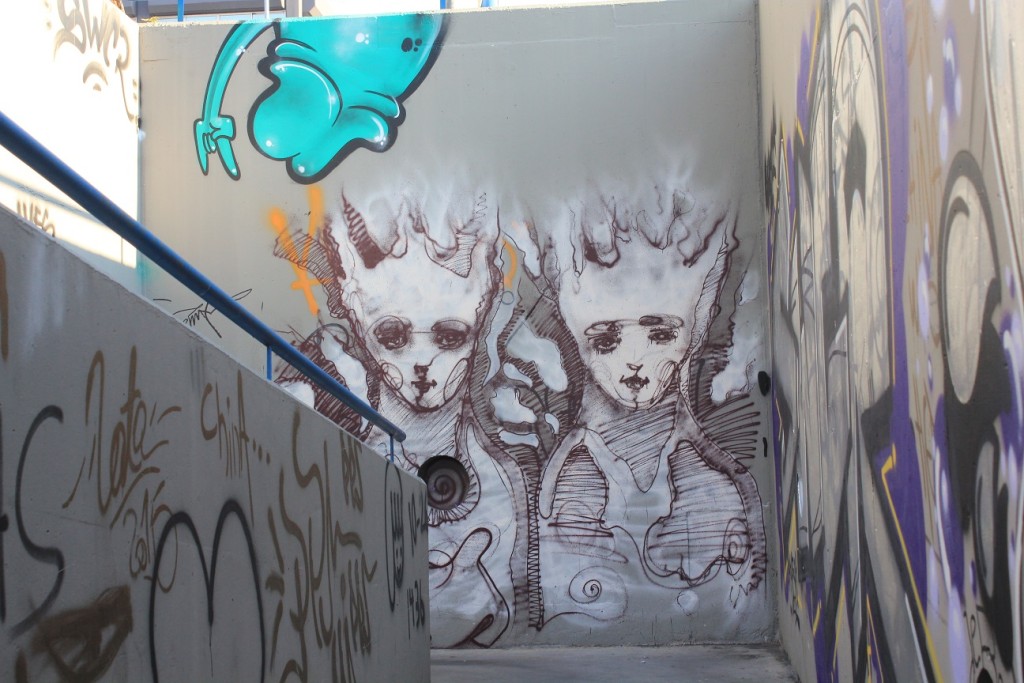 After breakfast we walked north up Syngrou Avenue. This was early Sunday morning so most businesses were still closed and there weren’t many people around. Further up the road we came upon the Arch of Hadrian, also known as Hadrian’s Gate. The gate used to span a road that went from the centre of Athens to the eastern side of the city where the Temple of Olympian Zeus stands. Now the gate stands on the side of one of the busiest roads in Athens. 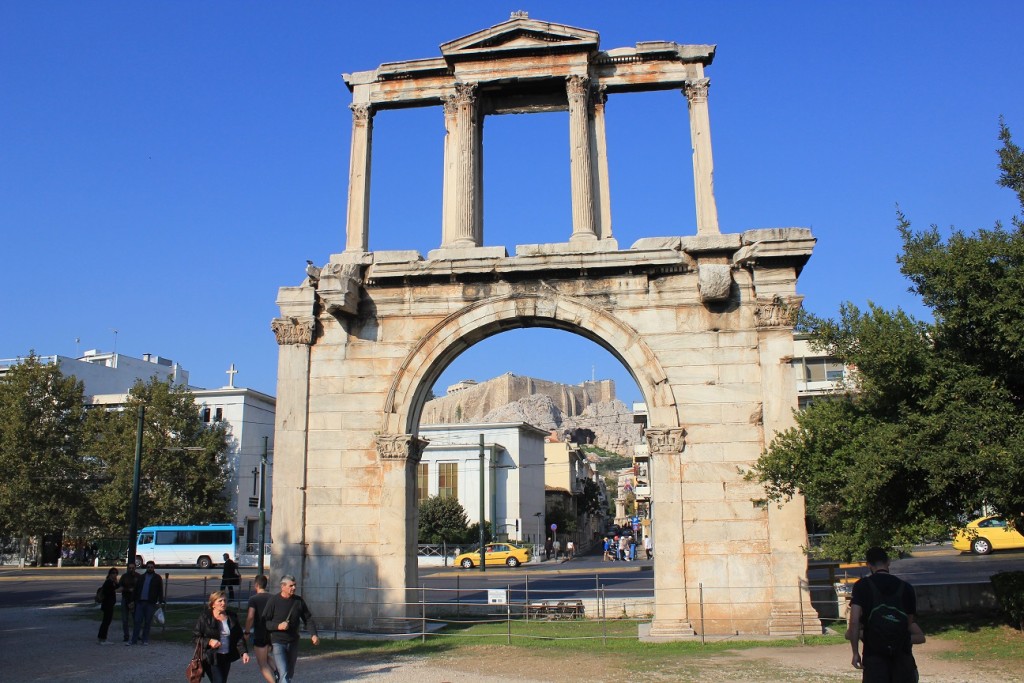 Looking through the gate, the view leads straight into the Plaka, up Lisikratous Street to the Acropolis of Athens that lays on a high rocky outcrop above the city. I will find many different views of the Acropolis from different locations all over the city in the coming weeks.

Looking the other direction, the view is of the ruins of the Temple of Olympian Zeus. Building of this temple, dedicated to Zeus, king of the Olympian gods, began in the 6th century BC but wasn’t completed until 638 years later by the Roman Emperor Hadrian. During the next century, it was pillaged during a barbarian invasion which lead to it’s reduction to ruins. After the fall of the Roman Empire, it was ransacked for building materials for other projects around the city. I guess we’re just lucky that there is still this much remaining. 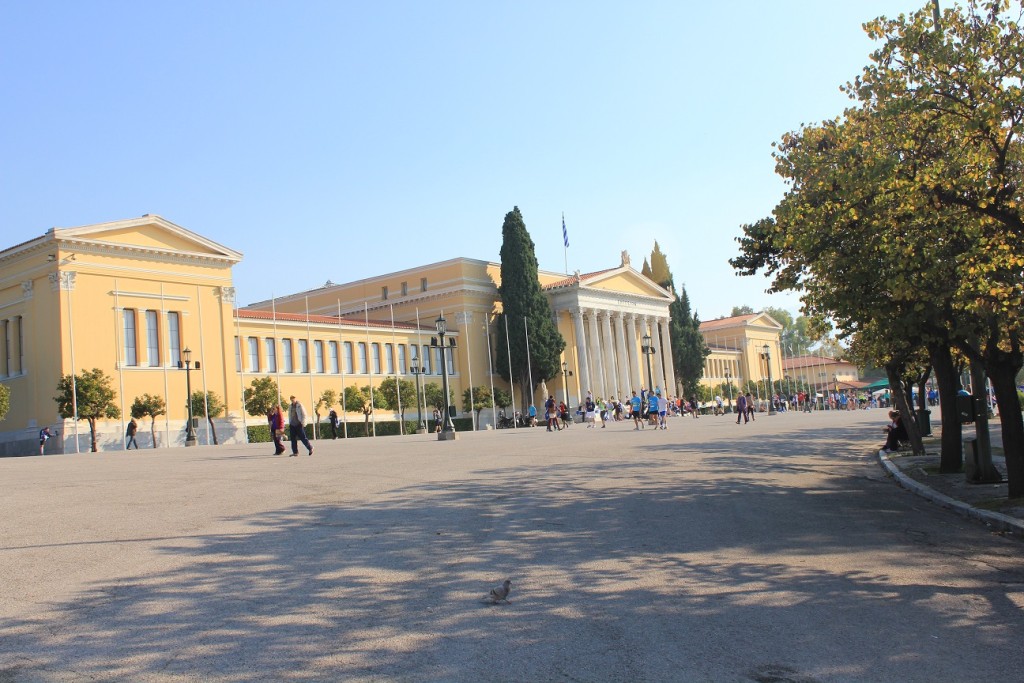 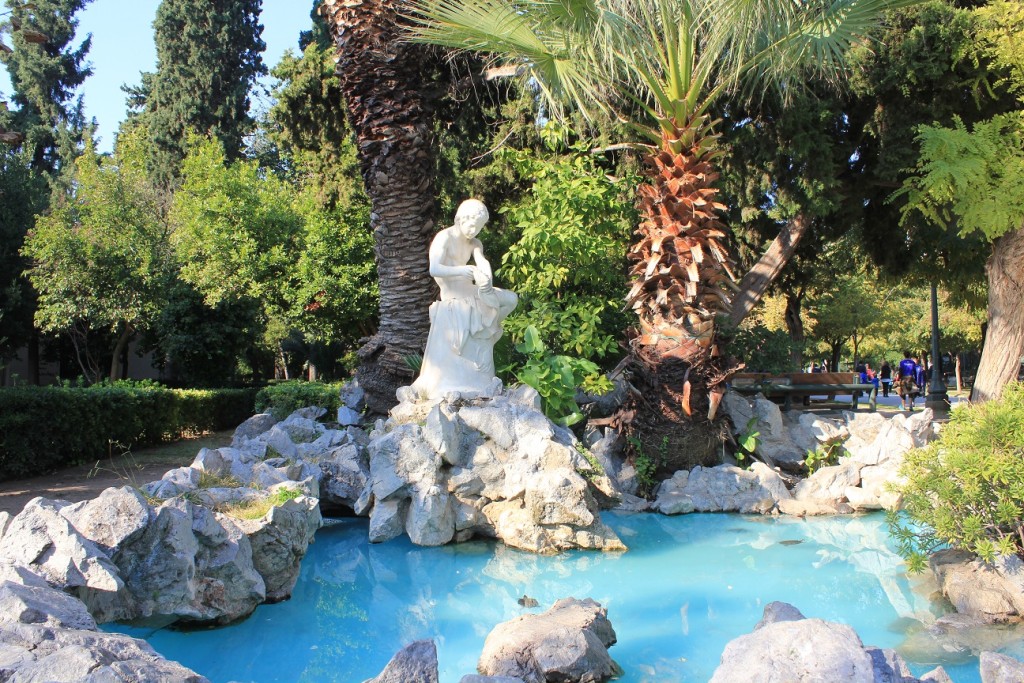 Just north of here, we entered the National Gardens where we encountered a slew of runners. Turns out today was the Athens Classic Marathon, which in the world of running is the great, great, great, granddaddy of marathons. The course is based on the Greek myth about a messenger, Pheidippides, who ran all the way from the Battle of Marathon to Athens, in full armour, to announce that the Greeks had beaten back the Persians. In the 1896 Olympics, the first Marathon race was held, then in 1972, the first Athens Classic Marathon was held. This year, there were 43,000 competitors, of which 16,000 were for the 42km full marathon. 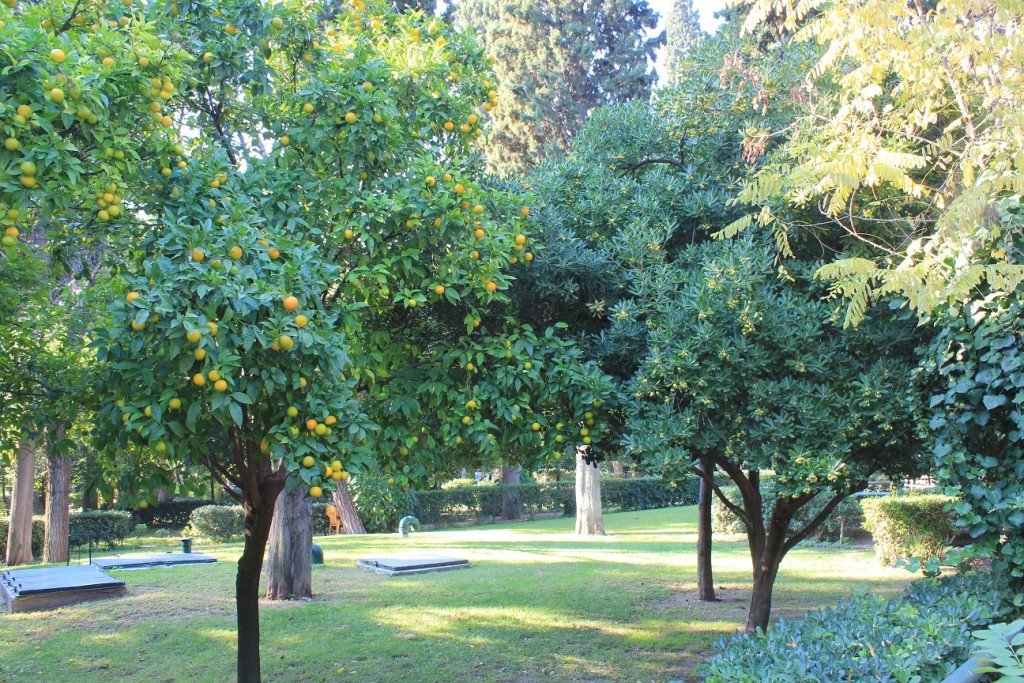 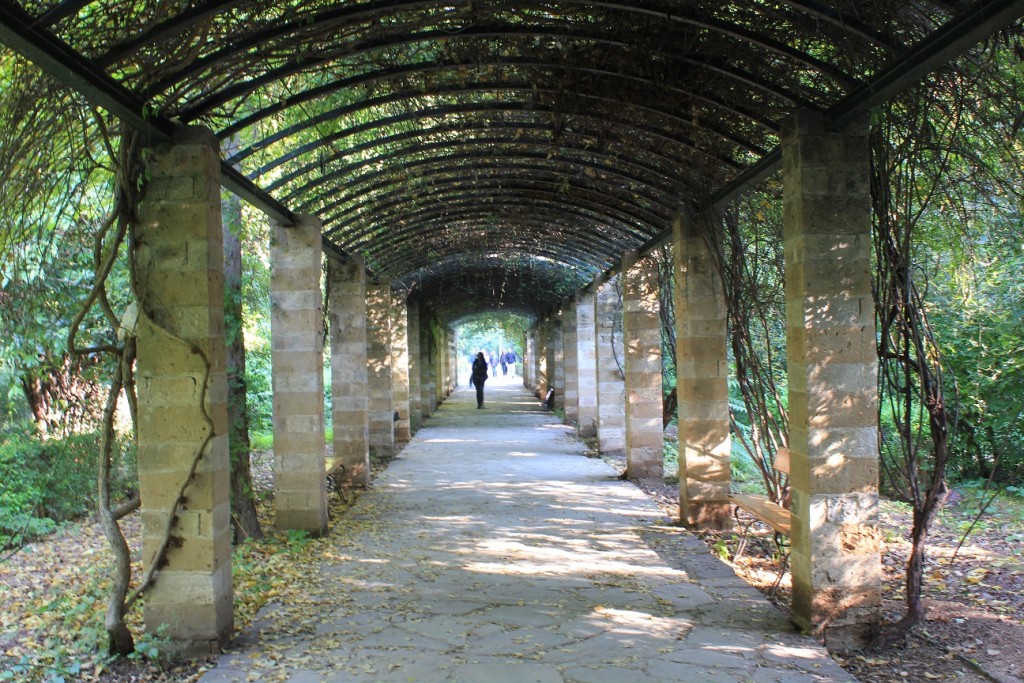 We wandered east, then north through the gardens which took us out to the Tomb of the Unknown Soldier at Syntagma Square guarded by the Presidential Guard. Behind the tomb is the 19th century Old Royal Palace, where the Greek Parliament has been since 1934. Every hour, on the hour, there is a changing of the guard ceremony, with an extended ceremony in full ceremonial dress on Sundays at 11am. And would you look at that? It was 10:30 am so we were almost right on time, almost as if I’d planned that. 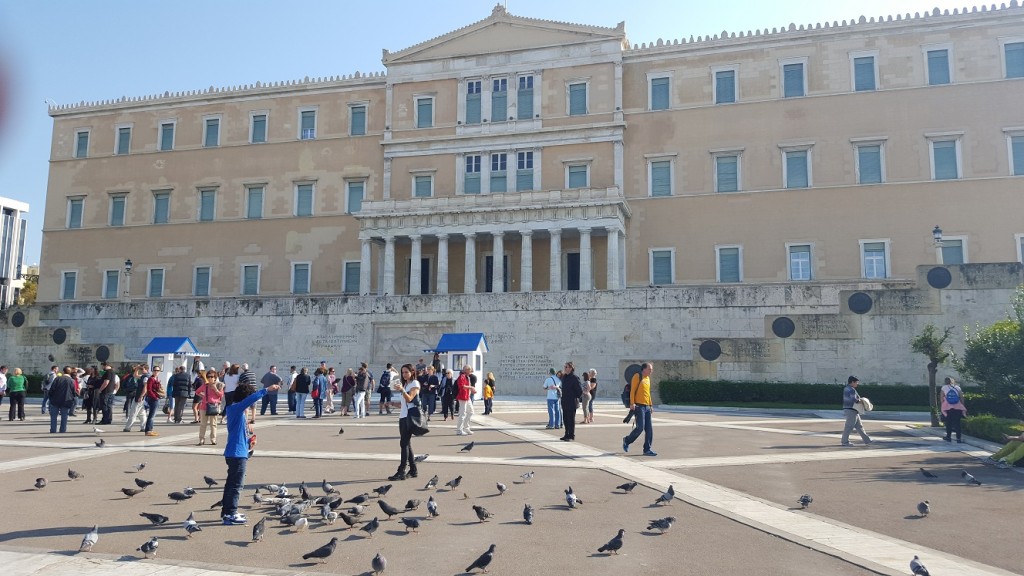 The crowd was small at first and built up as we got closer to the start time. People waited their turn to stand beside one of the guards for a photo. Other than when they are changing, the soldiers stay completely silent and unmoving. If anyone touches them or does something inappropriate, they slam their rifle butts on the ground, and a third soldier, dressed in khaki chases the offender off. 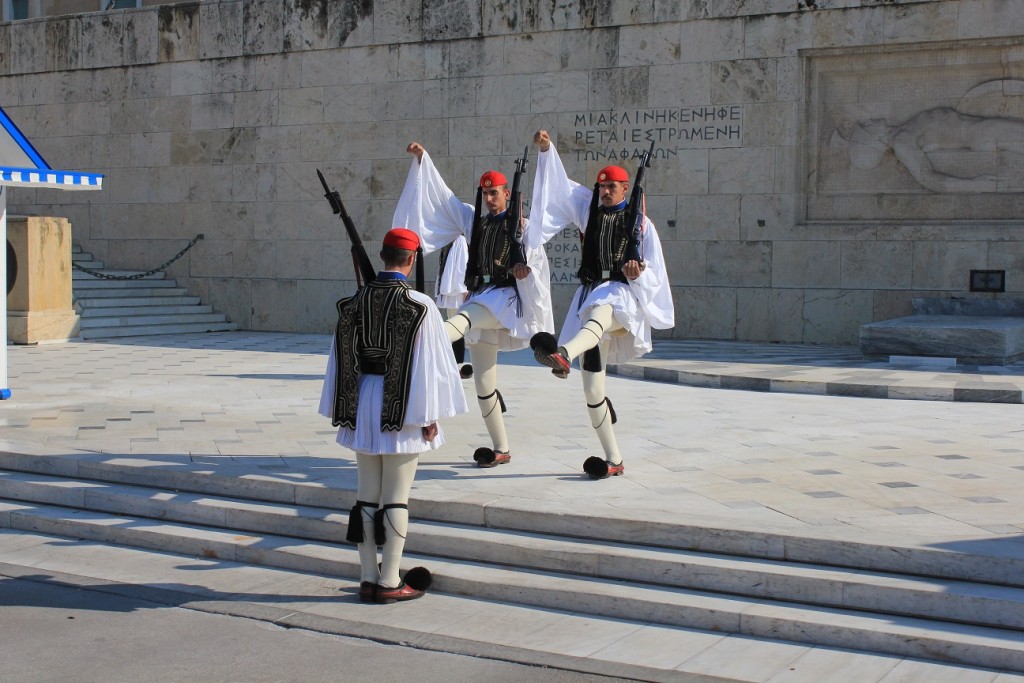 Before 11 came, the two soldiers began a slow march with exaggerated arm and leg motions towards the tomb where they eventually came to rest. Right at 11am, 3 new guard members marched up right through the crowd and stopped in front of the tomb where they were inspected and corrected, before two of them began their own exaggerated march, first joining, then replacing the former guard, who were then marched off with the third member. 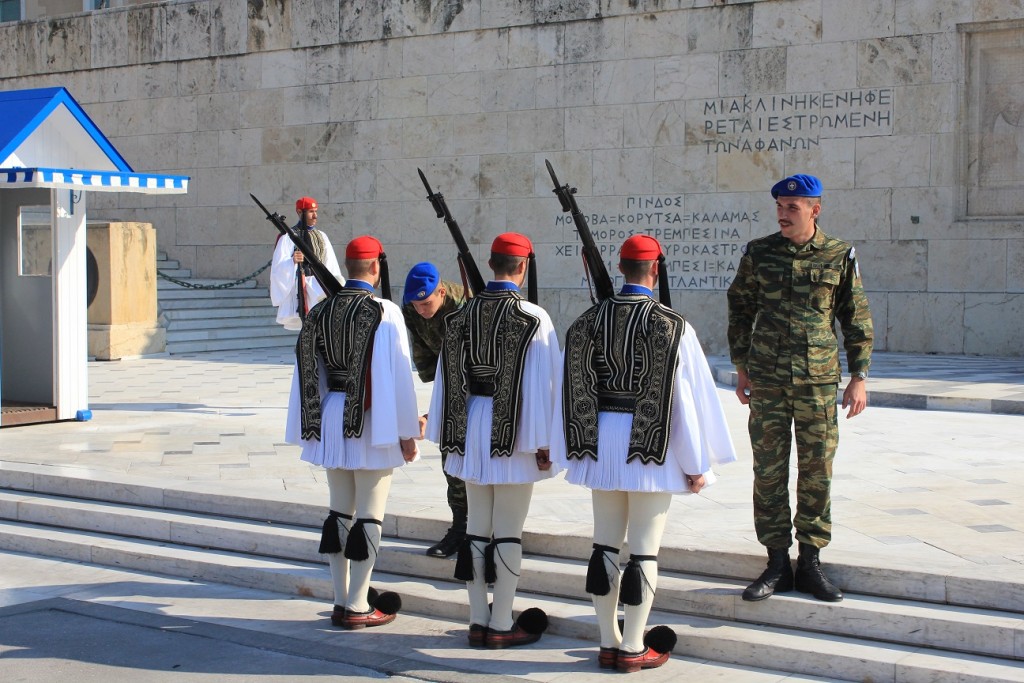 While all this was going on, I noticed two men who struck me as strange. I noticed they had walked up to the square together, where they then split up and worked their way into the crowd. The one who moved in by me had his arms inside his jacket and he scanned the crowd, as if looking for a mark. I moved myself back a few paces, to be out of his reach, and watch both of the men, to make sure they didn’t try anything. I don’t know if I misjudged them, if they were so good I missed them pickpocketing someone, or if they didn’t find a good mark, but I didn’t see them do anything. 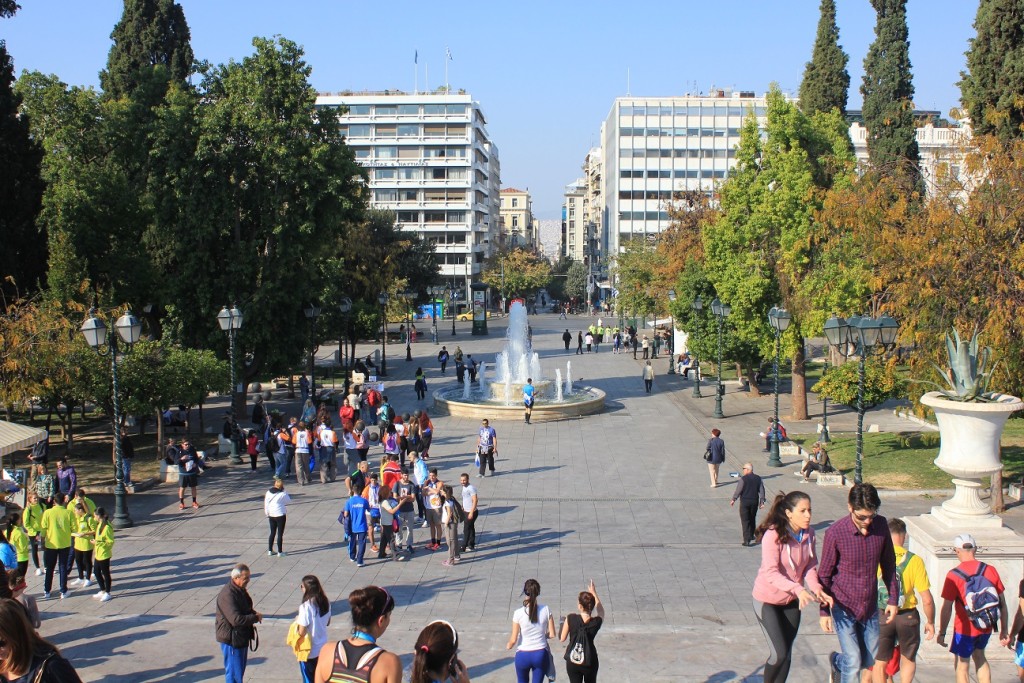 From there, we walked across the street, to Syntagma Square, the central square of Athens, named after the Constitution that the first King of Greece signed after an uprising in 1843. This square is a park like setting with grass, trees, a fountain, and two restaurants. People gather here at all hours of the day and night, and it is a hive of motion. 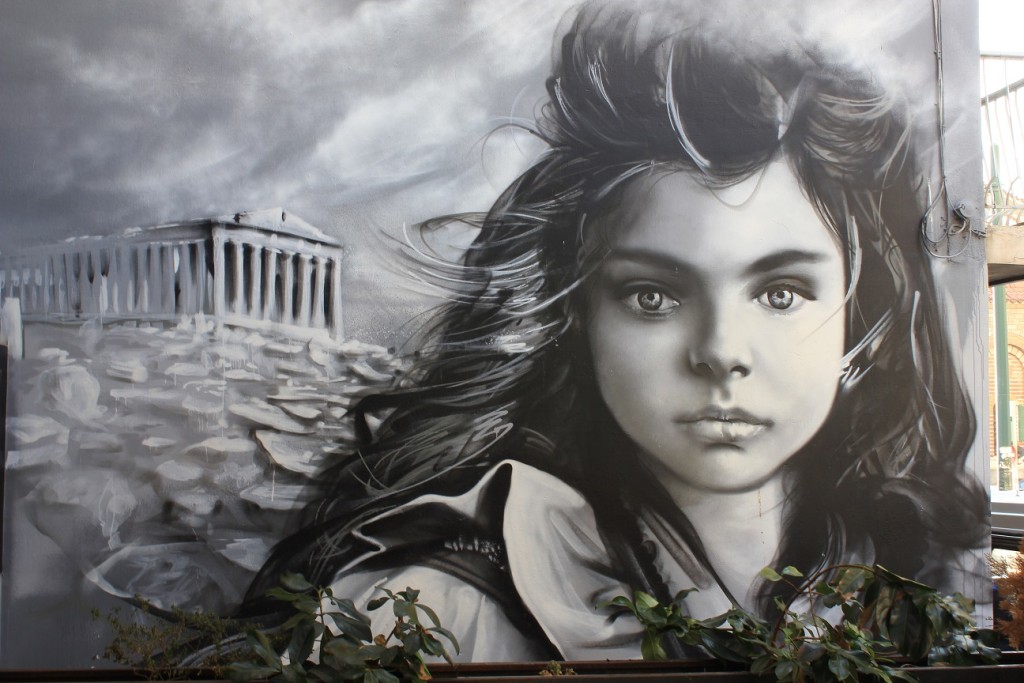 Looking west down the steps and past the fountain, you see the start of Ermou street, a pedestrian mall flanked by big international stores such as Nike, Sephora, Benneton, Marks & Spencer,  H&M, and Zara. It is in the top  five most expensive shopping streets in Europe, and the tenth most expensive retail street in the world. I will go in some of these stores later on in the week, but for now we turn south and head into the Plaka. 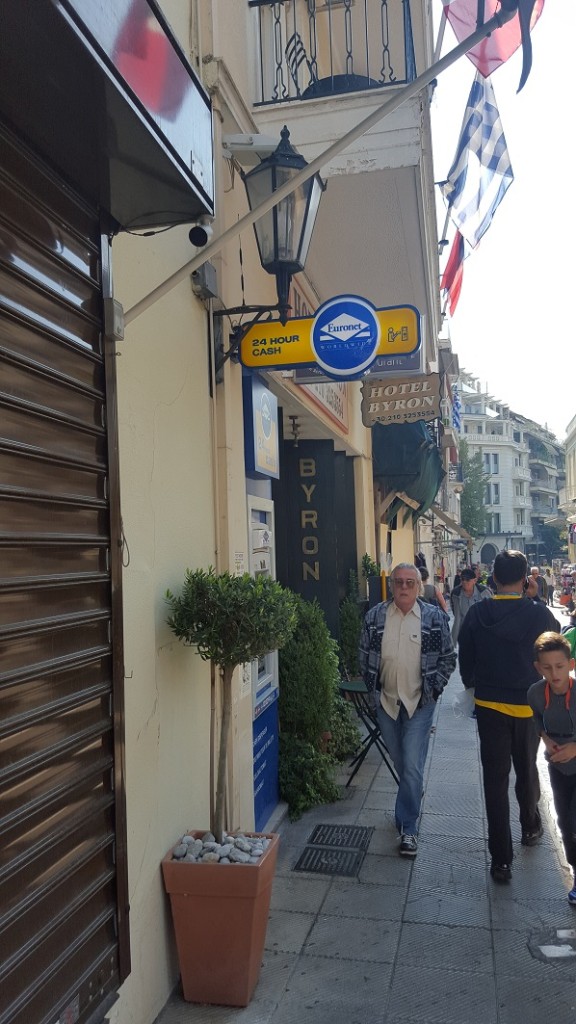 Euronet is the company Harold works for. Their ATMS are located all over the Plaka.

The Plaka is the old historical neighbourhood of Athens, that borders along and under the north and eastern sides of the Acropolis. The streets wind around in a confusing array that will take me some time to get the hang of. In the coming weeks, I will find myself discovering new places in there time and time again and it will only be in the last week that I truly get a full understanding of the shortcuts and locations of places I saw previously. 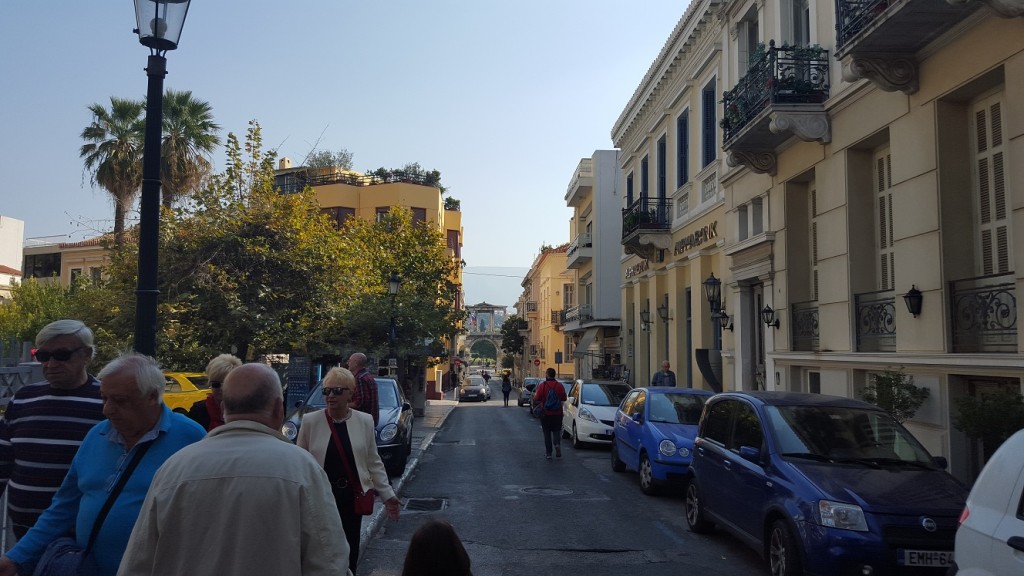 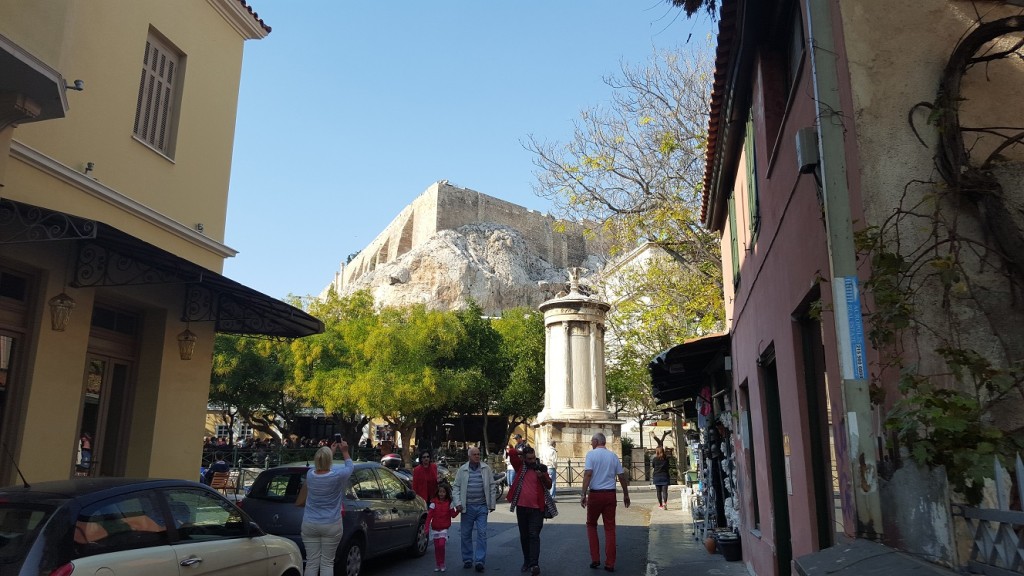 The streets here are so very narrow, you’d think only pedestrians would be able to make it down them, but Greeks don’t let much stop them from driving or parking where they need to be, and they all drive such tiny cars, they are able to get into the tiniest of alleys and walkways. 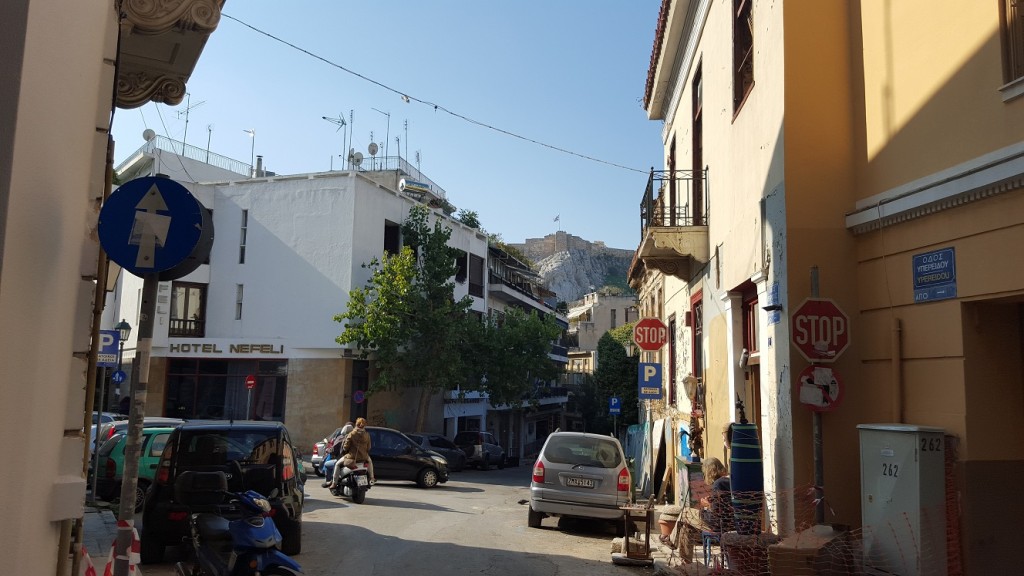 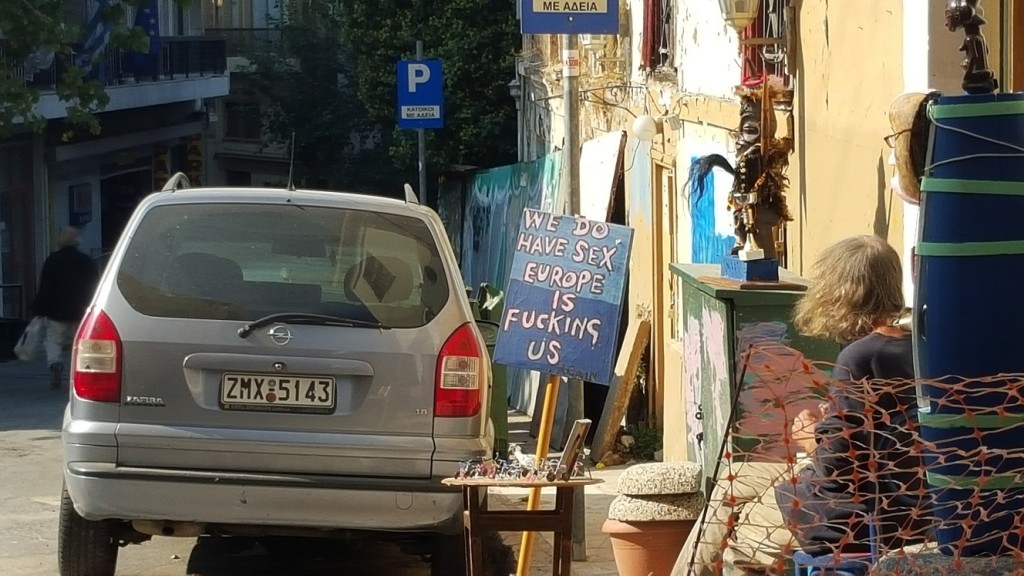 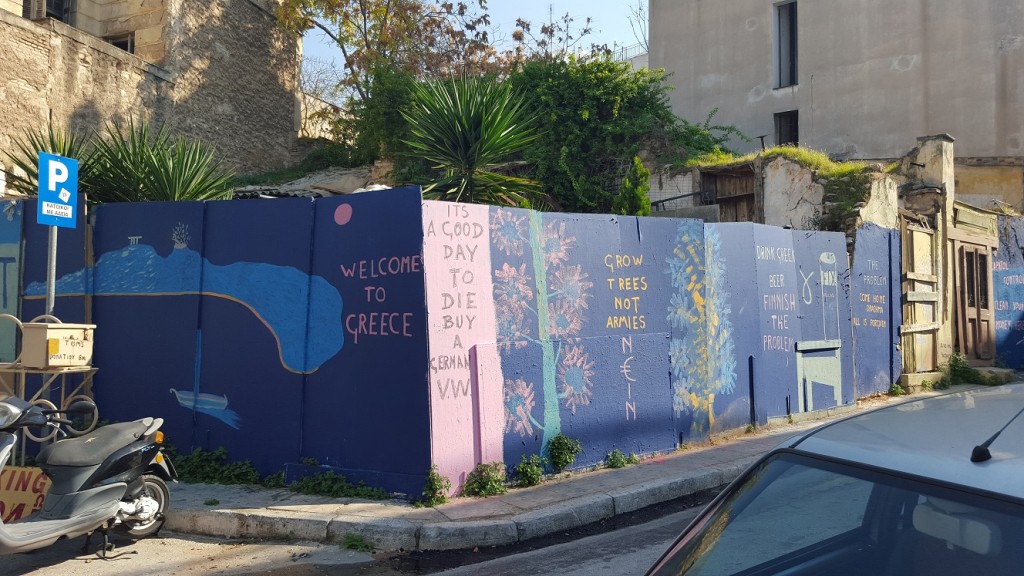 Along the way we came across a small Irish man who had plenty to tell us about the corruption of the Greek system and politicians and how the populace has been taken advantage of. He has lived here, on this corner for 23 years and has seen many things change. He spends his time creating little knickknacks to sell to tourists and painting the outside walls in the area with political messages against the EU. He was a lot of fun to talk to and gave me my first taste of what is happening here, politically. 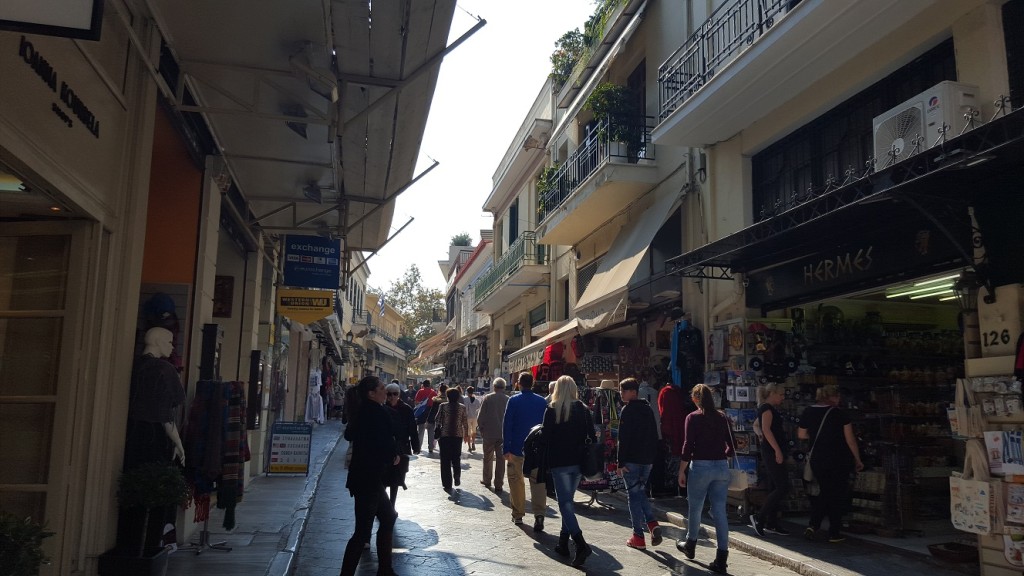 The Plaka is colourful and interesting to wander through. It is a tourist mecca with a ton of restaurants, sidewalk eateries, and shops. Near the southeast end, we came out to an open area that crosses Dionysiou Areopagitou, the brick road that wanders up towards the Acropolis entry. 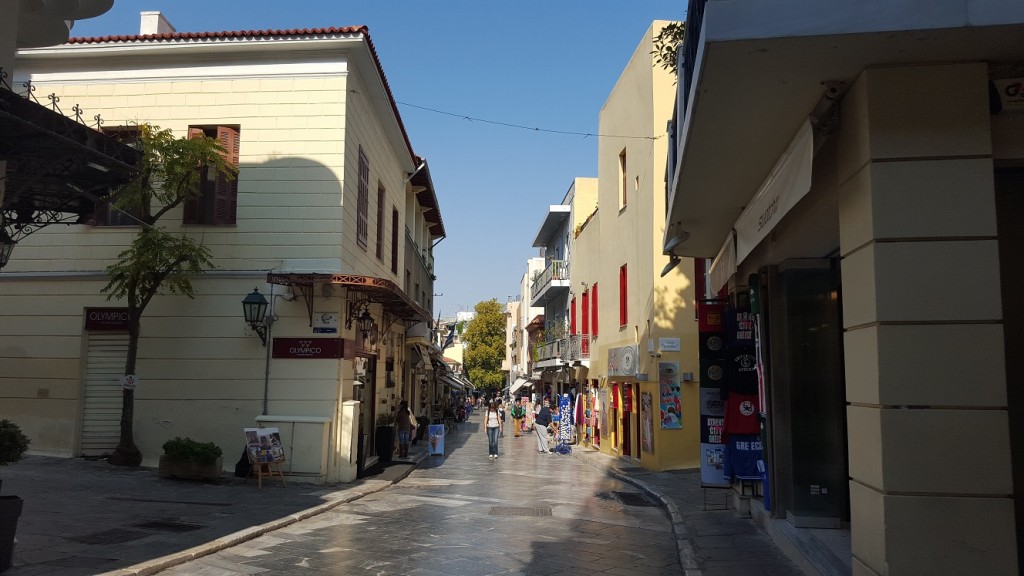 Instead of going that way, we went south, our first foray into what I later nicknamed “The Restaurant Gauntlet”. It is a main walking street that leads from the Plaka,and down into the southern neighbourhoods that lead back to our hotel. The east side of the street is lined with nothing but sidewalk eateries with aggressive employees who try to wrangle you into their restaurant. As we’ve found in other places, the more aggressive the wrangler, the less likely the food will be good. This will be our only day we will sit down here, because the food was bland and tasteless. 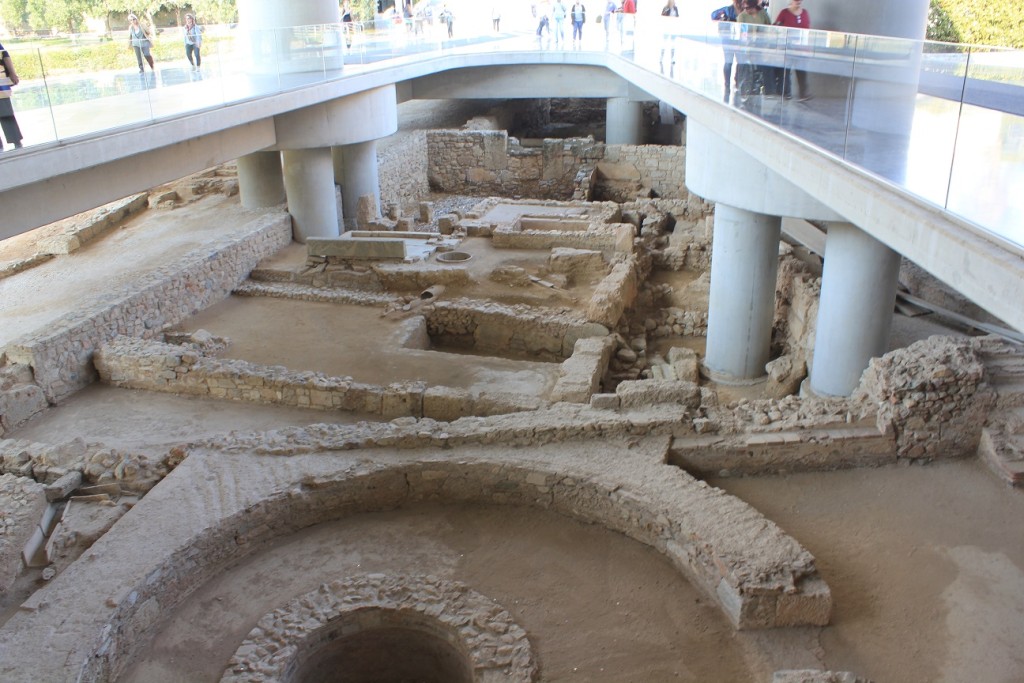 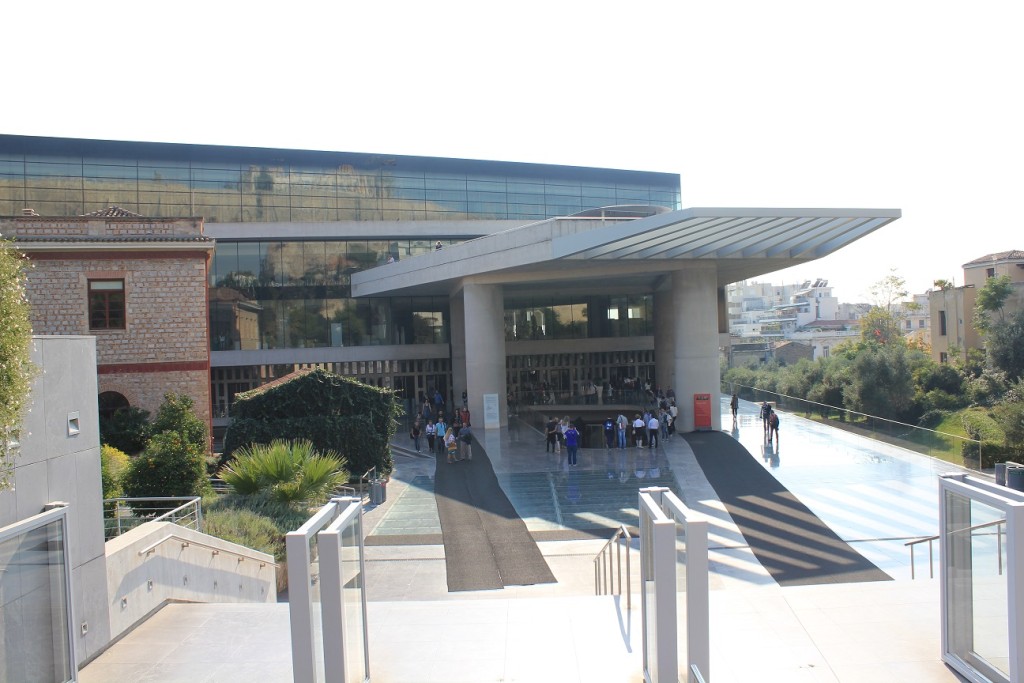 After lunch, we walked back out to the brick road and headed to the Acropolis Museum. Harold remembered this was being built the last time he visited Athens, years ago. Only 5 Euro to get in, it was the perfect size and a very enjoyable and not overwhelming museum. Everything in this museum has to do with the Acropolis, which you can view at the same time, through the huge plate glass windows on the north side. While I will hear complaints about it’s design from Athenians over my time here, we found it to be very beautiful and enjoyed the design, built overtop of the ruins below, showcased by the glass floors. 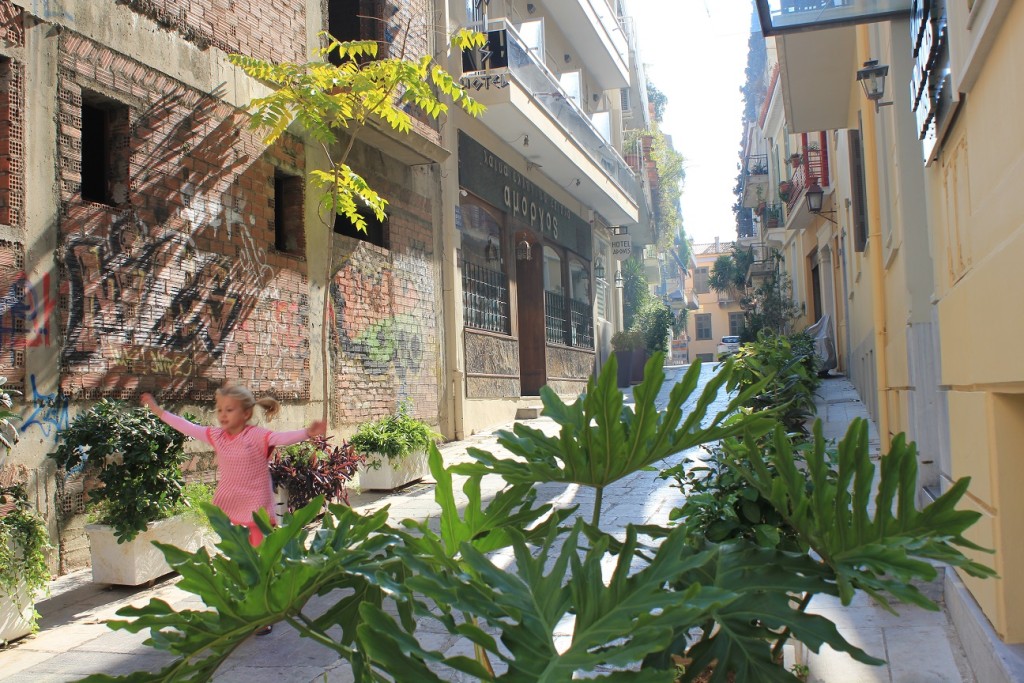 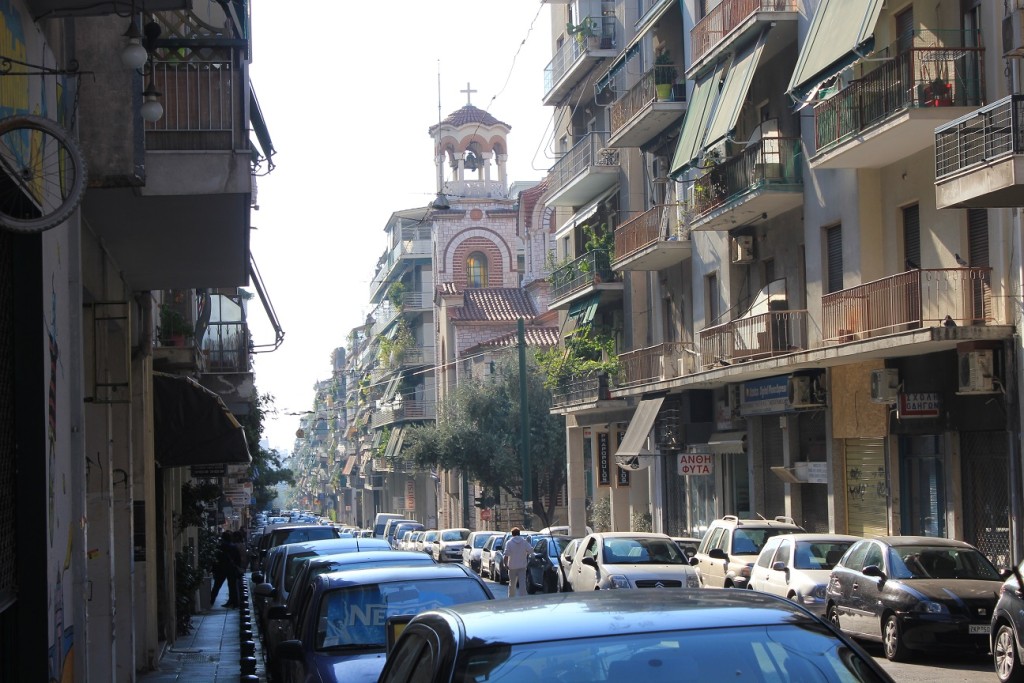 It was late afternoon by this time, and we were feeling quite tired. Usually, when we travel, we’ll have such a short time in each place that we feel forced to push through and keep going to the point of total exhaustion. It was a very nice change to feel like we have a ton of time to see things and therefore we could head back to our hotel. We picked up a couple of bottles of wine, some vegetables, olive oil and balsamic to take back to the room for later. 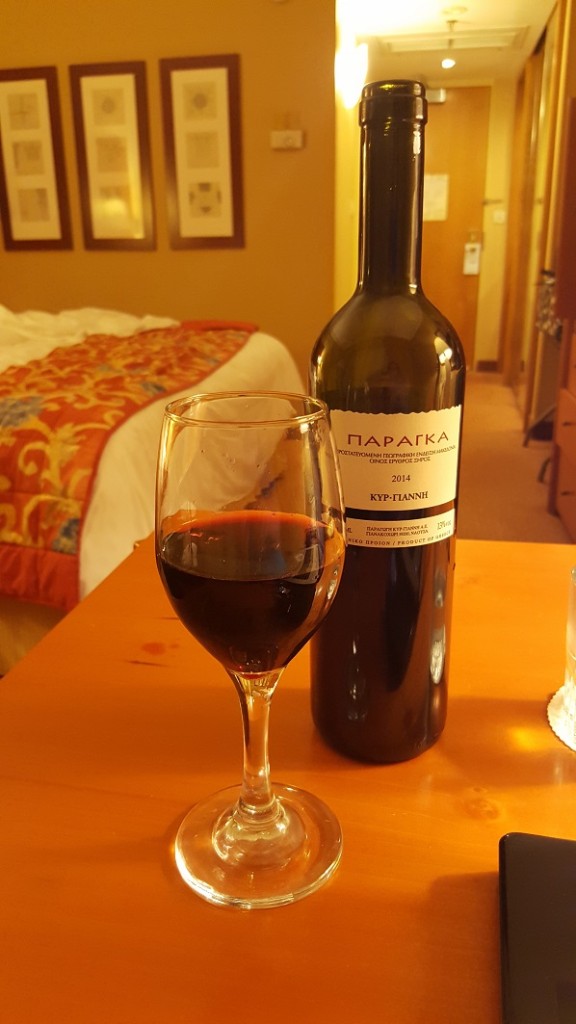