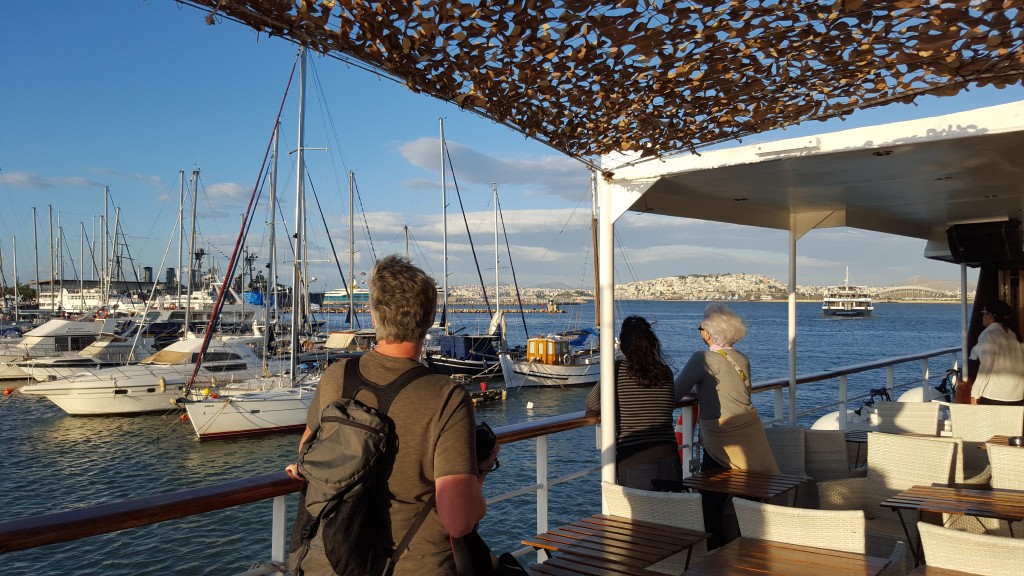 “You must be Canadian.” the woman accused me.

“Yes. How did you know?” I countered.

“Your clothes.” she smiled at me, with a flourish of her hand at what I was wearing. 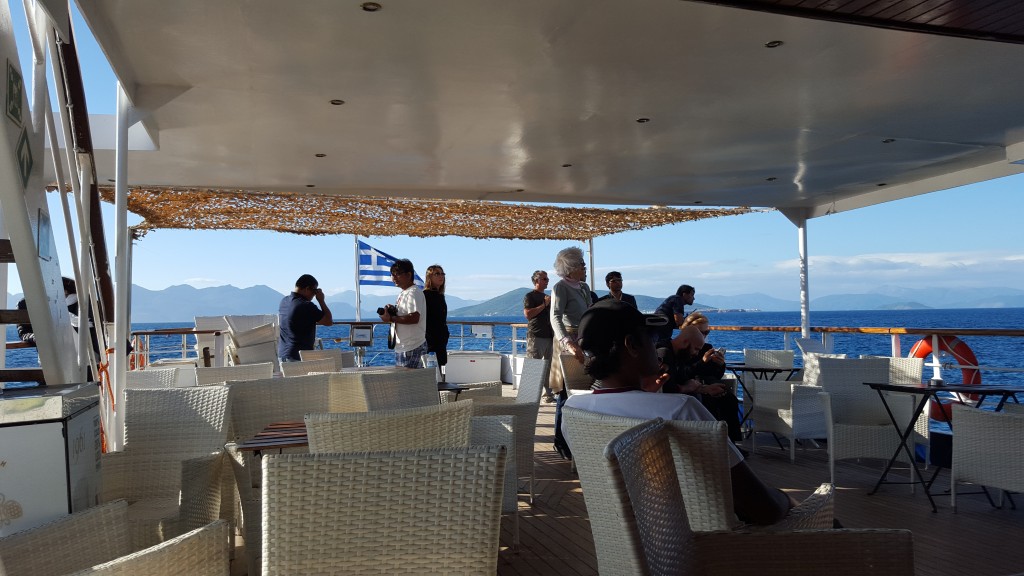 I looked down at my clothes: capris, a fuchsia t-shirt, fuchsia running shoes. Then looked at them: long pants, white down coat, a scarf. Yes, a scarf! I looked ready for a cruise in a hot climate, they looked ready to hit the ski slopes.

This wouldn’t be the first time I’d feel a little weird about my clothes here. To the Greeks, this is winter weather. They are all wearing warmer, darker clothes. I stand out, especially with the blue and turquoise streaks in my hair. 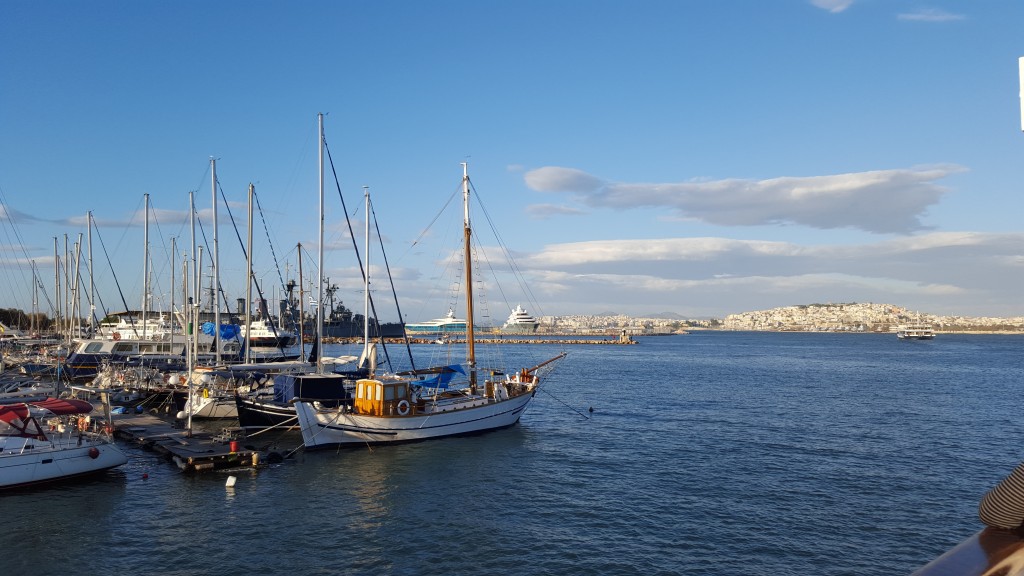 Pireaus and Salamina island in the background. 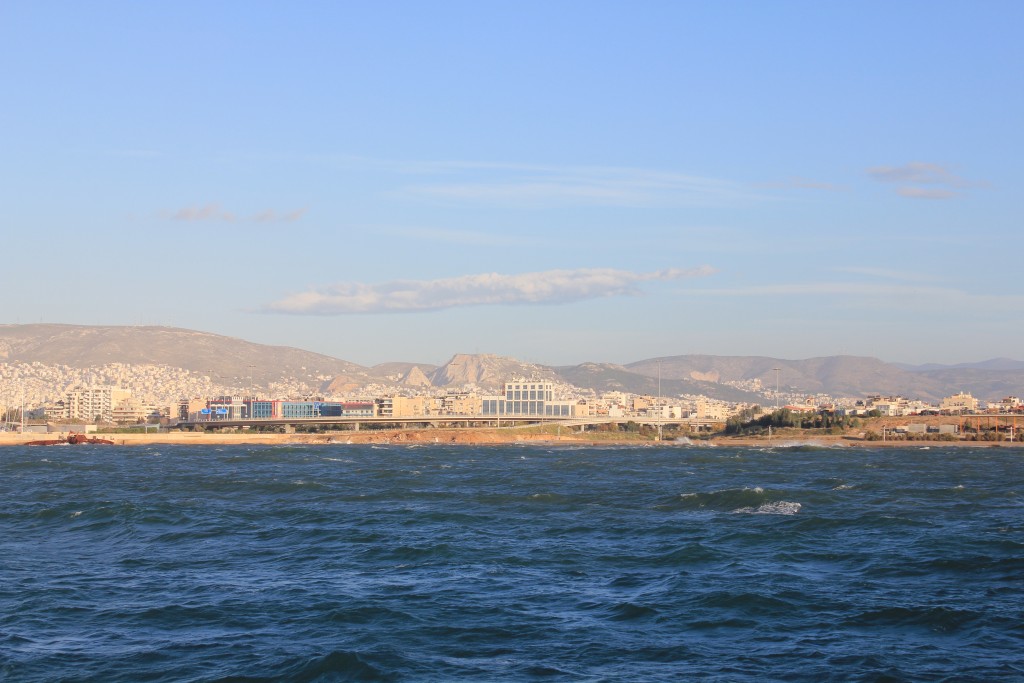 Looking back towards Athens and Harold’s office. 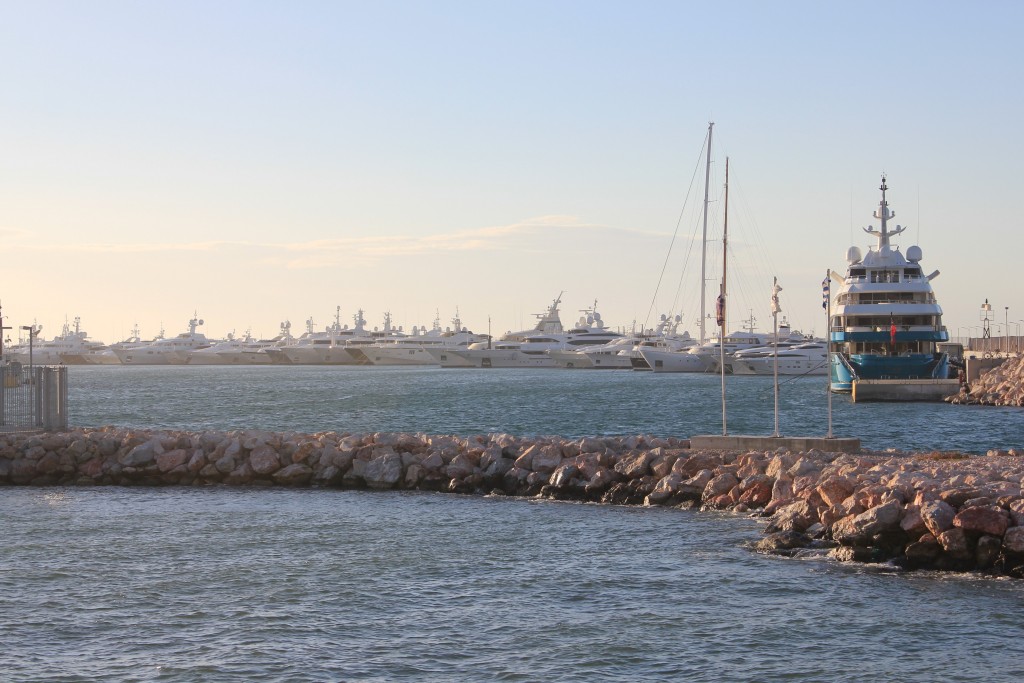 Any one of those yachts is worth a lot of money, but the turquoise is huge, huge money. 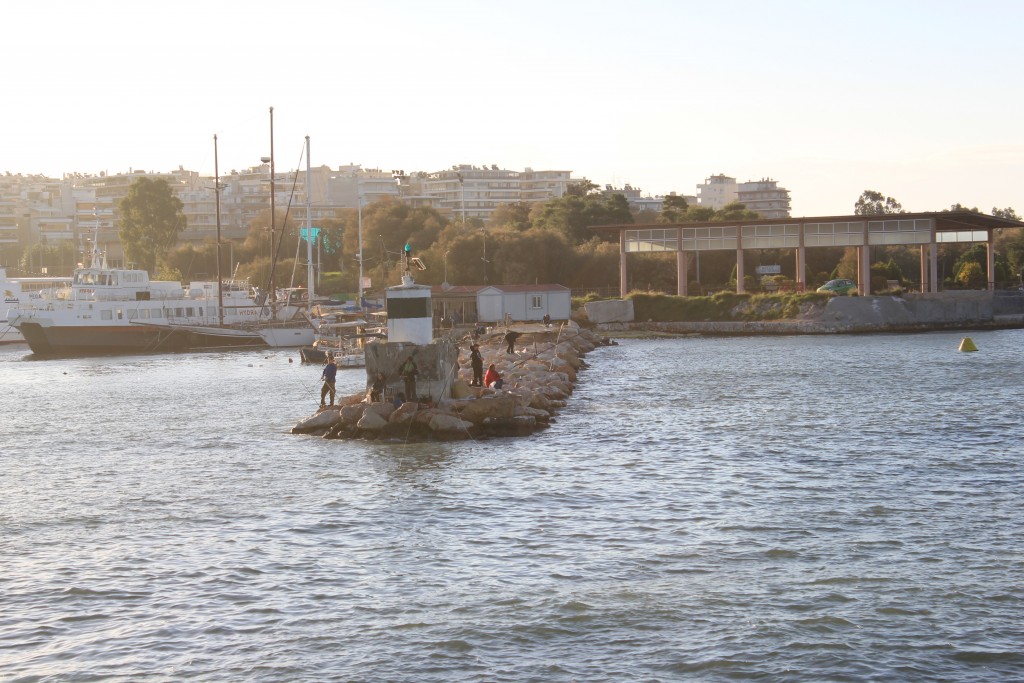 There are always a lot of people fishing along the waterfront. 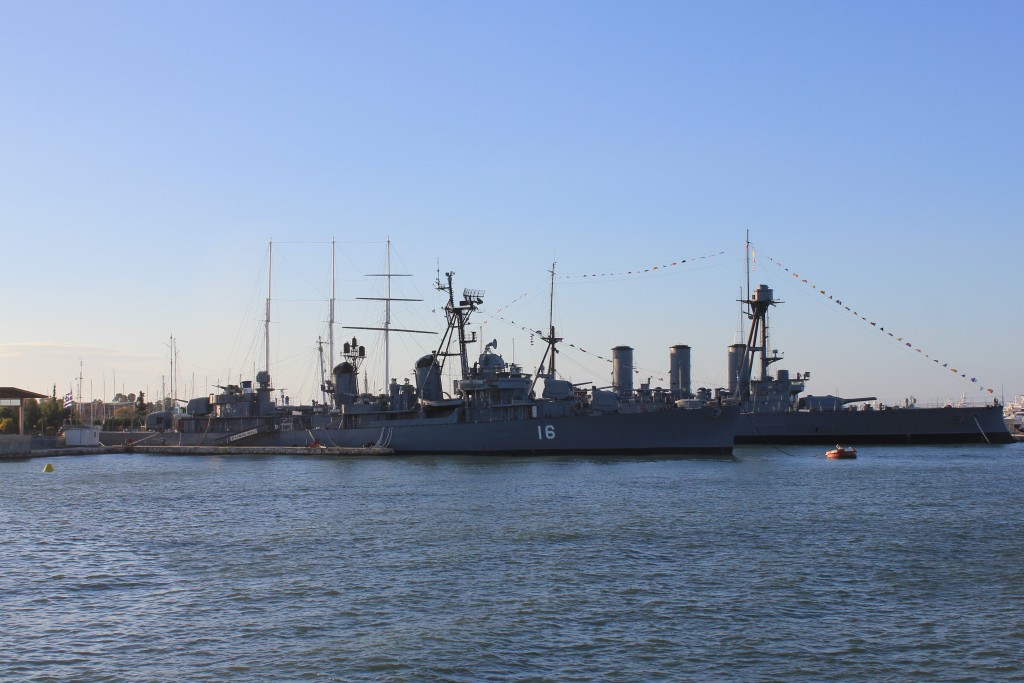 Navy ships in the bay. 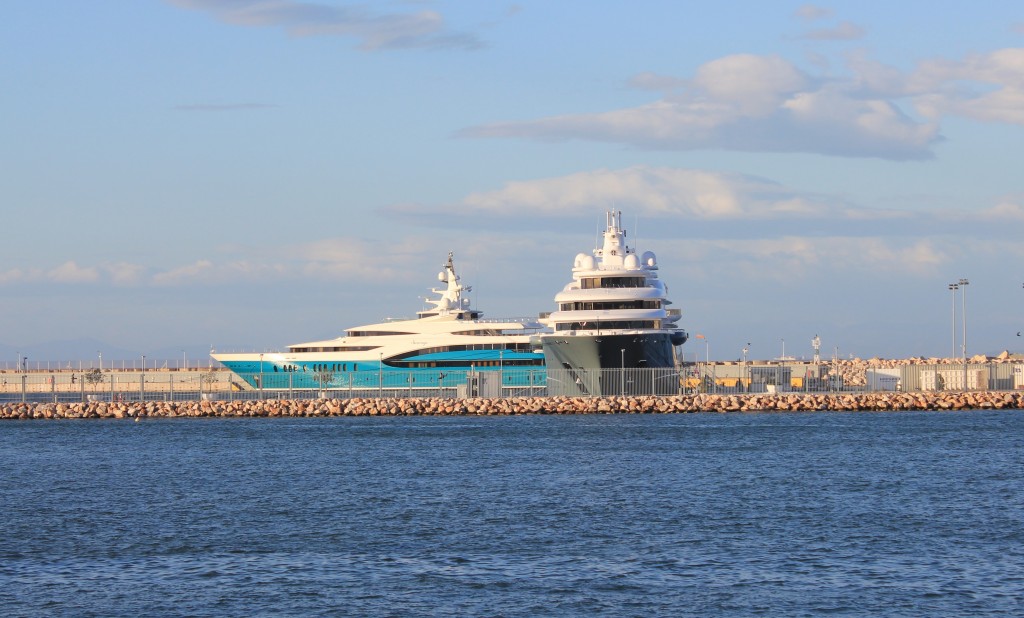 These ships are monstrous. This is how the filthy rich lives. 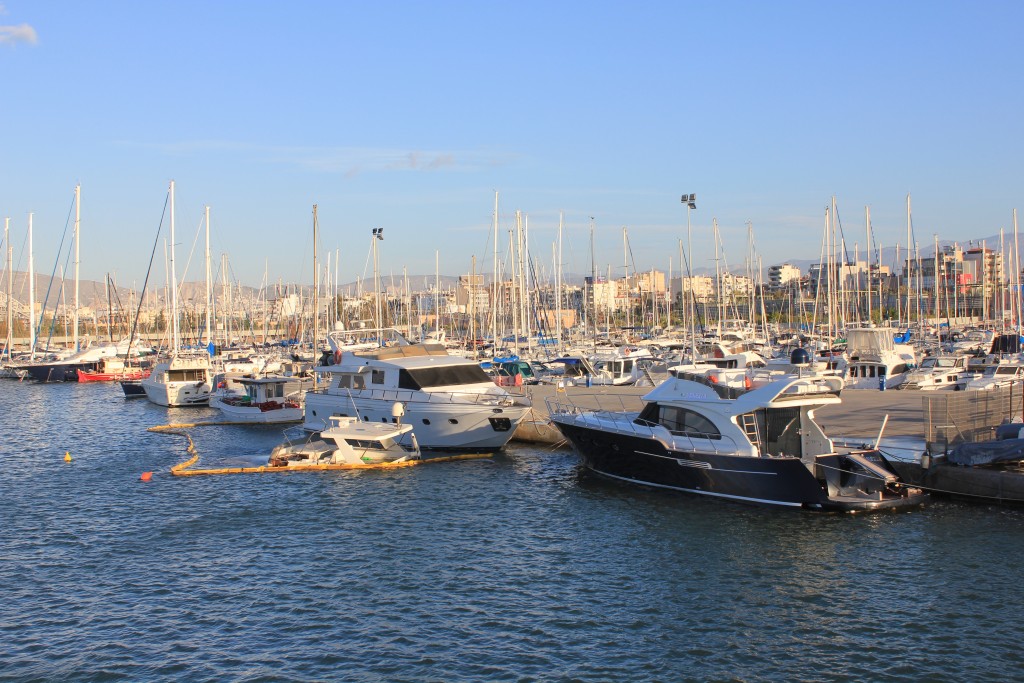 I bet we could get this boat for a huge discount! 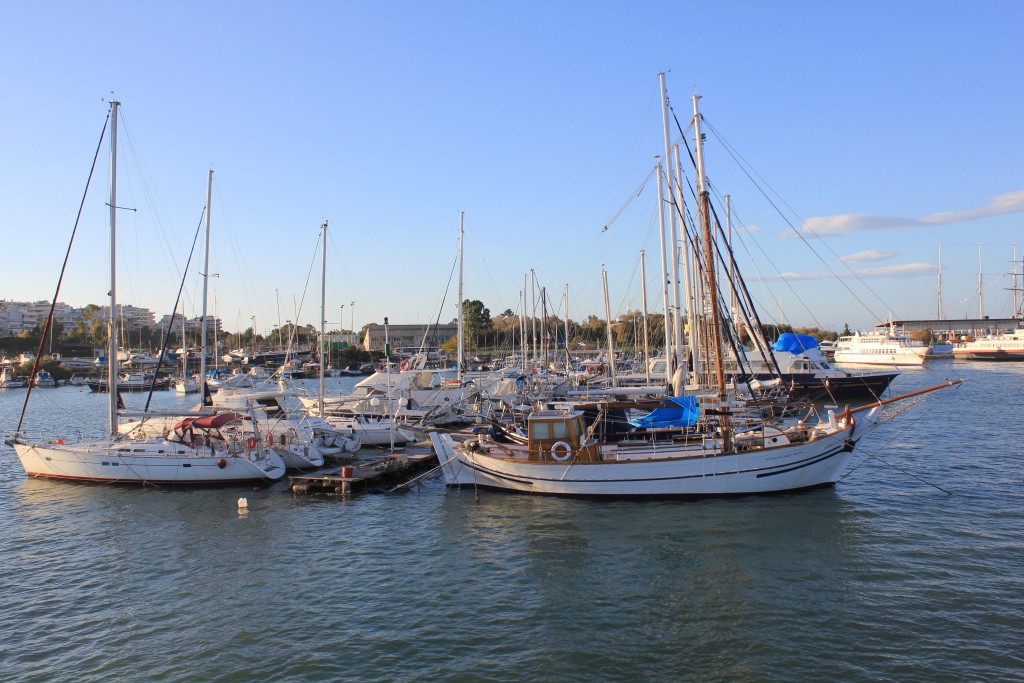 Before we settled for RVing, our plan was to buy a ship. That’s still on the wish-list. 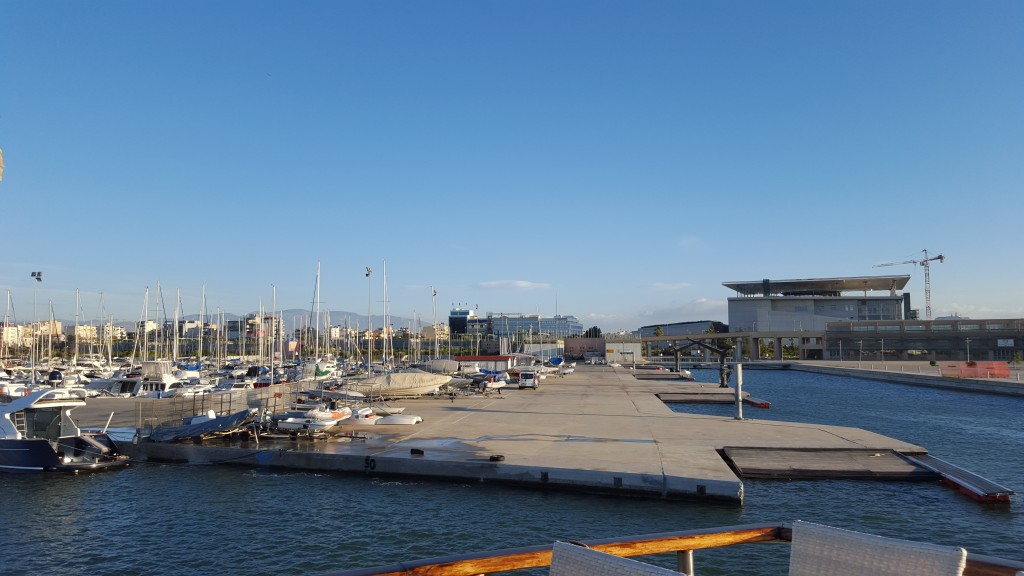 That’s Harold’s office right straight down the middle of this photo. 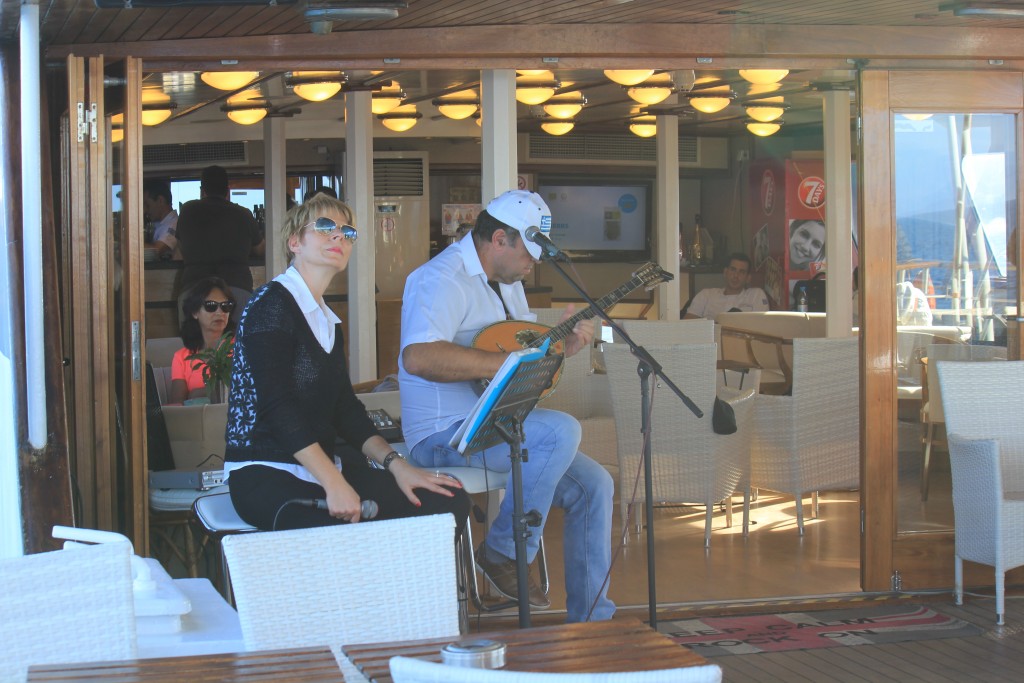 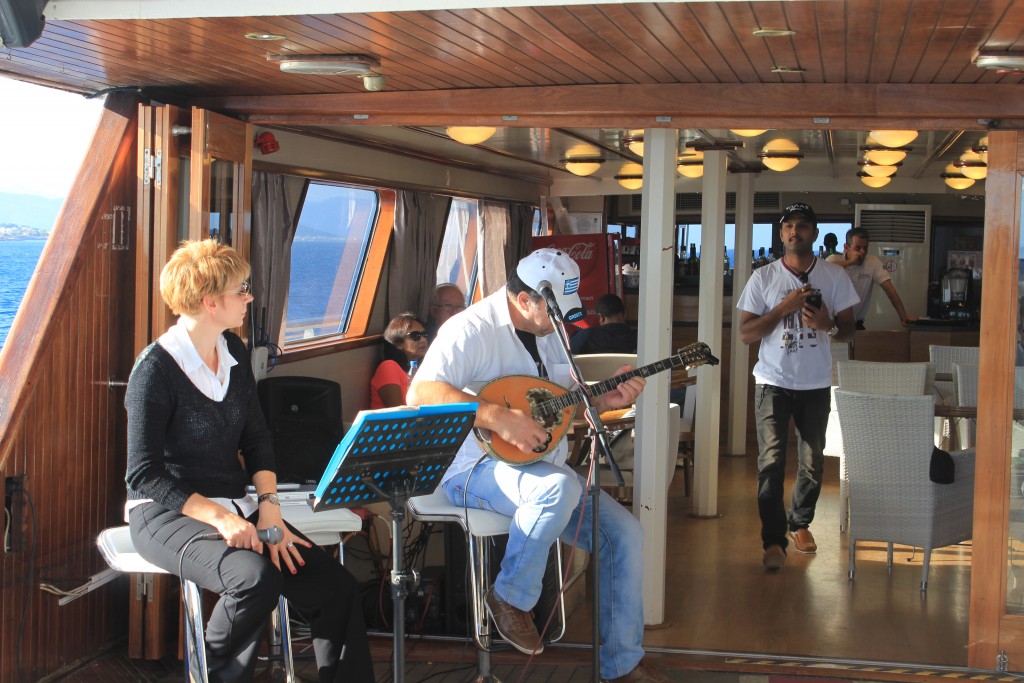 The first part of the cruise was so much fun. We had a band – well a singer and musician – playing all the standards you expect on a Greek ship. 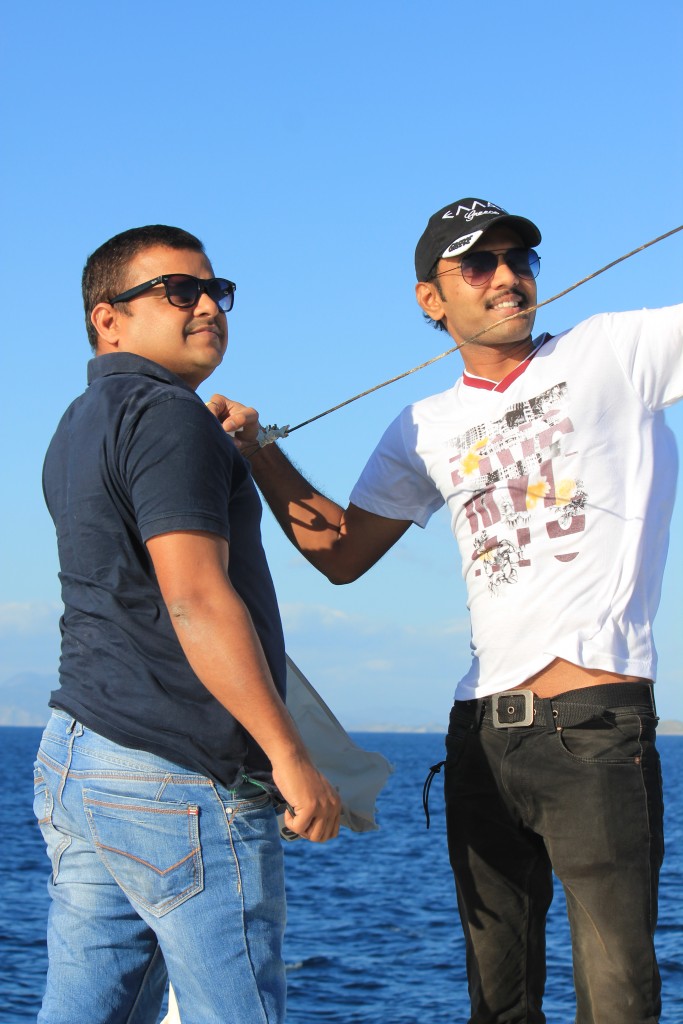 We had programmers model posing all over the ship. 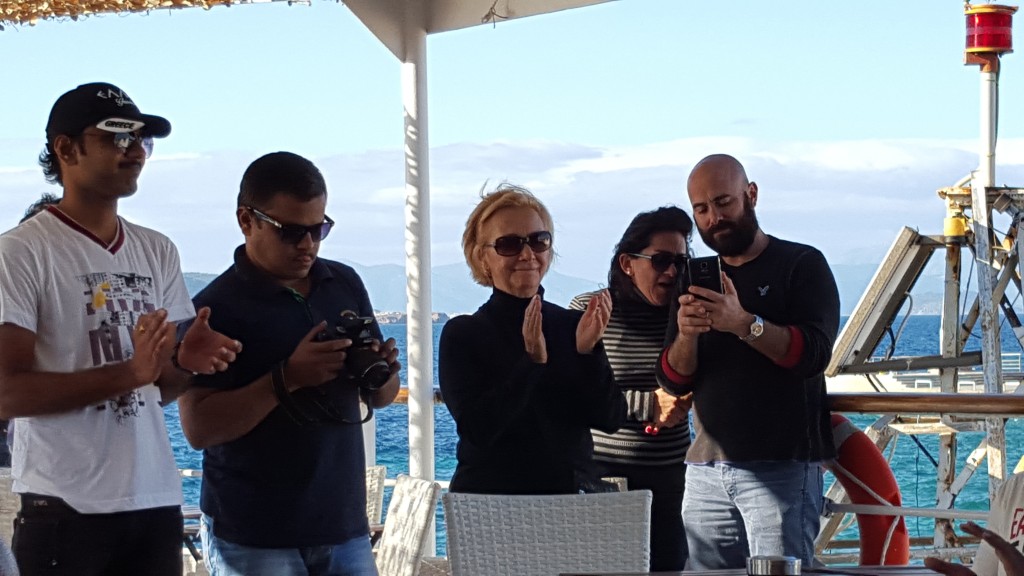 We even had Hilary Clinton on board! 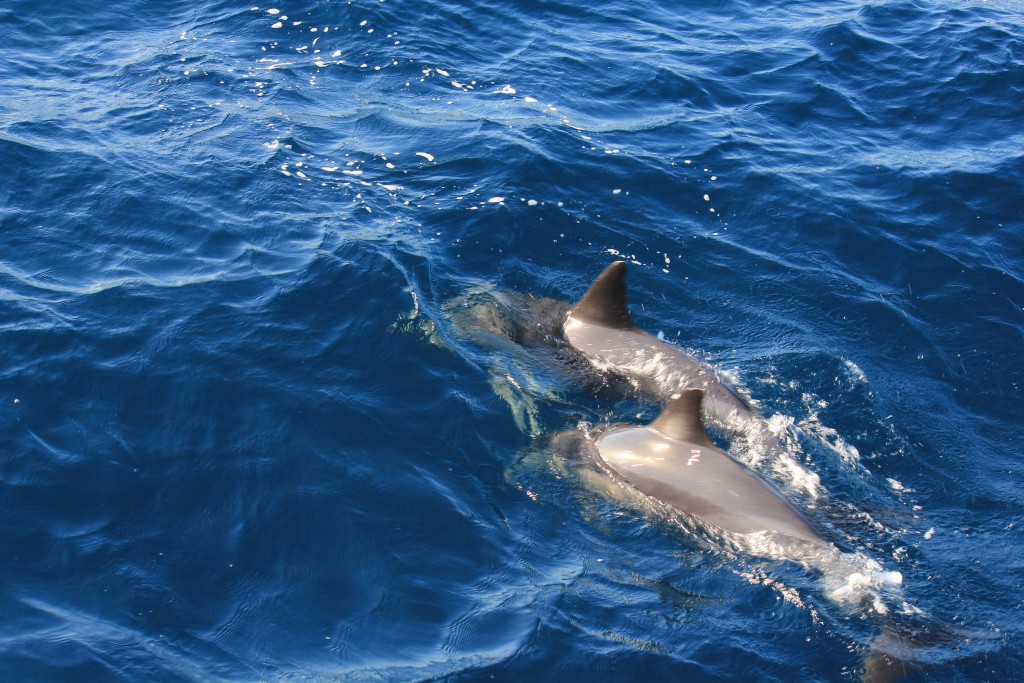 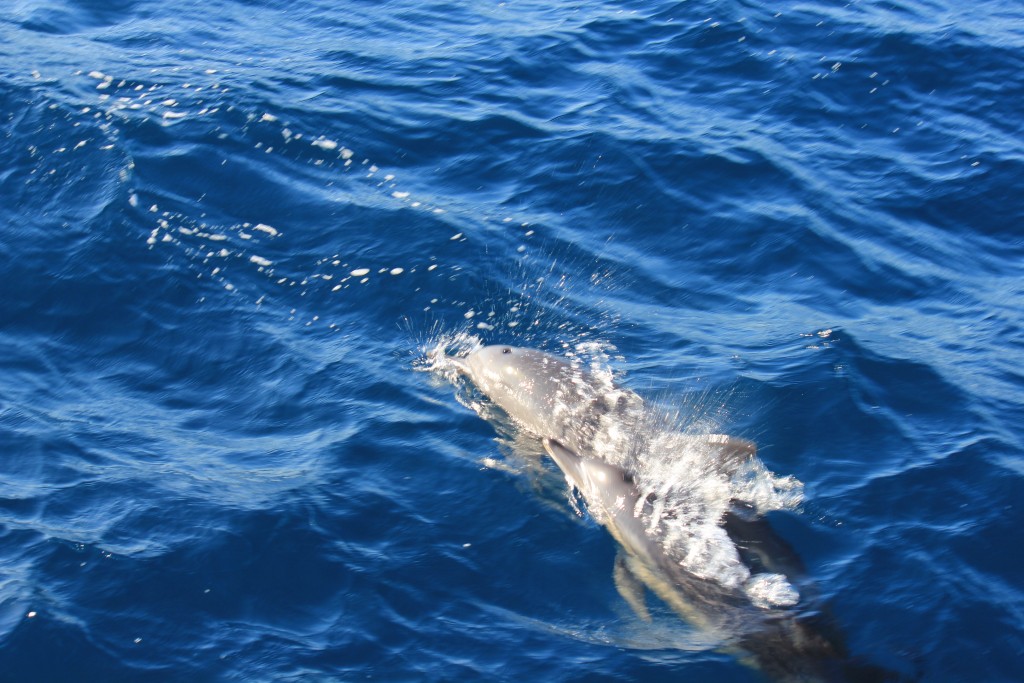 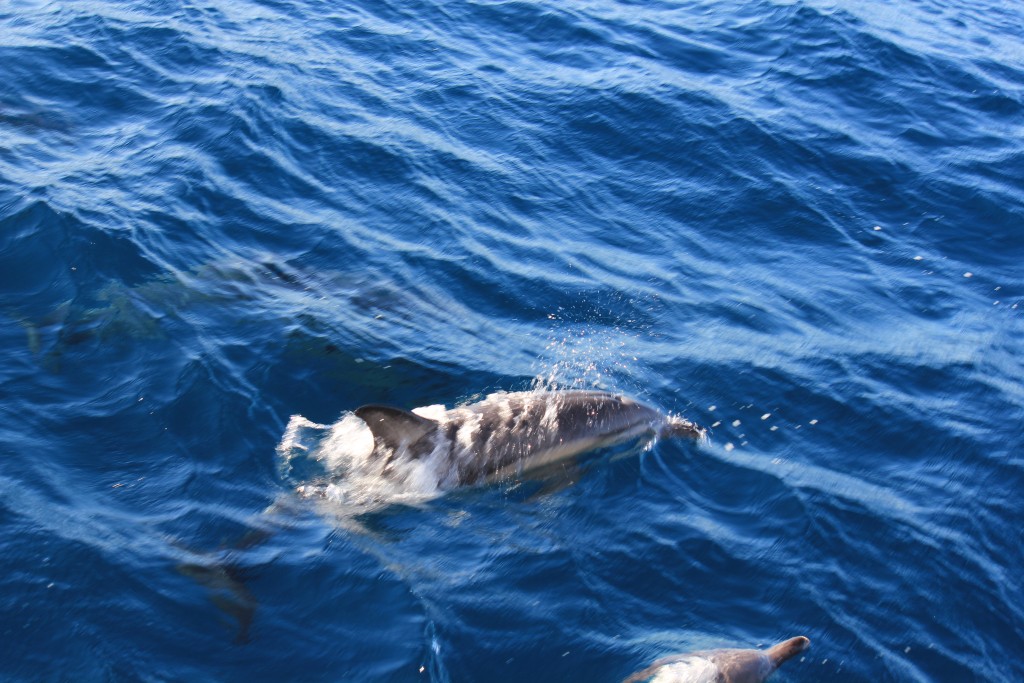 Best of all, we had dolphins swimming alongside us. We climbed up to the bow of the ship, and hung over watching them jump through the waves just feet from us. 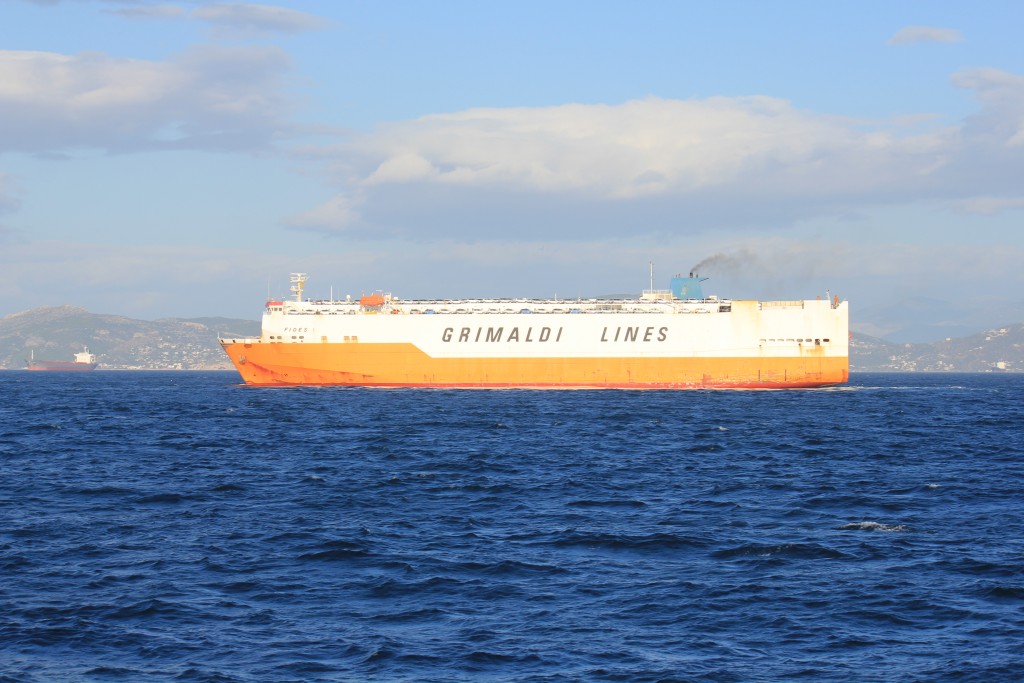 I thought maybe this was owned by the royal family Grimaldi’s of Monaco but their web site mentions a different family of Grimaldis. Perhaps a distant relative. 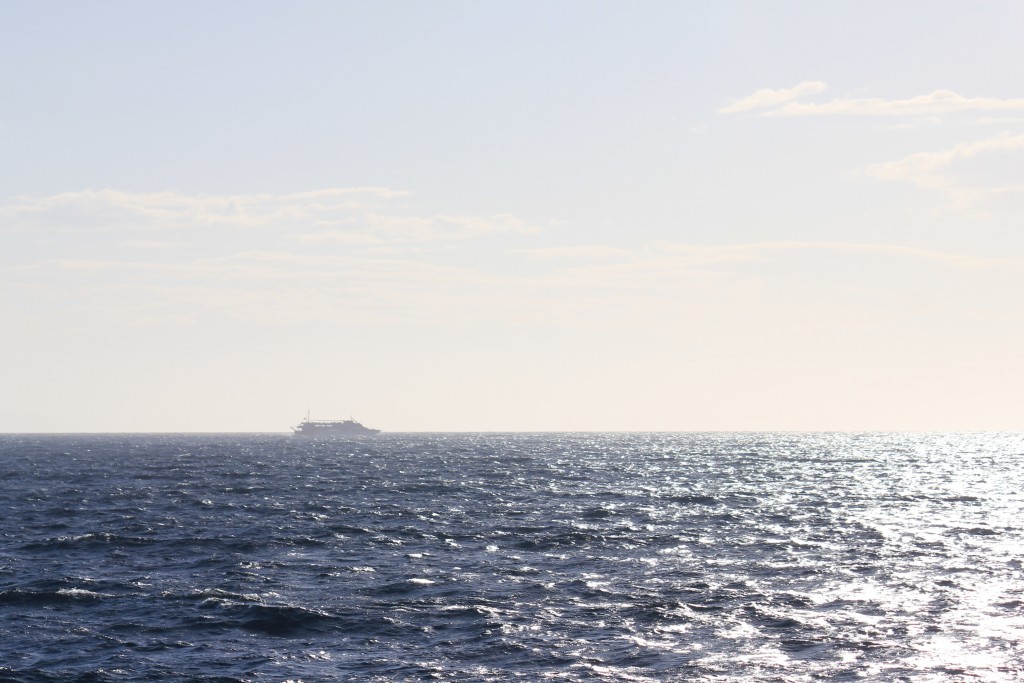 Ghost ship on the horizon!

We ran into some big waves and big winds once we were out in open waters. Many of the passengers, me included, were affected by different levels of sickness. I was able to quell my queasiness by standing out on the starboard side, face into the wind, allowing the chilly cool weather to cool off the intense heat my body was giving off in response to the nausea. Others were much worse off – two young women spent most of the way over down in the head (sea language for bathrooms).

As soon as we got behind the island, the waves and wind cooled off and we all went back to enjoying the sea, sun, and music. Next thing we knew, we were pulling into port.