Kalambaka, Greece – Our journey across Greece 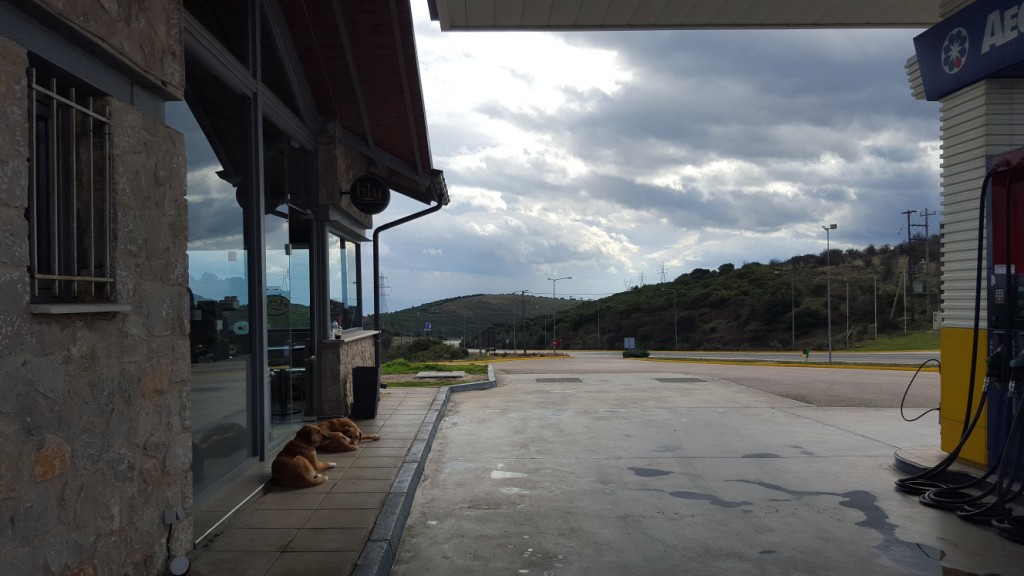 Kalambaka is the gateway to Meteora. It was burned to the ground by the Nazis in WWII, so the buildings are all from after that time. It will take us half the day to drive to, and by the time we get there. most of the monasteries will be closed. We plan to see the monasteries of Meteora tomorrow, so we need to spend the night in either Kalambaka or the nearby village of Kastraki.

Situated in the middle of Greece, the town of Kalambaka is a 4 hour drive from Athens or a 5 hour train ride. There are also tour buses that will take you up there on an overnight tour or 3 or 4 day tours that also include Delphi, or week long trips that take in more of the country. 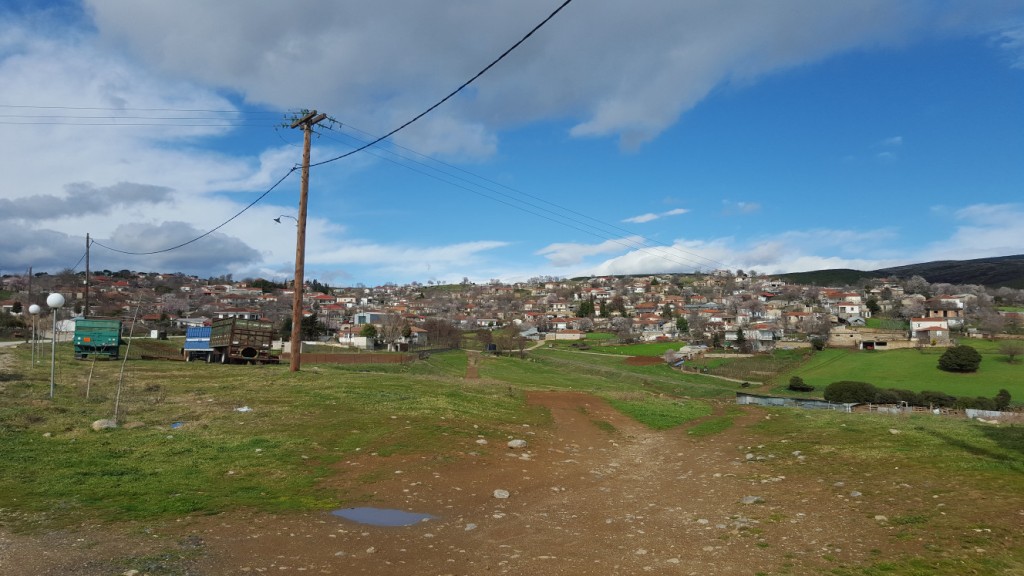 As I always do, I went through the hotel listings on TripAdvisor, and created a spreadsheet listing the prices, ratings, and good vs bad review ratios and created a Google Map so I could see all the locations. I settled on the Hotel Kaikis since the ratio of good to bad reviews was high, there were no reviews about the place having bedbugs, the price was very economical (40 Euro), and the location was pretty good, right on the main street. 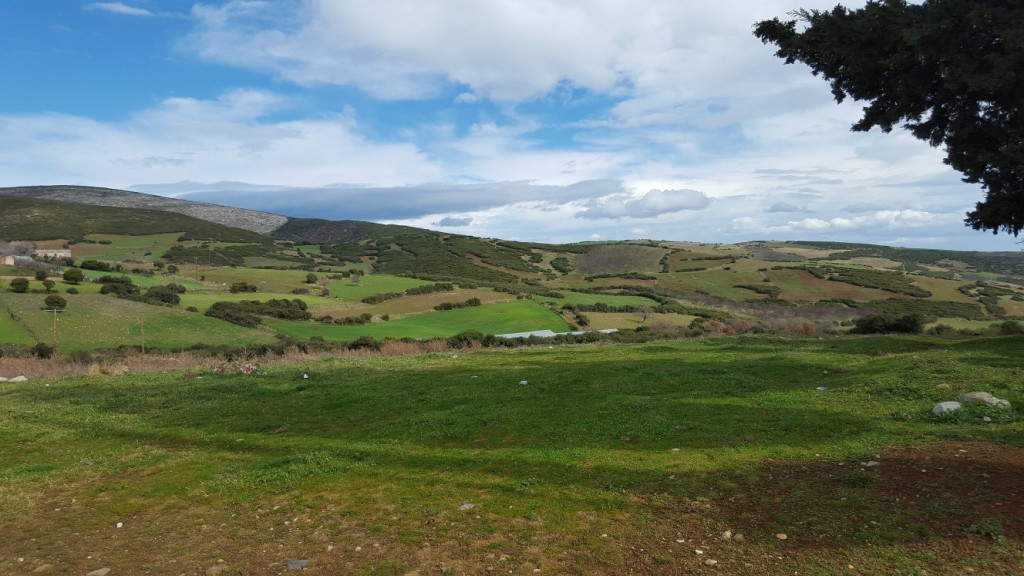 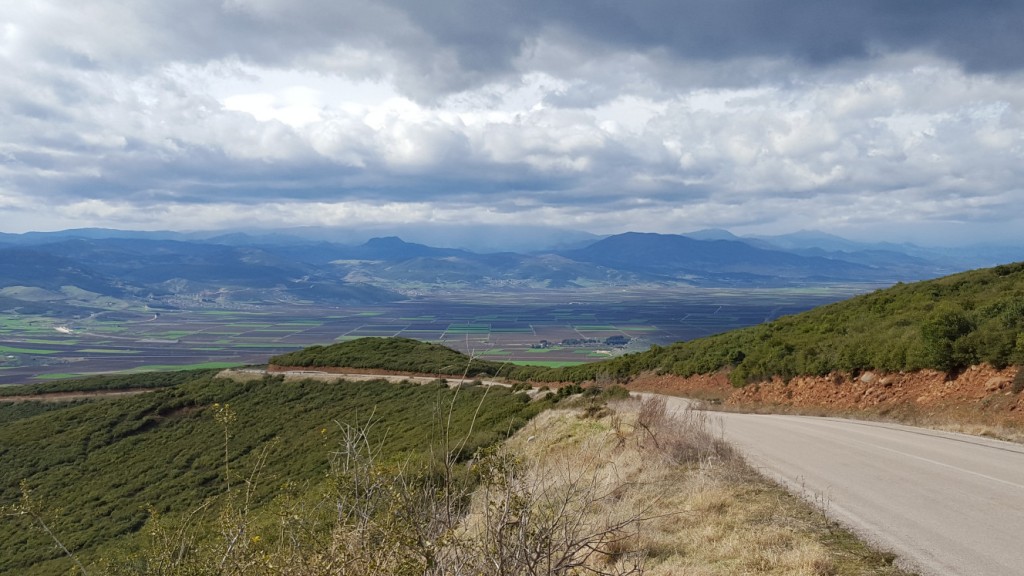 We chose to rent a car. Our last trip in November, we had only a few days to prepare before coming to Greece and didn’t realize until we were already here that an International Drivers License is required here. Easy enough to get at home  (before this trip , we walked into our local BCAA, and for $25 each, they took our pictures and handed us our 1 year paper licences) they are pretty impossible to get when already overseas unless you’re willing to wait 6 weeks. 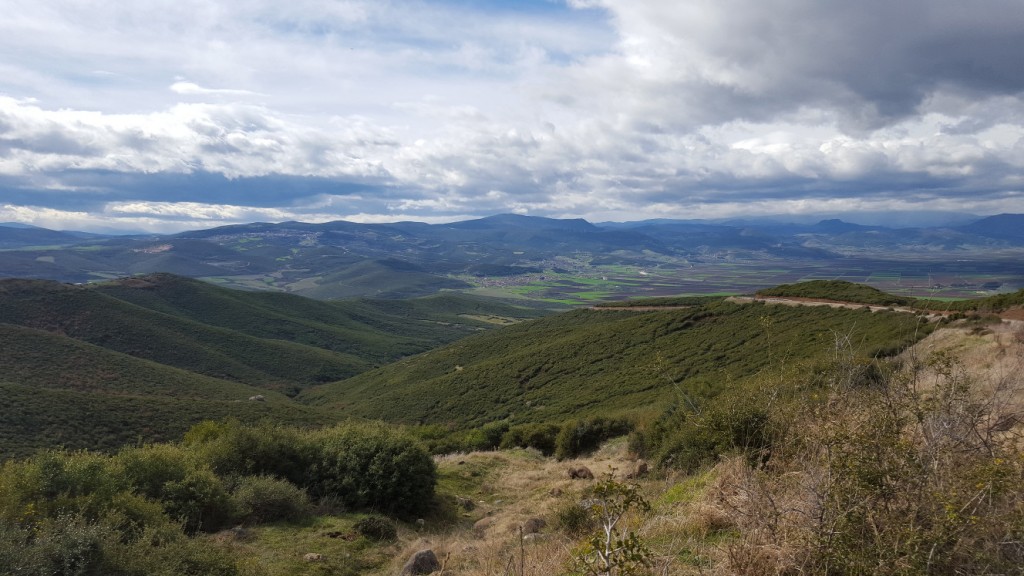 Greek drivers appear to be very speedy and dangerous when you first arrive here, but over time, you begin to acquire an appreciation for how they all watch out for each other and work together. Nobody will ever wave in thanks to you, it’s just expected that you will drive over on the side of the road if you aren’t going fast. If you are too submissive, then you are just asking to be overtaken or pushed out. The lines in the road are merely suggestions to the Greeks. A 4-lane road can easily be made into 6 or more lanes as necessary and everyone is keenly aware of where everyone else is and where they may go. I don’t have any sort of stats to provide, but in a month and a half in Greece, I have yet to see even one accident. 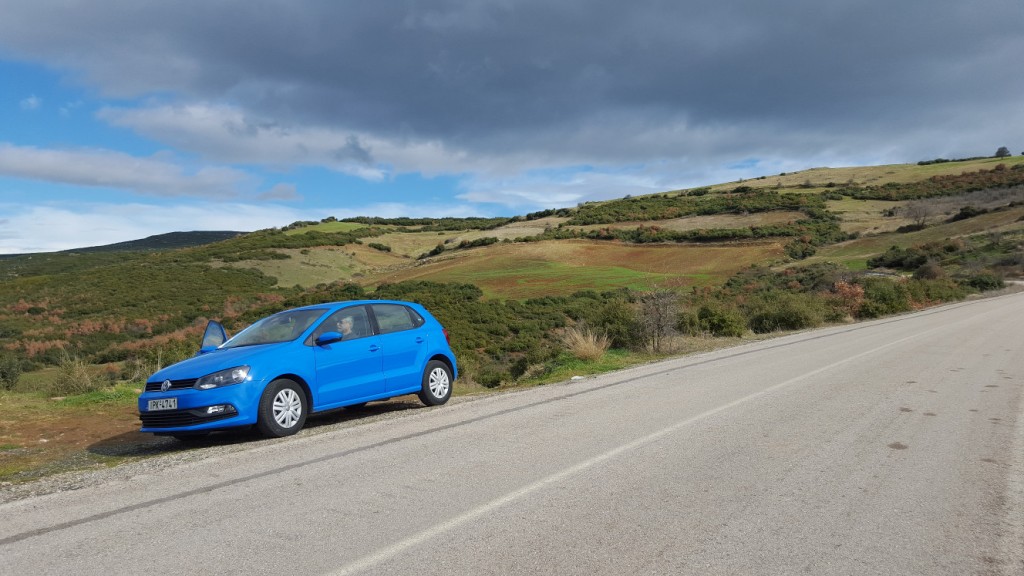 We chose to start our travels early Saturday morning instead of Friday evening, to be able to bypass the heavy traffic. On our way through Syntagma Square, we found it very sleepy and quiet. The signs were still up and the tents were there, but everyone was sleeping or at home. 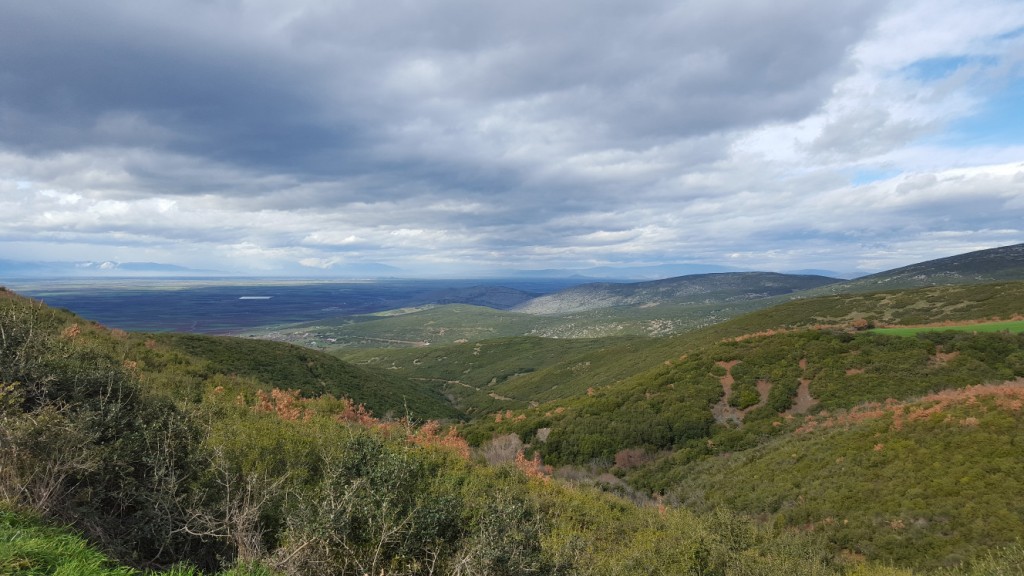 We made our way to the north of the city where we joined the highway. It was a mostly uneventful drive, broken up by stops at one toll booth after another. The tolls will end up costing us more than the diesel, even though fuel is much more expensive here than at home. The roads are nice and well tended, so it’s worth it, but it’s always more enjoyable when you get off the big highways, anywhere in the world. 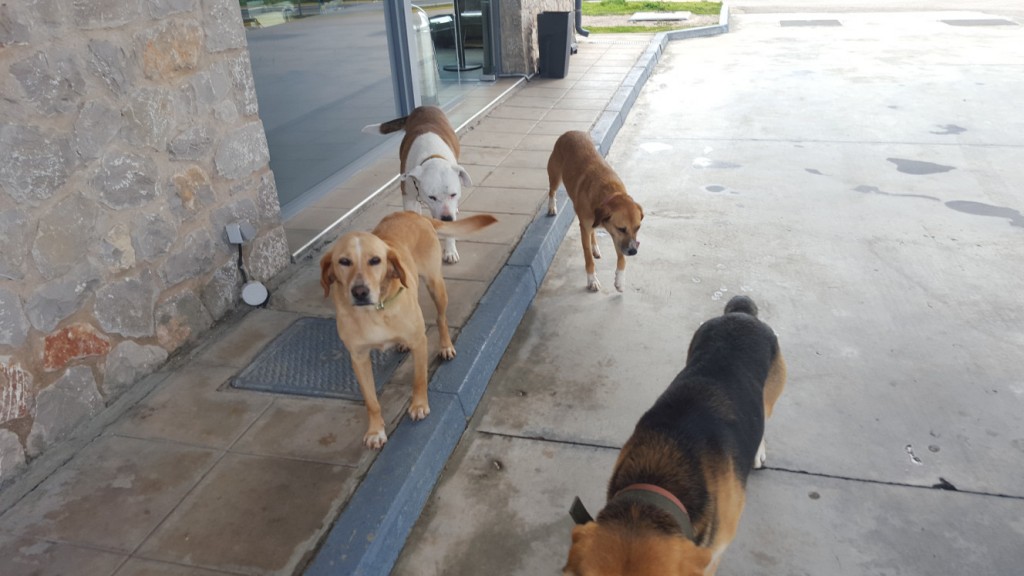 About half way there, we turned off the toll road and joined a smaller two lane highway. Soon after we stopped at a gas station for a break. As I got out of the car, two medium sized blonde mutts came up to meet me, wagging their tails. I was overjoyed and rubbed them all over exuberantly. But there’s more – next a shepherd half breed dog pushed in between them and relaxed against my legs, looking up at me with soft doe eyes full of love, so I spread my attention to the three of them. But that’s not all! A fourth dog, a large, muscled pit-bull hurried over, his back end bending back and forth with the weight of his shaking tail, and this guy made such noises! He was loud and noisy and demanding to be the centre of attention. The other 3 let him push his way in, and I couldn’t control my happiness and laughter. Finally, I have found Greek dogs who like me! 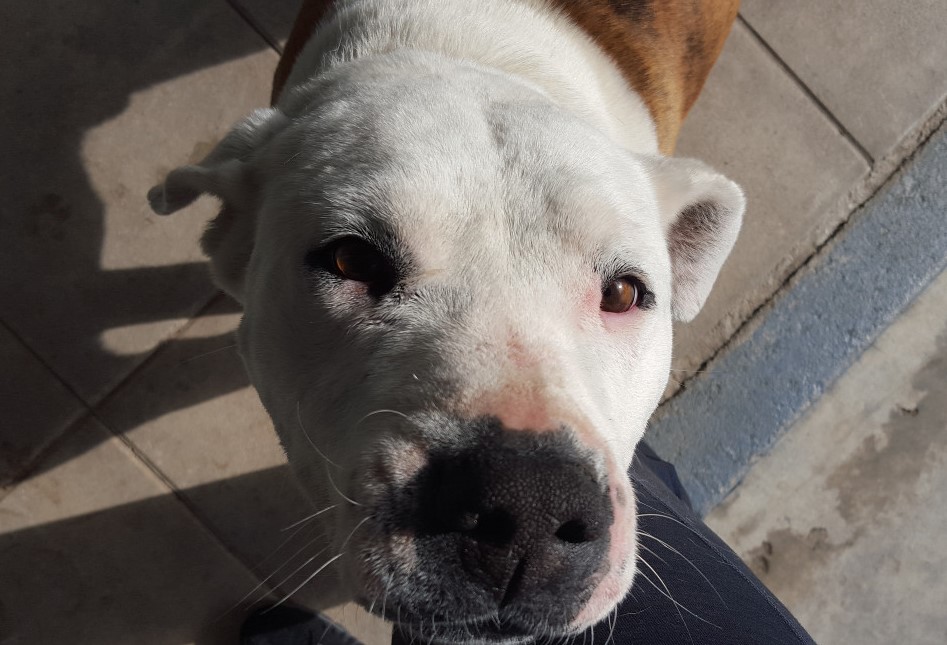 I eventually tore myself away from the foursome and they all went back to their spots. The two blondies laid down in the sun, the shepherd up on the sidewalk and the pitbull in the Queen spot, inside, on a big dog pillow. We ordered our cappuccinos, and it was just so wonderful. Even at a gas station, along the side of a highway, in the middle of nowhere, the coffee is amazing The cups are much too tiny however, but great things come in small packages. 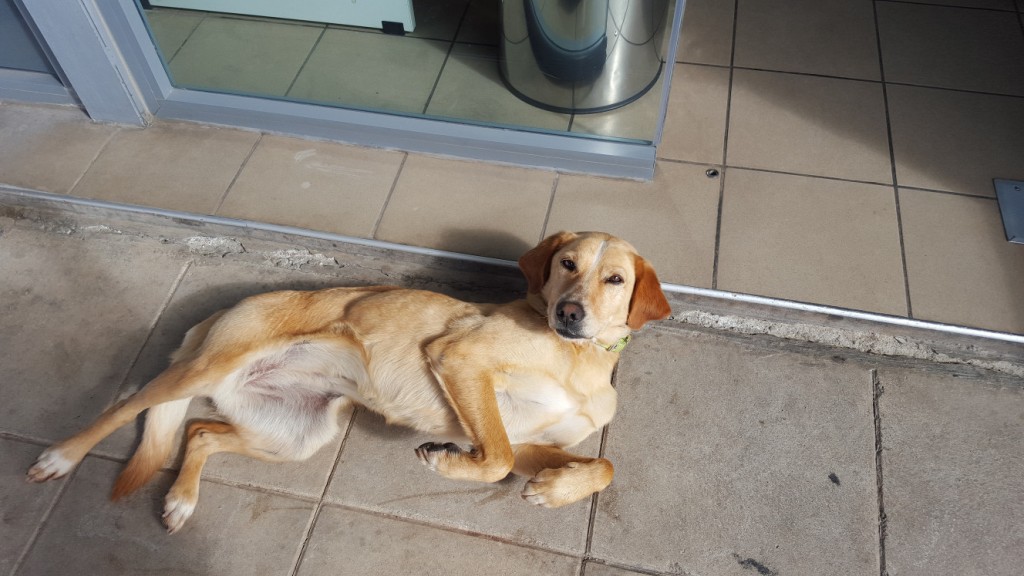 Once again outside, I leaned down to pat one of the blondies and she rolled over to let me rub her stomach. That lasts mere moments before the other 3 are back on me again. But I needed to take photos and I can’t do that while my hands are busy with them, so I got Harold to take over. As I held my hands up and away from them, he started rubbing one of the blondies, and the others one by one left me to go to him. The pit bull was once again the last, but he wasn’t about to wait his turn to get some attention. He grabbed Harold’s arm in his mouth, and pulled it off the other dogs while making the same loud demanding whiny groans as before. It was so much fun, and hard to leave them, but eventually we had to be back on the road. 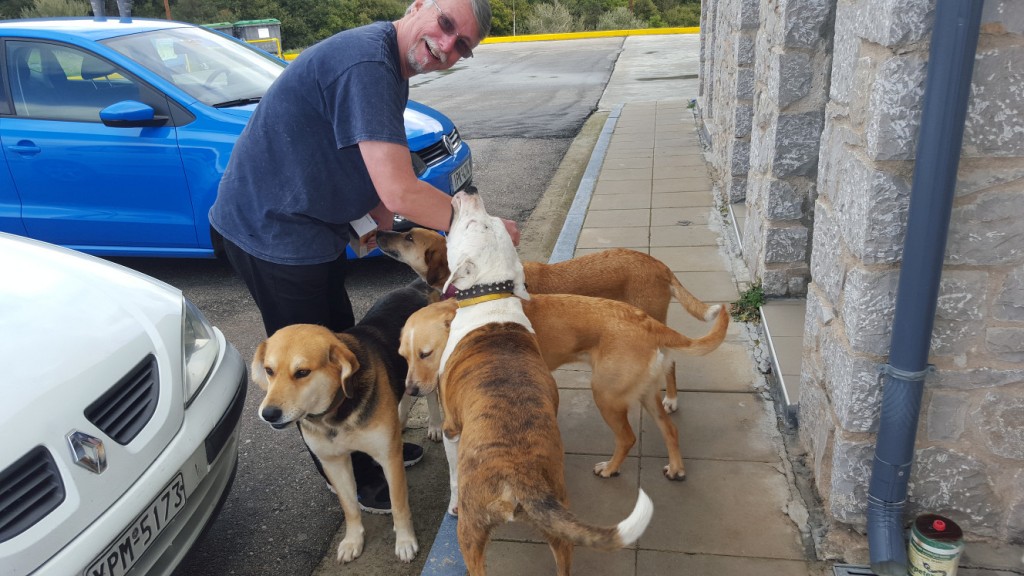 We had seen a number of tractors lined up in the very right lanes by some of the toll booths during the first half of our drive, but no road blocks. We figured we might be safe from them because it’s Saturday, and most of the farmers would be in Athens at the demonstration, but when we got to Domokos, the police headed us off on a detour. We could see some tractors in the road behind them. We figured the detour would just be a few roads around or something but instead it took us about an hour out of our way through the mountains. It was a beautiful drive though, so we couldn’t complain too much. 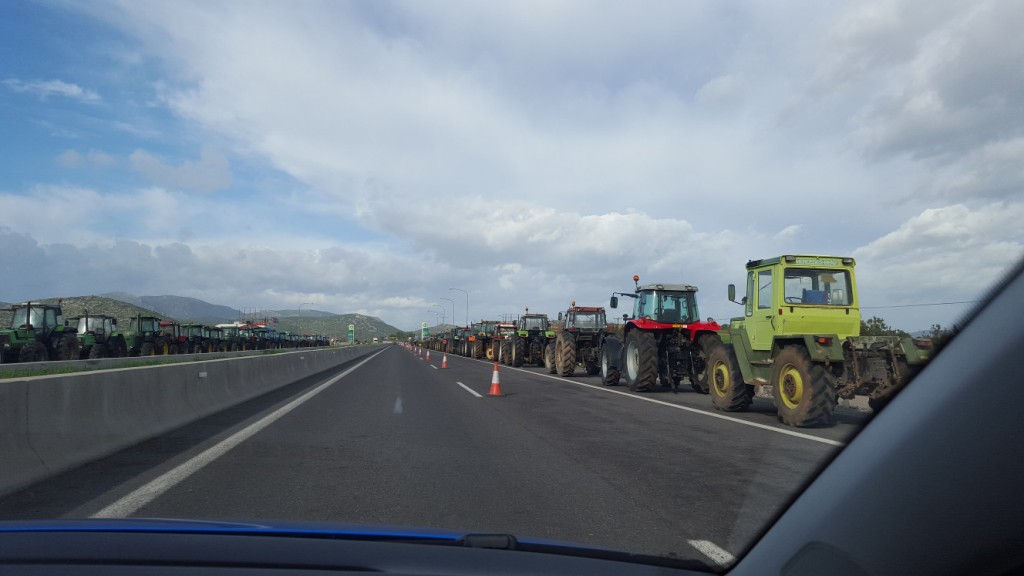 Eventually we made it to the hotel, but it was too late to visit the monasteries. We had a late lunch at a local, forgettable restaurant and then went for a hike in the hills. The town sits underneath the towering cliffs of Meteora and there are paths that you can hike all the way up to the monasteries, some dating back to the original hermit trails. Tomorrow we will go up to the top to see the monasteries. Today we will content ourselves with hiking up into the foothills. 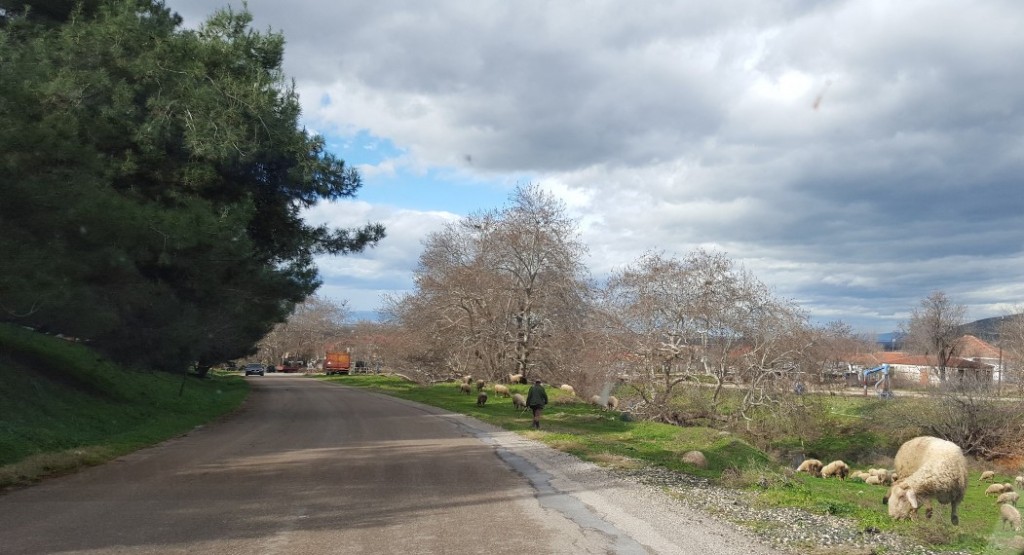 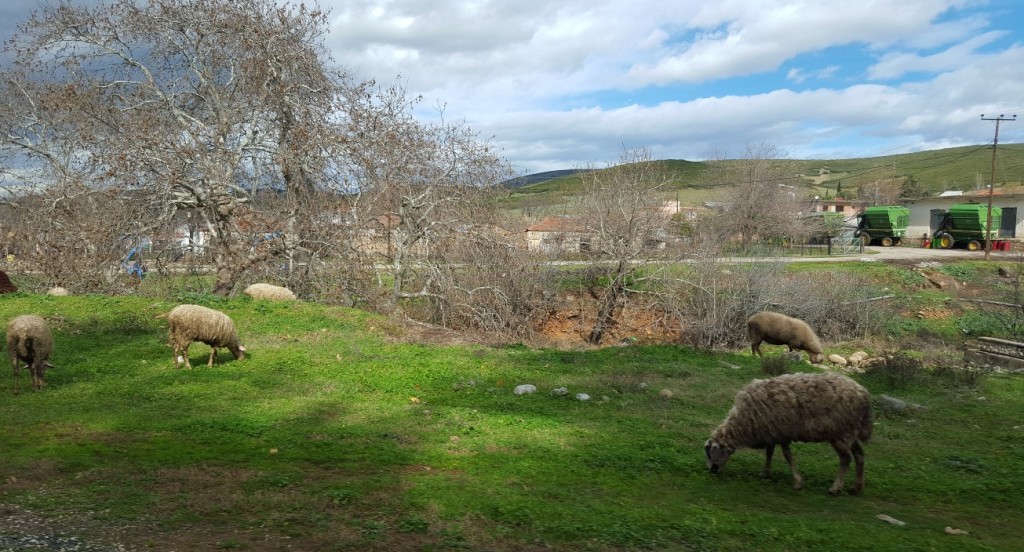 Unfortunately, though we had pretty nice weather all the way up here, it was not a very nice photo day in Kalambaka. It was a nice hiking day though – cool but mostly dry. We could hike in a t-shirt and rely on exertion keeping us warm. Well, I could. Harold opted for a thin jacket. 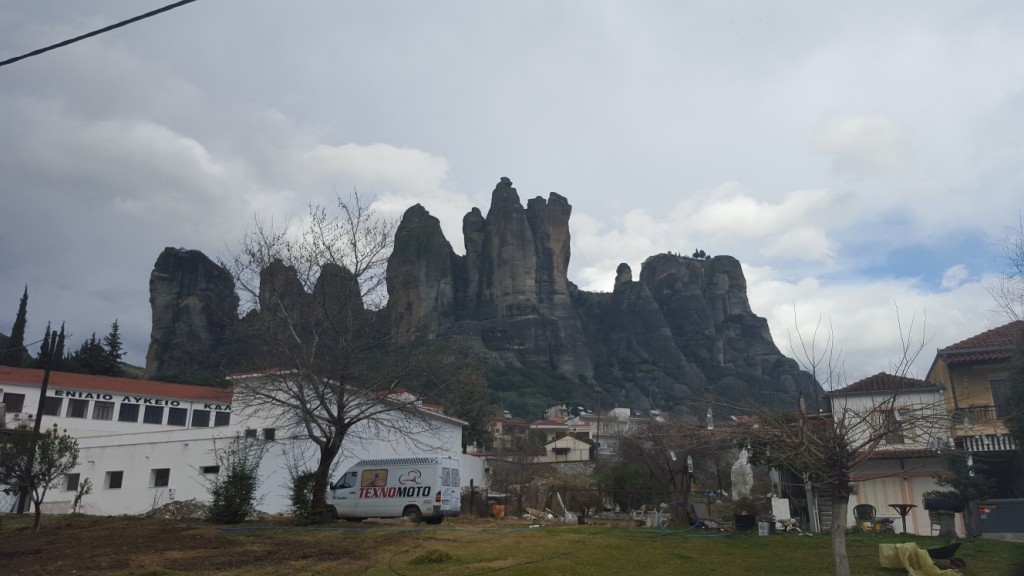 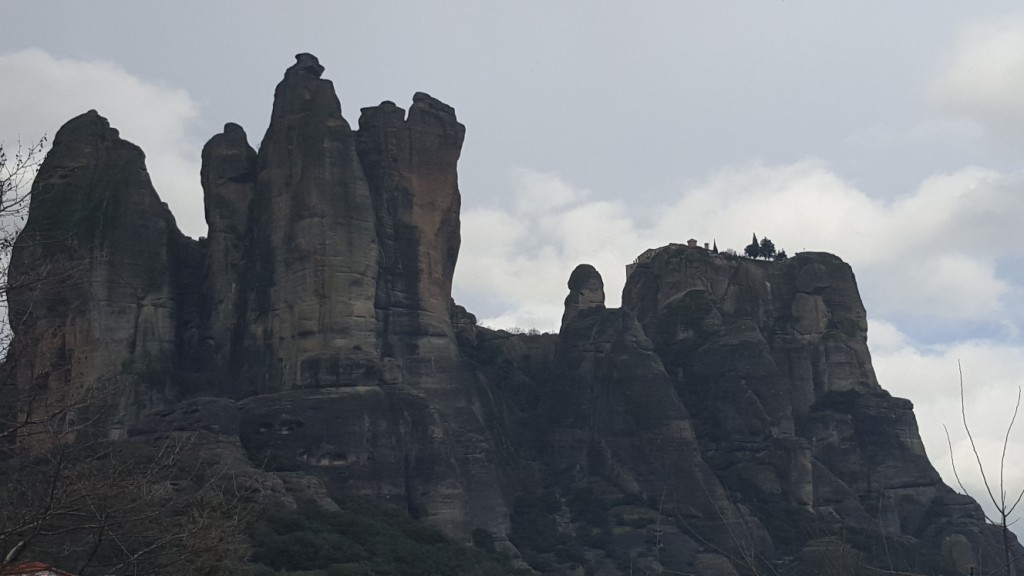 If you look closely at many of these photos you will see the monasteries built up top, but they are almost camouflaged and look part of the scenery. 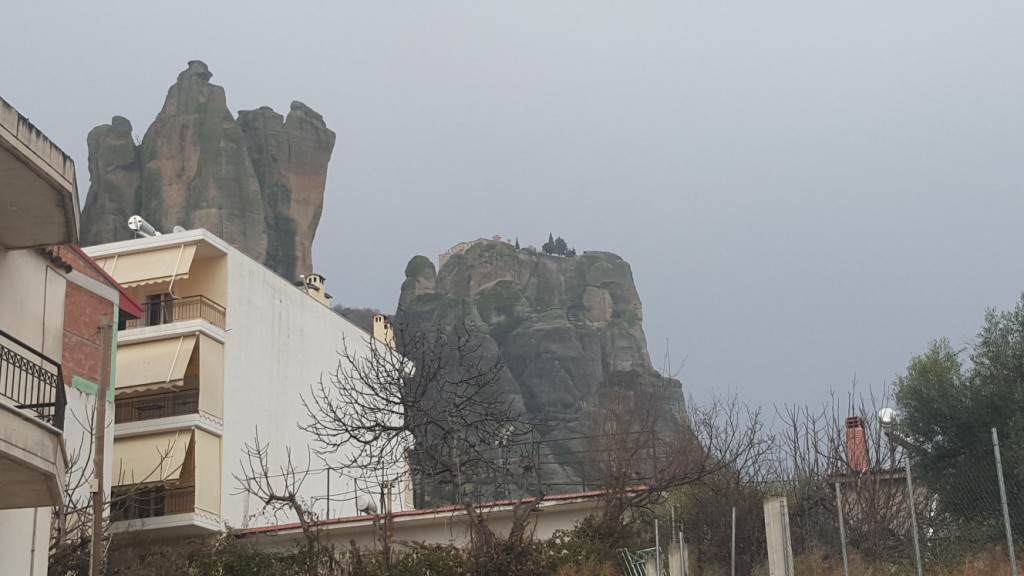 You can see a monastery more easily in this photo. 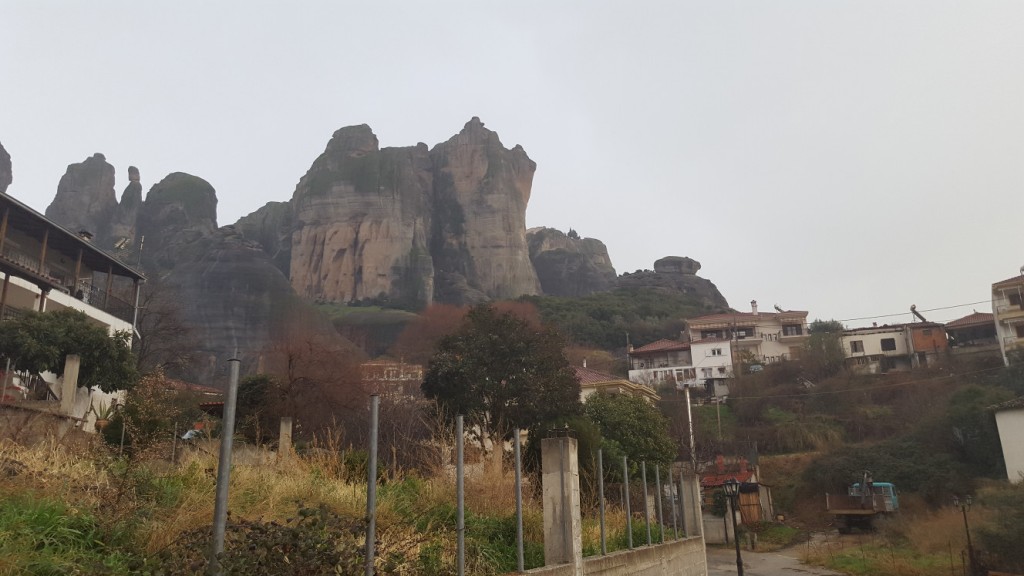 The architecture is much like you see in other parts of Europe and Asia that was heavily rebuilt after WWII. 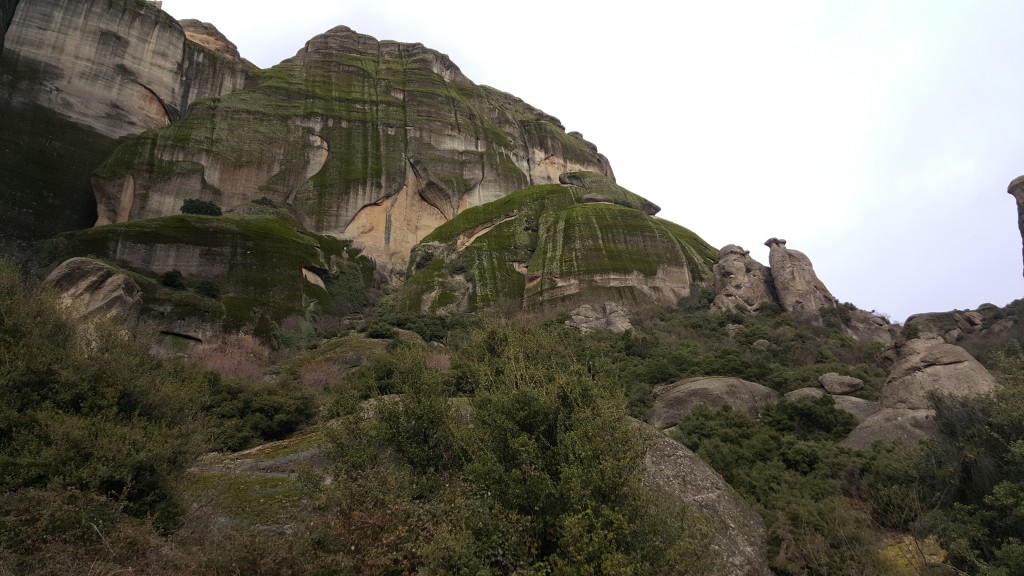 When we’re in places like this, I find myself thinking about how the locals mostly take the areas around them for granted. It’s human nature and makes sense. If we spent all our time in awe and appreciation of where we are, we’d never get anywhere else. 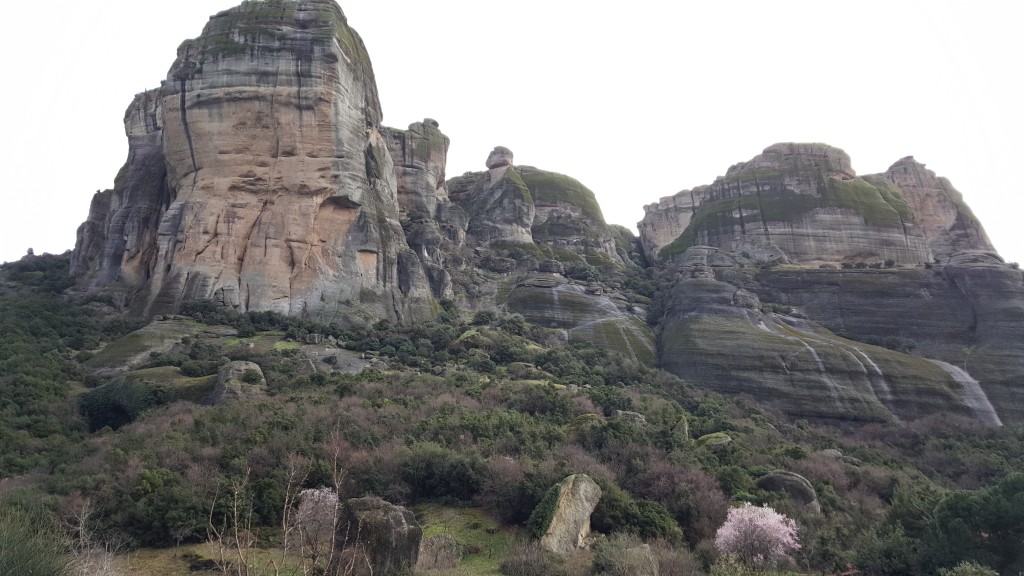 I know I do it myself – at home in Vancouver – but every so often I’ll look up at the mountains, or the ocean, out on the dykes, or out hiking, and realize how lucky we are to be in such a gorgeous place. 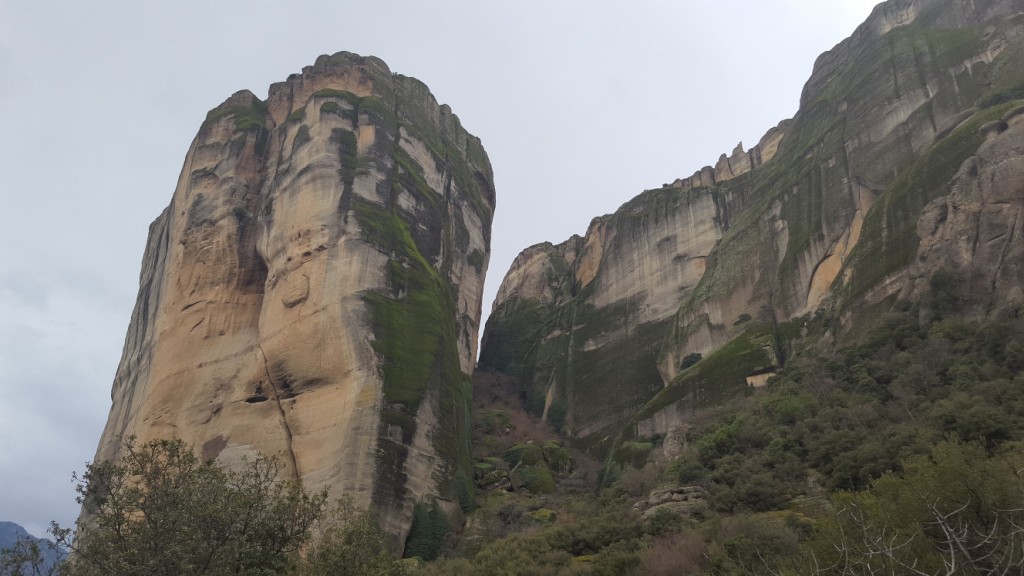 The act of going away makes me appreciate home that much more. I don’t miss home when I’m away, but looking at all this beauty around me, I can’t help but think of the beauty we also have at home.  When it’s time to go back, I’m always so excited to get there – as excited as I was to come here. 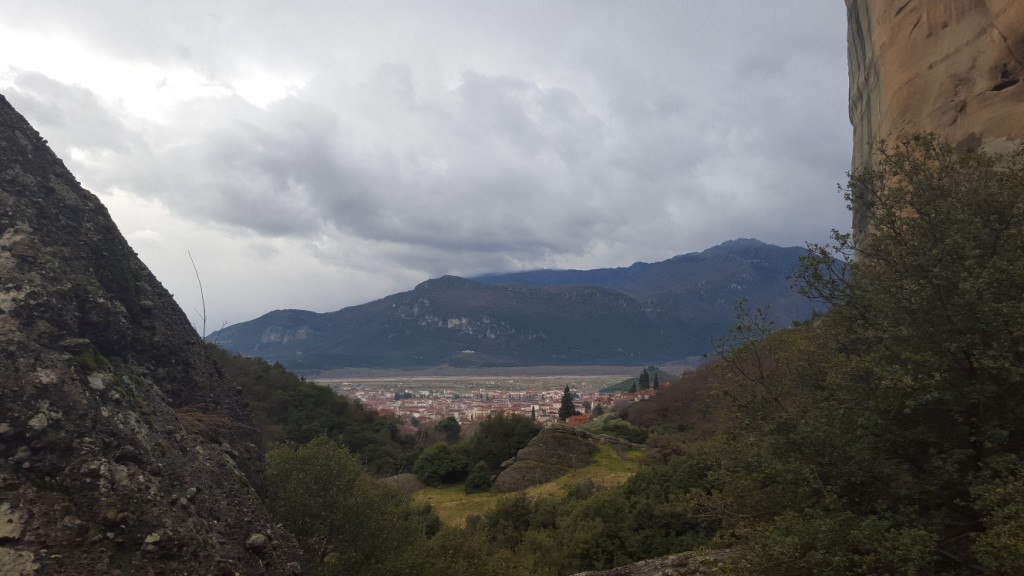 There is the town down below us. What we first thought to be very small turned out to be a sprawling town that merged into the village to the west and meandered way up into the hillsides. 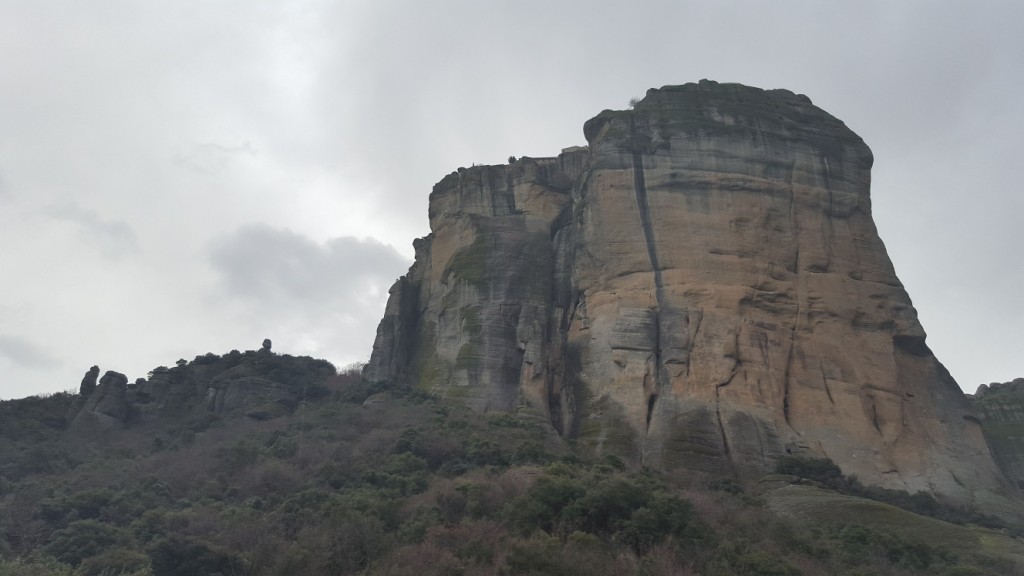 There is a monastery on the left side of this cliff but the photo is quite dark and hard to see. Click the image for a larger version. 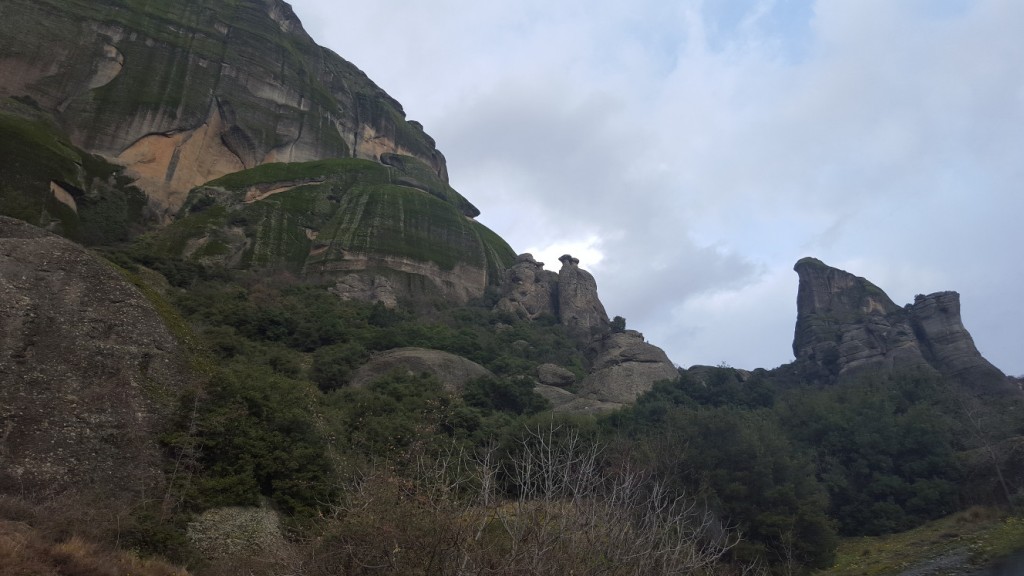 Even without the monasteries, this place is mystical and breathtaking. I can understand the allure to the hermits – all cut off from the rest of people, with these gorgeous vistas both up and down. 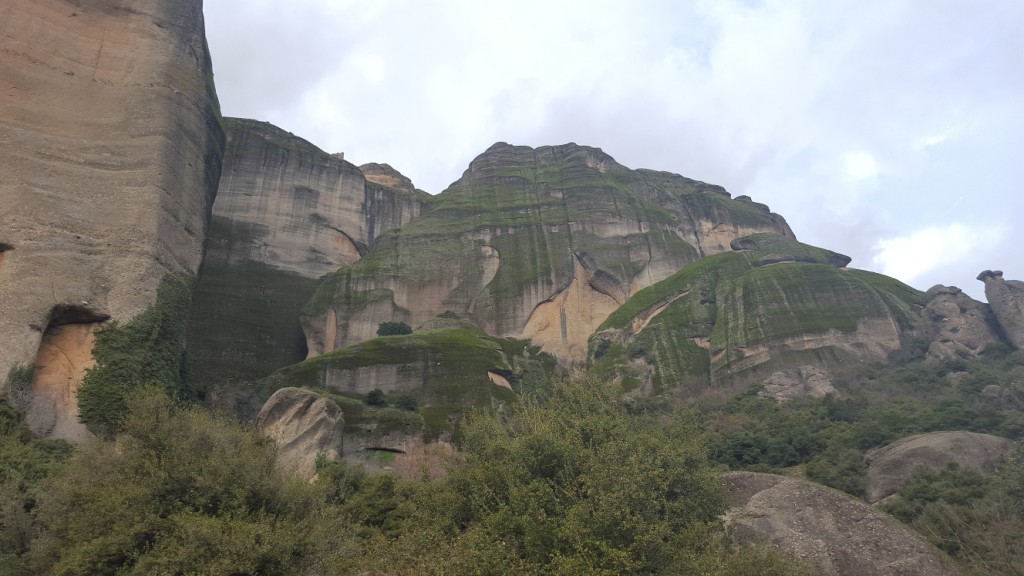 We were pretty much all alone out here. Living in BC, we learn to never let a little rain or grey skies stop us from going outside. People in sunnier climates tend to look at days like this as days to catch up on inside stuff. 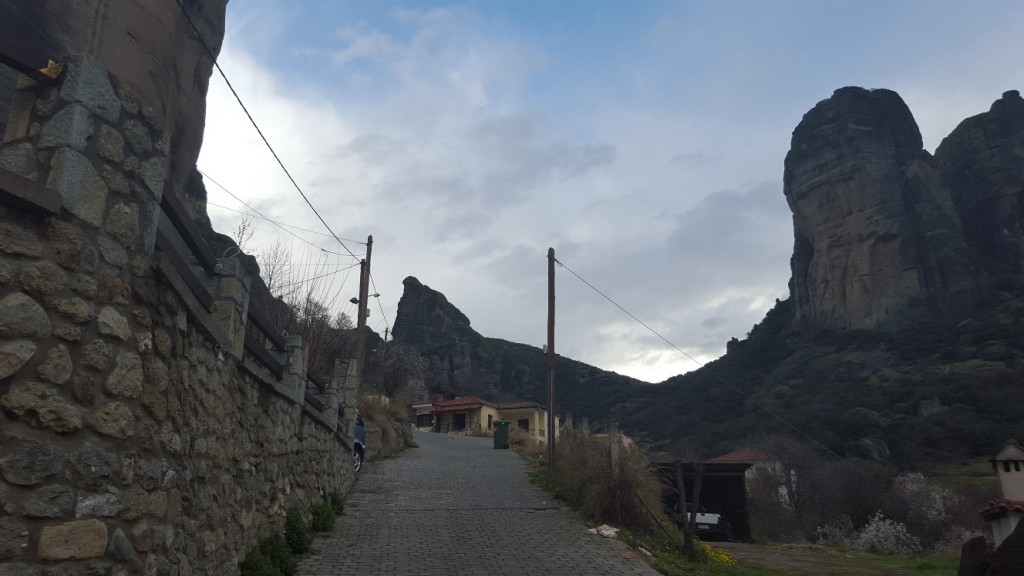 The town itself reminds me of the Cameron Highlands in Malaysia. Burned to the ground by the Nazis in WWII,  the architecture is all from after the war. That was a period of massive rebuilding and often beauty was pushed to the wayside in the process of getting enough built to house people and businesses. 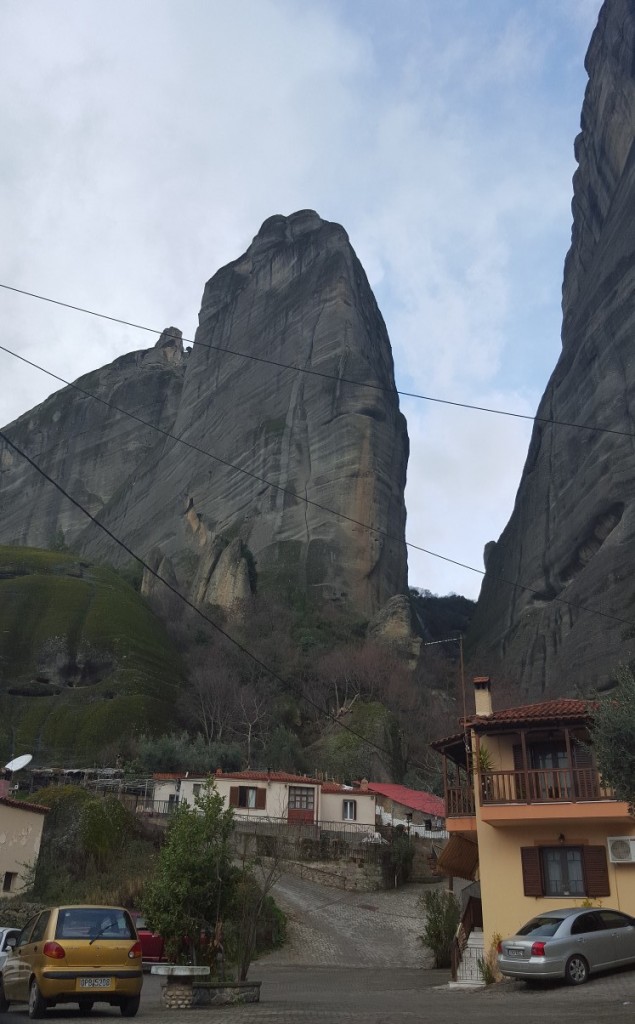 Kalambaka crawls right up and around the cliffs, into the foothills. 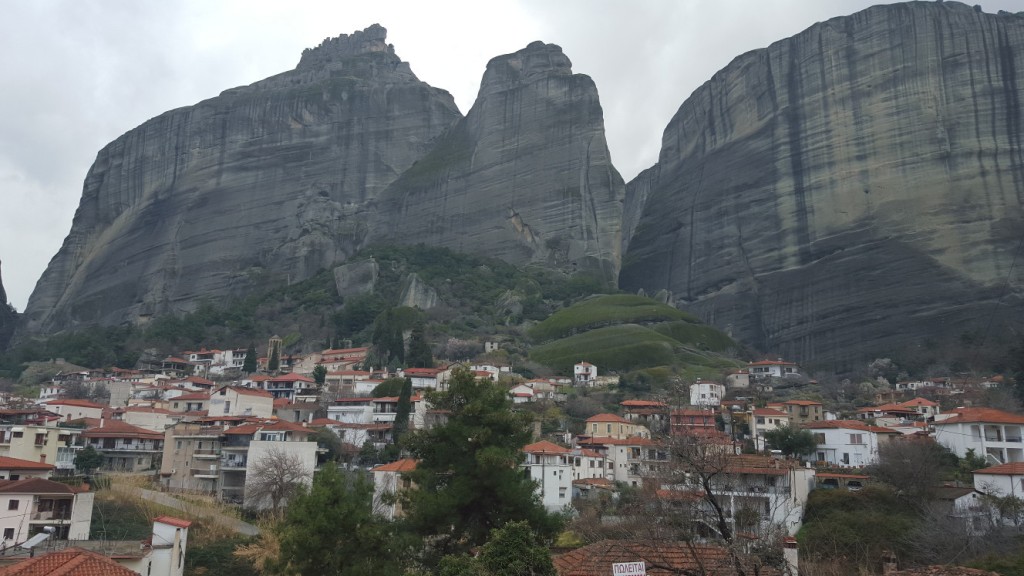 Overnight spot: Hotel Kaikis
Price: 40 Euro
Includes: breakfast, wifi
Notes: The hotel is dated, but clean, and the views of the cliffs of Meteora are outstanding. The woman at check-in gave us a map of the area and went over the must see places with me. Breakfast was fantastic. In season, they have a buffet, but there were only a few people staying here so we each had our own tables and the server brought out a veritable bounty of food – way too much for us to eat.