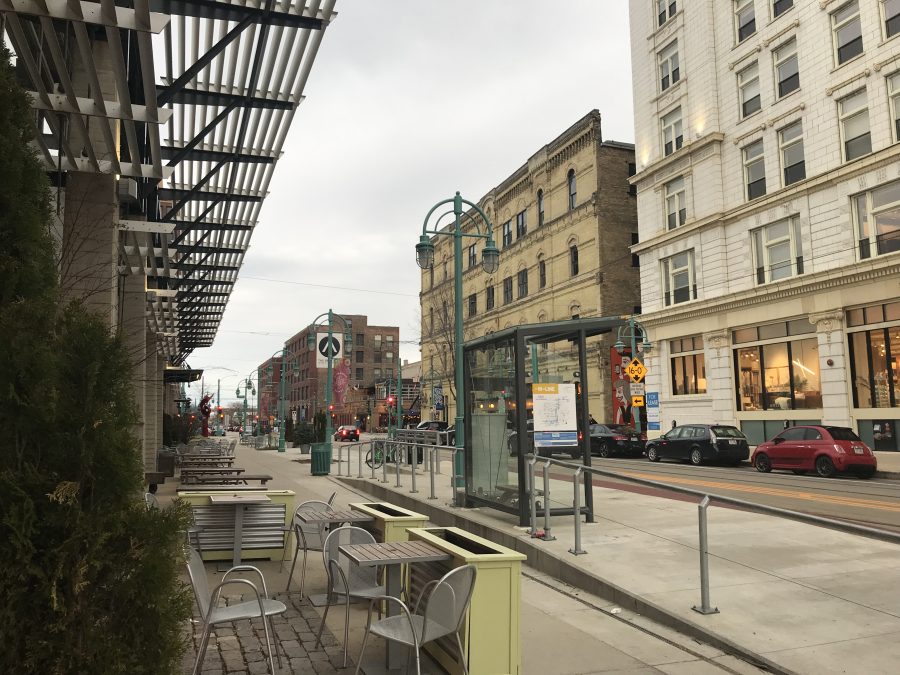 We stayed at the Wisconsin State Fair RV park. It’s really nothing to write home about, but it’s a good price ($40) for full hookups and just a short 3 miles from downtown. We took the dogs on a long walk all through the closed fairgrounds, expecting to be kicked out at some point but our only touches with authority were a security guard waving at us as he drove past in a golf cart and the police practicing their high speed chases around the track.

Later in the afternoon, we headed downtown where we wandered around the “Historic Third Ward”. In the early years of Milwaukee, the area was a swamp. Irish immigrants were the first to settle here, and it became known as the “Bloody Third” due to all the fist fights that went on there.

Most of the Third burned to the ground in 1892 in a fire that started in the Water Street Union Oil & Paint Co. This made way for a building boom that created a harmonious balance of buildings that complemented each other. During this time, Italian immigrants began to move in and take over the area.

In the 1960s, highway construction came right through here and the area fell into a slump. People moved to the suburbs, and forgot the Third. It wasn’t until the 2000’s that the area experienced a renaissance, but today it is a pleasant area full of street art, loft apartments, shops, bars and restaurants.

We were pleasantly surprised to find a Vegan Korean happy hour a block in from the river, where we enjoyed Cauliflower in the most amazing Shishito sauce we dipped our Togaroshi Fries in, not wanting to waste a drop. We followed up with our first ever, but not to be our last for sure, grilled avocado. The wine was great, worth much more than the $5 happy hour price.

After our dinner, we wandered more of the area along the river before finding the Public Market where they had a number of bars and restaurants, ending our evening at a busy little wine bar.